Krabi, Thailand: What to see and how to get there

Krabi province, on the west coast of southern Thailand, is a beautiful area that includes more than 100 islands and boasts cliffs overlooking the sea, beaches of rare beauty, and mangrove forests.

Its capital, itself called Krabi, is about 800 km from Bangkok and 250 km from the border with Malaysia. This area is at the mouth of a river called, you guessed it, Krabi! Let’s learn more about this attractive place.

The location shows the typical climate of this area of the country, which is a humid-tropical heat with high temperatures throughout the year. The best time to visit Krabi, of course, is between November and March. In fact, in this season the temperature rarely exceeds 30 C . Not recommended, however, is the rainy season from April to June, as it is characterized by frequent thunderstorms and showers. 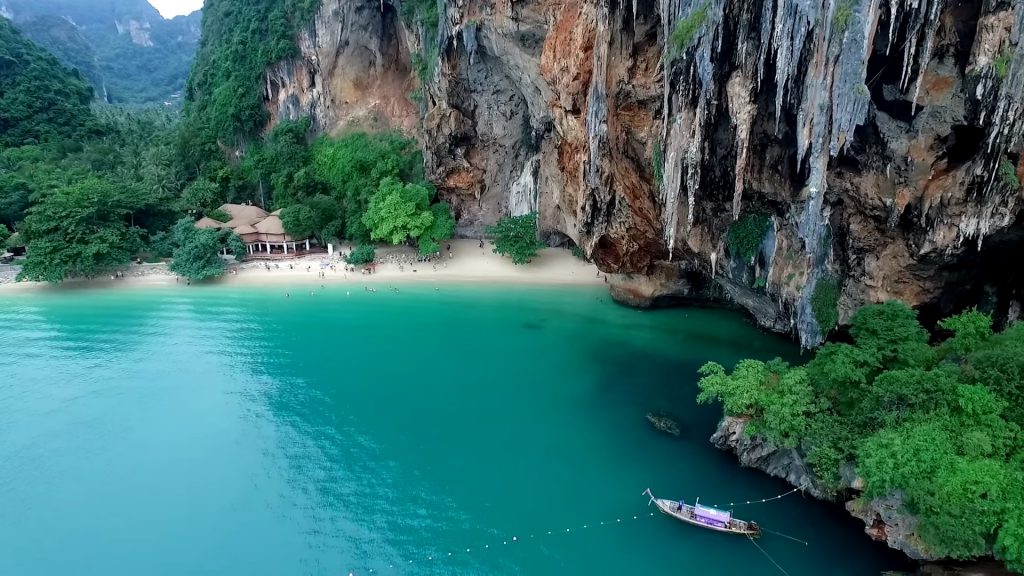 There are about 450,000 inhabitants in Krabi province; about 50,000 of them live in Krabi City and are predominantly Muslim. You will find yourself facing a multi-ethnic reality in which different ethnic groups and religions coexist beautifully and are very open to foreign visitors.

The city has its own international airport where various scheduled and budget airlines land. Built in 1999, it is located about 15 km from the center and is easily accessible by cab, bus and minivan. The airport connects Krabi to various cities in Thailand and to other countries such as Malaysia, Singapore, Australia, China, and Russia.

The most interesting places to see

Krabi Town is not very big, and most of the attractions are outside its administrative boundaries. In fact, this city does not directly face the sea, but is located near the mouth of the river. Therefore, to find interesting beaches, you will definitely have to move to the south or northwest . 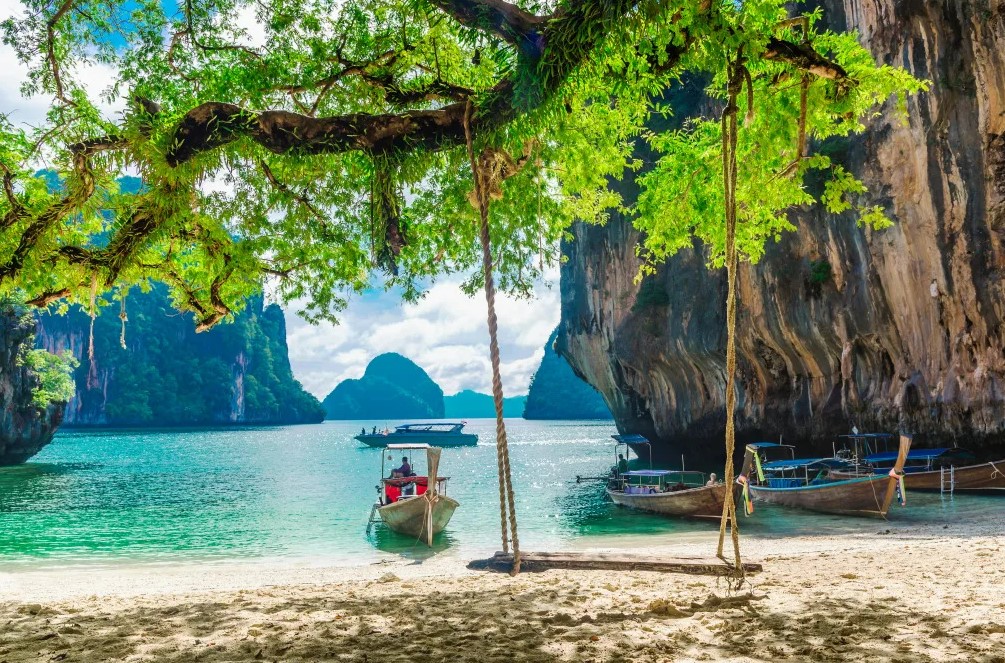 The most interesting places to see

Nearby in Krabi town you can immerse yourself in unspoiled wilderness by visiting Hat Thara Marine Park, which is located near the bay of the same name. Here you’ll find tropical plants, trees, and fauna, including protected species like sharks and dolphins.

As you enter town you can also visit the two hills of Khao Khanap Nam, which rise above the river that crosses Krabi from above. They are covered with dense jungle, and here you can admire the very ancient caves, rich in truly spectacular limestone formations. They can only be reached by rented boats.

Also very interesting is the Buddhist temple Wat Tham Sua, known as the Cave of the Tiger. This religious site was built next to a large rainforest near the center of Krabi City. It includes a long staircase with more than a thousand steps, at the top of which you can admire a large golden Buddha and see the city from above. 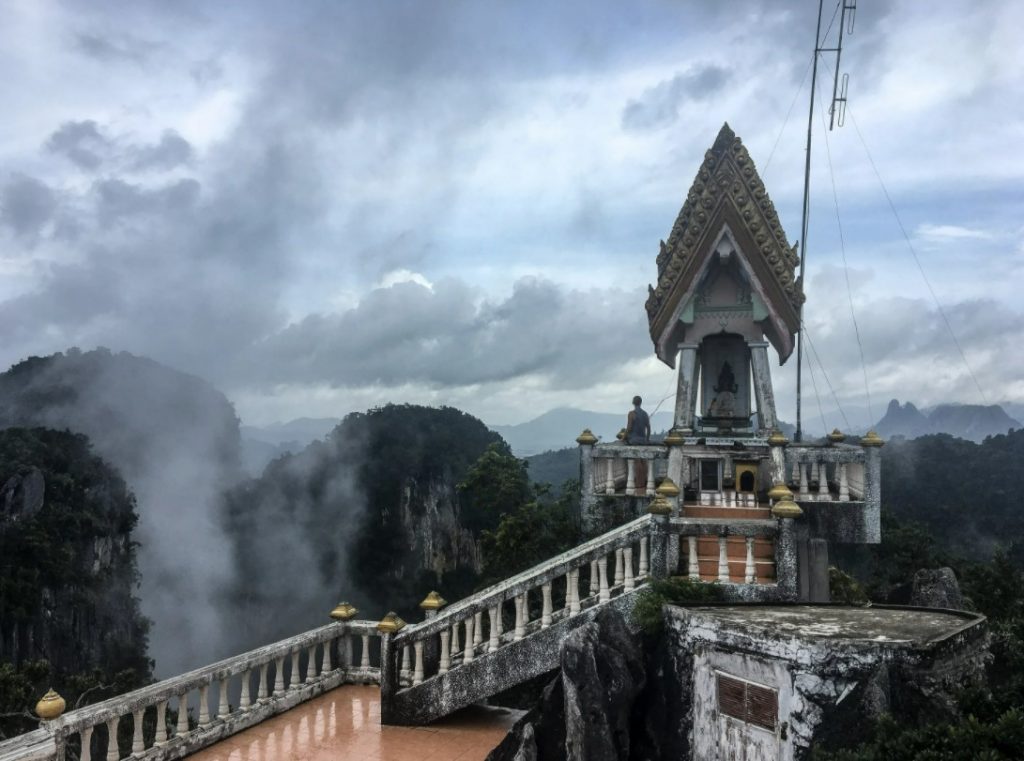 And if you want to learn about the traditions and culture of the place, visit the Andaman Museum, an exhibition complex that showcases the techniques of pearl processing and the materials used to create jewelry.

Nearby is the Andaman Cultural Studies Center, which contains art by local artists.

However, to eat, you have a wide choice as there are several restaurants, bars and street food stalls .

At the crossroads between Uttarakhit and Maharaj is Krabi’s main market, where you can find spices, Thai delicacies and the famous golden mango, a typical product of the province.

If you’re brave enough, you can try the classic fried insects or reassure yourself by trying pad thai, papaya salad and kanom jen. 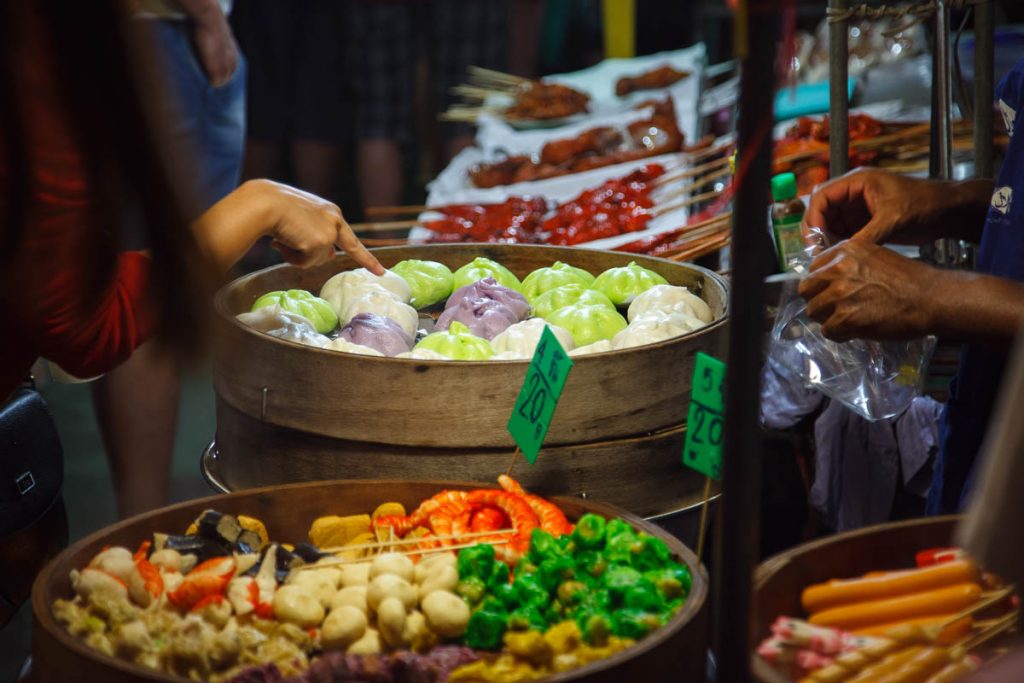 Krabi City is the perfect starting point for exploring its large province that includes beaches, islands, archipelagos and nature reserves of rare beauty.

The most important coastline is represented by Ao Nang Beach. It is located about 20 kilometers from Krabi City and is full of hotels, guest houses, restaurants and snorkeling spots. It is also an area full of stores and malls where you can buy everything you need .

Another beach you can not miss is Phra Nang, known for its jagged cape of rocks overlooking the sea. This is the perfect place if you are a fan of trekking and rock climbing. 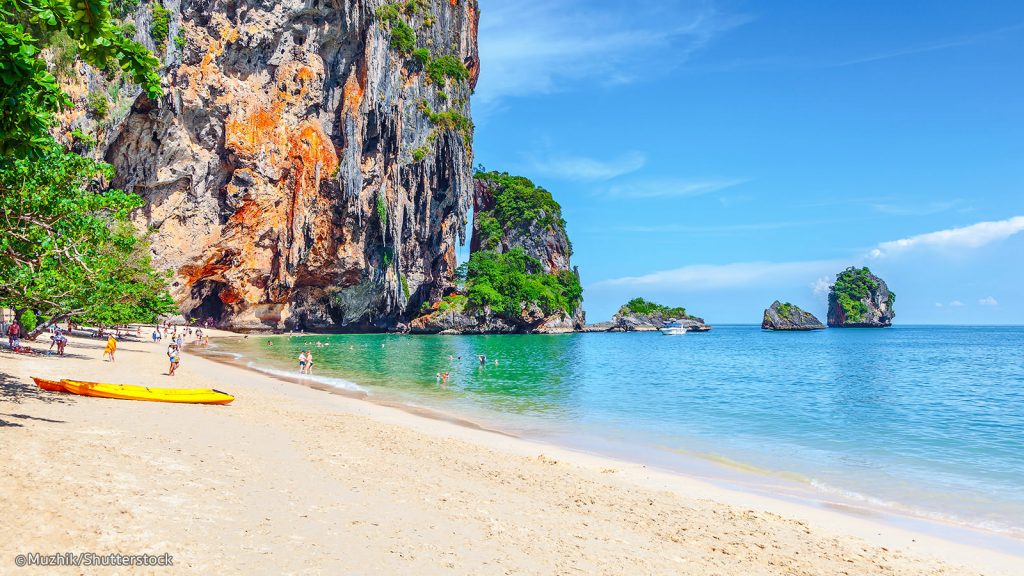 In the southern part is Tham Phra Nang Nok Cave, which you can visit with the help of local guides.

Also fascinating is Nopparat Tara , a coastline 17 km from Krabi City , which is characterized by its white sand and lots of shells that you can admire along the shore.

On the other hand, between Ao Nang Beach and Krabi Town is the Raleigh Peninsula which can only be reached by boat.

The main beaches are East Raleigh, West Raleigh and Ton Sai. The latter is a favorite of mountain climbers, and East Raleigh is the busiest tourist spot. 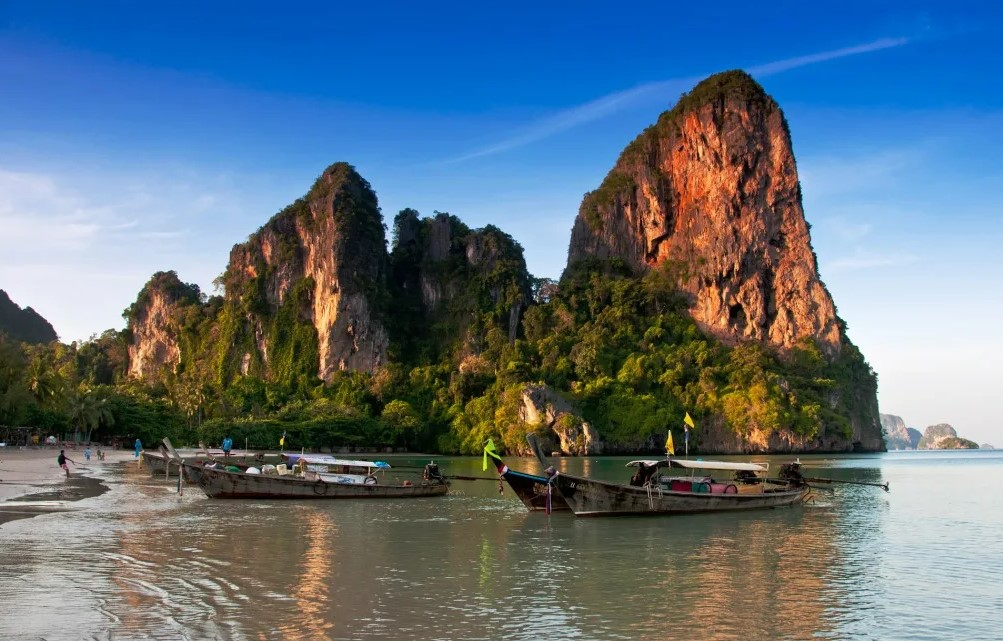 From Krabi City you can also go on excursions to nearby atolls .

In particular, the Hong Archipelago, a group of islets with beaches, coral reefs and a large variety of ichthyofauna. It is an ideal place for sports enthusiasts, who can go kayaking and canoeing.

The most coveted tour, however, is the four islands, four islands in front of the Rails, which can be reached in 25 minutes by boat. The tour usually lasts all day and the guide will let you go snorkeling and diving.

Another destination among the most popular in Krabi province is undoubtedly Phi Phi Island, an archipelago 40 kilometers from Krabi town. Consisting of six islands, it is a rugged area with picturesque bays where you can swim, play sports and photograph many kinds of tropical animals and plants. 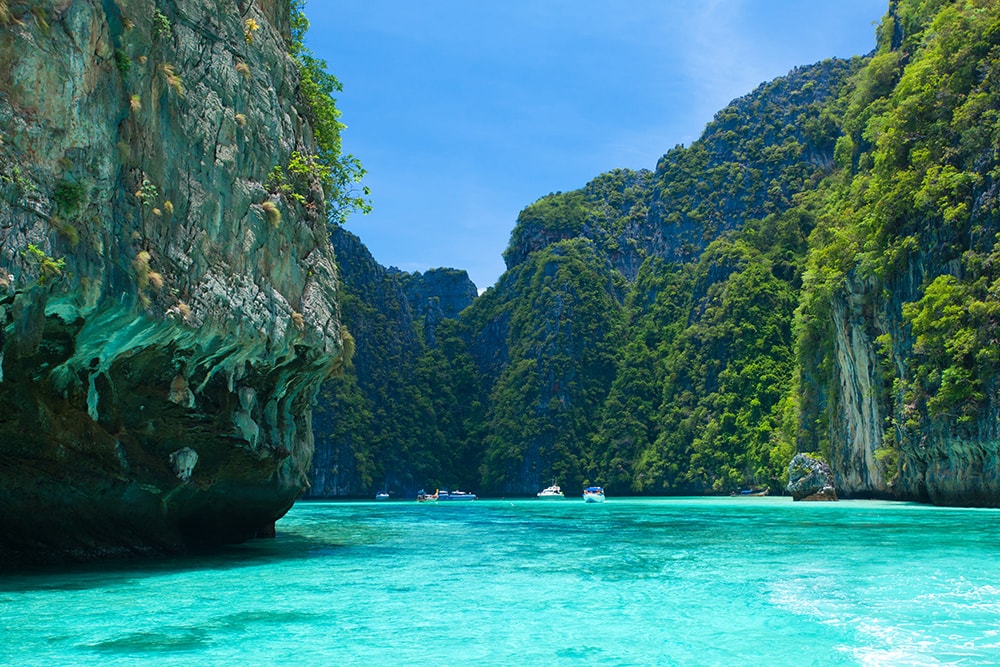 What to see nearby

The small town of Krabi is about 180 kilometers from Phuket Island, which is relatively easy to reach by bus, shuttle, cab, ferry, and even speedboat.

In addition, the neighboring province of Trang can be reached by ferry, the crossing which takes about three hours. The boat leaves from Klong Jirad Pier in Krabi and arrives at Trang’s Hat Yao Pier. 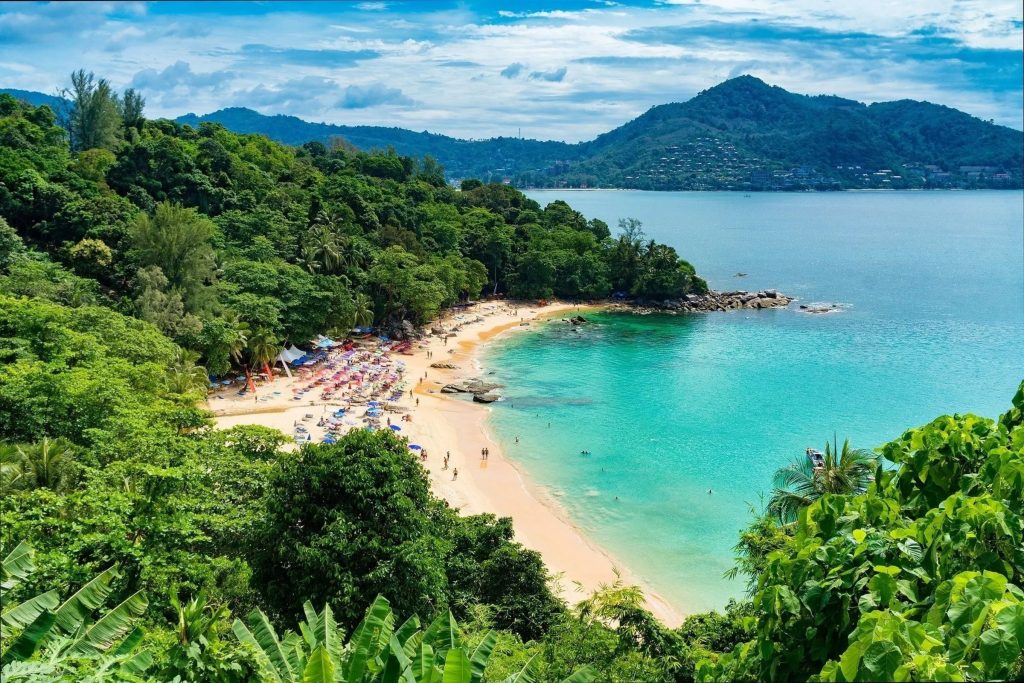 What to see nearby