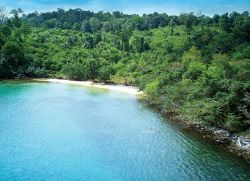 Koh Rong (also pronounced Khao Rong) is one of the islands in the Gulf of Thailand, the largest island in Cambodia. Koh Rong is about 30 kilometers from the main island. It is formed by two mountain ranges and picturesque plain, nestled between them. The area of the island is 78 kilometers, the length of the coastline – 61 kilometers.

The island used to be a pirate shelter (by the way, its name translates as “Shelter Island”), so it’s quite possible that somewhere on it there is a hidden pirate treasure, and maybe even more than one. However, even without the pirate treasures, the island has something to attract the attention of tourists all who have visited Koh Rong at least once, says unanimously: it’s just a paradise on earth. Here are some of the best beaches in Cambodia with snow-white sand, fine as starch, transparent water, through which you can see the bottom, even at a depth of 10 meters, rich and vivid colors of local wild vegetation, an abundance of fragrant and delicious fruits – all this gives the island an indescribable charm.

The first villages on the island appeared only in 2000; today there are 4 of them, all located on the coast of the island. Most of the locals (about 70%) live off fishing.

Due to the particular purity and transparency of the water Koh Rong attracts a large number of diving enthusiasts. The best beach of Koh Rong, M’Pay Bay, is one of the top 10 beaches in the world. Its length is 5 kilometers. This beach has amenities such as cafes and guest houses. The total length of the island’s beaches is 43 kilometers; they are separated from each other by cliffs, so Koh Rong is considered a great place for a beach vacation in Cambodia.

The dunes separate the beaches from the inner part of the island, overgrown with large areas of jungle. The center of the island deserves special attention – here you can see beautiful examples of native vegetation, including many coconut palms, and very beautiful waterfalls. The largest is called Saracen Bay and is located in the bay of the same name. The waterfall is multi-cascading, it flows into a pool in which tourists love to swim. By the way, when walking through the jungle you can meet deer, elephants and even leopards.

In the bay at the southern end of the island, near the largest fishing village of Koh Touch, you can admire the most beautiful coral reefs. In the village is a diving center, where you can not only rent the necessary equipment, but also to undergo training. Near Koh Touch is another local attraction – a clam farm, where you can try the freshest oysters. By the way, the southern coast is the most picturesque, but also the least developed.

Koh Rong Island – the most rainfall-abundant area of Cambodia, so you should not visit it in the rainiest months (this is August and September).

On Koh Rong there is a ropes park located right in the jungle. It is called High Point. The park consists of twenty-five platforms, the lowest of which is 3 meters high and the highest of which is 25 meters. They are connected by rope ladders. The quest includes 20 different stages. Before the passage of the strip is briefed on the safety system, but just in case, passing obstacles accompanied by an instructor. Duration of the route – about 4 hours.

As elsewhere in Cambodia, on Koh Rong hotels are, as they say, “for every budget” and, accordingly, with different level of service offered. Most accommodation on the island – a separate bungalow right on the coast. The “minimum set” includes a room with two beds, a bathroom and a mosquito net.

The hotels that get the best reviews are Coconutbeach Bungalows, Inn the Village, TUTTY’s Guesthouse, and Sok Sun Beach Resort.

If until recently the island almost did not have any infrastructure (even the electricity is turned on at certain hours), then in a very short period of time there were a lot of things that make life easier for tourists, including a variety of cafes, bars and nightclubs, bungalows have Wi-Fi. The Cambodian government plans to build an airport here. Of course, this will increase the number of tourists visiting the island, and at the same time the prices will increase.

How to get to Koh Rong and Koh Rong Samloem?

Everyone who decided to vacation in Cambodia, should visit Koh Rong, and everyone has a question: how to get to the island? Very simple: first you need to get to Sihanoukville, and from there by boat to Koh Rong. 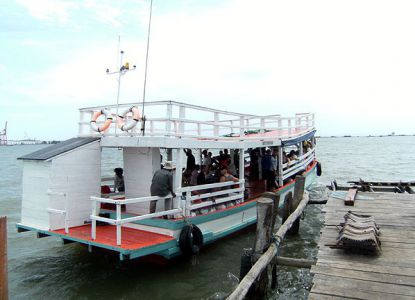 A few years ago the transportation was engaged only one company, now there are several, which has increased not only the number of boats to get here, but the quality and speed of transportation: if before the island to get about two hours, the road now takes about 40 minutes by high-speed ferry (however, you can enjoy a leisurely sea journey for two hours, going on an ordinary boat). The cost of the trip – about $ 20 (round trip).

Phantom pains after Thailand – can’t stop comparing Sihanoukville to Pattaya. Forgive me, a sinful fool, but I’ll continue now. In Siam, what’s the hottest island? Ko Lan, obviously. And in Cambodia the most popular among tourists and expats – Koh Rong… And that’s where their similarity ends.

READ
Travelling to Berlin: The main sights of the city.

Oops! And this is another island in Cambodia. But the picture is beautiful))

What is Koh Rong today

If I were a copywriter for a tour operator, I would write something like: 40 km of milky white desert beaches, virgin jungle, crystal blue Gulf of Thailand, romantic bungalows, authentic fishing villages, an atmosphere of total relaxation and meditation. It is a fashionable way to call any kind of motionless immersing yourself in meditation. People don’t understand what to meditate anyway, but copywriter will get into a trend…

Thank God, my career as a staff copywriter did not work out, because I did not reciprocate. So instead of clichéd verbal nausea, I’ll try to explain in a human way whether we need to go to Rong, or the world’s best Sihanoukville beach Otres will be enough.

We should, guys. Because “tea from the samovar is a completely different tea” (c), and the Cambodian islands are still subtly different from even the most insular and mimicry in Thailand – Lanta, there, or Ko Chang with Pangan together. It’s quiet here, guys. So quiet you can hear your own heartbeat. So frighteningly beautiful sunsets, so magically shines planktonom sea at night, that I want except that I cry from the unknown joy before – alive!

The fragment of Kampuchean land on the waves of the Gulf of Thailand is shaking like a diamond in the rough. And Pattaya Larn against it is like a vulgar wench from Walking Street against the golden-haired heavenly dancer Apsara.

I know, I know: it’s time for you, Martushka, to write books, to open your souls beautiful boils in fiction, blah-blah-blah… Let’s go to Ko Rong – I will work as a simple Russian blogger-guide for now, without any frills. And then we’ll see what to do with me, blissful, then.

About how to get there, by the way, I have already composed for you, my friend, the manual of the century: there are speedboats, ferries, boats and helicopters – with all the points, prices, links and other essential travel stuff. If there’s anything you still don’t understand, write a questioning comment – we’ll clarify it for you.

And finally, in a mundane blot on the map. Otherwise you’ll get lost. But better still prudently download Maps.me atlas of Kampuchea – the age of JPEG. And these paper maps I never understand, because I do not know where I am.

There are: seven bays and 28 beaches. And it’s better to be determined beforehand, to which of them your travel-souponka lies today. For there are no roads, and inter-beach movement only by sea will cost you a pretty penny. Remark, of course, only for those who are forced to save a penny.

READ
Lake the size of the city of Taupo, New Zealand

What to do on Rong.

There are no ATMs, no asphalt sidewalks, and no streets. But every year thousands of travelers from all over the world prefer the local white sands, peace and relaxed atmosphere of the backpacker brotherhood to the expensive hotels of Sihanoukville.

It is not available yet – no hospital, no “ambulance” etc. But recently, local expats organized their own kind of medical center, where usually stays a nurse or a maximum of a paramedic – Koh Rong Emergency Services and Medic program. The most common problems encountered are cuts requiring stitches, festering wounds, Dengue fever, and overdoses. They can also help with more severe cases here to somehow make it to Sihanoukville. Their Facebook page.

There are pharmacy outlets, but mostly with generic ibuprofen, bandages, and Southeast Asia’s much-loved paracetamol. Naturally, they are triple-priced. One is at the budget Elephant Guesthouse on Koh Touch, the other is Best Friend Pharma Cabinet, on Koh TOCH Village. To the left of the marina, open from 9 a.m. to 9 p.m.

For serious injuries and illnesses, the only option is emergency transportation to the mainland. The nearest urban village Sihanoukville – is a few hospitals, where the vast majority of doctors at the slightest threat to the patient’s life, his ability to work and ivona, dochturskoy, reputation immediately relieve themselves of responsibility and send the patient in Phnom Penh. That’s another 200 km away. Sometimes even directly to Bangkok, because Cambodian medicine in general is much worse than Thai medicine.

Who does not want to have dinner at a table like that?

And I will never get tired of repeating nerdily: take care of health insurance in advance. Especially in the Land of Khmer: here they treat badly, the money worships low – the cost will be almost always, though in the case of Dengue, or a fall from the bike. There are no magical municipal hospitals like in neighboring Siam. Well, there probably are, but they’re not magical.

The cost of an emergency evacuation to the mainland is about $20,000. Even your kidney is worth comparatively less, my soaked Angkor Beer friend…

Tips for a 100% successful vacation to Koh Rong in Cambodia

Simple and mundane. And concern mostly what you should bring with you.

We take repellent. For pacifists like me, herbal mosquito repellents will do. Or any of the stores in Sihanoukville, as there are few shops on the island, few goods, too, and everything is very expensive.

That, my little travel lover, is the end of the story. Because it is long. Because I do not want to leave out any details.

But a little later I will definitely make a couple more articles about the island:

With wishes for the smoothest and safest Cambodia, sincerely yours, Asian Marta. Preah Sihanouk, November 2016.