Kanazawa is a wonderful ancient fortress city in Japan located on the west coast of Honshu. Kanazawa means “Golden Swamp,” and it goes back to the legend of a peasant who made his living by digging potatoes. He would wash gold dust off the potatoes and store them in his well. The city is surrounded by the Japanese Alps and has two rivers flowing through it, the Saigawa, said to be the only male river, and the Asano, a gentle, feminine river.

Save on a trip to Kanazawa!

One of the main attractions in Kanazawa is the Ninja-era Shrine, or in another reading Muryuji The temple belongs to the Nichiren Buddhist school. It was built on the orders of the daimyo Maeda Toshitsune in 1643 beside his ancestral castle in Kanazawa. The temple appears to be two-story, but it is actually a four-story building with a seven-level internal structure consisting of 23 rooms and 29 flights of stairs. The temple has a drinking water well and a tunnel leading to Kanazawa Castle.

Kanazawa Castle resembles a giant bird preparing for flight. It is characterized by white tile tiles on the roof and massive beams of American cypress. The palace is surrounded by a labyrinth of intricately arranged pathways, whose task is to protect the castle from enemies. There are about 70 temples and several samurai houses on an area of less than 1 square kilometer. One of the temples, Moyoruji Temple, is characterized by hidden staircases and trap doors.

Cycle to the Omicho Market and enjoy a huge variety of vegetables, fish and crabs. Cool your hands by touching the giant blocks of ice at the market.

The crowning glory of Kanazawa’s grandeur is the Kenrokuen Gardens, which occupy an area often called Japan’s most beautiful park. They were laid out in the 17th century. In spring, listen to the grasshoppers as you wander under the blossoming branches of apricots and cherry trees, past cascading fountains, and cross bridges with stone lanterns. In winter, the garden shines with a thick layer of snow, and the branches of graceful pine trees are supported by ropes called “yukitsuri.” Scattered mounds of mounds offer panoramic views of the park’s elaborately landscaped grounds. Central Mist Lake (Kasumigayake) is the most attractive of the bodies of water, with an island “turtle shell” (the Japanese deeply revere the turtle as a symbol of longevity).

Other Kanazawa specialties include beautiful five-color glazed kutani pottery, which you’ll find in many downtown stores. Before you buy, check out the best examples at the City Art Museum, located in the park. To the west of the park stretches the old samurai quarter of Nagamachi. Stroll along secluded canals sandwiched between dark wood houses, along very narrow zig-zag streets designed to make it difficult for the enemy to advance. The magnificent Saihitsu-an house introduces the process of dyeing silk, resulting in extremely expensive kimono fabrics. On the eastern edge of town, just north of the Umeno Hashi Bridge spanning the Asano River, is the old geisha quarter, somewhat more dilapidated than Nagamati, but no less attractive for that reason.

There are several museums in Kanazawa. There are four museums in the south of Kenroku-en Park. Next to the Seison-akku residence is the Museum of Traditional Arts and Crafts. It exhibits interesting collections of lacquerware, ceramics, Yujen silk, and musical instruments.

The Art Museum in the south of the park contains collections of special Kutani ceramics, dyed silk clothing, calligraphy, lacquerware, and other traditional arts.

The Honda Family Museum displays weapons, utensils, and other art from this family.

By train or plane, the nearest airport in Komatsu is about 50 minutes away. 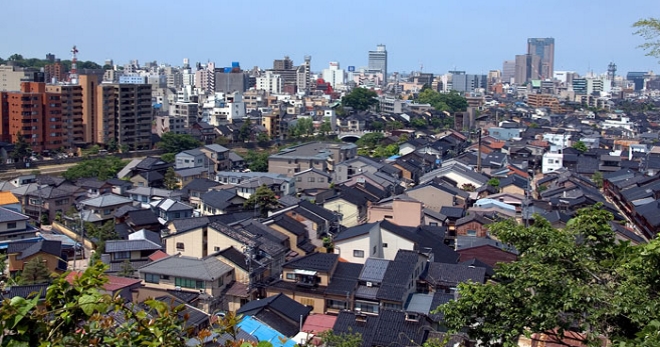 Kanazawa is the administrative center of Ishikawa Prefecture on Honshu Island in Japan. Located on the coast of the Sea of Japan, the city, whose name translates as “golden swamp,” is practically in the center of the Japanese archipelago. It is one of the historical centers of Japan. Thanks to the fact that for six centuries Kanazawa has never known war, she was able to keep the historical appearance and traditions, so that here like nowhere else can be felt the breath of centuries. A visit to Kanazawa allows you to immerse yourself in the atmosphere of “samurai Japan”, familiar from movies and books.

Kanazawa was formed on the site of a temple settlement of the Jodo-shinshu sect. In the early 16th century Kanazawa Gobo Shrine was built here, and at the end of the century, in 1583, by order of the head of the Maeda clan Kanazawa Castle was erected as the foundation of the future city, which became the capital of the autonomous county of Kaga. At that time, it was the 4th most developed town in the country. 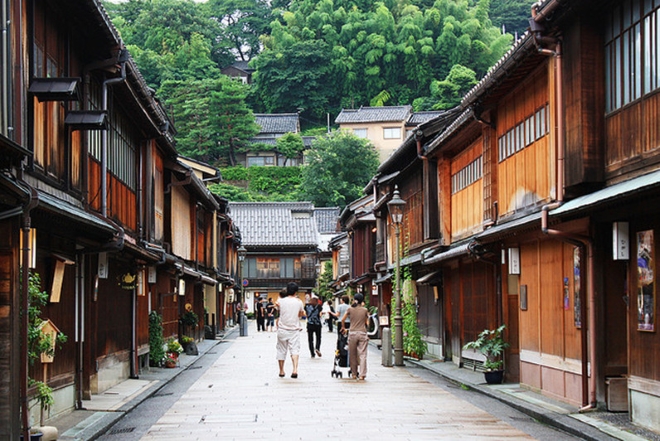 Kanazawa received city status on June 1, 1889. Today, its area is 467.8 square kilometers. Kanazawa has a population of about 460 thousand people. It is a modern megalopolis with high-rise buildings, large shopping malls, and well-developed infrastructure.

Kanazawa is one of the intellectual centers of Japan (there are 12 institutions of higher education, including fast-track universities, which attract both Japanese and foreign students). It is also a major transportation hub (the city has two seaports, Kanazawa and Nanao, and an airport) and an industrial center. Developed here are engineering, electrical goods production, fishing. 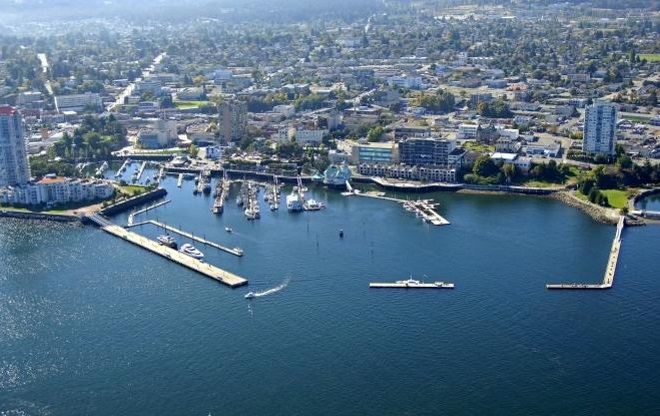 The average humidity is 73%. April is the driest month – 147 mm of precipitation, while the rainiest months are December and January (305 and 293 mm, respectively). The annual rainfall is about 2590 mm. 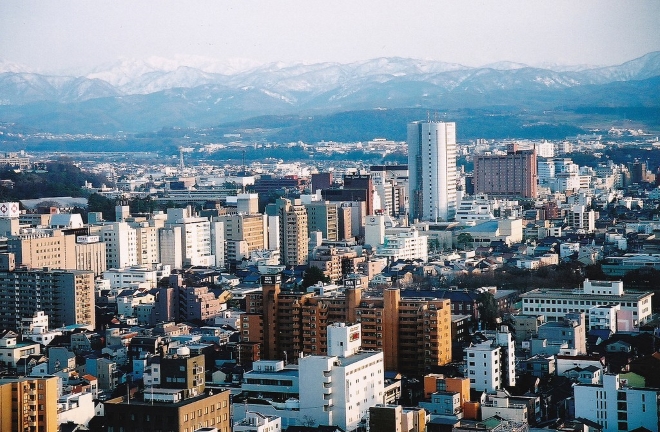 The main attraction is Myoruji or Ninja Dera, a ninja temple, a Buddhist shrine and also a secret fortress of the Maeda clan. Another world-famous attraction of Kanazawa is Kanazawa Castle, a kind of historical foundation of the city.

READ
The 3 obvious attractions in Bangkok that captivate 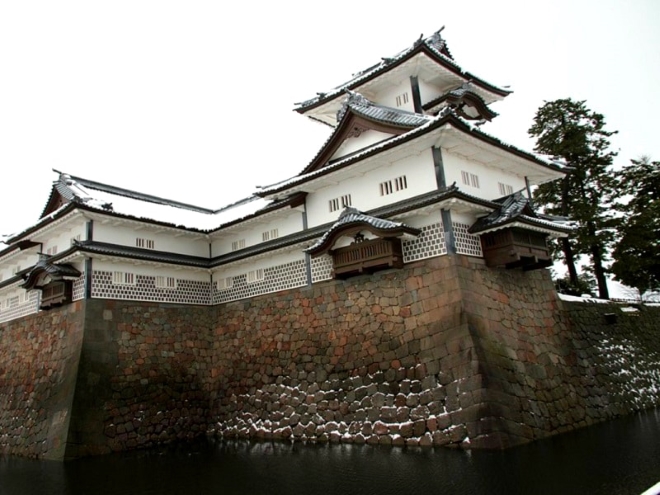 There are other attractions in Kanazawa as well:

Thanks to the fact that Kanazawa was virtually untouched by bombing during World War II, the city managed to preserve its historic face, so its streets and old houses can also be called a local landmark.

As for festivities, in June Kanazawa hosts a festival in honor of the founder of the castle (and therefore the city) Maeda Toshiie. The carnival starts from the train station and moves to the park near the castle. 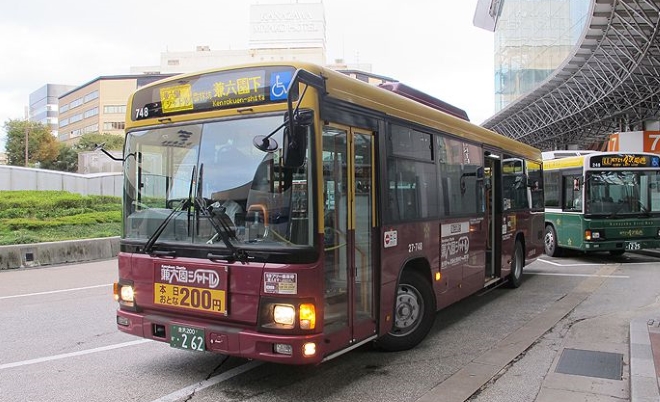 Where to stay in Kanazawa?

The city offers many options for accommodation. 5 * hotel here is only one – Kinjohro, and visitors speak highly of it. From cheaper accommodation options the best are 3* hotels:

Kanazawa is famous for its seafood such as crabs and sweet shrimp. The best places to try them, like sushi, are the numerous sushi bars and cafes near the daily Omito Ichiba market. In general, there are countless restaurants, cafes, and bars in the city. The best of the inexpensive establishments, according to tourists, are:

As for haute cuisine restaurants, the most popular are:

The city is famous for its traditional crafts. Popular souvenirs from Kanazawa include the world-famous Kaga-Yuzen kimono, Kutani colored porcelain dishes, woodware, gold leaf products, and lacquered goods. All this can be purchased in numerous souvenir stores. 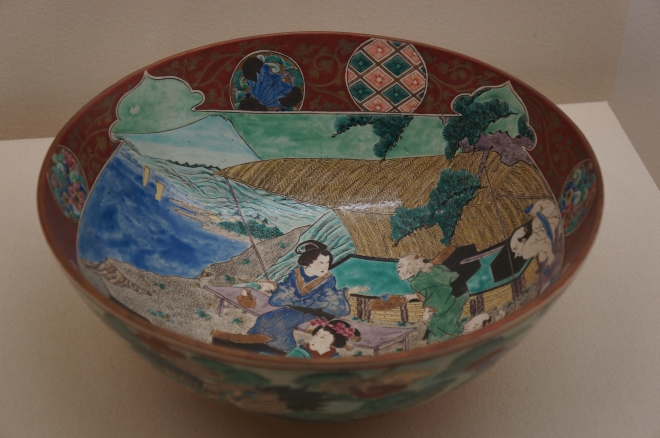 There are large shopping centers and boutiques, most of the stores are located in the city center. You should also visit the colorful market Omito Ichiba, where you can buy everything, and where a particularly striking selection of seafood. 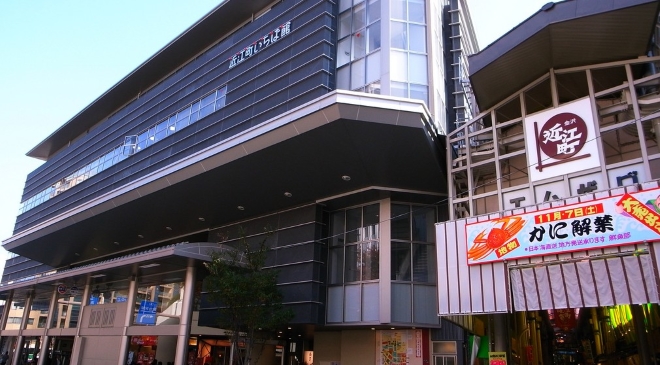 One of the most popular means of transportation in Kanazawa is a bicycle. You can rent one from one of the 18 offices of Machi-nori, a bicycle rental company. Cabs are also popular, with parking lots easily found in the city center as well as near the train station. A trip from one neighborhood to another will cost about 1,000 yen (about $8.7).

READ
Jerusalem sights: what to see, where and when to see it

In addition, the public transportation system also includes buses: regular shuttle buses (they run on several routes, but all depart from the train station), and sightseeing buses (5 routes). For example, Kanazawa Loop buses connect the train station to most of the city’s attractions.

How do I get to Kanazawa? 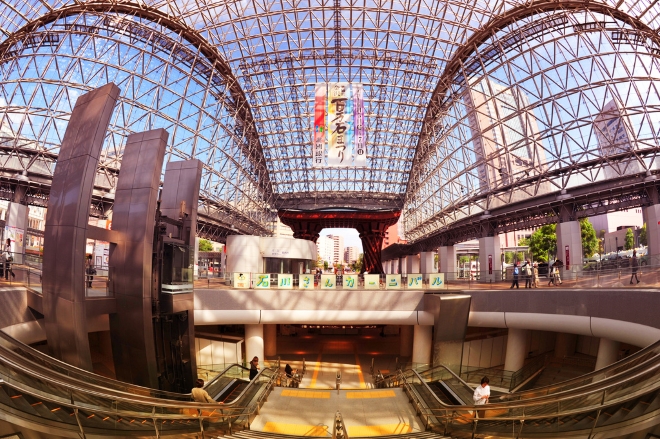 The fastest way to get here is by air. The flight takes one hour and the ticket costs about 25,000 yen (about $216.60), but you can also buy it at a discount. Kanazawa is served by the airport, which is located in Komatsu, a 40-minute bus ride from the city center. A bus ride from the airport to Kanazawa costs 1,130 yen (less than $10).