Journey to the ghost town of Chernobyl 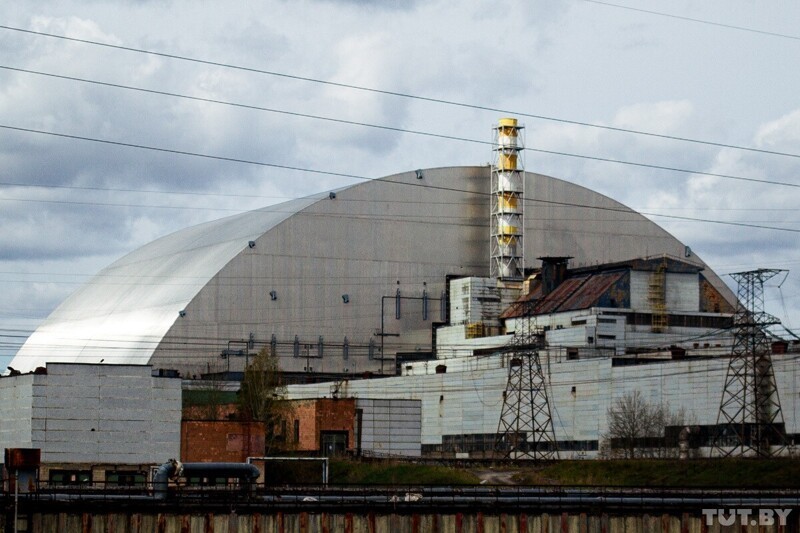 To get to the places of the Chernobyl tragedy today is not difficult. Alienation zone is available to tourists absolutely legally. The cost of a one-day tour to such places as Chernobyl city, “Red Forest”, the radar station “Arc-1”, the Chernobyl nuclear power plant and the town of Pripyat, is about $100. There are also longer tours of two, four and five days.

The first tourists were able to officially visit the exclusion zone back in 2004, and the permanent tourist routes have earned in 2012. The wave of interest in the events of 35 years ago reappeared after the release of the HBO series “Chernobyl”, which made a kind of advertising for the exclusion zone. In 2019 alone, 130 thousand tourists passed through the tourist route. Of these, 100,000 were foreigners. 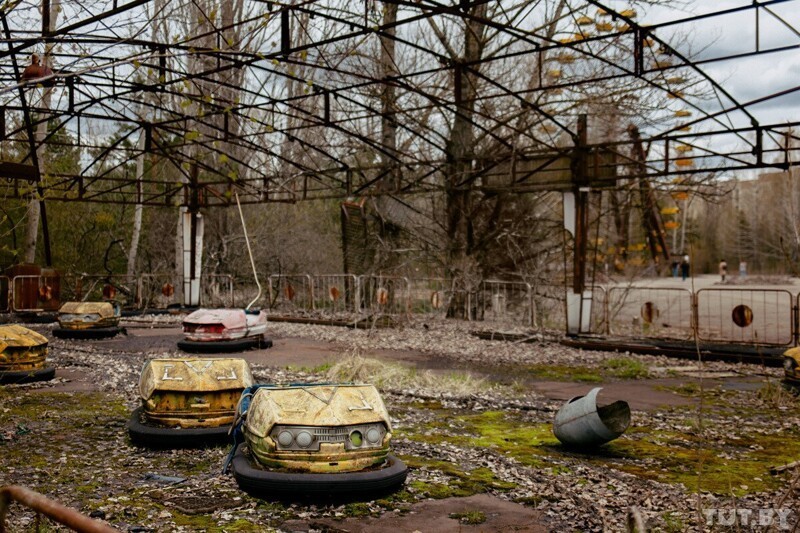 Now the Chernobyl nuclear power plant is stopped. Work is underway to decommission the plant. A new sarcophagus has been built over the fourth unit of the nuclear power plant for 10 years. Still under construction at the station is a new repository for nuclear waste of all Ukrainian nuclear power plants. Two thousand people work at the plant, and three thousand employees of the zone and the nuclear power plant live in Chernobyl, they work on a rotational basis. In Chernobyl and the surrounding area live 130 self-settlers. There are stores, a House of Culture, a cinema, hotels and a church. The current territory of the exclusion zone is about 2,600 hectares. Part of it will never be inhabited by people, because the half-life of one of the isotopes of plutonium, which is the most radiotoxic element, is 24 thousand years. 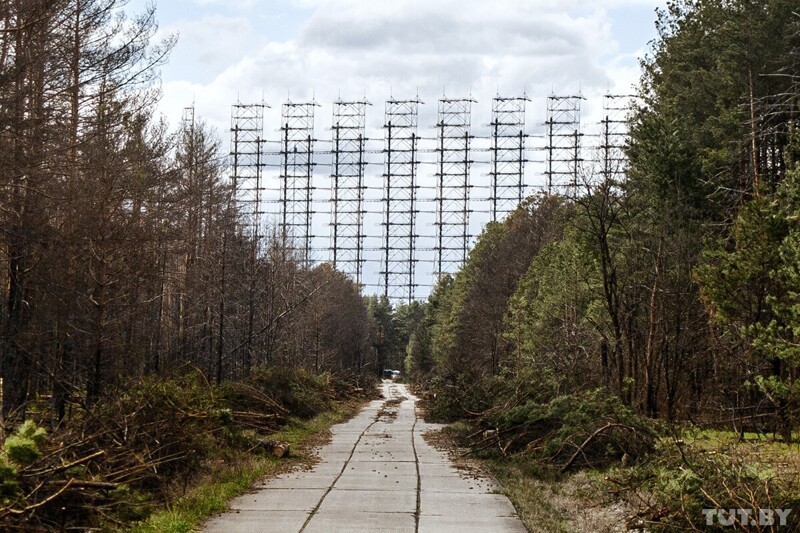 Tourists can stay in the area for up to 5 days without health consequences. Stalkers sneak in here all the time, despite the possibility of a free visit. Illegal tourists risk both their own and others’ health. After all, on the territory of the Chernobyl zone there are many radioactive “spots”, and walking around the zone, you can not only grab a dose of radiation, but also carry radioactive dust on your clothes. On the eve of the 35th anniversary of the explosion at the Chernobyl nuclear power plant in the area most of the roads used for economic activities were re-laid with asphalt.

READ
11 most beautiful tea plantations in the world

Stands are being installed at the entrance to tourist sites, as well as reconstructed Soviet buses 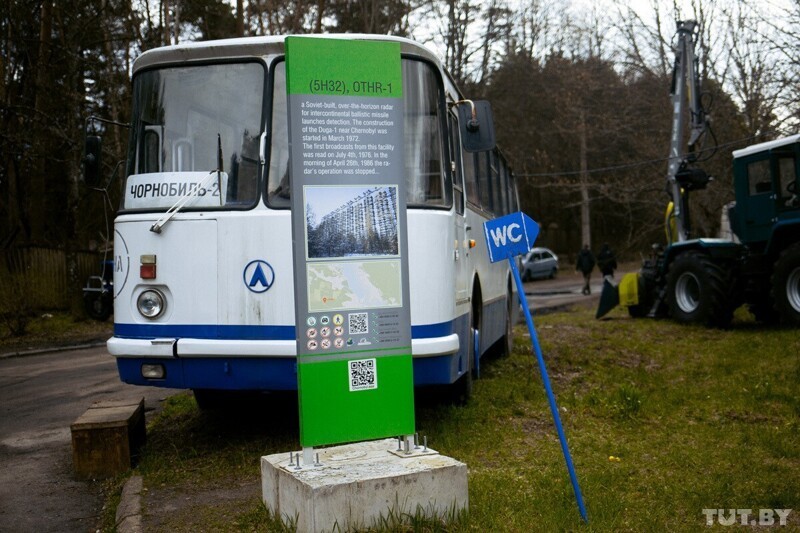 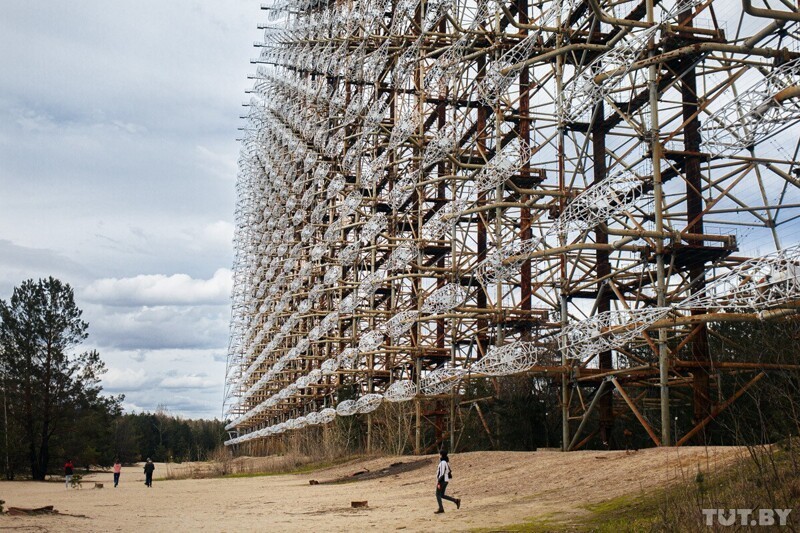 The length of the radar antenna is 750 meters. Tourists were allowed to visit it in 2016. “Duga-1” had a secret name “Chernobyl-2”. And in the public documents of Soviet times, it was listed as an abandoned pioneer camp.

Once there were 46 thousand people living in Pripyat. They were all evacuated within days after the explosion at the plant. 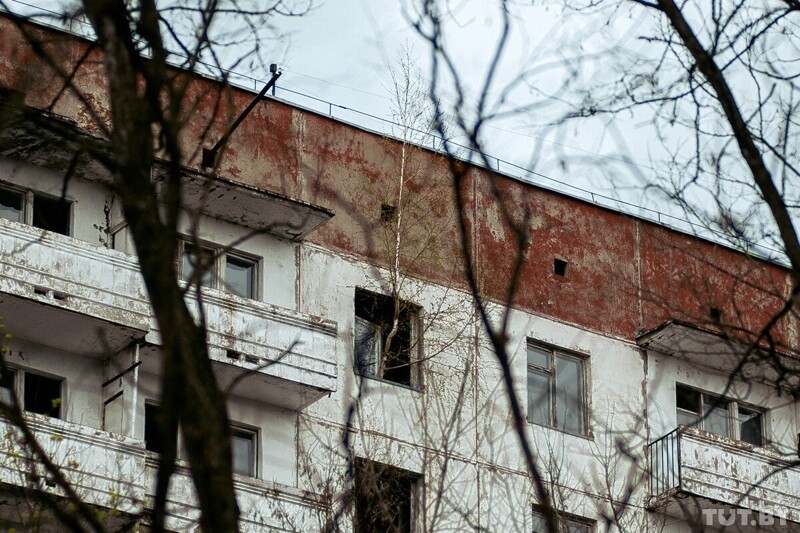 Construction of a new sarcophagus above the fourth unit of the Chernobyl nuclear power plant began in 2007. In 2019, it came into operation. Its giant hull can be seen even from the territory of the Belarusian Exclusion Zone 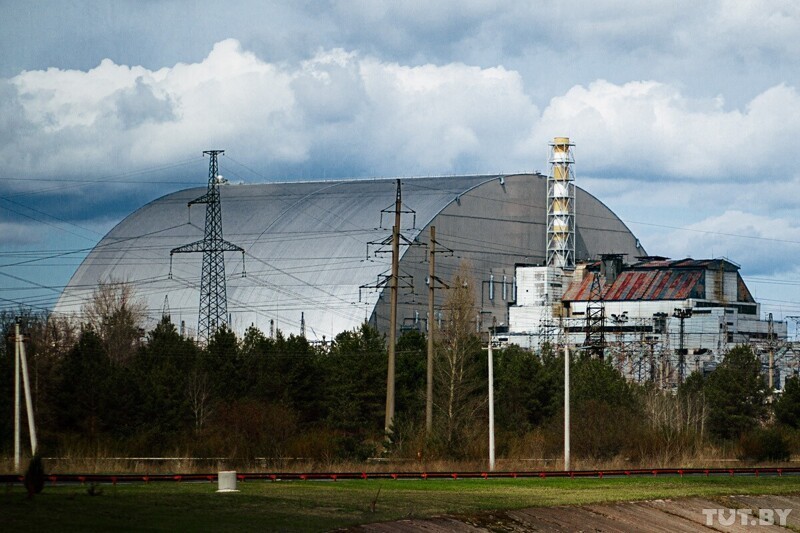 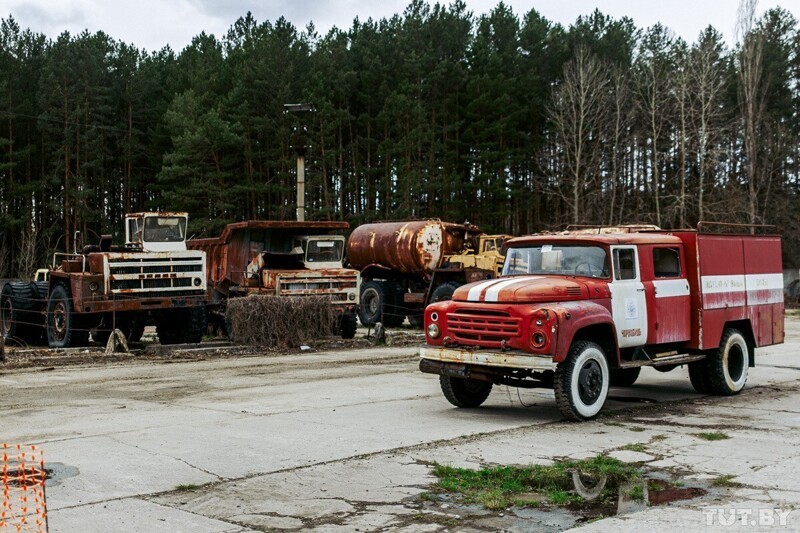 A school swimming pool in Pripyat 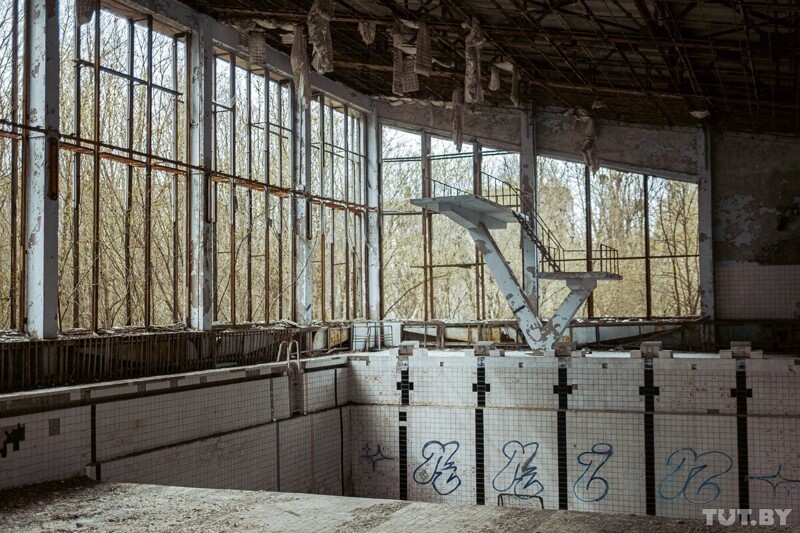 The famous Ferris wheel in Pripyat never worked. Its launch was scheduled for May 1, 1986 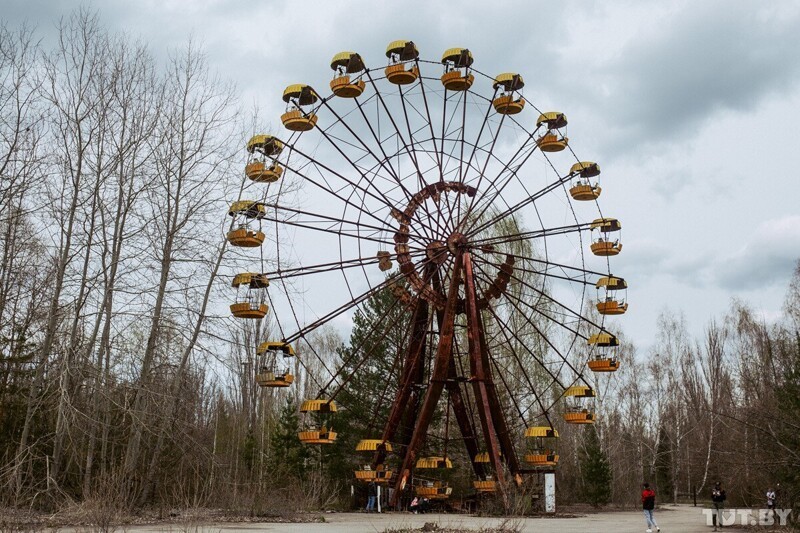 The Red Forest special site is an area of high radionuclide contamination. Visiting this area is still forbidden 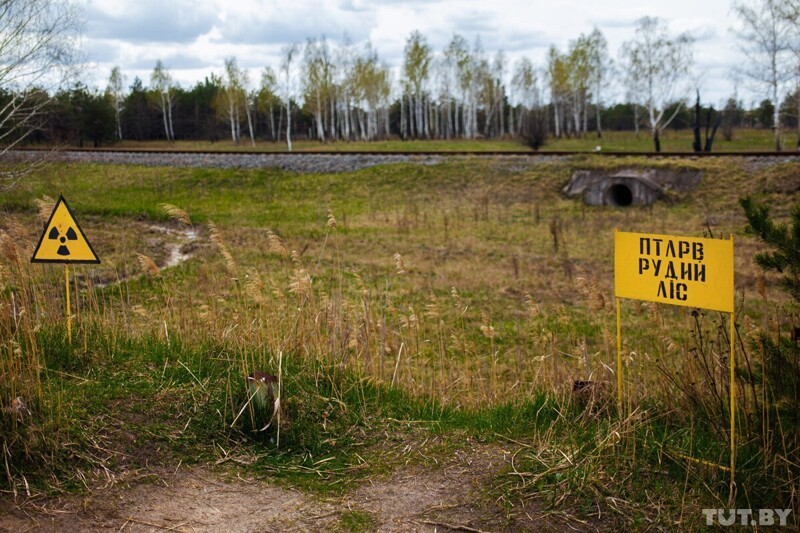 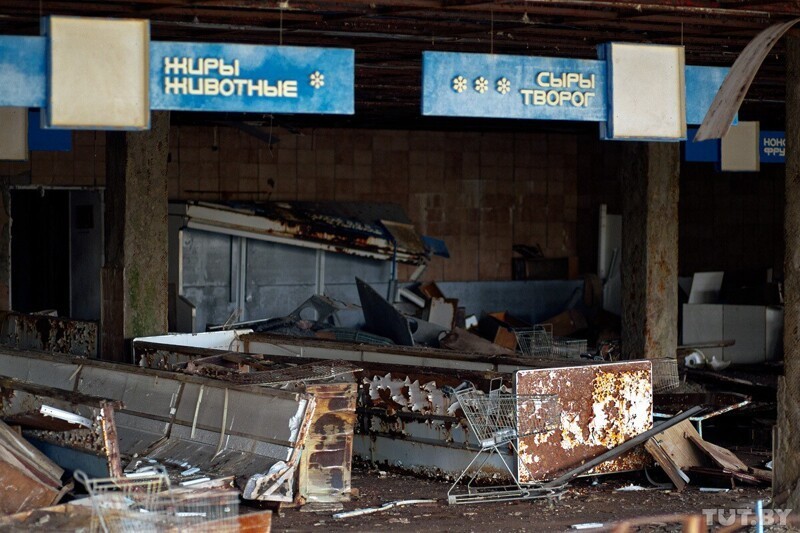 Checkpoint at the entrance to Pripyat 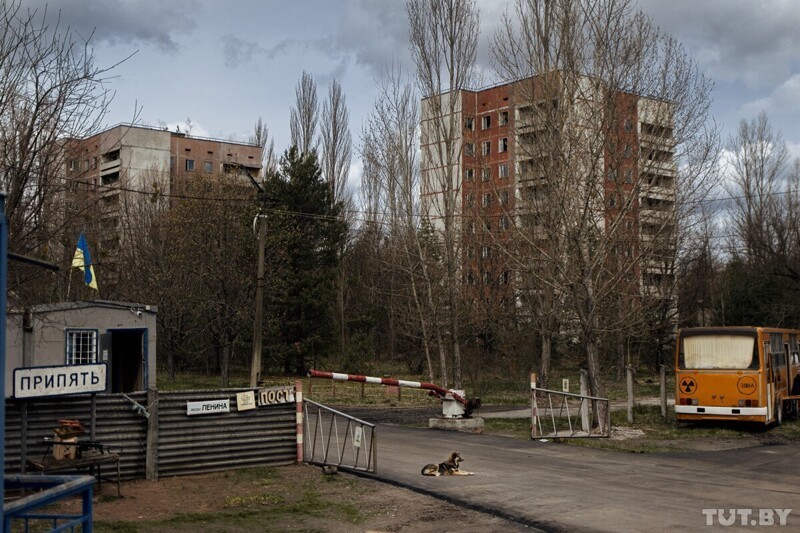 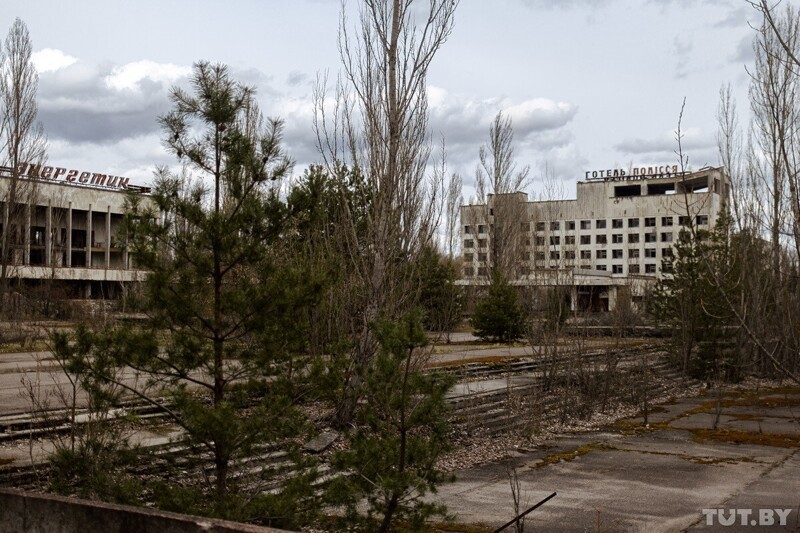 The movement of tourists in Pripyat is restricted. It is best not to walk on the grass and bushes – the dust is radioactive and settles on your clothes. To move around the city is only possible in a group and with a guide, and to enter the buildings is officially forbidden.

Despite the fact that Ukraine has a law on decommunization, the Exclusion Zone has preserved its Soviet symbols and names. Here you can find monuments to Lenin and pictures of the Soviet emblem. 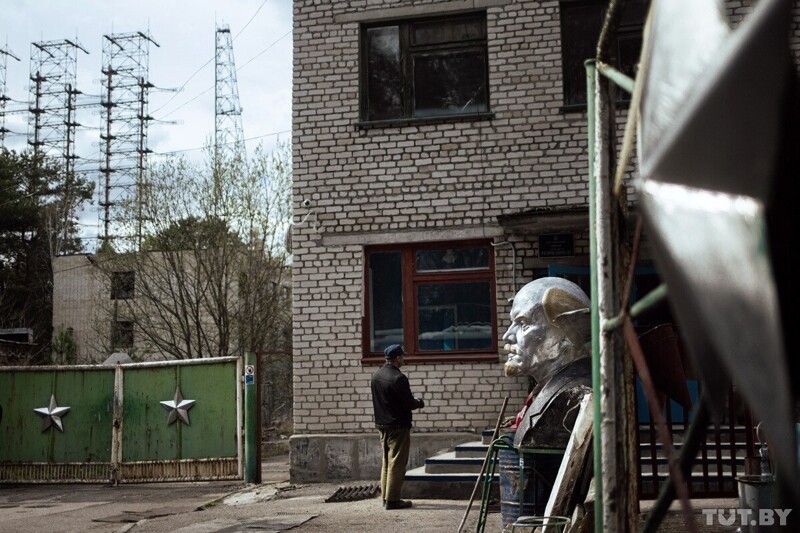 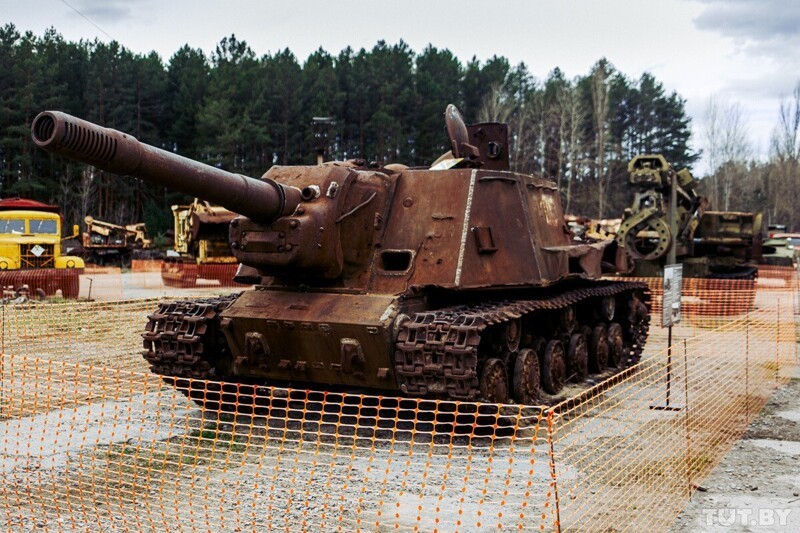 The Exclusion Zone territory suffering from fires in the summer 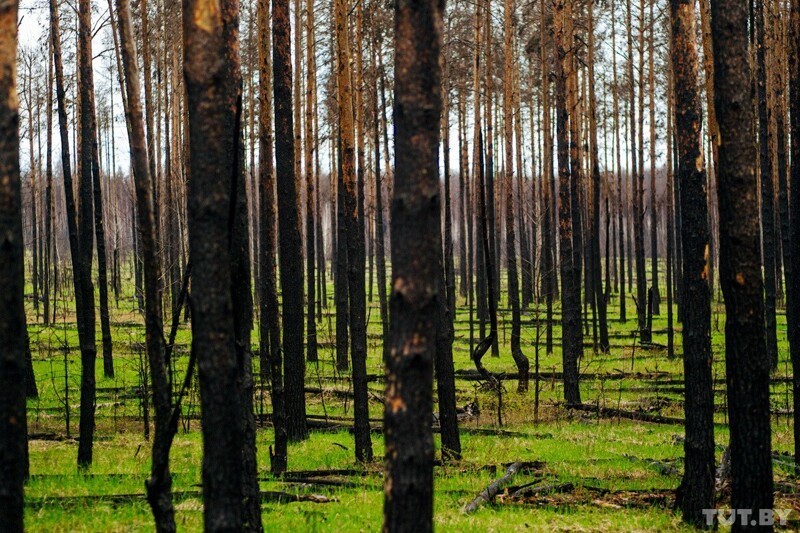 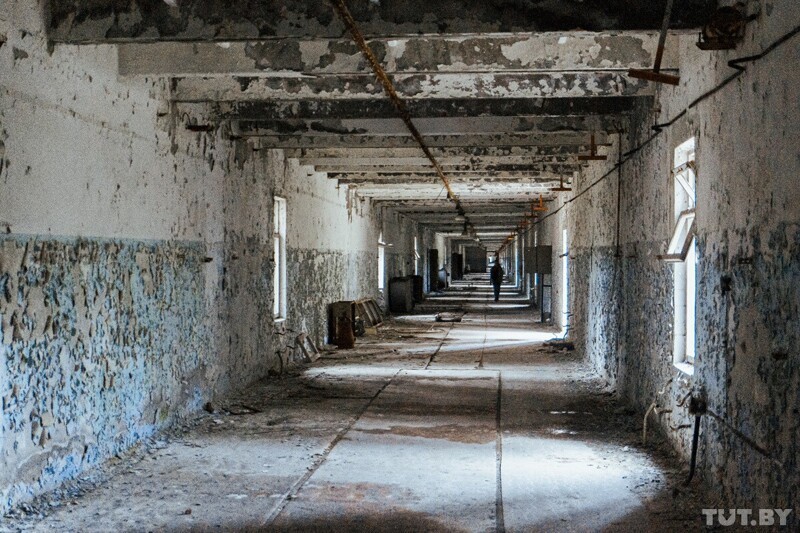 A training class at the Duga-1 radar station 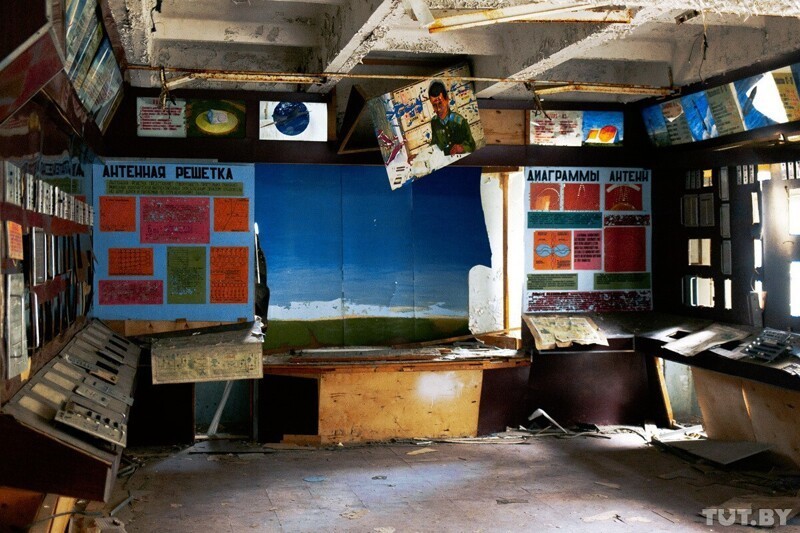 Chernobyl looks like a normal town. Around 3,000 people permanently stay here, and there are stores, a cinema, a House of Culture and a church. 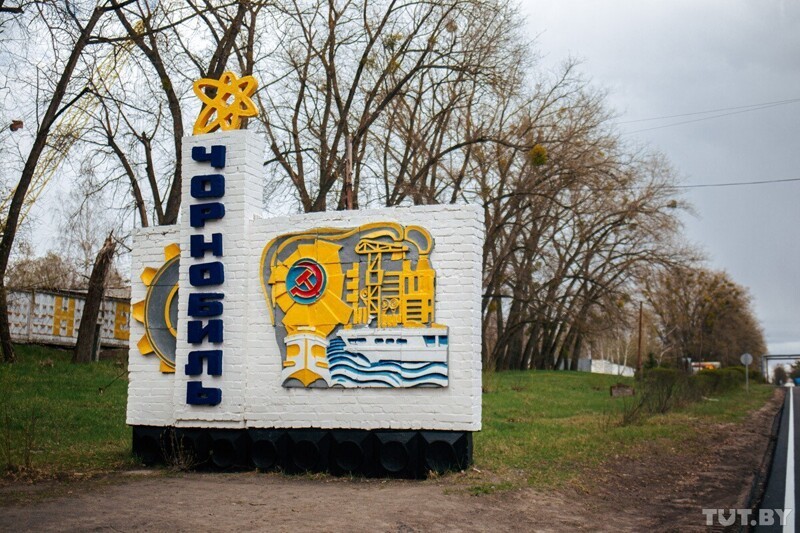 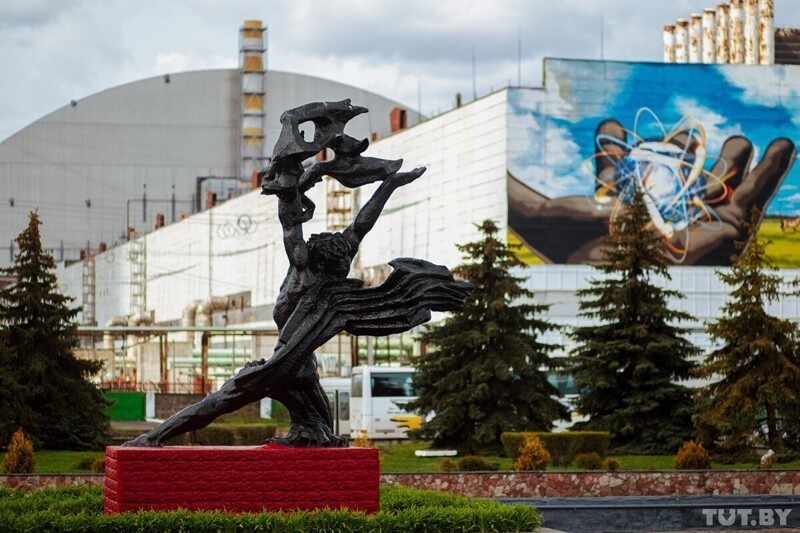 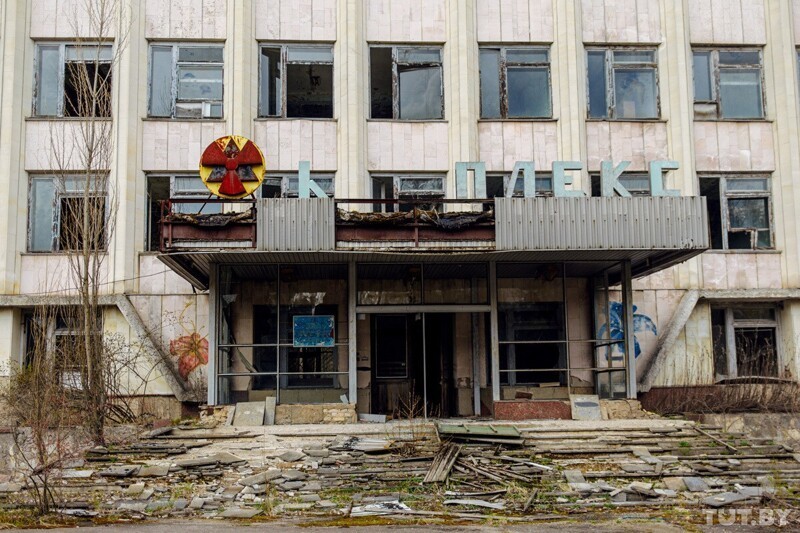 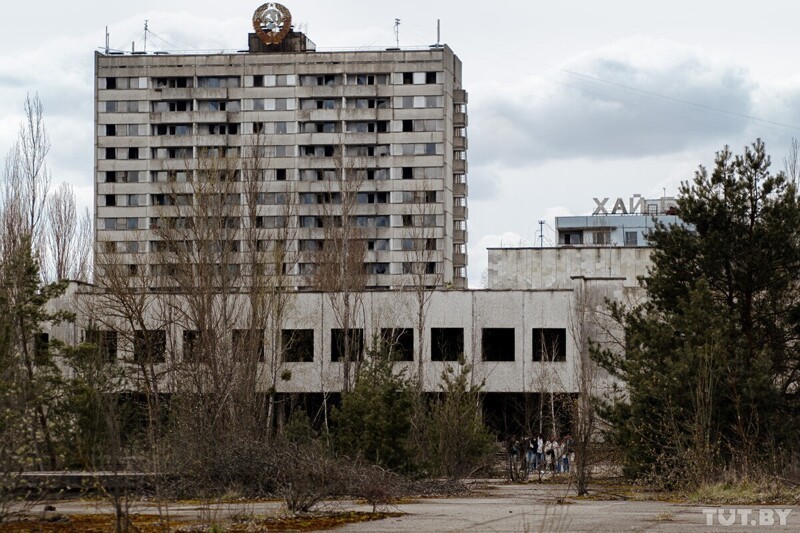 Checkpoint “Dytyatki” is the largest at the entrance to the Chernobyl zone. 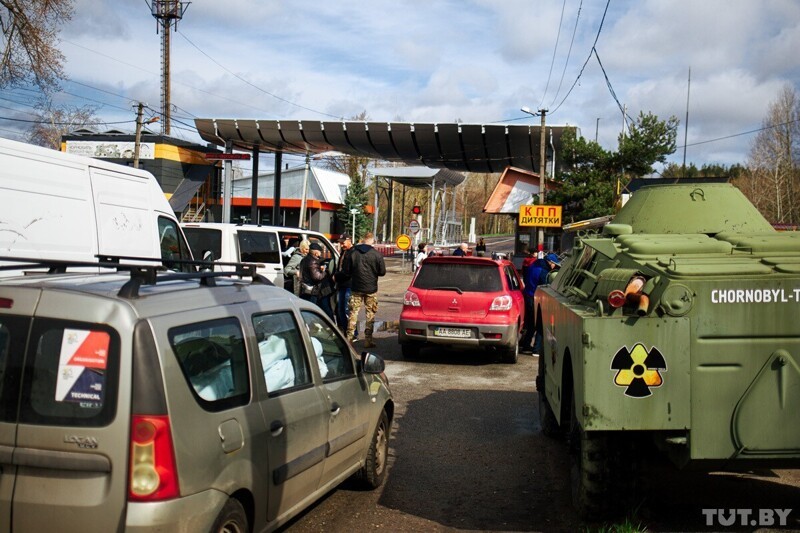 It is always crowded and there is always a line of cars. In 2019, during the high tourist season, buses with tourists waited their turn for an hour.

READ
Holidays in Bosnia and Herzegovina

Pripyat: a ghost town in Chernobyl

Barely taking a step through the alienated land, a tourist is sure to feel the inexplicable sense of dread that invisible radiation once gave to people from 1986. Traveling through the town of Pripyat you will see not only abandoned houses, infrastructure, whole pictures depicted on the houses. Something more terrifying awaits you up ahead.

The forest bursting into the city

Why is Pripyat called a ghost town?

Pripyat is a ghost town, that’s for sure. But it’s not abandonment or even rusted-out attractions that make it such. A carelessly abandoned boot on the floor, a frayed and yellowed pillow, a school notebook, and a tea cup on the table are eerie reminders of the life that once upon a time this place was teeming with life. Seeing such a thing, a person will definitely think that ghosts in Pripyat definitely exist.

Attractions in the amusement park in Pripyat

As for the ghosts in Pripyat, it is often the station workers, samosels and ordinary tourists said that they heard voices coming from far away, saw unexplainable to the human eye shadows. Of course, such a phenomenon can be explained scientifically. The imagination, under the influence of terrible stories passed through the consciousness, could visualize unreal pictures. But the fact that Pripyat has long been immersed in the sadness of tragic events is obvious.

Premise of the Jupiter plant in Pripyat

Do you know how many people were hospitalized immediately after the accident? 300 people were sent to the medical emergency unit of the city. Of these, 237 patients were diagnosed with radiation sickness. Among total number of hospitalized 129 people were taken by special flights to Moscow, because they were rather seriously ill.

Similar disasters in the world

From the reliable facts presented by Academician V. Legasov since 1971, it follows that a total of about 150 accidents occurred at nuclear power plants in 14 countries around the world. The accident at the American nuclear power plant in 1979 was considered to be the largest. The cause of this accident was a failed cooling system, as well as the accumulation of hydrogen, which in all likelihood could have exploded.

READ
13 incredible things to do in Long Beach, USA

The accident at the nuclear power plant in the United States occurred on March 29. At that time 1.4 million liters of water contaminated by radiation were released into the Susquehanna River. It turned out that the management of the plant consciously committed a crime and emitted harmful elements.

The most frightening thing was that not a single report of radioactive contamination of water was received either by the local residents or by the authorities. Information about this was only announced in Congress 10 days later.

The ghost towns of Chernobyl and Pripyat still stand on Ukrainian soil. A release of radioactive nuclides shielded these areas from normal life.

However, what was released into the environment after the explosion was far more dangerous than what was contained in the reactor itself. After all, it was no longer just fuel, but its fission products: noble gases, cesium, iodine. The total release of these products into the atmosphere was about 50 MKi. This is about 3.5% of the total amount of radionuclides.

Modern technical capabilities allow a person to travel to the exclusion zone, even without leaving his home. To do this, just use any service of virtual tours of the Chernobyl zone latitudes. You can also watch interesting videos on YouTube about the ghost town of Pripyat.

A lot of documentary material was filmed in these mysterious silent places. But today you can come to the Chernobyl zone in person. Just book a tour – a trip to the exclusion zone will give you unforgettable emotions.