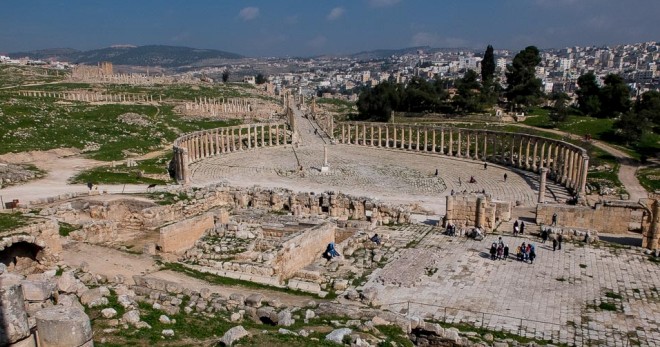 Jerash (Jarash) is a small modern provincial town in Jordan with a population of no more than 30 thousand people. It is located 50 km from Amman. The place became famous in 1806 when the German traveler Ulrich Jasper Setzen stumbled upon a part of the ruins of Roman columns protruding from the sand nearby. The ancient city was buried under tons of sand for 1000 years. Now Jerash is considered one of the best preserved and largest sites of Roman architecture in the world (except Italy, of course). The old town, where excavations are still going on, is separated from the modern one by a reliable fence.

Geography and Climate in Jerash

The city is situated on a plain surrounded by green hills and fertile land at an altitude of 500 meters above sea level. A temperate Mediterranean climate provides this region with rainwater all year round. Not surprisingly, this place has been inhabited since prehistoric times. In the remaining city walls archaeologists have found the ruins of settlements dating back to the Neolithic period (6500 years ago).

The History of Jerash in Jordan

In Jerash’s past, the culture of the Greco-Roman Empire mingled with the era and ancient traditions of the Arab East. The earliest Arab/Semitic inhabitants named their village Garshu. Later, the Romans transformed the Arabic name into Gerasu, and the Bible mentions the area as “the country of Gadara. At the end of the 19th century, the Circassians who fled here from the Caucasus transformed the Roman town of Gerasa into the Arab town of Jerash from a small rural settlement.

In 63 BC. Jerash was conquered by General Pompey and came under Roman rule. It subsequently became one of the ten great Roman cities of the Decapolis League. During the next 1.5 centuries the trade with the Nabataeans flourished here. During this period the city was built up in a typically Roman style, with a central colonnade and other trappings. After the Romans built a road from Syria to Aqaba in the early 2nd century, Jerash grew rapidly. Granite was brought in from Egypt, and the hills were razed and built up according to the latest architectural fashion of the time.

The prosperity of the town reached its peak at the beginning of the third century, when it was designated a Roman colony. By the end of the century, however, shipping began to supersede overland caravans. From this period began the decline of Jerash. In 614 the city was conquered by Persia, in 636 by the Muslims. After an earthquake in 747 its population was reduced to 4000 people. Gradually Jerash turned back into a small rural village.

The sights of Jerash in Jordan

As a result of excavations that have been going on since 1925, the ancient city is gradually being revealed. Already it exemplifies grandiose ancient Roman urban planning with paved colonnaded streets soaring over hilltops, amazing theaters, spacious squares, temples, fountains and city walls pierced with towers and gates. Here you will see:

The ancient city covers a huge area, and walking through it can seem difficult at first glance, especially since there are virtually no signposts. A map of Jerash, which you can get for free at the Visitor Center at the South Gate, will help you with this task. There you’ll also find a gift store, a post office, and a small coffee shop. By strolling leisurely through the streets of ancient Jerash in Jordan, taking pictures and allowing yourself an occasional break by sitting on one of the fallen columns, you can walk around the whole city in 3-4 hours and enjoy truly spectacular views.

In addition to sightseeing, the ancient city offers its guests:

The choice of hotels in Jerash is small. There are only a couple of options:

If you get hungry during the walk, you can eat at the restaurants:

How to get to Jerash?

Getting from Amman is very easy and inexpensive: take shuttle number 6 from the city center to the Tarbabour stop (bus station), and buses often leave from there to Jerash. The trip will take you about 1.5 hours.