Where to go from Siena in one day. From Pienza to San Gimignano, from Montalcino to Chianti. Excursions from Siena that are easy to arrange on your own.

Siena is located in the middle of Italian Tuscany. This city, built on three gentle hills, is surrounded by magnificent pastoral landscapes. In its vicinity there are many interesting corners and historical sites. There are trains departing from the railroad station and commuter buses from the bus station. Not all towns and villages are easy to get to without transfers. But you can easily take a cab for a short trip or take a guided tour. Although the ideal travel option is, of course, by rental car.

We’ve compiled a list of places to go from Siena. For one or more days, it’s up to you. But scenic views, wine and tastings await you everywhere.

The most interesting tours are the itineraries from locals on Tripster . You can start with a sightseeing tour of Siena (to see the important places of the Old City, to outline the routes of future walks). After that, go on a gastronomic tour of Tuscany – a full day tour of olive groves, vineyards, cheese tasting, and the famous Brunello di Montalcino.

Where to go from Siena for a day

Monteriggioni is a cozy fortress town surrounded by an authentic 13th century fortified wall. And the #1 place on the list to go from Siena. Of the fourteen watchtowers, eleven have survived to this day; the length of the city walls is 750 m. The streets are few: the whole Monteriggioni can be walked around in half an hour. The center of the town is Piazza Roma, where the church of Santa Maria Assunta stands. Tourists can walk through the city’s fortifications, see the collection of the Museum of Arms, and visit one of the restaurants in the main square. It is said that there is an ancient underground passage to Siena from the city fortress. However, there is no confirmation of this.

The easiest way to get to Monteriggioni is to take bus number 131. It takes 22 minutes from Via Tozzi and leaves at Colonna Di Monteriggioni. The fare is 1-3 €.

The Abbey of San Galgano 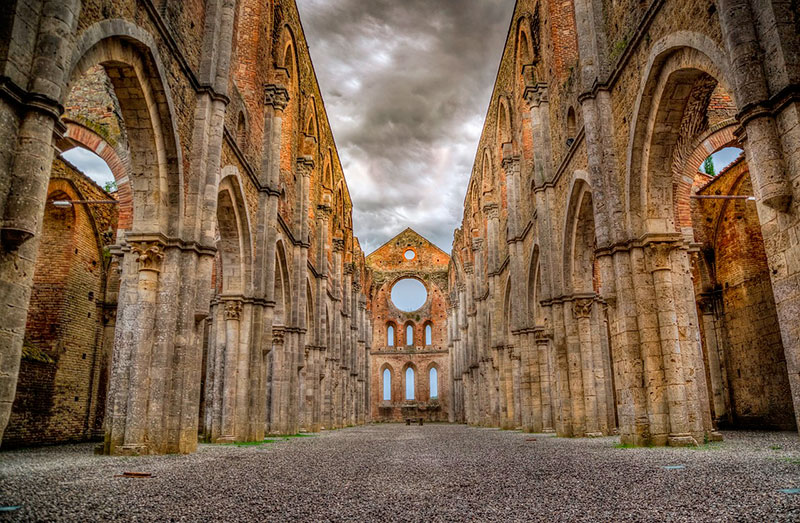 Where to go from Siena? To the Abbey of San Galgano!

The Abbey of San Galgano has existed since 1185. The once thriving abbey has stood in ruins for more than two centuries. The roof, made of lead, was sold by the Cistercian brothers in 1503 when the abbey needed money. Of the monastery, built in the rare French Gothic style, only the walls remain. The bell tower is ruined – it was broken by lightning in the XVIII century. On the hill remained a church-rotunda with ancient frescoes. Inside the temple is a relic – the sword of the knight Galgano. It is hammered into the stone that served the hermit as a symbol of the Holy Crucifixion. Fragments of the medieval buildings were restored in the XIX century. Today there are guided tours through the ruins of the abbey. The surviving walls of the abbey and the surrounding scenery have repeatedly been the setting for concerts and movie sets.

Public transportation to the abbey is not available. You can take bus number 116 from Siena’s Colonna San Marco to the S.S.73 Case Piane bus station (1 hour and 43 minutes, ticket costs 2-4 €). To the abbey you have to walk another 4.6 km.

Car trip to San Galgano with transfer from the hotel in Siena costs from 190 € for 1-3 tourists. Additionally you will need to pay 3,5 € for entrance tickets.

San Gimignano is a fantastic “city of towers”. It is quite small but always full of tourists. The historic center of the town is a UNESCO World Heritage Site. On the territory of San Gimignano there are 14 rectangular stone “skyscrapers” built by two aristocratic families. These structures have survived since the Middle Ages (there used to be over 70 towers). Some of the surviving structures reach a height of 50 meters. In the Museum of History “San Gimignano 1300” you can see a ceramic reconstruction of the appearance of the city in the fourteenth century, with all the towers. The museum exhibits tell the story of the medieval pilgrimage routes through San Gimignano and testify to the confrontation between the local Ghibellines and the Guelphs.

There is a direct bus service between Siena and San Gimignano, bus number 130. From Siena-Via Tozzi station it takes 65 minutes to Porta San Giovanni . Tickets cost from 3 to 5 €. 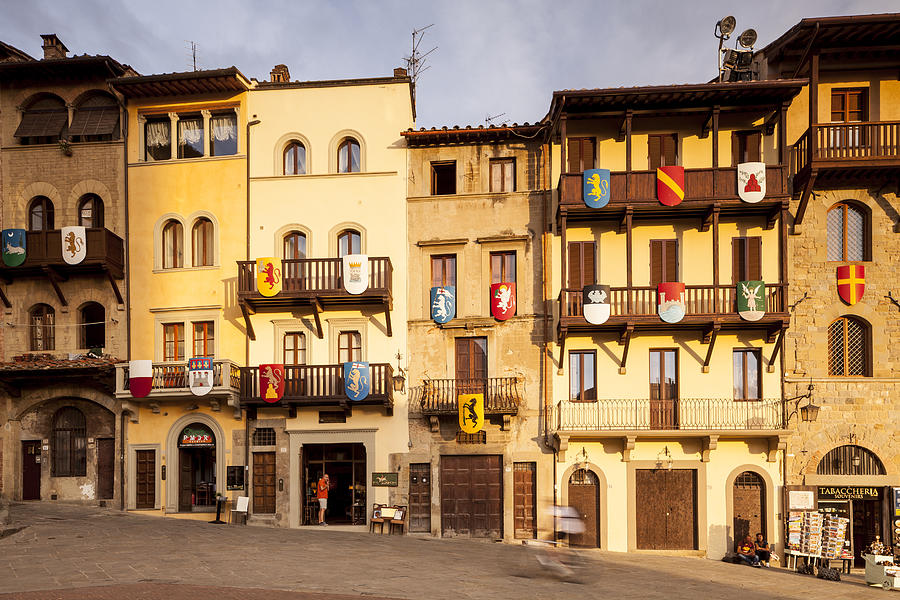 Arezzo is one of the oldest cities in Tuscany and has preserved its ancient and medieval architectural monuments. The city’s main square, Piazza Grande, is interesting because it is located at an angle. Along the perimeter of Piazza Grande are Renaissance mansions, the temple of Santa Maria di Pieve with a Romanesque apse, the Gothic palazzo Fraternita dei Laici . The architects who created the ensemble of this square had to design the buildings with a considerable slope. The cathedral of Arezzo dates back to the XIV century, the church of San Francesco – from the XIII century. The most famous church in the city is San Domenico, designed by Pisano.

Roberto Benigni, director of the Oscar-winning film Life is Beautiful, was born in Arezzo. He shot his cult film in his hometown.

Arezzo is 75 km east of Siena. Between the cities runs a direct bus Tiemme Spa, route 138. It leaves from Porta pispini every hour, takes 80 minutes to Via Veneto – Distributore Agip. Tickets cost 5-8€. 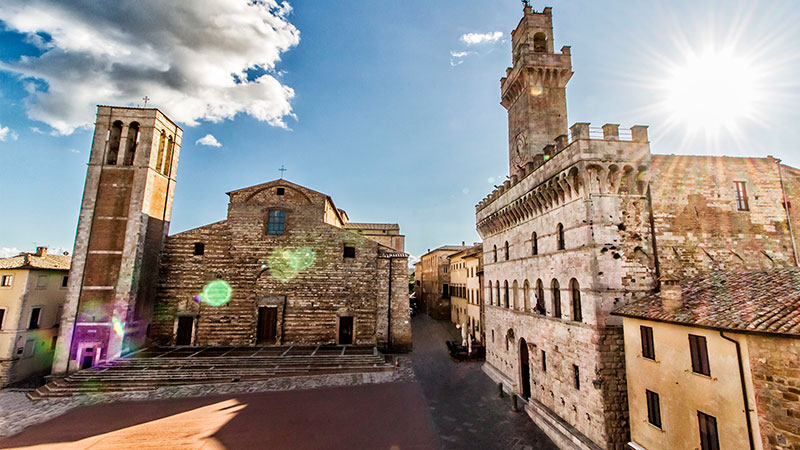 Where to go from Siena? Montepulciano!

Montepulciano is an ancient city founded by the Etruscans on a hill on the southern border of Tuscany. It is famous for its Mannerist palaces and mansions from the Cinquecento period, and for its medicinal thermal springs. The cathedral of Montepulciano, ascetic on the outside, conceals a beautiful interior. The church on the outskirts, the Chiesa di San Biagio, is considered a standard example of High Renaissance architecture. Near Montepulciano is the thermal spa of Terme di Montepulciano, which was the setting for T. Tykwer’s movie “Paradise”. The city is famous for the noble wines of Nobile di Montepulciano.

From Siena you can go to Montepulciano by bus number 12 from Porta pispini, with a change in Buonconvento. The fare is 5-9 €; the journey takes about 2.5 hours.

See a selection of photos of Montepulciano from the album Italy. To judge with your own eyes whether this place is worth going there from Siena or not.

Pienza is a small town with a distinctive architectural appearance. It has been called the “ideal Renaissance town”. Pope Pius II ordered the rebuilding of his native village of Corsignano in the Renaissance style, and Bernardo Rossellino was entrusted with the work. In three years (1459-62) the architect created a Renaissance miracle, a new harmonious city, later declared a UNESCO site. The Duomo of Pienza is among the most important monuments of the Renaissance. Adjacent to the main cathedral square are three ancient palaces, the Communal Palace, the Borgia Palace and the Palazzo Piccolomini, where the Diocesan Museum was opened. Pienza is famous not only for its perfect Renaissance architecture, but also for its delicious cheese – the authentic Pecorino di Pienza .

Of course, Pienza is one of the most interesting places to go to from Siena. But you can get there only through Buonconvento. 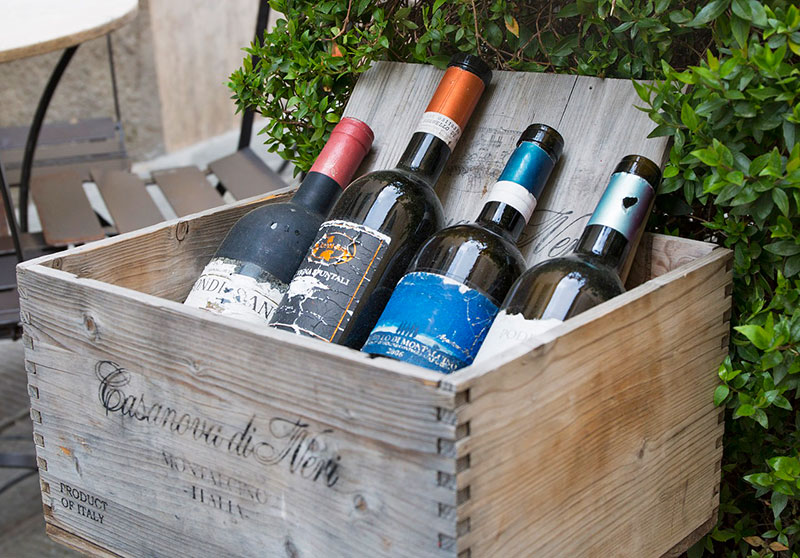 Where to go from Siena: Montalcino

Montalcino is a citadel of unspoiled medieval architecture. And the place where the most expensive wine of Italy is made. A small compact municipality is situated on a hill around the fourteenth century fortress of the Fortress of Montalcino. The town is surrounded by the silvery groves of olive trees, vineyards, misty hilltops. In Montalcino, the Romanesque church of Sant’Egidio with authentic late medieval decorations has been preserved. The cathedral, too, has existed since the fourteenth century and has undergone a neoclassical reconstruction. The Church of the Madonna del Soccorso, heavenly patroness of Montalcino, was built in the twelfth century.

One of the main values of the town is Brunello di Montalcino, a noble DOCG wine.

Prices for organized wine tour from Siena with a tour of the fortress of Montalcino are from 70 euros per tourist.

There is no direct transport to Montalcino, but you can get there through Buonconvento. First, by train REG from Siena-Grosseto station, then by bus route number 114. The train ticket costs 2-6 €; the bus ticket from Buonconvento starts at 2 €. The journey takes about 1,5 hours. 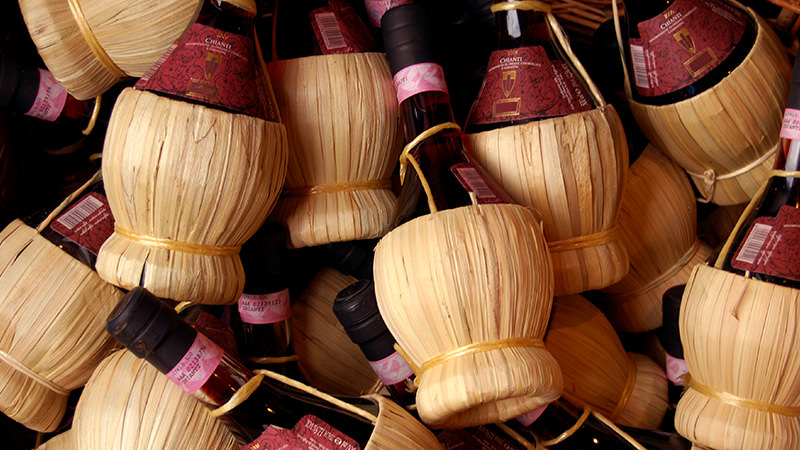 Wine is the treasure of Chianti.

Greve in Chianti is another “wine” municipality of Tuscany. It is located in the Chianti Valley, among vineyards and wine farms. It is a cozy town with a well-preserved historical core, with Renaissance shopping galleries and the Church of Santa Croce in the main square. On the triangular Piazza Matteoti there is a monument to the navigator-traveler Giovanni da Verrazzano. In front of the Town Hall you can see the Gallo nero, the figure of a singing black rooster, the symbol of Chianti. Near the main square is the Wine Museum. There are several wine shops and tasting rooms in Greve, and samples of red, white and sparkling Chianti can be ordered from special vending machines.

Despite the fact that this is one of the mandatory places to go from Siena, you can get to Greve in Chianti by bus in 2.5 hours.

And only with a transfer. From Siena-Via Tozzi, take route 131R, via Florence’s Sita Firenze bus station. In Florence, change to 365A and go to Greve Piazza Trento . The cost of your trip will be 7-11 €.

Is it worth planning all these excursions?

Yes, if you want to. But we must consider that only Monteriggioni and San Gimignano are not far from Siena. All other towns and villages, although located in the region of Tuscany, are not very accessible by public transport. A decent number of transfers and traffic intervals.