The 10 best dishes of Israeli cuisine: what to try a tourist

The modern Israeli cuisine should not be confused with the old Jewish classics. Traditional dumplings kreplach or chicken broth with kneidlakh are not cooked in every restaurant in Tel Aviv. Their place has been taken by Arabian snacks and Mediterranean dishes. Israeli cuisine – a bright mix of eastern, European and Jewish cuisine. We tell you what to try from the food tourists in Tel Aviv, Haifa, Jerusalem and at Israeli resorts. Names of dishes with descriptions and pictures will help not to get confused on vacation. 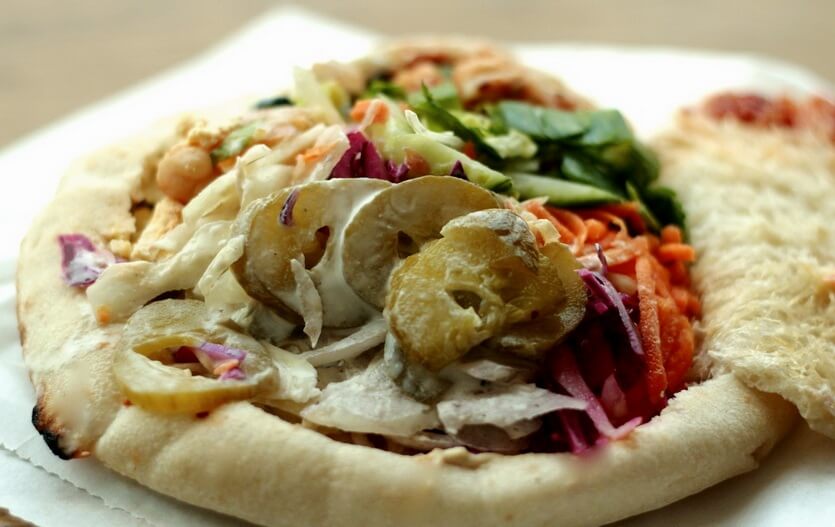 Israeli street food sabich (or sabih) is similar to Arab shawarma with eggplant instead of meat. Be sure to try it at local eateries or markets. The thin flatbread with a diameter of 12-15 cm is opened and generously stuffed with appetizing stuffing. For it, the chef fries slices of eggplant and shreds boiled eggs. He also adds hummus, fresh vegetables, juicy parsley, and sometimes potatoes or pickles. The tangy mango sauce makes the appetizer spicy, and the sour tahina successfully quenches that “fire. This Israeli street food conquers even those who are used to meat shawarma. 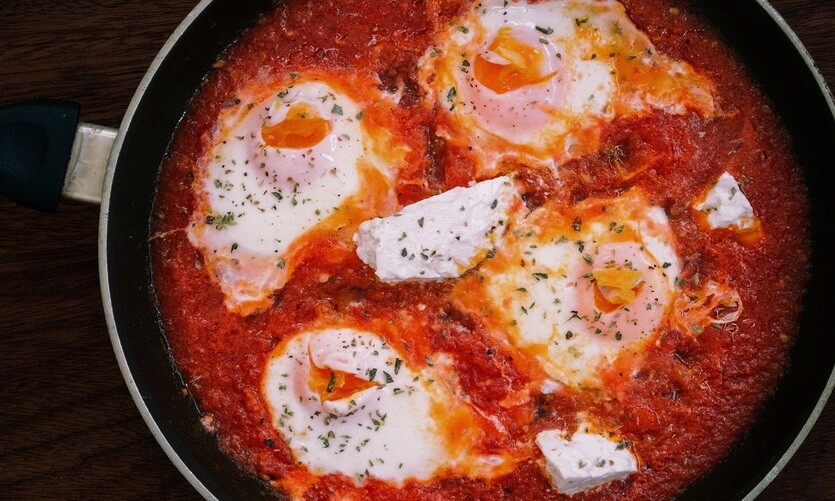 For breakfast in national restaurants or hotels in Israel is customary to prepare tomato scrambled eggs. It is said that every family has their own recipe for this dish. The classic shakshuka is made of 3-4 eggs, meaty tomatoes, juicy peppers, crispy onions, herbs and cheese. The chef prepares the glazed egg with the vegetables and adds a generous portion of paprika, zira, turmeric, chili, garlic and other spices for spice. The result is a hearty breakfast in a tomato-based filling that still crunches and sizzles in the pan when served. 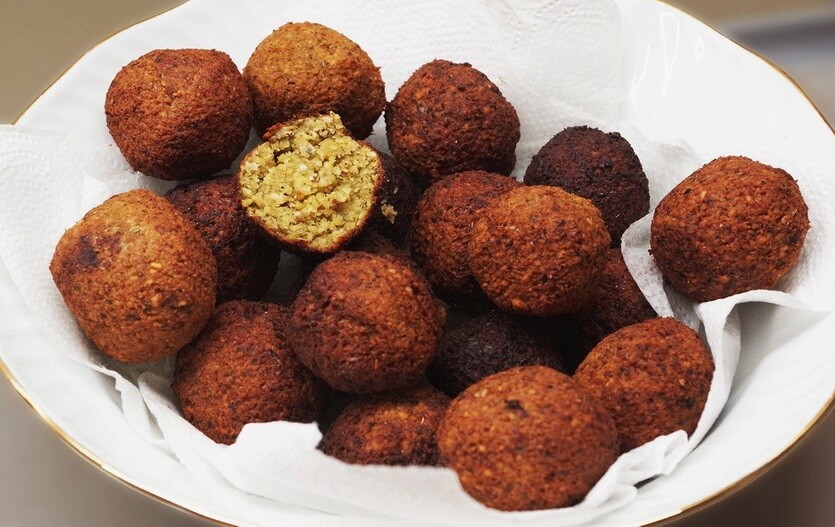 The mouthwatering, crispy balls of falafel resemble meatballs. However, they are made with chickpeas or peas. The snack has a spicy and slightly tangy taste because Oriental spices are always added to the “minced meat”. The beans are grinded with a meat grinder or mashed by hand, formed into balls, and deep-fried. Hence the characteristic texture of the crumb. Falafel has become a symbol of Israeli cuisine. It is served with pita bread, vegetables, and tahini pasta. They also make a vegetarian version of shawarma in a pita. Tourists have nicknamed this street food the Jewish hamburger. Be sure to try falafel in Israel, even if you think you don’t like chickpeas, beans and other “vegan” stuff. Especially good street falafel – from the market or from outdoor eateries.

READ
What you need to know going to China 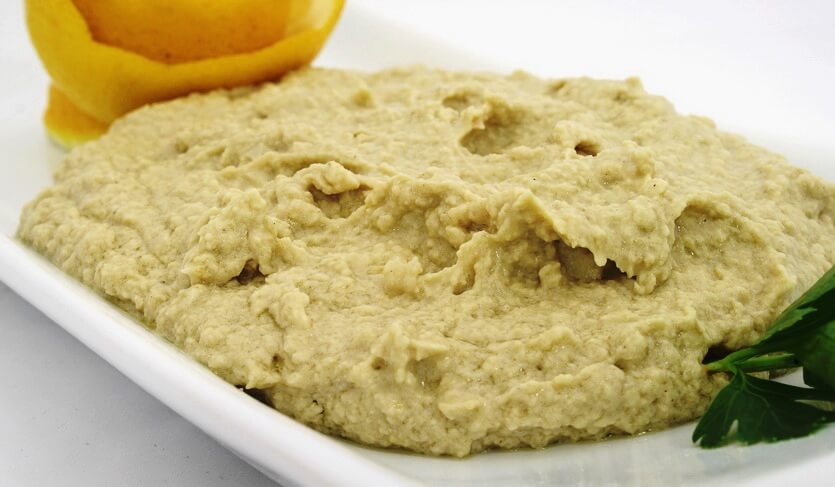 This is something to eat in Israel is a must. In Arab countries hummus is commonly served as a cold appetizer or sauce with vegetables. In Israeli cuisine, it is considered an independent dish. Only in this country, it can be tasted in a hot form. Hummus is made from boiled chickpeas. The beans are mashed and topped with tahini paste and lemon juice. In Israel, the snack is always particularly flavorful. Locals like to vary hummus with smoked paprika, roasted pepper flakes, juicy tomatoes, and fresh herbs. Try the appetizer with a warm crispy pita – it’s fantastic! The best in Israel is considered a Jerusalem hummus. 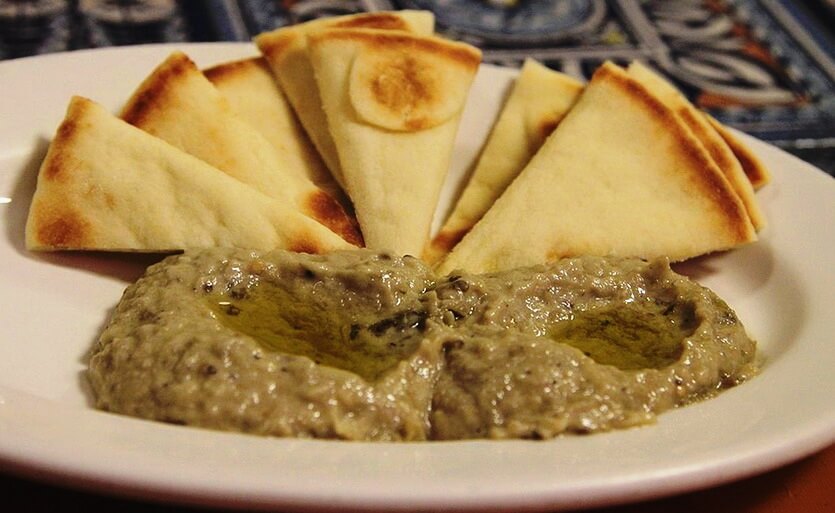 It looks like hummus, but tastes nothing like it. Baba ganoush is the Israeli national dish of baked eggplant. The vegetables smell smoky because they are grilled or cooked over an open fire. They are mashed, topped with golden olive oil and stringy sesame paste, and drizzled with juicy lemon. The appetizer is served with a crispy pita, sprinkled with hot cayenne pepper, and garnished with herbs, nuts, or pomegranate seeds. It is a frequent guest at hotel buffets in Israel. 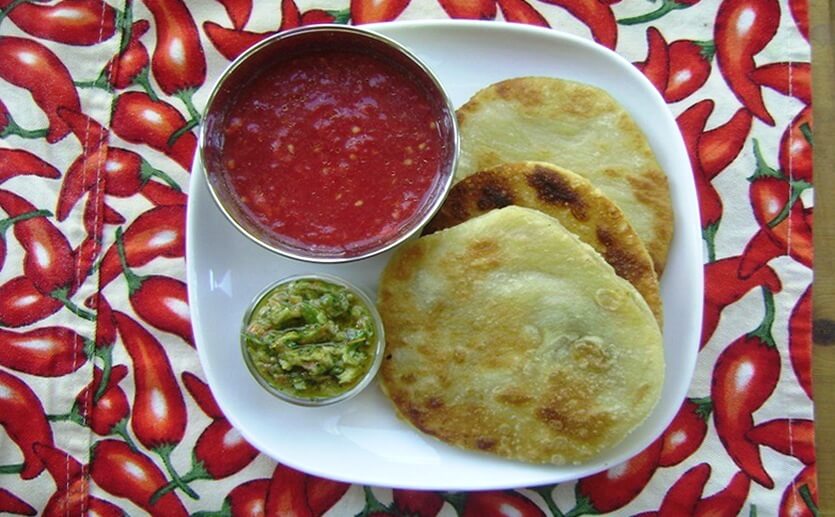 The peculiarities of Israeli cuisine were formed under the influence of its neighbors. Malawach was introduced to it by Yemeni Jews. The appetizer caught on and became a popular street food of modern Israel. Outwardly, the dish resembles ruddy pancakes made of puff pastry. They have a special flavor because the cakes are baked or fried only in butter. Malahuah should be tasted with mashed fresh tomatoes, a spicy chili-based schnug sauce, and boiled eggs. The same pancakes are eaten for breakfast in Israel with honey, tahini paste, or sugar syrup. 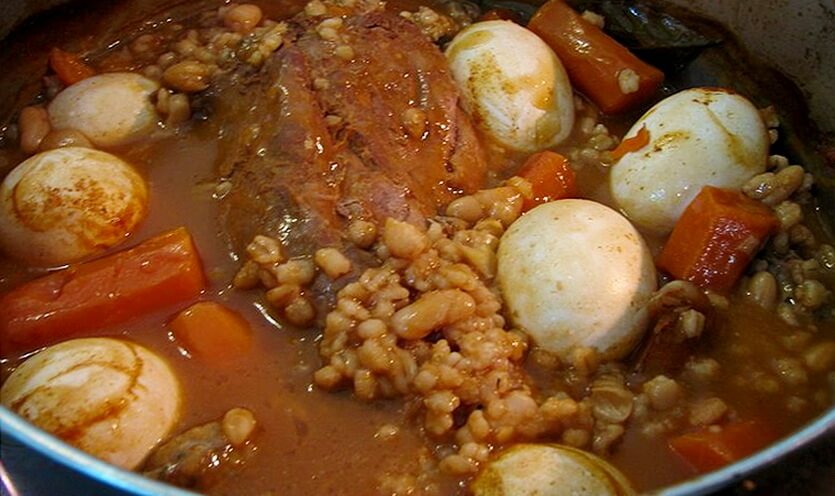 Also known as hamin. The traditional Jewish dish of beans has caught on in modern Israeli cuisine. The classic version is made of meat, beans, any kind of cereals, potatoes, and boiled eggs in their shells. The cholnt is boiled the day before serving. Eggs become soaked with juice and take on a brown hue. They are peeled, sliced, and mixed into the dish. Honey and hot peppers give the treat an unconventional spicy-sweet taste. Order a plate of cholnt at a restaurant serving national Israeli cuisine, snack on a crunchy cucumber and pita with hummus and the tourists are usually delighted. 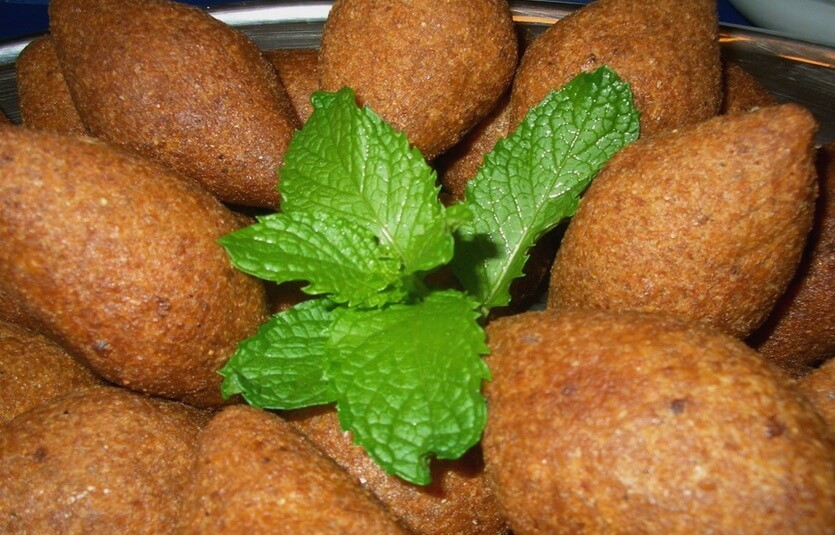 These fluffy bulgur meat patties came to Israel from Lebanese cuisine. They are now considered a national dish. The combination of the grits with meat or other filling creates a contrast of flavors and textures. Be sure to try kibbeh in Israel. The bulgur casing with allspice, cloves, nutmeg and other aromatic spices turns out slightly crispy and crumbly. Underneath it there is a juicy filling of meat with onions, nuts, pumpkin or roasted vegetables. In Israel, you should try kibbeh with a salad of fresh vegetables, yogurt sauce and juicy greens. 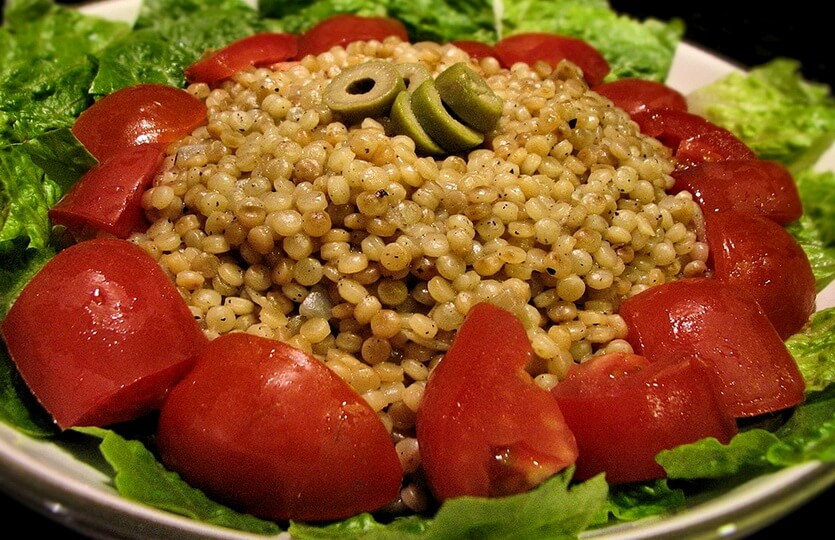 This dish is known as Israeli or Jerusalem couscous. The grits have larger grains, similar to Turkish bulgur. It is used to make a whole group of dishes of the same name. They can be cold or hot. As an appetizer in Israel should try a salad ptitim with greens in a yogurt dressing. And also of fried cereals with vegetables, spices and pine nuts. In the hot form ptitim is cooked with meat or chickpeas, added large chunks of onions, carrots, tomatoes and generously spiced. You must try these hearty treats; they may look simple but their rich taste never fails to amaze tourists. 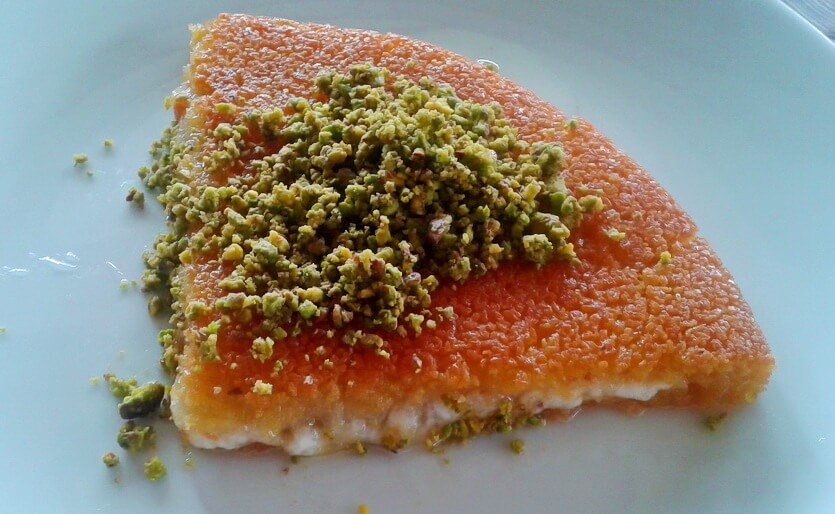 For dessert in Israel, a sweet and creamy kanafeh pie is a must. The thinnest vermicelli deep-fried to a ruddy crust, the thickest hot cheese, sugar syrup, and some pistachios – the combination is incredible. The creaminess smoothes out the dessert’s lusciousness, and the nuts add zest. Knafe is an Israeli sweet in the form of rolls or pie, cut into slices. The dessert often appears on hotel buffets.

Watch a short video about street food in Tel Aviv.

Tourists from Europe book gastronomic tours in Israel at any time of year – demand continues to grow. Travelers from Russia has not yet fully taste such tours, so their choice is not too great. We have selected proven tours in Israel in Russian – all with tastings.

Group tour of Jerusalem with a Russian guide. You will stroll through the streets loved by locals and learn the history of the struggle of European powers for the Holy Land. And then visit the best market in Israel, which presents the cuisine of more than 100 Jewish communities. At Mahan Yehuda you are guaranteed tastings, even if you don’t plan to buy anything. Halva, fruit, sweets, traditional delicacies… It’s a sight to behold! It will be interesting, delicious and informative. View the tour program you can at this link.

Individual tour in Tel Aviv in Russian. You will go on a tour of the wineries around the city. What kinds of grapes are unique in Israel? What traditions and techniques are used by local winemakers? What wine is considered the best in Israel? You will taste dozens of varieties of the drink with homemade appetizers. You will also learn how to choose the right wine and buy what you like. View the tour program here.

Tour in Tel Aviv with glowing reviews: individual or for organized groups – check out the rates in the tour description. Breakfast in the countryside, family wineries, tasting of exclusive drinks – this is a complete vacation in the countryside with an unusual immersion in the gastronomic theme. Lunch will be prepared with farm products before your eyes. If you want, the guide will turn it into a culinary master class. The tour lasts half a day, but the time flies quickly. Read the reviews of the tourists – they love it!

Before your trip, check out our shopping guide. We talked in detail about what to bring from Israel tourists as souvenirs and gifts for loved ones.

The country’s cuisine is characterized by a great variety. The combination of Arab and European cultures had a significant impact on the taste preferences of Israelis. At the same time the cuisine of the country differs from Jewish cuisine, as it is based on the Oriental (Turkish, Arabic) and European recipes. For example, burekas (pastries made of unsweetened puff pastry), oriental fast food (reminiscent of shawarma), beloved by many hummus and the so-called “Turkish” spicy salad, actually invented by Israeli chefs.

Gastronomic tour in Israel is impossible to imagine without the Ashkenazi cuisine, which is based on recipes from the Jews in Europe. You can try it in most restaurants in the country. They differ in the simplicity of preparation and inexpensive ingredients. This is explained by the fact that the Jews who inhabited the European countries, were mostly poor and therefore used the products rationally.

The most popular dishes of Ashkenazi cuisine are: 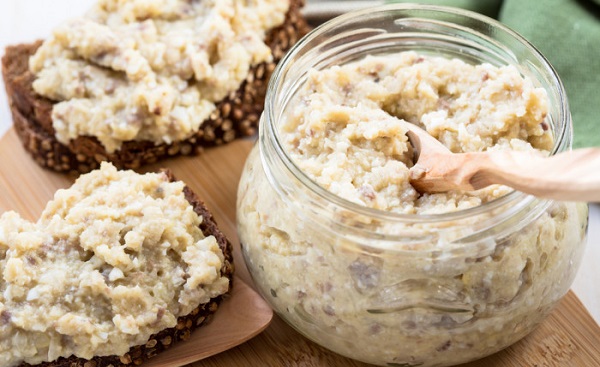 Oriental (Arabic and Turkish) cuisine has had a great influence on Israeli cooking. It brims with all kinds of dishes with unique flavors. The abundance of meat, fish, seafood and vegetables leaves no one indifferent. It is also difficult to imagine Oriental cuisine without sweets and pastries to satisfy any taste. Many dishes are very caloric, since their recipes abundantly contain butter and olive oil, rice, flour, meat, and animal fats.

READ
The best places in the world for honeymoons

Oriental dishes are of the greatest biological value if combined with meat products and vegetables. Stuffed fish, kugol, stuffed chicken neck can serve as an example. Jewish cooks are also credited with the invention of horseradish sauce and beets.

Israeli cuisine consists of traditional Jewish dishes as well as dishes borrowed from other nations. It includes most of the foods that have long been used in Mediterranean and Middle Eastern cuisine. As for the modern dishes that are now offered to tourists in Israeli restaurants, they have been introduced into the country’s cuisine for many decades. Their main difference from traditional dishes is low calorie and healthy. Israelis eat a lot of fish products, vegetables, fruits and cereals. Most of the fats used in cooking are of vegetable origin and are made from olives, olives, avocados and nuts. One of the healthiest traditional dishes is hummus. It contains a lot of fiber and an optimal balance of proteins and carbohydrates. Thus, the cuisine of Israel is a gastronomic paradise for foodies of all countries.