Receive in the mail once a day one of the most read articles. Join us on Facebook and VKontakte. 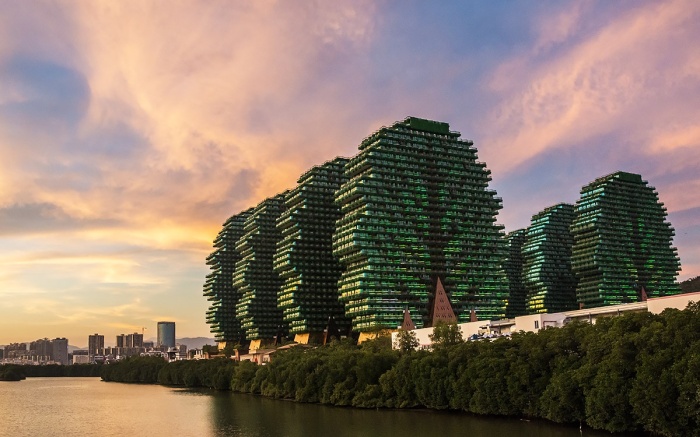 One of the most popular vacation spots in coastal China is the city of Sanya. In this picturesque place is a hotel complex in the form of giant trees, as if assembled from Lego cubes. Fantastic ensemble not only decorates the skyline of Sanya, it is the largest hotel in the world, which can offer almost 7 thousand comfortable rooms and a lot of unforgettable experience. 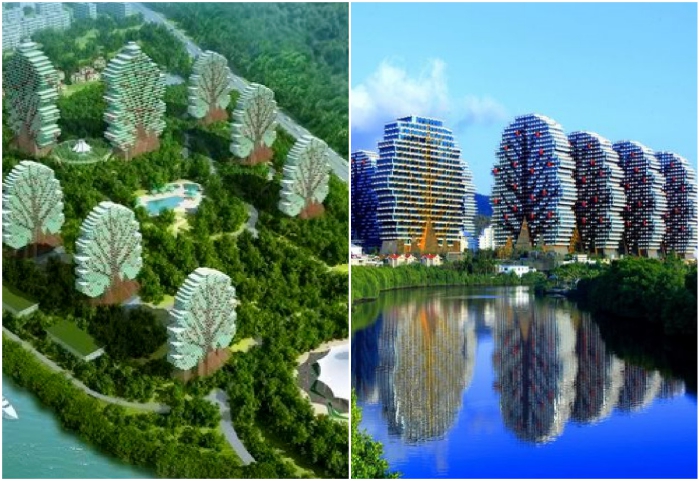 This is not a conceptual project, but a real hotel complex of skyscrapers-trees Sanya Beauty Crown Hotel Tower (Sanya, China).

For decades China has been astonished by its architectural achievements, including a landmark that appeared in the southern part of the country, in the city of Sanya. Beauty Crown Hotel Tower is a complex of skyscrapers that distinctly resemble giant trees assembled from Lego bricks. 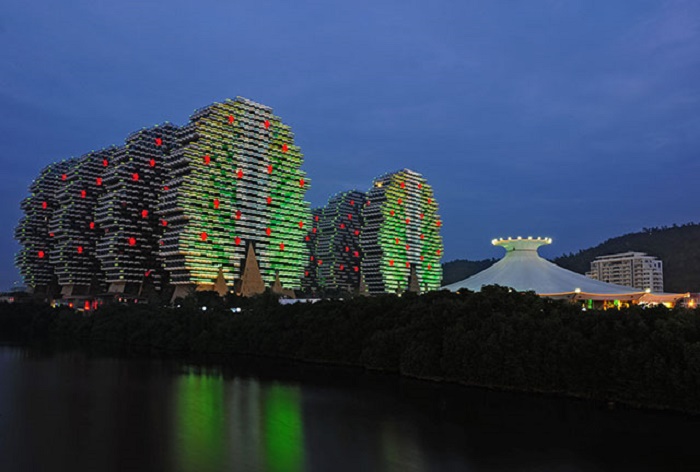 Sanya Beauty Crown Hotel Tower consists of 9 towers, the height of which is over 100 m. | Photo: dailymail.co.uk.

Interesting fact from Novate.ru: A large-scale tourist hotel cluster Sanya Beauty Crown Hotel Tower consists of a 116-meter skyscraper, where the 7-star hotel is located, two 111-meter towers of platinum five-star hotel (26 floors each), the remaining 6 “trees” are 110 meters high (32 floors), they are equipped with different level hotels and apartments. It is difficult even to imagine, but the total area of the buildings is 500 thousand square meters, and 6668 rooms are created in this giant cluster. Thanks to this cosmic figure Sanya Beauty Crown Hotel Tower is considered the largest hotel in the world. 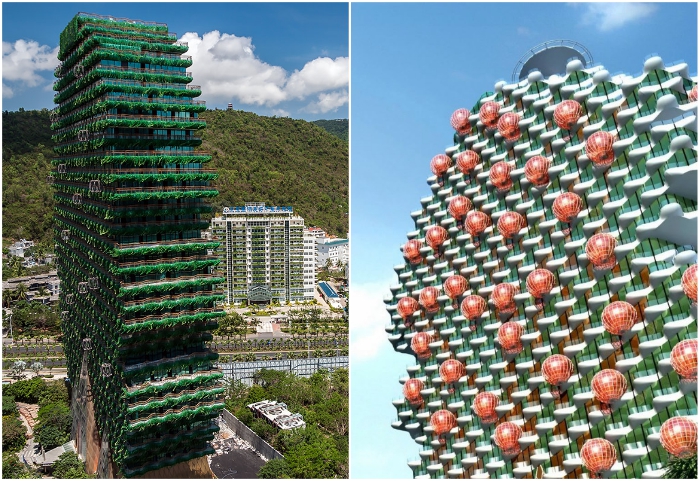 Due to non-standard shape of the buildings and protruding modules they managed to double the usable area (Sanya Beauty Crown Hotel Tower, China).

The sheer number of small bays and external modules, creating a tree-like structure, almost doubles the usable area. Thanks to an unconventional approach to expanding the space, it was possible to organize the maximum number of luxurious objects for guests and residents.

READ
Museum of Cat in Minsk. A place that will not leave you indifferent 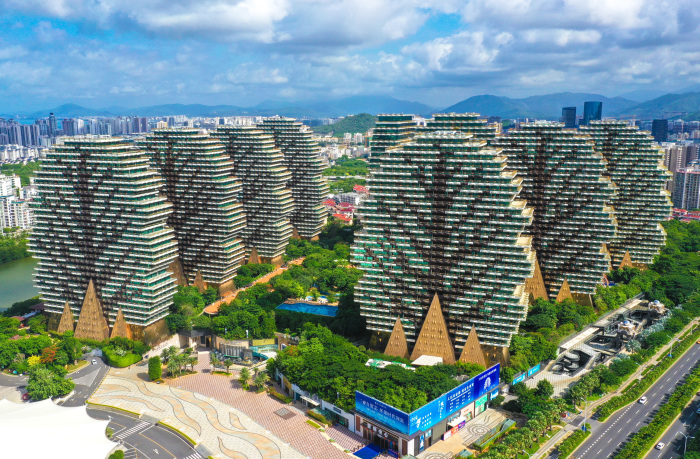 By using different colors of glass and the shape of the canopies, we managed to create an image of trees with fruit (Sanya Beauty Crown Hotel Tower, China).| Photo: sanya.sanyahotel24.com.

Despite the fact that the complex of 9 skyscrapers, which crossed the 100-meter height, was commissioned in 2012, it began receiving guests only in 2016. It took 4 years for each corner of the giant cluster to meet all requirements and standards, not only common service standards, but also the trends of “green” architecture. This is evidenced by the shape of the buildings themselves, the greenery decorating the facades of the skyscrapers, and the arrangement of natural areas in the surrounding territory, which is as much as 202 hectares. 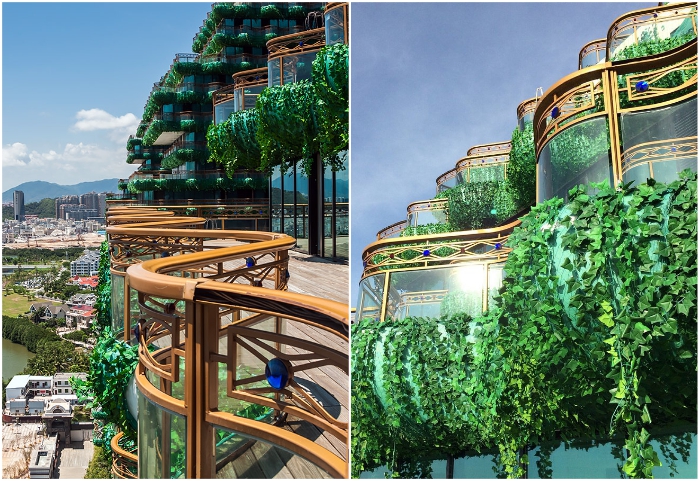 Plus, environmentally friendly materials with zero carbon emissions were used in the construction of the facility, and innovative energy-efficient systems were implemented to use natural energy to cover the needs of the complex, as well as a water recovery system. 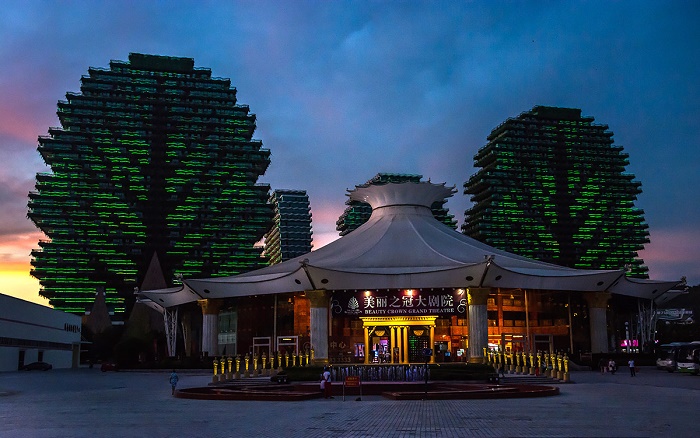 Given that the complex has rooms of different categories, even the most fastidious guests will be satisfied with the luxurious rooms and services, comfort and fantastic views from the windows and balconies, from which hang the branches of exotic plants. A lot of pleasant services and entertainment are also provided for the guests of the hotel. 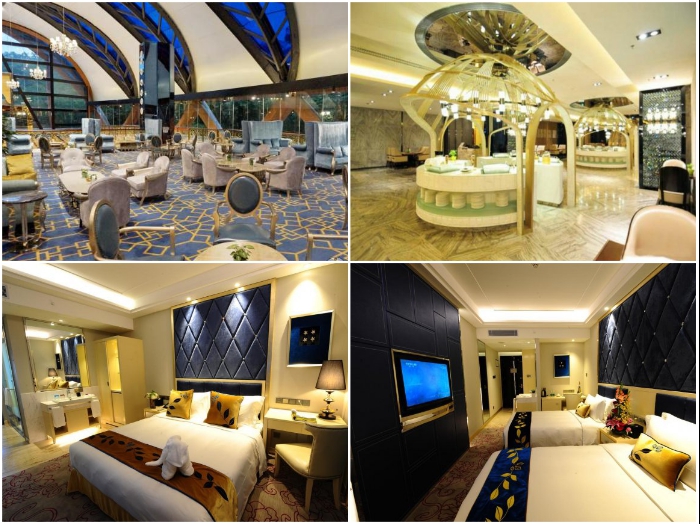 Several stylish restaurants offer local and international cuisine, as well as cozy cafes and bars. Guests can relax near the pools or enjoy the performances, concerts, beauty contests in the theater, designed for 3.5 thousand seats. Shopaholics will also find entertainment in the shopping area, as well as in the underground shopping complex with a lot of different boutiques and shops. 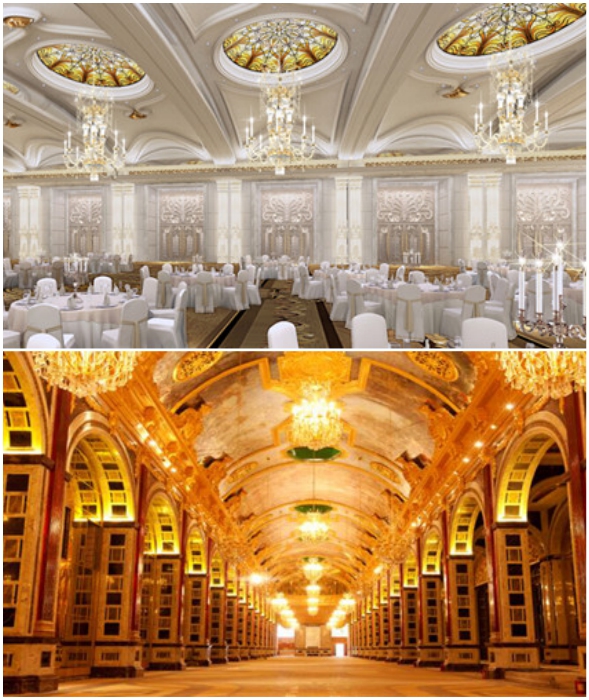 READ
Wales is a state of the United Kingdom of Great Britain.

According to Novate.ru, Sanya with its idyllic green mountains and tropical weather has long been one of the most popular coastal China destinations. The city especially attracts affluent tourists – lovers of yachting vacations. Therefore, it is not surprising that the hotel complex has its own yacht club. As part of the hotel expansion the owners are also planning to build the largest marina in the center of Sanya, which will provide an influx of “elite tourists from around the world”.

But before that happens Sanya Beauty Crown Hotel Tower offers huge conference halls, IMAX cinema, wedding chapel, holographic room, squash court, spas, gyms, helicopter pad and for the extreme there is even a Boeing 737-800. Some of these entertainment areas are located in the underground floors, which are connected between all the buildings by impressive passages and galleries. 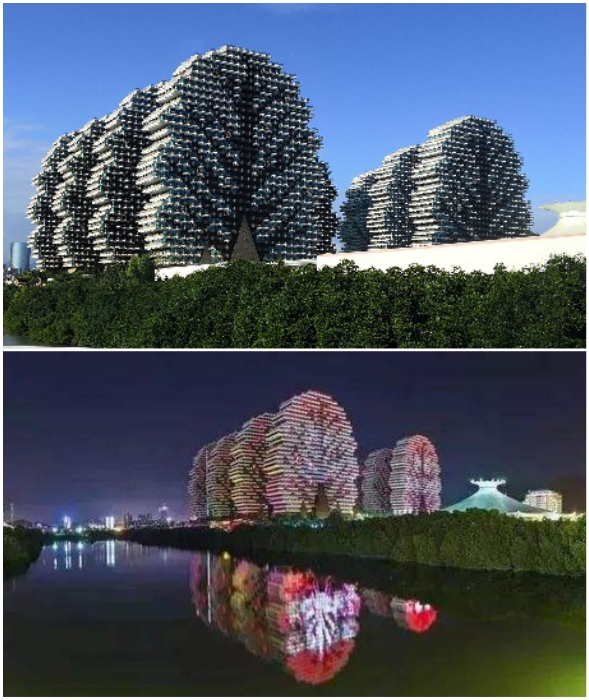 The tree houses also look spectacular during the day, but after 8 p.m. they are especially good (Sanya Beauty Crown Hotel Tower, China).

Note: The complex of impressive skyscrapers of Sanya Beauty Crown Hotel Tower attracts not only tourists, but also the organizers of the Miss World beauty pageant. Since the 3,500-seat marquee theater was built before the complex was commissioned, the pageant has been held in this heavenly spot for several seasons. Before the coronavirus pandemic, seven finals were held on the property! 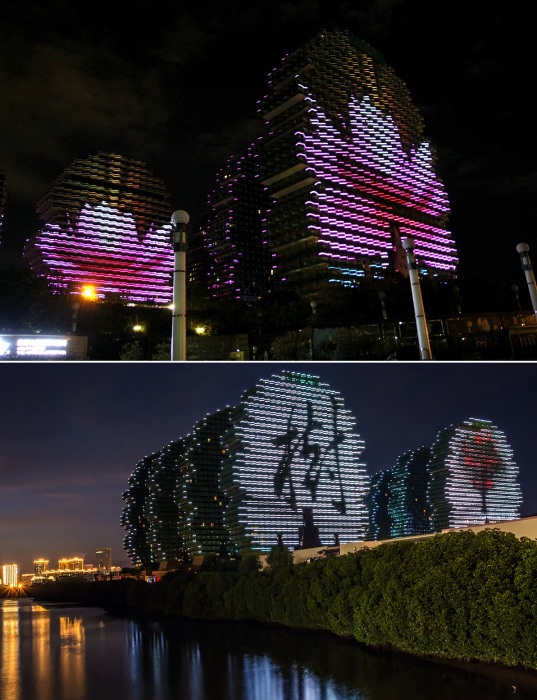 A nighttime light show on the facades of the skyscrapers of the Sanya Beauty Crown Hotel Tower tourist complex.

In the daytime the skyscrapers look impressive but childish, but not without reason the complex is called Lego hotel, but when it gets dark the real light performance begins. Animated lighting integrated into the facades of the buildings creates fascinating images of blooming flowers and trees, floating fish, flying dragons, calligraphic hieroglyphs, state and national symbols, which can be admired all night long.

This is not the only unique project implemented in the Middle Kingdom. More recently, the construction of the futuristic Songjiang InterContinental hotel integrated into the steep rock of a 90-meter quarry was completed.

Some trees are so large that buildings can be built not out of them, but directly in or on them. And today we’re going to tell you about five of the most visible and striking examples of wooden architecture, in the creation of which not a single tree was damaged. 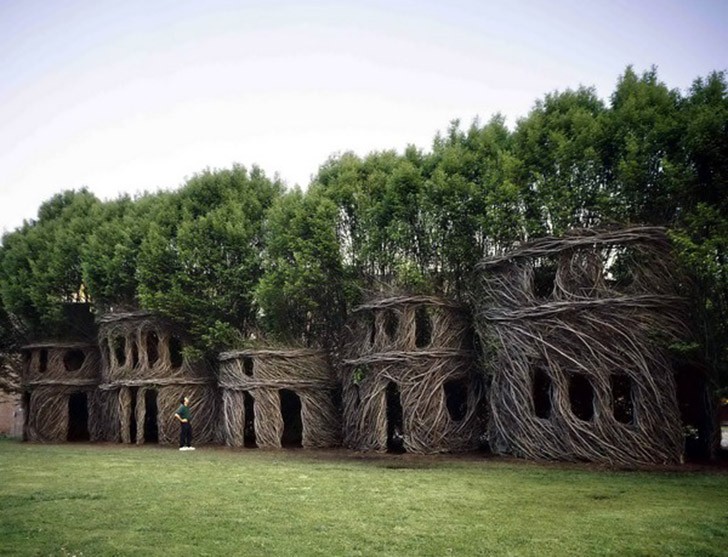 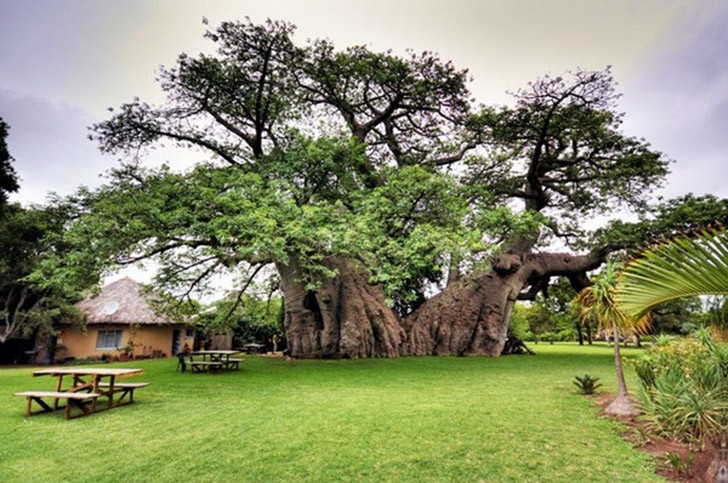 Baobabs are not only the largest trees in the world, but also the oldest. They can live for several thousand years, reaching truly enormous trunk sizes comparable to a private home. There is such a record-breaking baobab in the South African town of Mojajiskloof in Limpopo Province. It is known all over the country not only for its age of six thousand years (!), but also for the fact that inside the tree is the Sunland Baobab Pub. Of course, most of the institution is located outdoors in the shade of the branches, and inside there is a kitchen and a small room for just a few visitors. 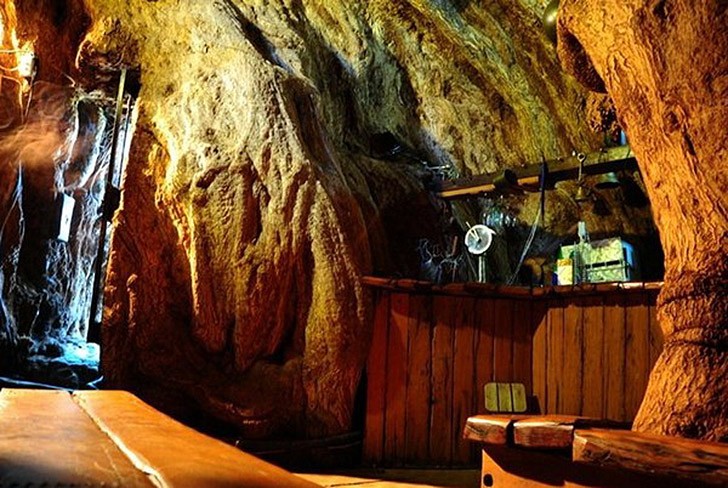 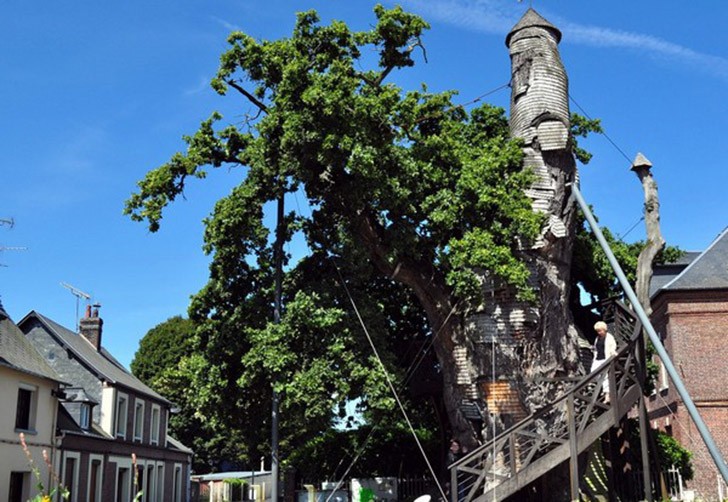 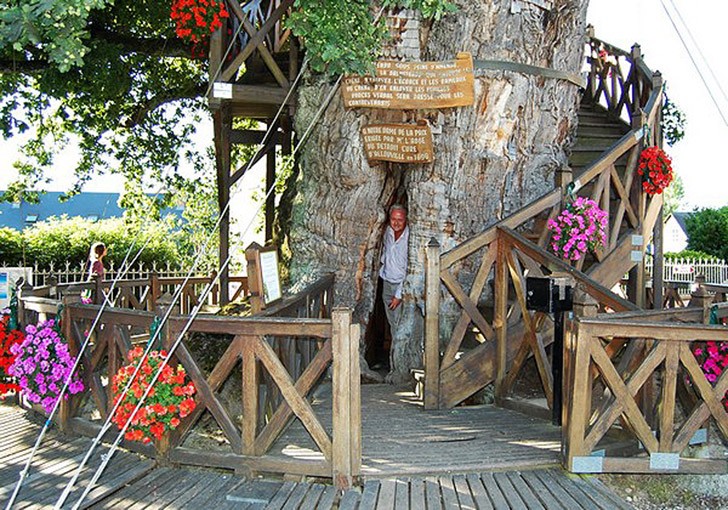 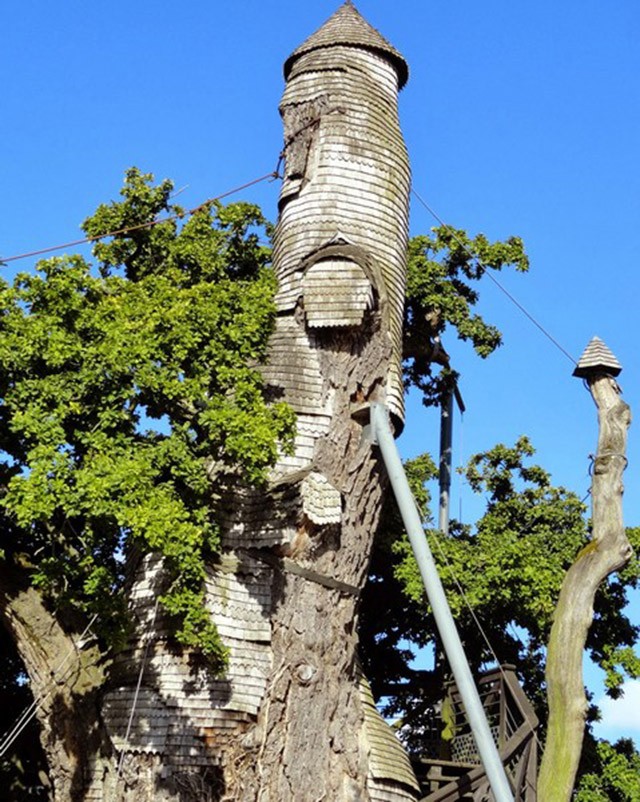 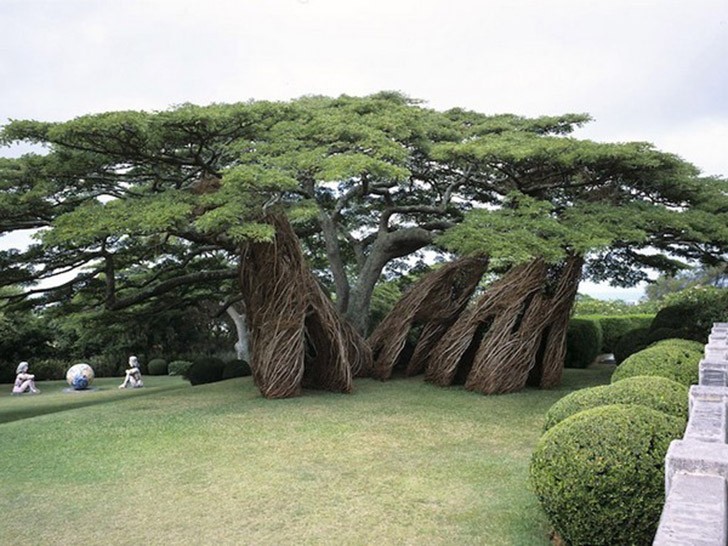 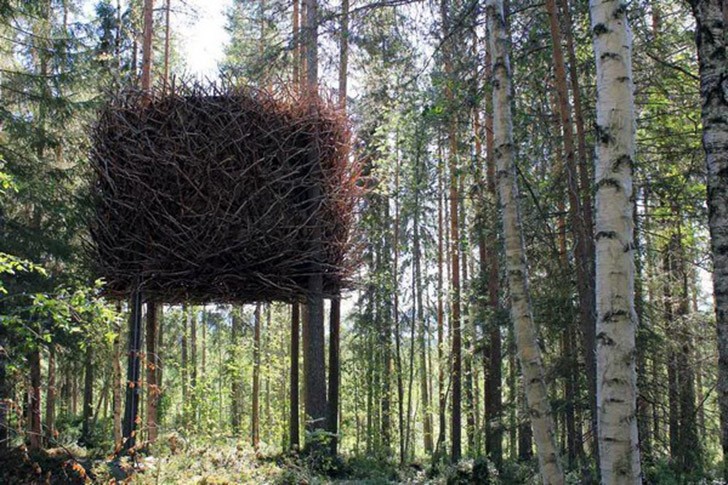 For several years there has been Tree Otel hotel in Sweden – one of the most unusual hotels in the world, where each room is a uniquely shaped tree house. And in 2014 this institution opened a new building – The Bird’s Nest. 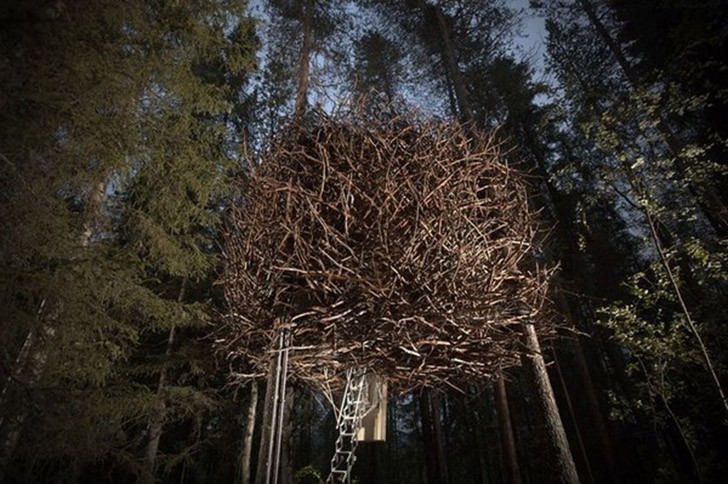 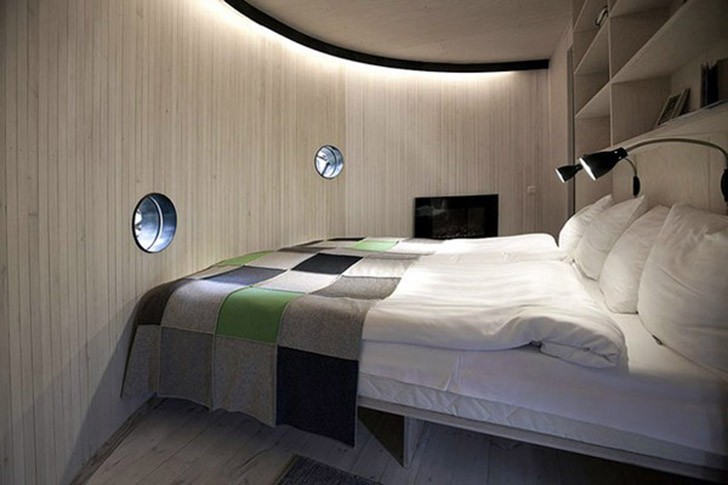 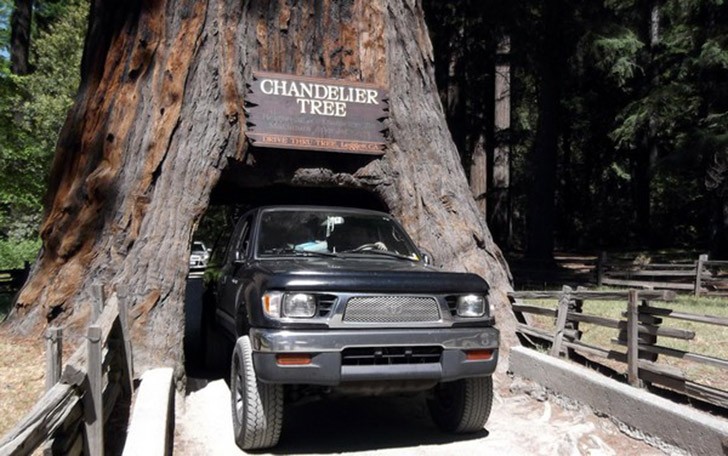 On the outskirts of the California town of Leggett there is a national park, an area where giant sequoias grow. One of the attractions of this place is the so-called Chandelier Tree, growing right in the middle of the road. However, the passage of cars and people passage, it does not interfere with, because inside the plant in the thirties of the 20th century a tunnel was cut through.