Viña del Mar is located in central Chile, 8 km east of Valparaiso and is actually its satellite town with a population of 286,000. It is one of the most popular resorts of Chile, loved by influential and wealthy citizens of the country. The city on the Pacific coast still has a sense of romantic antiquity of the colonial period, the buildings of the 19th and early 20th centuries, numerous parks and castles enhance this impression. In translation from Spanish the name of the city sounds like “vineyard on the seashore. Steeped in greenery, the city fully lives up to its name. Tourists love it for the beauty of beaches, the quality of hotels and a lot of opportunities for a beautiful beach holiday. However, keep in mind that the Pacific beaches of Chile are known for big waves and cool water, which is brought to the shores of South America by the cold Humboldt Current from Antarctica. The best time to visit Viña del Mar is from October to March.

José Fernández Vergara is considered the founder of the city, after whom several streets and parks are named. His house, built in the Venetian Gothic style, now houses the Museum of Fine Arts, and the palace itself is surrounded by beautifully sculpted gardens.

Vergara embankment is a favorite stroll place for residents and visitors of the city, with many hotels, restaurants and souvenir shops. The Castillo Wolf Palace, built on the promontory, is clearly visible from the promenade. This building in the form of a medieval castle, along with a huge flower clock is a symbol of the city. The clock has an authentic Swiss mechanism that was given to Chile in honor of the World Cup in 1962.

Palacio Carrasco is another monument of architecture, carefully preserved for posterity, now houses the cultural center of the city and the palace of Rioja, built for a banker from Valparaiso, designed by a French architect.

The municipal casino, the center of gambling in Viña del Mar, Chile and South America, is known worldwide.

The National Botanical Garden will showcase unique plants, including a collection of cacti and plants from Easter Island, and exhibits in the Museum of Archaeology and Natural History will tell the history of Chile. One of the city’s trendiest beaches is Renaca, with gorgeous white sand.

If you want to enjoy the beauty of pristine nature and coastline, with beaches and cliffs, choose a hotel by the sea. Viña del Mar offers five-star hotels, such as the Sheraton Miramar Hotel & Convention, inns, mini-hotels and apartments. The most popular for value for money are the Hotel Oceanic Vina-del-Mar, Casa Patrimonial Little Castle Vina-del-Mar, Hotel Cassinetta and Gala Hotel & Centro de Eventos. The latter also offers babysitting services, which is important for tourists with children. 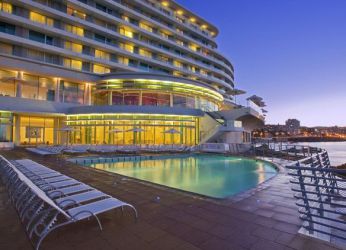 All cafes and restaurants without exception offer an excellent selection of wines. And for a cup of coffee you can go to Cafe Terra Moro El Tintico de Botero.

From the capital of Chile, Santiago to Viña del Mar or Valparaiso you can take a bus that leaves from the main terminal in the capital; such a trip takes an hour and a half. The bus station is located in the center near the Plaza Vergara. From Valparaiso to Viña del Mar you can comfortably take the metro in just 15 minutes.

Viña del Mar is a resort town on the coast of the Pacific Ocean, located 120 kilometers northwest of the Chilean capital Santiago. Here in the early twentieth century Chilean bankers, industrialists and businessmen actively built their majestic mansions, who preferred to spend time with their families in the fresh air and in beautiful surroundings. Next door we found the older but very touristy town of Valparaiso, which has a major port. We came to Viña del Mar for a week to see if this modern city was a good fit for us.

So, we arrived at the Santiago bus station and took the Pullman bus to Viña del Mar. We chose this particular company because their buses were recommended to us as the most comfortable. The fare was 9000 pesos, but we bought the tickets at the bus station ticket office right before the departure – with a discount it was 5000 Chilean pesos per person.

However, our bus was delayed, and while we were waiting for it, several buses of other companies left in the direction of Vigna and Valparaiso. So there are plenty of options there: you can come and buy a ticket for the next flight.

The drive from Santiago to Viña del Mar is not long, about two hours. The road is toll-free and therefore smooth, without traffic lights and traffic jams. The bus terminal in Viña del Mar is in the city center, but at some distance from the coast, where most of the accommodation is located. Therefore, it is worth taking a cab from the bus station to the hotel or apartments.

Good to know: There is also an option to go to Viña del Mar directly from Santiago airport. There you can order an individual transfer, which costs about $100.

Where to stay in Viña del Mar

We chose a two-bedroom apartment on the 23rd floor in the Miramar 1 tower overlooking the ocean. And we were very happy with our stay there. Since our goal was to travel in “staycation” mode, Viña was just the right place for us.

The climate in Vigne del Mar is quite good: even in winter it is quite warm, the air temperature is about 17 degrees. In summer it is hot, but the wind from the ocean is refreshing. The weather is somewhat reminiscent of Los Angeles.

What to see in Viña del Mar

In Viña del Mar itself, there are not so many sights that you should definitely see. It is an old 19th century Chilean resort, and in the early 20th century it became very fashionable.

From those times, Vigneault has left luxurious mansions turned into casinos, hotels, museums, restaurants, and so on. Now, however, ordinary people live in the city, go to the local beaches and relax. Many Santiagoans come here in the summer when the capital city gets hot.

So what is there to do in Vigne?

Personally, we mostly strolled along the promenade and along the beach, went to the South American Fair, and visited the Fonk Museum. Took the metro to Valparaiso twice and walked around the city a few times.

We also drove around and saw almost all the diversity of Chile’s Pacific coast in the region: dunes, beaches, port villages, pine forests, and even penguins!

Our walk around Viña del Mar

Viña del Mar’s main beach, Caleta Abarca, is located at the intersection with the main streets of Viana and Alvarez. Vigna’s best hotel, the Sheraton, is also located next to this beach.

Caleta Abarca beach in the morning

Not far from the central beach you can also see the city’s famous symbol, the Flower Clock (Reloj de Flores) . At the beginning of 2020, it had no hands.

After looking at the Pacific Ocean, we took a promenade along the shore, remembering our walks along Lima’s waterfront.

There is another beach behind the Sheraton, and then we stopped by the Castillo Wolff ( Castillo Wolff) museum and exhibition hall. Here you can read about the history of the city, but mostly tells how the German entrepreneur Wolff came to Viña and founded his company here.

READ
The surprising lives of the Swiss

Now his oceanfront house actually looks like a small castle, and the waves pound the rocks with such force that you can meditate for hours listening to the sound.

A curious restaurant, Cap Ducal, is a restaurant in the hull of a ship. We went inside – it was very atmospheric!

Then we got to Marina Street, which divides the city into two parts by a canal with water from the ocean. You can use the bridge to cross the canals. This place reminded me a little bit of Venice in Los Angeles.

By the way, the waves roll in so hard that surfers hang out here all the time and practice riding the waves of the Pacific.

Just off the canal is the Casino. Nearby is a small park on Plaza Colombia , and across the street is McDonald’s.

And then along San Martin Street begins the city’s longest beach – Sports – Playa del Depote . On the street you can ride a horse-drawn carriage (the cost of travel in a carriage – from 20,000 to 40,000 CLP, which is $ 30-50). Merchants are constantly selling souvenirs and drinks. All in all, a typical beach with a pier, where you can’t get lost.

We also visited the Museo de Arqueologia e Historia Natural Fransisco Fonck with mummies, skulls, stuffed dinosaur bones and a collection of insects. Curiously, in front of the museum is a real statue of moai from Easter Island! We missed the famous icons so much that we were very excited to see them again.

In the museum itself you can learn about the ancient history of Chile and there are even mummies from the Atacama Desert and other fears of the continent. On the second floor of the museum there are stuffed animals and birds that inhabit the country.

I would also advise you to check out the Palacio Carrasco library building. Who misses beautiful architecture in South America – there are several examples in Vigne.

We also visited the Museo de Artes Decorativos, located in Palacio Rioja. We visited the 1909 building itself and all its rooms with authentic pieces of furniture, and then in the main hall we had a musical evening for our guests.

The mansion with a beautiful garden is itself a work of art and is protected by the state as a particularly valuable historical site, telling the story of life in the early 20th century.

Our impressions of Viña del Mar and review

Is it worth going to Viña del Mar?

In our style of long trips, we were very comfortable staying in Vigneault. But if we were limited on time and our destination was Valparaiso, I would have preferred to live there. The good thing about Viña is that it is a modern town compared to other beach or historic towns in the region.

I liked that there is a convenient subway and there are places to walk around. But those are amenities for an extended stay or vacation trip. And for independent travelers, Viña is not as convenient as Santiago or Valparaiso. That is, in Viña del Mar you should stay in a hotel for 1-2 days and go on, or choose a good apartment with a view of the ocean, and then you can stay for a week.

Viña del Mar on the map

That’s the end of Viña del Mar. Have an interesting trip to Chile, dear readers!