A volcano in Mordor where the One Ring was created and destroyed. Mount Doom stood alone on the Gorgoroth Plateau in northwestern Mordor about 90 miles from the Black Gate. The mountain was 30 miles west of Sauron’s fortress, the Dark Tower.

The height of Mount Doom was 4,500 feet. The base of the volcano rose 3,000 feet: its high, gray slopes were rugged and covered with ash, cinder, and burnt rocks. The peak of the mountain had steep slopes and was about half the height of its base, about 1,500 feet. At the summit was a jagged crater from which smoke, fumes, and lava emanated. Beneath Mount Doom was an underground source of intense heat and perpetual flame.

A road led to Fateful Mountain from Morgul Pass southwest of the mountain. Another road, called the Road of Sauron, led from the Dark Tower to the eastern slope of Mount Doom. It was a wide road, paved with stone and ash. Its condition was monitored by Orcs.

Sauron chose Mordor as his state in the year 1000 of the Second Age mainly because of its volcanic mountains. He used the fire of the volcano for his magic and in 1600 he forged the One Ring in the Chambers of Fire. Sauron endowed the Ring with some of his own power and it could only be destroyed at the place of its creation.

Sauron escaped after the Fall of Númenor and returned to Mordor in 3320. He was furious when he learned that Elendil had also escaped and founded the kingdom of Gondor at the very borders of Mordor. As Sauron began to prepare for war, Mount Doom spewed flames. After that, the People of Gondor began to call it Amon Amarth, the Mountain of Doom.

At the end of the Last Alliance War in 3441, Sauron descended from the Dark Tower. He made his way to Mount Doom, where the power of the Ring was increasing. There he fought with Elendil and Gil-galad. All three fell in battle, and Elendil’s son Isildur sliced the One Ring from Sauron’s hand with a fragment of his father’s sword Narsil. Elrond and Kirdan advised Isildur to destroy the Ring in the Fatal Rift, but he refused.

Because the Ring remained intact, the spirit of Sauron was not defeated. Sauron returned to Mordor in 2942 of the Third Age, and in 2954 Fatal Mountain spewed flames again. The inhabitants of Ithilien near the borders of Mordor fled. In the years that followed, smoke still rose over Mount Doom.

At the Council of Elrond on October 25, 3018, it was decided that the One Ring should be taken to Mount Doom and destroyed. Frodo Baggins, Hobbit of the Shire, volunteered to do this.

On March 10, 3019, the Day Without Dawn came. From the bowels of Mount Doom darkness emerged and spread westward from Mordor over the lands of Gondor and Rohan. The darkness was sent by Sauron to instill fear and uncertainty in his enemies, as well as to aid his own army of Orcs. The darkness disappeared on the morning of March 15, the day Sauron’s forces were defeated at the Battle of the Pelennor Fields. It was still dark over Mordor, black smoke rising from the Mountain of Doom and black clouds covering the sky.

On March 24, Frodo and Sam Gamgee reached Mount Doom. They approached the mountain from the northwest. The volcanic gases made it difficult for the Hobbits to breathe and they had not had water for days. In addition, as they approached Mount Doom, the Ring pressed harder and harder against Frodo’s will.

READ
The fortress town of Dalt Vila on the island of Ibiza, Spain

On the morning of March 25, the strength of the Ring over Frodo grew so strong that he could not walk. He began to crawl up the slope, but Sam carried his master on his back. Halfway up, Sam discovered the Road of Sauron and followed it. At the bend in the road the Hobbits were attacked by Gollum. Frodo defeated him and continued on his way up. Sam threatened to kill Gollum, but, determined to keep him alive, followed his master into the Chambers of Fire.

At the edge of the Fatal Cleft the power of the Ring reached its maximum, and Frodo could not throw away the Ring and claimed it as his own. Sauron noticed Frodo, and all his thoughts went to Mount Doom. The Nazgûl abandoned the battlefield and headed for Mount Doom to distract Frodo. But at that moment Gollum attacked the Hobbit and bit off his finger with the Ring. Jumping for joy, Gollum lost his balance and fell into the Fatal Gap.

The Ring was destroyed in the Fatal Fire. The mountain shook and its fires roared. Smoke and lava poured from the Chambers of Fire and the mountainside split in half. Sauron disintegrated immediately after the destruction of the Ring, and the Nazgûl were destroyed in the fire of the erupting volcano.

Frodo and Sam escaped the lava flows to a small island at the foot of Mount Doom. Lava flowed down the side of the mountain, and ash flew from the sky. The Hobbits’ situation amid the chaos of the erupting volcano was extremely difficult, but Gandalf appeared with the Great Eagles Gwaihir, Landrowal, and Meneldor. The Eagles picked up the Hobbits and carried them to Ithilien.

READ
10 Things to Do in Bavaria, Germany

It has also been called Fiery Mountain (Fire-mountain) and Mountain of Fire.

Hike to the Fatal Mountain of Middle-earth

New Zealand has many mountains, hiking trails, hills and pristine beaches, but nothing compares to the Tongariro Alpine Passage . It is one of the nine great walks in the country, but everyone agrees that you can’t travel in New Zealand without at least trying this particular hike.

What is the Tongariro Alpine Crossing?

It’s a hike through some of New Zealand’s most popular volcanoes on the North Island, including Mount Doom and other areas of Mordor from the Lord of the Rings movies . It is located within Tongariro National Park, which was New Zealand’s first UNESCO World Heritage Site. 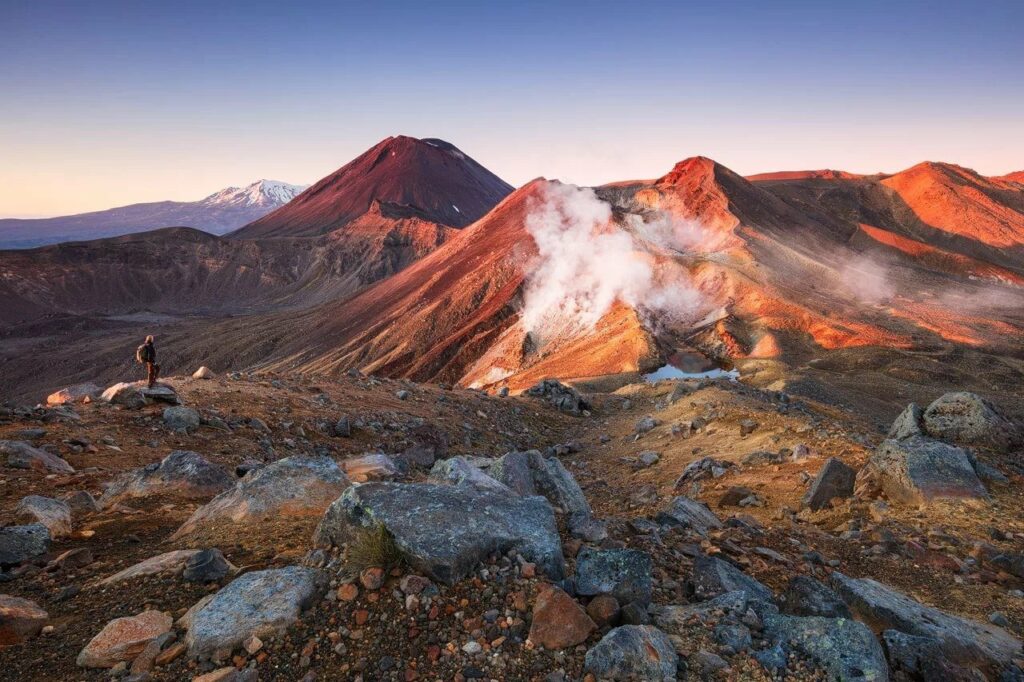 What is the Tongariro Alpine Crossing?

The New Zealand Department of Conservation also calls the park its oldest national park and dueling World Heritage Site, as it recognizes both the Maori spiritual associations with the area and the natural volcanic landscapes.

Before you start planning one of the most intense and colorful walks on the island, however, consider an alternative. If you have extra time and a map handy, you can try a full three-day hike called the Tongariro North Track. It covers most of the national park and includes the best views of Mt. Ruapehu, one of the three volcanoes in the park and the only one not accessible on the Alpine Crossing. 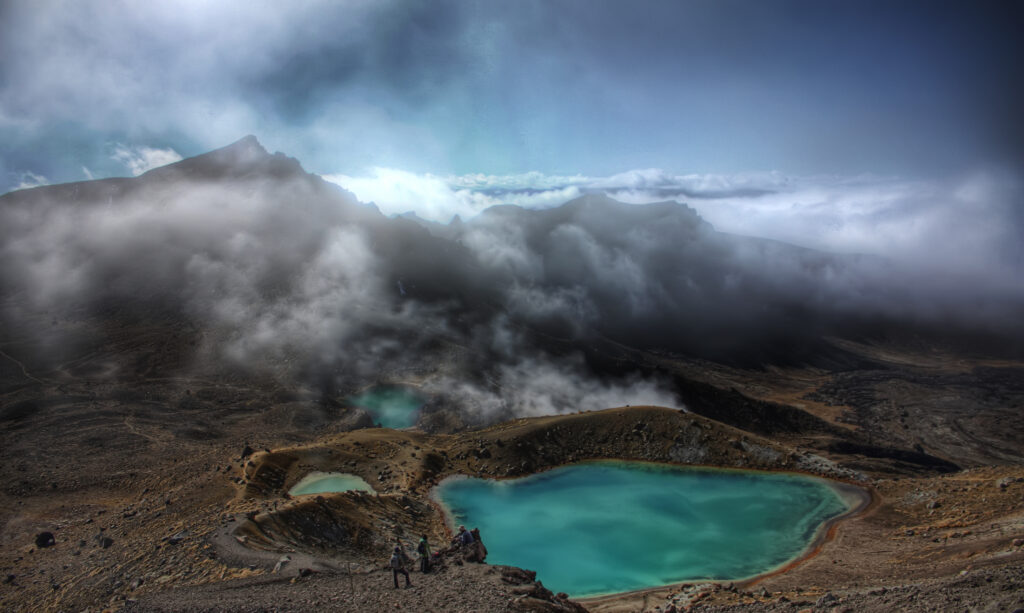 Where to spend the night?

If you have extra money for top-notch lodging, you can stay at the Chateau Tongariro Hotel, a four-star hotel located within the park. However, most people stay in Taupo, while others prefer to stay in hostels. If you prefer a bed and breakfast or hotel, check out Te Moenga Lodge or Whakaipo Lodge.

There is parking at each end of Alpine Crossing, as well as various transportation options. Most people go to the Mangatepopo parking lot and meet their driver on the other side of the Tongariro Alpine Crossing Ketetahi parking lot. 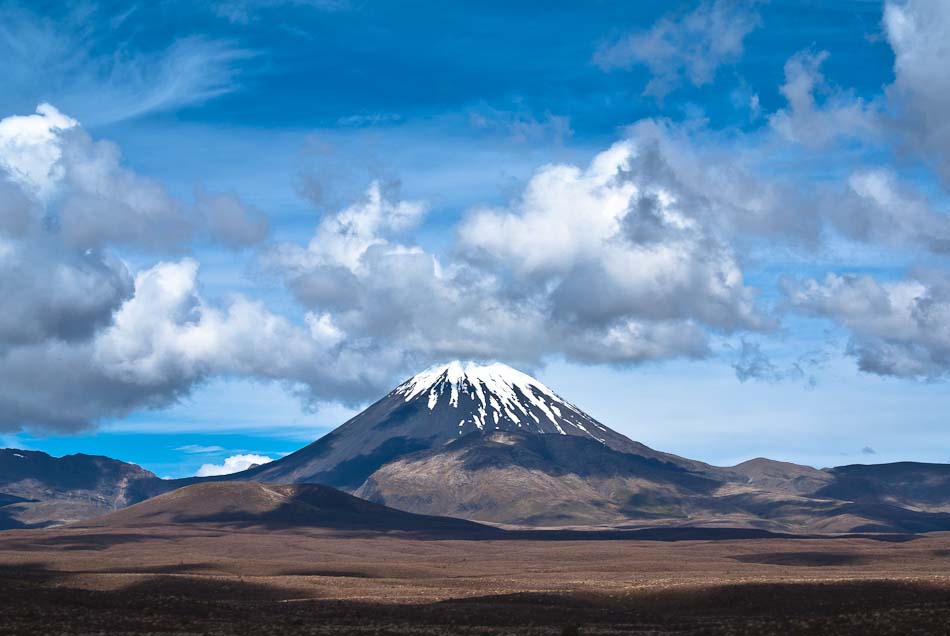 Others either bring or rent their own car, park on one side, and rent a bus to where they started. Although you can start from Ketetahi, most hikers take the Mangatepopo route, and since an average of 2,000 people make the trek each day, it may be in your best interest to follow that route.

If you start in Mangatepopo, the first thing you will see is the Soda Springs . This is your last chance to use the restroom for the rest of the hike, so take the opportunity if you need it. 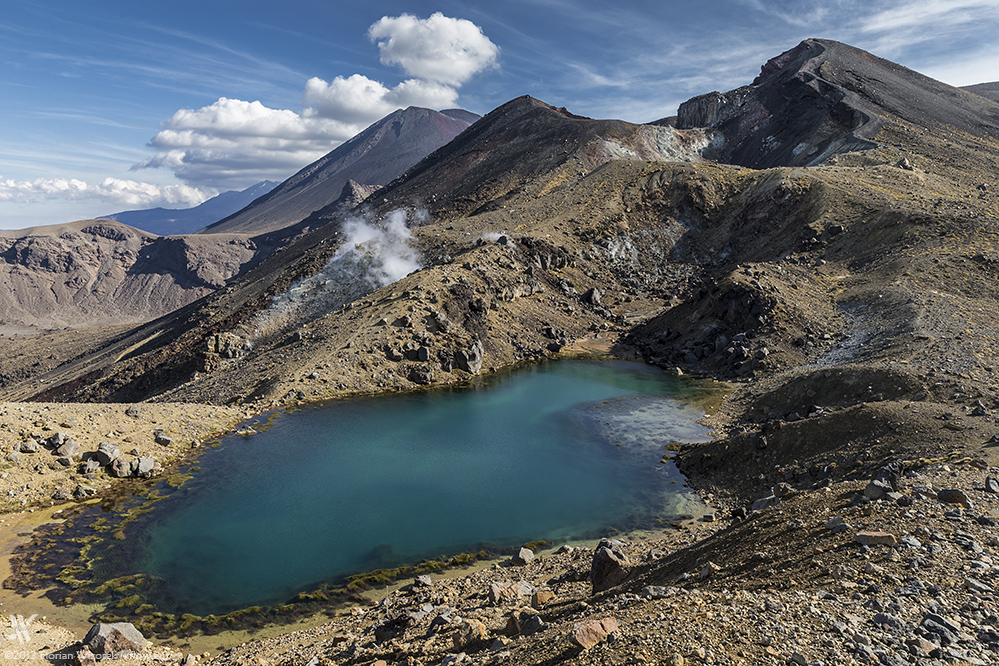 The walk to Soda Springs is peaceful and takes you through the rocky chasms that have become the backdrop to Mordor. Once you’re done contemplating the volcanic remains that surround you, it’s time to get to the Devil’s Ladder, a mile of stairs leading to the foot of Mount Ngauruho . Be careful, these “stairs” consist of streams of ancient lava and other volcanic deposits. 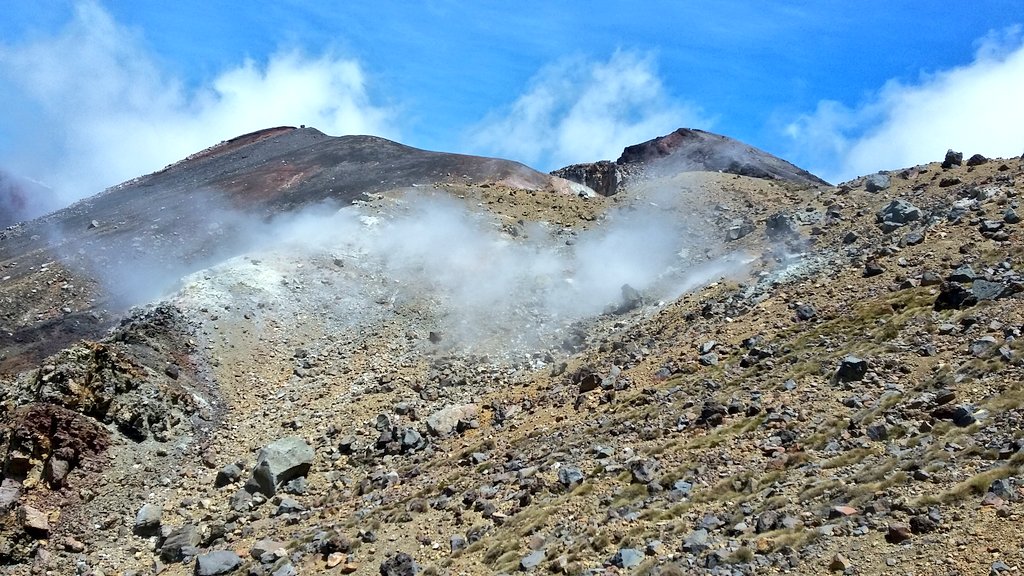 Once you reach the top of Devil’s Ladder, you have two options: sacrifice another three hours to climb to the top of Ngauruho, or continue on. By this point, Ngauruho might seem a little familiar to you – if you’re familiar with Lord of the Rings of course. 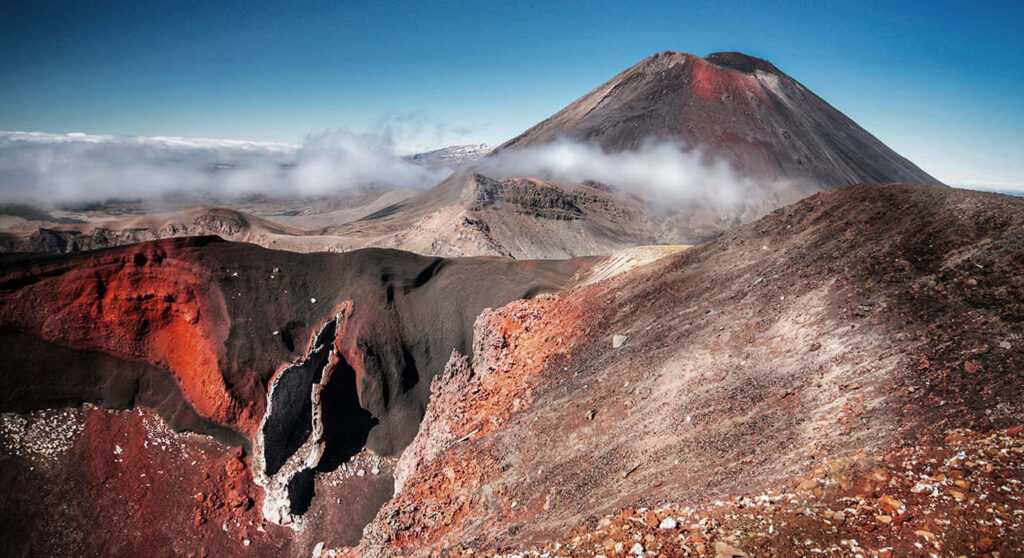 Ngauruho is now better known as Fatal Mountain, but before you decide whether to climb it, take a few things into consideration. If your bus is on schedule and will leave you if you don’t return on time (such as the one I stopped on), it may not be worth it.

Also, note that there are no trails on the volcano . It is all loose gravel, and halfway up the hill becomes so steep that you have to climb on all fours. You must also constantly pay attention to the falling rocks sent out by the people walking ahead of you. You should also remember to strain your ears at any rumbling, as Ngauruho is still an active volcano (but it hasn’t erupted since 1977, so you’ll probably be fine). 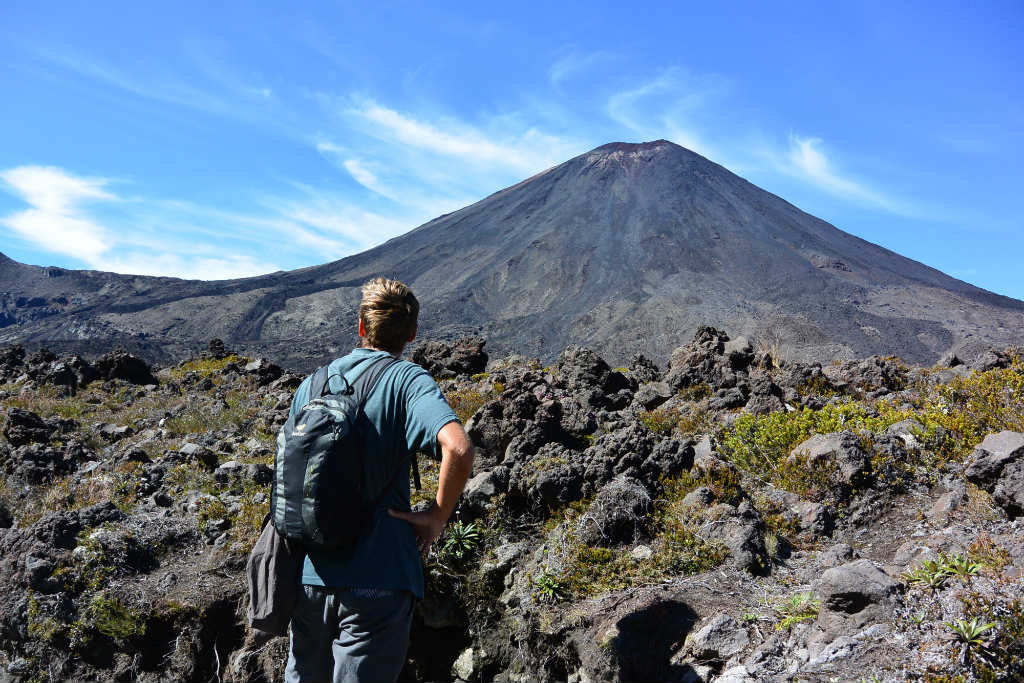 Before you begin your ascent to Red Crater, evaluate the time you have been given. You’ll wish you were still climbing the Devil’s Ladder before you even reach halfway up this ascending section. However, the views you’ll get from here are second to none compared to the rest of the hike. Once you reach the top, you will have a crystal-clear view of Mount Ngauruho and Mount Tongariro. 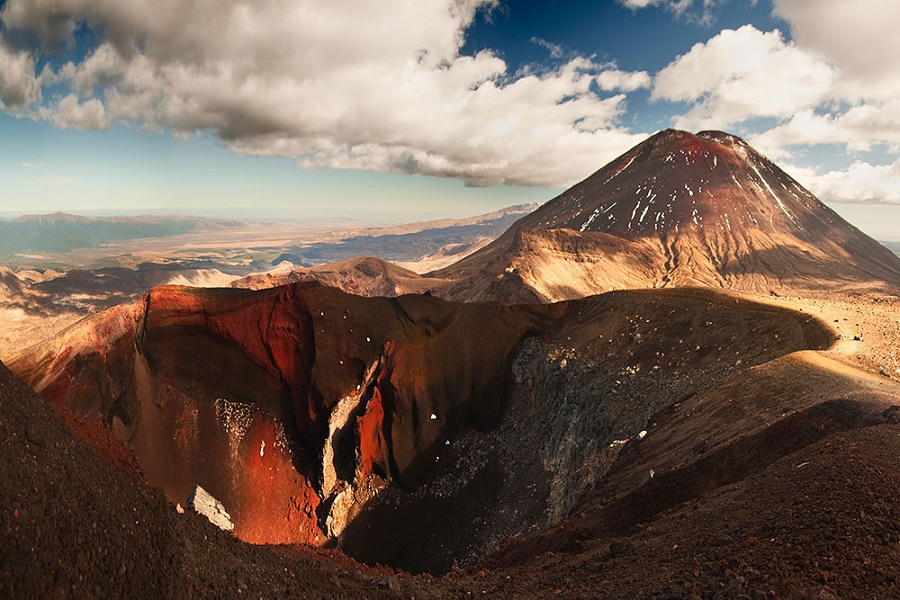 You’ll also be rewarded by seeing for the first time the world-famous Emerald Lakes, lakes made of sulfurous contents that glow with a natural neon-green light. The stench of a million rotten eggs may surround the area bordering the Emerald Lakes, but it’s easy to miss because of the obvious wonder of such a unique sight. You can also swim in these lakes, risking the smell of sulfur for the foreseeable future. 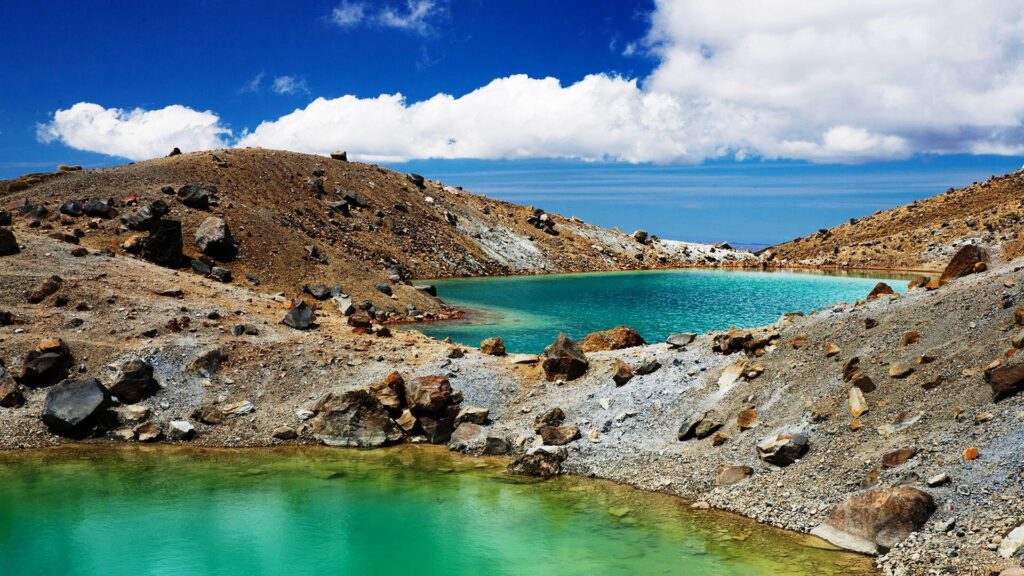 Unfortunately, once you get past the Emerald Lakes, you’ve passed most of the volcanic sites in the transition. The good news, however, is that it’s only from here. The bad news is that the road on the back side of Red Crater is just as steep as the climb up , and there is just as much loose gravel. It’s very slippery and a little dangerous. 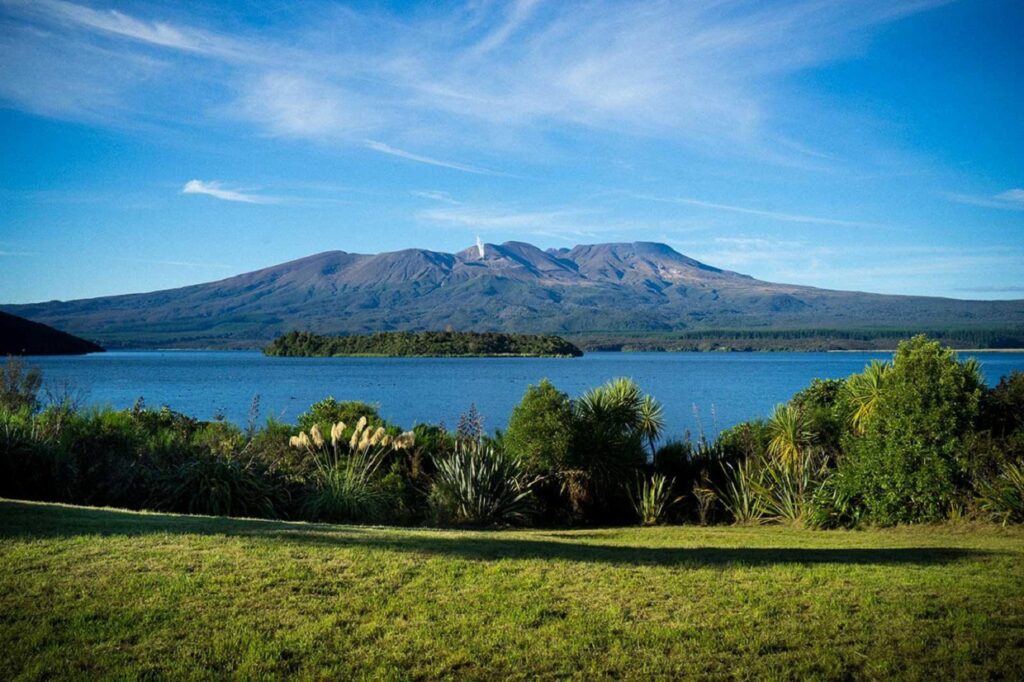 The rest of the way down will give you a great view of nearby Lake Taupo, and a glimpse of a few more sulfur areas. For the most part, the last half of the hike is on a winding trail down the mountain to the Quetetetahi parking lot. There’s another restroom on the way down, and in addition to the quarter-mile trail that they warn you about (run if you hear the only noise), you’ll mostly find stunning views of the surrounding North Island.