Small and cozy Reykjavik is the capital and one of the most beautiful cities in Iceland. Its main attraction are the small traditional houses with colorful roofs that shimmer in all colors, like Christmas decorations on a Christmas tree. One of the most important attractions of the city for more than 5 years is considered a concert hall and convention center “Harpa” (Harpa). Let us tell you more about it. 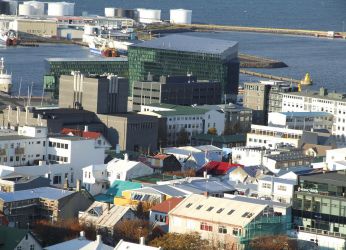 The building was designed by contemporary Danish artist Olafur Eliasson. Originally it was planned to place here a hotel for 400 people and a small shopping center that would include several stores and 2 restaurants. It was not possible to complete the plan due to the economic crisis of 2008-2009. However, the government of Iceland still decided to cover all the financial costs, and it is thanks to this that we can see this amazing work of art today.

The first concert in “Harp” in Reykjavik was held on May 4, 2011, and 9 days later, on May 13, there was an opening ceremony, which everyone could attend.

The main interest for many tourists is, of course, the architecture of this unusual building. From afar, the concert hall and convention center “Harpa” looks like a huge honeycomb, which in the bright sunlight play all the colors of the rainbow. Due to the high ceilings and glass walls, the area of the building visually increases and the building looks more spacious.

Of course, the most popular among tourists are evenings of ethnic music, because in order to fully know the country, you must also get acquainted with its culture. In addition to the concert halls, Harp has souvenir shops, a beauty salon, several brand clothing stores, and a luxurious restaurant, one of the best in Reykjavik. Its main “highlight” is the platform from which you can enjoy a mesmerizing view of the historic part of the city.

Finding the Harpa Concert and Convention Center in Reykjavik isn’t difficult, as this majestic building is located in the heart of the city. You can get here by bus, get off at the Harpa stop of the same name. It is worth noting that just 10 minutes walk from here is another famous sight of the capital of Iceland – the monument of Sun Voyager, which should certainly be visited during a hike.