The 15 Best Sights of Guatemala

Guatemala is a find-country that offers travel for all tastes. Everyone will love it here, whether you’re an adventurer, a connoisseur of historical heritage, or someone who just wants to lounge on the beach. 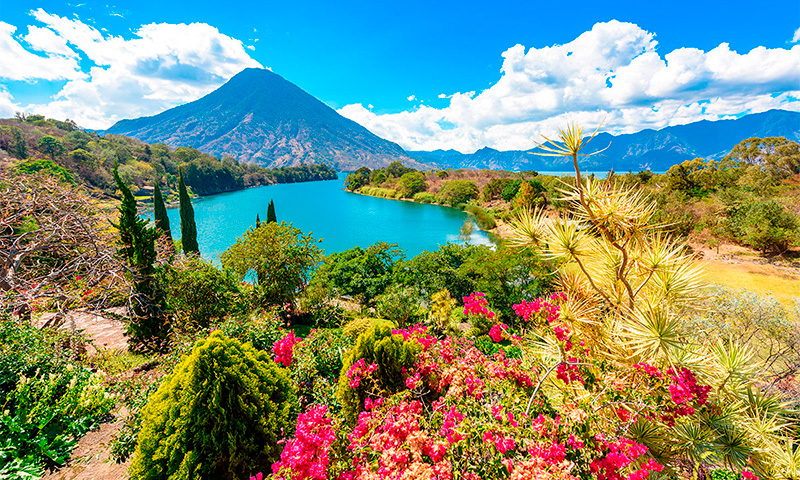 Who should go to Guatemala and why

The country has long been recognized as one of the most important cultural monuments in Central America. Everything here, from the colonial architecture and stone-paved streets of Antigua Guatemala to the Mayan ruins of Tikal, is extraordinary to the tourist.

Small towns in the highlands and on the shores of picturesque Lake Atitlan offer cultural and recreational activities for all tastes. Impassable jungle, rainforest, active volcanoes, lakes hidden deep in the mountains, thick forests, drowning in a haze of mist, and coral reefs will appeal to nature lovers.

Those who dare to go down to the coast, will get acquainted with the snow-white beaches and fishing villages of Guatemala. Here, away from civilization, you can seclude yourself in a hammock or bungalow to rest your mind and body.

In every corner of the country you can find stalls with locally produced goods. Especially appreciated by visitors textiles. However, sales outlets are open only on certain days of the week. 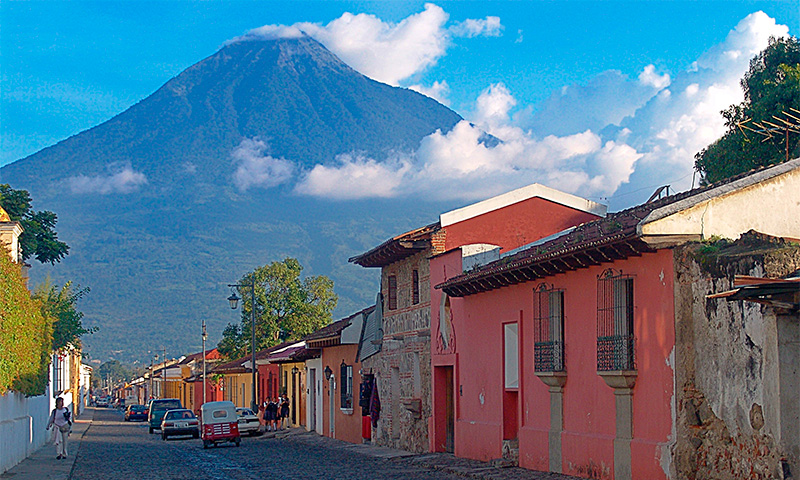 Antigua was once the capital city of Guatemala, until a major earthquake destroyed it in 1773. Locals were ordered to abandon their homes and leave. Since then the lively metropolitan city has become a provincial quiet place.

Antigua is a charming gem in Guatemala, known for its Spanish architecture, old-style palaces, cathedrals, universities and hermitages. The city is a popular tourist attraction especially during Holy Week. Pilgrims arrange entire parades and performances here, lining the streets with carpets of flowers. 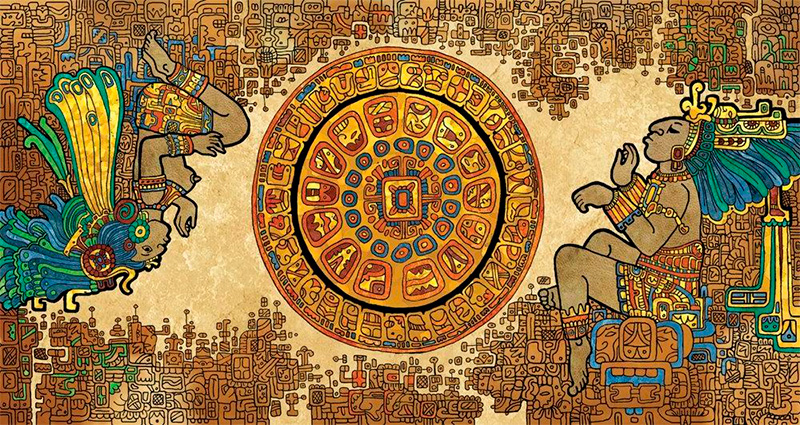 This is one of the world’s leading Mayan art museums, housing a valuable collection of artifacts from the pre-colonial past. On display are masks, ceramics, gems, tools and sculptures. 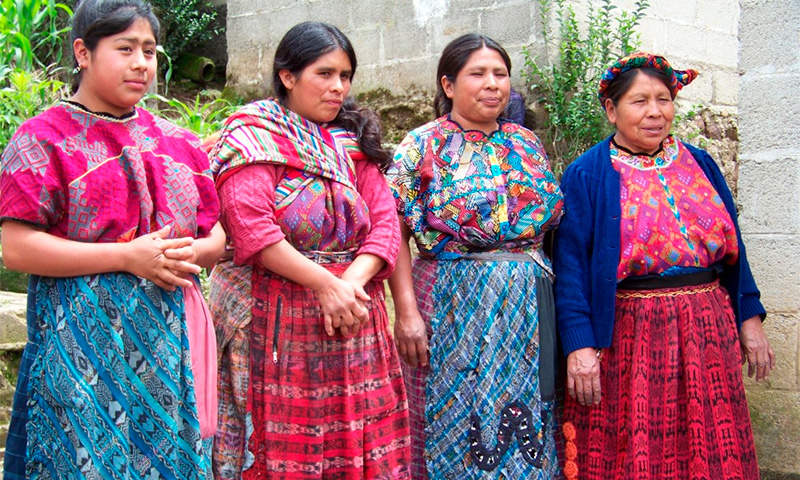 For an overview of traditional Guatemalan costumes, from ceremonial items to ordinary garments, you can visit the Ishel Mayan Costume Museum. It is located in the Francisco Marroquin University campus.

In the building is an extensive collection of textiles that were made in the late 19th century in 120 Guatemalan communities. A collection of paintings illustrating regional costumes completes the exhibit. The museum is named after the Mayan goddess of fertility and weaving. 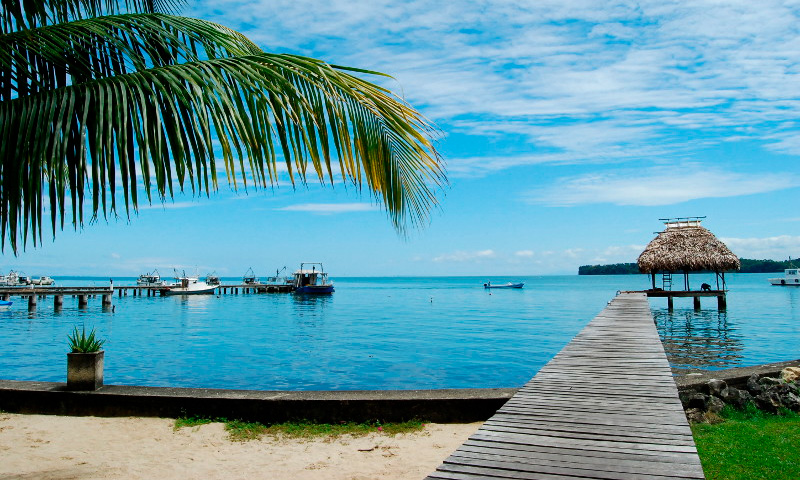 This small town with brightly painted wooden houses on the Caribbean coast. Enclosed on one side by jungle and coconut groves, on the other it stretches along the entire Guatemalan coast.

Here live mostly Garifuna, descendants of escaped slaves and the indigenous Mayan people. They created their own culture and language. In May, the locals hold chants and many pilgrims come to town to take part in colorful processions and masquerades. The celebrations during Easter week and on December 12 (Feast of the Virgin of Guadalupe) are also colorful events.

It is not as famous as the famous Tikal, but it is home to the third largest Mayan ruins in Guatemala. Yaxha was the ceremonial center of the pre-Columbian Maya kingdom. From the local vernacular, the name translates as “blue-green water,” which is understandable given that Yaxha overlooks a lake.

In the northern settlement of Guatemala, about 500 structures remain, including 13 altars and nine temple pyramids. It is a must to climb to the top of Temple 216 for views of the lakes and jungle. 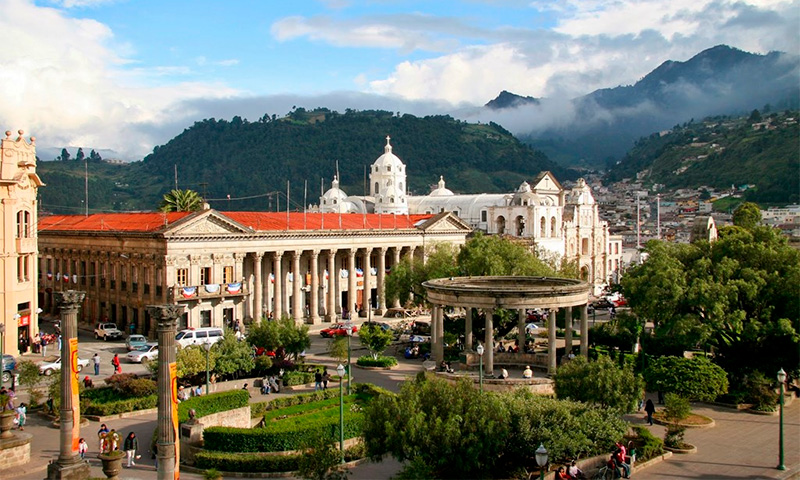 Central Park is the heart of the city of Quetzaltenango. Located between three massive volcanoes, it is a harmonious fusion of natural and cultural attractions. Locals call it Shela for short. Fuentes Georginas, the natural sulfur springs, were once discovered here.

READ
Which mountain should be considered the highest of the unconquered by man?

There are plenty of opportunities for tourists to explore the rarities of the local Mayan people in the park. There are also excursions from here to Laguna Chicabal, a sacred lake deep in the forest. There visitors are given a unique chance to see the Quetzal bird in the wild. 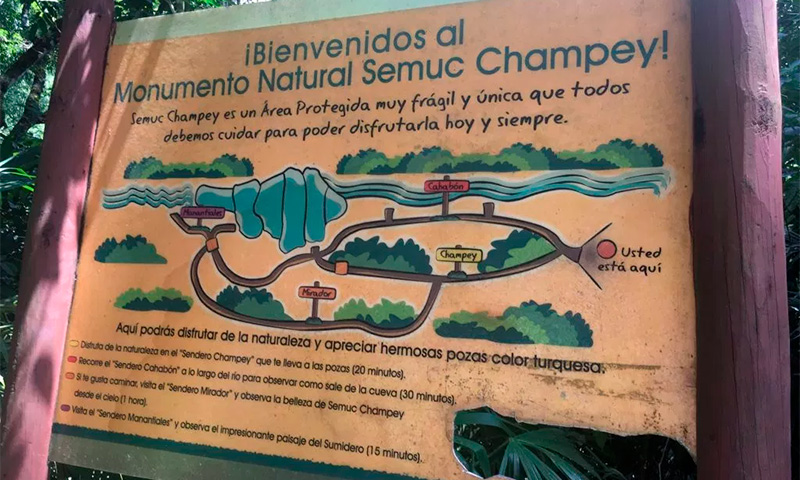 The limestone pools of Semuk Champi were once an isolated, tranquil area. Today, however, they are not a discovery for many tourists. Interestingly, it is the Semuc Champi that is considered “the most beautiful place in Guatemala.”

At the top of the ridge are small pools that are filled with the cool waters of the river flowing nearby. Although it’s not easy to get to this paradise, its beauty draws the eye. 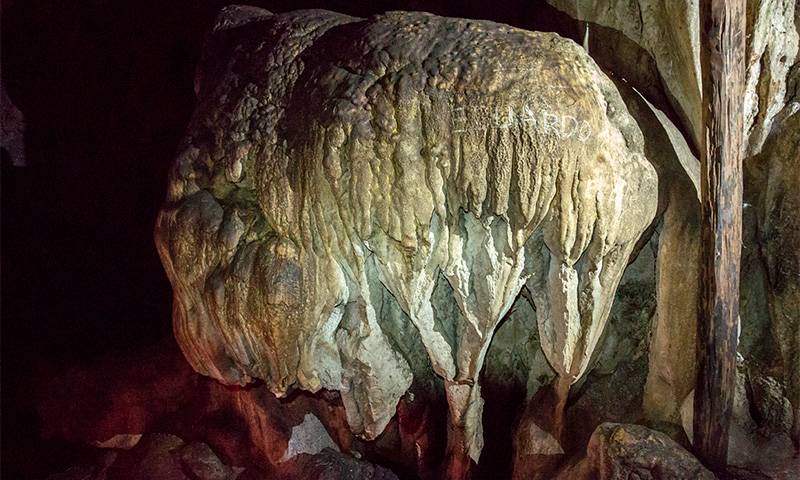 Located northeast of Koban, the caves are vast limestone structures with a surprisingly turquoise-colored underground river running beneath them. The locals consider them sacred. The best time to come here is in the evening, so you can watch hundreds of bats going out to hunt.

Tourists can admire the beautiful lagoons and unique rock formations. You can also take a trip through a cave, some of the rapids of the river inside of which are extremely turbulent. 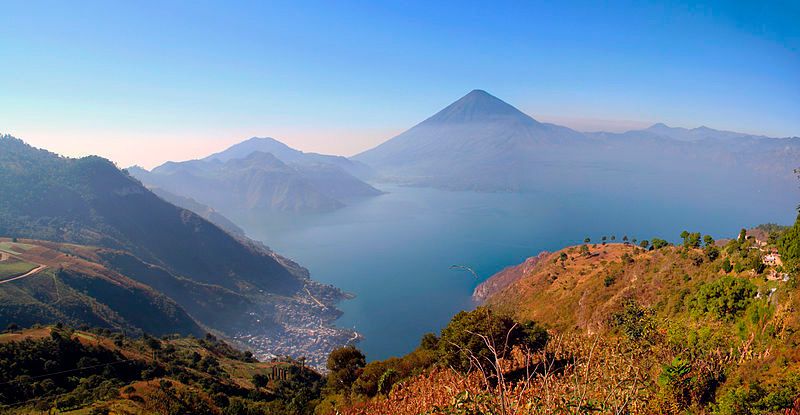 Lake Atitlan was described in his works as far back as Aldous Huxley. The writer acknowledged that “it is one of the most beautiful bodies of water in the world. It is located in the Guatemalan highlands.

You can get to the lake through the town of Panajachel, which is also a fusion of the unique culture of the Maya and other ancient peoples. It is a beautiful area with many tourist attractions, opportunities for exploration, scuba diving and learning Spanish. 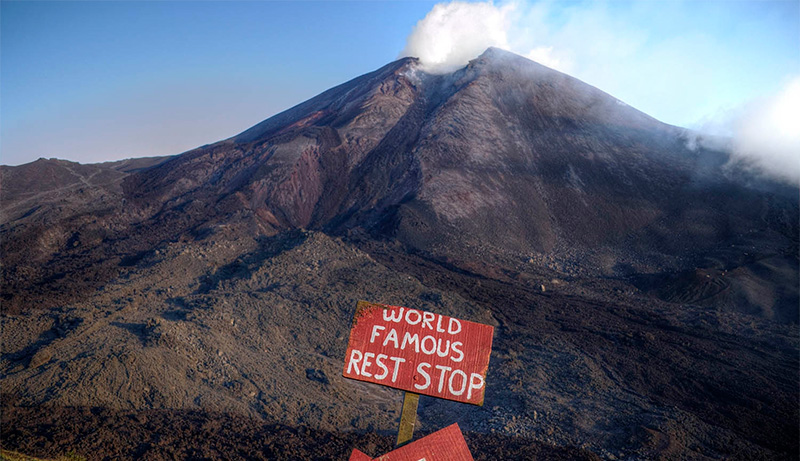 An active volcano is located near the capital of Guatemala. Pacaya last spewed lava and ash less than a decade ago, in May 2010. There are hiking trails at the foot of the volcano, and walking is not prohibited, but the trails are not very popular.

READ
What to see in Tunisia: attractions and travel information

You need to have strong nerves to walk near an active volcano. If the desire to climb the volcano Pacaya does overpower you, you are waiting for the magnificent views that open from its slopes. But you should set aside at least a day for this walk. 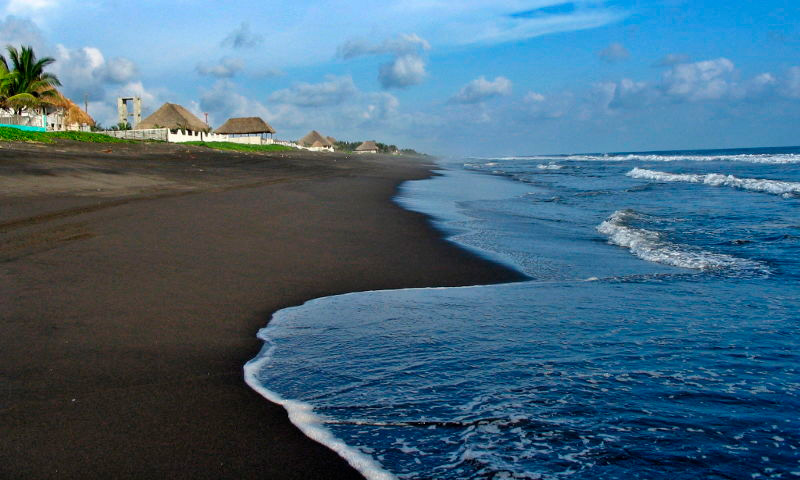 Monterrico is a lost picturesque beach, strewn with volcanic sand. It is rarely visited by people, nature is preserved in its pristine state, and the Pacific Ocean is unusually clear.

You will not find a better place for those who want to escape from reality. When swimming you should be careful – the water in this place is choppy, the current can twist even an experienced swimmer. Therefore, it is forbidden to dive to depth here. A rare exception is made for professionals.

Those who are not strangers to environmental protection should take part in the rescue of sea turtles, visiting one of the nearby seasonal reserves. 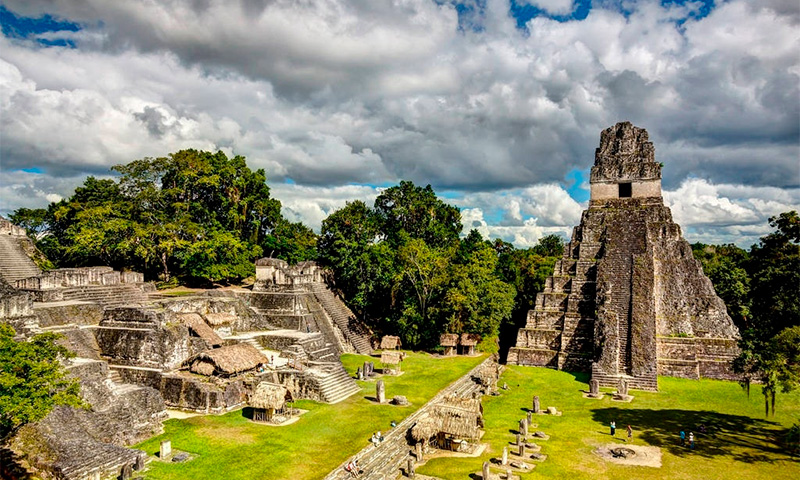 Located in the lowland rainforest of northern Guatemala, Tikal is one of the main tourist attractions of this country. It is beautiful and mysterious. The name Tikal translates as “Place of Voices” (sometimes “Place of Tongues”).

Today all that remains of this ancient metropolis is a large number of ruins of Mayan structures. The city itself is surrounded by a large wildlife sanctuary full of monkeys, parrots, deer, and other exotic birds and animals. 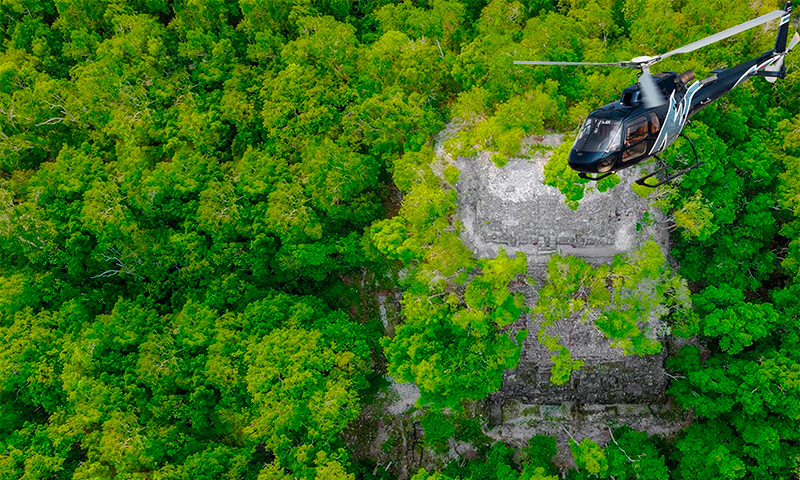 El Mirador was a major Mayan city that flourished from about the 6th century B.C. and was abandoned at the end of the 9th century A.D. The ruins of El Mirador were discovered in 1926, but they received little attention because of their remoteness (they are deep in the jungle of northern Guatemala). Today there is little left of the former city – it has been swallowed up by the tropical jungle.

A visit to El Mirador is an exciting adventure. The village of Carmelita is the closest point to the ruins, which can be reached by car. From there you will have to walk for about five days. Do not forget that on the way you can meet different animals, so it is worth preparing for such a route in advance and take a guide. 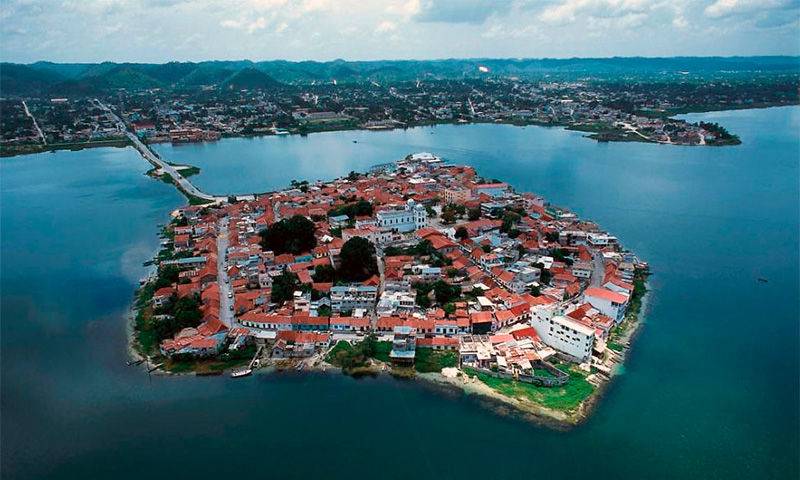 Flores is often used to name not only the island village, but also its mainland sister, Santa Elena. The area is picturesque, and tourists can easily navigate – it is impossible to get lost here. There is also a place to stay – the village is dotted with charming hotels.

There is no other city like it in Guatemala. Authentic, quiet, this small secluded island deserves attention and time to stroll through it, enjoying the views of the local lake, sunrise or sunset. 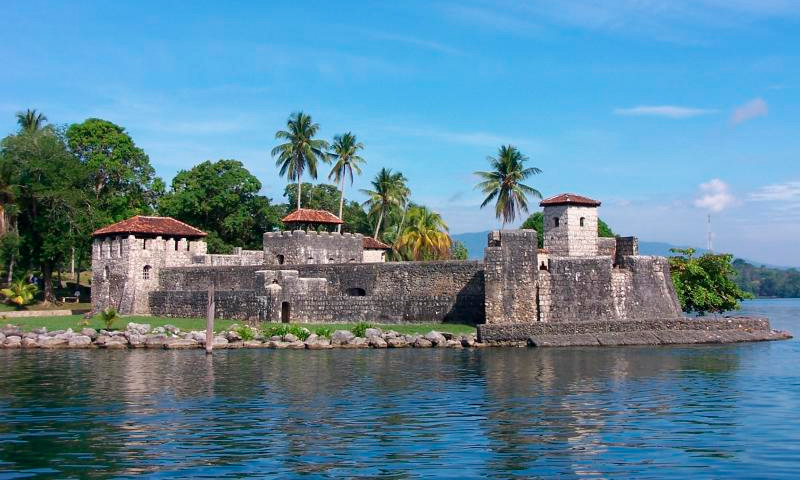 The Rio Dulce or Sweet River is popular with boaters. It flows from Lake Isabal, which is located next to Castillo de San Felipe de Lara, an old Spanish colonial fort built to keep Caribbean pirates off the river.

Today, Rio Dulce boasts one of the largest bridges in Central America. On one side of it is the town of Frontera, famous for its vegetable market – buyers come here by canoe. On the way to the Caribbean Sea, the riverbed leads through an impressive gorge with high escarpments. 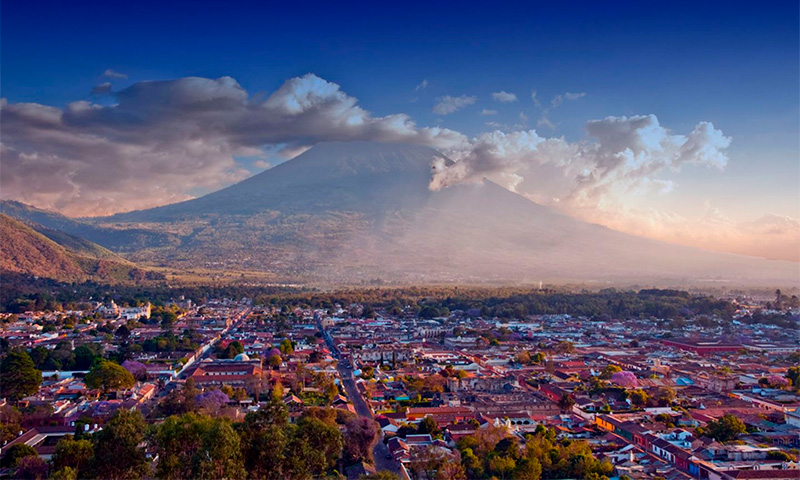 Guatemala City is the largest city not only in the country, but in all of Central America. Guatemala City has a population of three million people. The place is as crowded and built-up as any metropolis, but extremely unique.

The fact is that Guatemala has a wonderful climate and beautiful scenery. The locals simply call this area “Gwatem. It is located at an altitude of 1500 meters above sea level.