Geirangerfjord is one of the most famous fjords in Norway. It is no coincidence that there are always crowds of tourists – mostly in summer. However, people are not an obstacle to the beauty of the fjord – it’s almost steep cliffs and rumble of waterfalls, and still – snow-white cruise ships, furrowing the blue-black waters of the fjord.

The beginning of the fjord (16 km) is not by the sea, it’s one of the branches of the big system of Norwegian fjords. If you arrive here by car ferry, on the way from Hellesult to Geiranger you can admire the beauty of unique waterfalls: “Veil of the Bride”, “Seven Sisters” and “Bridegroom”. More than a hundred cruise ships dock at Geiranger harbor every year, and even the Hurtigrute ferries ply the picturesque fjord in the summer.

What to see around Geiranger Fjord

The winding and narrow road

The R 63 winding and narrow road leads to Geiranger – it branches off from the E 15 west of Grotli and runs along the shore of Lake Breidalsvatnet, with the Djupvasshytta Inn on the western shore.

From the hotel Djupvasshytta you can turn right and take the Nibbevei toll road (up to 12.5%) to Dalsnibba Plateau (1495 metres above sea level). The road is open from June to September. From there begins a vertiginous serpentine ascent (5 km) to the top of the same name. From the top there is a magnificent view of the mountains and Geiranger-fjord.

After passing the Djupvasshytta Hotel, we come to an amazingly beautiful mountain road. It winds its way up to Geiranger. The altitude difference is 1000 m and the road is 17 km long. In a short time you will experience not only a height difference, but also a change of climatic zones: the harshness of the highlands is suddenly replaced by a pleasant gentleness, where there are no winds from the valley. After the 0vre Blafjellbro bridge you have a stunning view of the serpentine Eagle Road to Eidsdal.

READ
Northern Ireland is a country of the United Kingdom, consisting of 6 counties

Behind Orjeseter from the Flydalsjuvet observation deck (300 m; parking lot) you can once again admire the magnificent views. Not far from the parking lot is the beginning of the footpath to Storsetterfoss waterfall (about 30 m high) . Further on the main road after Hole is the Utsikten Bellevue hotel.

Finally ahead is Geiranger, a small port with many tourists at the eastern end of Geirangerfjord. A fjord museum opened here in 2002: an exhibit introduces visitors to the daily life and traditions of the Norwegians who live along the shores of the fjord.

From Geirangsr, take the same R 63 along the northern shore of Geirangerfjord to Eagle Road, which connects Geirangerfjord to Noordalsfjord. The Eagle Road is 11 giant loops of mountain serpentine. Every part of the road offers wonderful views of the fjord and waterfalls. The highest point is Korsmyra (elevation 624 m) . From Eidsdal to Noordalsfjord you take the Eidsdal-Linge ferry. From there you travel eastwards to Andalsnes, and then westwards to Alesund.

One of the highlights of a trip to Norway is getting to know the Geirangerfjord. From June through August, tours of the fjord begin from the old ferry pier near the Geiranger Tourist Office (walk time 90 minutes) . Prepare in advance for a long queue (www.geriangerfjord.no Tel.: 70 26 30 06) .

READ
Paradise Hawaii, USA: The best islands to vacation on 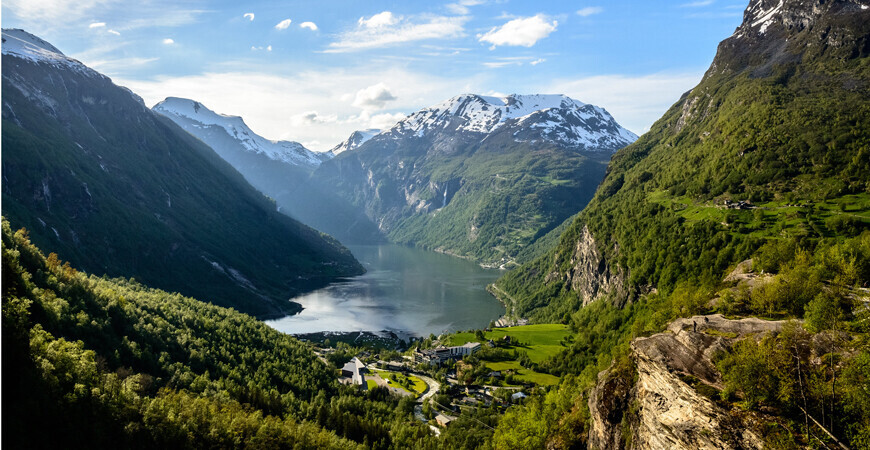 Geirangerfjord is one of the top five most visited natural sites in Norway according to Tripadvisor. It is surrounded by the most craggy mountains not only South Møre region, but also the western part of Europe. Its name in Old Norse means “arrowhead”, and indeed: the channel has a triangular shape and seems to plunge into the steep cliffs.

Geirangerfjord is situated 100 km from the port city of Olesund and 280 km from the capital of Norway. It is a 15 km long branch which branches off from another sea bay, the Sturfjord. The nature of this place is truly pristine: the emerald shade of water, snow-capped mountain peaks and magnificent waterfalls.

The unique topography was formed here between 15000 and 10000 B.C. The movements of the glaciers carved a winding and deep gorge in the mountains, which eventually filled with water. The height of individual ridges is 2000 meters above sea level. The depth of the lake is no less impressive: about 700 m.

The fjord does not have suitable shores for housing: the nearest tourist and camping areas are mostly on the surrounding plains, but on its eastern shore there is a single village of the same name. During the holiday season, its population (300 natives) increases sevenfold. Tourists come here for the opportunities of ecological tourism and recreation surrounded by unspoiled nature, visit the many observation sites.

Abandoned farmlands are scattered along the coastline. Dangerous paths, ladders, and bridges anchored to the cliffs with iron rings and bolts lead to them. The most famous farms in Geirangerfjord are Skagefla, Blomberg and Knivesfla. Here you can still feel the atmosphere of the Norwegian Middle Ages.

One of the brightest decorations of the fjord are six waterfalls of different characters.

It is conventionally considered part of the famous Troll Road. A powerful stream of water falls from a cliff 240 m high. The best time to see Stigfossen is on a cloudless morning, when the sun has not yet risen high above the ground and emphasizes the beauty of the Norwegian waterfall.

This waterfall is not as imposing and smaller in size, but it looks just as spectacular. It is located just east of Stigfossen. The best view of the natural feature is at the section where the Troll Road goes down.

It is part of a popular hiking trail. The path to the waterfall is difficult, involving a car ride on a narrow gravel road and climbing on dangerous trails. A small grassy plateau rises above Storseterfossen, offering a captivating panorama of the fjord.

“The Seven Sisters, The Bridegroom and The Veil of the Bride

These three waterfalls, located 6 km west of Geiranger, are united by an old Norse legend. It tells the story of a young and brave Viking who decided to marry seven sisters, who won him over with their beauty. For this purpose the man bought a magnificent veil, but he could not decide which of the beauties she would get. The veil slipped out of the Viking’s hands and turned into a waterfall. The grieving groom drowned his grief in a bottle, and the sisters to this day mourn the missed opportunity to marry.

All the waterfalls are impressive in their monumentality. The height of the mountains, from which the crushing streams of water come down, exceeds 400 m, and the width of the streams themselves vary from 200 to 220 m.

There are three viewpoints in the vicinity of Geirangerfjord.

This is the only observation deck located away from the village of Geiranger, at the top of the mountain. It was opened in August 2016. The original design of the floor and the glass railings provide guests with an unobstructed view. From a height of 1,500 m you can enjoy the most picturesque views of the fjord, the village, the mountains and the glaciers of Blobrein.

Adjacent to the observation deck is a store where you can buy gloves, souvenirs and locally produced food. It is open seven days a week: from June 15 to August 15, from 09:00 to 17:30, and closes an hour earlier at other times.

Tourists and locals visit Dalsnibba for a fee, the admission of personal transport (car, motorcycle, motorhome) is also paid.

This lookout is adjacent to the last loop of the Eagle’s Road serpentine. It is set 600 meters above sea level and overlooks one of the curves of the Norwegian fjord. For safety purposes, Ornesvingen is surrounded by a glass fence just below human height.

The site is located near the highway leading to the village of Grotli. It is divided into two levels, below which there is a steep cliff – a photographer’s paradise. Just above Flüdalsjövet is a smaller observation deck. In its center there is a stone throne of the Norwegian Queen Sonja, who was present at the opening of the site in 2003.

Travelers will not be able to get to Ornesninjen and Flüdalsjövet on their own. The easiest option is to use transportation – a “panorama bus” or to rent an electric car.

Geirangerfjord is located in a temperate maritime climate zone. It is characterized by average annual temperatures above freezing, high humidity and heavy rainfall throughout the year. Winter is abnormally warm for temperate latitudes: even in February, the mercury gauge can show a positive temperature. Summers are pleasantly cool, uncharacteristic of continental Norway.

The winter averages are as follows: -2 °C during the day and -6 °C at night. In summer, the temperature rises to +20 ° C and +12 ° C, respectively. The rainy season conditionally lasts from May to November. The amount of precipitation ranges from 75 to 105 mm. In the other months, this figure does not exceed 60 mm.

Water in Geirangerfjord warms up poorly because of the considerable depth of the bay. On average it reaches +15-17 ° C.

The closest hotels to the fjord are in the village of Geiranger and are small guest houses. They can be equipped with a kitchen with modern appliances, a bathroom, one or two bedrooms (depending on the type of cottage), and a TV. Some allow you not only to admire the nature, but also to make a barbecue. The cost of accommodation starts from 100 euros per night per room.

READ
What can surprise tourists in Sighisoara, Romania?

Near Geiranger there is also a quiet camping area for 45 trailers. The camping area is equipped with showers, toilets, washing machines, clothes dryers, Wi-Fi, etc. There is a charge for their use.

Pets are allowed in the camping-zone. It is obligatory to observe two conditions: silence and cleanliness. Otherwise you will be asked to vacate the trailer.

There is a small private boat landing next to the camping area. Here tourists rent motorboats for fishing and water trips.

How to get to Geirangerfjord

You can reach the natural site in four ways:

In addition, travelers can visit the natural site as part of the cruises offered by many local travel agencies.