Gardens and Parks in England: Dartmoor and Brixham

This hobby paved the way for the first “plant hunters” . Over the next 200 years, thousands of exotic species of flora sprang up in English gardens and parks. Stourhead in Wiltshire is one of the country’s finest parks. This strikingly beautiful park is formed around a man-made lake created by a dam of the River Stour. The park was laid out in 1741 by the landscape designer Henry Hore. He’d just returned from Europe and was full of ideas for taming the wilderness and creating a garden of paradise with gazebos and statues, grottos and bridges.

Do you want to see London now? Then go to: London online.

However, this emphasis on perfection did not prevent Cornish gardens and parks of the eighteenth and nineteenth centuries from acting in several roles. They served both as a “testing ground” for the cultivation of curiosities imported from China, India and the Himalayas and as a place of social entertainment. A perfect example is the Lost Garden of Heligan, which lies south of St. Austell. In the 1990s, Tim Smith, a landscape architect, revived it from oblivion, making it a veritable open-air museum. Dartmoor Dartmoor in Devon is the most extensive area of unspoilt nature in England . 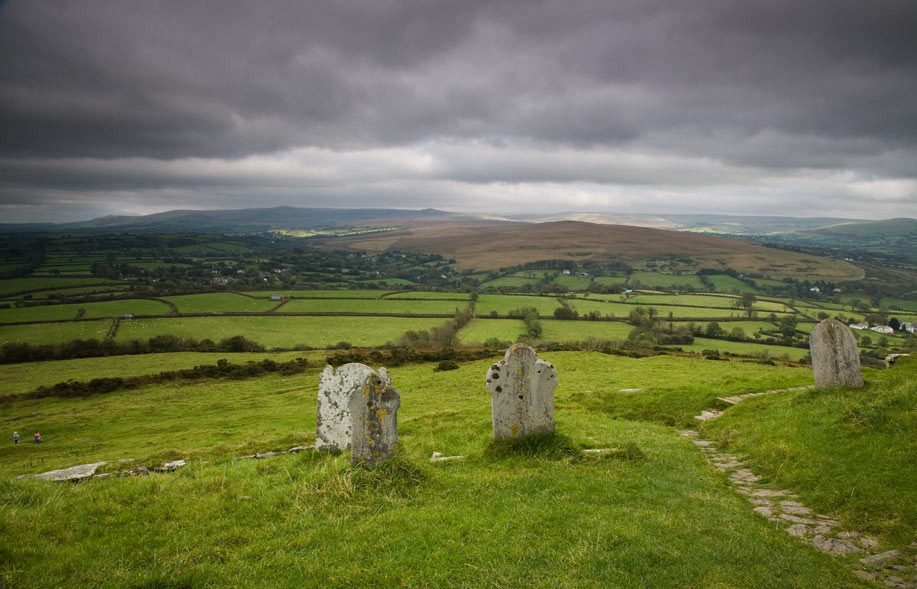 Want to see London right now? Then take a look at London online.

An area of 913 km2 is occupied by wilderness plain. Bogs, peat bogs covered with heather, countless granite boulders of all shapes and sizes – this is the landscape of Dartmoor. The central highlands are deserted. The heather-covered moorland is treacherous, with swathes of marshy ground, mires, and swamps, over which the air seems to thicken to create an impenetrable blanket of mist. These natural features were tailor-made for Conan Doyle’s famous tale of the Hound of the Baskervilles, set at Dartmoor.

On the edges of this desolate plain are the pretty green hills dotted with river valleys and characteristic pretty villages. Princetown is in the heart of the desert peat bogs. This bleak setting, with its granite buildings, is home to a penitentiary for the most dangerous criminals. It was once meant for prisoners of war of the Napoleonic troops. But Princetown is where the route to Dartmoor’s most scenic parts begins. 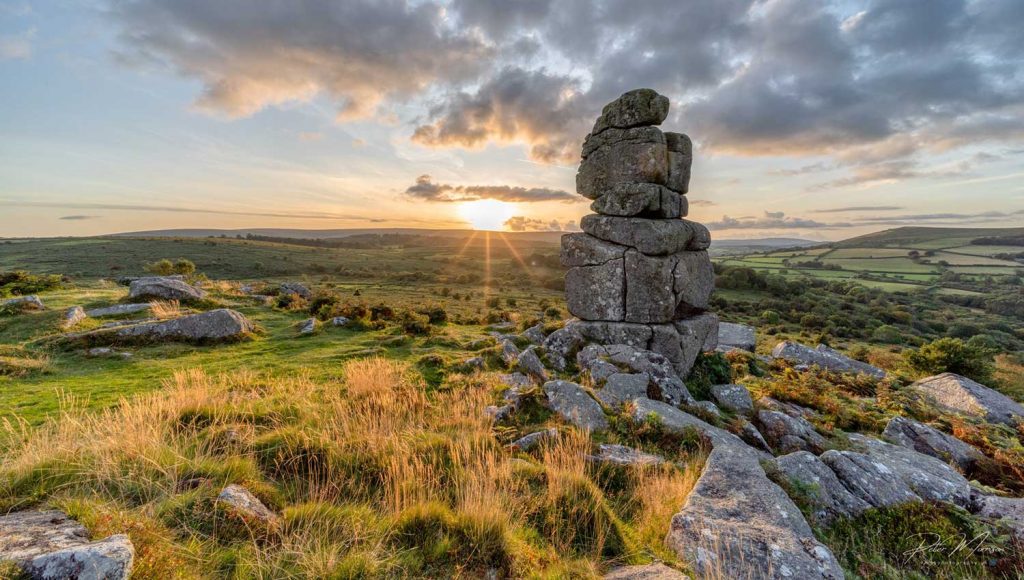 Wind through mossy moorland and river-valley woodland to the delightful villages of Widcome-in-the-Moor and Buckland. Widecom is famous for its ancient church. The heroes of the folk ballad Uncle Tom Cobbley and his musician friends were on their way to Widcom for the fair, which is still held annually in early September. At the confluence of the East and West Dart Rivers, between the two villages, stretches the picturesque Dartmite countryside. Those who like solitude should turn north. Oakhampton is surrounded by wonderful walking trails. Access is limited because there’s a military training camp nearby.

But the austere majesty of the heather plains is best experienced in the wilderness, especially if you climb the high hills of Yes Tor (618m) and High Willoway’s (621m). Rare wetland plants and wild orchids, as well as many bird species, can be found here among the raging grasses. Brixham In another part of the county, Brixham is the fishing center. 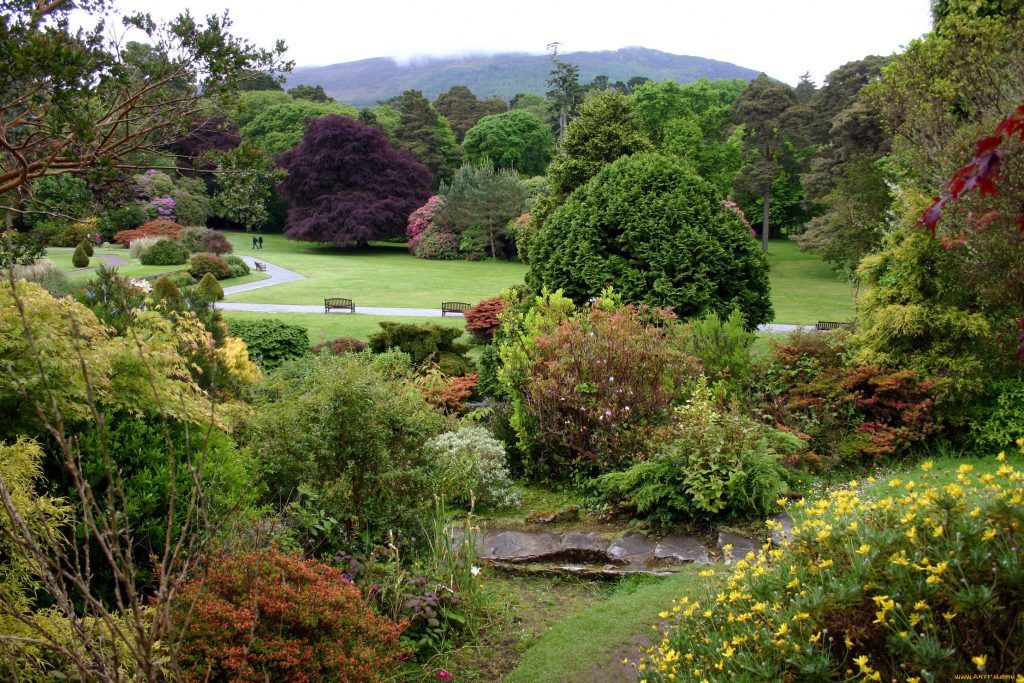 This port dates back to before William 111 landed here in 1688 with the intention of ascending to the English throne. Brixham is a charming place, with dozens of fishing boats and ships in its harbour – now mostly diesel-powered, but also sailing ships, some built before the early 1940s. Most are three-masted trawlers with traditional Brixham scarlet sails. Brixham fishermen have always been desperate sailors, sailing to Newfoundland as far back as the 16th century. Sun, sea, walking in the hills and fine fish food are the main attractions. 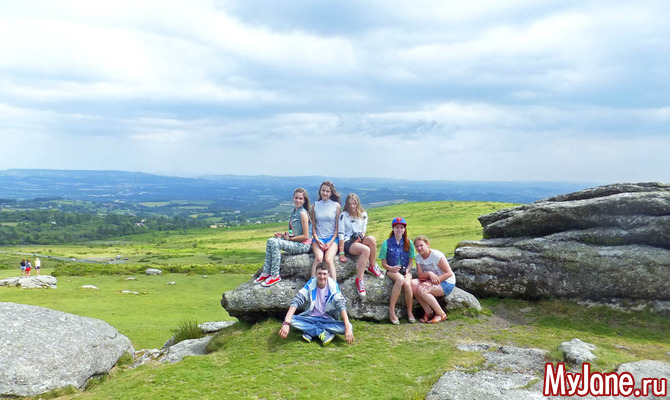 Every time we gather for a tour or trip, we meet under this tree. 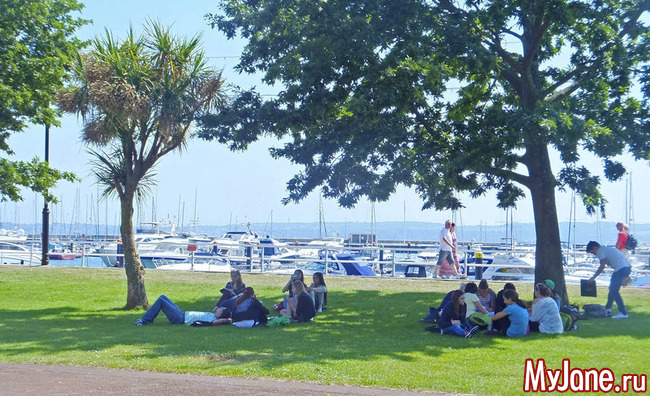 It’s very convenient, right under the Ferris wheel. While folks are gathering, we’re on the shore of the bay relaxing.

A trip to Dartmoor Heath, or Darthmour Heath in English, is announced. 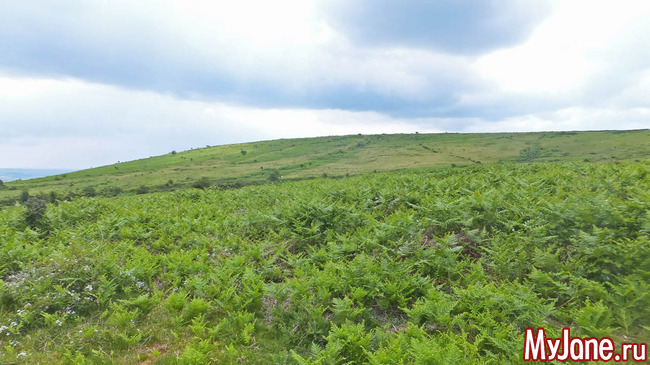 It’s an area 130 kilometers from Torquay, which is a climatic national park. 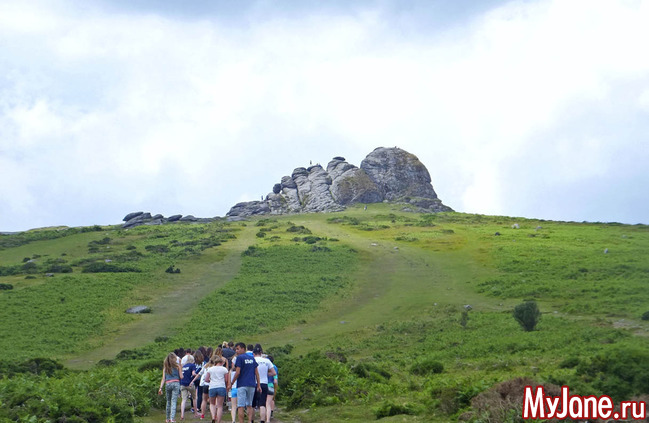 30% of the area is taken up by unforested bogs at an altitude of over 365m above sea level, covered with a thick peat layer. 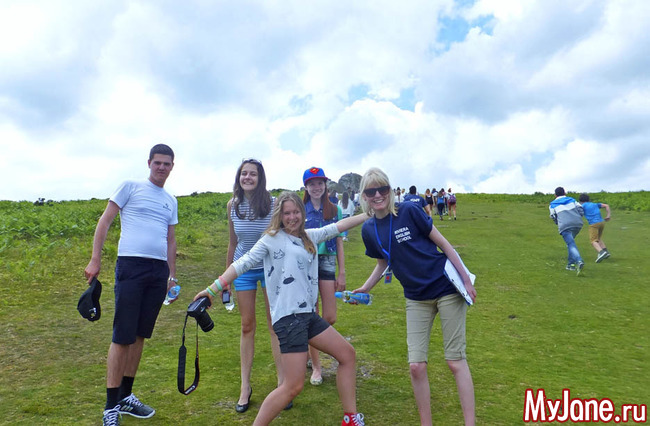 On these heights there are scattered flat granite blocks from 10 to 600 meters high. 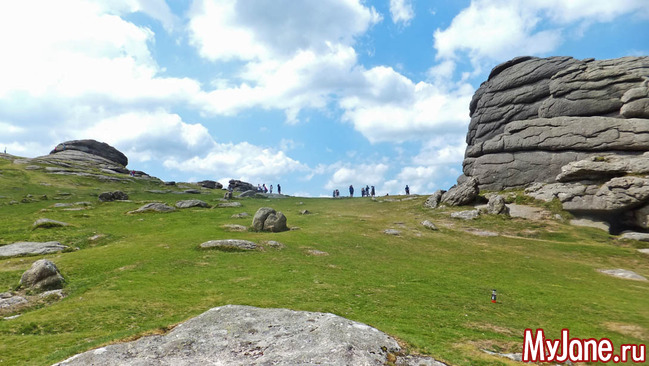 From the tops of these hills one can enjoy extraordinary views. 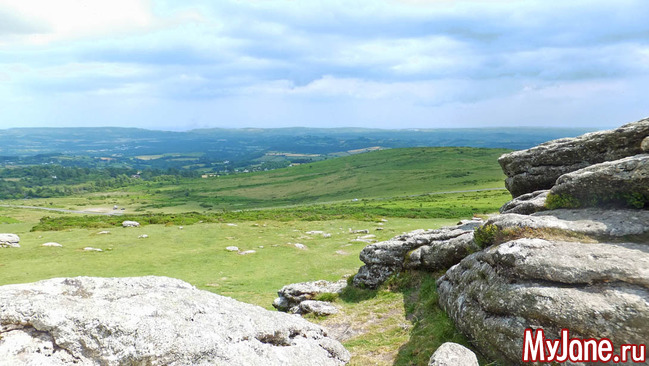 In the Middle Ages the whole area of Dartmoor was declared a royal hunting ground. Dartmoor is home to a group of semi-wild Dartmoor Ponies, Britain’s oldest pony race, which still graze on the moors.

On the hilltops, archaeologists have found sanctuaries of the long-gone ancient Devon Celtic people and fortifications dating back to the Iron Age. 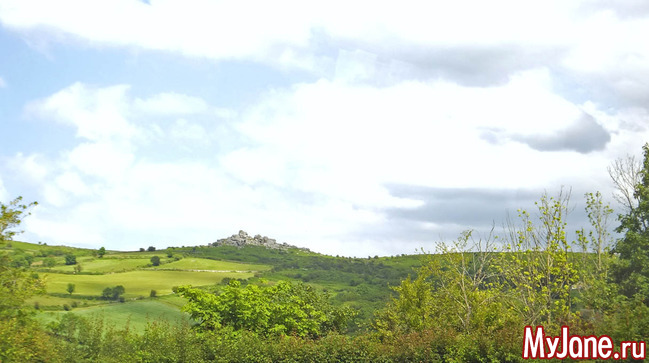 The peculiarly bleak beauty of the heathlands and marshes was often used by English writers and poets to create a romantic/dramatic atmosphere. The events of N. Carrington’s poem Dartmoor and the novels of Eden Philpotts take place here. But the most detailed description of Dartmoor’s beauty is in Richard Blackmore’s novel Lorna Doon. In it, even individual plot twists rely on the peculiarities of the local landscape. Most popular, however, is Arthur Conan Doyle’s description of the moors in his acclaimed tale The Hound of the Baskervilles . 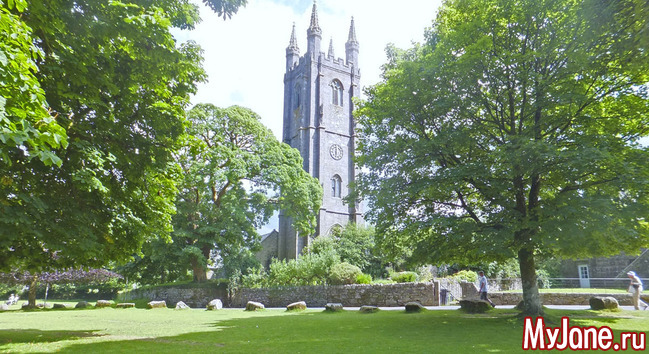 The fugitive convict and Sherlock Holmes himself hid in the caves of the ancient Celts on such hills. In the heart of the swamps on a stone island the villain Stapleton kept his dog. And it was on the path among the marshes that Sir Henry Baskerville was walking when the dog attacked him.

This town of Bovey Tracy supposedly housed most of the characters in the detective story, only in reality Baskerville Hall is not nearby. 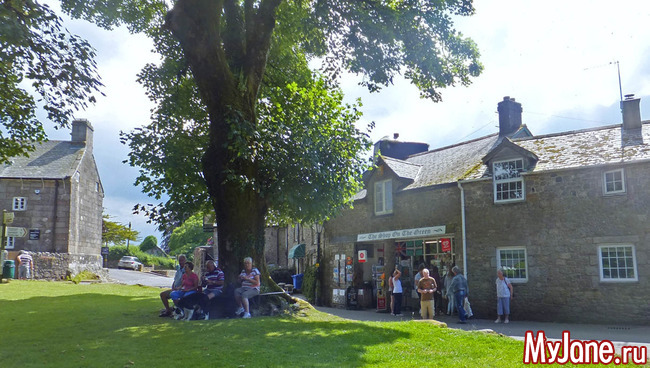 But in Bovey Tracy is the Dartmoor National Park Authority.

One day we took a bus to the remote Babbakombi neighborhood. This area used to be a resort town and was famous for its hotels. Now it is part of the city of Torquay.

The hotels are lined up along this bluff. 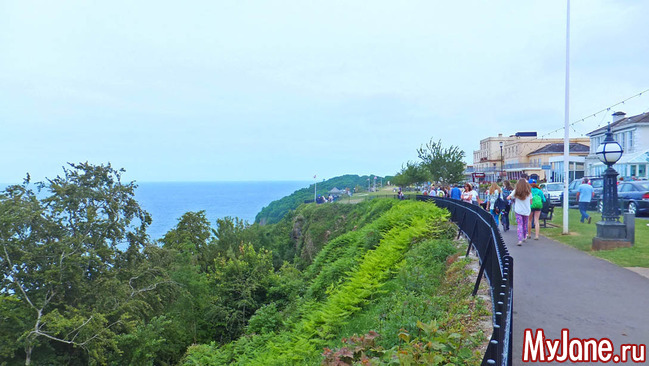 The famous Babbacombe Beach is below the cliff. 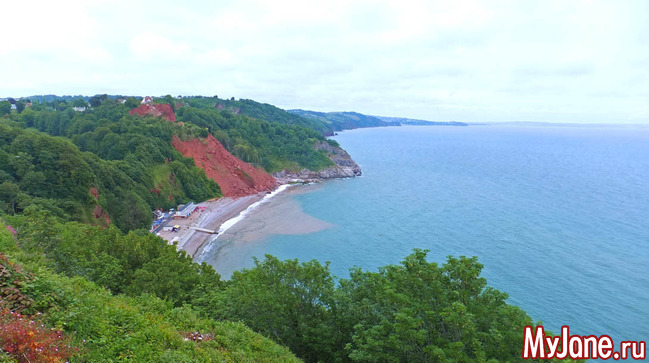 Here, on the bluff, Italian and Spanish kids were actively playing soccer. And my lazy kids and the two Chinese women who joined them were lying on the grass and speculating about the beauty of the landscape.

The way down to the beach was by picturesque stone passages, very romantic. 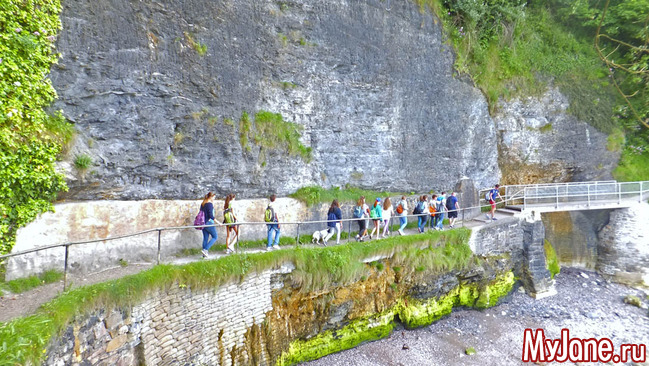 The beach itself was practically empty: the water was cold that day, and it was a little late for sunbathing. 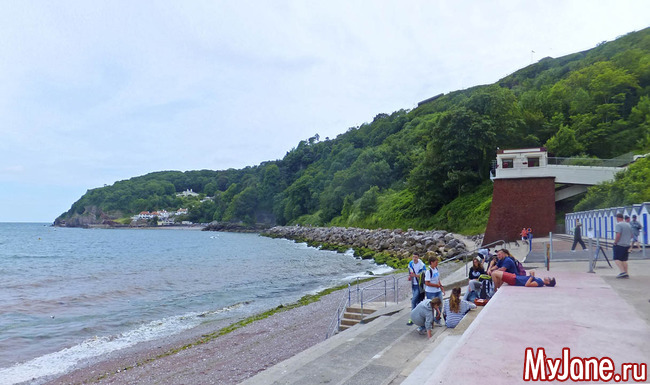 On the right were the changing cabins, and behind them was the cable car.

Some people used to walk back up, but I decided my health was better, so I took the funicular for twenty pence. 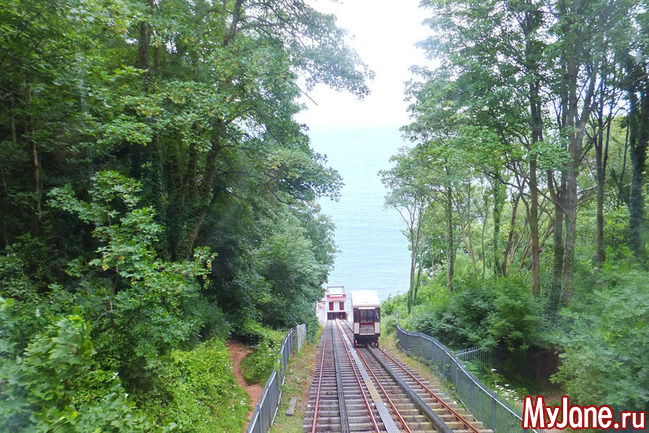 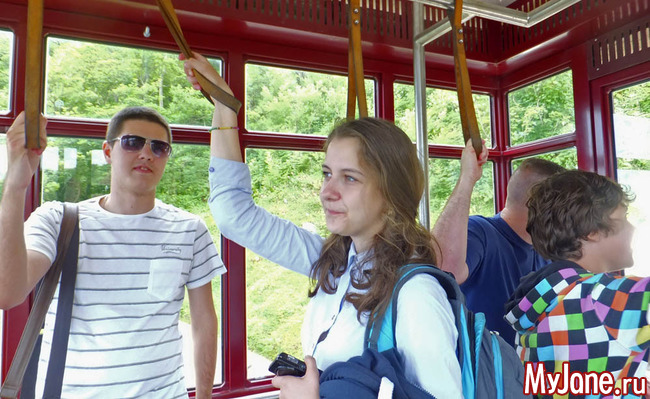 It was a good walk, and I remembered the beautiful view from the cliff for a long time.

Another day off was spent on a trip to the local amusement park . It is located near the village of Cockington, almost on the outskirts of town. In addition to the usual many and varied attractions, which the kids rushed to at a frightening rate, there is something like an eco-village.

That is, pets like this local breed of goat live and walk around in pens. 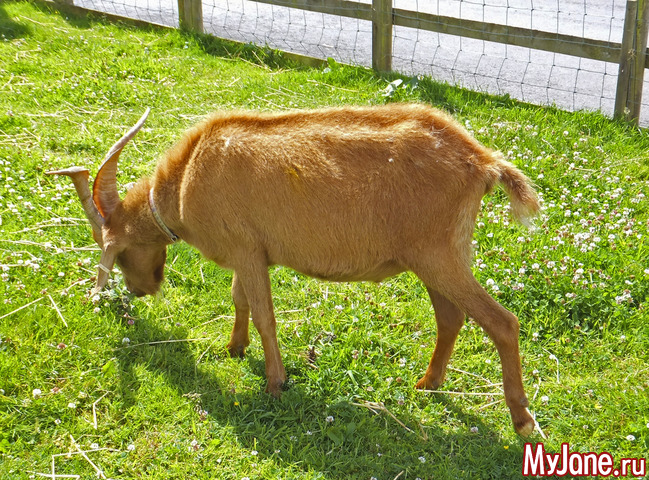 Here we finally got to see the local Dartmoor Ponies, of which we heard a lot on our trip to Dartmoor Nature Reserve. 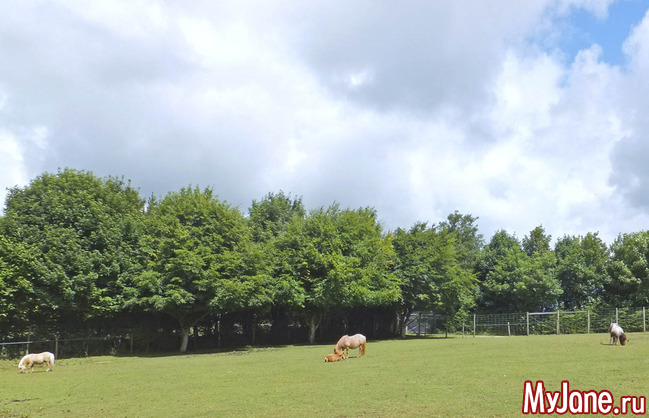 Here’s a cheeky peacock that kept crossing the road. 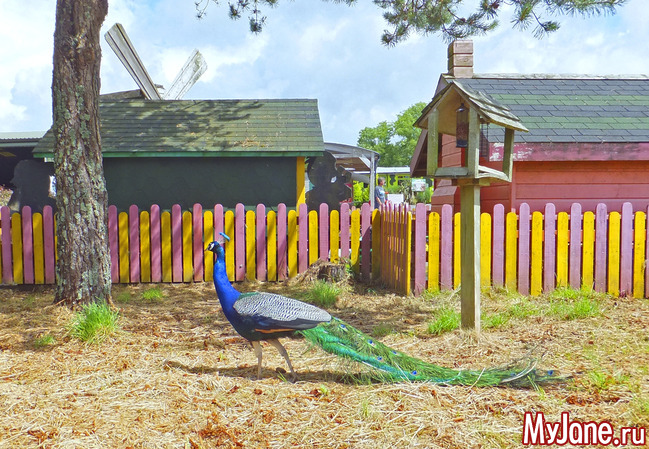 Special mention must go to the large Catch-Bird Pavilion. The vast majority of the birds were of Russian or Central Asian origin.

This is Tundra , polar owl. The sign on the cage was Tundra Snow Owl . 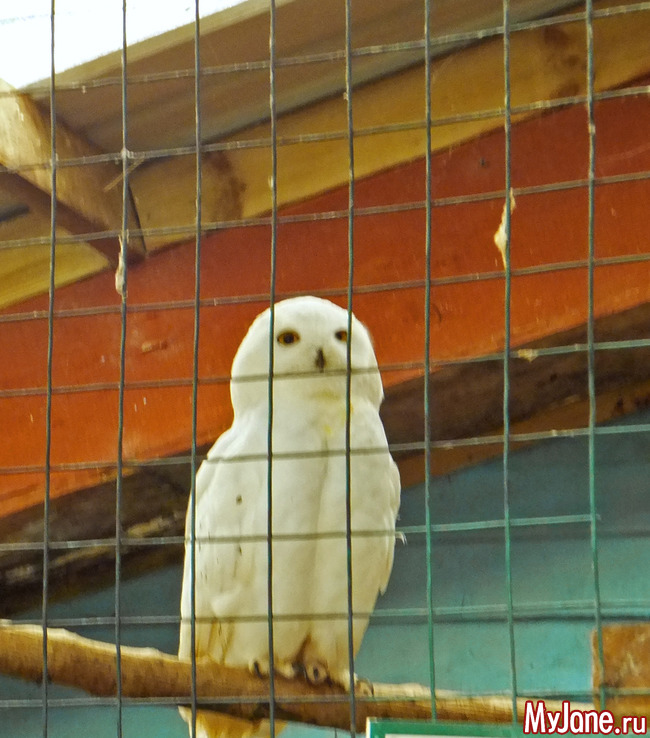 As the trainer told us they have good connections with Russian nurseries. The two big eagles were named Rasputin and Katerina. The man had to give a lesson in Russian history, during which a small crowd of interested visitors gathered. Then long thanked and bowed.

Bear – a very intelligent and obedient owl, took part in Falconry demonstrations . Translated as Falconry, but in fact – a display of bird training, a common attraction in England. 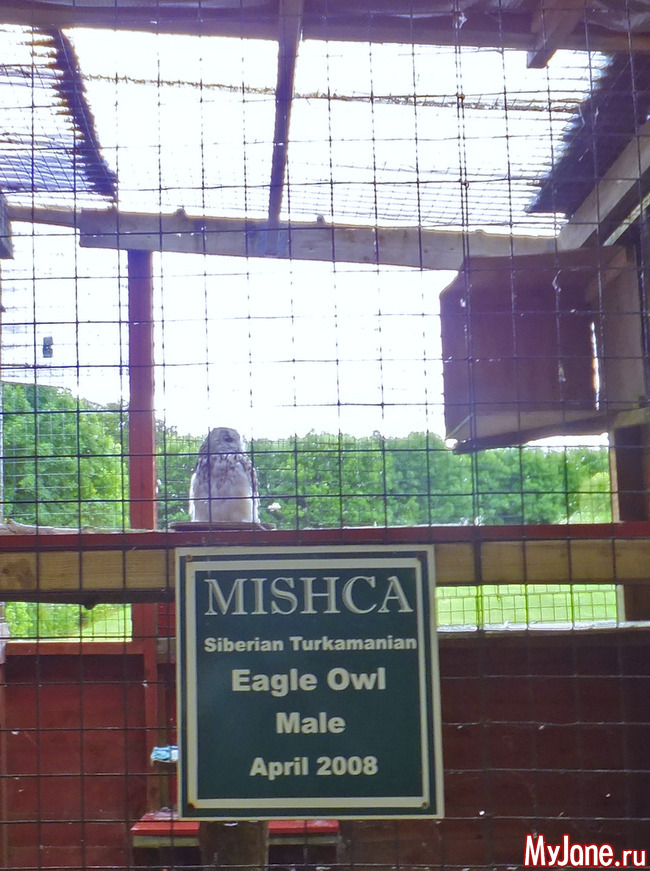 I’m not very fond of such entertainment, so I just rested. But the kids had a lot of fun!