French Polynesia (Fr. Polynésie française, Tait. Pōrīnetia farāni) is an overseas community of France, located in the center of the South Pacific. It borders the Cook Islands to the west, Kiribati to the northwest, neutral Pacific waters to the north, east, and south, and Pitcairn to the southeast. It includes the archipelagos: the Society Islands, the Tuamotu Islands, the Marquesas Islands, the Tubuai Islands, and the Gambier Islands, which are near Tuamotu and are actually a separate part of Tuamotu. The total area is 4 thousand km² (land), with a population of 287 thousand people (in 2009). Administrative center – the city of Papeete on the island of Tahiti (the largest island in French Polynesia, 1 thousand sq. km).

The islands of French Polynesia are of either volcanic or coral origin. Volcanic are most of the Society and Tubuais Islands, Gambier and Marquesas Islands; coral atolls form the Tuamotu Archipelago and are part of some other island groups.

Most of French Polynesia has a tropical, trade wind climate.

In the southern part, there are marked differences between warm winters and hot summers. The hottest and wettest season is from November to May, when northwesterly winds often blow. During the hottest months, the temperature usually reaches 32°C. The dry season (June to October) is dominated by southeasterly trade winds. The lowest temperatures are in July and August (in the south, up to 18-21 ° C).

The islands of French Polynesia are subject to invasion of tropical cyclones, sometimes of a devastating nature. The islands of volcanic origin differ sharply from the coral atolls in their vegetation. On the windward slopes of volcanic islands, dense forests of evergreen trees, interspersed with plantations of coconut palms, bananas, and other crops rise from the coast to the mountain tops. The leeward slopes are dominated by grassy vegetation.

Coral islands are covered with thickets of coconut palms. The animal world of French Polynesia is poor.

Rest in French Polynesia is expensive. Vacationers on the paradise islands are mostly Americans and Japanese, for all the obvious reason of the relative proximity to the archipelago.

The economy of French Polynesia is tourism. Fishing, souvenir production and pearl mining are also developed. The main money for the maintenance of the islands comes in the form of subsidies from France.

And now for the sad part. Since 1963, the Murroa Islands have had the necessary infrastructure for training and testing, as well as the life of personnel. Up to 1975, only aerial explosions were conducted at the Pacific Proving Ground. Then they had to be moved underground and, since 1981, to the central zone of Murooa Atoll under the bottom of the lagoon. At the moment, however, the radiation background on the nearby islands is even lower than in Moscow and is 0.08 μR/h.

Many islands of French Polynesia have second, Russian, names: Ryurik, Lazarev, Kruzenshtern, Rajewski and others. The Tuamotu archipelago itself has a second name – the Russians’ islands. These islands were discovered and described by Russian navigators – F. F. Bellingshausen, M. P. Lazarev, O. E. Kotzebue.

The descendants of Russian General Maxim Nikolaevich Leontiev played an important role in the fate of French Polynesia. His grandson, Alexander Leontief, was elected to the French Parliament from Polynesia, where he helped it gain internal self-government, and later became president of the French Polynesian government (1987-1991). A second grandson, Boris, founded the New Star Party, which advocated greater rights for indigenous Polynesians. The third grandson, Igor, was a multiple Tahitian bodybuilding champion and eight-time Mr. Polynesia title holder

More on the flora and fauna as well as culture and history in the following posts.

French Polynesia: The Last Paradise on Our Planet

Nukutepipi Atoll lies in the Pacific Ocean and belongs to French Polynesia . It belongs to the Tuamotu Archipelago and is part of the Duke of Gloucester Island Group. 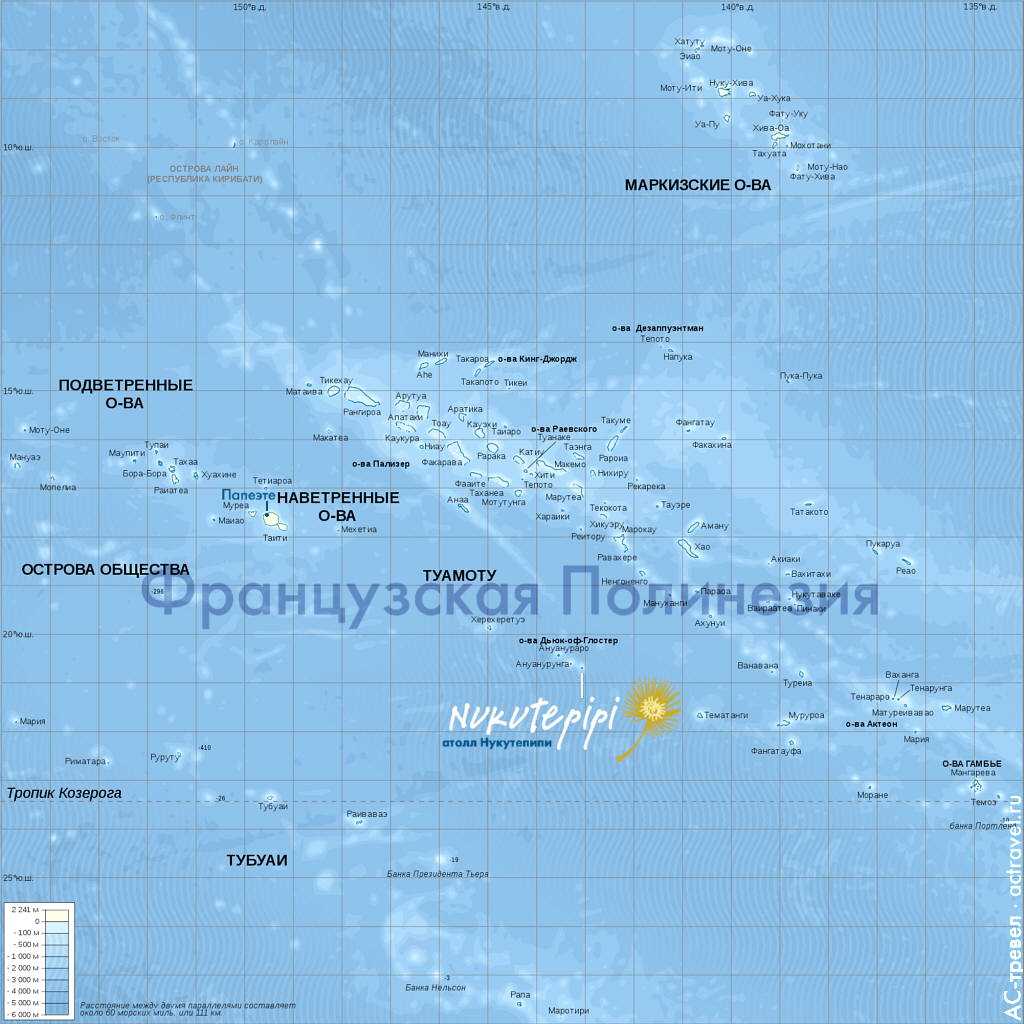 The circular atoll consists of two tropical forested Motu islets, in the center of which is a calm lagoon with an average depth of 2m and maximum depth of 17m. The atoll is 3.5 km long and 2 km wide. Nukutepipi has its own airstrip. 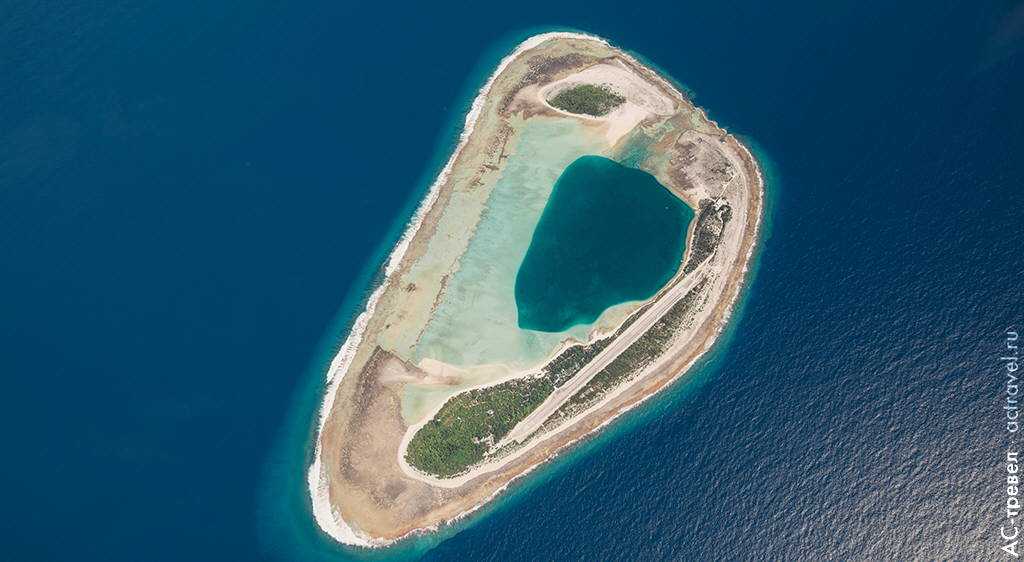 Guy Laliberté called for making the most of the experience at Fenoua. Construction work, secondary works and even furniture are done on site. Determined to preserve the flora and fauna of their Eden, the authors of the project established procedures and extremely strict sanitary standards to minimize the human footprint on this magnificent natural site. All building materials have been quarantined. Mostly solar energy is used; fresh water comes mostly from filtered rainwater. The primary forest remains intact throughout most of the atoll. 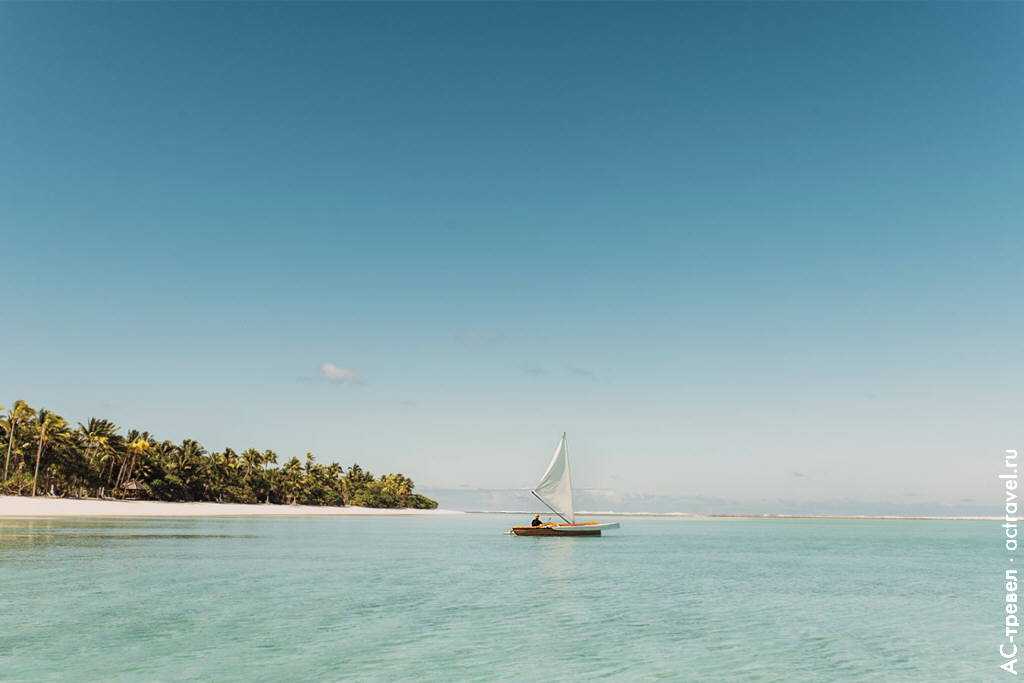 Today, a dream come true. Hotel Nukutepipi opens its doors, but only to a maximum of 52 guests. Forty people work there full-time, and the number of employees triples during the guests’ stay. 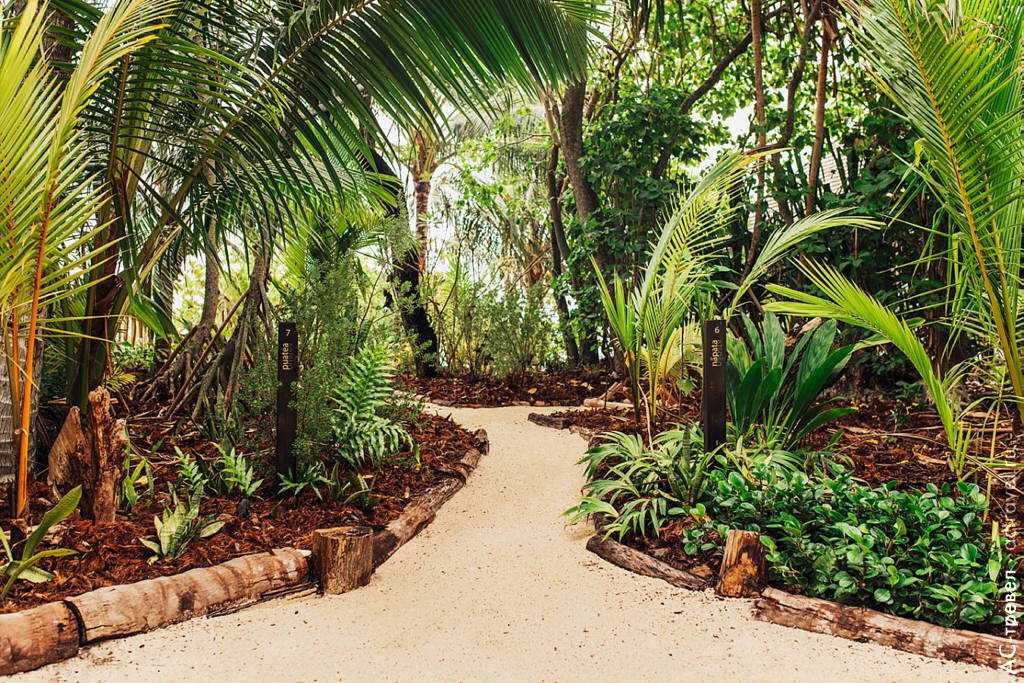 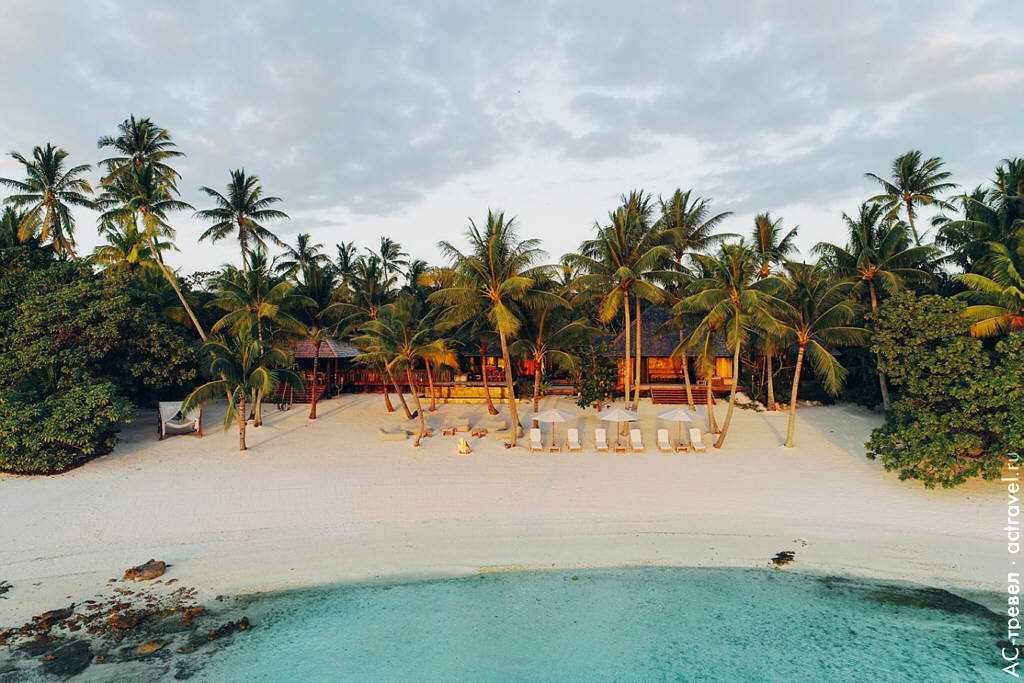 Along the pristine white sand beach, unique in the world, 1 master villa, 2 junior suites and 13 bungalows are built, all beautifully appointed and meticulously decorated in a rigorous and sophisticated style. 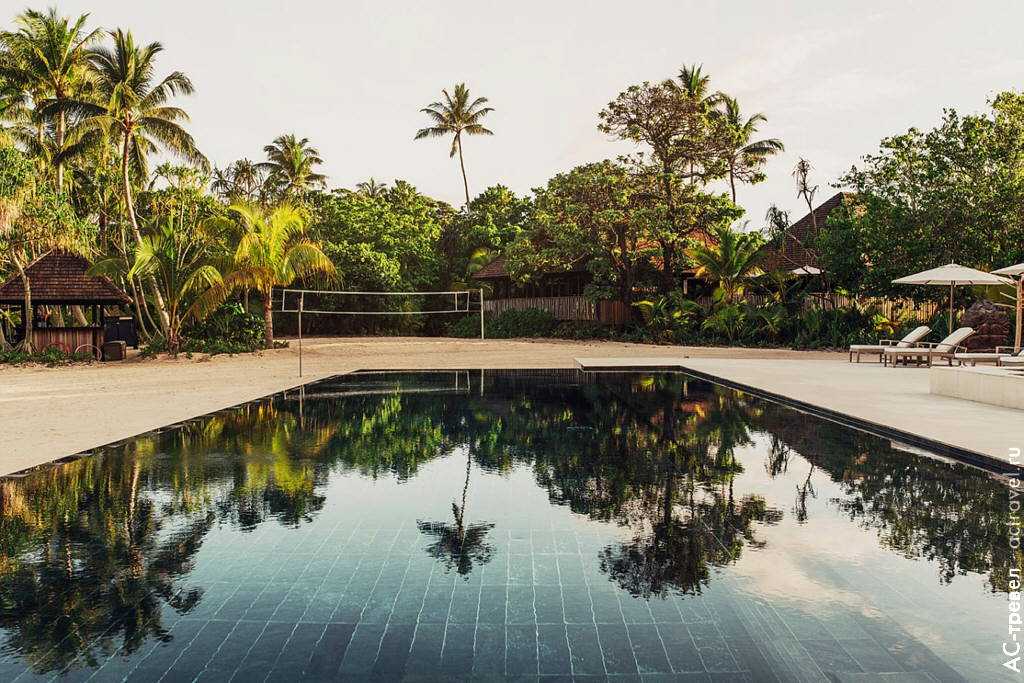 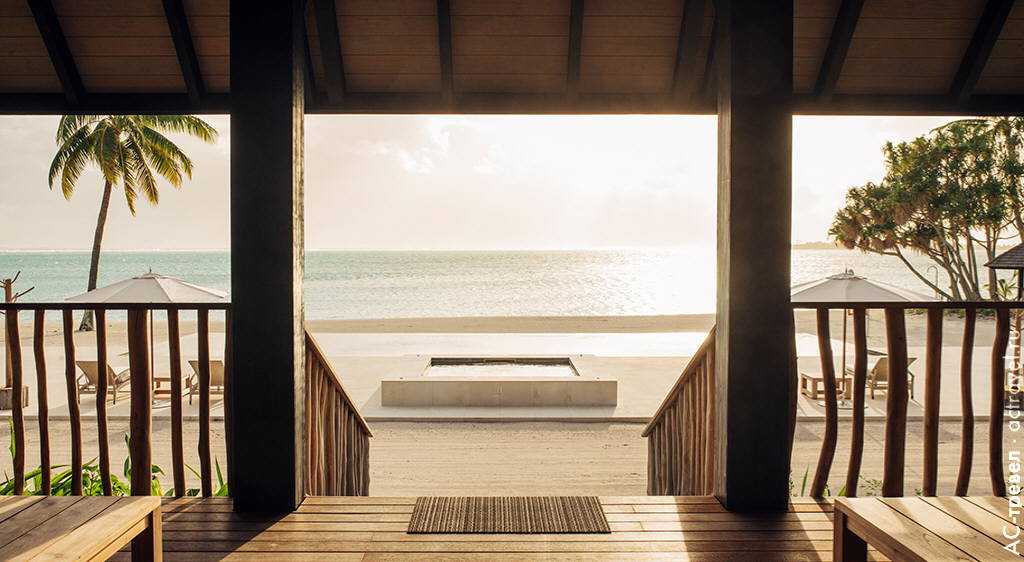 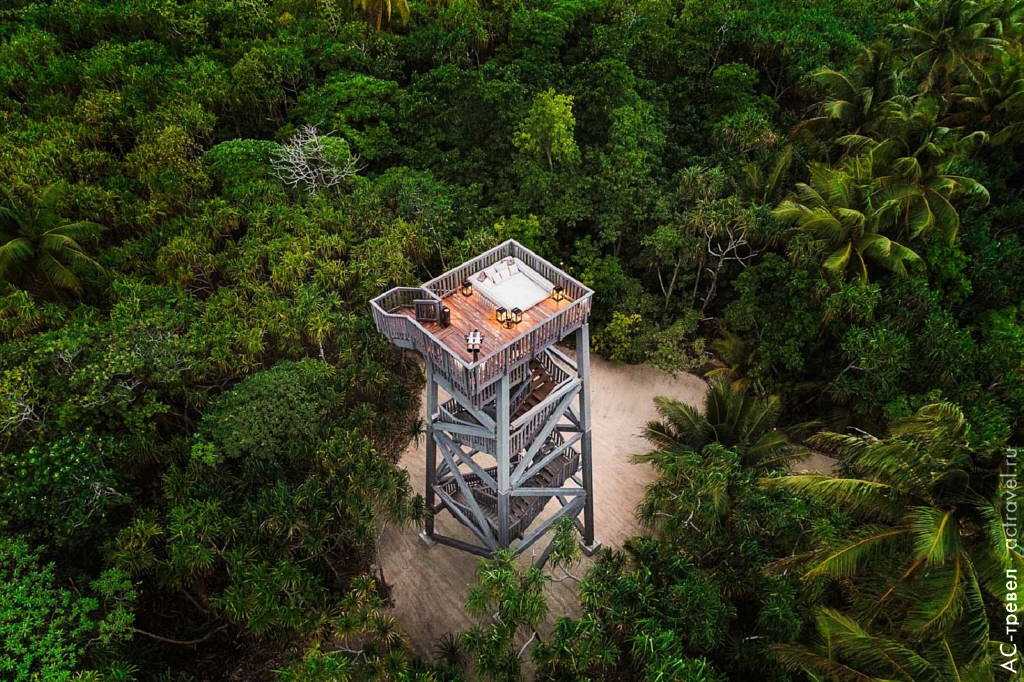 This magnificent place connects us to the universe and displays the face of nature in all its splendor!

READ
Getting to know Prague. 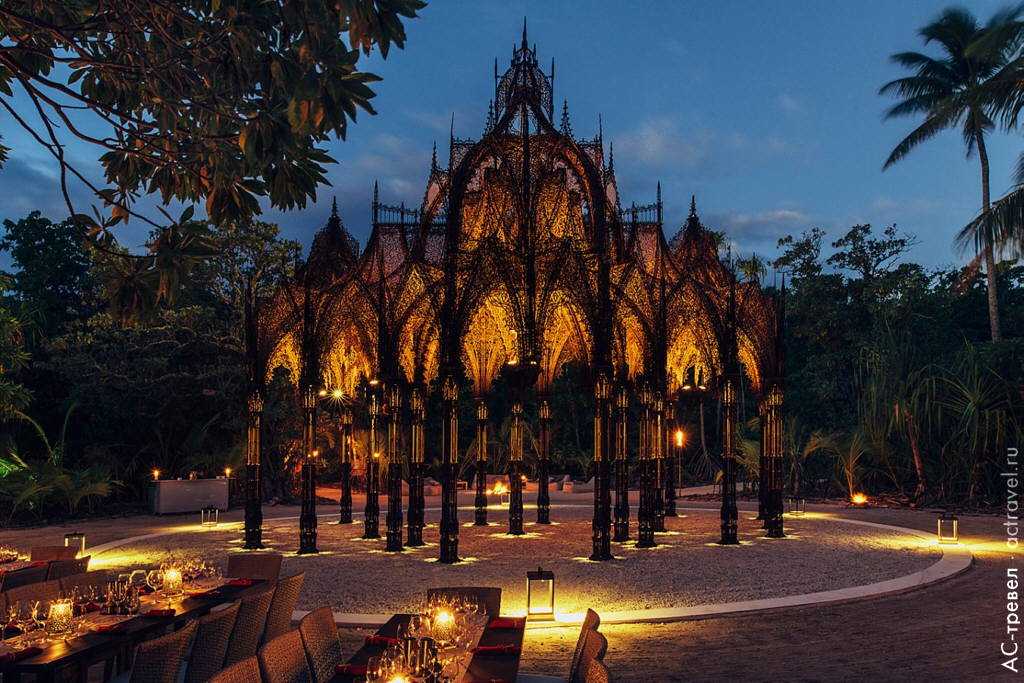 Time Zone, Language, Currency Time zone: Summer time minus 14 hours, winter time minus 13 hours. Languages: Tahiti, French. Currency: The official currency is the Pacific franc – CFP. Its exchange rate is fixed EUR 1 = 119,33 CFP. When exchanging cash, a fee of 4 Euros is charged regardless of the amount exchanged. International credit cards are accepted in all international tourist destinations (hotels, restaurants, stores, duty free). The exchange rate of the Polynesian franc to the dollar is 88.3 to the US dollar. Banks are open Monday through Friday from 7:30 a.m. to 3:45 p.m. At the airport, there is an exchange office on arrival and departure. There are no restrictions on import-export.Mobile Communications Cellular communication standard GSM 900 standard is developed on the islands is excellent. Roaming with the local network of Tikiphone SA (VINI – www.vini.pf) is available to subscribers of major Russian operators. Local SIM-cards can be purchased at the offices of Tikiphone SA, but it is recommended to check the card directly in your phone before purchase, as some GSM phones are not supported by local operators.Visa To enter French Polynesia you need a visa for overseas territories (the Schengen visa is not valid in French Polynesia). When flying via the USA (all Air France flights via Paris land in Los Angeles) it is also necessary to obtain a U.S. visa (as there is no transit passage at U.S. airports). If flying through Japan, a Japanese transit visa must be opened.

What souvenirs to bring from French Polynesia A favorite souvenir brought from the islands of French Polynesia are pearls, as well as colorful pareos, tayfay, and mother-of-pearl trinkets. The stores, as well as the offices of many establishments, are open from 8 a.m. to 5:30 p.m., with a break for lunch. Small stores and stalls are usually open until 10 p.m. Large stores close at 11 a.m. on Saturdays.

French Polynesia owns 118 islands located in 5 archipelagos: Society Islands, Astral Islands, Marquesas Islands, Tuamotu Islands and Mangareva Islands. The total area of the islands is about 4 thousand km2. Archipelagos arose as a result of volcanic activity at different periods of Earth’s history, which determined significant differences in the relief of islands of different archipelagos.

The Society archipelago includes the islands of Tahiti, Moorea, Bora Bora, Hua Hin, etc. They originated about 2 million years ago. The mountain slopes of the islands are covered with tropical forests. The islands themselves are surrounded by reef lagoons. Bora Bora Island is a tropical forested mountain range with the highest point Otemanu 727 meters. The island has historical monuments – the old Polynesian temples and the ruins of the naval base, built by the Americans during the war with Japan. The islands of the Tuamotu Archipelago are more ancient than the Society Islands. After being formed by volcanic activity, the islands were exposed to erosive processes for a long time and were gradually submerged in the ocean. The volcanic rocks have overgrown with corals and today the archipelago comprises 80 atolls, including Manihi and Rangiroa atolls. These atolls are considered the best places for diving in Polynesia. Manihi Atoll is famous for black pearl production and a rich underwater world.

Rangiroa Atoll’s lagoon is one of the largest lagoons in the world. Rangiroa means “immense sky” in Polynesian. Two straits connect the lagoon to the ocean. The lagoon’s coral reefs are home to many fish, mantas, and sharks (gray shark and sword shark); dolphins swim along the shores. The Gambier archipelago includes 10 high mountain islands, and there are plantations of black pearls. Astral Islands only 5.

The Marquesas Islands are located 1500 km northeast of Tahiti and are known for their pristine, wild nature. The French painter Paul Gauguin lived here for a long time. Many of the islands of French Polynesia are uninhabited.

READ
La Rochelle - discover the city of the Three Musketeers!

Rangiroa is known for diving. Luxurious corals, a variety of reef fish, as well as barracudas, hammerhead sharks and gray reef sharks, of which there is a great variety, attract tourists from all over the world. The perimeter of the amazing, little-explored coral reefs in the lagoon reaches 278 km. Diving centers on the island are equipped with modern equipment, with experienced instructors. Both beginners and experienced divers will be surprised by the good service and the richness of the marine world of Rangiroa.

During the promotional tour to French Polynesia and Easter Island in March 2008, organized by AS Travel, our company visited Rangiroa :

In French Polynesia, the diving season lasts all year round, but the best period is from April to November. The visibility under water reaches 50 meters, the water temperature in winter season – 28 degrees, in summer – 30 degrees. The water salinity in the dive sites is about 34%о. Water temperature remains almost the same up to a depth of 50 meters. For diving a lightweight 3 mm wetsuit or lycra suit is recommended.

Terrain and depth A variety of dive sites near the islands of Polynesia. Diving can be done from the shore in the calm waters of the lagoon at depths of 15-20 meters. More experienced divers are offered dives on the outer side of the reefs and in the straits connecting the lagoons with the ocean. The tidal currents pick up considerable force in these areas.