Fraser Island, or Great Sandy Island, is the world’s largest sand island off the east coast of Australia. The island has an elongated shape along the coast, its length is about 120 km, width – from 7 to 23 km. The area of the island is 1840 km². Since ancient times, this picturesque corner of nature the Aborigines called “K’gari”, which in translation from Butchulla means “paradise”.

In 1992, the paradise island of Fraser was included in the list of UNESCO World Heritage Sites as a unique natural monument. The dunes that make up the island were formed about 400,000 years ago and are 240 meters high. The island has more than 40 freshwater lakes, the so-called Hanging Lakes. The largest of them, and the largest hanging lake in the world, Boemingen covers an area of 200 hectares.

The west coast of the island is occupied by mangrove forests and swamps, while the east, facing the ocean, is a white sandy beach about 100 kilometers long. In the northern part of Fraser there are pristine rainforests of the equator. The animal world of the island is also interesting. In small well-warmed lakes there are freshwater turtles, on land you can find a wild dog Dingo. And this is not all the flora and fauna of Fraser Island.

Led by a ranger, visitors can watch raptors and stingrays on a canoe trip, and on the island itself there are more than 354 species of birds. Rare bird species like the ground parrot, great eagle owl, and 18 species of birds of prey are found here. Walking under the sail, you can see dugongs, turtles, dolphins and sharks. On a walk along the beaches and along Cape Indian Head, from August to October, you can witness the migration of humpback whales. And on a night trip, you’ll encounter a bat, a flying fox, a sugar-flying possum, and a frog. The island is also a must-see for kangaroos, wallabies, possums and echidnas.

This charming island gets its name from a married couple, James and Eliza Fraser. In 1836 the ship Stirling Castle, captained by James Fraser, was wrecked off the island and the surviving sailors came ashore. The relationship between the natives and the Europeans was hostile and even aggressive. Even today, travelers listen with interest to the stirring story of a strong woman, Eliza, who survived the loss of her husband and newborn baby and was captured by the Aborigines.

On Fraser Island, history is literally in the air. You can trace 700,000 years of evolution through the wildflowers and centuries of climate change through the huge sand dunes. Travelers will be interested to see with their own eyes the hills formed by the domestic waste of primitive people, fishing gear, notches on trees and camp sites that are at least 5,000 years old.

Visiting the colored Arch Rocks, you will see the place where Aboriginal male ancestors played the didgeridoo to migrating humpback whales, and Moon’s Heel, a sacred place for women where they gave birth to their children. Real explorers in Happy Valley will find the wreckage of the steamboat Mahino, built in 1905 and serving as a luxury trans-Tasman passenger ship, later a floating hospital during World War I, and then washed ashore during a cyclone. Visit the abandoned McKenzie Wharf, originally used to connect loggers to the mainland, and during World War II used by the famous Z Force assault force. Thus, step by step, the rich history of the island will be revealed.

After all the amazing discoveries, you can stay in an eco-friendly boarding house and treat yourself to a wellness massage, exotic cocktails and gourmet food, or enjoy the solitude of a house overlooking the coast. There are plenty of hotels and individual cottages on the island with luxurious views of the ocean and surroundings. And for a complete reconnection with nature, you can pitch your tent at one of the following locations: the campground at Central Park, Bumangin, McKenzie, Dundubara, Waddy Point, Wathumba, Dilley Township, Cathedral Beach, or East Beach.

READ
The 24 best sights of Bremen - descriptions and photos

Once you’ve been to Fraser Island for at least a day, no one has any doubt why it’s called “paradise. Hundreds of freshwater lakes with turquoise and clear waters, ancient rainforests, snow-white quartz beaches – all this creates a unique magical landscape, looking at which you can forget about everything.

Fraser Island is one of Australia’s resort islands, made up entirely of sand, and that’s what makes it unique.

It is located along the east coast across the strait from Hervey Bay. In the Aboriginal language, Fraser is called “Kgari Paradise”.

It is true – the wide and clean sandy beaches, rainforests, and blooming heather meadows under a clear blue sky suggest just such a comparison. 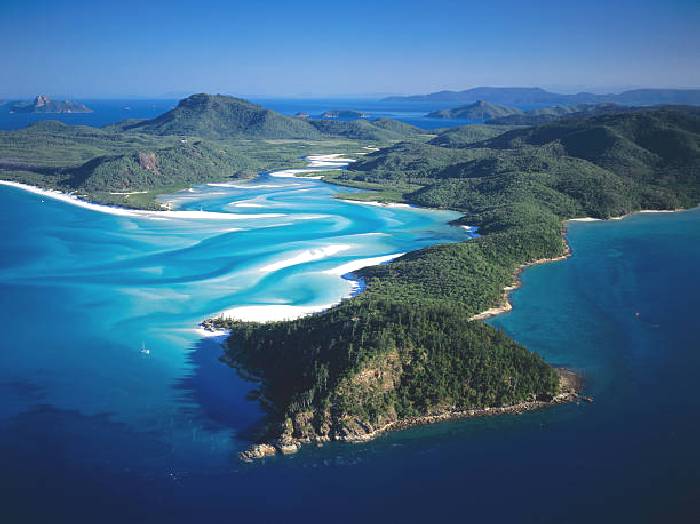 Fraser is considered the largest sand island in the world. It stretches more than 110 km long and up to 23 km wide, and the island’s sand dunes are its landmark. These natural structures are almost 250 meters high. In addition, they are completely white and on the green background of the forests covering the island look almost like snow.

Fraser got its name thanks to a couple of Europeans, who were wrecked off the coast of the island, lost in the warm waters of the Pacific. I must say that at that time – 1836 – the relationship between the natives and Europeans were quite aggressive, so the local tribes were not too happy about such a neighborhood. As a result, the Fraser couple was held captive by the natives for some time. In 1992, Fraser became part of the UNESCO World Heritage Site and was designated a nature reserve. Despite this, it is very popular with tourists and travelers. 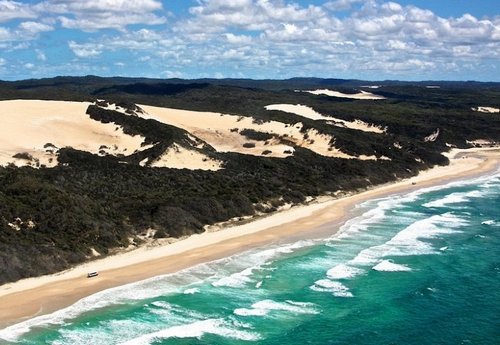 Surprisingly, on this island, washed on all sides of the salty ocean, quite a lot of freshwater lakes. They are called “hanging” because they seem to hang between the salty waters of the Pacific. There are over 100 of them in all. One of them is Lake Mackenzie, located in the woods 100 meters above sea level. It is the most beautiful freshwater lake. Its water comes only from precipitation. It is almost distilled, so no freshwater organisms can live in it. But around the lake there is a snow-white beach of the purest quartz sand.

READ
Top 13 most beautiful forests in the world 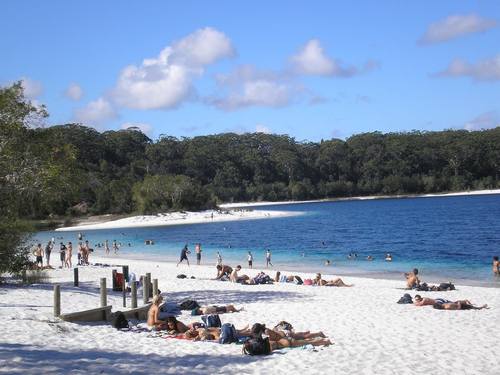 And the largest of them is Boemingen, which is about 200 hectares in size. The water in the lake is cool and fresh, in stark contrast to Australia’s mostly hot climate. For this feature Boemingen is so popular with tourists. On the shores of the lake grow eucalyptus and palms, mangroves and bamboo, rainforest. 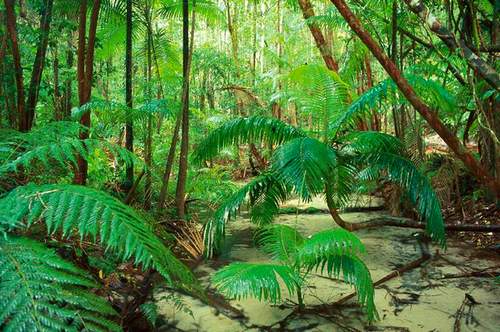 Today, the indigenous population of the island is only 400 people, 11 of whom are descendants of the very tribes that held captive the Fraser family. It should be noted that a few years after the captivity of the shipwrecked Europeans, colonizers from Europe came to the Fraser and formed many new settlements. Of course, the natives were against such interference, and war ensued. Unequal enemy forces simply exterminated the small and poorly armed army of Australian tribes. Virtually the entire local population was wiped out. Now Fraser is just a place of entertainment for tourists, which is equipped with a tourist complex: a hotel, motel, swimming pool, bar, store and cafe. You can get to the island by small plane, but it is better on the mainland to rent a car and cross by barge. Having your own wheels can familiarize you with the island much better. 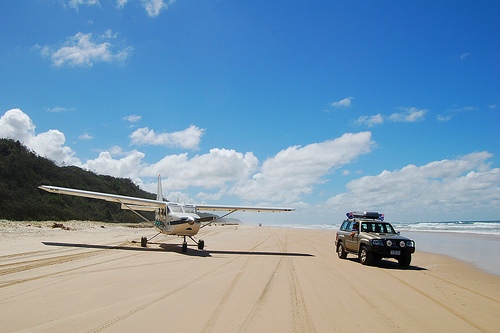 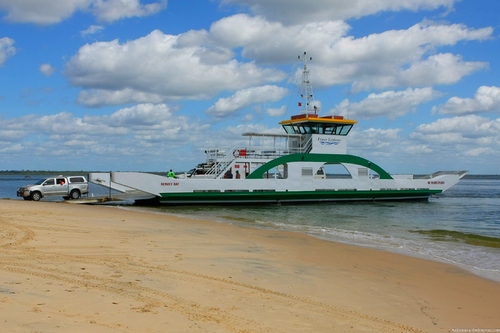 Fraser has a milder climate than the rest of Australia, and the island has a rich and varied nature due to the abundance of moisture. There are mangroves and swamps in the western part of the island, the east is a string of beautiful sandy beaches, and Great Sandy National Park lies in the northern part of the Fraser. 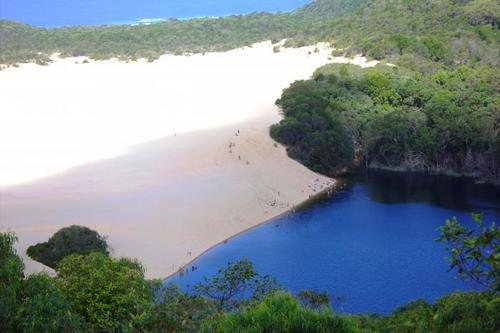 Because the flora of the Fraser is so diverse, there is also a wide variety of animals. For example, several species of turtles are found in the freshwater lakes. Bats and foxes can be seen in the forest, as well as classic Australian wildlife such as possums and wallabies, kangaroos, echidnas and dingoes. Canoe trips are available for visitors to observe the animals in their natural habitat. In addition to wildlife, it is not difficult to spot electric rays, sharks and dolphins in the water surrounding the boat. The migration routes of humpback whales that swim to Antarctica also pass Fraser Island – these animals can be observed from August through October.

READ
The 30 best sights of Las Vegas - description and photos 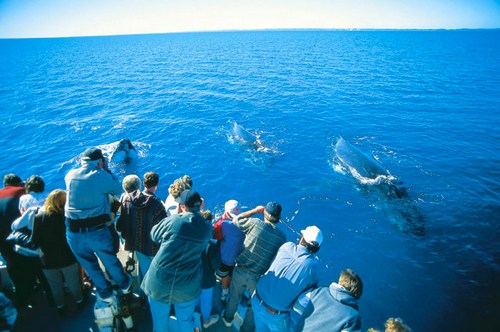 The world of birds also does not disappoint birdwatchers. There are about 354 species of birds on Fraser, 18 of which are considered raptors. Birds that are rare species, such as the puffed owl and the ground parrot, can also be seen. 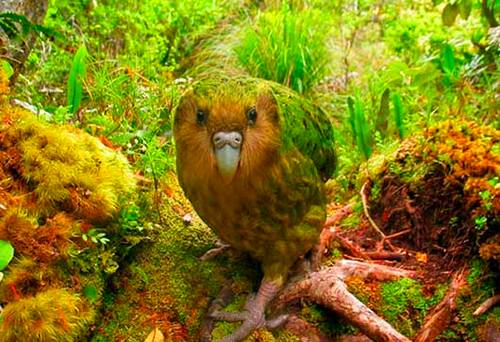 Since the tourist infrastructure of Fraser is quite developed, in addition to a comfortable beach holiday, tourists are offered a variety of sports activities, among which there are extreme ones. For example, surfing or bodysurfing through the sand dunes, followed by a noisy dive into the lake. Active activities also include a four-wheel drive along the coast, where you can admire the Cathedral Rocks – amazing and majestic piles of multicolored sand. Mini planes fly over miles of beaches, and small boats whisk tourists down the rushing Eli Creek River straight to the ocean. Many travelers come to Fraser Island just to go sailing and observe sea creatures in their natural environment. 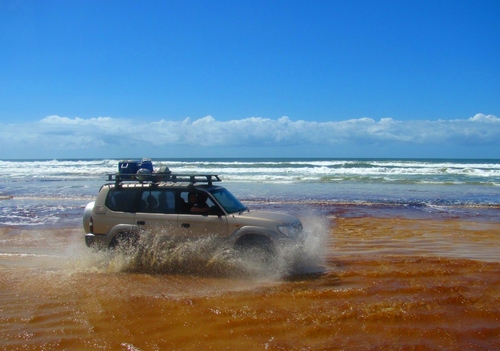 Tours conducted on the island usually include Happy Valley, where the wreck of the ship Mahinot is located. This enormous ship was built in 1905 and served first as a transatlantic liner and later, during World War I, as a floating hospital. The ship was later washed ashore on Fraser during a cyclone. 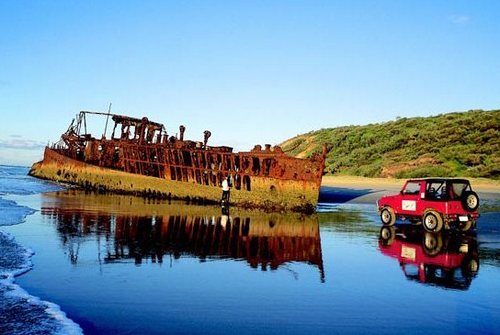 To preserve the island’s ecosystem, the people of Fraser actively promote wild or green tourism, which involves sleeping and living under the open sky or in a tent and moving around the island in a Jeep SUV. This way of traveling allows you to admire the unspoiled natural beauty of Fraser without harming the ecology of one of the most amazing islands in the world.

Fraser Island, the photo of which you can see in this album, is the largest sand island in the world. It is located off the east coast of Australia.