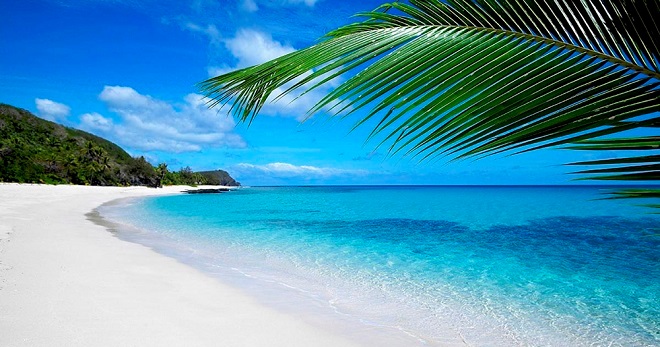 Fiji Islands – this is literally a paradise for those who love nature, endless sea, white sand and solitude. Holidays on the islands of Fiji will be remembered for a lifetime bright and colorful photos, and in your dreams you will long to see the cleanest long beaches, lagoons with blue water, coral gardens and hills covered with thickets of wild forests. Despite the industrialization that has touched this corner of paradise, it does not have all that it usually brings with it. Even nature has been gracious enough to rid the islands of malarial mosquitoes, spiders, and poisonous reptiles.

Fiji, an island nation and archipelago of the same name, has about three hundred islands (including the “Heart of Fiji”, Tavarua Island), of which only about a hundred are inhabited by humans. At the same time, half of the state’s territory is one island, Viti Levu, on which Suva, the capital of Fiji, is located. The second largest piece of land is Vanua Levu. The rest of the islands are small mounds of sand towering on coral reefs. In total, Fiji covers an area of just over 18 thousand square kilometers, with a population of 849,000 people.

In order not to wonder for a long time where Fiji is, it is enough to look at the world map in the South Pacific, slightly north of New Zealand. It is this area that first welcomes the new day, enjoying the rays of the rising sun. 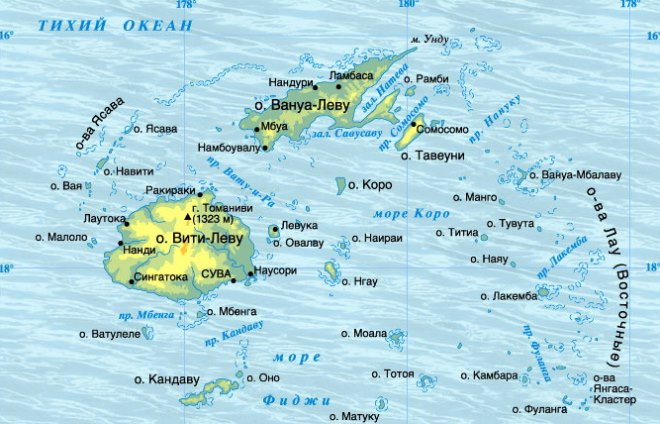 In its structure, Fiji is a republic, whose flag shows the national canvas of Great Britain on a blue background and the armorial shield, which is the centerpiece of the coat of arms of the island state. These elements are reminiscent of the colonial past of the islands. Fijian and English are considered the national language of Fiji, but conversations in Hindi are often heard here. This is dictated by the ethnic composition of the state, of which over 37% are Fijian-Indians. 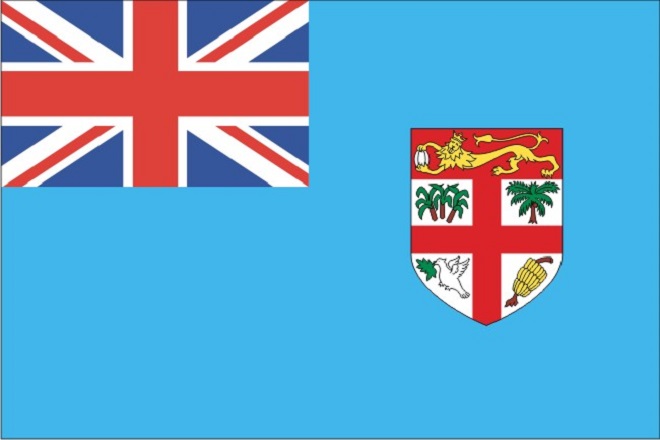 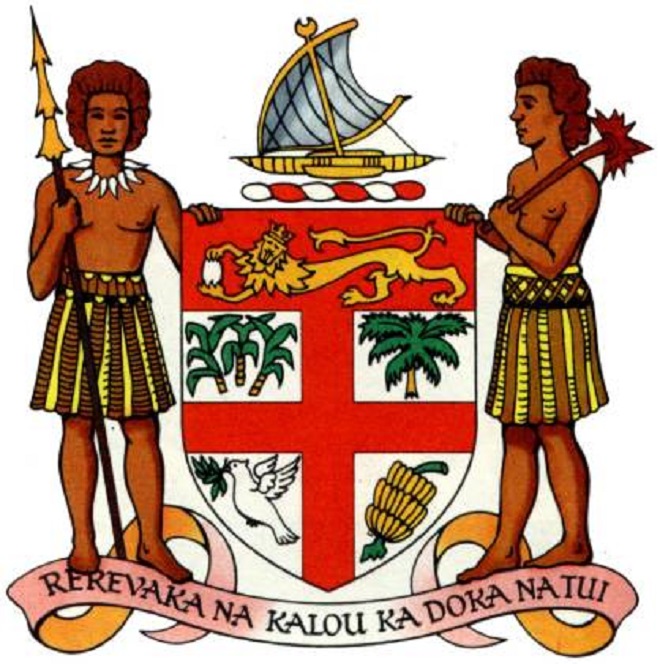 The main currency of Fiji is local dollar. It is not customary here to pay with foreign currency. There are no problems with currency exchange, but the easiest way to convert U.S., Australian and New Zealand dollars.

Climate and nature in Fiji

The weather on the islands is influenced by a humid, hot, tropical climate. Summer begins in November and ends in late May, but the average temperature fluctuates between +24 … +28 ° C throughout the year. Winter differs from summer only in the lack of a large amount of precipitation. In summer the rains come with an enviable frequency, even hurricanes in November and April are not uncommon. But the water in the inter-island sea of Fiji and the Pacific Ocean is always kept at 25-27 ° C. Tourist season on Fiji lasts from May to November, when weather conditions are the most comfortable for rest.

The unique climate is favorable to a huge variety of flora and fauna. Unique kinds of flora and fauna are miraculously preserved on the islands. For example, on the territory of the cultural center Orchid Island, which is located near the Fijian capital, live rare species of iguanas, and in the ecopark Kula you can see birds living in the tropics in the mountains. 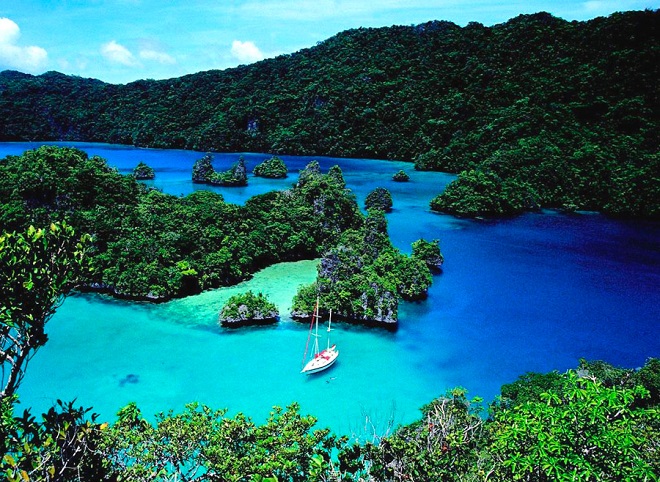 Cities and Resorts of Fiji

Some of the largest cities in Fiji include: Suva, Nandi, Lautoka and Sigatoka on Viti Levu, Savusavu on Vanua Levu and Levuka on Ovalau Island.

The beaches on all islands are sandy, and the entrance to the sea or ocean is mostly gentle. Each hotel has its own stretch of beach, but any vacationer can sunbathe here. On the island of Denarau, separated from Viti Levu by a channel with a road bridge, there are only two establishments, but they are considered the best in the world. There are a few bungalows for those who prefer a “wild” vacation.

READ
The 20 most beautiful places to visit in Spain

There are 12 villas at Vatulele resort with endless snow-white beaches and palm groves. They are at a sufficient distance for a comfortable stay, and each has its own beach. If you are a Fiji wedding trip holder, we recommend staying on the island of Vakaya. The maximum number of guests is only 12 people. You will remember this honeymoon for a lifetime! The most luxurious and expensive options you will be offered by the owners of 30 villas, located on the resort island of Vomo. By the way, a wedding in Fiji – a common thing. There are so colorful and fascinating ceremonies, that couples from all over the world come here to get married. The most popular is Yasawa Island. 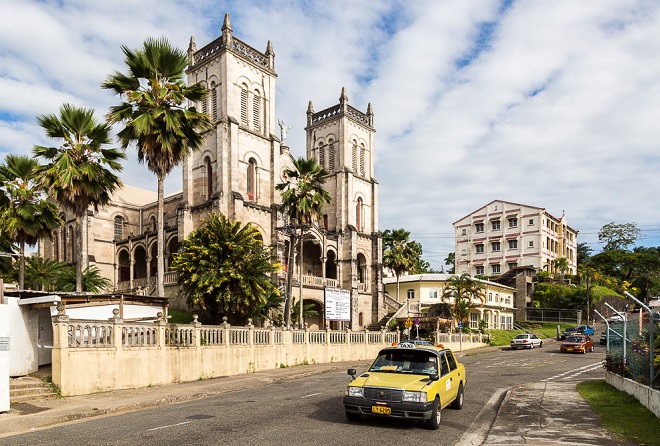 Entertainments and sights in Fiji

While relaxing on the sandy beaches of Fiji, find time in your busy schedule to visit local attractions. Most of them can be seen as part of a guided tour, and some are worth visiting on your own. In particular, we are talking about such places: 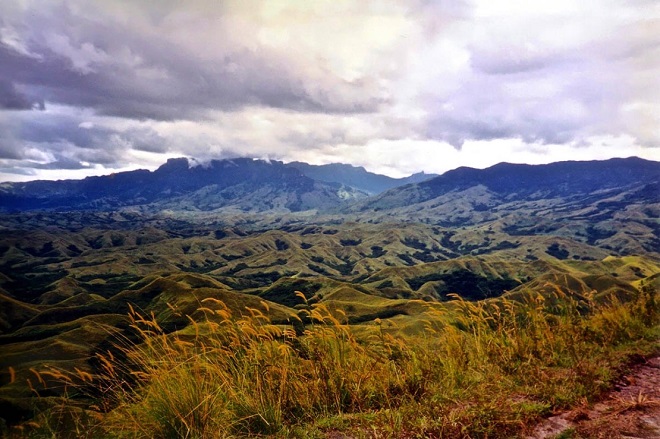 Visits to a sugar cane plantation, colorful ethnic markets, a dolphinarium will give bright impressions. Residents of Fiji fervently respect the traditions, so you can see more than one ritual procession and show with national dances and songs. Among the available attractions for tourists should also note diving, rafting on traditional rafts “bilibili”, scuba diving, kayaking and water skiing.

If you come to Fiji in search of beauty and solitude, but are not limited in financial resources, you should choose a home in small remote islands. For example, you can choose Sheraton Denarau Villas, Tokoriki Island Resort or Shangri-La’s Fijian Resort & Spa. Get a lot of impressions and new experiences tourists have in an unusual underwater hotel in Fiji – Poseidon Undersea Resort. It is located near Eleuthera Reef and gives the opportunity to feel a part of the underwater world. At a depth of 12 meters there are 25 rooms of 51 square meters.

If you are puzzled by the search for low-cost accommodation, you can solve this question immediately upon arrival in Fiji. Most often the cheap accommodation options are based in Suva, and you can find out about them at the offices of local travel agencies. 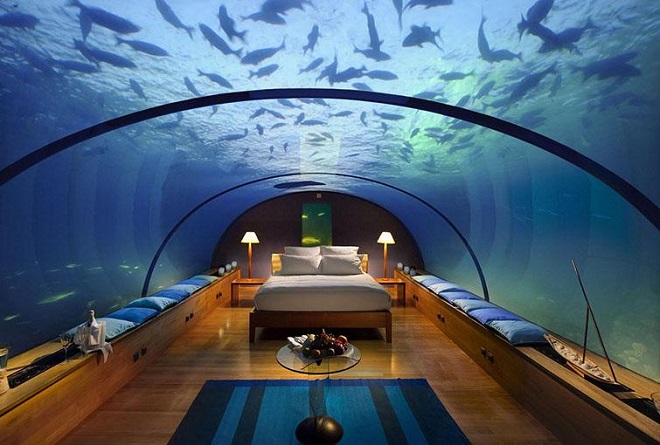 Cuisine and restaurants in Fiji

Traditional food in Fiji tends to please the stomachs of tourists. In addition to the native dishes, you can try local variations of Korean, Indian and Chinese culinary traditions. Fijians like to cook their food in an earthen oven (“lovo”), which gives it an interesting flavor. Seafood, root vegetables and coconuts are most often used. Besides, the tourist is recommended to try such samples of local color among dishes, as pickled fish stewed in coconut milk and lime juice (“kokoda”), leaves of colonization baked in the same coconut milk (“palusame”) and traditional for Fiji drink “kava”, made from roots of yangon. By the way, the latter has a psychotropic effect on people, so you should be careful with its consumption. 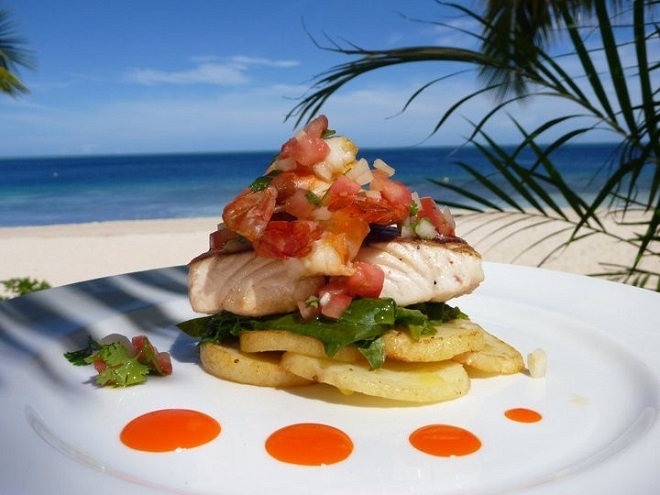 Due to geographical peculiarities, Fiji has practically no developed network of public transport. In Suva and the suburbs ply buses, but they do not have a clear schedule. In the cities, tourists are best served by cabs. You can travel between islands by boat or, if budget allows, by plane.

Fiji has two international airports: Nadi, located in the western part of the island of Viti Levu, and Nausori, which is located near the capital. 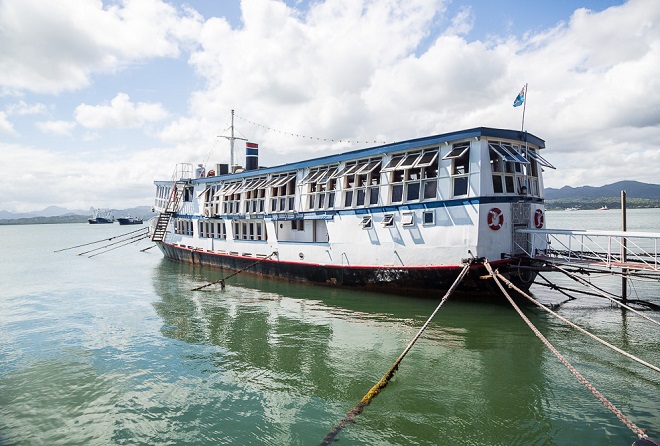 All shopping in Fiji is concentrated in Lautoka, the second largest city in Viti Levu. It is here that the largest ethnic market in the country is located. Most often brought from Fiji are fruits, black pearl jewelry, coral products and shells. Popular souvenirs are also various ritual masks and subjects, sharks’ jaws and teeth, products from sandalwood. 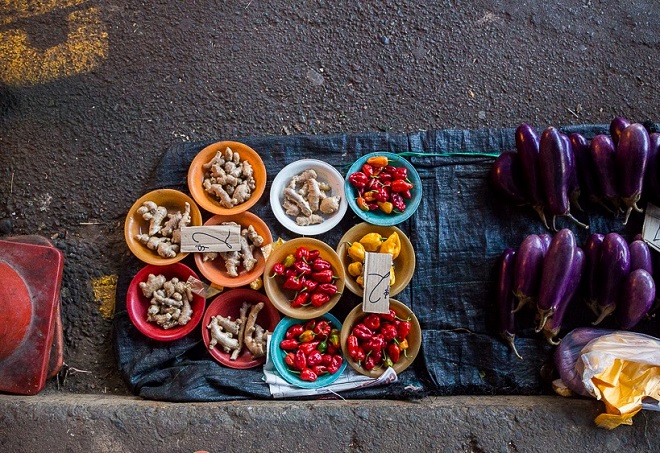 Life and traditions of Fiji

Fijians are very hospitable people, especially if their guests honor the local traditions. For example, going to visit a Fijian village, be sure to buy a yangon root as a gift for the local chief. This is not only a way to pay your respects, but also an opportunity to participate in the traditional drinking of cava. When you are a guest, remember that touching the head of the locals is the strictest taboo. Also among the Fijians is considered bad form to refuse a gift – so you can insult the giver.

An interesting fact about tourism in Fiji is a ban on the import of any food, substances of plant or animal origin. The government argues that this is due to the fragile ecosystem, which can be violated by any little thing. The violator is subject to a fine of $10,000. 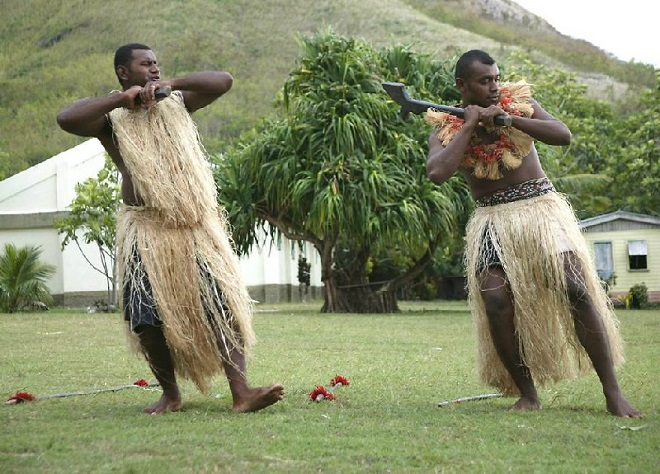 Fiji’s native population was once known as cannibals. With the arrival of missionaries and Christianity, the tradition of eating people for breakfast has disappeared, so tourists should not be afraid of this. However, remember about the basic precautions: do not hitchhike, leave all valuables in the hotel safe, make arrangements for water transport rentals there in advance. In addition, you should know that the coast of the islands is inhabited by several species of poisonous creatures and sharks. Before a trip to Fiji it is recommended to get vaccinated against cholera, typhoid, polio and hepatitis B.

READ
Why Jordan is worth a visit

For Russians do not need a visa to Fiji, if not to prolong the trip longer than 90 days. A tourist automatically gets an entry permit at the airport with a valid passport, return tickets and proof of funds in the bank account.

How to get to Fiji?

The most economical option to travel to the islands is to use the services of Korean Air. On the way one has to make one connection: from Moscow to Seoul, and then change to a flight to Nadi. On the way back it is necessary to spend overnight in the capital of South Korea, therefore it is necessary to apply for the Korean transit visa in advance.

It is also possible to get to Fiji via Tokyo on Japan Air Lines and Air Pacific, but this option is more expensive and takes longer.