Lithuania is not only sights of Vilnius, beaches of Klaipeda, and ancient architecture of Kaunas, but also unique and very delicious Lithuanian cuisine. So, what should a tourist who goes to this authentic and original country try?

Features of the Lithuanian national cuisine 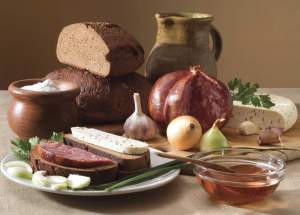 If you’ve been to Lithuania and haven’t tasted the local cuisine, then the trip has gone in vain. Comparing Lithuanian cuisine with Estonian and Latvian, it should be noted that it is hearty and simple. If in other Baltic countries seafood is mostly used, in Lithuania they prefer:

The true queen of Lithuanian cuisine is potatoes – a vegetable that can be boiled, fried, baked, and used to prepare a variety of delicious dishes.

The country can be conventionally divided into four regions with their own culinary peculiarities: 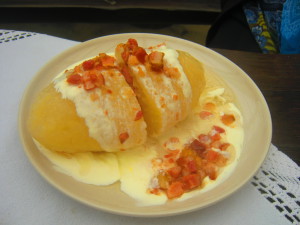 Zeppelins are a real calling card of Lithuanian cuisine. They are something like big potato dumplings with different fillings: cottage cheese, meat, mushrooms, etc. The name of this dish comes from the German “Zeppelin” (blimp), because the shape really resembles this flying machine.

In the classic recipe of zeppelins necessarily includes raw and boiled potatoes – thanks to the large amount of starch, the dish does not boil. In addition to boiled zeppelins, you can also find other versions of them: fried, with open stuffing, etc.

This nourishing and quite nutritious dish can be tasted at any restaurant in the country, but the real experts in its preparation are considered to be the cooks of restaurants in the historic part of Vilnius. A portion of zeppelins costs about 11-12 litas (about $4). 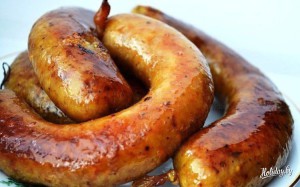 Vedarai is the second most popular national Lithuanian dish. It is essentially a potato sausage: during preparation, pork intestines are stuffed with grated potatoes and bacon (sometimes barley grits are added to the recipe) and fried until golden brown.

You can try vedaray in almost any restaurant around the country or even buy this sausage in the supermarket. The cost is about 10 litas ($3+).

This is a light and tasty first dish that is perfect for health food lovers. It is a cold beet soup with a kefir base and the addition of cucumbers, hard-boiled eggs and other ingredients. The “highlight” of the soup is boiled potatoes with dill, which is served separately.

The dish is prepared in most restaurants in Vilnius, and the approximate price of a serving is 6-8 Lt (2-2,5 USD). 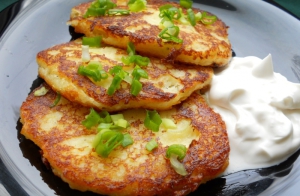 Fried pancakes made of mashed potatoes with pâté minced meat come from Žemaitija, a western region of Lithuania.

You don’t have to go to Telšiai, the capital of the region, to try this delicious and very hearty dish, because it is served in many establishments in other cities, in particular in Vilnius and Kaunas. The approximate cost is 15 litas ($15.5).

In fact, kibinai are the dish of the Karaites, but thanks to the fact that these people have long and firmly settled in the town of Trakai, these patties have become a Lithuanian national dish. They are made of unleavened dough with a variety of fillings:

The best kibinai in Lithuania can be tasted exactly in Trakai, where there are several Karaite restaurants.

In addition, this dish is served in Vilnius – for example, in a pastry shop called PinavijaCafé & Bakery. The cost per pie is 6 litas (just over $2). 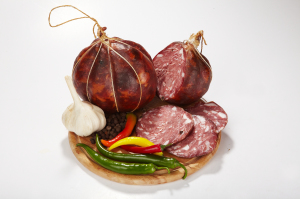 Skilandis is not just a dish, but part of Lithuanian culture. It is a kind of cold-smoked sausage made from pork stomach, which is stuffed with chopped or ground pork.

READ
10 places to visit with kids in Copenhagen, Denmark

In Lithuania this product is eaten on its own or added to borsches, soups, salads, etc. Skilandis are available in many restaurants or at any supermarket, priced at 35 litas per kilogram (approximately $12).

As you may have already understood, potatoes are the real queen of Lithuanian cuisine. Kugelis is a casserole, which is also prepared on the basis of this vegetable with the addition of lard (in the classic recipe – pig ears), sometimes – cottage cheese, chicken and other ingredients, and served with a sauce of cracklings and sour cream.

A serving of kugelis in Lithuanian restaurants costs about 11 litas ($4).

Morku apkess is worth a try for those who find Lithuanian cuisine a bit greasy and heavy. It’s a casserole made of cooked carrots that are mashed with yolks, cinnamon and sugar and then baked in the oven. 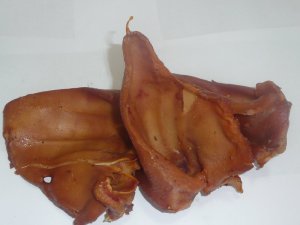 Pigs’ ears also play a very important role in the cuisine of this country. They are boiled, fried, smoked, and served both as a separate dish with various garnishes (most often with peas) and as an appetizer for beer.

For example, one of the most famous appetizers in Lithuanian restaurants is Klausuciu – cooked smoked pork ears with peas and garlic sauce.

Shakotis is as famous a Lithuanian dish as zeppelins. It is a very tasty cake that is made with eggs, sugar and flour over an open fire using a small skewer. Thanks to this method, chacotis look like a hedgehog or a Christmas tree.

It is most often made for weddings but tourists think of it as a kind of souvenir and it can be kept for about six months and contains no preservatives at all! You can buy shakotis at any pastry shop for around 32 litas ($11.50).

The most popular drink in Lithuania is beer, which is said to be equal in taste and quality to Czech or German beer.

The most famous Lithuanian beer is “Shvituris”, which has been brewed in Klaipeda since 1784.

Also, you should definitely try the old Lithuanian tincture called Suktinis, which is made with honey with the addition of different berries, including juniper, poplar buds, etc. But be careful – the strength of this drink leaves about 50 oh.

Well, those who do not drink alcoholic beverages, probably like rye kvass and various herbal teas, for which the Lithuanians are also considered to be great masters.