Dusseldorf is young, lively and multicultural . You’ll always find things to do or visit in this city: architecture, art, fashion, historic districts, restaurants, beer, nightlife… you won’t get bored! So here’s what to see and do in Düsseldorf.

The futuristic Rheinturm is the tallest building in Düsseldorf . Built in 1982, the tower quickly became one of the city’s main tourist attractions. From its 172 meter observation deck you can enjoy a breathtaking panoramic view of the Rhine shore and the nearby Old Town (Altstadt) .

High-speed elevators take visitors to the top of the tower, where there is also a revolving restaurant with a glass facade. The view outside is equally breathtaking, from the illuminated tower, known as the largest digital clock in the world. 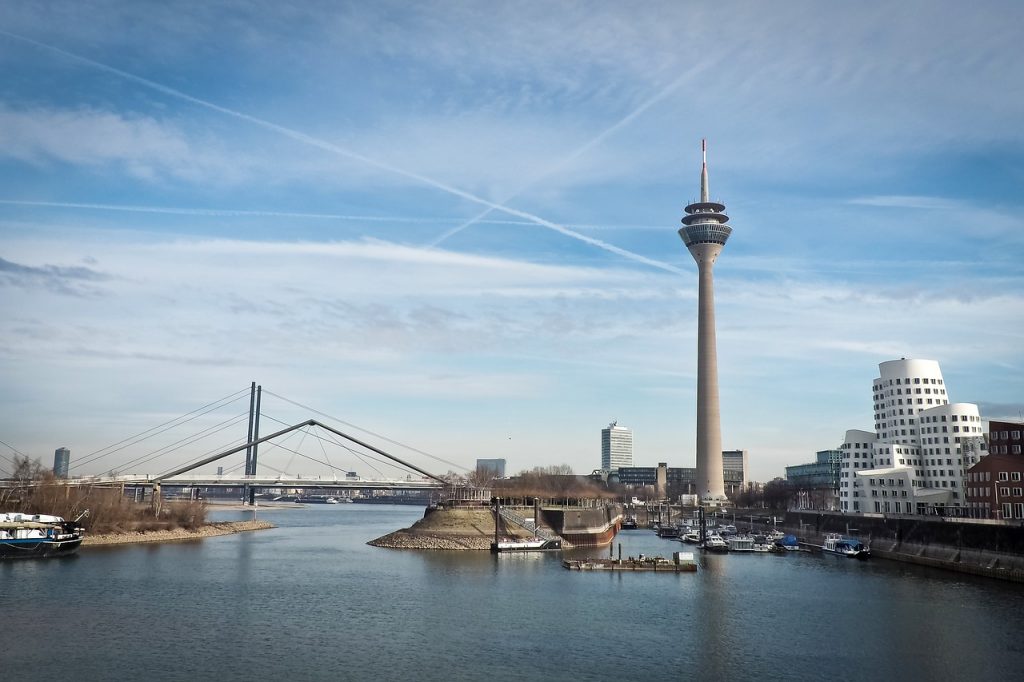 As mentioned before, the Old Town (Altstadt) stands on the banks of the Rhine and is the soul of Dusseldorf . Here you will be surrounded by bars and restaurants, and you will discover the “longest bar in the world”, a series of almost 300 bars following one another, where you can drink endless craft beers. 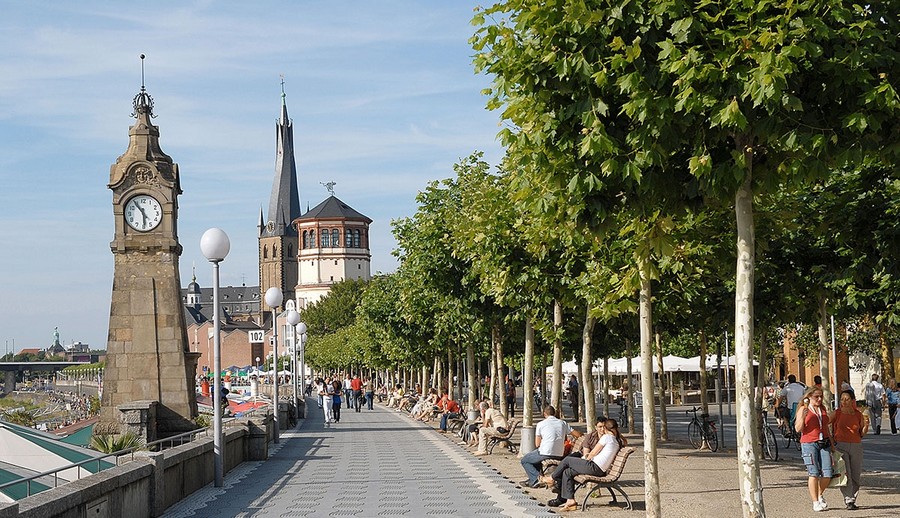 The Rathaus, or town hall, is one of the most beautiful buildings in Düsseldorf and also one of the oldest. The town hall, built in the 16th century, is one of the few buildings that remained intact after the bombing of World War II . The most memorable monument in the town hall is the bronze equestrian statue of Elector Jan Wellem, an iconic sculpture designed in 1711 by Gabriel de Gruppello, located at the front of the building.

Inside you can explore the ornate Council Hall, the Jan Wellem Hall and the Mayor’s Reception Hall, famous for their magnificent ceiling paintings by Domenico Zanetti and Johannes Spielberg. 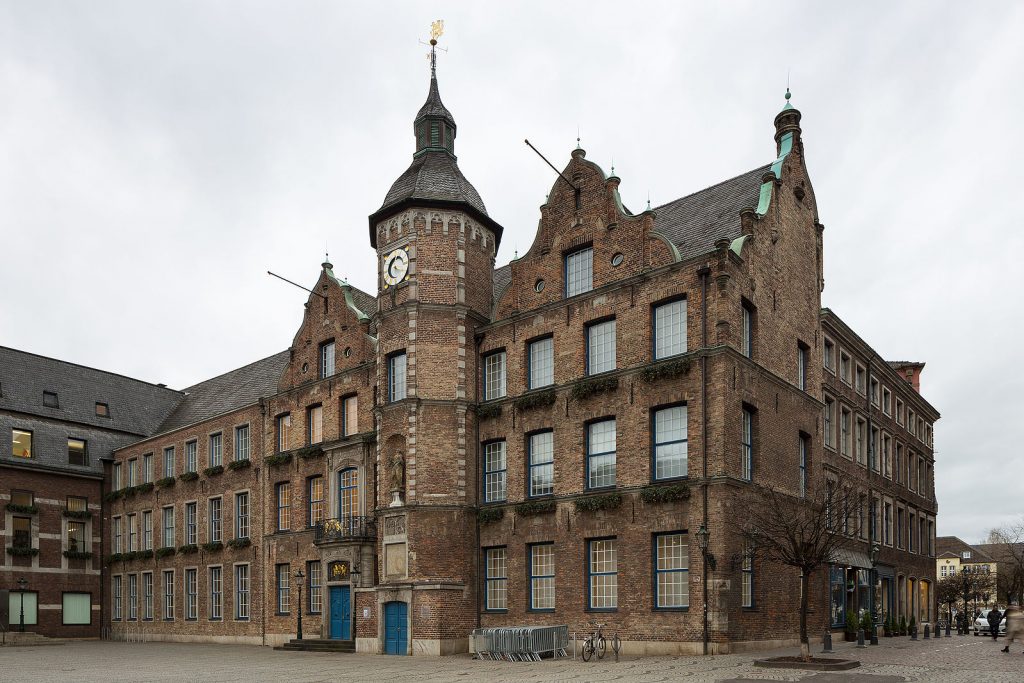 If you want to discover the history of Düsseldorf, Castle Benrath is the perfect place . Built between 1755 and 1770, the building is a former noble palace converted into a natural history museum, exhibition and concert hall. 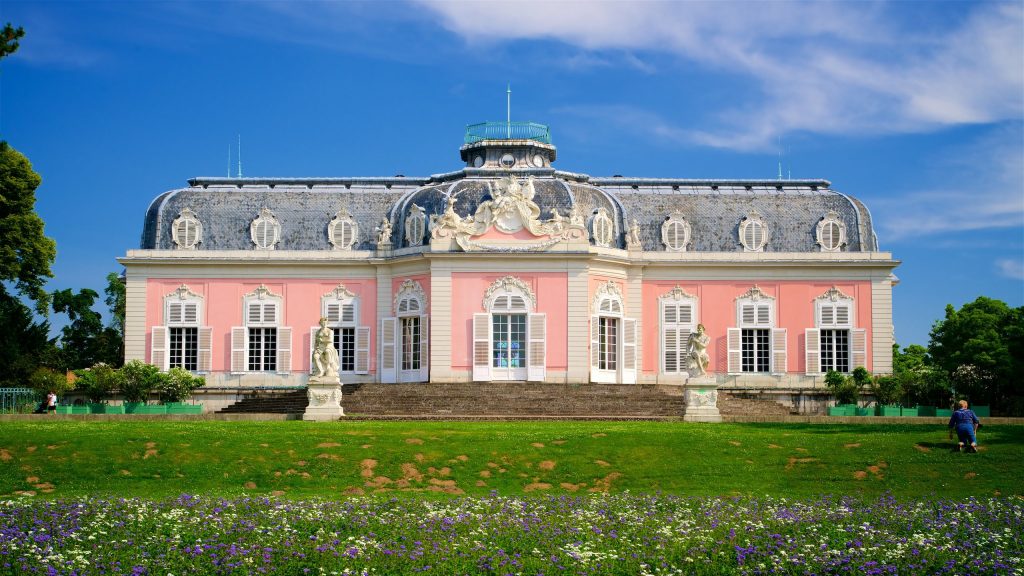 Royal Avenue (Konigsallee) is definitely one of Germany’s most beautiful avenues as well as a bustling shopping street in Düsseldorf. The famous shopping street, better known as “The Keu,” is a popular meeting place for locals and tourists alike, and features a wide variety of stores, restaurants, and bars to suit all tastes. In addition to an impressive array of designer boutiques and leading jewelers, K is home to the Sevens shopping center, the Kaufhof K department store, and a number of 5-star hotels. 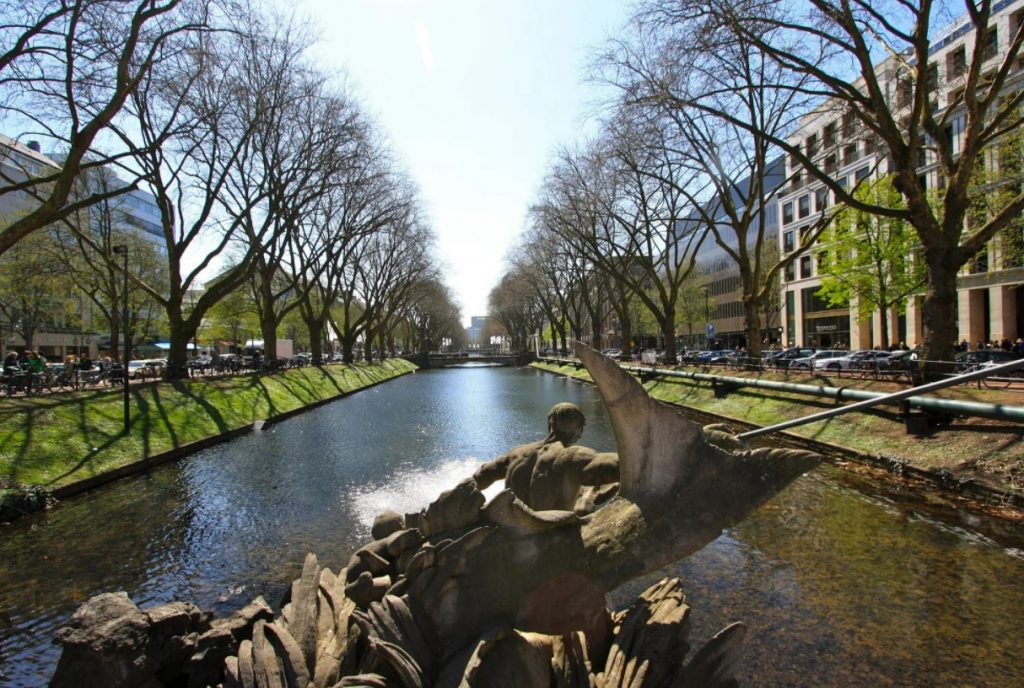 The Kunstpalast Museum, located on the banks of the Rhine, was opened in 1913 and was renovated by architect Oswald Matthias Ungers at the end of the last century. Inside you will find paintings by Renaissance and Baroque stars, such as Rubens’ famous Assumption of the Virgin Mary, and modern art from Expressionism to the present. The museum also has more than 70,000 works of graphic art, including sketches by Raphael and Kirchner. One of the Kunstpalast’s main attractions is the stunning Hentrich Glass Collection, which traces the history of European glass art. 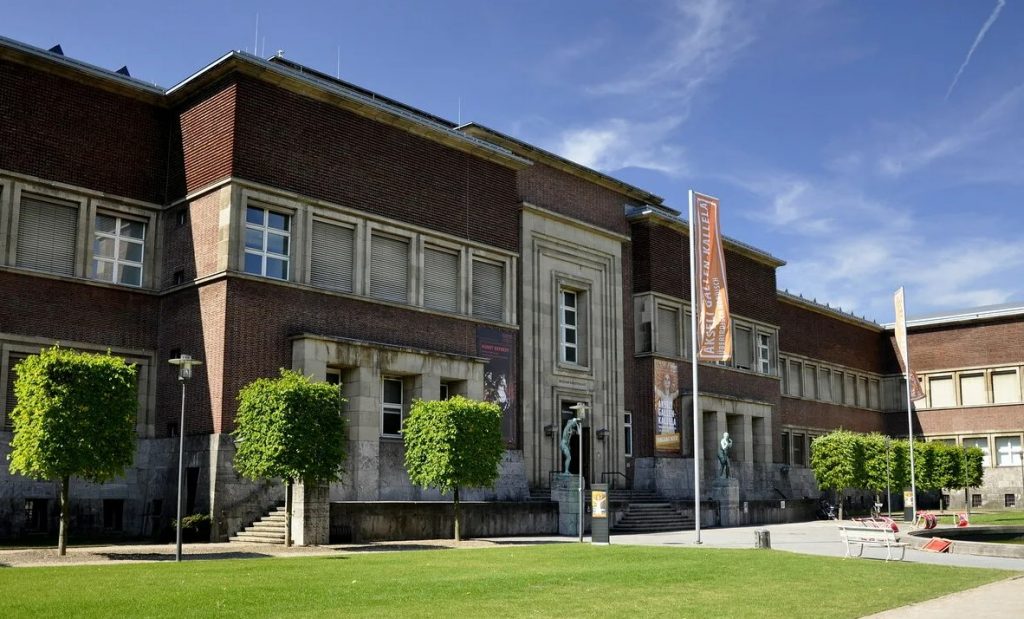 A stroll along the Rhine

With its two-level sidewalks, the Rheinuferpromenade not only gives a sense of peace and tranquility in relation to the bustling city center, but also connects many of Düsseldorf’s attractions such as the Old Town or the Rathaus. The promenade is not only popular with joggers, cyclists and skaters, but also hosts a series of seasonal events, including an open-air cinema, exhibitions and markets. 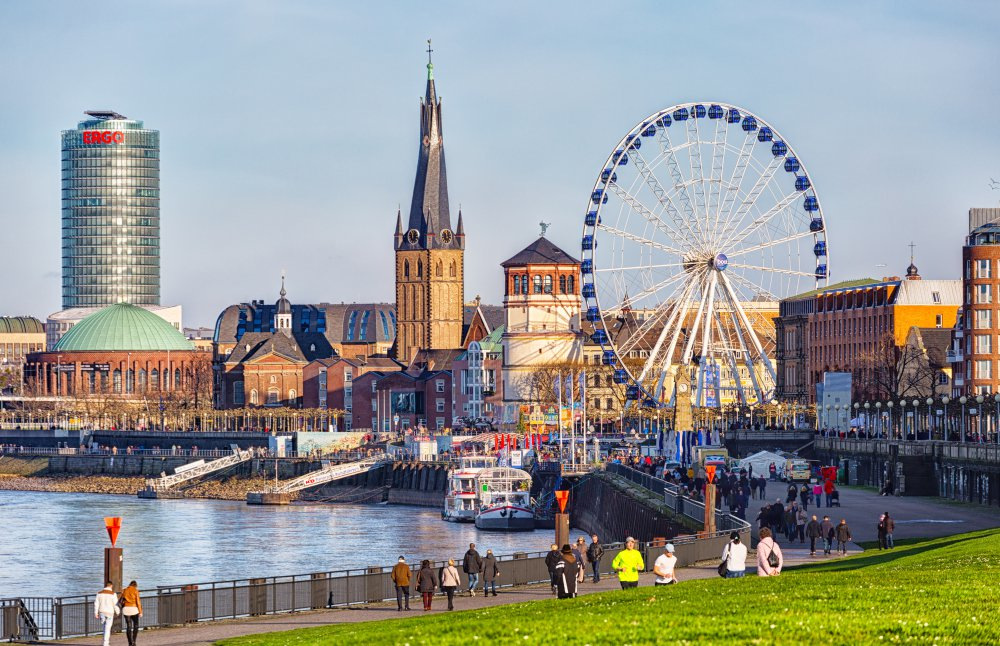 A stroll along the Rhine

Dusseldorf is the capital of Westphalia, located in central-west Germany. The city is crossed by the Rino River, where fishing was once practiced.

READ
Ecuador is a country with many facets. Why is it necessary to see Ecuador?

How to get to Dusseldorf?

Airplane : Dusseldorf International Airport (DUS), the third largest airport in Germany, offers numerous connections to major cities. From the airport you can reach the city by various means of transport such as metro, train or bus.

If you are looking for a hotel in Düsseldorf, we have selected 3 addresses for each price range .

HOTEL VILLA FALKENBERG *** : A comfortable, elegant and quiet hotel in the heart of a large park near the Rhine and the historic center of the picturesque Kaiserswerth district. Bright rooms and surroundings, friendly atmosphere. 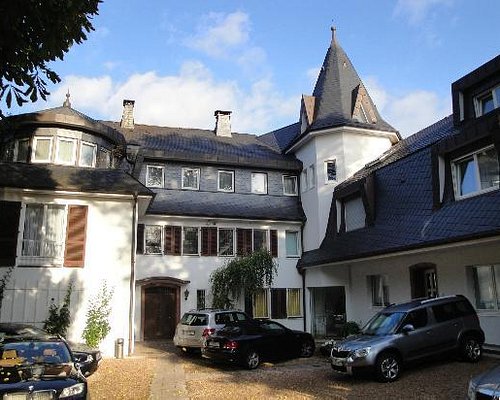 FAVOR HOTEL **** : in the heart of the city, near the Royal Walk and the Kö-Bogen, this 4-star hotel impresses with its privileged location and refined interior. The rooms are elegant and spacious, some with private terraces. 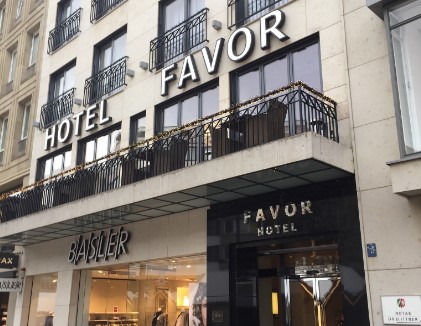 INTERCONTINENTAL DUSSELDORF ***** : a luxury hotel on the famous Königsallee that easily satisfies the needs of its guests. The exquisite rooms and suites are equipped with Wi-Fi, flat-screen TV, coffee maker, desk and marble bathroom with underfloor heating. On-site amenities include a restaurant, bar, day spa, sauna, steam room, gym and ballroom.

What to see in Dusseldorf in a day

A day in Düsseldorf can make memories for a year to come.

There are dozens of bars, unusual graffiti, and quaint buildings without a single flat wall. The main sights are concentrated on the east bank of the Rhine and are not far from each other – it doesn’t take long to walk around.

It’s common to fly to Dusseldorf for work or to stop for a day for a connection: there’s a major international airport here. The first time I was in the city was during a connection when I flew to Morocco.

If you don’t have much time for the city, take my itinerary for a walk. It starts at Kiefernstrasse and ends at the Rheinturm Tower. Along the way, see the Royal Alley, the Goethe Museum, the Museum Kunstpalast, St. Lambert’s Basilica, the Burgplatz and Marktplatz squares, the Film Museum, and the Mediahavn.

The U75 streetcar runs from the main train station to the start of the route – Kiefernstraße. The desired stop is called Kettwiger Straße. From there to the street – less than five minutes on foot.

Kiefernstrasse is a street with graffiti on every house. The most memorable drawings are a sitting boy the size of five stories and a giant red dragon. Not Drogon, but still beautiful.

Kiefernstrasse has an interesting history. In the early 2000s, the local authorities wanted to tear down the old buildings in the neighborhood: the street was abandoned and didn’t fit the image of a developing city. The residents realized that they would not be allowed to stay here and decided to act radically: they organized an international graffiti festival in the quarter. At their invitation, a group of talented artists came to Düsseldorf and transformed the street. Instead of demolishing the area, tourists now come to the Kiefernstrasse to look at graffiti.

New graffiti is being added all the time. I wanted to take pictures of every house: on Kiefernstrasse, I had the feeling that I was in a museum of gigantic paintings.

Locals say that Kiefernstrasse is not the safest street. I was there by myself during the day and felt comfortable. But I wouldn’t go there in the evening: apart from the beautiful houses, there’s nothing to see.

Every house is a work of modern art. The graffiti is not alike and unconnected

On the Royal Alley, or Königsallee, are the most expensive stores in the city. In the middle it is divided by a canal, along which grow beautiful sycamore trees. I usually drink coffee on the Royal Alley in a café with an open terrace. I like to look at the buildings, observe the people and the constant hustle and bustle on the street.

You can take the U75 streetcar from Kiefernstrasse to Königsallee. The stop you need is called Steinstraße.

READ
8 attractions for kids in and around Rimini, Italy

The Königsallee ends at the city’s oldest park, the Hofgarten. In the evening, people go there to take pictures of the illuminated main avenue that leads to the Goethe Museum.

The Goethe Museum is located in the building where the writer once lived. The “Faust” room displays excerpts and sketches of the work that Goethe wrote for 60 years. I like museums like this because, in addition to the exhibits, they accurately recreate the interiors and entire halls of the time.

The Kunstpalast Museum is one of the most popular and significant in the city. Under the same roof as paintings by Rubens, Michelangelo, and Raphael, works of modern art are exhibited. There are also frequently changing temporary exhibitions.

Average ticket to the Kunstpalast

The Basilica of St. Lambert was built in the 13th century. Its spire is slightly tilted, and this is not an artistic technique. The reason for the tilt was poor construction materials, but residents and visitors are more fond of the legend of the devil. It is believed that he wanted to rip the church out of the ground, but could only bend the spire.

I love churches and temples, especially those with few people. Perhaps I was lucky, but St. Lambert’s Basilica wasn’t crowded. There I was struck by the vibrant altar area and pulpit. They stand out strongly against the ascetic gray walls: it seems as if they were taken from another church.