Coconut Islands (Keeling) is a group of 27 small coral islands located in the Indian Ocean. Outer Australia. Area – 14 sq. km. Population – 607 people [1] . (July, 2007), about 80% of them are Malay. The administrative center – West Island is located on the West Island. The official language is English. Virtually the entire population professes Islam.

The islands were discovered by English captain William Keeling in 1609.

On December 6, 1825, a British captain, John Clunys-Ross, visited the islands. On February 27, 1827, he founded a settlement on the South Island, and in 1831 – took possession of all the islands, declaring them feudal possession of the family of Cluney-Ross. Annexed by Great Britain in 1857 and placed under the administration of the Governor of Ceylon in 1878. Since July 7, 1886, granted by Queen Victoria to the Clunys-Ross family in perpetuity. In 1886 were included in the colony of Stretes Settlements, to which was subsequently annexed also Christmas Island. Subordination to the Straits Settlements was formal, in fact, the Kliunis-Rosses governed the islands at their own discretion and even issued their own currency, the Cocos rupiah, from 1887 to 1978.

On November 9, 1914, during World War I, a battle between the Australian cruiser Sidney and the German raider cruiser Emden took place near the islands, which resulted in the German cruiser being badly damaged and stranded on the rocks. Part of the German crew fled through the Cocos Islands and returned to Germany.

Effective November 23, 1955, she was placed under Australian administration. On September 1, 1978, the Australian government bought almost all of the land from a descendant of Kluniz-Ross; the remainder was purchased in 1986. On April 6, 1984, a referendum on self-determination for the islands was held. A majority voted in favor of remaining connected to Australia [2] . 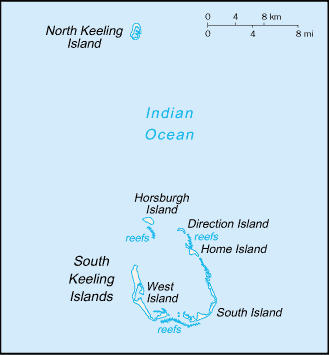 The archipelago is of coral origin. It consists of the southern part and the only uninhabited island, North Keeling, located 25 km to the north. The highest elevation is 5 m above sea level. The total area is 14 km².

Climate is humid tropical, cyclone season is from October till April.

Fresh water resources are scarce, and rainwater is collected in natural underground reservoirs.

The area of North Kiling is about 1.2 km², the lagoon is about 0.5 km². The atoll almost completely encloses the lagoon from the ocean.

READ
The Korea we deserve, or debunking myths about the country of morning freshness

The islands of South Kiling make up 24 tiny islets, of which only two are permanently inhabited – West and Home. The total area of South Keeling Islands is 13.1 km².

The largest of the islands, the Western Island, has an airport (serves the Australia-Europe highway) and is home to most of the population. The main occupation of the population is airport maintenance, coconut cultivation and copra production. Recently developed tourism [3] .

The postal operator on the islands is the Australian state corporation Australia Post. Its postage stamps issued for the archipelago since 1994 can also be used in Australia, just as Australian stamps can be used in the Cocos Islands.

See what “Cocos Islands” is in other dictionaries:

Cocos Islands – Keeling, a group of islands in the eastern Indian Ocean; territory of Australia. Discovered in 1609 by the English navigator William Keeling (? 1620) and called by his name. Later the name Cocos Islands was spread,… Encyclopaedia of Geography

COCOS ISLANDS (Cocos Island, Keeling), an Australian possession in the Indian Ocean, 2768 km northwest of the Australian city of Perth. Since 1992, it is a constituent entity of the state of Western Australia. The total area of the Cocos Islands is 14.2 km2. The largest islands are West and Home. The most distinct … …. encyclopedic dictionary

Cocos Islands – Keeling, a group of islands in the eastern part of the Indian Ocean; territory of Australia. Discovered in 1609 by the English navigator William Keeling (? 1620) and called by his name. Later the name Cocos Islands was spread,…

Cocos Islands (Cocos Islands) Keeling, a group of 27 small coral islands in the Indian Ocean (12°05 south latitude and 96°53 east longitude). It belongs to the Commonwealth of Australia. Area: about 14 km2. Population 622 (1968). Groves ………The Great Soviet Encyclopedia

Cocos Islands is a small island archipelago located in the northeastern Indian Ocean, about 2,100 kilometers northwest of Australia. The archipelago received its name because of the large number of coconut palms that grow on all the islands. The second name, Keeling, was given to the archipelago in honor of the discoverer. The islands that make up the archipelago, of coral origin, are conditionally divided into two groups: the southern and separately uninhabited North Keeling Island. The southern group consists of 26 islands of various sizes, among which the largest are West Island (West Island), Horsburgh, Direktion (Direction), Home, South Keeling and South Island (South Island). The total land area of the islands does not exceed 14 km².

The administrative center of Cocos Islands is a small village of West Island, located on the island of the same name and inhabited by 150 people. Also of note is the village of Bantam Village on Home Island.

Save on a trip to the Cocos Islands!

The climate on Cocos Islands is tropical humid. There are no significant temperature fluctuations depending on the time of year here. The average temperature is kept at about +26-28 degrees. It is not hot, thanks to the humid winds that bring heavy rains for short periods of time. Cyclones are very likely between the beginning of October and the end of April and they can bring light showers from time to time.

Flora and fauna on the islands are represented by quite rare and endemic species. For lovers of wildlife it is a must to visit Pulu National Park, which was established by law in 1995 and covers the conservation area of North Killing Island, a total area of 1200 square meters with a small, but well protected from the sea surf, lagoon. Of the emdemics found here, Gallirallus philippensis andrewsi should be noted, as well as a large number of seabirds. The island is also home to a huge number of sea turtles.

Cocos Islands were discovered in 1609 by Captain William Killing on his third voyage on board the Red Dragon returning from Java (the Greater Sunda Archipelago). In late 1825, the Cocos Islands were visited by the British captain John Clunys-Ross, who in early 1827 established a small settlement on the South Island. In 1831 he fully took over the islands, declaring them a feudal possession of the Cluniz-Ross dynasty. In 1857, legally the islands came under the authority of the British Crown, which transferred them in 1878 under the administration of the governorship centered on the island of Ceylon (Sri Lanka). In the middle of 1886, they were handed over by the British monarch to the Cluny-Ross dynasty for feudal administration. On November 9, 1914, an artillery duel between the Australian cruiser “Sydney” and the German cruiser “Emden” took place near the Cocos Islands. After sustaining severe damage, the German cruiser washed up on the reefs.

After the Australian government purchased the ownership of the islands from the Clunys-Ross dynasty, the Cocos Islands (Keeling) became part of the Australian Outer Territories and were administered as a separate government department. The islands have this status to this day.

The total population of the two inhabited islands (Home and West Island) of the archipelago does not exceed 600 people. Ethnically, the population is 90% Malay, with the remainder coming from Europe and Australia. English is the official language.

The main occupation of the locals is the production of copra, maintenance of the airport and tourist arrivals to the islands, which recently have been especially numerous.

Naturally, there are no seaports on the islands that can accommodate cruise ships, in addition, the coral reef, which in some places is quite massive, interferes with navigation in the area. Therefore, tourists arrive to the Cocos Islands, as a rule, on their own yachts and small passenger ships. Yachts can moor ashore almost everywhere, but it is best to do it in the inner bay formed by the line of the southern group of islands. You can also reach the islands by air. On West Island, not far from the administrative center, there is a small airfield built during World War II, proudly called the Cocos Islands Archipelago International Airport. The airport has the status of an international airport due to the fact that it receives flights from Indonesia. In spite of its shabby appearance, the airport is able to handle aircraft of all types and its passenger turnover is about five thousand passengers per year.

There are five small hotel complexes on the islands, which include one-story buildings in the form of huts and bungalows. Service in them is not very good, but the living conditions are quite bearable for such a remote from civilization islands.

Tourists who prefer beach holidays, come to the islands with only one purpose – to get away from civilization. The beaches here are not equipped and do not have the infrastructure, as in the recognized resort centers, but their value lies in this. It is here you can spend a pleasant time sunbathing on the white-pink sand and swimming in the clearest emerald-colored coastal waters. Visitors tend to prefer the beaches of Home Island, but there are just as many traditionally in the vicinity of West Island.

The proximity of the massive coral reef and the abundance of forms of flora and fauna in the coastal waters attracts fans of diving and especially snorkeling here. The coral reef near the Cocos Islands takes fabulous forms, characteristic only of the area. In the thickets of the coral forest inhabited by myriads of tropical fish, an unusually bright coloring. At the same time, when diving on the bottom, remember that the danger here should be expected from the moray eels and coral snakes, unusually poisonous in the summer. In the area of North Keeling Island on the battle site of the “Sydney” with the “Emden” on the seabed, despite the fact that the latter has long been dismantled for metal, divers from around the world find objects and structural elements of the German cruiser.

At the service of lovers of active recreation local residents can offer fishing, both underwater and above-water, providing their unpretentious fishing gear. Another attraction for tourists is the so-called canoe safari.

The unit of currency in circulation in the Cocos (Keeling) Islands is the Australian dollar, (AUD, code 36), consisting of 100 cents.