Cidade Velha (Portuguese for “old town”, also: Santiago de Cabo Verde ) is a town[2] in the southern part of the island of Santiago, Cabo Verde . Founded in 1462[3] : 77 it is the oldest settlement in Cape Verde and its former capital. Once called Ribeira Grande , its name was changed to Cidade Velha in the late 18th century. [4] It is the seat of the municipality of Ribeira Grande de Santiago .

This city, situated off the northwest coast of Africa, was the first European colonial settlement in the tropics. Some of the site’s carefully planned original design elements still survive, including a royal fortress, two churches, and a 16th-century town square. Today, Cidade Velha is a transport stop on the Atlantic Ocean and a center of Creole culture. The city became a UNESCO World Heritage Site and one of the seven wonders of Portuguese origin in the world in 2009 [4].

Cidade Velha is located on the southern coast of Santiago, at the mouth of the Ribeira Grande de Santiago . It is 10 km (6 miles) west of the capital Praia . Subdivisions of the city include Largo Pelourinho , San Sebastian , Santo Antonio and San Pedro . The island of Santiago was discovered by Antonio da Noli , a Genoese in Portuguese service, in 1460 [3] : 73 Da Noli settled in Ribeira Grande with members of his family and Portuguese from the Algarve and Alentejo in 1462 [3] : 77 The settlement conditions were good because of the abundant water from the Ribeira Grande, which gave it an advantage over another settlement on Santiago, Alcatraces . [3] : 80 The settlement became a key port for the Portuguese colonization of Africa and South America. In the 16th and 17th centuries it was the center of maritime trade between Africa, the Cape Sea, Brazil, and the Caribbean Sea . Because of its proximity to the African coast it was an important platform for the enslaved trade. [4]

The port of Cidade Velha was the stopping place of two great navigators, Vasco da Gama in 1497 on his way to India and Christopher Columbus in 1498 on his third voyage to the Americas. In 1522, it was a stopover for the later explorer Ferdinand Magellan, who served under Spanish rule while traveling the world.

Cidade Velha has the oldest colonial church in the world, the Church of Nossa Senhora do Rosario, which was built in 1495. In 1533, Cidade Velha became the seat of the new Roman Catholic diocese of Santiago de Cabo Verde, created by the papal bull of Pope Clement. VII . The office is now located in Praia.

The wealth of Ribeira Grande and conflicts between Portugal and the rival colonial powers, France and Great Britain, attracted pirate attacks, including Francis Drake ( 1585) and Jacques Cassar ( 1712). [3] : 195 Despite the construction of Forte Real de San Filipe in 1587-1593, Ribeira Grande remained vulnerable and fell into decay. The capital was moved to Praia in 1770. [5]

Ribeira Grandi (now Cidade Velha) was downgraded to a village, and its civil, religious, and military buildings fell into disrepair. Since the 1960s, restoration work began. [6] : 70 In 2009 it became a UNESCO “s World Heritage Site . [4]

READ
10 popular places to go on a honeymoon trip

Cidade de Velha, which originated as the city of Ribeira Grande, was founded in 1462 , two years after Portuguese navigators arrived on the island of Santiago, the first of the discovered islands of the Cape Verde archipelago. The town of Ribeira Grande, renamed Cidade Velha at the end of the 18th century.

It was the first city founded by Europeans south of the Sahara and the first capital of Cape Verde, as well as the site of the first diocese of the West African coast, which King John III requested from Pope Clement VII in 1532.

The archipelago’s location was of great strategic importance as an indispensable staging post on the maritime routes to the Americas and South Africa, affording water and fresh supplies as well as the possibility of repairing naval vessels. 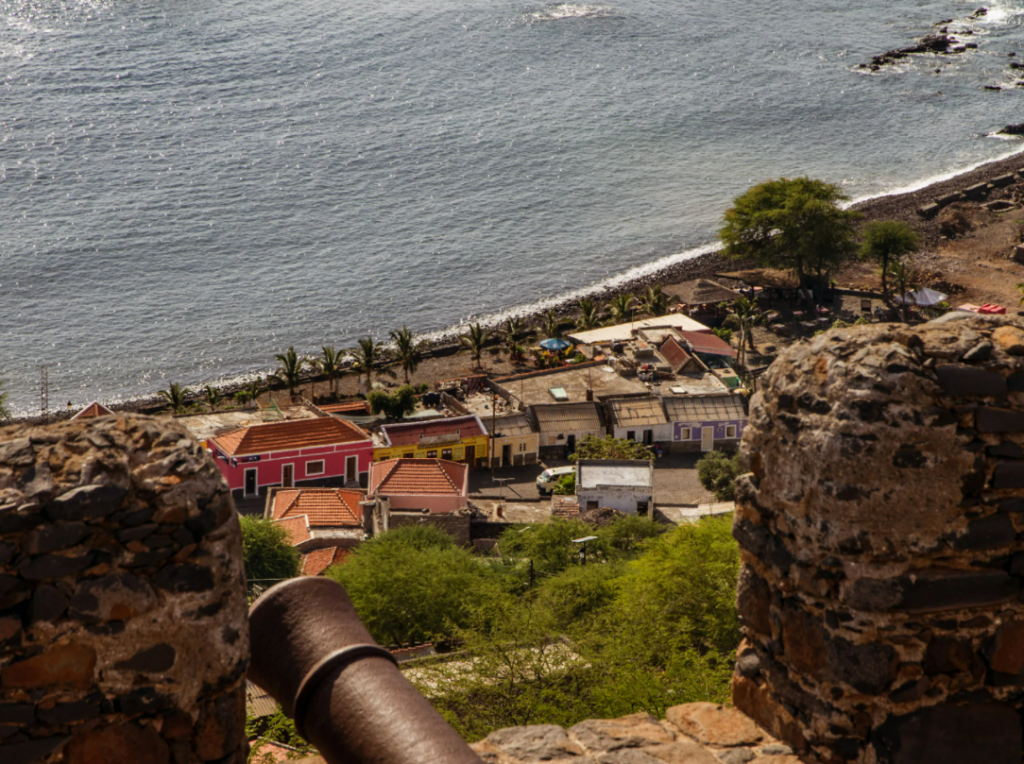 It also served as a valuable laboratory where European and African species of crops and animals were bred and tested that had been brought to the American continent, as well as other species from Africa and Europe.

The position of the city, on the other hand, was due to natural conditions that were more favorable for human settlement.

In its most inhospitable part, where the island is shaped like a platform reaching the sea at a height of 100 meters, there is a very deep and steep valley of great scenic beauty, where a stream called Ribeira Grande, accompanied by lush vegetation, flows almost all year round.

READ
University City Oxford: Where to walk, what to see

The abundance of water and the possibilities for farming were decisive factors in choosing this place as the center of settlement. 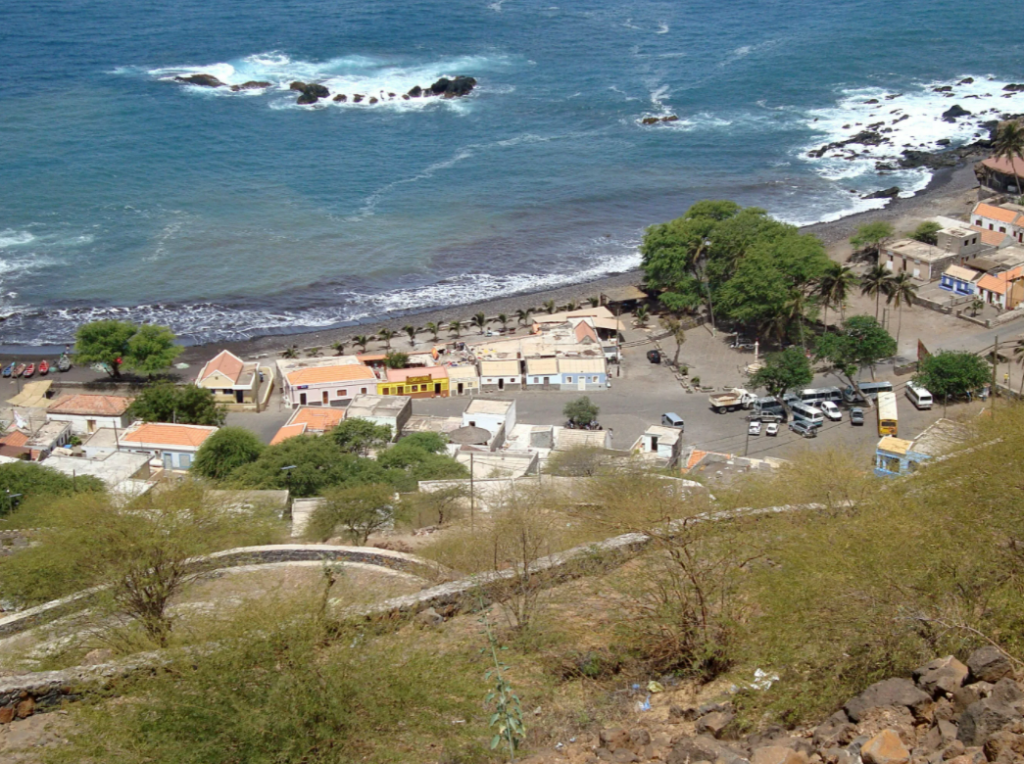 Cidade de Vella is located at the mouth of this river and the distribution of its buildings made clever use of the rugged terrain, organizing the settlement as an amphitheatre facing the sea.

The complex is crowned by the fortress of San Felipe, which is 100 meters above the town. Its construction in 1587 was decided after the attacks on the town in 1578 and 1585 by Sir Francis Drake, the famous English privateer. 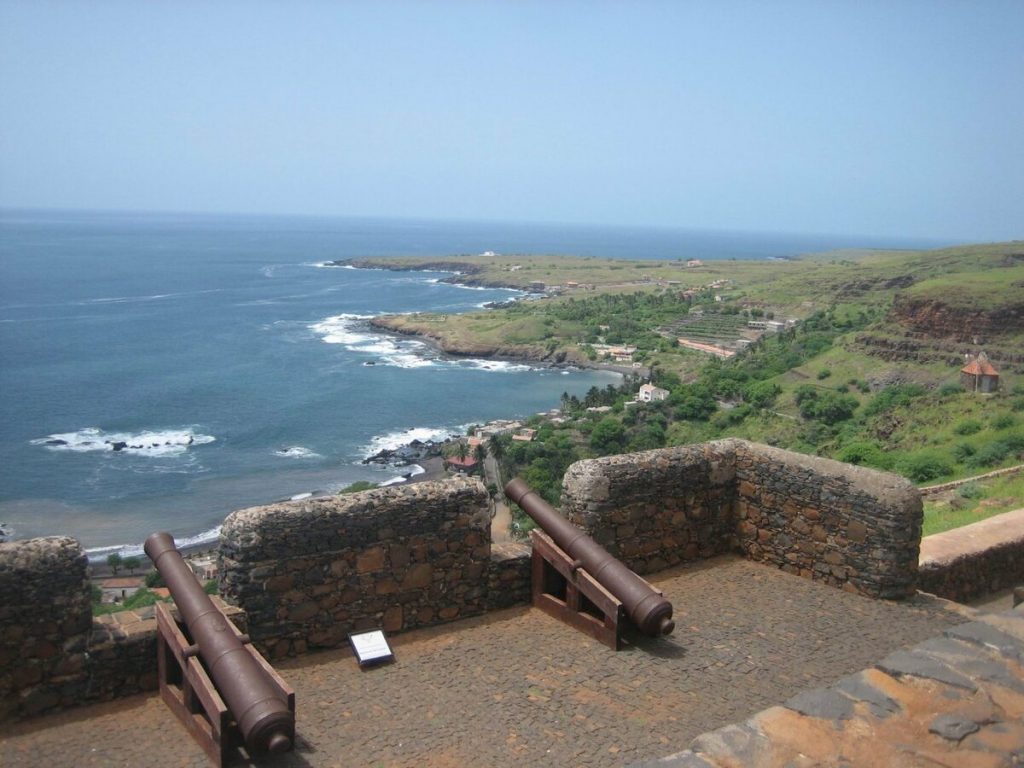 The city’s period of great grandeur lasted from the mid-15th century to the end of the 16th century, retaining some importance in the early 17th century, and was mainly due to the slave trade.

By the middle of the 16th century the town consisted of about 500 buildings of stone and lime and had an extensive complex of religious buildings: the Church of S. Roque, now a mutilated building, and the disappeared churches of S. Pedro, Monte Alverne. Also, except for part of the bell tower, the church of Misericórdia and the hospital have disappeared, and a little further inland were the hospice and the houses of the Society of Jesus.

READ
Traveling around Iceland: What to see and visit

Around the middle of the 17th century, the monastery of S. Francisco was founded on the hillside, from whose ruins the restored church stands out.

In the fortress was the small chapel of San Gonzalo, and next to the cathedral was the Episcopal Palace. 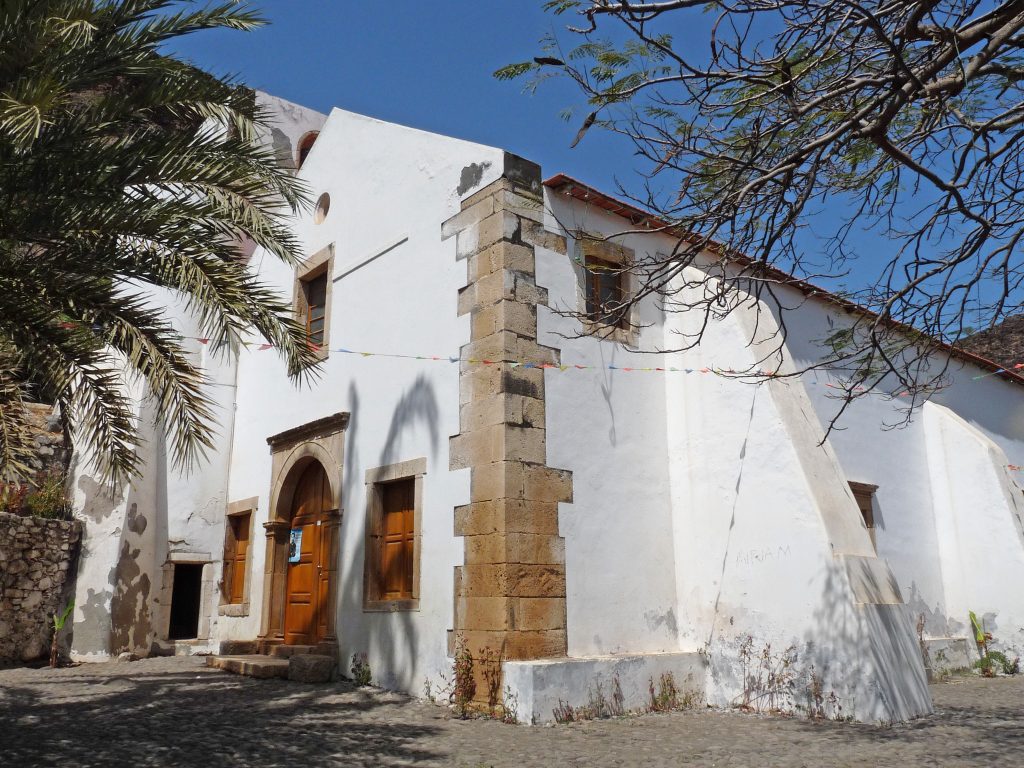 But it was the cathedral that really stood out because of its unexpected size. Located in the Sebastian district, 25 meters above the sea, it towered over the city and dominated it with its powerful presence.

Its construction began in 1556 at the initiative of D. Frei Francisco da Cruz, third bishop of Cape Verde, but was interrupted when the walls were half erected, and only more than a century later, under Bishop Frei Vitoriano Portuense, work began again and was finished around 1700, but already at the apparent loss of the importance of Ribeira Grande.

In fact, the better conditions of the port town of Praia de Saint Maria, located 12 kilometers away, together with the instability of the Cidade Velha, feared, and mainly due to the presence of stagnant water at the end of the river, led to the growing loss of its importance during the 17th century, and it entered the next century already completely ruined.

On the other hand, the defensive system against those who attacked by sea was never sufficiently garrisoned in men and firearms, and was not particularly effective against those who landed elsewhere on the island and attacked by land, as was confirmed by the several attacks to which the city was subjected, especially the most devastating of all, which occurred in 1712 under the command of the Frenchman Jacques Cassar . 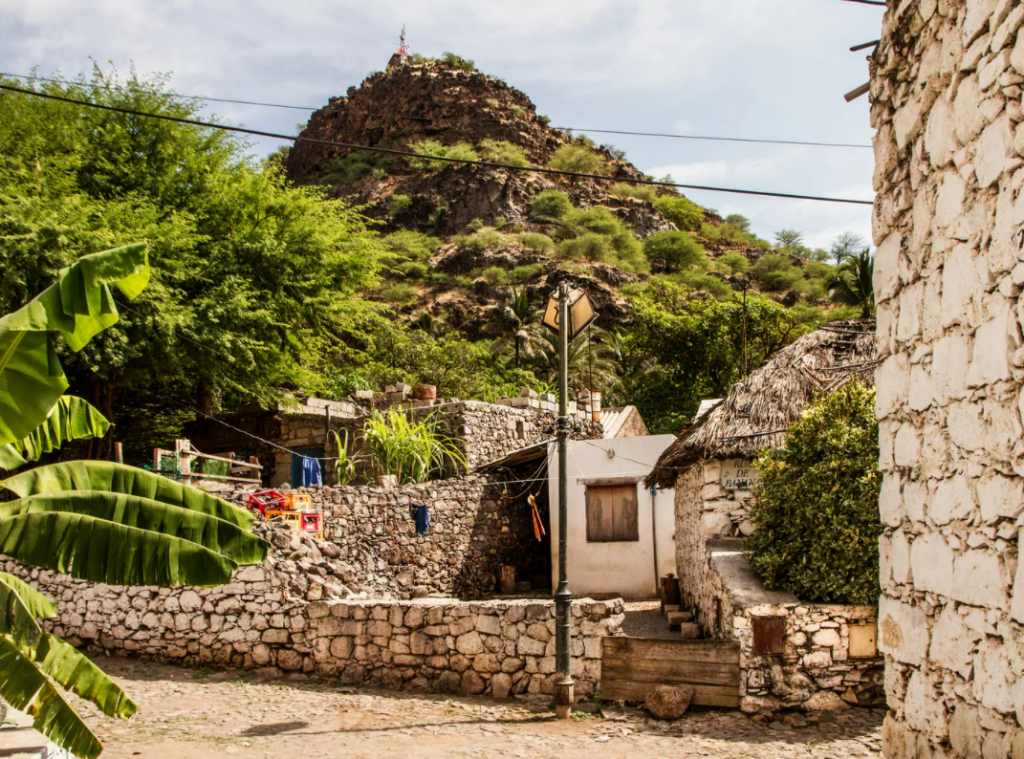 With less and less economic importance, in 1769 it lost its status as capital in favor of the city of Praia. Since then, having lost its administrative importance, the city was gradually abandoned, military and religious institutions were destroyed during the nineteenth century, most of them were destroyed in the next century (except for the church of Nossa Senhora do Rosario), and the civilian buildings disappeared completely.

Then it was reoccupied by people who came from the interior of the island. Thus was born Cidade Velha, where simple dwellings were built on the foundations of disappeared buildings, built in stone and covered with cocoanut leaves, with great use of masonry gathered from the rubble of monuments.

Ribeira Grande is directly related to the material manifestation of the history of enslavement and trade of the African peoples, as well as its significant cultural and economic consequences. Ribeira Grande was the cradle of the first full-fledged mixed Creole society. Creole culture then spread across the Atlantic, adapting to the various colonial conditions of the Caribbean and the Americas. Its forms touched many areas, including the arts, social customs, beliefs, pharmacopoeia, and cooking techniques. Ribeira Grande is an important initial link in an intangible heritage common to Africa, the Americas and Europe. 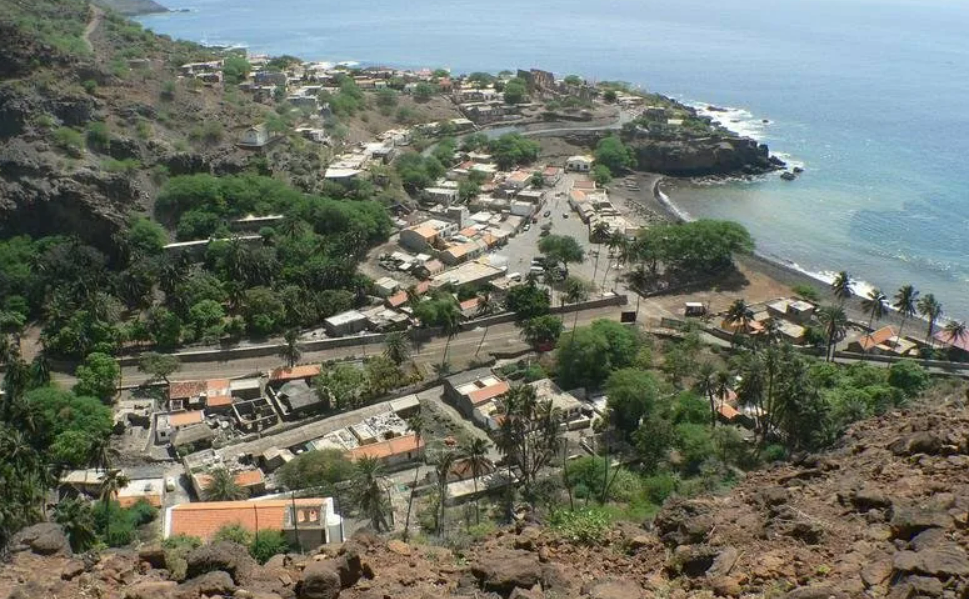