Château Cheverny: The most well proportioned château in all of France

The Château of Cheverny is in the Loire Valley. The area was once very popular with the French nobility. Many magnificent castles and palaces have been erected here. Although today Cheverny is hardly a castle – it’s more of a luxury palace, the site was once a veritable martial castle. The fortress walls were dominated by towers with loopholes, and an elevating bridge was built over the deep water moat.

Once upon a time, in the late 15th century, these lands were donated by the king to the Jurault family, the Counts of Cheverny. They built a mighty castle here, which, however, was never attacked. In the mid-16th century, the Counts of Cheverny fell into disgrace. Their lands and property were confiscated to the state. And the castle the king gave his favorite Diana de Poitiers. But she did not appreciate the gift, because, in her opinion, the castle did not quite match her beauty and position. She settled in the castle of Chenonceau and sold Cheverny to one of the heirs of the Hurault family. The new owner of the château became Heinrich Hurault. Thus, for only a short period of time, Cheverny did not belong to the Count’s family. 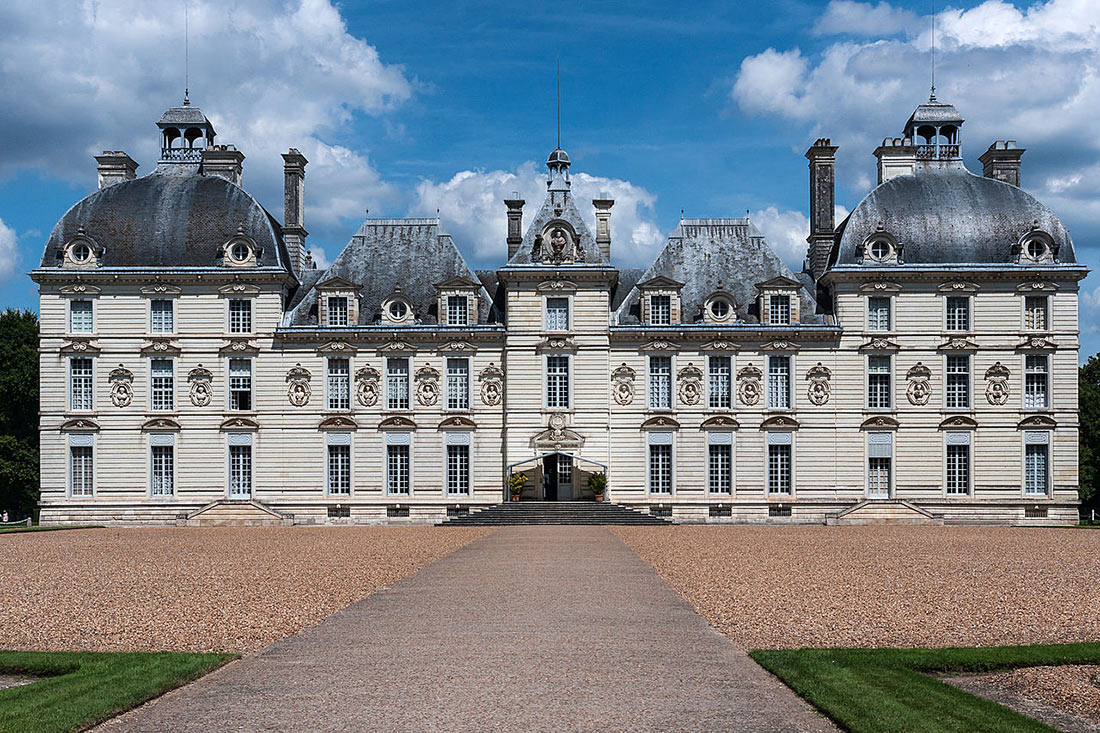 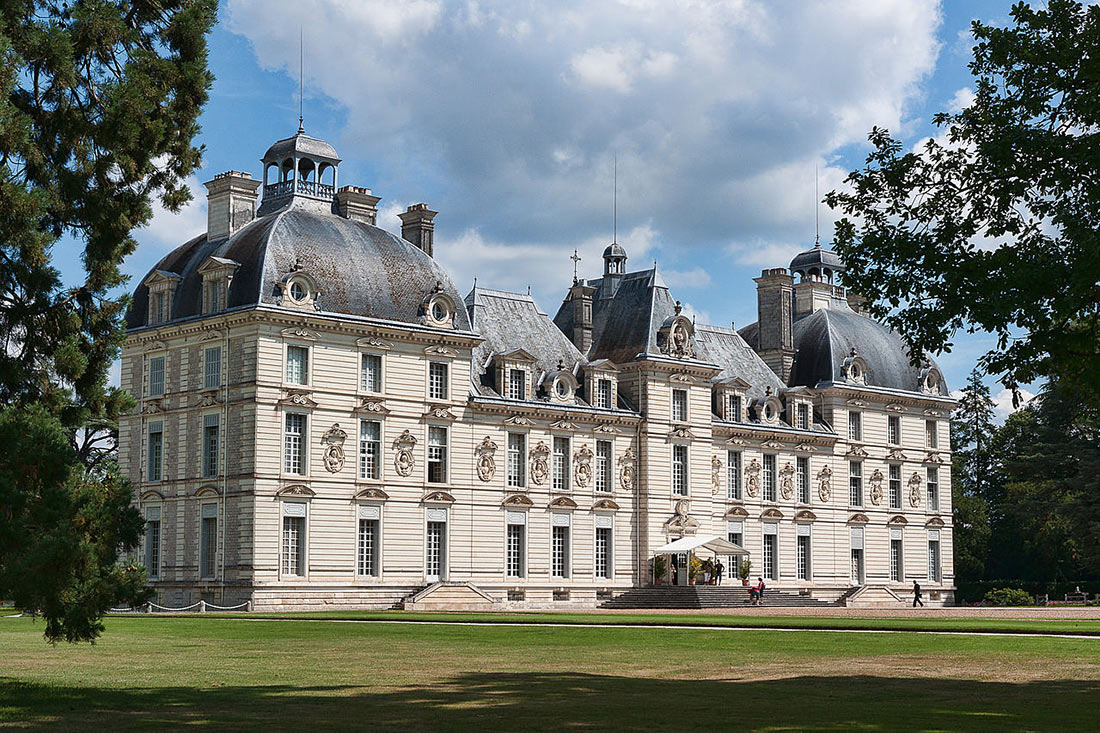 Heinrich decided to change everything fundamentally. The fortified castle was completely demolished and a luxurious palace grew in its place. It was built of white sandstone, and this stone has amazing properties. Not only does it not deteriorate over time, but it becomes stronger, so its whiteness not only dulls, but also becomes even more dazzling. Because of this, the facade of the palace has not been repaired for several centuries – since 1634. 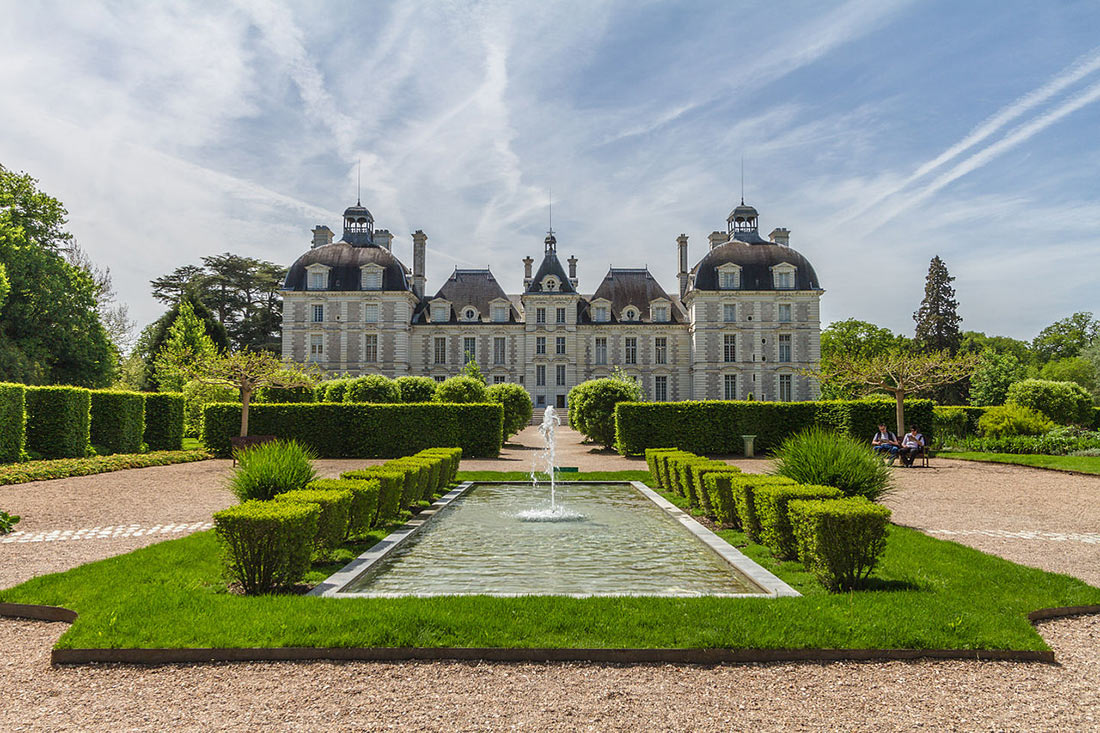 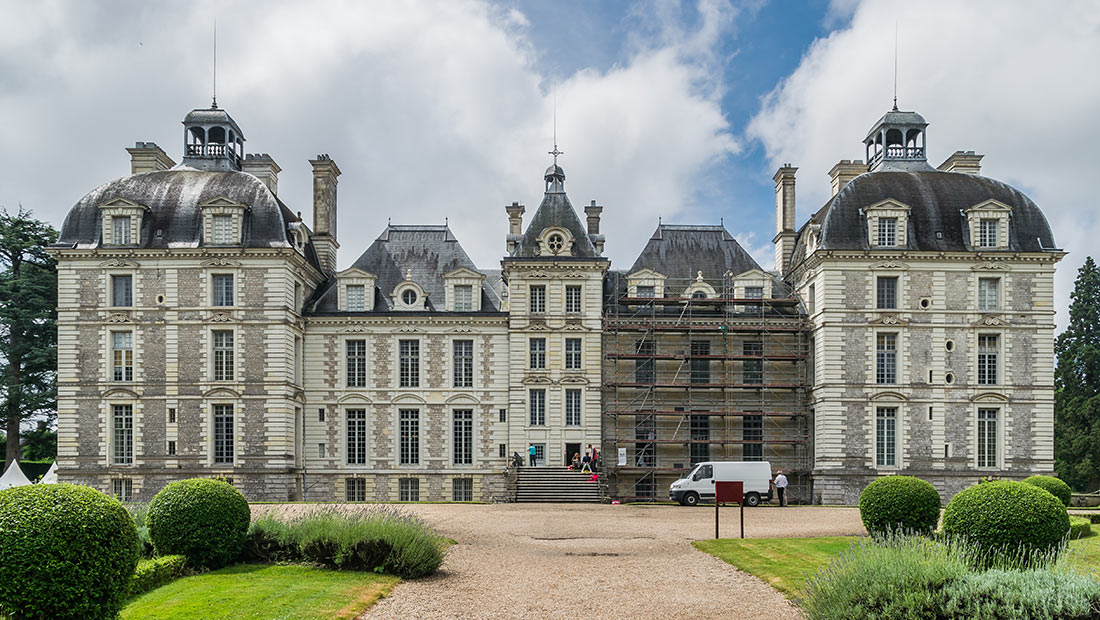 The palace is magnificent not only from the outside: its interiors are stunning. Thanks to the fact that the owners of the palace have never changed, everything in the palace is in harmony. Antique furniture, tapestries, paintings, all sorts of decorations complement each other, creating a unified style. 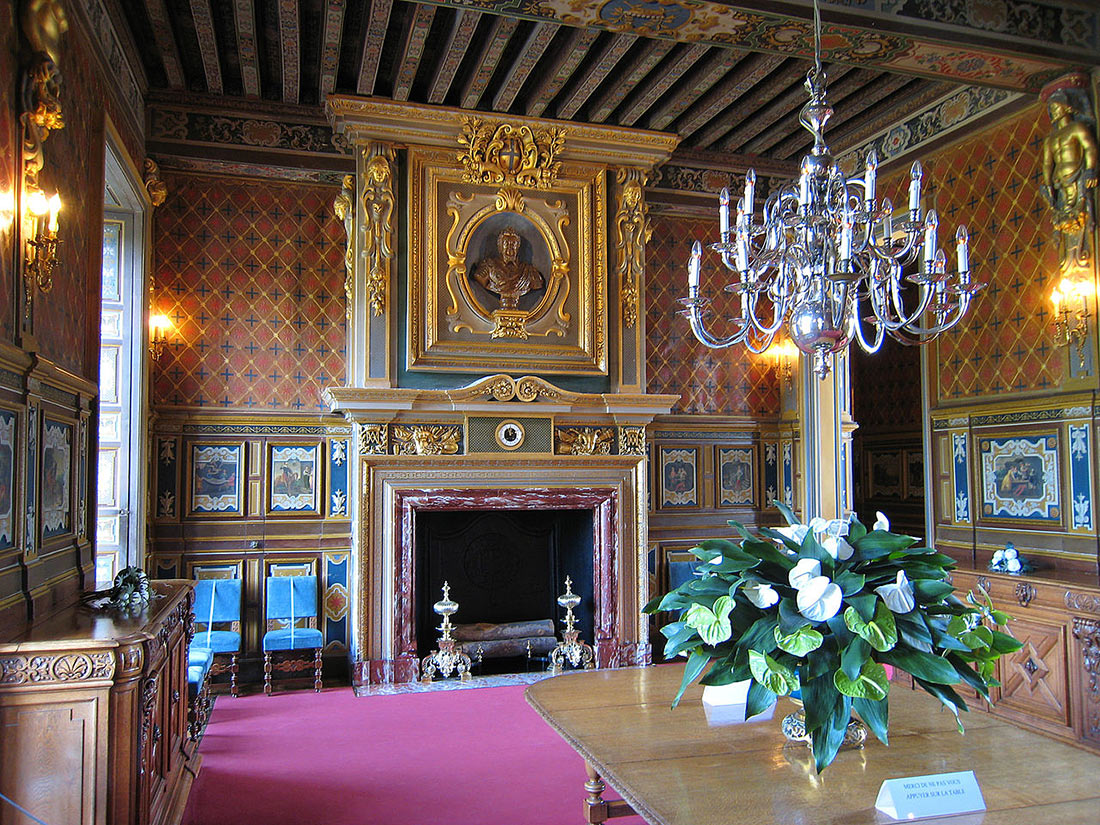 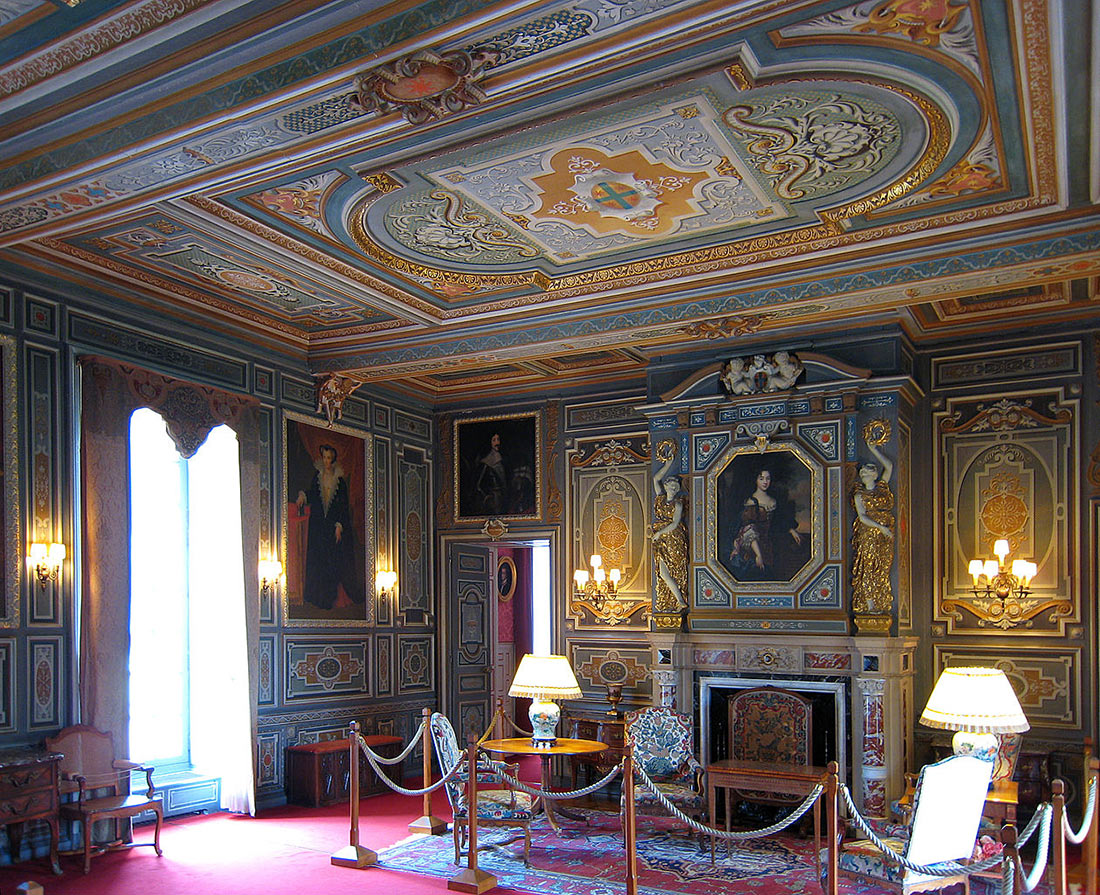 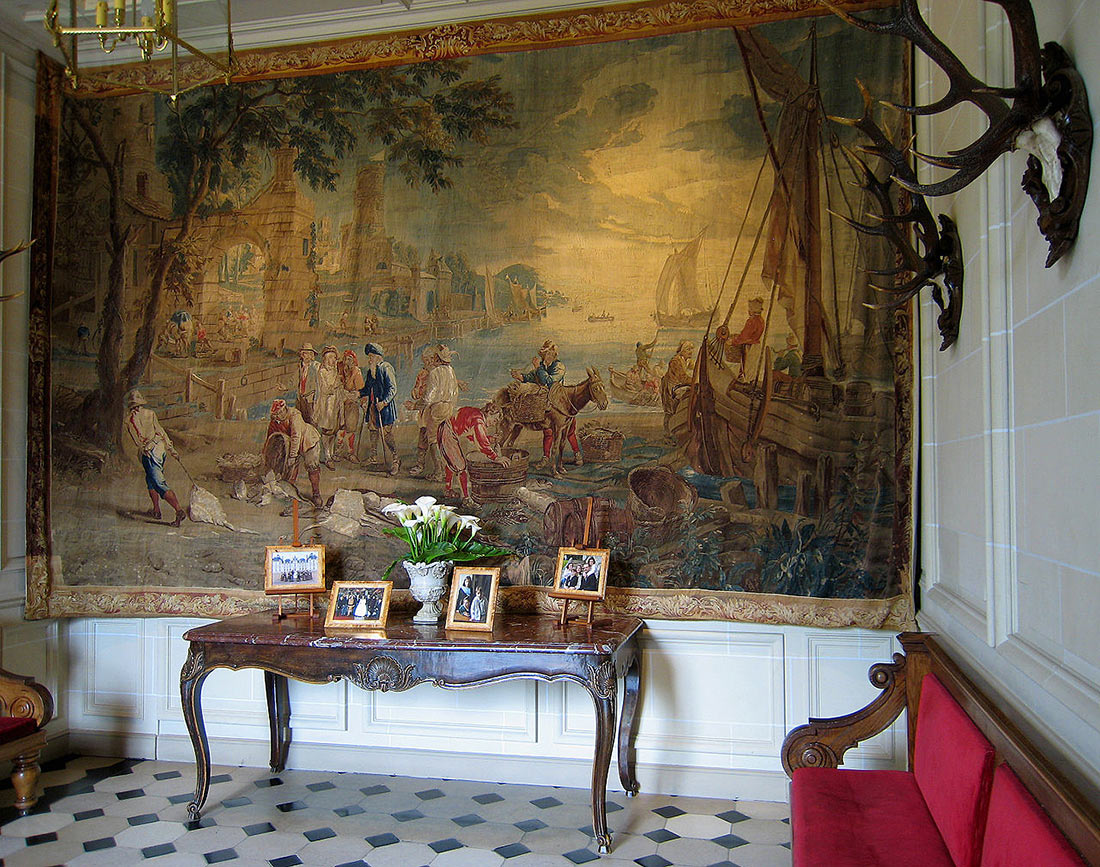 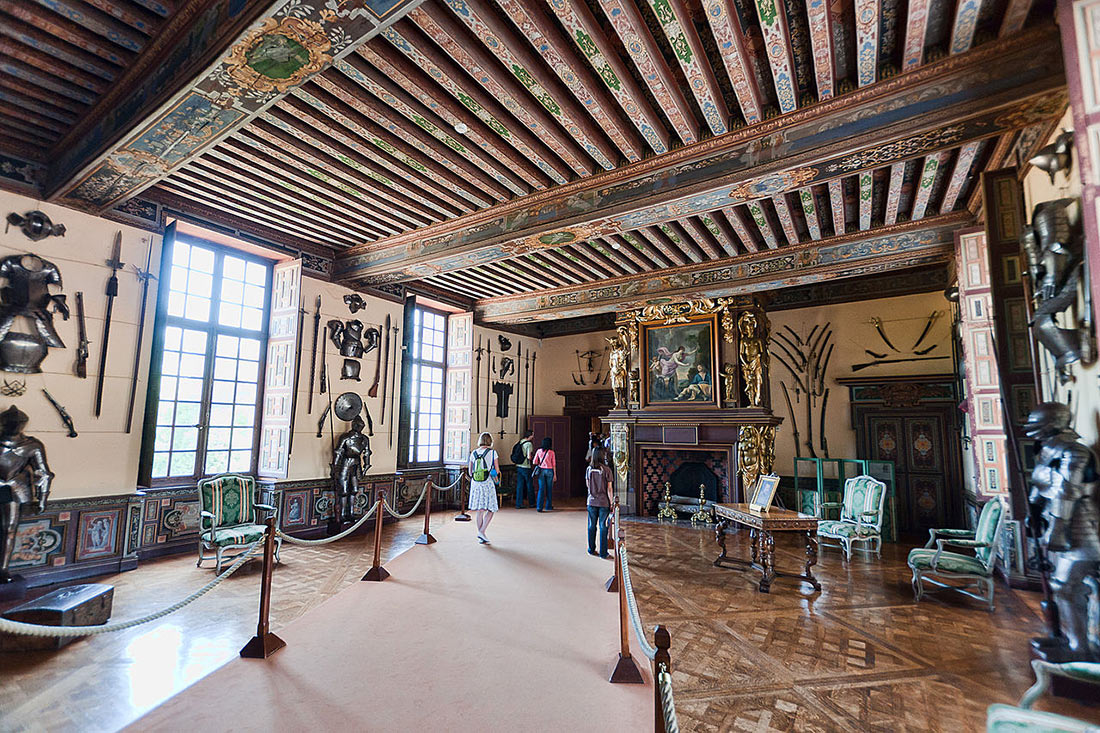 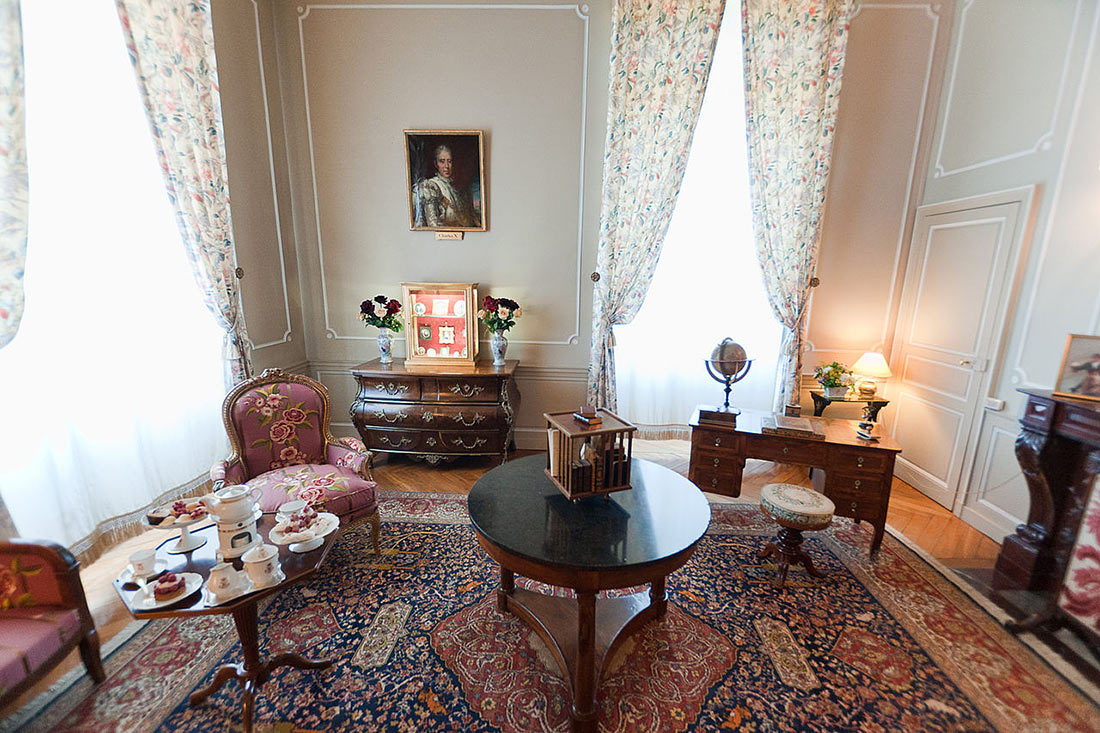 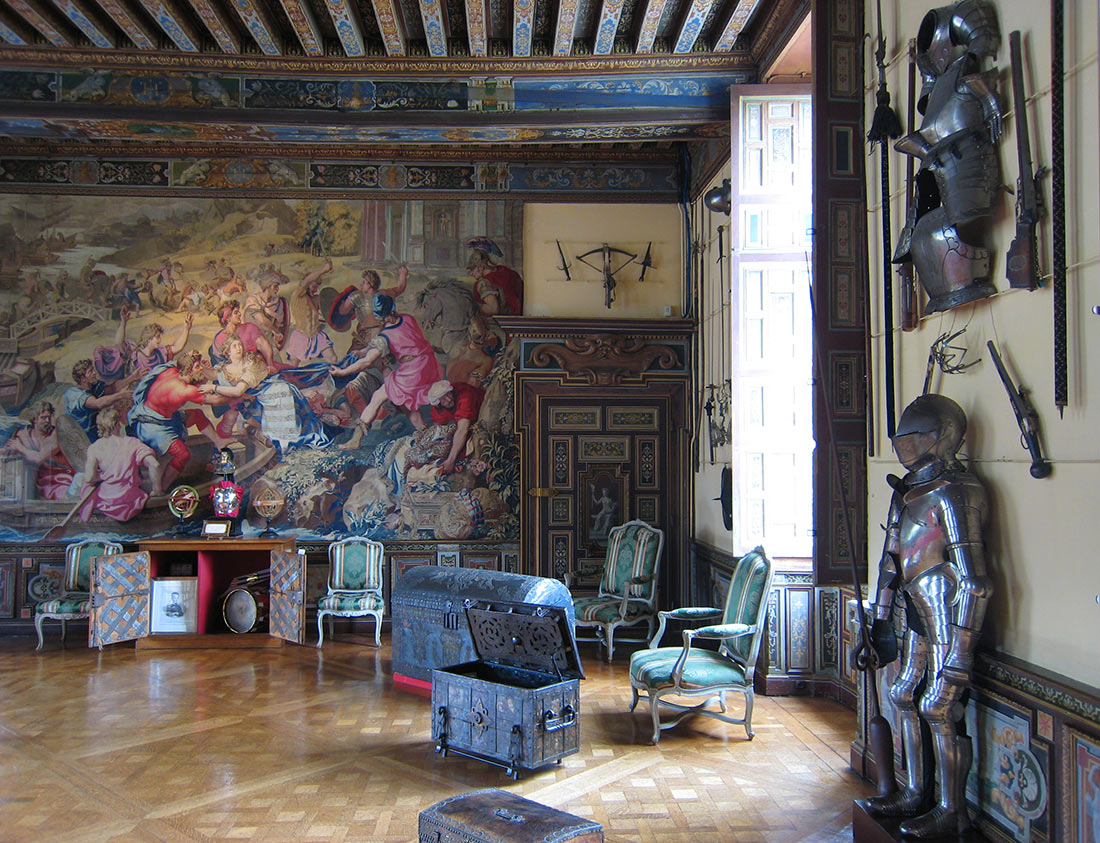 Château de Cheverny is surrounded by a magnificent park decorated with sculptures. There is also a greenhouse, built a little later – in the XVIII century. 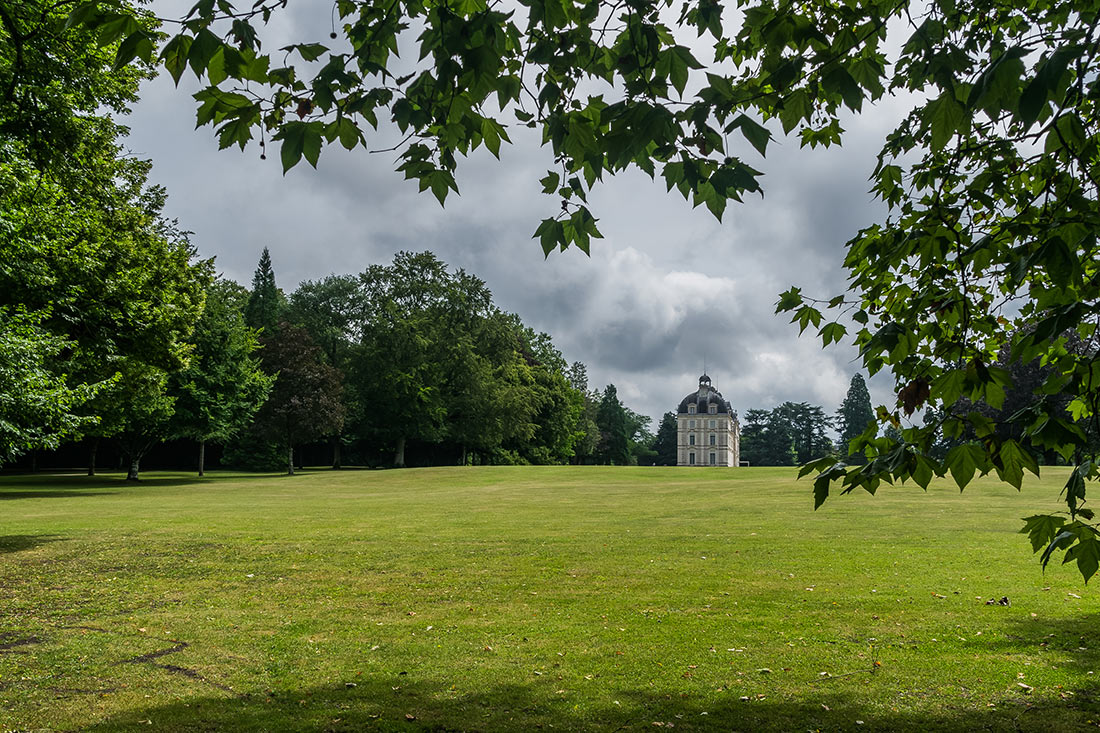 On the territory of the palace there is another unique attraction. This is a kennel with pedigree hunting dogs, which are looked after by specialists. Curious tourists can be present at the feeding of the pets. 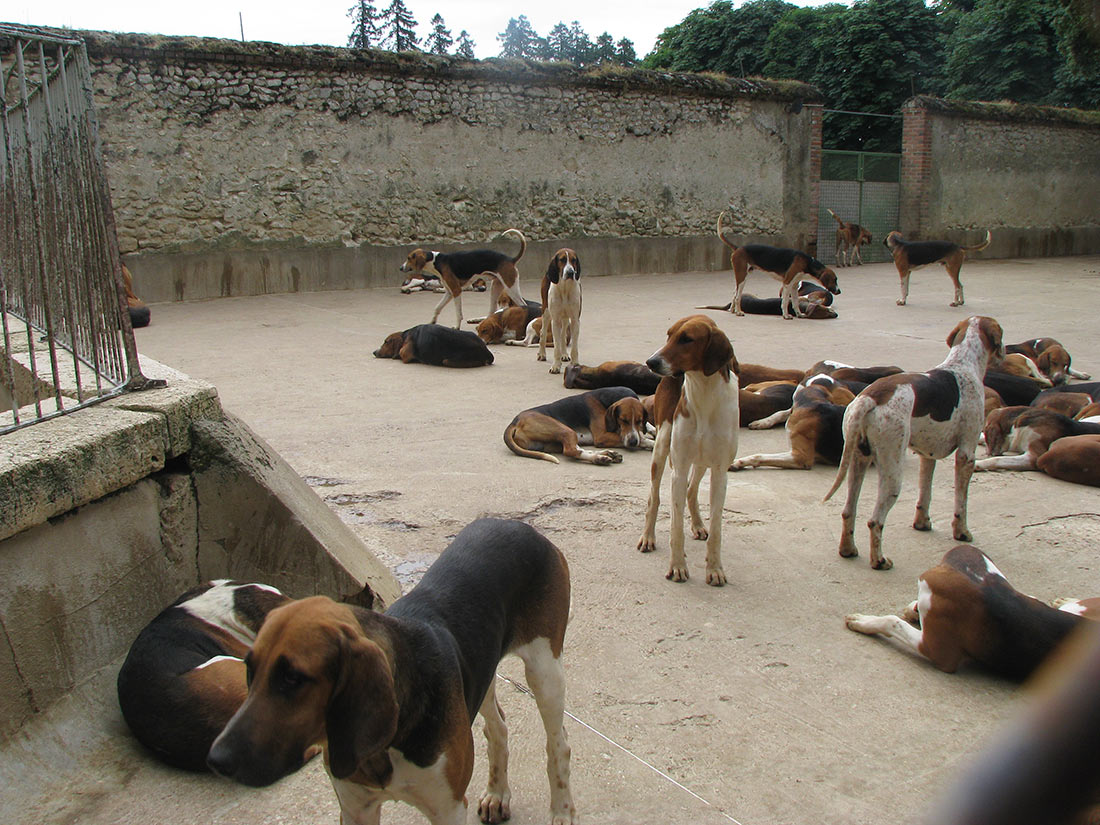 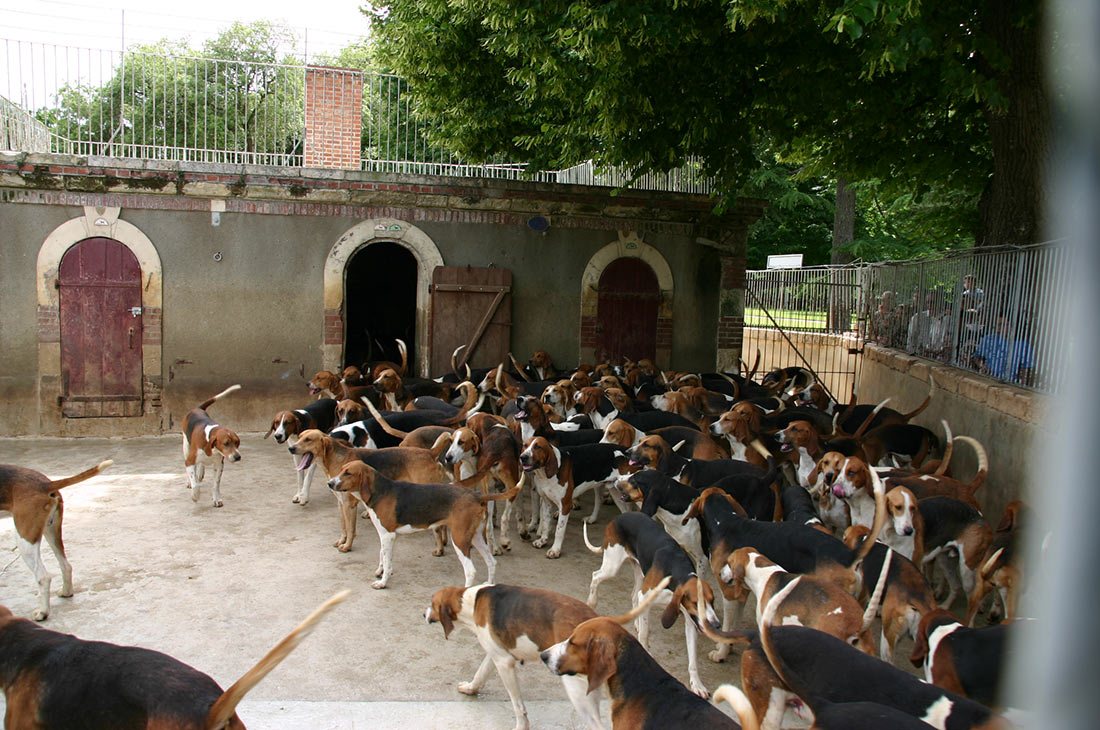 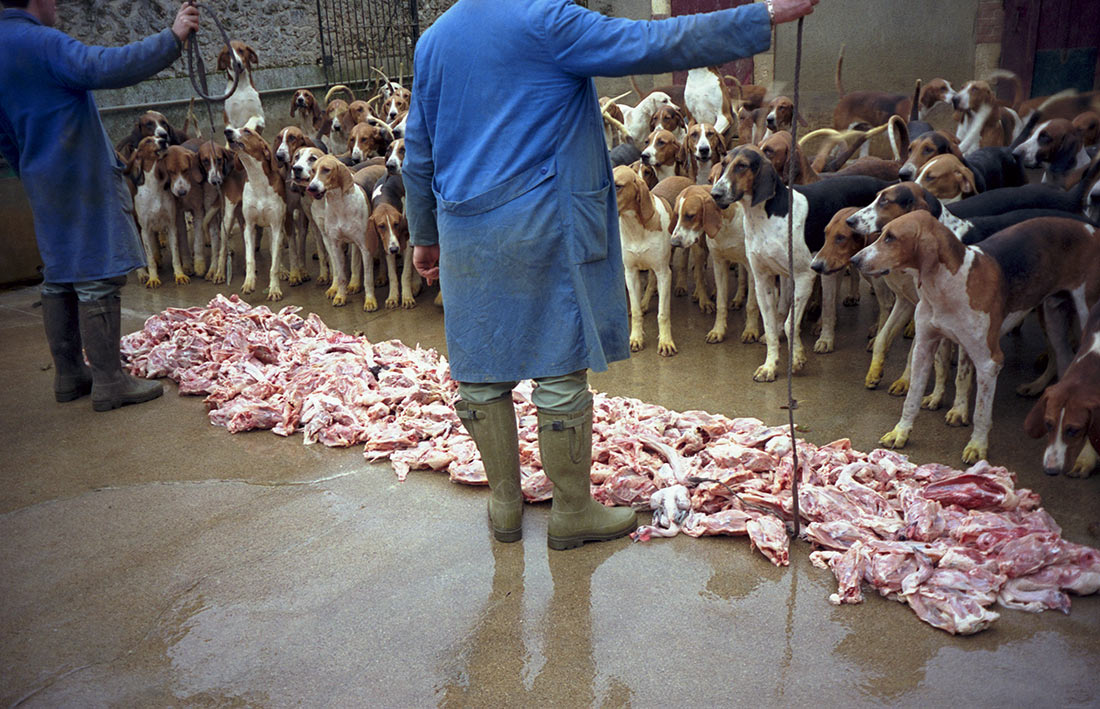 Descendants of the Yuro family still live in the palace. Viscountess Sigala and her husband occupy the right wing of the palace. Naturally, tourists are not allowed here. All other rooms, including the armory and trophy room, are open to the public.

Le château de Cheverny is a château in the Sologne region in the Loire et Cher department, in the center of the commune of the same name, located between the cities of Blois and Chambord.

Built in the 14th century, the Château de Cheverny was originally a medieval fortress belonging to the Hurault family, but was nearly entirely rebuilt in the Renaissance style in the early 17th century by A. Hurault, Count de Cheverny.

In 1654 the castle was purchased by the Marquise E. de Montglass, who invested in its further improvement and decoration of the interiors. In the seventeenth century. The “palace of charms” becomes one of the popular venues for balls and other social entertainments of the French aristocracy. 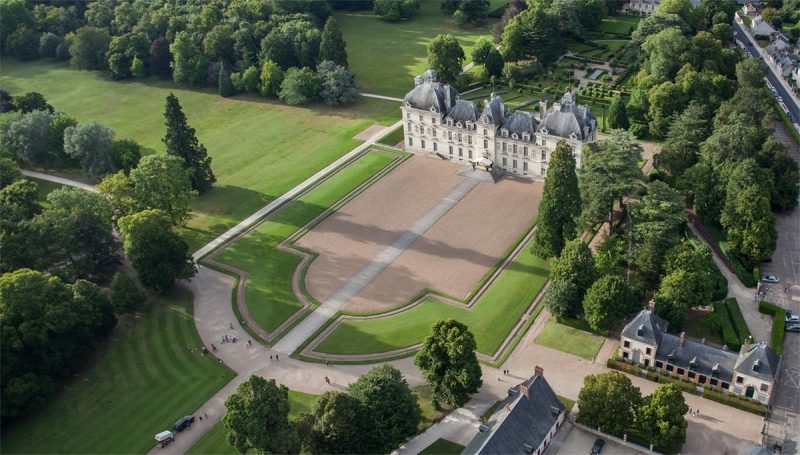 After 150 years, the castle became the property of J.-N. de Cheverny under whom great reconstruction works were carried out. After the Great French Revolution in the first years of the Empire, the Château de Chaverny was acquired by the banker J. Guillot and leased it in 1825 to A-V. Hurault, the Marquise de Vibret.

In 1922, the owners of the château open part of its premises to the public, but retain the Cheverny. Since 2001, the upper attic floor houses the museum of the popular comic book and cartoon character Tintin. It also houses a small exhibit of rally cars.

Features of the architectural style

The author of the project built in 1624-1634 in the classical style of the castle Cheverny was the architect J. Bougier. The German carpenter and sculptor G. Hammerber of Essen and the painter J. Monsier took part in creating its interior.

In the central part of the castle there are fragments of an earlier 14th-century manor house belonging to the Jurault family, which was almost completely destroyed in 1630. Its architecture resembles that of the Château de Blois with its hipped “French” roof with mansard windows and small towers.

The château was built of blocks of limestone mined in the quarries of the Loire-Cherry. Over time, the exposure to sunlight causes the stone to whiten and harden, hence the white color of the southern facade. Its niches contain busts of Roman emperors. The side pavilions of the castle are covered by square domes with small lanterns.

The interior of the halls and rooms

The interior of the castle is decorated with a large number of paintings, sculptures and works of arts and crafts. The dining room interior is decorated with 34 wooden panels painted by J. Mosner after a motif from the novel Don Quixote by M. Cervantes de Saavedra. 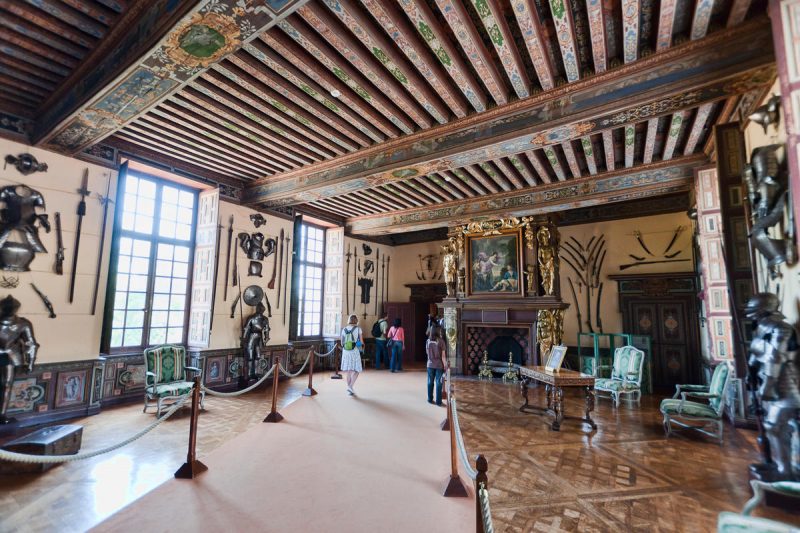 In the center of the dining room is a huge neo-Renaissance fireplace with gold ornamentation and a bust of King Henry IV. The furnishings feature antique oak furniture with Cordoba leather seats and backrests bearing the coats of arms of the Cheverny and Juro families.

On the walls of the Great Drawing Room of the château are portraits of the castle’s owners, Louis XIII, A. de Montpasier, Gaston of Orleans and Anne of Austria. There is a collection of Aubusson tapestries and Louis XVI style furniture. The walls of the gallery between the library and the small drawing room are also decorated with portraits.

READ
Vacations in the UAE 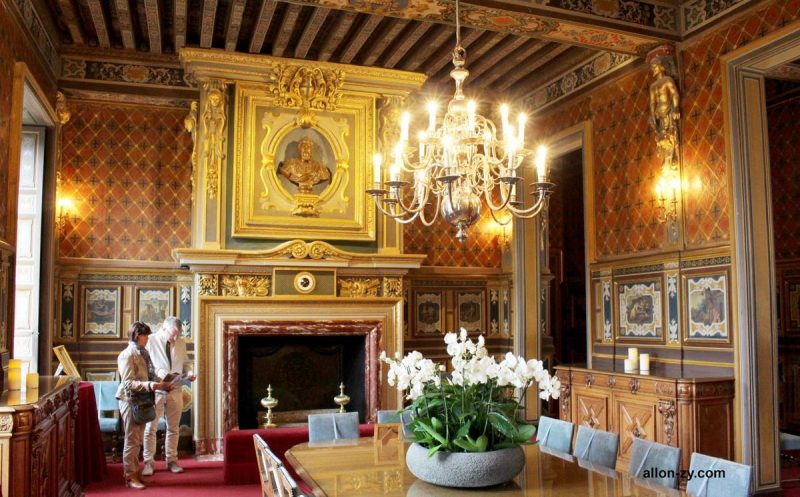 A collection of Flemish tapestries, based on drawings by D. Teniers, is displayed in the small drawing room of the castle. There is also a painting by C. de la Tour in a massive frame. Paintings by J. Mosner are used to decorate the interior of the armory, which houses the armor and edged weapons of the Duke of Bordeaux and the Count of Bourget from the 15th to 17th centuries. 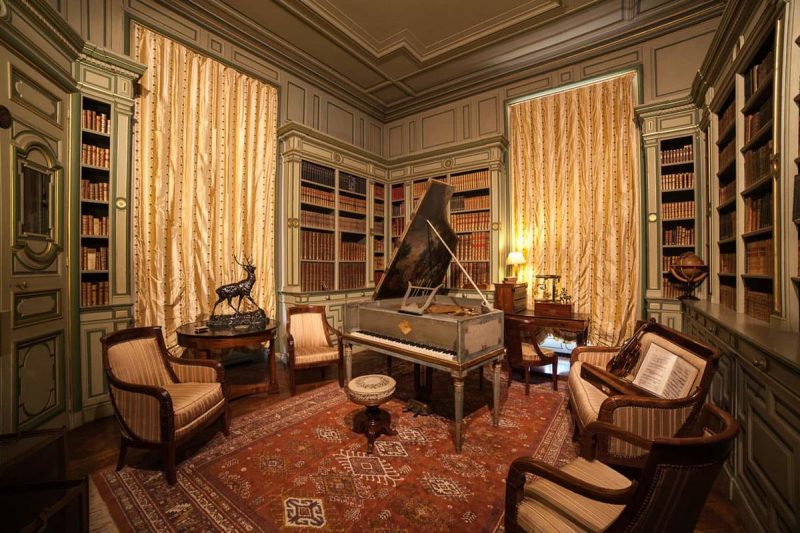 In addition to the seventeenth-century tapestries, the castle’s royal chambers contain sketches by S. Boyer. Alongside tapestries by S. Boyer, the coffered ceilings of the shower room were painted by J. Mosner based on the myths of Perseus and Andromeda. In the lobby and reception room of Château Cheverny there is antique furniture and on the walls there is a Flemish tapestry with a story of fishermen, drawings by D. Ternis and hunting trophies.

The garden near the castle

The old park occupies an area of about 100 hectares. It consists of two parts, differing in landscape design style. There are artificial reservoirs in the park, and its main avenue has a length of about 6 km. Among the greenery of the park linden, cedars and sequoias dominate. In the garden there are also several interesting small buildings.

The interior of the pavilion of hunting trophies is remarkable with a gallery of paintings on the theme of hunting, a pompous fireplace and stained-glass windows by J. Loire. The nearby kennel still houses about 100 hunting dogs of English and French breeds, which all are welcome to feed. 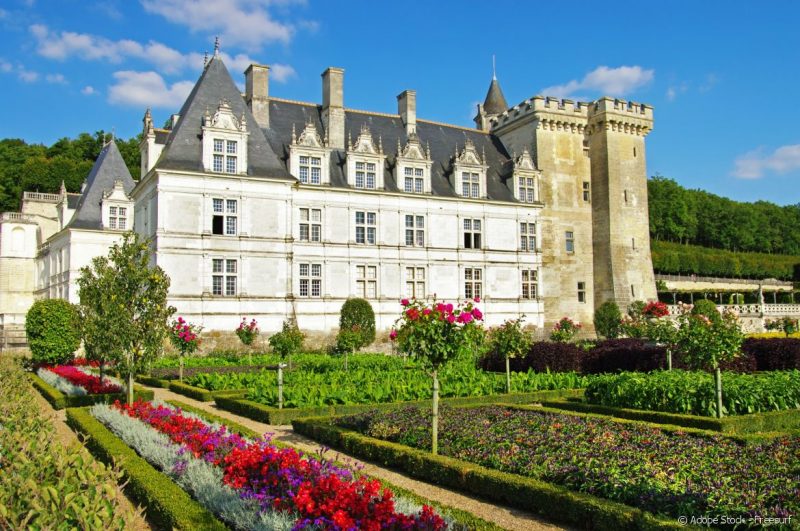 The 18th-century orangery, restored in 1979, is used for conferences and weddings, and other public events. Near the old dovecote of the 16th century castle, now a water tower, are the ruins of the medieval castle of R. Juro.