Trapani is called the city of salt and seafaring . In addition to the beautiful historic center, which has been reevaluated in recent years, it has gorgeous surroundings. Islands near the coast, nature reserves, villages rich in history and archaeological areas among the best preserved in the world. These are some of the most beautiful excursions you can take, starting from Trapani.

The two cities were once in conflict , and today the archaeological areas are still preserved. In Segesta you can admire the beautiful Doric temple and the Greek theater, carved in a rock overlooking the gulf of Castellammare. In the distance of 62 km we reach Selinunta, another important archaeological area of Trapani, where there is the acropolis with the remains of Doric temples and fortifications overlooking the sea. Segesta is 30 km away and can be reached by car from the highway Sp29 and the exit A29dir. 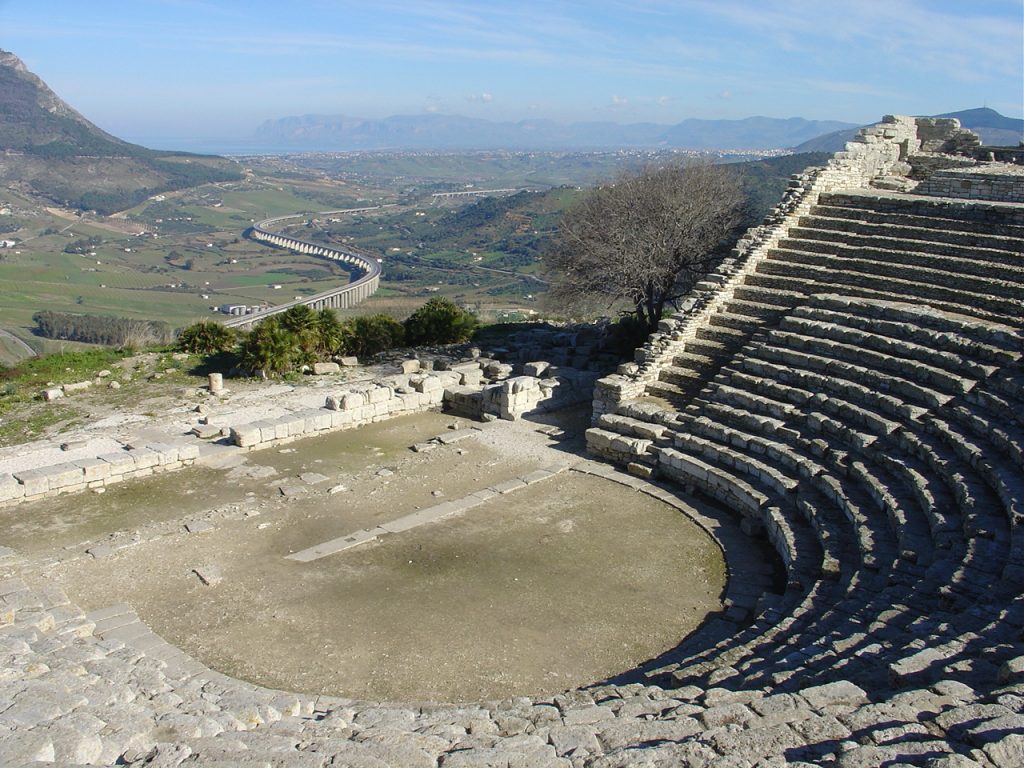 It is an archipelago not far from the Trapani coast that can be reached by hydrofoil in only 30 minutes.

Favignana is the largest of the archipelago, with beautiful coastline, you cannot miss Cala Rossa, Cala Azzurra, Lido Burrone, Cala Monaci and Marasolo. You can stop at Tonnara Florio to sit at the bar and enjoy a Sicilian coffee granita. If you only have one day, it is better to arrive by scooter to optimize your time. 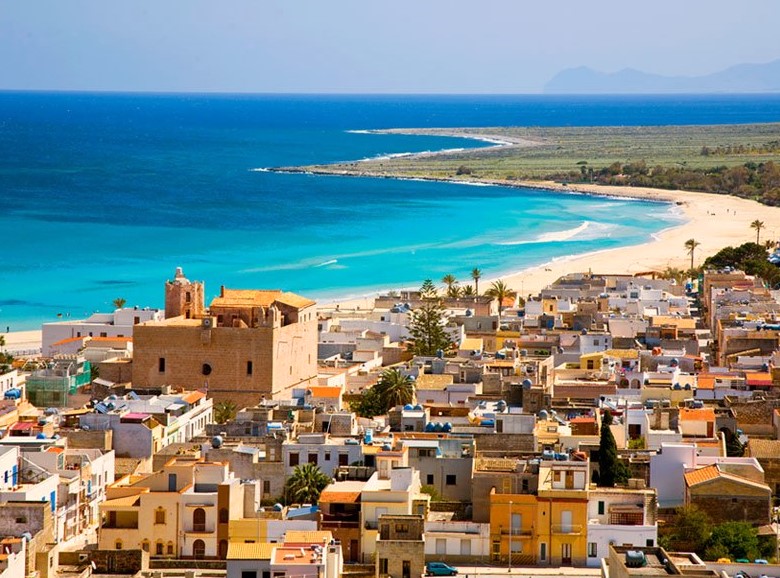 Levanzo is the smallest of the Egadi Islands, ideal to visit in a day, both because of the picturesque sea and because of its inland area characterized by magnificent vegetation. You can visit by boat Faraglione, one of the most characteristic spots with a small pebble beach, the sea cave Buco and Cala Genovese, another special cave because inside it are preserved graffiti and paleolithic paintings. If you prefer to walk, you can make a route on foot with an easy trekking that touches the following points: the houses of Cala del Genovese, Capo Grosso, Capo Tramontana and Florio, an old abandoned farmhouse surrounded by vegetation.

READ
The 10 best beaches in Greece 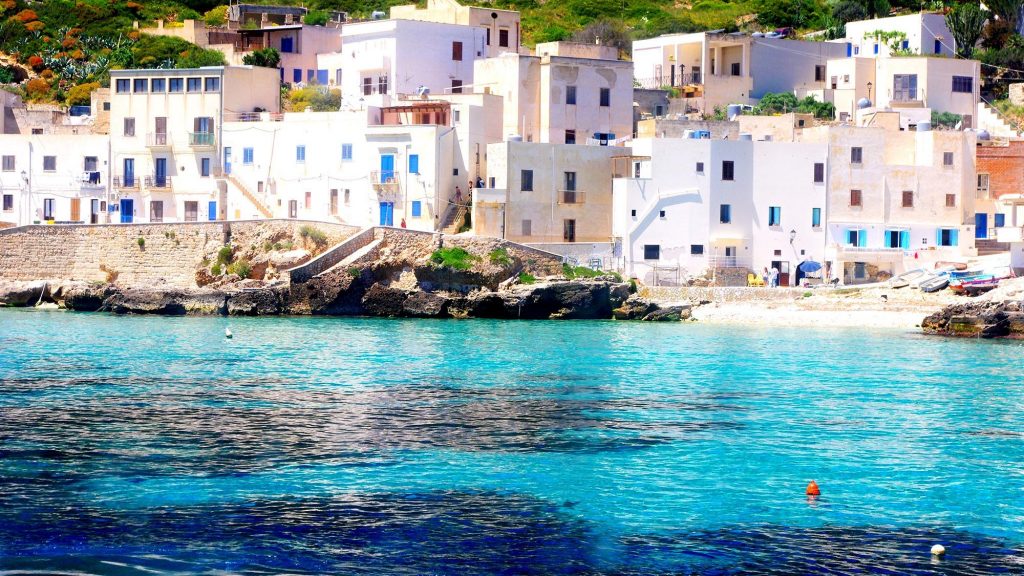 Marettimo is the farthest and wildest, characterized by extraordinary flora, a rugged coastline with numerous caves and a sea of incredible depth. It can only be visited on foot, driving is prohibited, but the island is just over 1 kilometer away. In summer you can also take part in excursions with a donkey. Alternatively, day-long mini-cruises departing from the port of Trapani are organized. 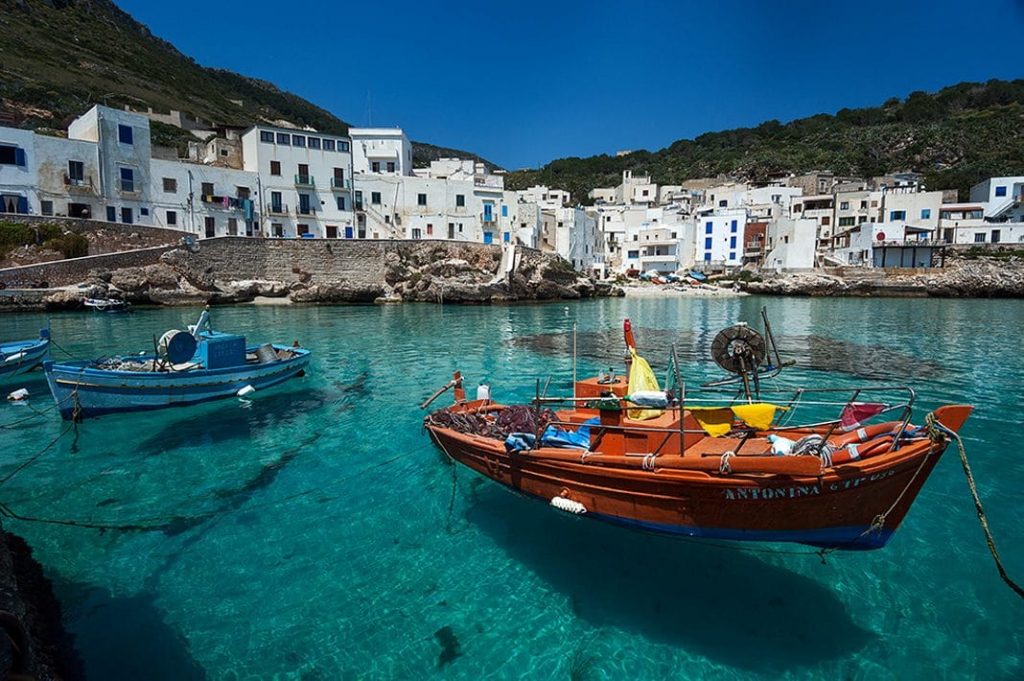 This is one of the almost pristine places to visit. Here you can take a beautiful walk through the Mediterranean bush and then make stops and dive into the magnificent crystal clear waters. You can visit several small museums, such as Manna and Intreccio. The reserve has two entrances, one near San Vito-Lo Capo and one near Scopello. There are various trails and paths within the reserve, ranging from 6 to 8 kilometers in length. 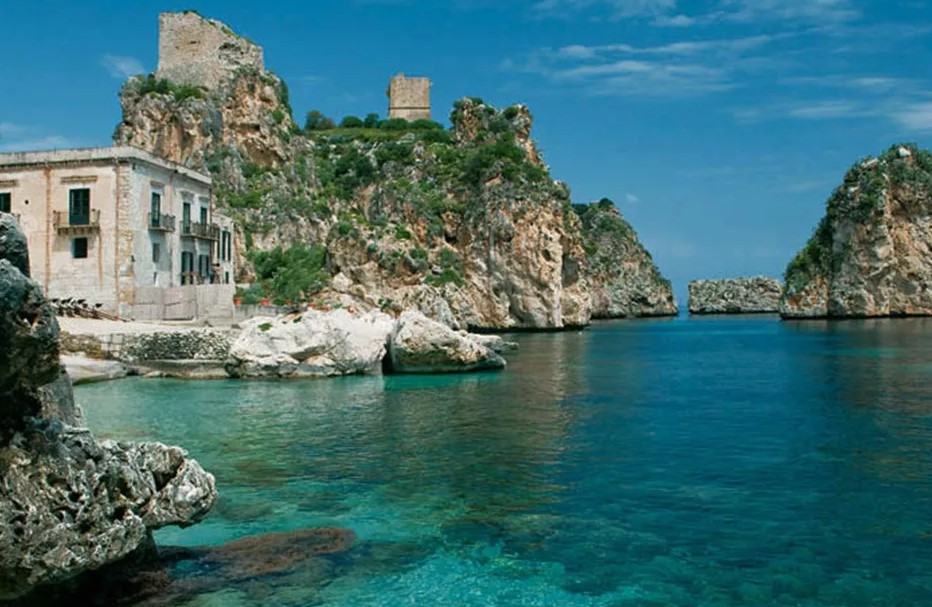 A beautiful place with crystal clear sea, where the famous Cous Cous festival also takes place in September . During the trip, do not miss a visit to the beautiful piazza where the Sanctuary-Fortress, where today the Sacred Furniture Museum, the abandoned tonnara with its ancient charm, the lighthouse with its adjoining Torrazzo, the Santa Claus Bay is located. Margarita and the city beach. To enjoy an unforgettable sunset, reach the beach of Bue Marino in the village of Macari. It is 33,5 kilometers from Trapani and you can reach it by car on SS187 and then on SP16. 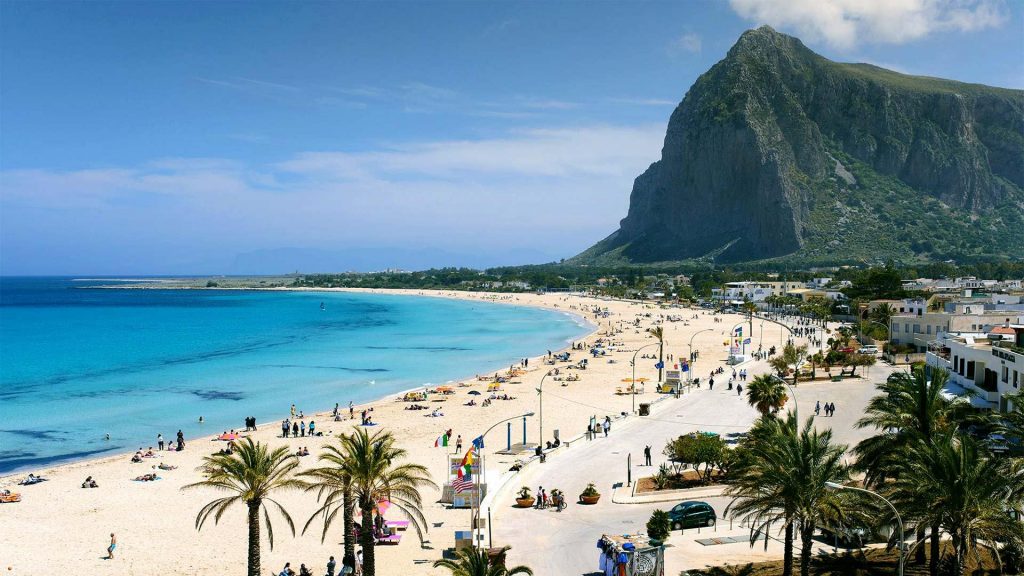 A beautiful corner of Sicily to discover two wonderful places : Castellamare del Golfo the small village of Scopello. You can visit the historic center of Castellammare with the Palazzo dei Crociferi, then the beautiful Piazza Madice where the Church of the Mother stands. Do not miss the Arab-Norman castle, symbol of this city, from which you can enjoy a beautiful view. Then get to Scopello by car or bus, where you can visit the fascinating Tonnara overlooking the mountains. If you are short of time, you can also combine these villages with a visit to Riserva dello Zingaro, which is near Scopello. 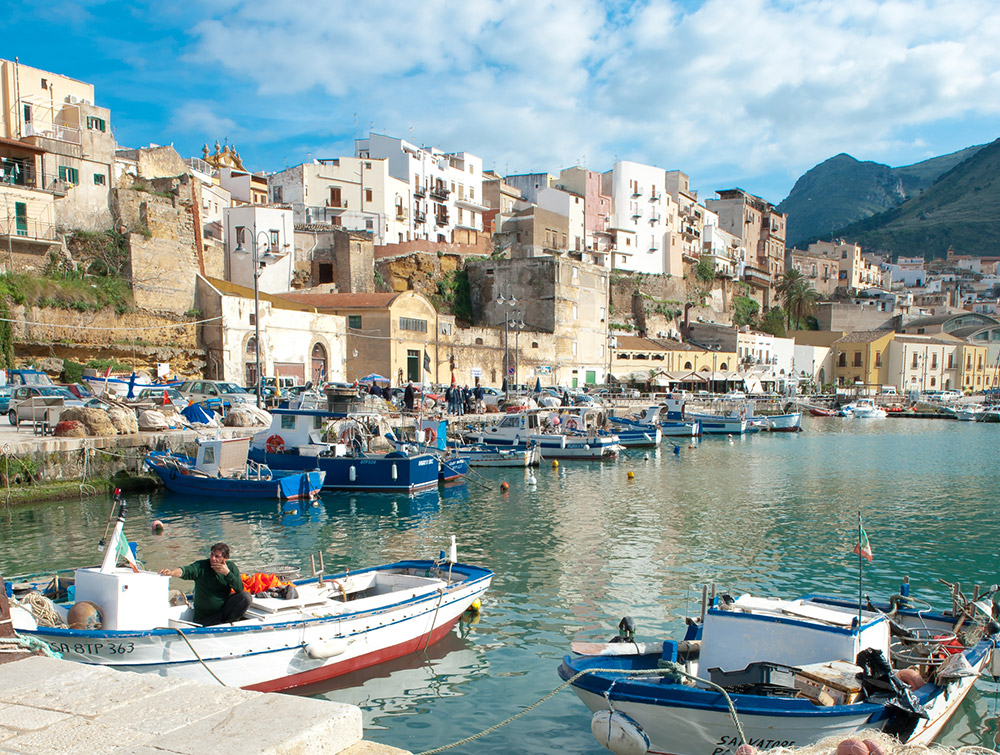 Above the city of Trapani, 750 meters above sea level, is this wonderful village. We suggest you get lost in its narrow streets and admire the fantastic panorama that stretches from the Bay of Trapani to the saltpans and the Egadi Islands. Among the sights not to be missed are the cathedral with its high bell tower, the Castle of Venus, the towers of Pepoli and the municipal villa of Balio. Do not leave Erice without tasting the sweets of the historic pastry shop Maria Grammatico. It is located 6,9 kilometers from Trapani and can be reached by car in 28 minutes following the Sp31 highway towards Erice. 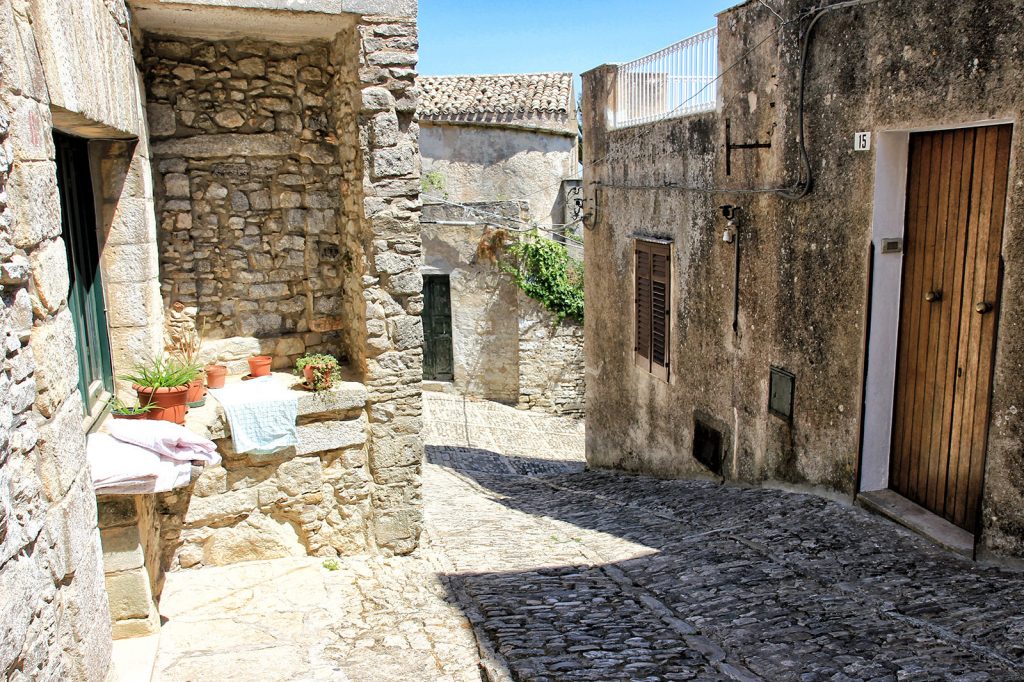 Riserva dello Stagnone is a magical place beyond time and classic tourist routes, a lagoon with small islands near Marsala.

The main attraction is the salt cauldrons where you can visit the Inferza Mill, which houses a museum and a salt shop. Do not miss the Phoenician town of Mozia on the tiny island of San Pantaleo, which you can reach in 15 minutes by ferry from the port of Marsala. Here you can walk around and visit the Whitaker Museum, where you’ll learn about the island’s history and admire the beautiful statues. Finally, the beautiful town of Marsala, famous for the landing of the Thousand, but even more for its typical fortified wine. Its historic center is characterized by medieval gates, pedestrian areas, ancient markets, which in the evenings turn into a nightlife district. Do not miss a visit to Florio’s cellars and beaches, including San Teodoro. It is 21,3 kilometers from Trapani and can be reached by car in 30 minutes by exit SS115 and A29 SP21. 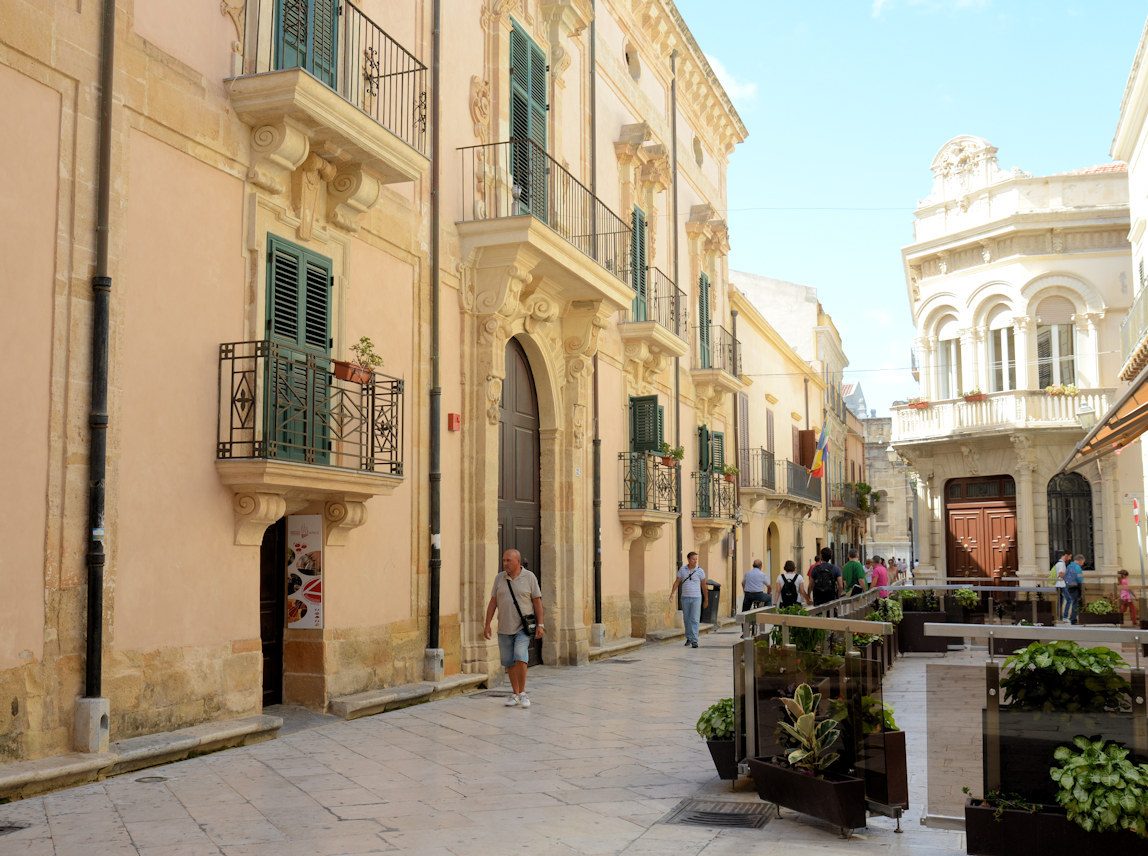 Although Palermo deserves a visit in a few days, if you have little free time, you can arrange a day tour with a half-day tour that allows you to discover the main historical monuments of the Sicilian capital and meanwhile taste all the famous delicacies of the city, the street food of Palermo. Do not miss the Castle of Zisa, the Norman Palace, the nearby Church of San Giovanni degli Eremiti and the Palermo Cathedral. Then discover one of the typical markets of the city, such as Ballaro, and finally reach the nearby town of Montreal to admire the magnificent and imposing cathedral.

READ
The best places to see in Copenhagen, Denmark 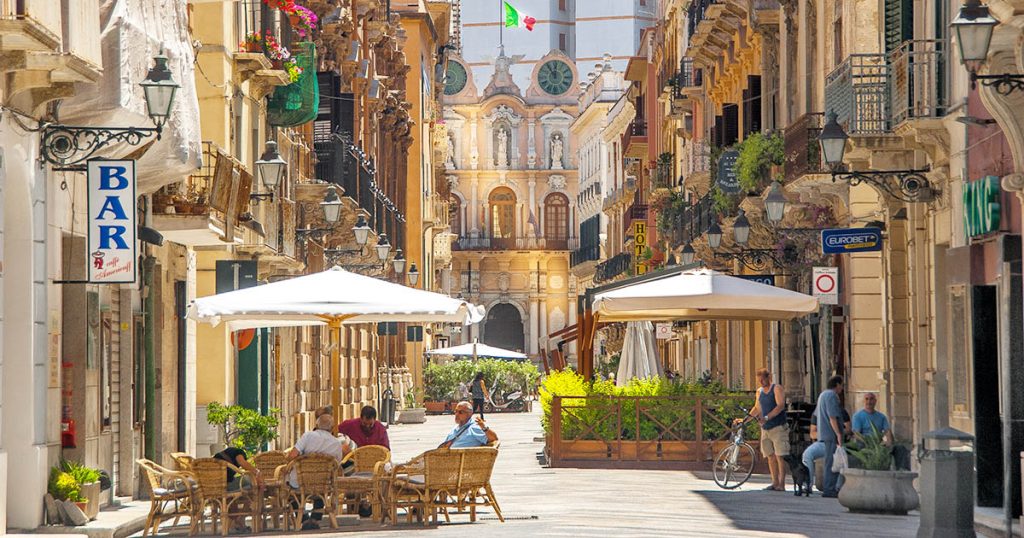 These are two villages in the Belice Valley that are considered some of the most beautiful towns and villages in Sicily and Italy. Salemi is a medieval Arab town, nestled between rolling hills of vineyards and olive groves and rising around the Norman castle, whose round tower terrace offers a vast panorama of western Sicily. The historic center is a collection of architectural treasures, from historic buildings made of local Campanella stone to churches, the Jewish quarter of Giudecca and the Islamic quarter of Rabato. 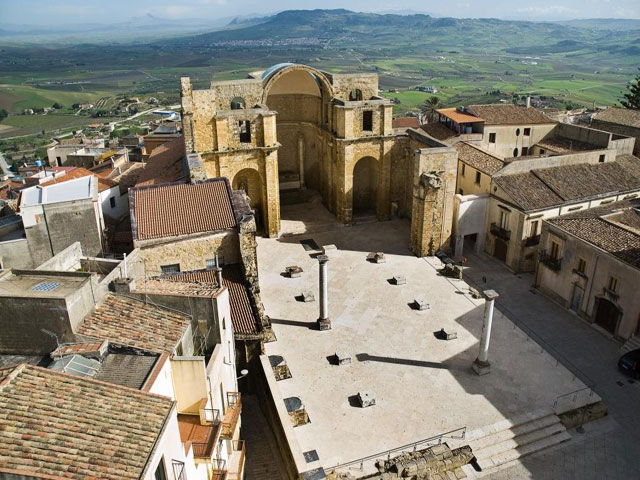 Salemi is also the City of Bread , and every year there are events dedicated to the preparation of religious breads. Gibellina is known for the famous Cretto of burri. Burri took part in an initiative to relaunch the neighborhood, designing a giant monument that replicates the streets and alleys of the old town: it stands in the same place where the ruins once were, but now cemented by works. From above, what is the largest piece of modern art in the world looks like a series of concrete cracks in the ground: each crack is two to three meters wide and the blocks are about sixty meters high. Near the work, you can also visit the ruins of the Ghibellina.

Trapani is located on the western tip of Sicily on a promontory at the foot of the rugged Mount Erice, towering like a sentinel over the surrounding countryside.

The center of town

Walking around Trapani is like immersing yourself in different historical eras. In every corner of the city there are interesting palazzos, churches and monuments that tell the story of life in the city in different centuries. The pulsating heart of Trapani is the port. 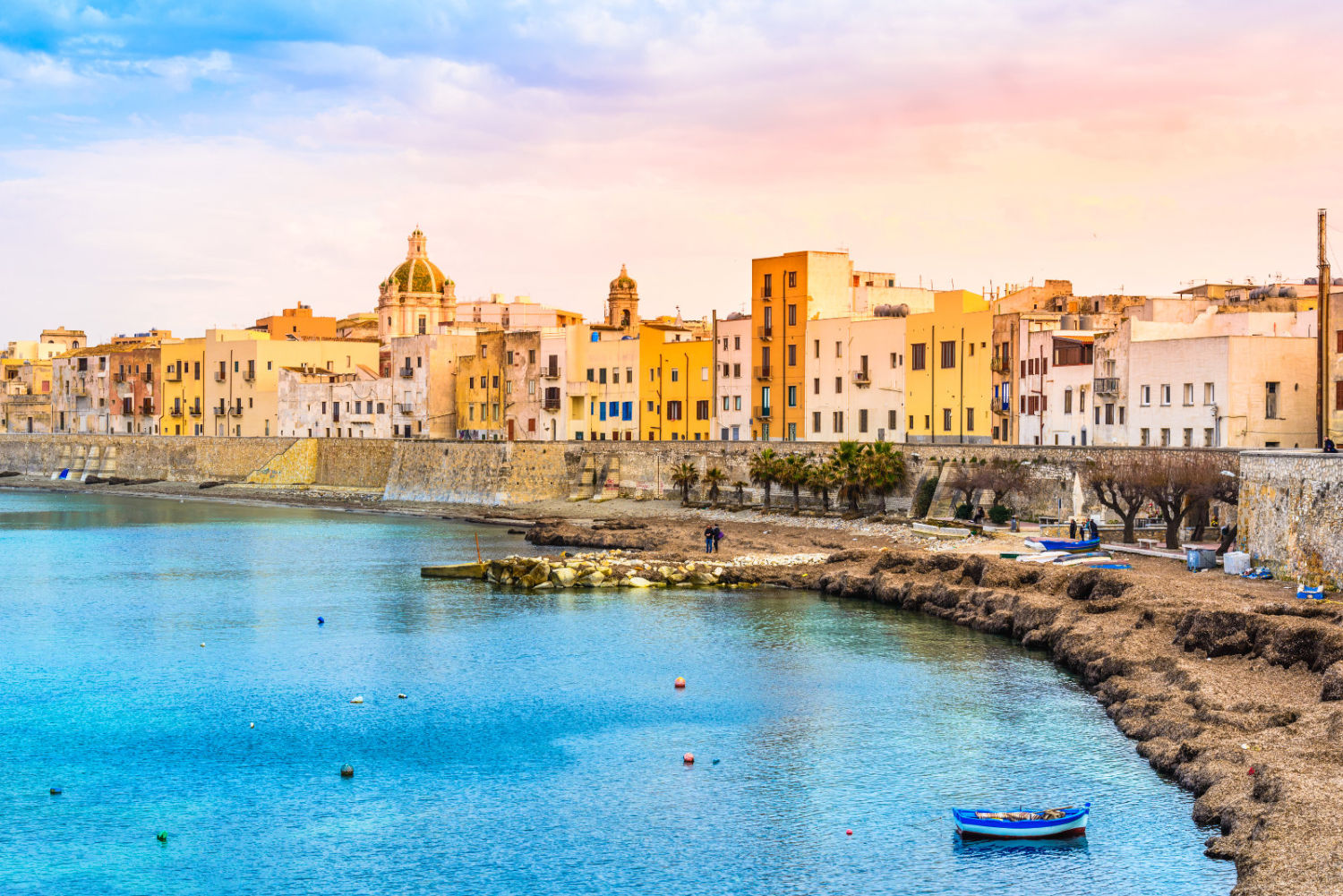 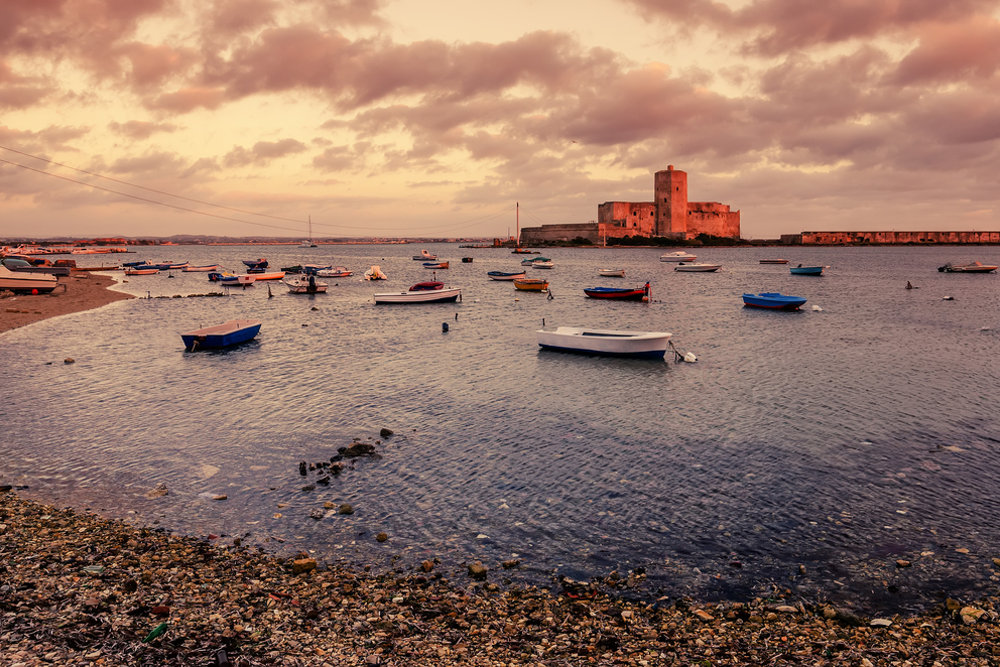 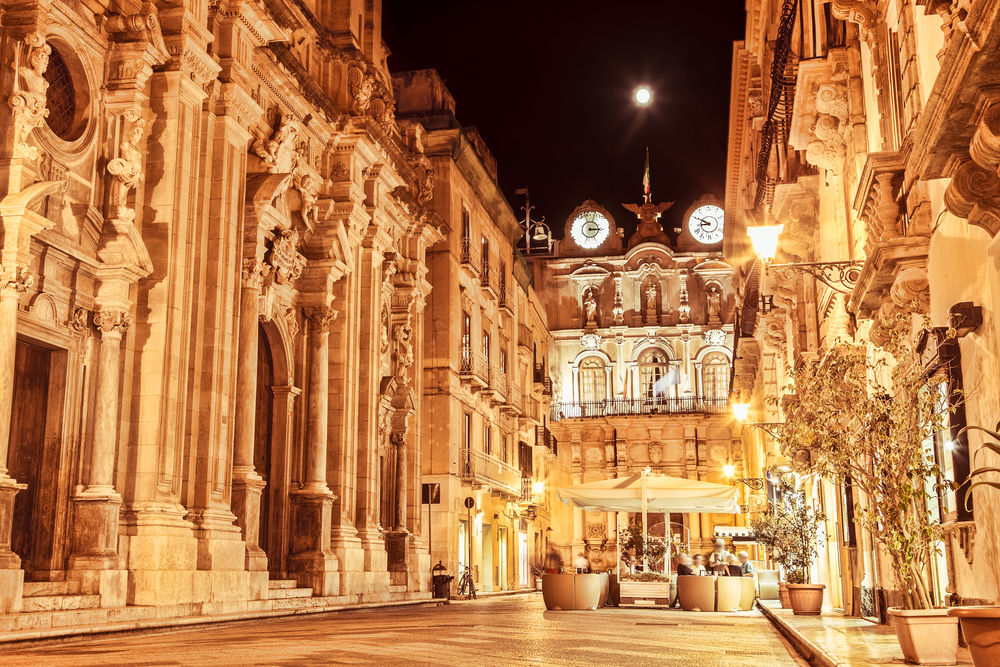 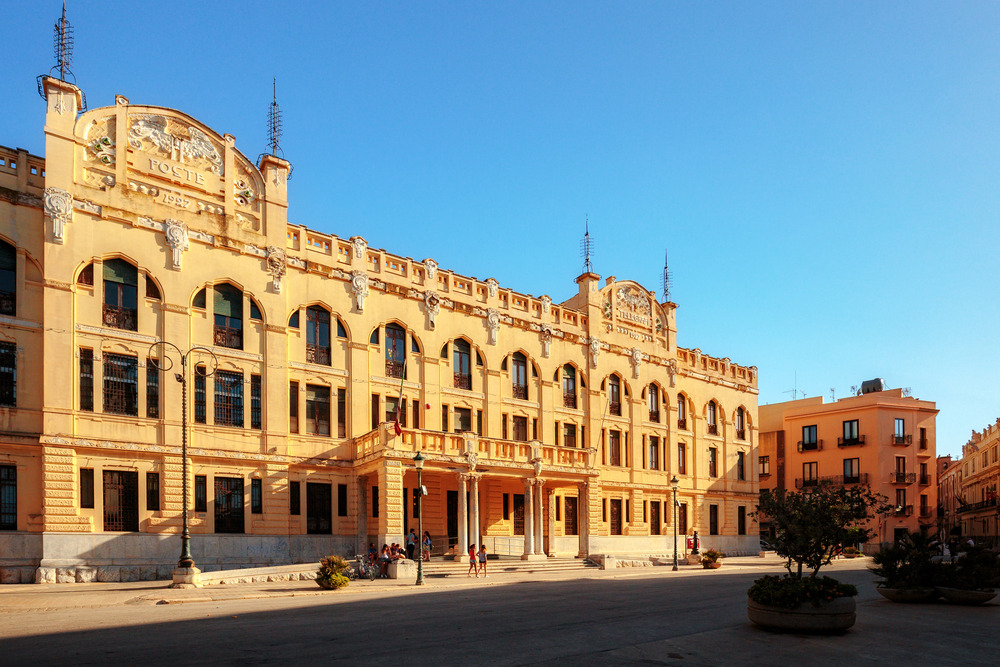 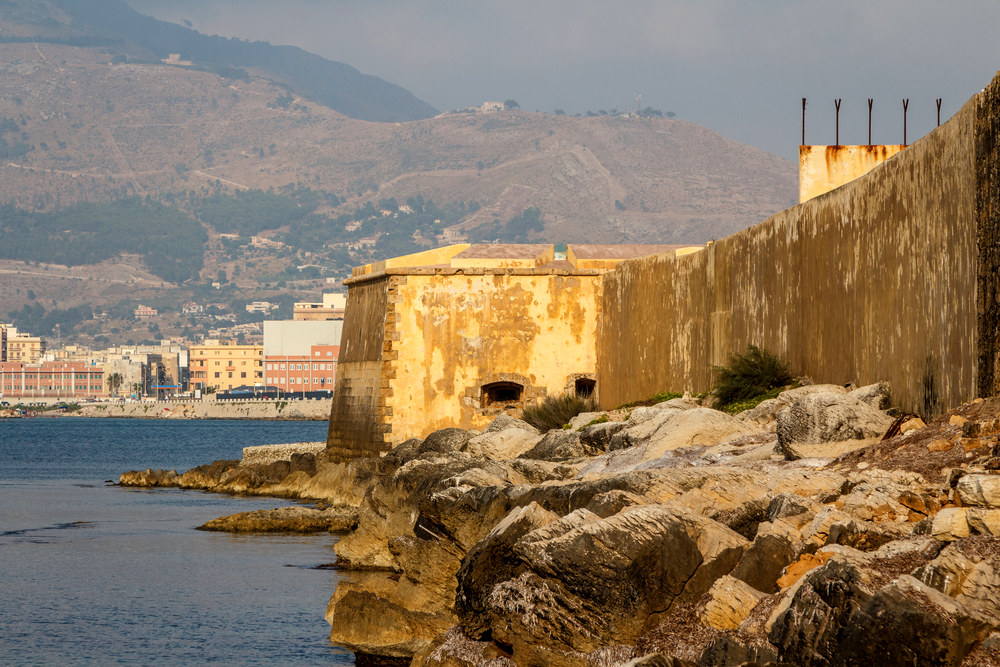 The Casina delle Palme or “Palm House” is the first thing we see in the city. The intriguing liberty-style building appeared in 1922. It quickly became the city’s salon where residents met for a cup of coffee. Remarkably, a real palm tree grows inside this snow-white house, which over the decades has outgrown both the attic and the roof.

On Via Garibaldi, traditionally the city’s main street, are the neoclassical Palazzo Riccio di Morana and the pompous 17th century Palazzo Milo. Take time to visit the Abbey of Badia Nuova with the Byzantine Church of Santa Maria del Soccorso. A large Baroque altar stands out in its Sicilian splendor. 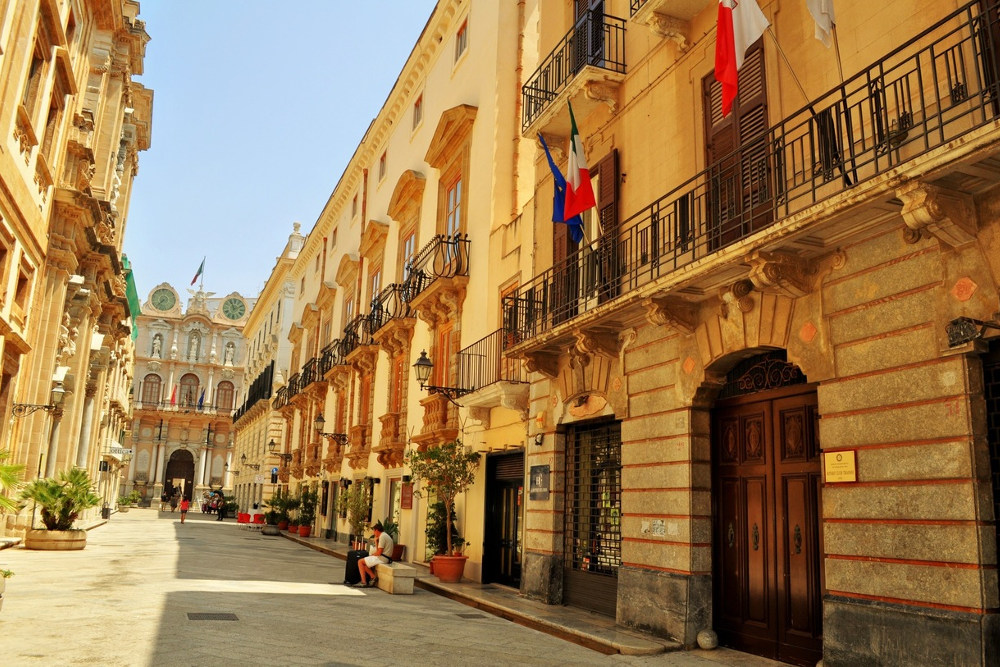 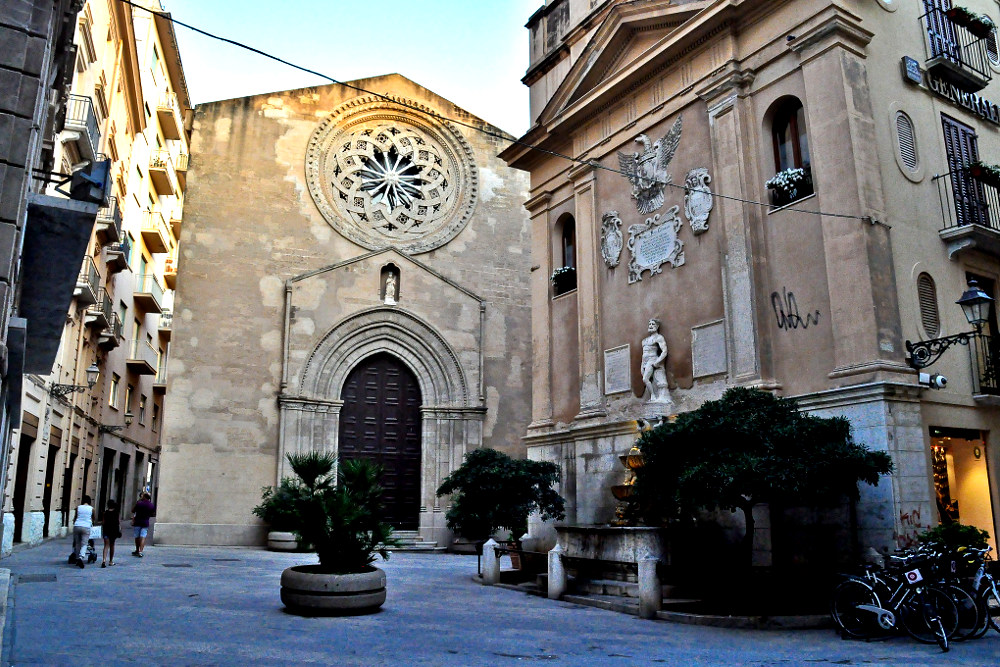 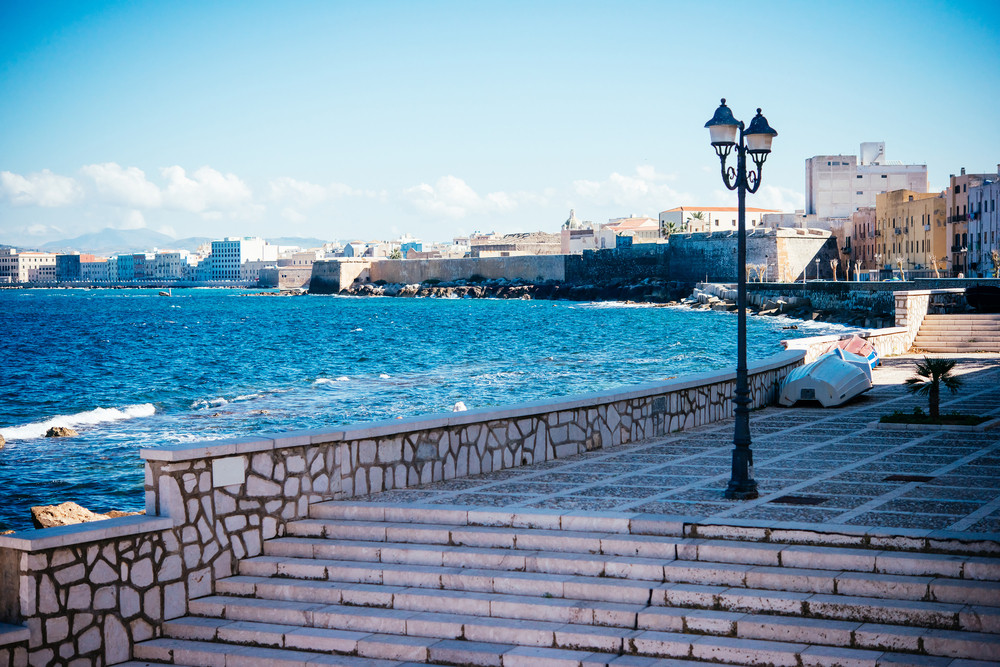 Palazzo Senatorio, adjacent to the 13th century Clock Tower, decorates the beginning of Corso Vittorio Emanuele, a long main avenue with many beautiful mansions. At the other end is the Torre di Ligni (“Tower of Ligni”), one of the symbols of Trapani.

The Spanish Fort, built on a rock, houses the City Museum, which hosts a collection of archaeological finds from the province of Trapani, including helmets from the first Punic War and Roman amphorae.

Pepoli Museum, adjacent to the massive Church of Annunziata, is housed in a former 14th-century monastery. It contains a vast collection of paintings, statues, coral and majolica ornaments and tombstones assembled by Count Pepoli.

The promenade of Trapani stretches for several kilometers and runs along the ruins of the ancient city wall. The border between the old town and the new is Piazza Vittorio Emanuele.

Farther along, in Piazza Vittorio Veneto, is Palazzo D’Ali, now the seat of city administration. Opposite it is the Palazzo delle Poste, built in the libertine style. A little further away is the city park of Villa Margherita, the “green lungs” of the city. Here, for example, you can see giant ficus trees planted back in the 19th century. 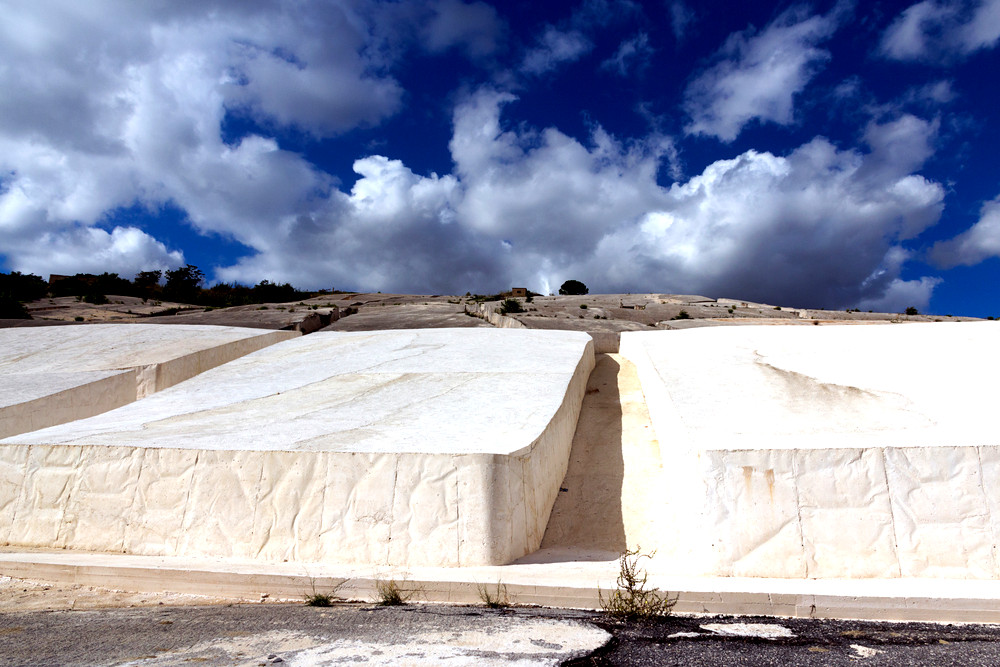 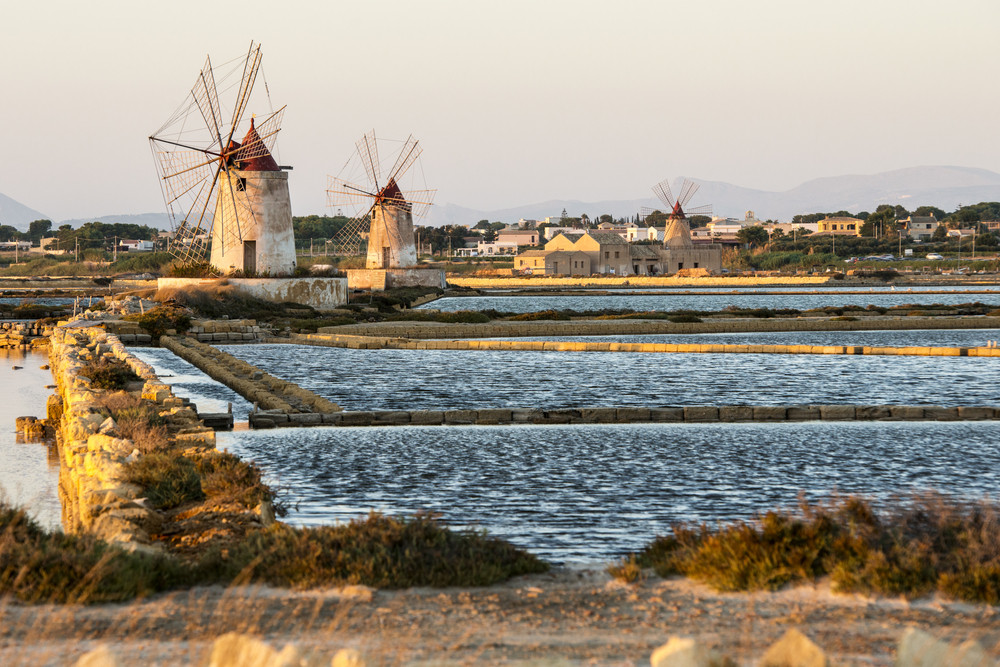 The Saline di Trapani e Pacheco Nature Reserve is located south of Trapani and extends to the village of Salina Grande. The nature reserve was created to protect the wetlands that serve as an important staging point for migratory birds migrating to and from Africa. The ancient salt pools blend spectacularly with the natural scenery, adding to its charm. It is especially beautiful at sunset, when the rays of the setting sun paint the pools in shades of pink, red, and gold. And although this spectacle lasts very briefly, it remains in the memory forever.