Bali’s top 7 attractions: the main natural and architectural wonders on the “island of the gods”

Bali is the Indonesian Island of the Gods. This is the name of this resort paradise of Indonesia, characterized by mild climate, picturesque tropical nature and colorful culture. People come here for unforgettable beach holidays and to explore the most remarkable natural and architectural wonders. Below are some of the main attractions of Bali, which are attractive opportunity to get in touch with the exotic cultural heritage of the islanders.

Bedugul in the mountains of Bali has many attractions . First, it lies on the shores of volcanic Lake Bratan, which itself is impressive with its incredibly scenic panoramas. Secondly, there is a very beautiful Indonesian temple complex – Ulun Danu, the colorful architecture of which against the background of the lake surface in the sunset allows you to fully enjoy the calm, tranquil atmosphere of the area.

Along the coast of the lake is a botanical garden, which is also of interest to tourists. In its vast expanse there are several hundred varieties of amazing orchids and more than six hundred tropical trees, which are home to many exotic birds . Also in the village of Bedugul worth a visit to the local market, which offers an extensive selection of plants and spices. 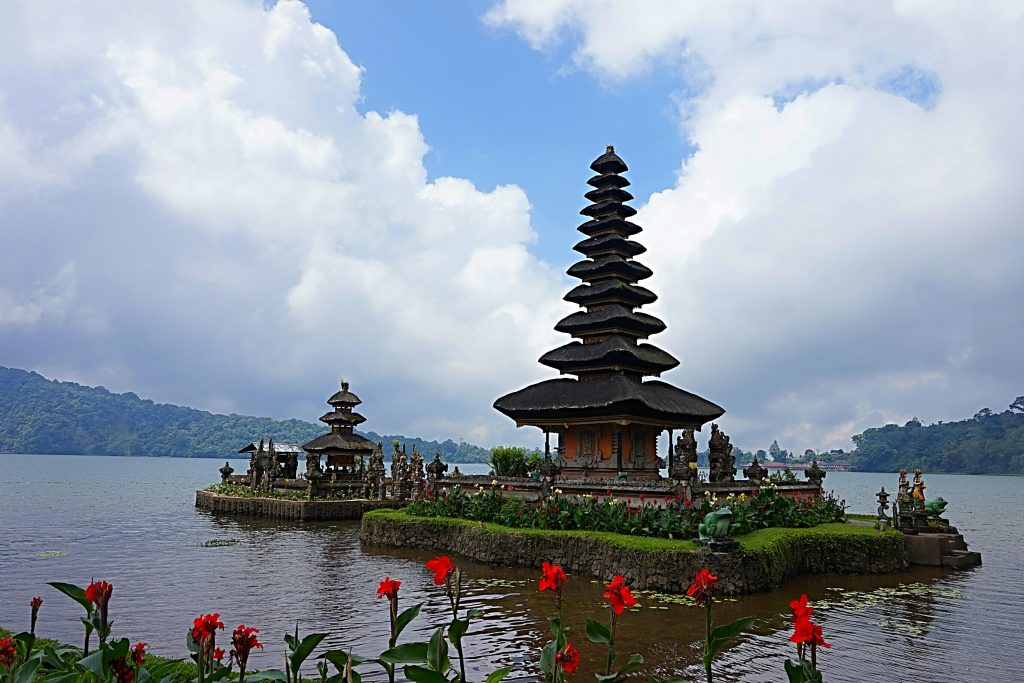 On the northeastern edge of the island is the active Gunung Batur Volcano, which is also one of Bali’s popular attractions. Its outer caldera was formed 29,000 years ago.

At the top of the volcano, which reaches 1717 m, there is a picturesque lake . The sight of the lake usually gives tourists the strength and motivation to climb Gunung Batur Volcano. The area around this landmark is suitable for picnics and bike rides. 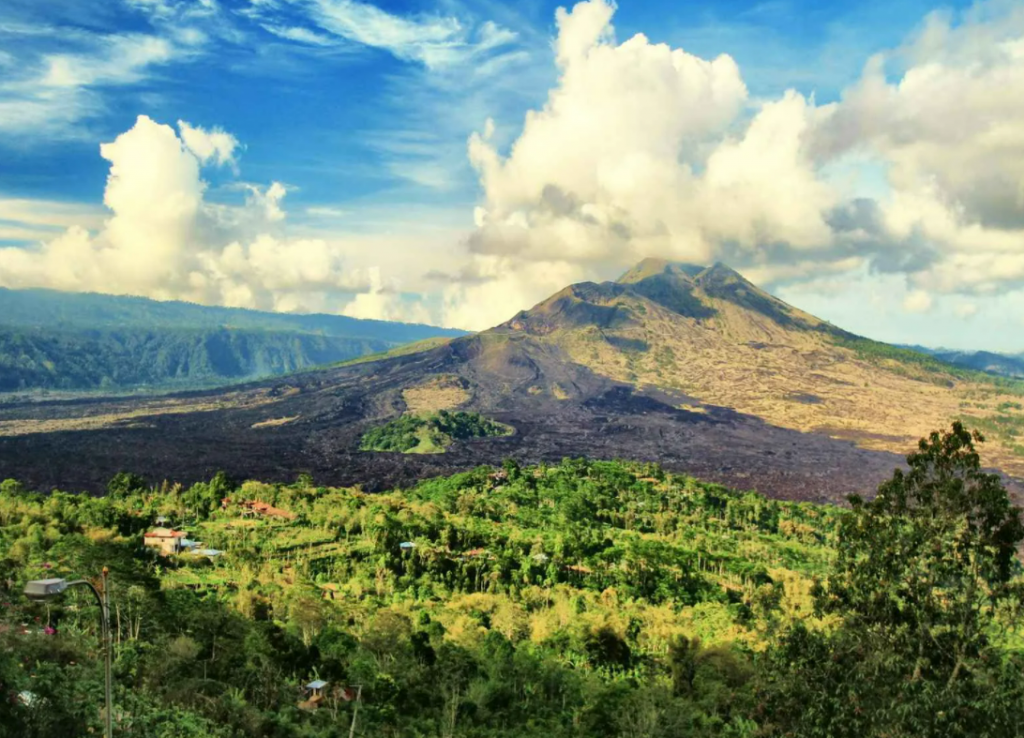 This picturesque temple complex is usually referred to as the “mother of all temples” in Bali . It consists of 22 sacred structures located on the southern slope of Agang. The main temple of Pura Besakih was built in the 17th century.

READ
Top 10 most beautiful cemeteries in the United States

The structure was able to survive the devastating volcanic eruption. Lava flows came down just a few meters from the temple. Local residents saw this as a sign.

According to Balinese belief, the temple did not collapse because it is under the patronage of the gods. Tourists can not visit the interior of this temple complex Bali. But one can stroll around the outer area and take pictures of these Hindu temples. 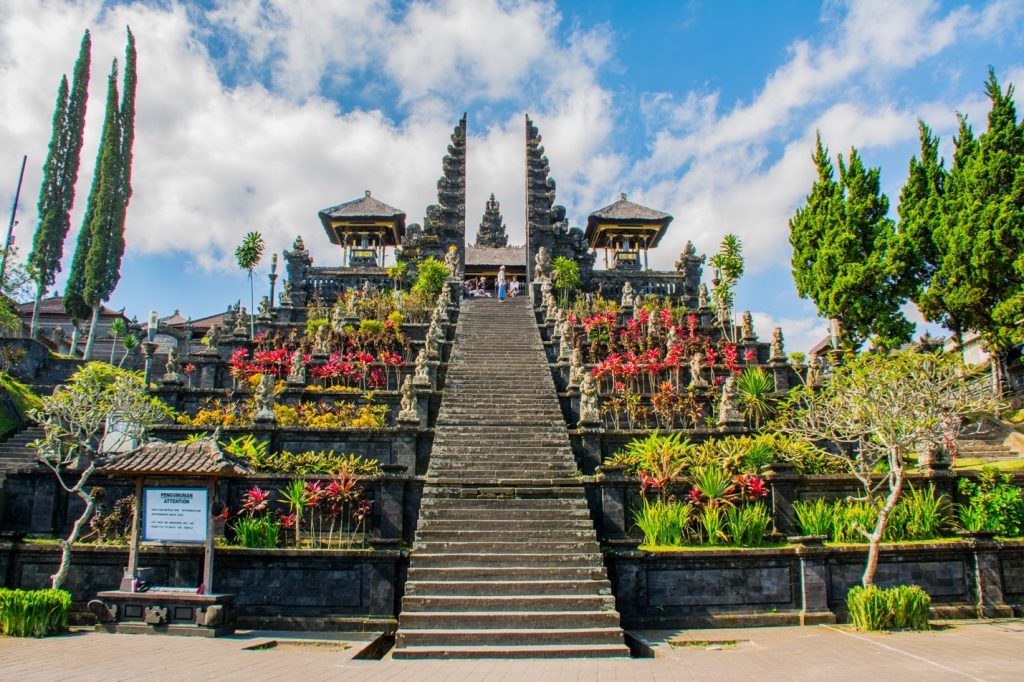 This Bali landmark is the island’s oldest architectural and cultural monument. The mysterious cave is located in Ubud. Artificial grotto in the form of the jaws of an ancient demon was cut out in the 9-11 centuries by Hindu monks.

The outer part of the cave is decorated with reliefs of elephants. This peculiarity of decoration caused the appearance of the name “Elephant Cave”. There is a pond near the grotto and Buddhist statues inside the cave temple. 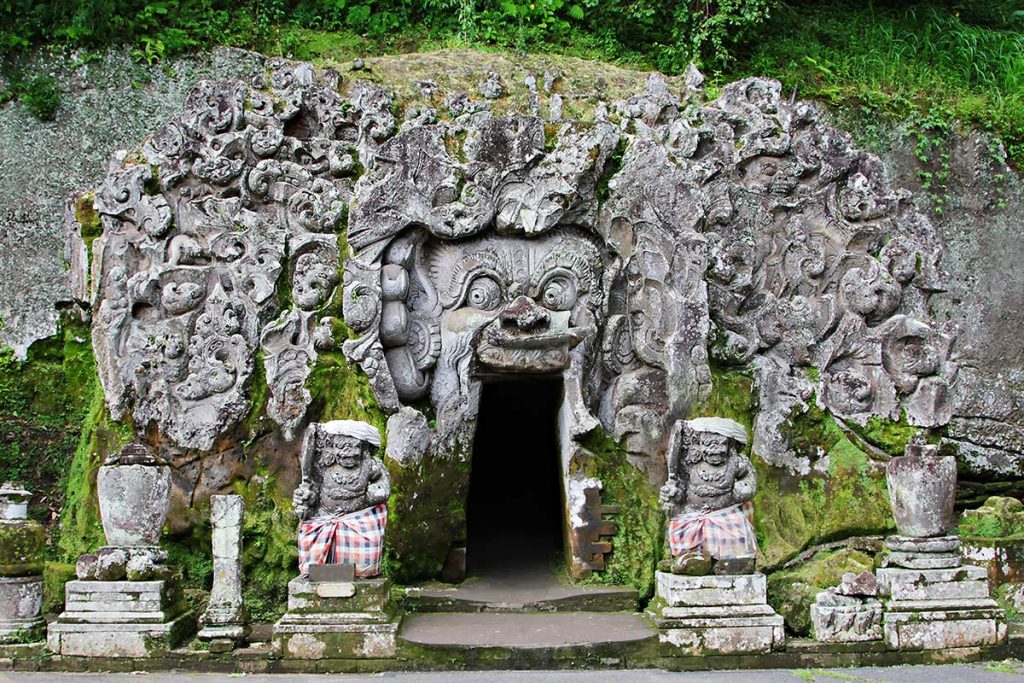 Human relatives (according to Darwin) in Bali are recognized as sacred animals, and are treated accordingly. Near Ubud you can visit the sacred Monkey Forest, where in addition to its inhabitants and dense vegetation you can see many religious buildings.

At the farthest end of the forest is an ancient temple dedicated to the deity Rangda. There is also an ancient cemetery and an ancient temple for funeral processions. Of no less interest than the architectural structures in the Monkey Forest are the banyan trees whose roots hang down. 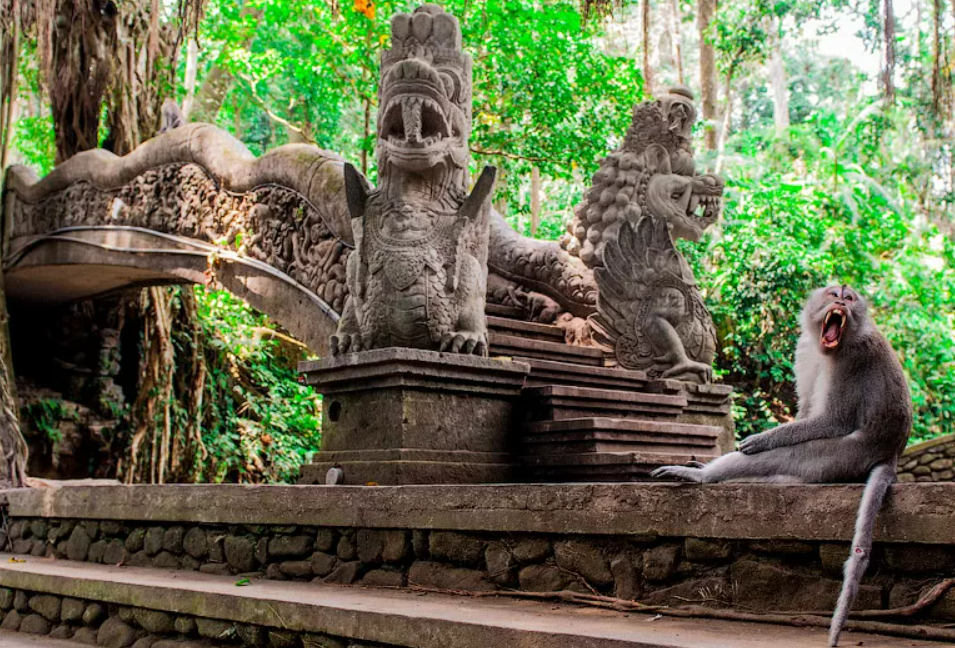 A list of Bali attractions would not be complete without including the most popular beach among tourists. Kuta is a long sandy coastline near the resort of the same name, about 7 km from the Balinese capital.

This sight of Bali is most popular among surfers, because Kuta is famous as the “Mecca of surfing” because of the ideal conditions for conquering the waves. But the clean beach with fine white sand is also perfect for traditional beach activities.

This landmark of Bali is a cultural symbol of Indonesia and a kind of business card of the country for tourists. The unique look of the temple is given by its location on the coastal cliff, on which the powerful waves of the ocean crash. That is why this shrine was given the name that means “Land at Sea”.

Pura Tanah Lot is one of the seven temples of the sea in Bali. It is thought that this unique shrine on the coastal cliff was built in the 15th century. To get to the temple on land is possible only through a narrow isthmus, formed at low tide. But tourists are allowed to contemplate the beautiful architecture of the structure only from the bottom of the cliff.

Bali. Island of the Gods. 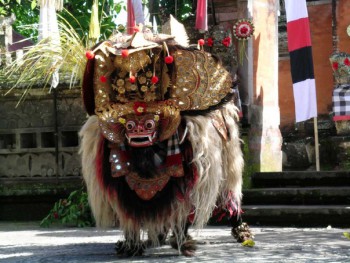 A tourist coming here for the first time is breathtaking from the beauty and variety of views opening up to him. The bright green of tropical vegetation and the blinding whiteness of snow mountain caps, golden sandy beaches and all the shades of blue, crystal clear ocean waters, the cosmic architecture of ancient temples and many colors of national costumes, a cuisine for all tastes, a variety of medical Balinese massages and thalassotherapy. And also – it’s rare where you’ll meet so hospitable people. Only on the magical island of Bali.

Bali is called the “pearl of the tropics” and the “island of the Gods”. According to the ancient legends, the gods were bewitched by the beauty of local nature and therefore they chose this island as the place where they could rule the world and rest from their labors. And these legends are close to reality.

Bali is one of the ten best resorts in the world. All hotels on the island, as well as the best and most famous international chains Sheraton, Hilton, Ritz Carlton, Inter Continental, Radisson, Sol Melia, Nikko, and others, offer the highest level of service. Hotels are surrounded by lush gardens with lagoons, waterfalls, and fountains. To say that Bali – a resort only for wealthy citizens is a lie: the rest here for all budgets. The most inexpensive resort – Kuta, a democratic place with discos and nightlife, where the life boils until 3 am. And – it’s a real paradise for surfers, and not necessarily experienced, because there are no treacherous underwater reefs.

READ
What to see in Northern Ireland?

For a quiet beach holiday is perfect Sanur. The beaches here are protected by a coral reef, so the wave is not felt. It is one of the best places on the island thanks to the same reef. If the main thing for you is luxury and comfort, then your way, most likely, will lie in Nusa Dua. After all, this is where the most luxurious hotels in Bali are built. Nearby is the largest physiotherapy resort of international class – Talasso Bali center, which guarantees not only complete relaxation, but also a variety of truly heavenly pleasures. Competing in respectability with Nusa Dua can only Jimbaran, which also has hotels and villas luxury. And this is a fabulous beauty of sunsets, which attract romantics from around the world. Then they tend to go to Ubud, which stands somewhat apart from the seaside resorts, surrounded by pristine jungle, rivers, hills and rice paddies. The scenery of Ubud is recognized as one of the most beautiful in Asia and attracts artists and photographers from all over the world.

THROUGH TOWNS AND TEMPLES…WITH A STOP FOR SHOPPING

There are plenty of sightseeing excursions that let you get up close and personal with the island’s culture. For example, in Pura Besakih, one of the oldest and largest temple complexes in Bali, consisting of 30 temples. Or to Tanah Lot, a 15th century temple located on top of a cliff. Also visit the village of Batubulan – it is there that the famous barong dance, based on the eternal struggle between the spirits of good and evil, is danced. The story of love is conveyed in another national dance – kechak, which at sunset is performed at the temple Uluwatu. Those who are interested in old trades, will attract a trip to Ubud – the center of arts and crafts in Bali, and fans of shopping – a tour of Denpasar, the capital of the island. Souvenirs from Bali, by the way, you can bring countless – and silk umbrellas, and carved masks, and beautiful batik, and unique figurines of precious wood, and fine Balinese fabrics. In search of them do not necessarily go to major shopping centers. Bali beaches are full of sellers of all kinds of souvenirs. Their battle cry is, “Veri Chip!” They really are all fabulously cheap – a watch just like a “Rolex”, you can buy for two or three dollars. And the stores are full of quality things, and also at ridiculous prices for Russia. But even these prices are not final, bargain – and you’ll pay significantly less, sometimes three times.

Do not forget that Bali – SPA capital of Asia. Bali SPA – a whole ritual, performed in front of a blooming nature, with birdsong or the murmur of the sea surf. SPA complexes, combining centuries-old traditions and modern European technology, offer medical and cosmetic procedures using aromatherapy, mineral and sea water.

Bali seduces, charms, attracts and fascinates. Those who at least once visited the island of the Gods, probably felt the magic of this fairy tale island. You, too, are sure to feel it.