Climate and weather in Argentina

Argentina’s climate is as varied as the country itself. Stretching 3,700 kilometers from north to south, Argentina has a wide range of climates, spanning from the almost tropical climate of the north to the temperate climate of Buenos Aires and the Pampas, the cold and windy climate of Patagonia, and the sub-polar climate of Tierra del Fuego.

Argentina has a cold mountain climate in the Andes, an arid climate in the northern and central part, and a cold and snowy climate in the south. The northeast of the country receives abundant rainfall, and the extreme south has frequent snowfall.

We consider the best time to visit Argentina to be spring (spring in Argentina lasts from September to November) and fall (fall months are March-April-May), which is the most pleasant time between the winter lull and the hot and crowded summer. The weather during this time in Argentina is beautiful, and you don’t have to push tourists to take your best photos as you do during the high summer season.

However, don’t worry if you can’t tour Argentina when the best weather is in Patagonia or at Iguazu Falls – no matter the season, you’ll have the best days in this amazingly beautiful country!

Different regions of Argentina can have completely different weather at the same time.

And so as not to be disappointed if you find yourself at your destination at a completely inopportune moment, having traveled thousands of kilometers, we recommend you to determine the main attractions that you can visit during your holiday in Argentina.

During the winter season of the European calendar, Argentina has a hot summer. And it is the highest season, when thousands of tourists and residents of Argentina flee the heat on the ocean beaches. In summer, the coastal waters of the Atlantic Ocean in the north and northeast of the country warm up to +25 °C, and the average air temperature is about +30 °C, often exceeding this mark.

Autumn in Argentina begins in March with warm weather after a hot summer for a month or two, essentially extending summer for a couple of months more. This is the best time to travel throughout the country.

Temperatures are around +14 °C in the southern parts of the country and a comfortable +22 °C in the north. However, you should prepare for frequent precipitation by taking clothes suitable for the European autumn.

The nature of Argentina at this time is repainted in bright blazing colors, so many tourists prefer to go on tours at this time.

During the winter season in Argentina are open numerous ski resorts.

The real winter comes to Argentina in the second half of June, when the trees lose their last leaves. The south is then hit with snowdrifts and bitter frosts.

Argentina’s spring coincides with the European autumn. September is usually quite dry and warm, with average temperatures of about +25 °C in most of the area and about +15 °C in the southern part.

Spring is the best time to visit Iguazu Falls.

Temperature in Argentina by month 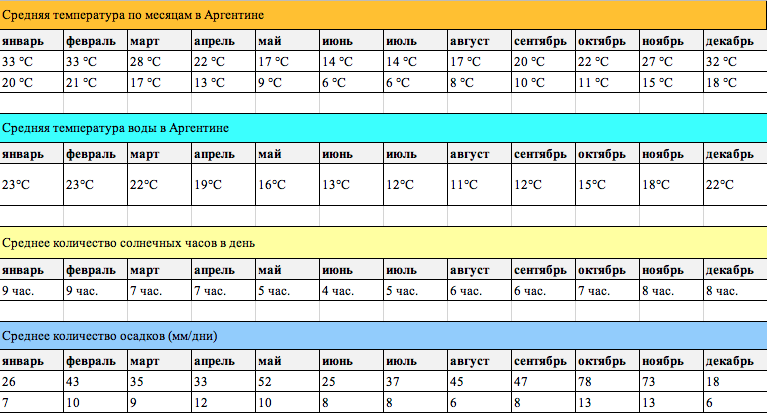 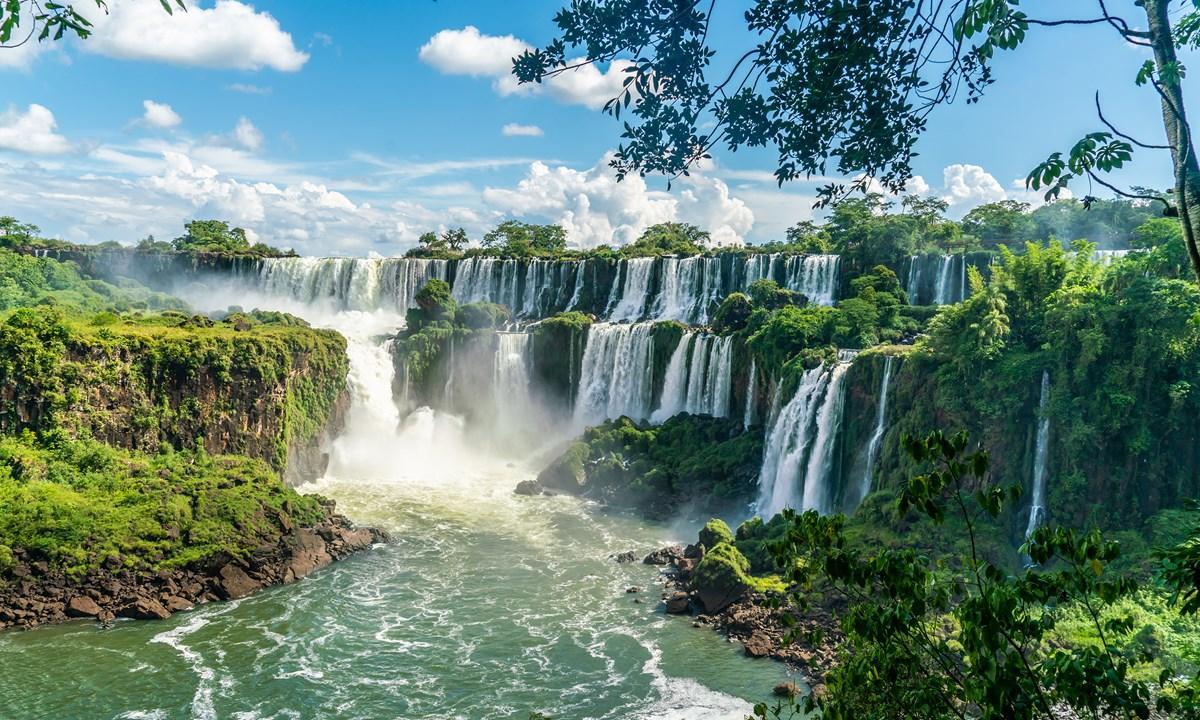 The weather in Buenos Aires lacks the extremes found in other parts of Argentina, with an average annual temperature of +18ºC.

The best time to visit the city is during Argentina’s spring with flowering trees (in October and November) and Argentina’s autumn months (March to May).

In December and January, it gets very hot and humid, during which time many locals leave the city for vacations.

However winter in Buenos Aires is not too cold, so any time of year is a good time to explore the city.

Weather in Buenos Aires by month 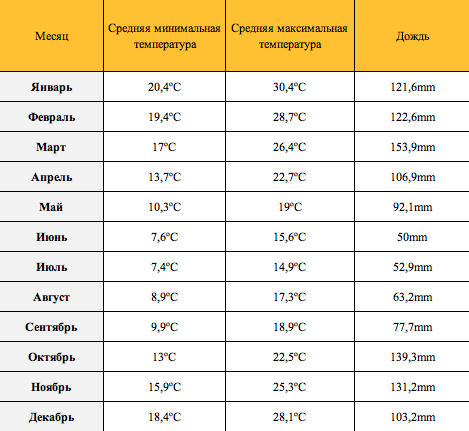 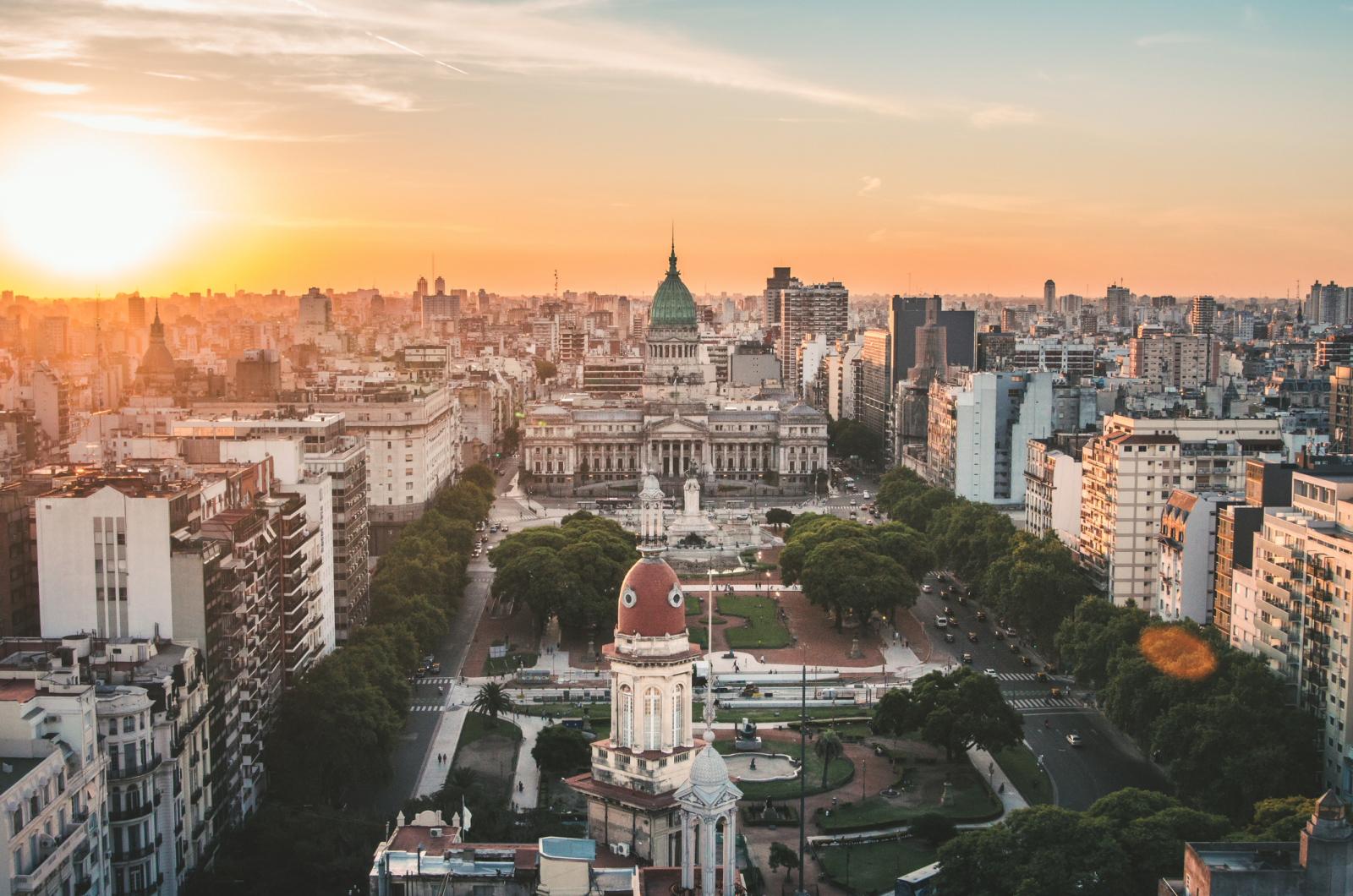 Weather in Patagonia and other regions of Argentina

Climate and weather in Patagonia

Patagonia is the most climate and seasonally dependent region of Argentina.

You are not immune to the fact that when you arrive in high season, you will find no vacancies in hotels, and just a couple of months later in the same places may be replaced by the ad “Closed for the winter. Therefore, it is worth booking a tour in advance, freeing yourself from unforeseen situations.

To visit Patagonia tourists begin in September – October, despite the rather cold weather. You can take advantage of this moment to visit the huge Perito Moreno Glacier in not the largest company of other tourists.

November is a time of blooming Patagonian nature, when the influx of tourists is still minimal.

Patagonia’s high season begins in mid-December, lasting until late February. During this period, Patagonia has the longest days and the most favorable weather conditions. But it is during this time of the largest influx of tourists, vacations are the most expensive, in addition, January is a popular month of vacations for Argentinians themselves.

March and early April are also considered great months to visit Patagonia, the weather is still good, the crowds of tourists have left one of the main attractions of Argentina, and the fall colors make the landscape particularly impressive.

Patagonia’s low season runs from May through August, and many establishments are closed during this time.

However, winter sports enthusiasts can head to Patagonian ski resorts, such as San Carlos de Bariloche, during this period and enjoy great conditions!

And the main rule of visiting Patagonia is to always be prepared for rain and wind, no matter what time you go there. Argentina’s harsh climate is at its brightest here!

Climate and weather in Iguazu

The Mighty Falls of Iguazu represents Argentina’s tropical climate, so the dry and rainy seasons are pronounced here.

The best months to visit Iguazu Falls are April-May and September, during which time there are far fewer tourists at the falls and the weather is bearable with bright rays of sunshine.

From December to March there are high temperatures and humidity, so this is not the best time to visit, and many trails are closed. However, heavy rainfall makes the waterfalls even more impressive and rumbling.

Salta’s provinces can be visited year-round.

It can rain heavily in the summer and temperatures are high, but it cools off a bit at night.

In the spring and fall, the temperature is comfortable and there are significantly fewer tourists. In addition, spring is the time of flowering of trees and plants.

In winter, it gets quite cold in the mountains, but it almost never rains and the arid red landscapes resemble the landscapes of the Wild West. 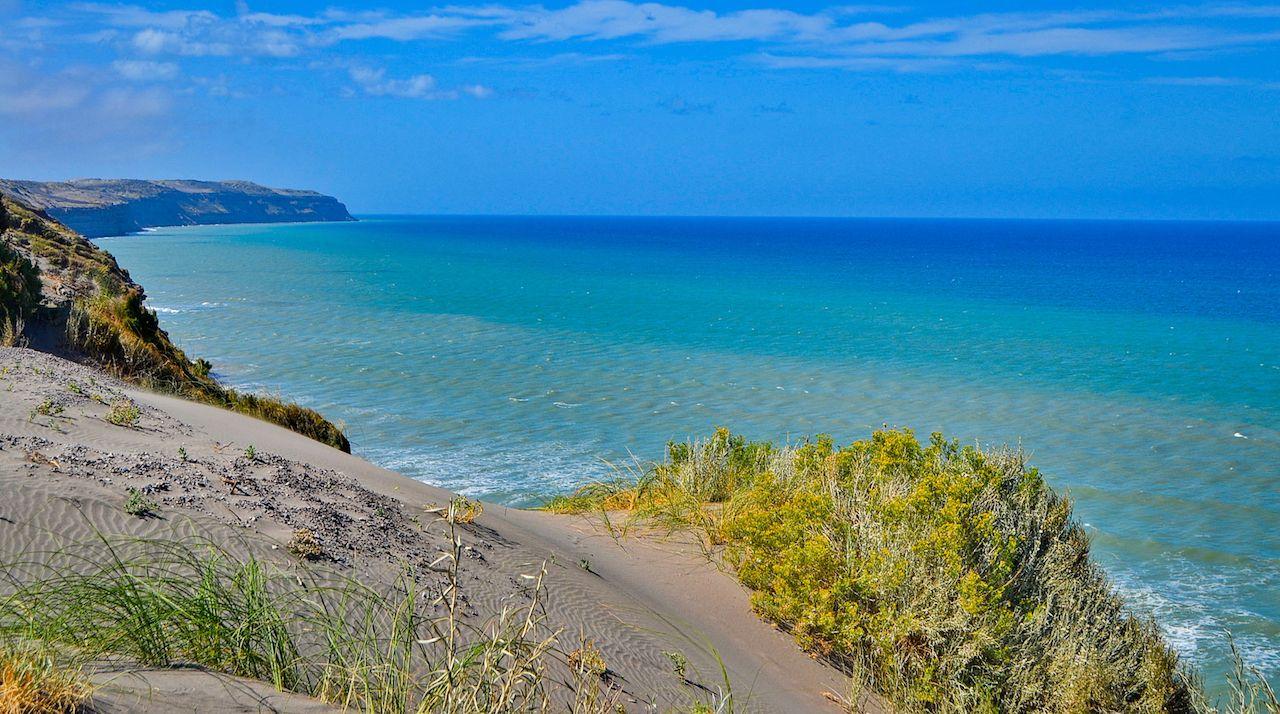 Best time for a beach vacation

Argentina offers a wide variety of beaches on the eastern coast, washed by the Atlantic Ocean.

The best weather conditions for a beach holiday in Argentina can be found from December to February.

But keep in mind that these are the months of Argentine summer, so they are also the most popular period for Argentine vacationers, making the beaches incredibly crowded.

Choose the right tour to Argentina for you or describe your wishes and we’ll help you put together your customized tour!