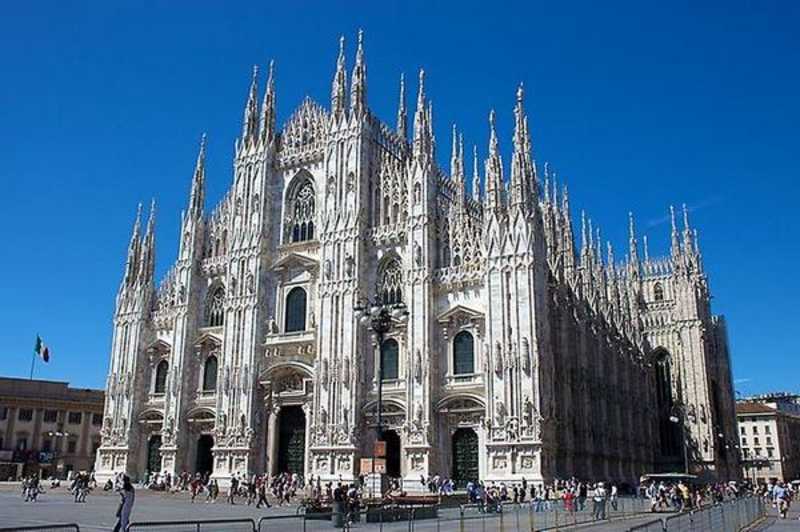 This style appeared on the basis of Romanesque buildings with their characteristic thick walls, small windows, semicircular heavy doors, massive pillars or columns and barrel vaults. 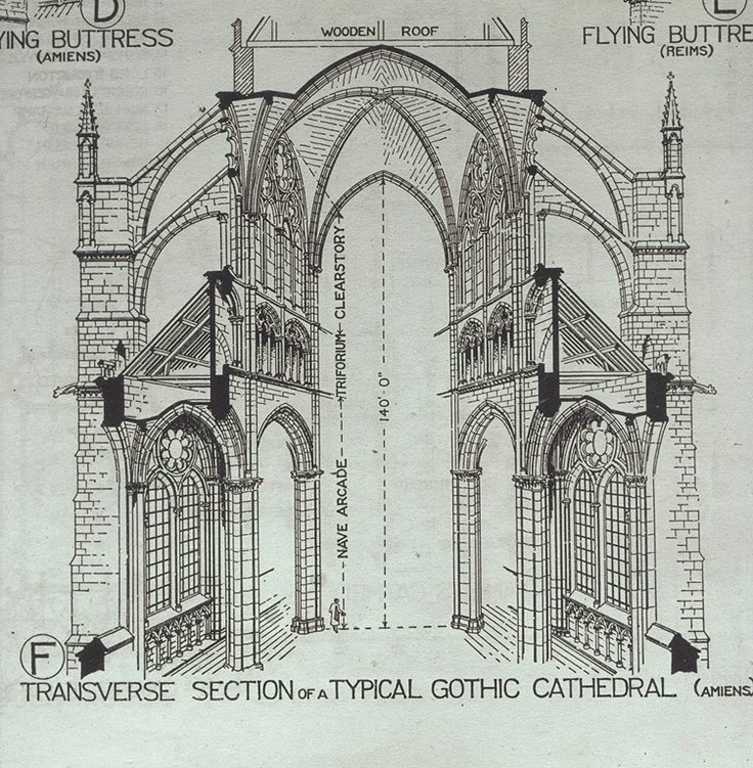 Gothic architecture emerged from the discovery by architects of a fundamentally new method of distributing the load on a building. When it was established that the mass and pressure of masonry could well be concentrated in a few calculated points, the other components of the structure need not be supported.

The new approach in construction was that the cylindrical vault was replaced by a fan vault by means of special structures: ribs – protruding ribs of the frame vault. It was called a ribs vault. 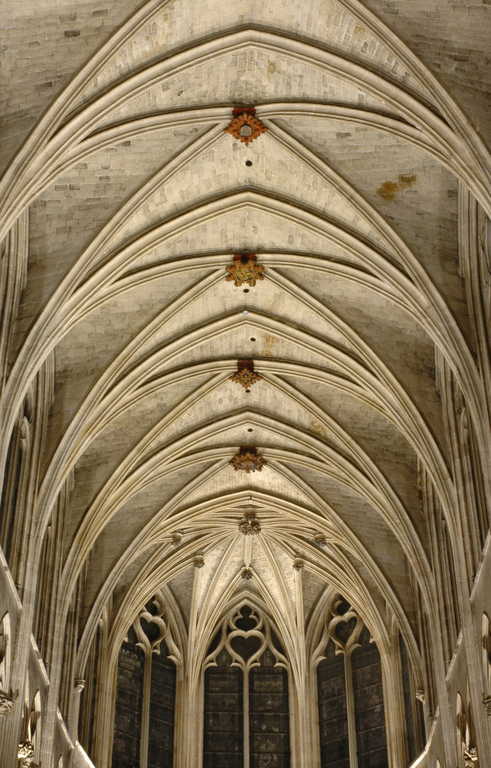 On the basis of the framework system of Gothic architecture appeared the possibility of building the highest buildings with huge space, lots of light, high columns and towers, oblong arches and facades decorated with carvings. Started to build Gothic temples, exceeding the height of the Cheops pyramid, which in Europe at that time was considered the highest building on earth.

The evolution of the Gothic style in architecture can be divided into three stages:

The year 1135 can be considered the birthplace of Gothic. The Archbishop of Sansa in Burgundy decided to build a new temple instead of the old Romanesque one, in which the projecting ribs of the vault were decorative. In the new cathedral, they began to serve as supporting structures at the same time as the arches.

At about the same time, the reconstruction of the Cathedral of Saint-Denis, near Paris, the tomb of the French kings, began. Elements of the new style borrowed from the cathedral at Sansa were used in the work. It was this fact that triggered the spread of Gothic, as a French style, to the neighboring regions (west and center of Europe), as well as to Syria, Rhodes, and Cyprus.

Ironically, Germany adopted this style later than others, though the style takes its name from the tribes which inhabited its territory: the Goths.

You can recognize the Gothic style from its pointed arches, ribbons, traveys, buttresses and arc-butanes. Just two minutes of video will show you what these elements are.

The frame system of Gothic architecture is a distinctive feature of the style. Its characteristic features are. 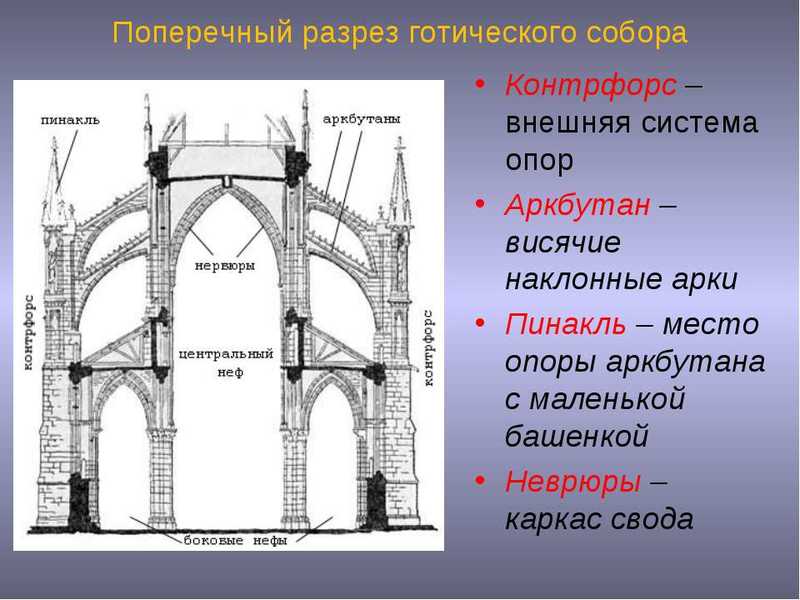 On the basis of the latter, 19th-century French art historians tried to classify Gothic styles. The term “rayonnant” (fr. Rayonnant – radiation) was established to describe the radiating spokes of rose-shaped windows. It is used by contemporary art historians.

Take a moment to take a closer look at the Gothic vaulted towers of the Torres de Serranos in Valencia, Spain:

The construction of majestic Gothic structures was impossible without iron tools, saws, blocks, and large wheels to lift materials to height. The presence of lead, the plates of which covered the roofs, was required. All these conditions became possible on the territory of Europe in the 12th century.

Giant sacral structures required stone, which was often brought from distant quarries. The process of building Gothic masterpieces lasted hundreds of years. We can see it in the paintings of medieval painters Jan van Eyck and Pieter Brighel Sr.

The Dome Cathedral in Milan

The perception of the Gothic was very ambiguous. The founders of the Italian Renaissance, Brunelleschi and Donatello, were inspired by this style in their work. And at the same time, the Gothic was perceived as artificial, detached from nature, and therefore considered a symbol of the dark and backward.

READ
Famagusta - The most interesting city in Cyprus

Molière called Gothic cathedrals “monsters” and “traces of ignorant years”. And Vincent Sablon sings of it in his poems. The perception of the Gothic in a fantastical halo of mystery during the Romanticism period of the 18th and 19th centuries led to a rethinking of the philosophy of medieval architecture.

Art historian Professor Erwin Panofsky (1892 – 1968) in his work “Gothic Architecture and Scholasticism” gives a detailed explanation of the evolution of the Gothic on the basis of the development of European medieval philosophy, which was concentrated around university centers and represented a synthesis of Catholic theology and the logic of ancient Greek Aristotle. He argues that both developed according to the “idea-opposite-answer” principle.

Read the article Gothic Cathedrals of the Middle Ages, which describes the most famous cathedrals that exemplify this style.

Do you think the Gothic style in architecture is something monstrous? Write your opinion in the comments. Is there an architectural Gothic near you? Share the knowledge with your friends on social networks. Rate the article by selecting the desired number of stars below. 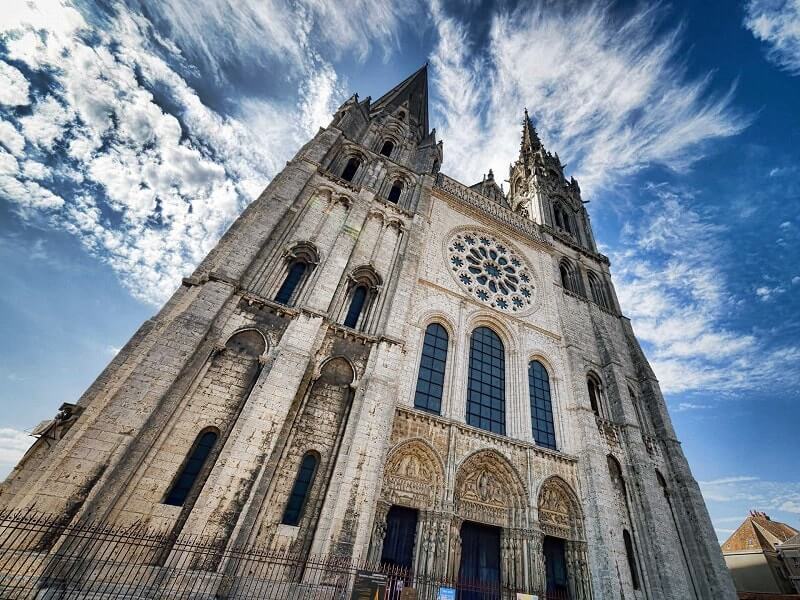 Majestic and mysterious, the Gothic style became a bright symbol of European architecture of the Middle Ages. It combined the severity of stone, lightness of glass and brightness of stained-glass colors. Poised upward pointed towers, weightless semi-arches, strict vertical columns and even pointed upward window openings – all this demonstrates the desire of mankind to the sky, the sublime, the boundless. Gothic style in architecture – Chartres Cathedral (France)

The main features of Gothic architecture

Gothic architecture is easily recognized by the following features:

READ
Itinerary for Bergamo and surroundings in 7 days, Italy

History of the style.

The development and prosperity of Gothic architectural direction historians attribute to the Middle Ages (XII-XVI c). The homeland of the style is considered the north of France, where it gradually spread throughout Europe. Gothic came to replace the Romanesque style, gradually replacing it. First, a new direction shows itself in the architecture of buildings (monasteries, temples and churches) with a cult, religious affiliation. Over time, the Gothic style extends to civilian buildings (palaces, houses, administrative buildings). 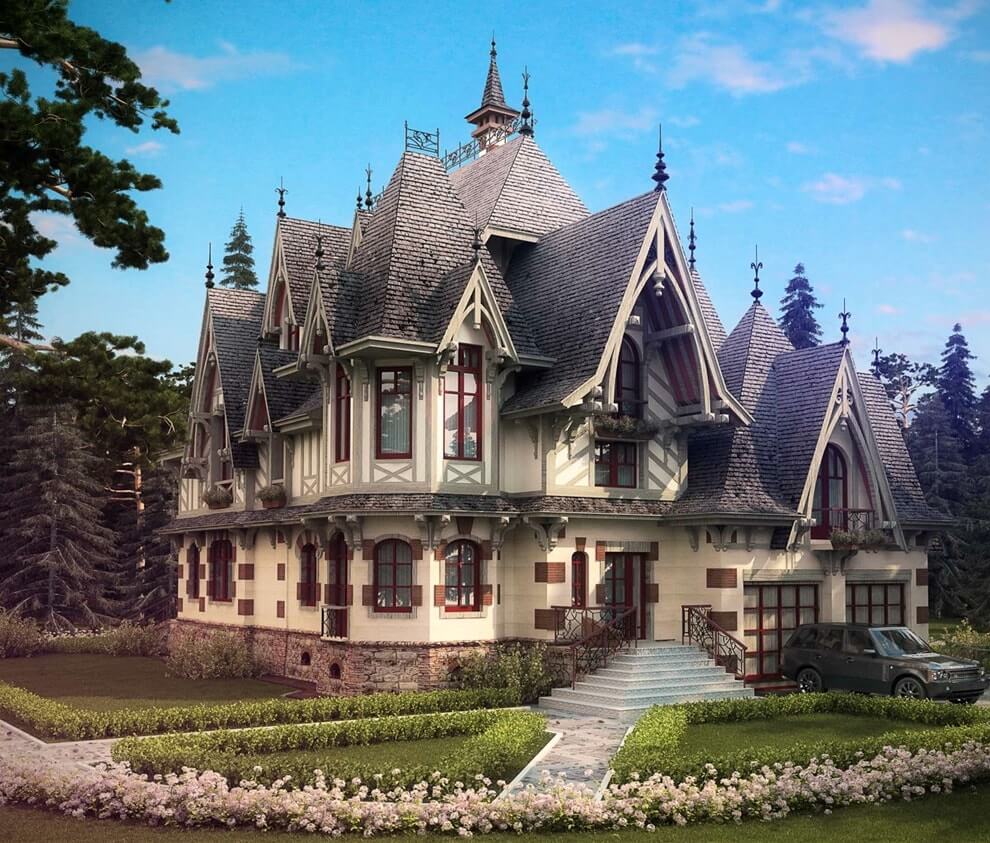 Currently, against the backdrop of the trend to create comfortable conditions for suburban living, the requirements for the architectural execution of buildings are constantly becoming more complex. One of the popular directions in this area has become the Gothic style, which gives many interesting ideas. But it is worth noting that it is not suitable for everyone. Cottage in the Gothic style – is exclusive, made to order by the individual owner. Moreover, you need to be prepared for the fact that such a building will always be in the spotlight.

Materials for building in the gothic style

To build a modern house in the Gothic style is not necessary to build a medieval castle in full size. It is enough just to adhere to the canons that give the desired stylistic orientation. The main material for building houses in the Gothic style is natural stone. However, if necessary, it can be replaced by more accessible materials (bricks, blocks). And to give the facade an appropriate look will help decorative plaster and panels imitating stone. 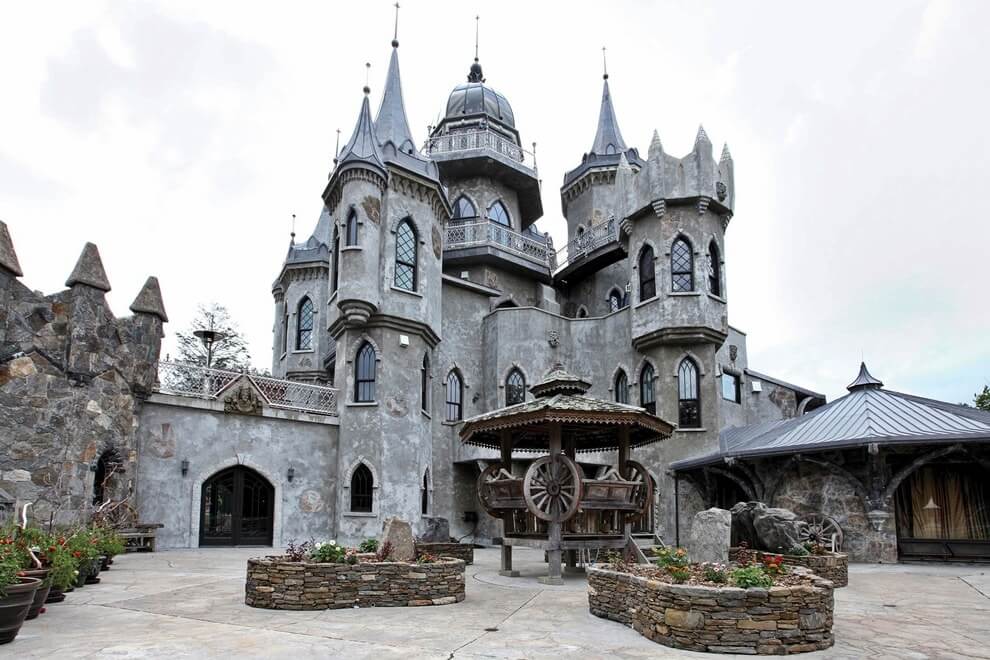 The first thing that attracts attention in the buildings of the Gothic type is a complex, high, multi- sloping roof, pointing to the sky. It is harmoniously supplemented by dormer and dormer windows, as well as spires and domes, reminiscent of towers (pinnacles). Given the significant angle of slope, as a roofing material is most often used tiles (metal or asphalt). To visually increase the height and strengthen the vertical orientation, pointed wrought iron elements are an important part of the external decoration.

The main characteristics of a Gothic-style facade are:

The key color of the Gothic style is traditionally purple, representing the unity of the earthly (blood-red) and heavenly (blue). Now it is in dim, restrained tones, is used mainly for decorating the roof. Suitable for facades are solid, discreet shades of light gray, clay brown, camouflage green. The main colors of stained glass in the Gothic style are red, blue and yellow. Expressive contrasts are created by using white or black colors.

For the Gothic architectural style is characterized by the use of numerous decorative elements. These can be bas-reliefs, small sculptures, pilasters, balustrades (railings), stylized wrought iron ornaments. Heavy and massive plaster parts typical of medieval castles, are now successfully replaced by lightweight counterparts from the facade of polystyrene foam or foam plastic with the appropriate coating.