Antelope Canyon is one of the “tributaries” of Glen Canyon. A stream that dries up in the summer flows through it into the Colorado. A few miles from its mouth, the creek forms two stunning canyons. They were discovered by chance by a Native American girl on a quest to find a lost goat.

From above, the canyons are inconspicuous, just so, a narrow groove in the ground, about 40-60 inches wide. But under the ground, the water has dug the red-orange rocks to a depth of 3 to 6 meters. The walls are bizarrely shaped, licked by water, with washed-out half-caves and grottoes. Light penetrates through a narrow gap at the top, repeatedly reflected from the orange limestone, creating unlikely shimmers and shades, shadows and penumbra. Here and there you can walk through freely, there and there you have to climb.

Both canyons belong to one of the Navajo clans. Of course, there is a separate fee for each canyon, and not a small one at that. You won’t get any services for your money-no toilets, no coke stand, not even a prospectus-but despite your indignation at “Navajo people,” the canyons will blow your mind. They are different from each other: the lower one is not as deep, but more intricately shaped. The upper one is up to 6 meters deep, the bottom is almost dark, and you can walk along the sandy bottom.

Antelope Canyon lies four miles east of town on Highway 98, between the town of Page and a large coal-fired power plant. You can’t miss the power plant; you can see it from dozens of miles before you reach the town. There are signs for Upper Antelope Canyon and Lower Antelope Canyon, but these are not standard U.S. road signs, but rather hand-drawn signs, so you can easily miss them. The thing to remember is that if you go farther east than the power plant, you have to go back. There is a small shack and bulletin board by the road leading from Highway 98 to Upper Canyon, and this can serve as another additional reference point.

The best times to visit are in spring and fall: March-April and October-November. During this time, the sunlight penetrates all the way to the bottom and the canyons look as if a bright light is burning inside the dark palace, but don’t turn down a trip in winter for fear there will be nothing to see or problems with access. In winter, the lighting in the canyons is quite low – it’s quite dusky inside, with deep shadows and flat reliefs. Pictures taken in Antelope Canyon are especially eye-catching and will take a prime place in your American album.

The best time to take pictures is in the middle of the day, when the sun is at its zenith. For the Lower Canyon, the preferred time is before noon and just after (10 to 11 or 1 to 2 pm), and for the Upper Canyon, the best time is around noon, from 11 to 1 pm. This is because the Upper Canyon is deeper and has less light, while the Lower Canyon gets too much direct light during the afternoon and the magic is lost.

How to get to Antelope Canyon

There are some Indians on duty at the hut, gathering the group for the canyon tour. You can pay them a fee to enter the reservation and pay for a guide at the hourly rate. The fee in 2002 was $3 per person. For this fee, an Indian will take you in a jeep three miles south, along the sandy bed of Antelope Creek, to the canyon. However, it may turn out that the Indian guide will take the group on a tour, and then you will have to wait for him at this hut. This is probably the easiest and least expensive way to visit the canyon.

There are several tour operators in Paige City who are involved in showing Antelope Canyon. You can contact any of these companies and arrange a tour of the canyon. For example, Antelope Canyon Adventures (http://jeeptour.com, 928-645-5501, fax: 928-645-3155) . The firm is located on Safeway Plaza . Lake Powell Boulevard is Paige’s main street. It overlooks Highway 89. It has two large plazas, Safeway and Walmart . Safeway Plaza is at the intersection of Lake Powell Blvd and Elm St . They have hour-long tours at 10, 12, and 2pm .

The hour-long tour is actually an hour and a half, with the group spending one hour in the canyon itself and a half hour spent driving from Page to the canyon and back. An optional three-hour tour is also offered for photographers.

Because the canyon has very sharp variations in light and shade, the conditions require extra time to set up the equipment and take the pictures themselves. The one-hour tour costs $29 per person, and the three-hour tour costs $45 with all fees, taxes and Indian duties.

Honestly, even amateur photographers one hour in the canyon is not enough, you will have to do everything at a pace and there will be no time left for just looking at the beauty, so if you are not in a hurry, I recommend choosing the multi-hour tour. The first way or the second, it’s up to you.

Antelope Canyon is the fire trails of the Navajo Indians. USA

Antelope Canyon is a stunning and unrealistically beautiful landmark of the American state of Arizona. The whimsical curves of sandstone shimmer with incredible colors and make one forget that they are on Earth. 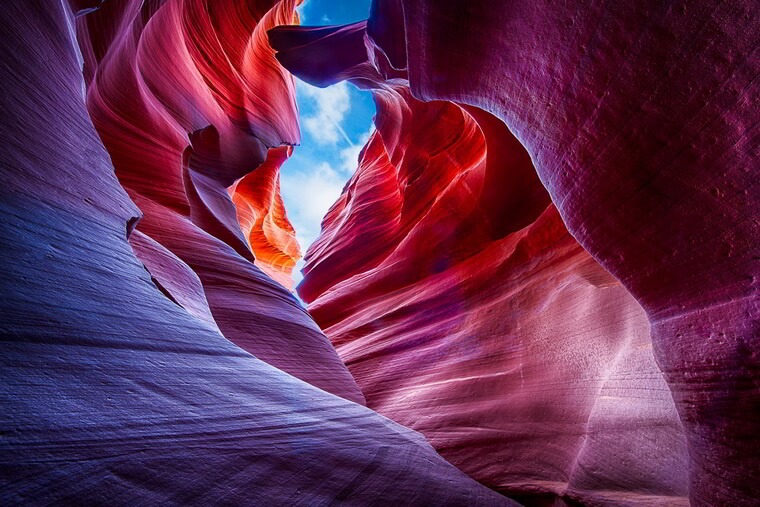 Where is Antelope Canyon

What does Antelope have to do with it?

The canyon got its name because of the resemblance of the color of its almost red walls to the color of the antelope’s skin. Over the years, rains and floods have cut through the red-red sandstone for hundreds of meters, creating large (and not so large) crevices.

You see a particularly bizarre landscape on a bright sunny afternoon. The rays penetrate inside the canyon down to the bottom and, reflecting off its walls, create unreal beauty. Many photographers of the world hunt for it (like an antelope). 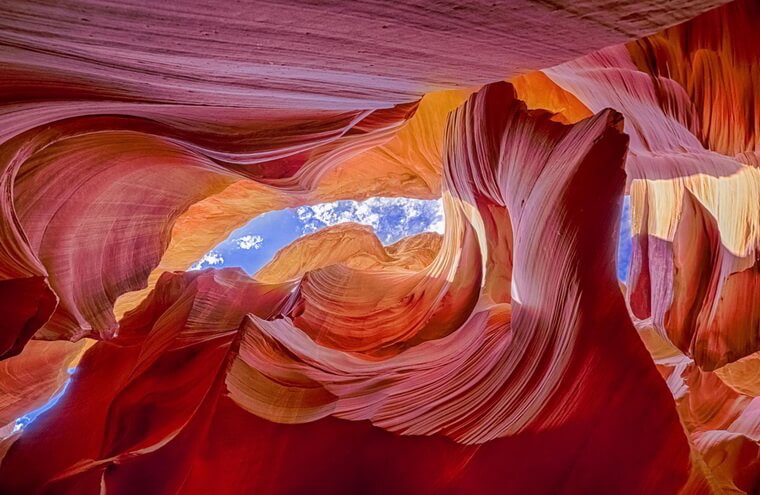 It is an interesting fact that the ethereal colors of the walls are at their best in the photographs. But “live” Antelope Canyon looks less impressive.

Antelope Canyon includes two separate sections. They are located 6 kilometers apart and are called Upper Canyon and Lower Canyon, respectively. Both are on territory owned by the Navajo Indian Tribe.

It is often referred to simply as “Crack”. But the Indians call it Tse bighanilini. From the Navajo language it translates as “the place where the water passes through the rocks. The length of the Upper Canyon is more than 200 meters, and a depth of about 37 meters.

This is the most visited area by tourists.

First, the entrance to it and all the way is at ground level. That is, you will not need to overcome the ascents and descents. 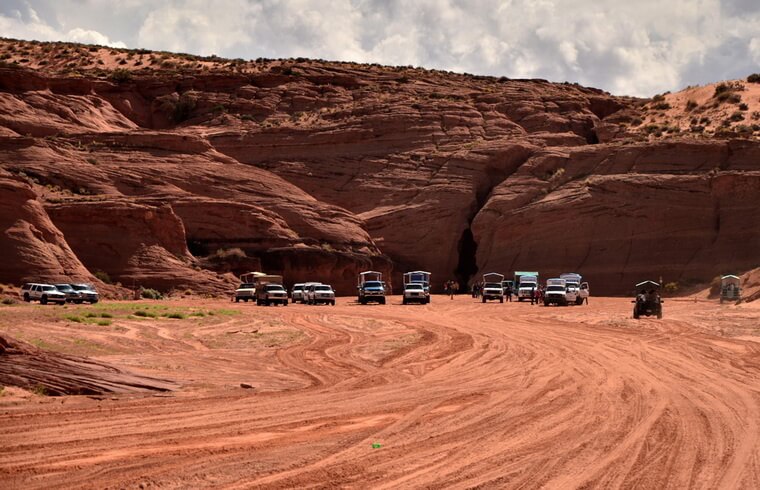 Secondly, this is where the most spectacular photos are taken. Because the sunlight gets in much better than in the Lower Canyon. 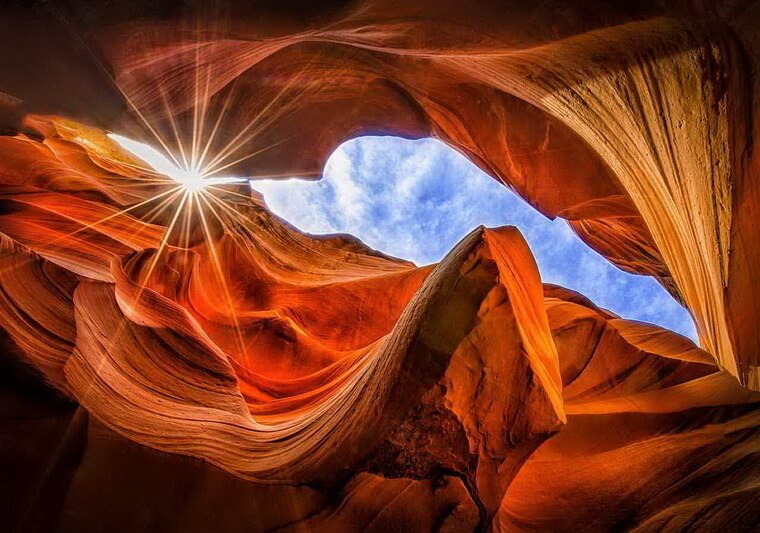 As early as March 20, the rays begin to pass inside the canyon, and on October 7, the color and light spectacle is complete. Naturally, the summer months are better for visiting. Antelope Canyon looks less impressive in the winter. The colors are more muted because of the decreased light output.

READ
What to see in Vienna in winter

This section is known as the “spiral” or “corkscrew.” The Indians call it Hazdistazi, which means “spiral rock arches.” It lies six kilometers north of the Upper Canyon.

The hike up it is more difficult and dangerous. You’ll have to go up and down the stairs. And this is good, because before they were just ropes and unreliable rope ladders. The landscape here is more twisted and narrow. In some places even just to stand on your feet is problematic. 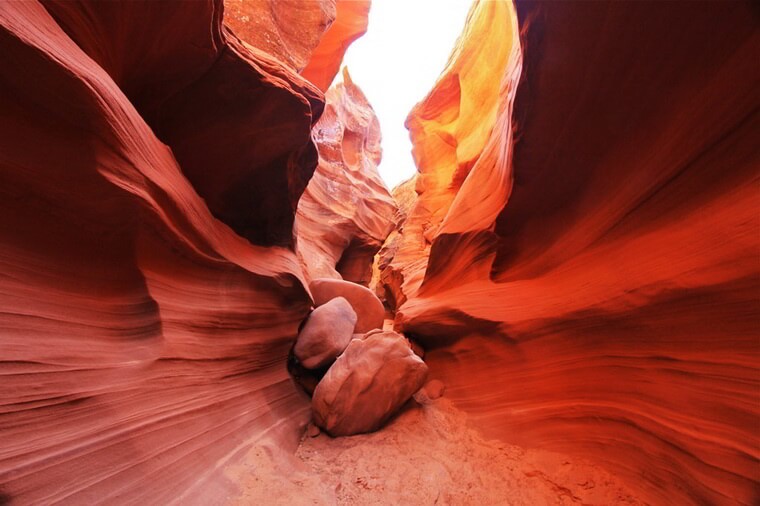 There are currently five flights of stairs available. 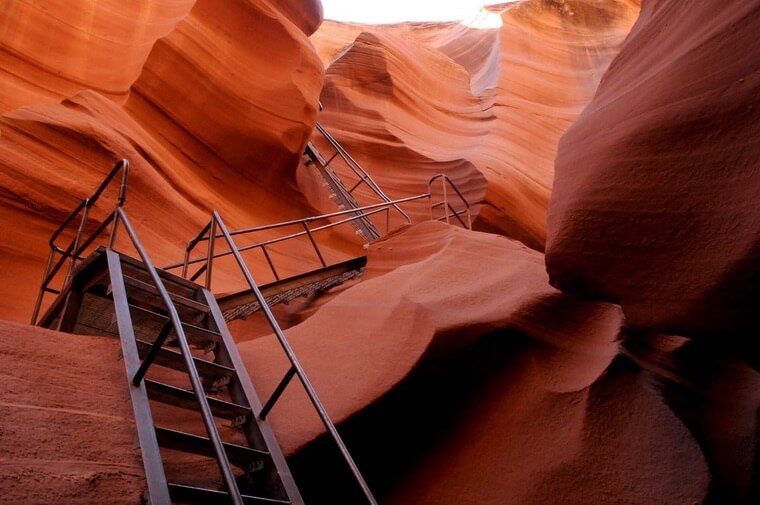 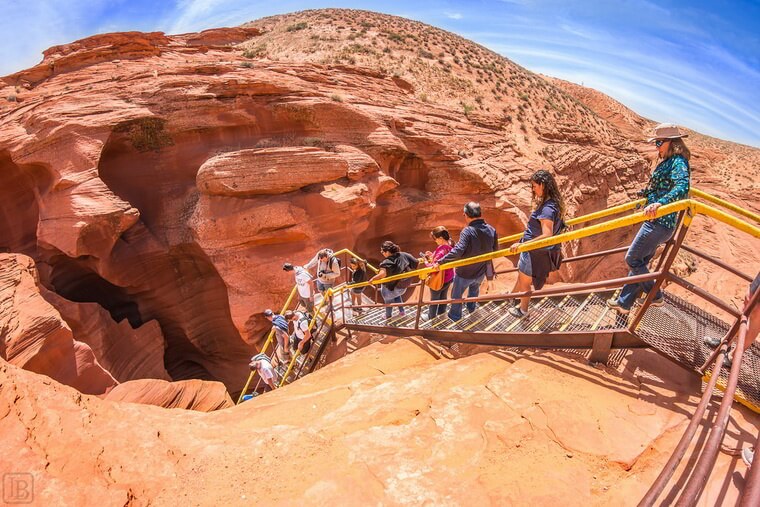 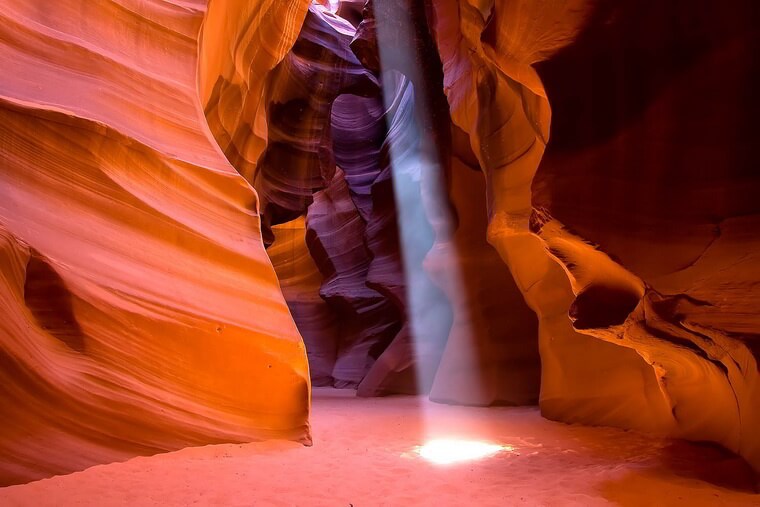 Antelope Canyon was formed through a natural process of erosion. The local sandstone is constantly exposed to wind and water. Rainwater, especially during the monsoon season, travels through the canyon, eroding the earth’s surface. The wind, in turn, also helps – it lifts the sand and smooths the edges like sandpaper. As a result of Nature’s work, we see characteristic wave-like shapes. 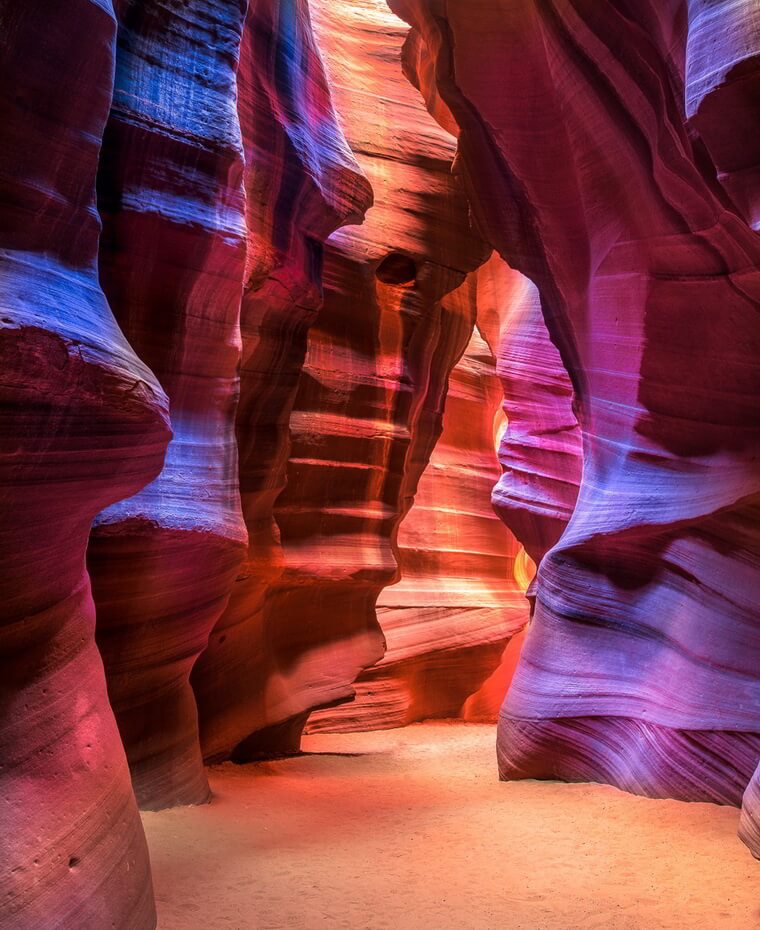 This place is incredibly popular for professional photographers and ordinary tourists alike. It is worth remembering that this is Native American territory. Entrance to Indian lands to the canyon became available only since 1997. Since the end of the last century, the Navajo Indian Park has been organized here.

Visiting the canyon is allowed only as part of tour groups, and only when accompanied by licensed guides. You cannot visit Antelope Canyon on your own. All travel is under the supervision of a guide.

READ
Romania - home of the story of Count Dracula

Do you want an unforgettable trip. Antelope Canyon guarantees it.

Antelope Canyon has an official website – https://www.antelopecanyon.com/ . Here you can find out the time and cost of the tours.

Backpacks are not allowed in the canyon, as the fragile sandstone structure can be damaged by them. In addition, the group consists of several people, and the passages are quite narrow. So with backpacks you will just get in each other’s way.

Twelve kilometers to the west is an amazing observation deck with a great view of the stunning curve of the Colorado River. It is free to visit, but it is self-guided. 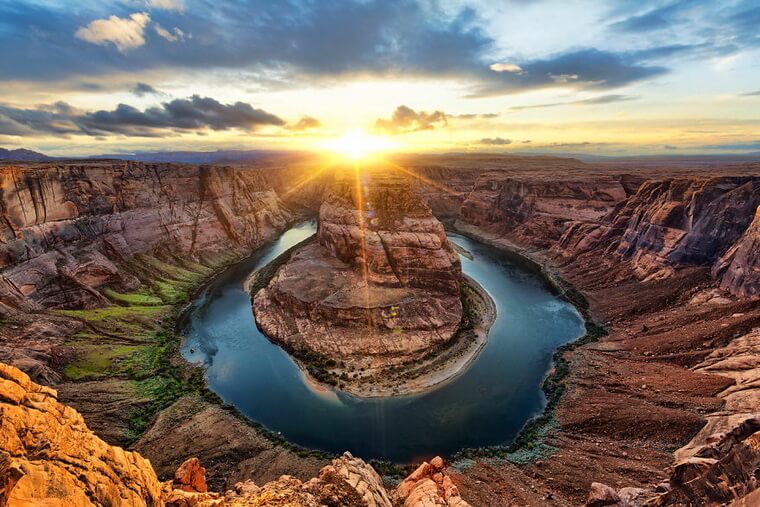 It is imperative that all tourists be informed of the dangers of Antelope Canyon. These are poisonous spiders and snakes that can be encountered along the way. Most importantly, flash floods can occur during the rainy season. Even with the slightest suspicion of thunderstorms and rain, visiting the canyon is strictly forbidden.

In October 2006, there was a major flood that lasted a full 36 hours. After that, hiking in the Lower Canyon was banned for 5 months.

On July 30, 2010, several hikers were trapped in the Upper Canyon during the flash flood. Some were rescued immediately, while the rest had to wait for the water level to drop. No one was killed.

A tragic incident occurred in 1997 in Lower Canyon. During the flood, 12 tourists got into the rough stream. Only 1 survived. It was the tour guide himself.