Amritsar is a city in the Indian state of Punjab and is home to the magnificent Golden Temple, the main sanctuary of the Sikh faith, built in the 16th century by Guru Arjan Dev.

Save on a trip to Amritsar!

Amritsar is home to the greatest Sikh shrine, the Golden Temple, founded in 1577 by the fourth Sikh guru, Ram Das . The Gurdwara, towering above the calm waters of a small picturesque lake, shines with a golden sheen that attracts millions of pilgrims from all over the world. This place, so unlike the bustling chaos of India’s bazaars, attracts many tourists, most of whom cite it as the most important point of their trip to India. Unfortunately, the same cannot be said of the overcrowded streets of the city! The traffic congestion (especially in the densely populated old neighborhoods) and the stench of exhaust fumes are completely exhausting.

The Mughal emperor Akbar himself chose the site for building the city, but in 1761 the Afghan ruler Ahmad Shah Durani seized and looted it, and razed the sacred temple to the ground. It was rebuilt in 1764 and in 1802 Maharaja Ranjit Singh covered it with golden copper Maharaja plates – the temple became known as the Golden Temple.

During the riots in Punjab in the early 1980s, separatists who wanted to create an independent Sikh state seized the Golden Temple. They were knocked out by the Indian Army in 1984 in a military operation with terrible consequences: the temple was damaged, which led to violent clashes between Hindus and Sikhs in Punjab, which in turn led to the death of several thousand people (mostly Sikhs).

Not far from the Golden Temple the Jallianwala Bagh Park has been laid out in memory of the Indians who were killed or maimed here, on this very spot, by the British authorities in 1919. You can still see bullet holes in the memorial wall, just as you can see bullet holes in the walls of the well where desperate people jumped to escape the lead. In the park, the eternal flame of remembrance burns. There is also the Martyrs’ Gallery (6 a.m. – 9 p.m. in summer, 7 a.m. – 8 p.m. in winter) – eyewitness accounts and photographs will reveal the truth about the Jallianwala Bagh massacre.

READ
Top 5 Restaurants with a Spectacular View of Dubai

On the territory of Ram Bagh Park is an amazing panorama of Maharaja Ranjit Singh dedicated to the “Lion of Punj6a” (1780-1839) . On the second floor is a panorama of colossal size with sound accompaniment (imagine people’s shouts and horses roaring as they do in battle) . It depicts battle scenes, including the capture of Fort Multan by the Maharajas in 1818. Children especially those who are interested in military affairs will find it very interesting. On the first floor is an exhibition of paintings and dioramas.

No shoes are allowed to enter and cameras are not allowed.

The temple of mata

is open from dawn till dusk

This Hindu cave labyrinth temple is a reminder of the woman who lived in the XX century – Saint Lal Devi (Lai Devi). Women wishing to become pregnant come here to pray to her. The circuitous route to the shrine is through caves filled to the ankles with water, through low tunnels, stairs, passages and dungeons, the last of which turns out to be a spacious cave.

is open from dawn till dusk

The temple is dedicated to the Hindu goddess Durga. This 16th century structure, surrounded by a sacred lake, somewhat reminiscent of the Golden Temple of the Sikhs. It is sometimes called the Silver Temple because of its carved silver-plated doors. Visit the temple during bhajan (religious chanting) – daily from 7:30 to about 9:30 and from 6:30 to 8:30 pm.

Sanjay of the Grand Hotel will offer you interesting and advantageous excursions that include a visit to the Atgari Wagah border closing ceremony, the Mata Temple and an overnight visit to the Golden Temple, from 500 rupees per person. One day tours include visits to the Golden Temple, Jallianwala Bagh Park and the Durgian Mandir Temple. Individual tours to Dharamsala, Dalhousie and Manali are also available.

Most of the cheap hotels in Amritsar are in the bustling market in the old town near the Golden Temple. Stock up on earplugs!

Amritsar is known for its dhabas (dhabas; eateries) like Punjab Dhaba (Goal Hatti Chowk), Kesar Da Dhaba (Passian Chowk) and Brother Dhaba (Town Hall Chowk); all are predominantly Indian and all have thali dishes, price range from Rs 65 to Rs 110; open from early morning to late evening. Brothers’ is considered a favorite. Hotels and restaurants near the sacred Golden Temple do not sell alcohol; elsewhere, beer may be hidden in a paper bag.

The town is also famous for its special dish ‘amritsari’ (fish with lemon, chilli, garlic and ginger in a deep fryer); the stalls where it is served are not hard to find by smell (there are especially many in the old town) .

If you feel like wandering through the narrow streets of ancient Indian markets, be prepared to get lost in your own senses. Amritsar has stores for every taste, selling everything from religious paintings to jootis. The best place to sell jootis is around Gandhi Gate, also called Hall Gate. The cheapest jootis can be bought here for Rs. 200. At the Katra Jaimal Singh Bazaar you can buy salwar kami and sarees, and stores selling more modern clothes along Lawrence Rd and Mall Rd.

Cyber Swing (Old Town, 40 rupees per hour; 9.30am – 10pm) On the top floor above the Punjabi Rasoi restaurant.

ATMs pop up like mushrooms after the rain in Amritsar:

Directions there and back

READ
The most expensive places in the world to vacation

Private buses offer the same or higher fares. There are daily buses to Delhi from the nearest train station at 10 p.m. Other private buses, including those to Chandigarh and Jammu, depart from Gandhi Gate.

In addition to the noisy ticket booths at the train station, there is another ticket booth (8 a.m. to 8 p.m., Sat. to 2 p.m.), and it is located in the Golden Temple.

Getting around the city

The holy city of Amritsar, India.

Amritsar is a sacred city of militant religion, a place of battles and pilgrimage. The city of Amritsar is constantly in the thick of events, most often in military and religious conflicts. It is named after Amrit (“nectar of immortality”), which fills the lake of the temple complex Harmandir Sahib, better known as the Golden Temple, one of the most beautiful sights in India.

We entered the city of Amritsar in the afternoon and immediately plunged into the crazy rhythm of the city. A crowd… no not that… HUNDREDS of people, a chaos of cars, motorcycles, mopeds, rickshaws, bicycles, vendors of “something”. And it’s all moving, turning, rushing, driving, running. And the sounds! The relentless “bee-bee,” “bee-bee,” “bee-bee,” “brr”-all honking. This is a kind of language: I turn, I’m going to overtake, where did you go! The brightness of colors also amazes: colorful saris for women and colorful turbans (the correct name – dastar) for men.

READ
The 5 oceans of planet Earth

Amritsar (northwest India, Pinjab state) is the holy city of the Sikhs (you can read about Sikhism in the article Sikhism – the religion of the good people). Amritsar was founded in 1577 by one of the gurus of Sikhism. From 1716 until 1849 the city was the center of the Sikh state until the state was destroyed by the British. Since 1947 several serious conflicts (between Muslims and Sikhs, separatists and the army) have erupted in Amritsar. After all, when the partition of British India into India and Pakistan occurred, half of the city’s residents, all Muslims, had to move to Pakistan.

2 | Amritsar – the holy city and the Golden Temple

Hundreds of pilgrims flock to the Golden Temple every day and surprisingly few foreign tourists. According to some reports, more than 100,000 people visit the Abode of God on a day off. Harmandir Sahib (Golden Temple) is the main attraction of Amritsar and one of the most beautiful sights in India. 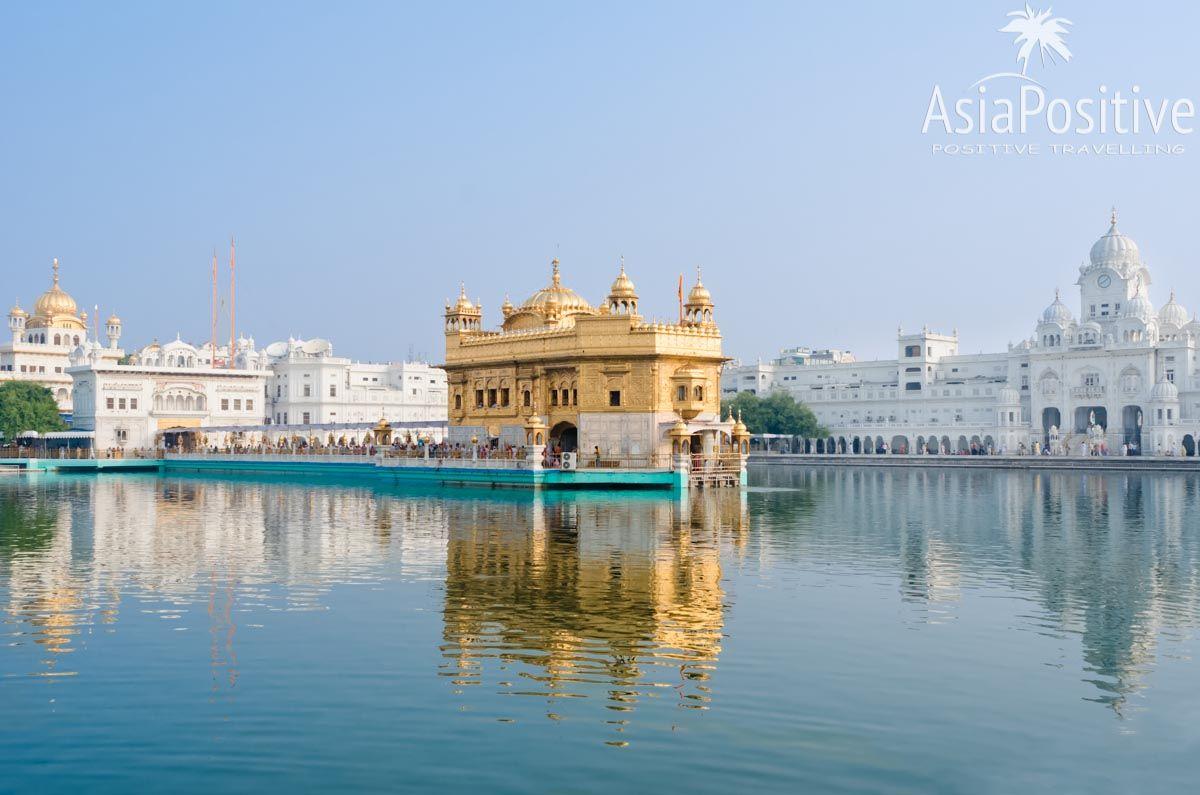 Harmandir Sahib (Golden Temple) is the main attraction of Amritsar and one of the most beautiful sights in India.

3 | Attractions of Amritsar and surroundings:

In Amritsar, apart from the Harmandir Sahib complex, there are other temples and a fort (the fort is currently under reconstruction), but they all pale in comparison to the Golden Temple. Most tourists come to Amritsar just to visit Harmandir Sahib.

If you want to explore Amritsar thoroughly, then pay attention to the following attractions:

READ
The Mountains of Iran

Otherwise, Amritsar is like many other cities in India – crowded, noisy, dirty. Many buildings look like they were bombed and yet people live in them and stores and workshops are open. 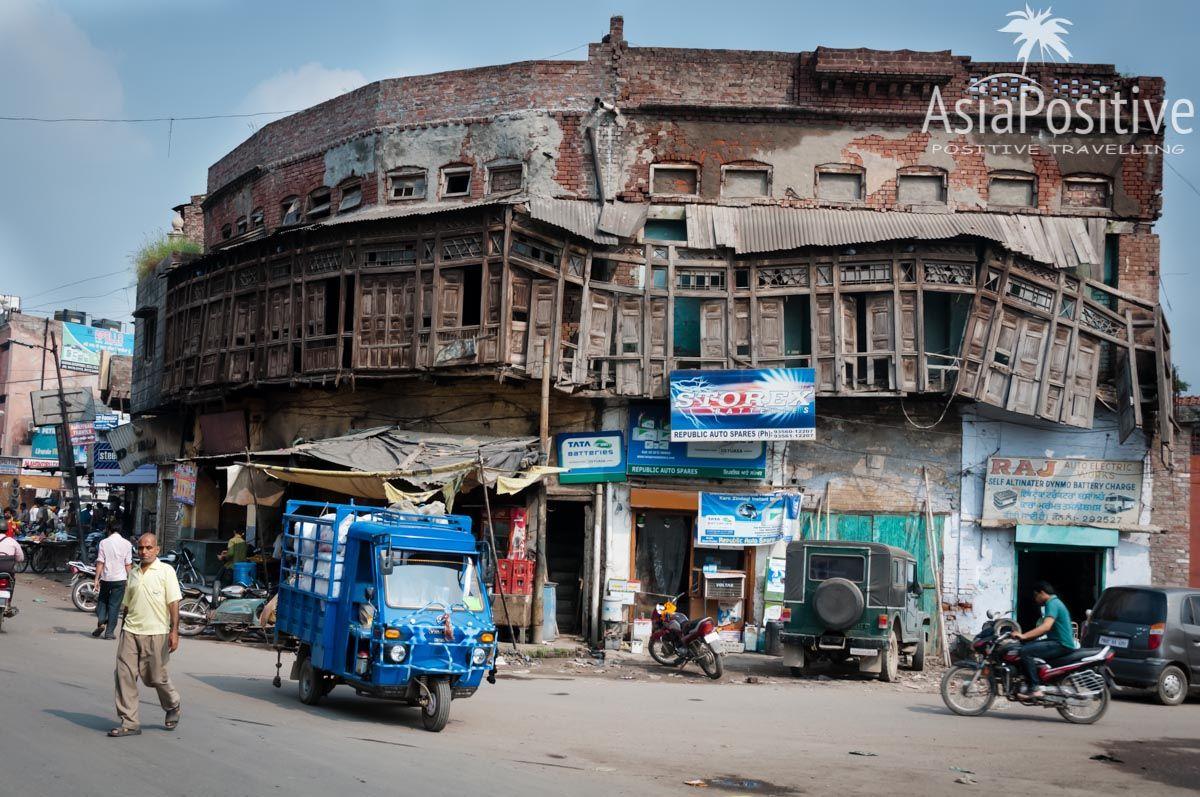 Many buildings look like they were bombed and yet people live in them and stores and workshops are open.

At the train station there are crowds of people who need to go somewhere. All at the same time. If you are planning to come to Amritsar by train, it is better to buy tickets in advance. 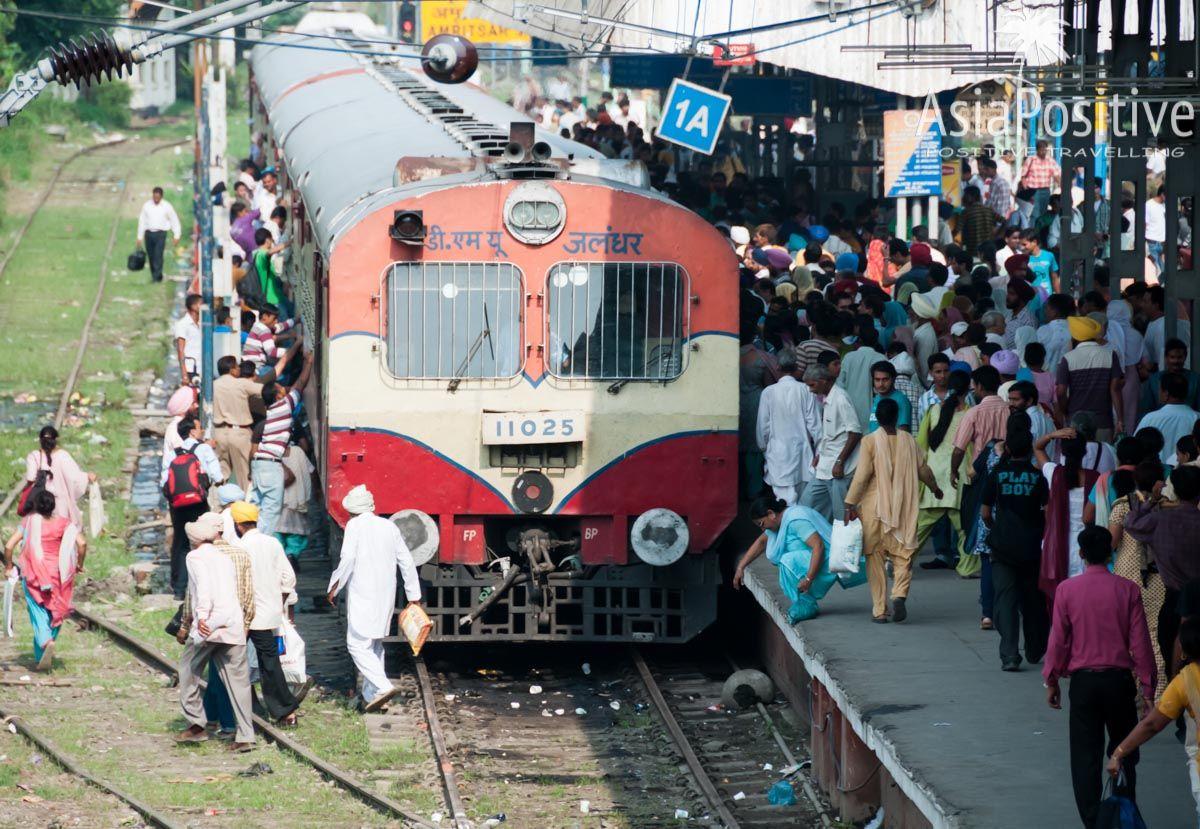 Amritsar has rickshaws and cabs. Theoretically there are also buses, but not everyone can figure out their routes. 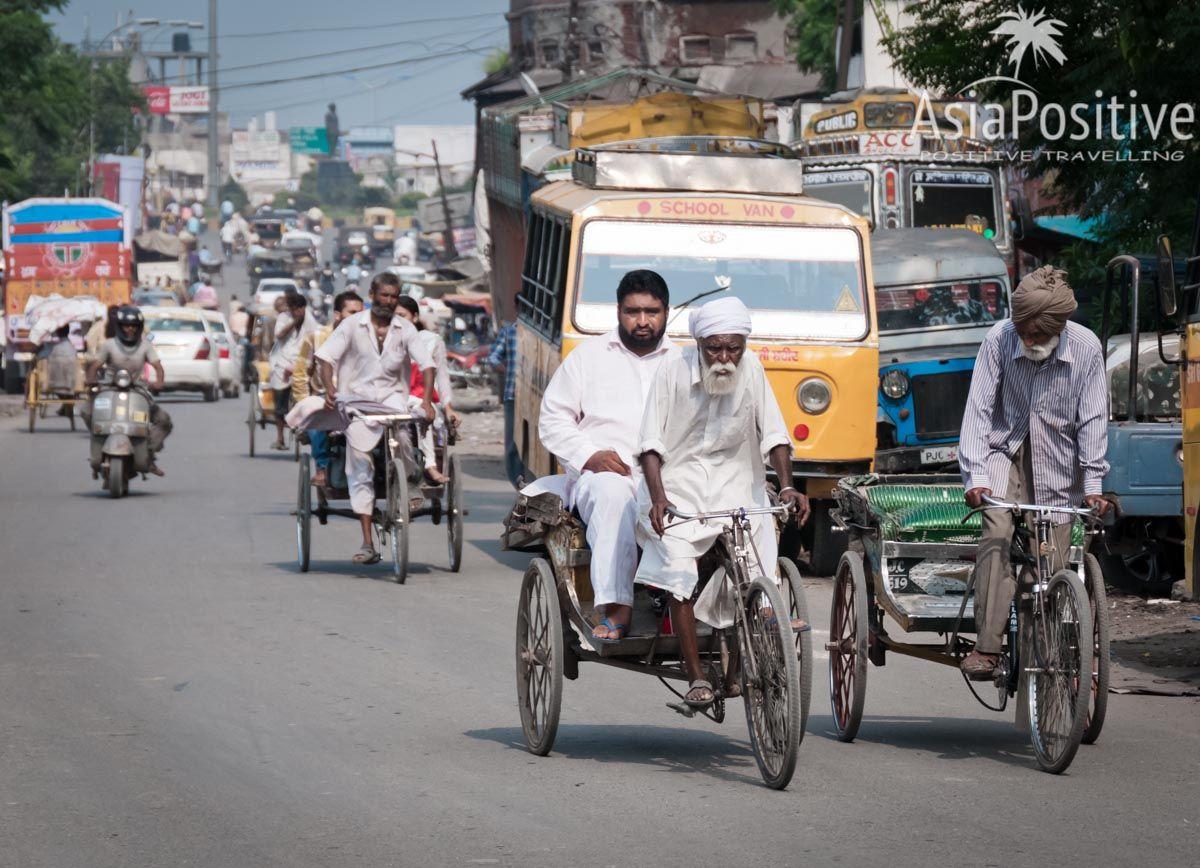 The main modes of transport in Amritsar are rickshaws and cabs.

8 | Where and at which hotels in Amritsar is best to stay:

It will be most convenient to choose a hotel in close proximity to the Golden Temple so that you don’t have to baffle yourself with the issue of transportation to Amritsar’s main attraction.