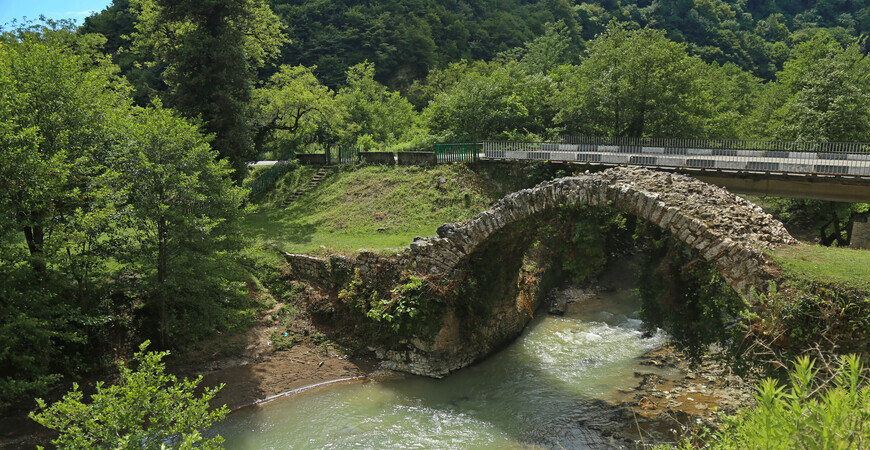 Beslet bridge is one of the oldest architectural monuments in the vicinity of Sukhum. Construction of the bridge dates back to the XI-XII centuries. This is the only monument of civil architecture of the Georgian kingdom period XI-XII centuries, preserved on the territory of Abkhazia. People often call it “the bridge of Queen Tamara in Abkhazia.

The arched bridge of Tsaritsa Tamara is one-span, “humpbacked”. The vault is 13.3 meters long and was built of square limestone slabs. Nowadays its load-carrying capacity is 7-8 tons, some researchers claim that centuries ago the load-carrying capacity was higher. Only in 1935 an inscription in ancient Georgian language was found on one of the plates of the side edge of the bridge. In capital letters it read “Christ the Lord, in every way … exalt in both lives …”. However, according to another version, the inscriptions were made during the reconstruction of the bridge in 1935.

Near the bridge are the ruins of a combat tower, which supports the theory of the military-strategic importance of the object. But, originally, the bridge was built for trading purposes – further the road went to the mountain valleys. Despite its good condition, the bridge is not used by vehicles – it is forbidden, as it is an architectural monument. Next to the bridge, just a few meters away, there is a modern bridge across the Basla River for cars and other vehicles. The juxtaposition with the ordinary creation of the last century only enhances the ancient charm of the Beslet Bridge. The ancient stones, overgrown with wild lianas and moss, take tourists back to the ancient times of Queen Tamara.

Walking on the bridge (no one guards it) is not prohibited, but you need to be very careful. It has no railings, and the stones are polished by winds, rain and numerous vehicles. If you visit the bridge on your own, without a tour group, be sure to stop for a picnic. The views here are very picturesque and the area is sparsely populated.

History of the Tsarina Tamara Bridge in Abkhazia

Of course, one of the oldest buildings in the vicinity of Sukhum for almost a thousand years of history has become covered with legends. The most popular one tells about an attack of an enemy tribe on Abkhazia. Local warriors decided to deceive the enemy and meet him from behind, but for this they had to quickly cross the river Basla. In the shortest possible time, they built a bridge using only three components – stone, sand and chicken eggs. The Abkhaz warriors defeated the army, and the bridge has stood for almost a thousand years.

The bridge owes its name to another legend. According to it, after the construction of the Beslet bridge, Queen Tamara herself walked over it. But there is no evidence of this.

The bridge was built for trading purposes, an important route for Caucasian traders. In spring and early summer, the Basla River flooded heavily, and the trade was stopped for several months. That is why they jointly erected the bridge – its supports were built in XI century, and the bridge itself – in XII century.

How to get to the Beslet bridge in Abkhazia

The attraction is located near the center of Sukhum – only 7 km. Some travelers go to the Beslet bridge on foot, but there is no trail or decorated asphalt path, you will have to walk along the roadway.

READ
General information for a trip to Amsterdam

By car, you need to follow, focusing first on the White Bridge, then on the Red and then drive along Changba Street to its end.

From the central market of Sukhum to the Beslet bridge there is a shuttle bus. You should take a #5A minibus with a sign “Chanba-Rynok” and go to the terminal stop, it is right near the Beslet bridge. The shuttle buses leave 3-4 times a day (the schedule is floating) from 8 am to 4 pm.

The centuries-old bridge made of stones, lime and eggs – Beslet bridge in Abkhazia

The Beslet bridge is a monument of ancient Georgian architecture. The structure dates back to the XI-XII centuries. Now this area belongs to Abkhazia, but at the time of construction was part of the Georgian kingdom. Similar constructions of that time have not been preserved. Often you can hear among people another variant of the name – “the bridge of Queen Tamar”.

The medieval construction played a significant role in its time – first of all, it concerned military protection. This is confirmed by the remains of the combat tower, which was built to protect the territories from seizure from the sea side. In 1935, scientists added to the history of the site with an interesting find, which confirms the date of construction. It was an artifact of ancient Georgian writing, which just referred to the aforementioned centuries. 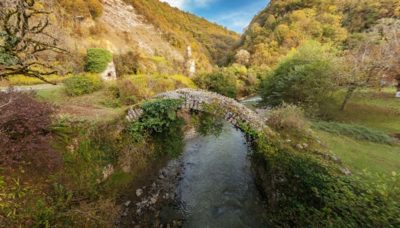 Over its long existence, the bridge could not help but acquire its own mythology. The most popular example is the legend of the attempted attack on the Georgian kingdom, which was unsuccessful. It was possible to defeat the enemy by building this very bridge. The foreigners could not foresee such a development and were met by surprise from the rear. The goal was achieved, and the structure is still standing today. Legend has it that only slaked lime, stone and eggs were used in the construction of the crossing.

READ
Journey through the places of Sherlock Holmes

And the alternative name of the bridge is associated with another legend. According to it, one of the first people who crossed the bridge, was the Georgian Queen Tamar. However, there are no reliable facts indicating the veracity of this and previous stories.

In addition to its military purpose, the building also had a commercial one, for which it was originally built. It played an important role in the trade of Caucasian merchants. Their business had run smoothly before, but not in the spring and early summer: at that time trade was impossible because of the flooding of the Basla River. In order not to stop trade for several months, it was decided to build a crossing together. It is known that the construction of supports was begun in XI century, and the end of construction was in XII century.

The structure is an arched construction without intermediate supports. The road itself was covered with square limestone slabs. Nowadays it can support the weight of 7-8 thousand kilograms. Some historians say that in its “youth” the architectural monument had even greater carrying capacity.

Synopsis! Anyone can walk on the bridge, but you should follow safety regulations, for example, do not go close to the edge. There is no railing, and the surface is very uneven and rocky. In case you came here without a tour, it is a good idea to stop for a picnic. There aren’t many people here, and the scenery is very beautiful – just right for a snack in the fresh air.

What to see nearby? 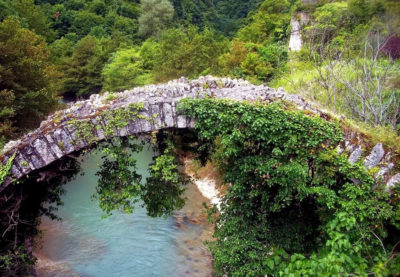 The place of interest is situated 7 kilometers from Sukhumi. You can get there on foot, as tourists sometimes do, but this route will not be the most convenient. There is no path for pedestrians, so you will have to go by the side of the road.

By car you should go in the beginning to the White Bridge, and then to the Red Bridge. Then along Changba Street to the end.

You can also take a shuttle bus. Bus number 5A goes from Sukhumi market to the sight, which is the final stop. Before you travel, it is better to clarify the schedule, as it may change. You can use public transport from 8 am to 4 pm, the frequency is 3-4 trips per day.

In order not to lose time waiting for the bus, which does not go very often, you can take a cab. It’s a short drive, so the trip won’t cost much more than a bus ride. There are official cab services Vershina, GT Abkhazia and Luck.