The sights of Sudak, situated in the south of the Crimea, are very popular among travelers. The rich cultural heritage of the region is combined with the beautiful nature of the peninsula. This article describes what sights Sudak worth to visit every tourist. 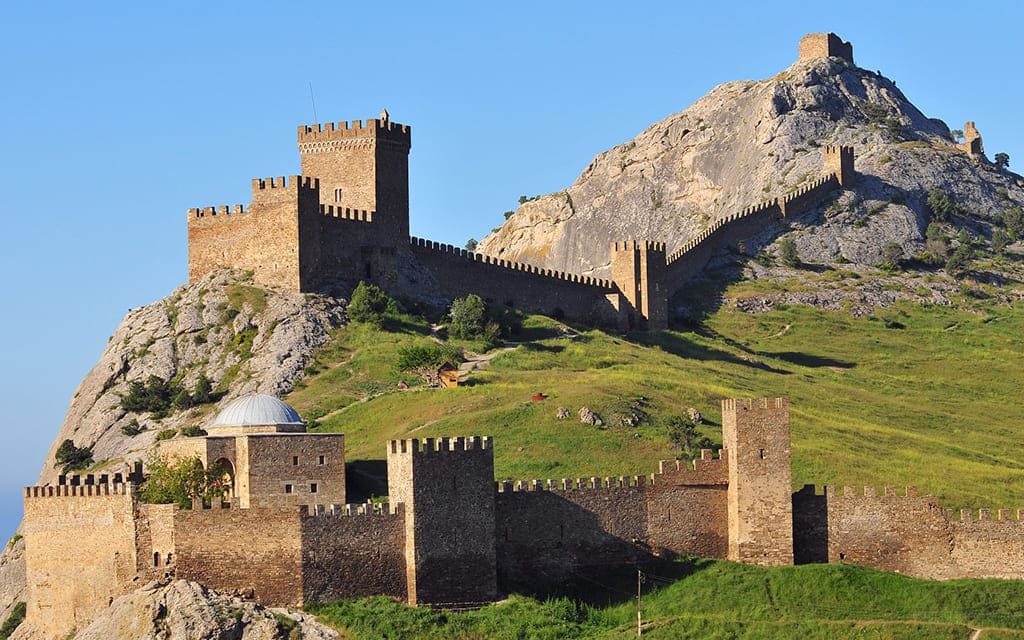 Sudak fortress, also known as the Genoese fortress, was built in the VII century to strengthen the defense of the peninsula. The fortress is located in a fairly remote place, and since the watchtowers are located on the top of the mountain, it is a perfect view of all the surroundings. This Sudak landmark has survived more than a dozen battles, and therefore has not survived in its entirety, but even in our time there is something to see. The majority of buildings in the complex were built by the Genoese in the XIII century.

Temple of the Intercession of the Holy Virgin in Sudak 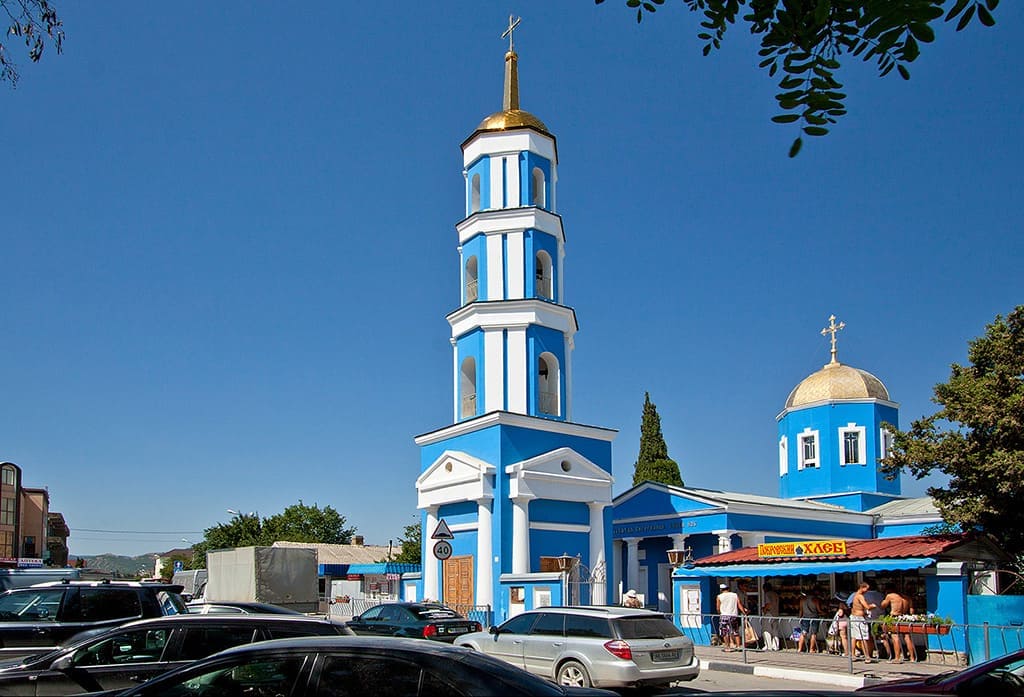 The temple of the Intercession of the Holy Virgin is the most famous religious building in the city. The construction of this Sudak sight began in 1819 and was held at the expense of charitable contributions of citizens and patrons. The temple amazes tourists with its elegance, but the most valuable is its rich interior. The tsar’s family stayed here more than once. In 1996 the church was restored to its original appearance and some new icons were added.

The best place in Sudak for a fun family vacation is the water park. The main feature of this place is a huge number of water slides – here you will find an attraction to your liking and a child and a fan of thrills. The water park is great for relaxing – there are six swimming pools of different depths. Quite often in the water park are water discos and foam parties. Next to the rides there are several bars and cozy restaurants. 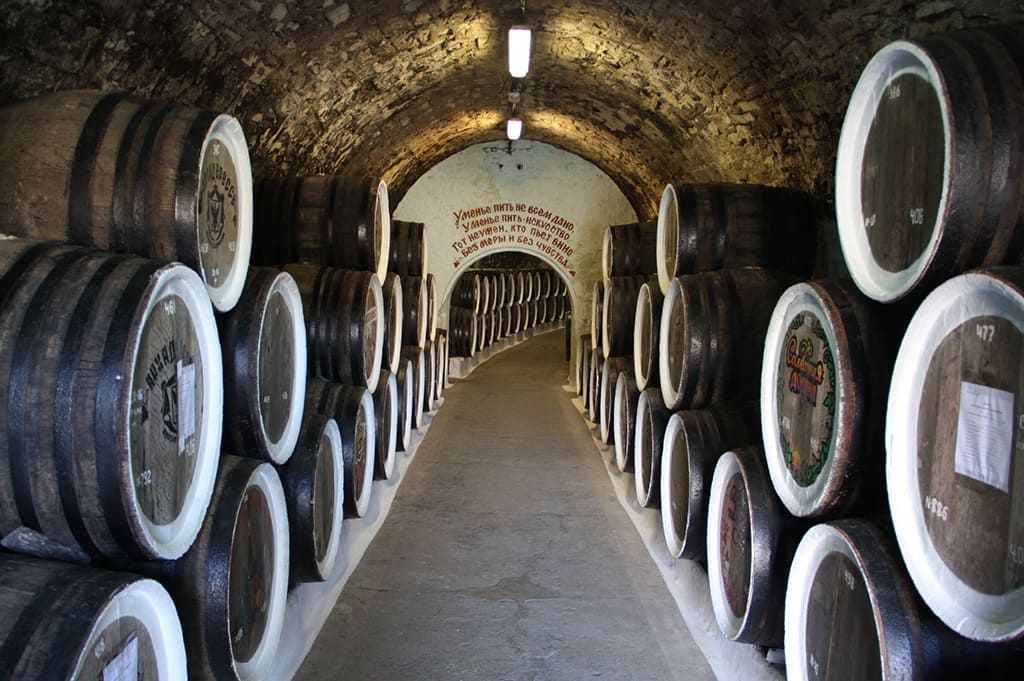 The Crimean peninsula is world-famous for its vineyards. The winery “Sun Valley” was founded in 1888 by Prince Golitsyn. He bought the land and commissioned the planting of vineyards of the highest varieties here. Subsequently, the prince withdrew from business, but his factory did not stop and is still in operation. The wine produced by the winery has won various prizes and awards every year. Tourists are given the opportunity to look at the vineyards and taste high-quality drinks.

READ
Gdańsk, Poland: why we are coming here for the third time 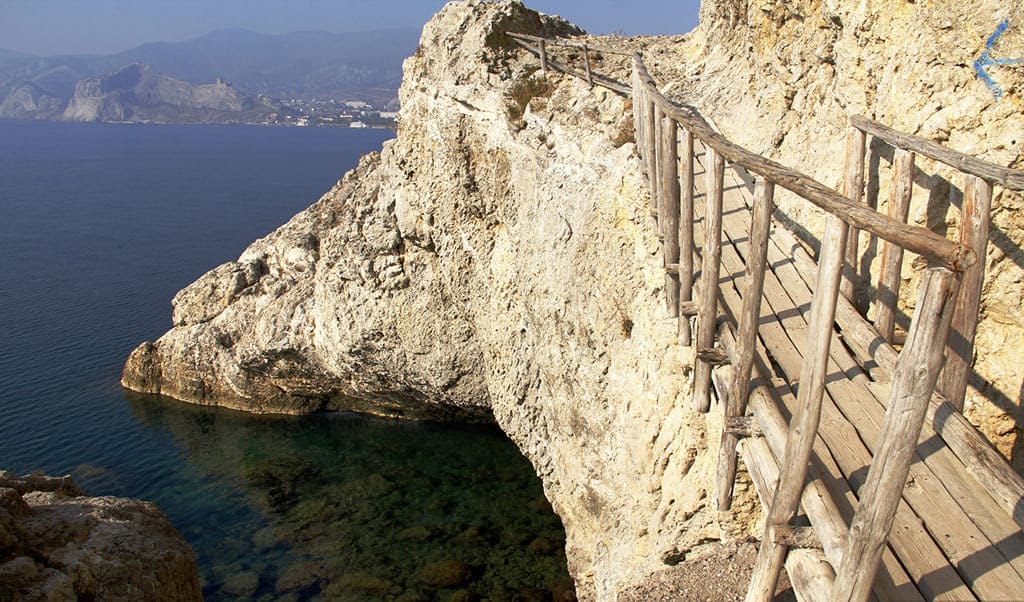 Sudak is especially famous among tourists for the richness of natural monuments preserved in this area. Alchak-Kaya Nature Reserve tract has gained special popularity. Coral reef for thirty years, recognized as a reserve, there were found parking and rock paintings of ancient people. Geologists have repeatedly found deposits of minerals such as gold and calcite. This place is ideal for lovers of active recreation, because through the reef is a road, the passage through which requires a certain effort. 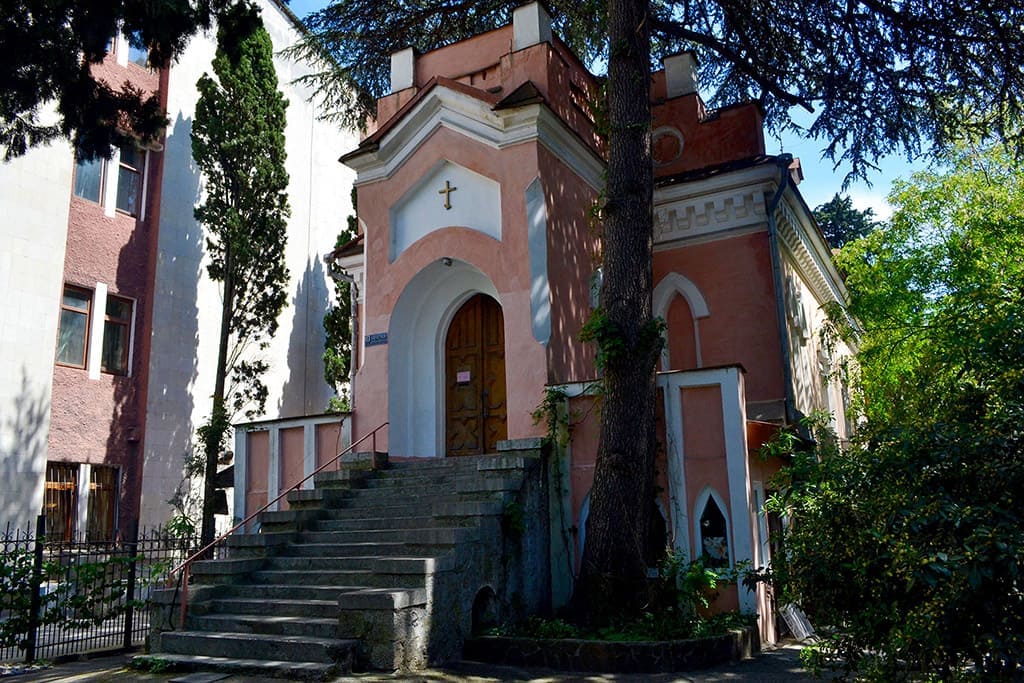 In the 19th century, the Crimean Tatars left the territory of the peninsula, and Catherine the Great invited German settlers to settle in these lands. In 1887, they founded the Lutheran Church – perhaps the only example of German architecture in the Crimea. Later the Soviet authorities sent the Germans back home and used the church as a cinema. In 1992, worship services began again. In addition, the ruins of a Greek church of the XII century and 30 tombstones have been preserved at this place. 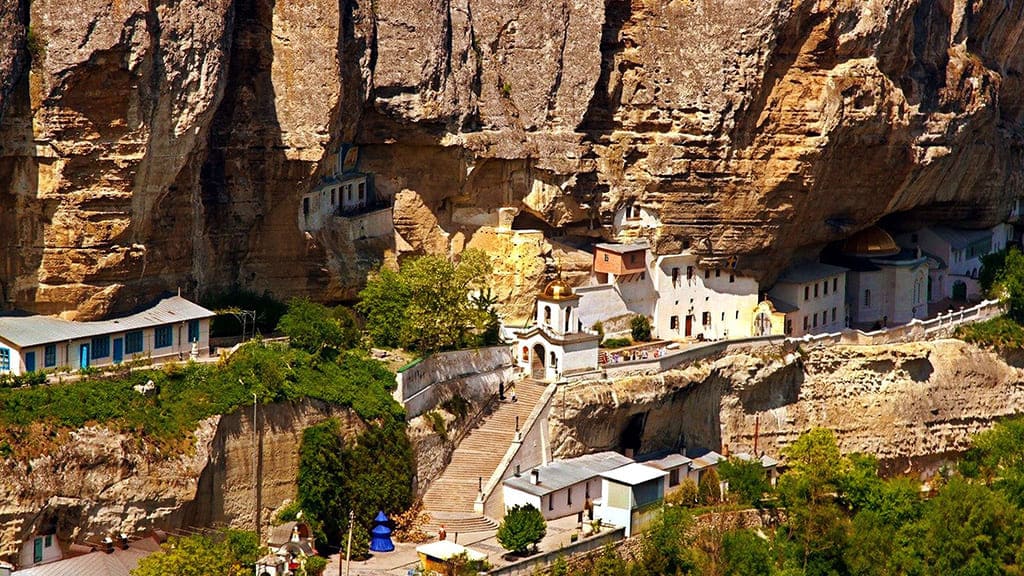 On the mountain Sokol, which is located near Sudak in the XIX century discovered the remains of an ancient Greek monastery. This temple was cut into the rock, and clay was also used in its construction. Historians assume that the building was built in the VIII century by Byzantine monks and priests who fled the country because of terrible religious persecutions. In this Sudak sight, you can still see three cells and several rooms. Archeologists have found a lot of crosses and icons here. 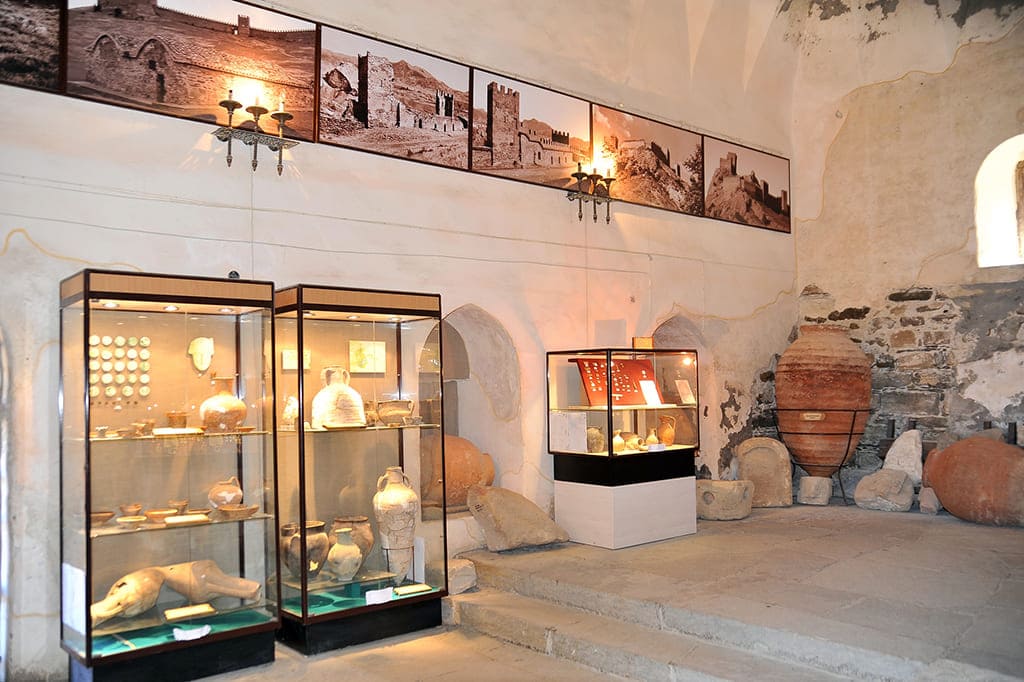 On the territory of Sudak fortress found a lot of interesting and valuable artifacts. To keep these artifacts the authorities of Sudak opened the museum, which is located inside the fortress. Among the exhibits, you can find old manuscripts, ceramics, and Genoese coins, but most of the exposition is devoted to military operations. Here you can also find weapons of Crusaders, medieval swords and chainmail, and firearms of the Russian Empire era.

9. Temple of Saint Elijah in the Sun Valley 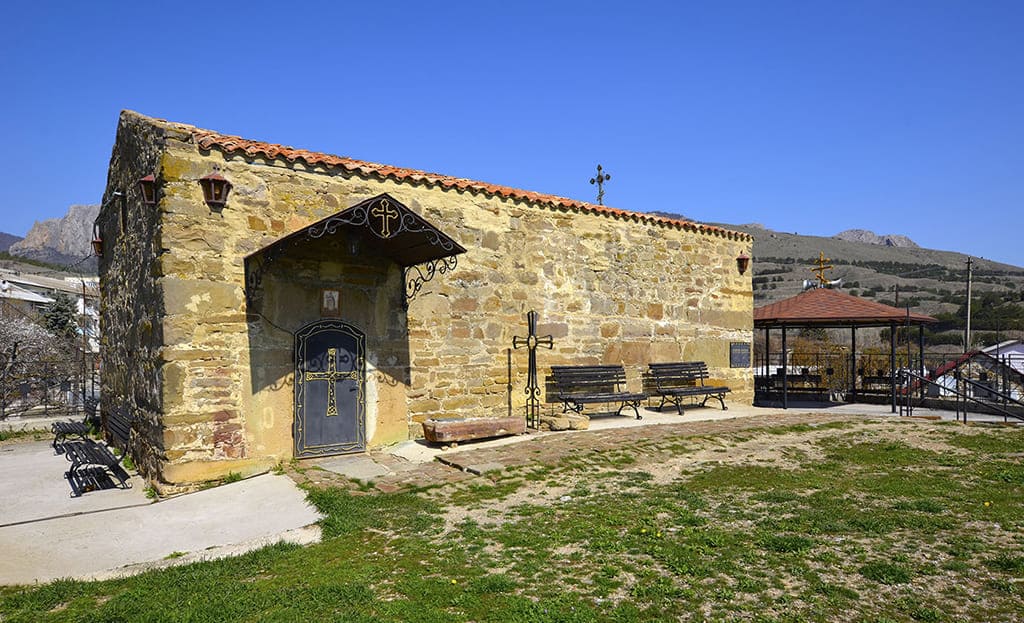 The temple of Saint Elijah in the Sun Valley occupies a special place among Sudak’s attractions. Its architecture differs significantly from that of usual churches. The construction itself dates back to the X. After the eviction of Greeks from the Crimea, the temple passed into the ownership of local residents. Thanks to their merits the temple was completely preserved. The inner decoration of the XII century has great cultural value, and the services in the temple had not ceased for more than a hundred years. 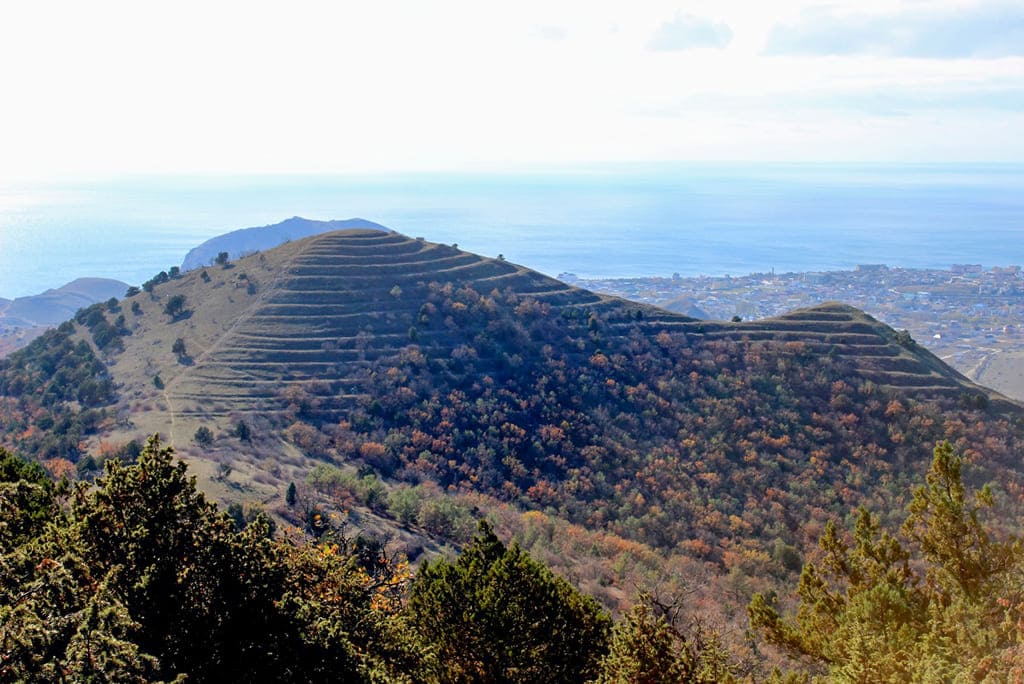 The mountain got its name from the monastery that used to stand on this territory. The monastery was built in VI century, but now only few ruins and a spring, from which, according to legend, the holy water flows, are left of the temple. Mount Ai-Georgius offers a very picturesque view over Sudak’s surroundings. This place is one of the most visited attractions of Sudak. Here you can always take great pictures of the local nature.

Sudak: what to see and where to go in the city and its suburbs

Sudak is one of the few resort towns of Crimea, which is not built up with large-scale hotel complexes, does not entertain tourists noisy discos and flamboyant parties. It’s a calm, secluded corner of the peninsula, with cozy cottages covered with winding vines, comfortable beach area, and hundreds of vendors, offering local delicacies and fragrant wine. Besides the standard water activities, there are plenty of fun things to do in the city, from historical sightseeing to thrilling cruises, hang gliding, helicopter rides and scuba diving. While planning your trip, you’ll need to find out what you can see in Sudak and where you can go on your own in its surroundings. 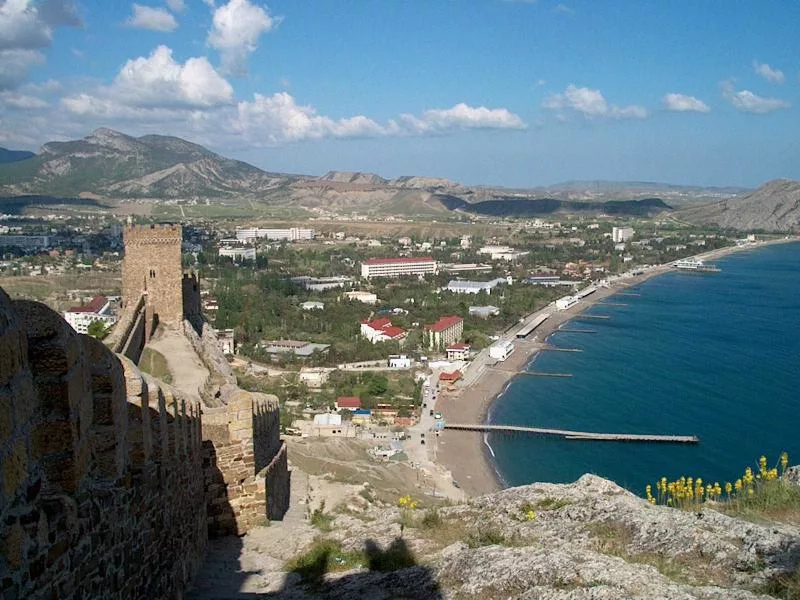 The settlement is located in the southeast of the peninsula. You can get here from any city of Crimea by bus or cab. There is no railway transport. So there is no air service either. 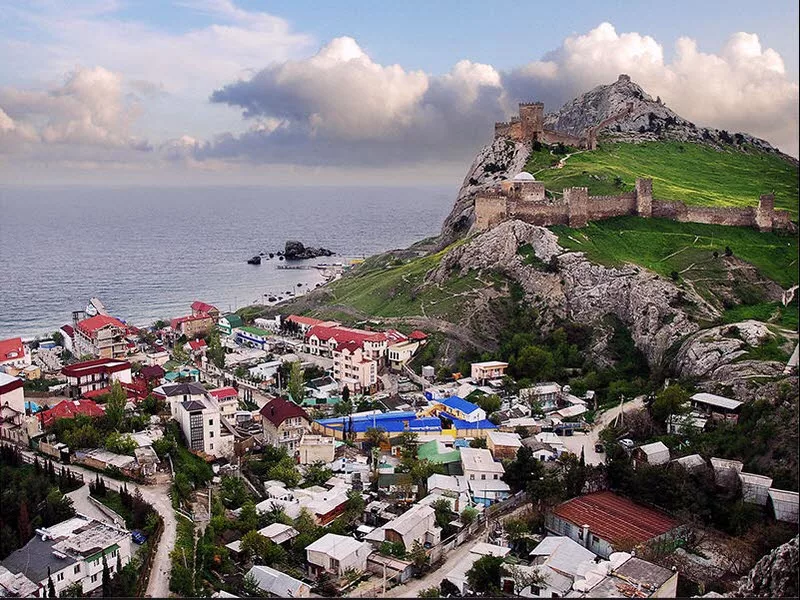 As mentioned above, the city does not have its own airport, but from the capital and other Russian cities you can fly to Simferopol, and from there get to the resort by bus or cab. For those who want to travel in comfort, there is always the option of renting a car. Ticket with a change in Moscow is usually half cheaper than direct flights from other localities.

Another way to get to Sudak is by train on a single ticket. This means that the public transport on wheels will bring you first to Krasnodar or Anapa, and then you will take a bus with a crossing of the Kerch Strait. Such a way is much longer than the air travel, even with well-organized connections, but its cost is several times cheaper.

Sudak is 100 kilometers from Simferopol, about 190 kilometers – from the hero city of Sevastopol, 115 – from the famous Yalta and 80 – from Alushta. In this case, get to the resort, you can follow two directions: through the village Belogorsk or along the coastline, bypassing Malorechenskoye and Rybachie. The first route is more developed and is in better condition, but you’d better take the second one. Then, on the way to the resort, you can enjoy the picturesque views of the mountains, neatly planted vineyards, as if someone grazed the earth in even rows and small coastal villages.

What to see in Sudak: Sights 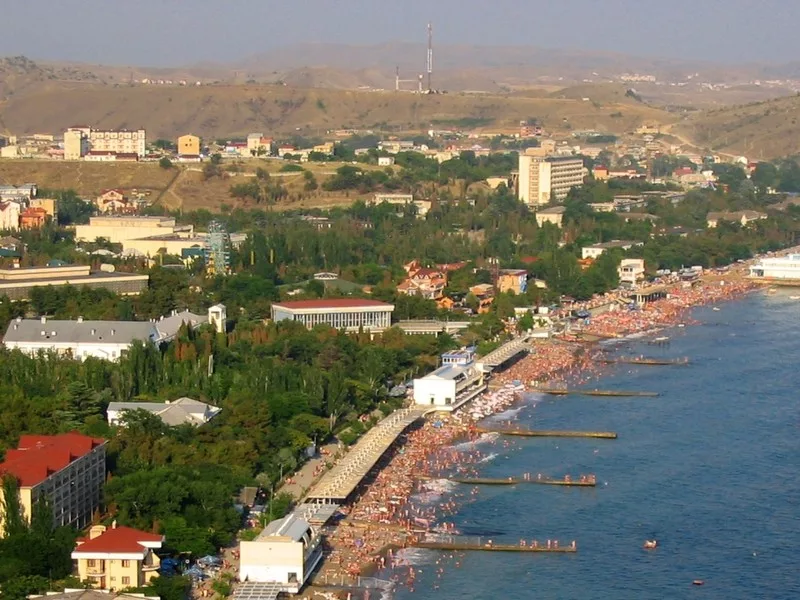 There are very few sights in the city. The nearest ones are in neighboring settlements that can be reached by water or regular bus. The first thing worth seeing is the Genoese fortress that dates back to the 14th and 15th centuries. In addition, many will be interested in excursions to numerous wineries, where you can not only taste the invigorating drink, but also buy a few bottles as a gift to relatives or friends. It’s also worth visiting the local cheese dairy.

READ
The 18 Best Sights of Versailles - Description and Photos

Where to go in Sudak

The active tourist season starts after the 20s of June and lasts until the end of August. This is the period of festivals and the best bronze tan. Accordingly, the prices during this period increase several times, and the number of vacancies in holiday homes sharply decreases.

From October to late May at the resort is considered a low season, when calm and quiet reigns. The best time for swimming – the end of July-July, when the water in the sea warms up to a record 24-26 degrees.

For those who can not stand the summer heat and crowds – the ideal time for recreation falls on the Velvet season – early September-October. Plus, in this period falling prices for entertainment and housing, on average 20-25 percent. The main mass of tourists go home, there are less queues at the ticket office for excursions, the beaches have more free sun beds, and the water is still warm to 23 degrees – a great time for a relaxed holiday.

If you do not like a swimming vacation and you are not going to Sudak for new experiences and excursions – prefer a vacation to the cool May and September. 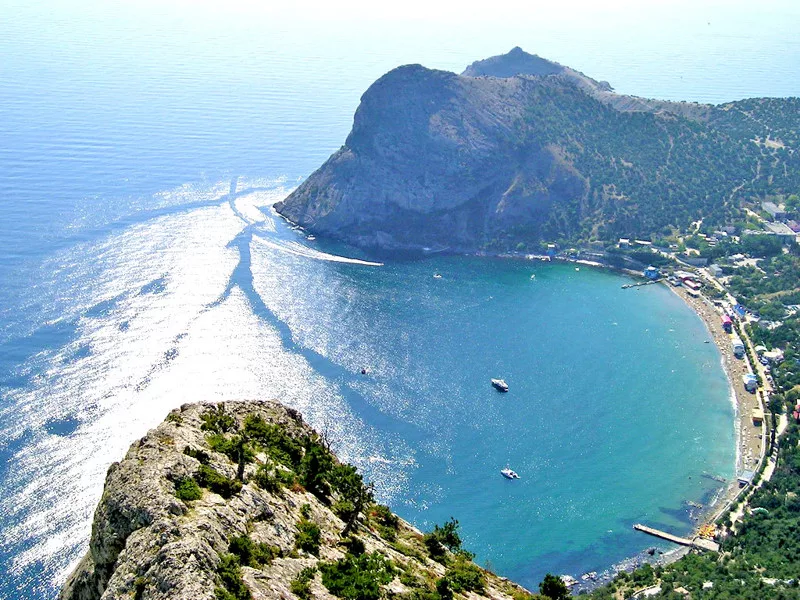 Summer is the high season in Sudak. Hot days are characterized by temperatures of 30 degrees, which are slightly relieved by light sea breezes. In the morning they blow from the sea, and after sunset on the contrary – from the mountains in the direction of the coast, filling the air with the smell of evergreen trees. Rains are extremely rare, but during this period they can bring with them dangerous mudflows. Summer is the best time for swimming and sunbathing, water activities and paraglider flights.

Autumn in Sudak is characterized by warmth. Of course this is not the summer heat, but noticeably colder does not begin until the second half of October. In November the weather is cloudy, and the sky is almost constantly covered with gray clouds. The temperature is unstable and can vary from 8 degrees to 17. In the autumn in Crimea there comes a velvet season – the temperature of the sea and the air is approximately identical and is about 20 degrees of heat in September-October. There comes a time of unhurried walks, excursions, wine tasting and yachting in a comfortable temperature range.

Winter in Sudak is cool and windy. There is almost no snow, but instead there are heavy rains and storm winds, the sea is covered with whitish foam combs. The temperature is 3-8 degrees Celsius. Frosts also occur in the area, but mostly as an exception. In winter the weather is often overcast, but through the thickness of the clouds sometimes the bright sun breaks through.

The beginning of spring in the city, as well as other areas of the peninsula is characterized by unstable weather. Dense fog often reigns in the air. But by mid-April the days will be sunny and cloudless. The first shoots of gladioluses and irises are already sprouting, crocuses are in full bloom, and the smell of juniper and cedar pine needles is in the air. Everything around is waking up and blooming. In May, the day is summer heat, you can sunbathe and get a bronze tan on the beaches, but the sun goes down, it’s cool in the autumn and need to get a windbreaker and a warm sweater.