A small town in Lombardy, located near Milan, at the foot of the Alps – an attractive place for tourists. It is a corner of the Middle Ages, preserved in the fortress walls, ancient palaces and cathedrals. The picturesque beauty of nature is in harmony with the medieval flavor of the cityscapes. The words of the hero of an old comedy come to mind, proudly asserting: “I am Truffaldino of Bergamo!” He really had a lot to be proud of.

How to get to the upper Bergamo 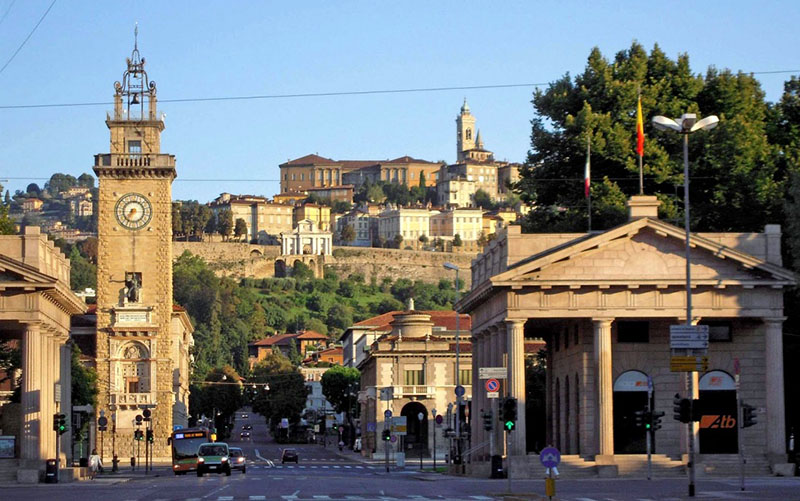 The Bergamo area is divided into 2 parts: the Upper Town and the Lower Town. The second floor of the city is interesting with its ancient sights and architectural monuments, the same age as the Roman Empire, so the main time should be devoted to the examination of the upper part of Bergamo. There are three ways to get to Bergamo: by foot from the railway station for 20-30 minutes; by funicular railway for 10 minutes; or by bus number 1 for 15 minutes.

All depends on your physical condition: if health allows, it is best to walk up the ancient stones, to admire the magnificent natural surroundings, breathe the air of true Italy. But climbing on the cable car, in a comfortable carriage is also a great pleasure of a short trip, when you can see the amazing beauty from above. It feels like you’ve found yourself in a fairy-tale kingdom-state.

Attractions of the Upper Town 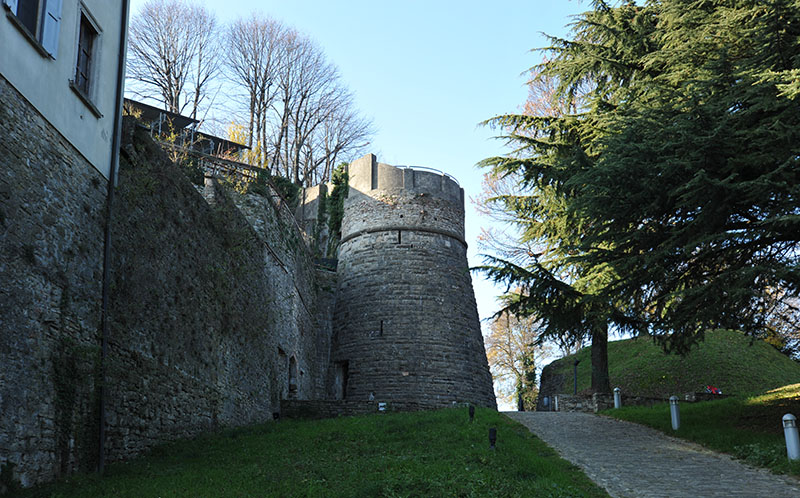 The cable car takes you to the narrow, typically medieval Via alla rossa, which leads to the ancient Castel di San Vigilio. This fortress embodies the entire history of not only Bergamo, but of all Italy. Its ancient walls (the first mention of the castle in the 6th century A.D.) remember the Romans and the barbarians, who seized the fortress more than once. Several times the castle walls were strengthened, rebuilt. The last reconstruction took place in the 15th century during the Venetian Republic. The castle survived to this day, except for some damage by the Austrians in 1829.

Now tourists have the opportunity to see the gray stones of the castle walls, touch them and feel the distant era. There is a museum that exhibits historical documents, antiquities. 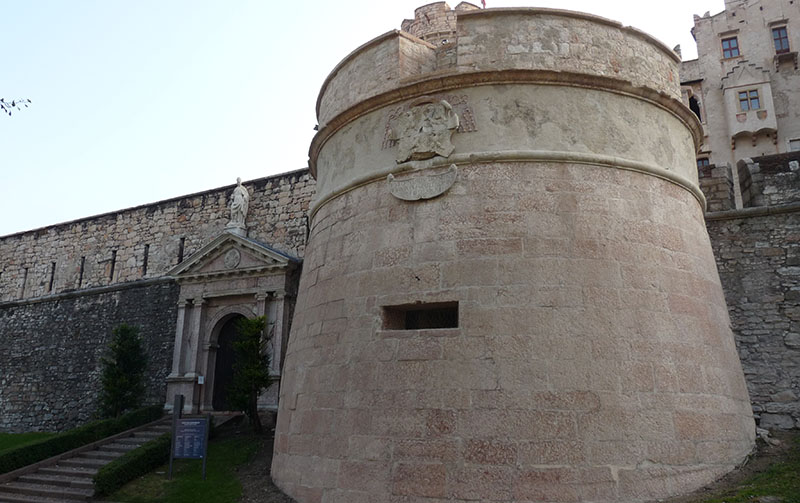 How to get to the castle: the funicular of Upper Bergamo takes you to Di San Vigilio in 5 minutes. The funicular station is in front of the gate of San Alessandro. The funicular doesn’t work during the siesta (12:30-14:30), so it’s better to calculate your time. It is not worth to go up on foot to save strength for further sightseeing.

You can come by bus number 1 from the railway station, getting out at the same stop.

The funicular works every day from 10:00 am to 8:00 pm; on Fridays and Saturdays until 01:30; on Sundays from 09:00 to 22:45, except for siesta. Siesta in Bergamo is a compulsory break, a sacred thing, a centuries-old tradition. When planning your next visit, keep this in mind and use it to relax.

Church of the patron saint of Bergamo 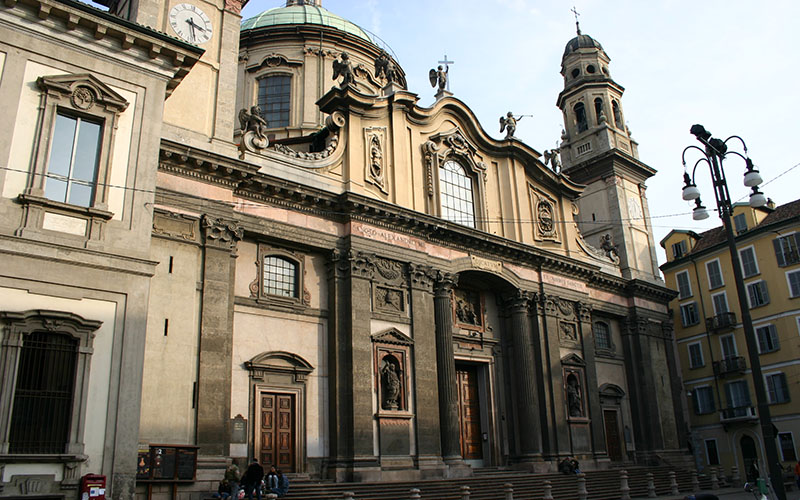 When you go down the hill of San Vigilio, you arrive in Piazza Duomo (Cathedral Square), where there is an architectural jewel, the Cathedral of Sant’Alessandro (just before the funicular stop), erected on the site of an old 6th century temple. This true masterpiece is the work of two architects: Averulino (15th century) and Carlo Fontano (17th century). The interior interiors were decorated in the 18th century and the dome was superstructured in the 19th century.

The interior of the temple makes an indelible impression: the artistic masterpieces of ancient painters Giovanni Moroni, Tiepolo and others have found their worthy place here.

READ
What to see in Sondrio, Italy 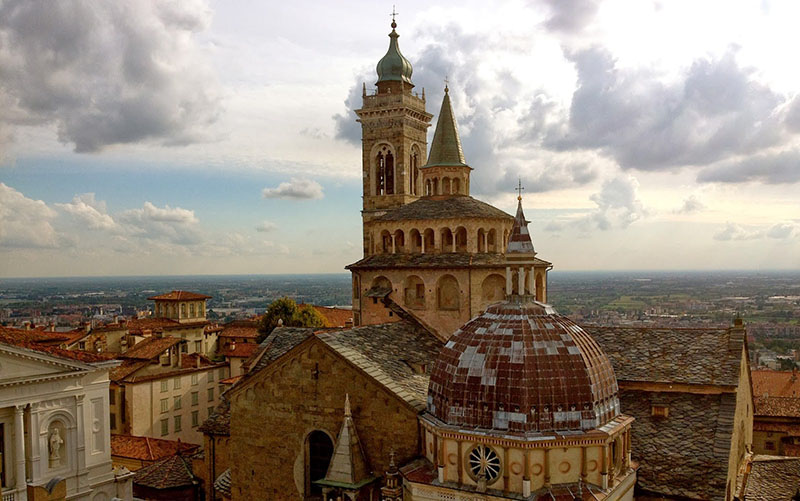 Near the cathedral the Basilica di Santa Maria Maggiore, built during the 11th to the 13th centuries. In the 17th century. It had a reconstruction of the interior interiors in the lavish Baroque style, which are stunning in their decoration. The facade of the church has retained its Romanesque style. The famous 18th-century composer Donizetti, who was born in Bergamo, is buried here. 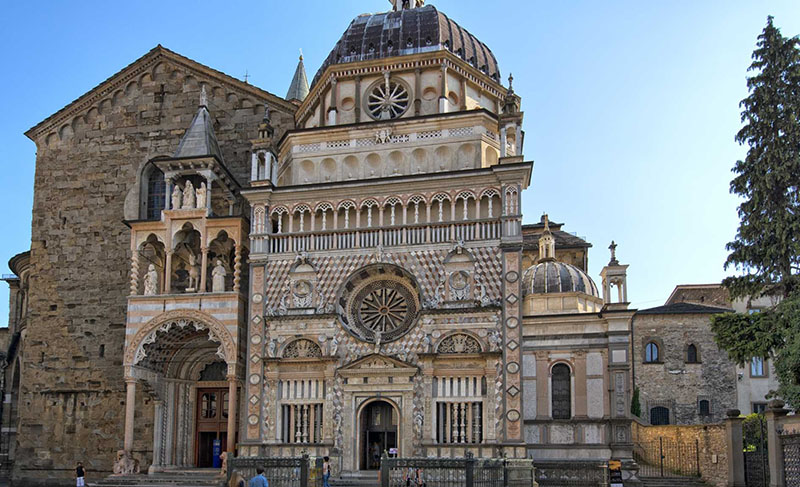 Attached to the basilica is the Colleone Chapel, a true architectural marvel whose facade is decorated with an intricate fanciful ajoure, rose windows, and is topped with an intricately shaped dome. The chapel was built as a tomb over the ashes of an important person of Italy – Bartolomeo Colleone in 1476 (later his daughter Medea was buried here). Inside, the chapel is just as beautiful: marvelous frescoes by Tiepolo, an altar with splendid statues of saints; paintings, gilded decorations, all in Renaissance style.

In memory of Donizetti – Museum in the Palace of Mercy 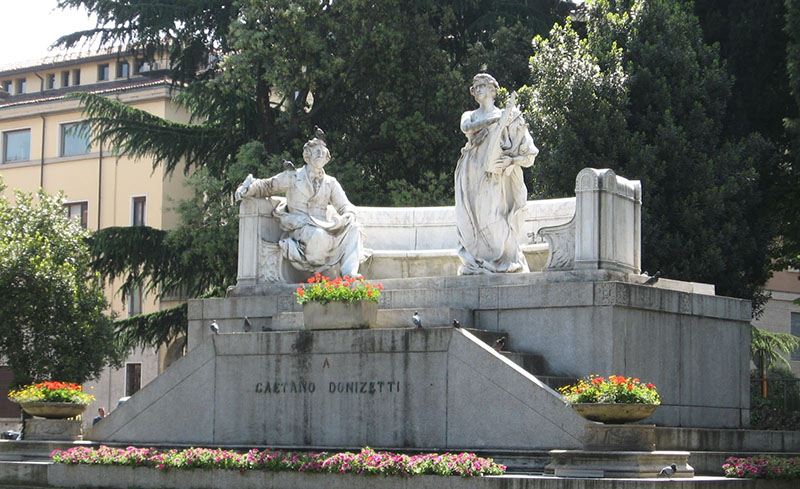 From Piazza del Duomo you should walk along the typical medieval street Via Arena to the building number 9, to see the Palace of Mercy. It is interesting not only as an architectural monument, but also as a museum of the aforementioned Gaetano Donizetti. There are exhibits on display – evidence of the life and work of the talented composer, whose operas are still performed on the stages of the world’s famous opera houses. 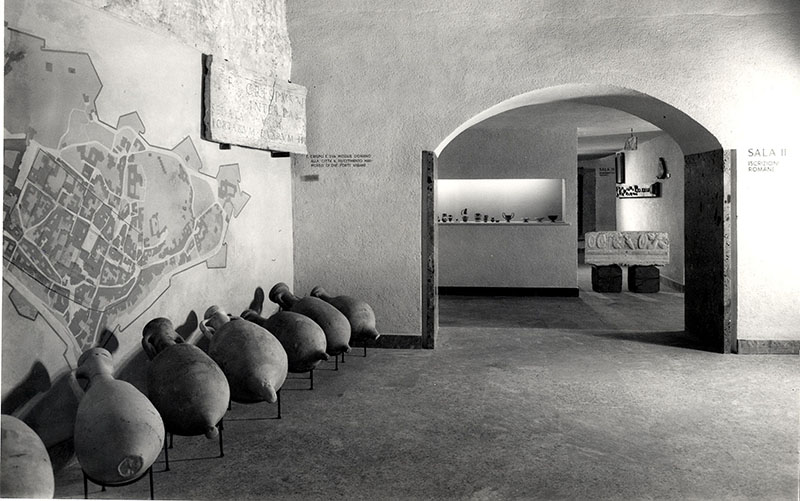 Another place worth seeing nearby is the Archaeological Museum, which has some interesting antiquities and artefacts from the Lombard way of life.

The Historical Museum is also not to be missed to get a better idea of the Venetian era in Bergamo, especially since it is located in the former monastery of San Francesco. 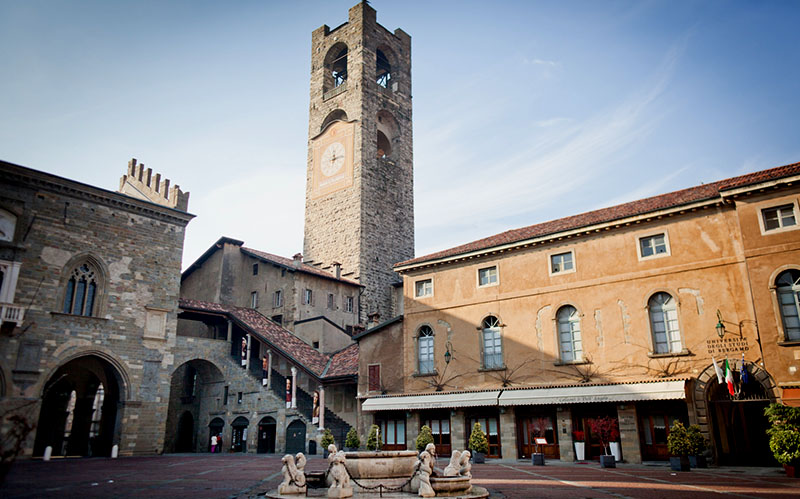 From Piazza Duomo, through the gallery of the town hall adjacent to it, one can reach the center of Upper Bergamo, the Old Square, whose history began in the 14th century and whose active construction took place at the beginning of the 15th century. A true monument of the past is the town hall (12th century) of Palazzo della Ragione. The façade is crowned by the symbol of the Venetian Republic, a sculpture of a winged lion holding in its paw an open book symbolizing the time of peace. 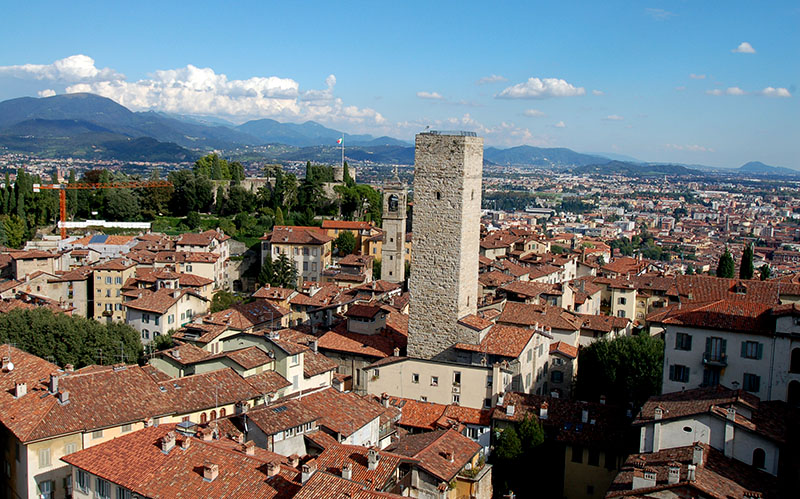 Opposite the palace-hall there is another more ancient architectural monument, the Tower of Campanone (11th century, rebuilt in the 15th century after the fire). If you look down from the top of the tower, you will see a picture that allows you to forget for a moment that it is the 21st century: so strong is the color of the Middle Ages. The bells of the tower strike 180 beats at 10 p.m., as they did in the old days when the city gates were closed.

READ
Top 10 best hot air balloon flights in the US 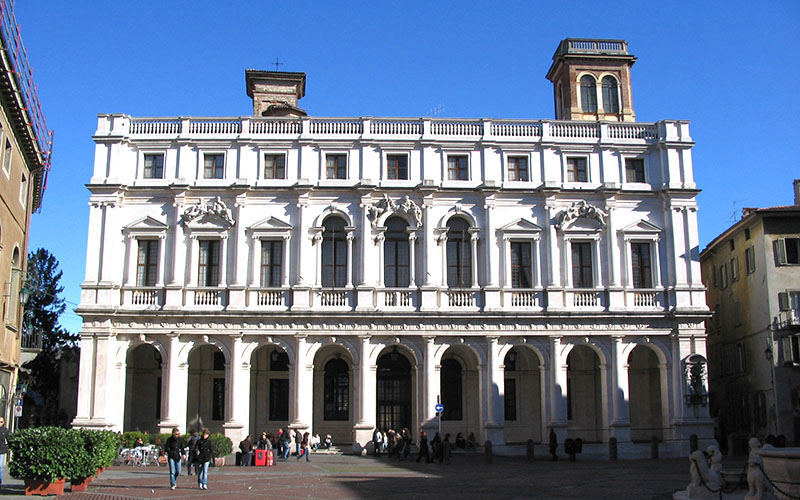 Next to Palazzo Ragione is the New Palace, a classical light building with columns which was built in the 17th century as an administrative building. It housed city officials until 1873, and now houses the rich library of May, the famous 19th-century Italian philologist and cardinal. If you go around the New Palace, behind it you can see the oldest structure in the square, the Church of San Michele al Arco (857), which now houses the university.

The sights of the Lower Town

That’s the end of the Upper Bergamo sightseeing tour and a cable car ride down to the Lower Town, which has its own charms. 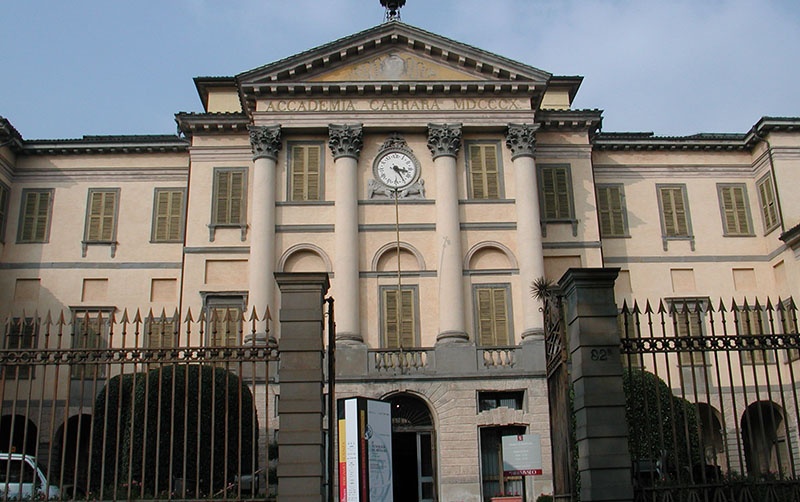 One of them is the Accademia Carrara, an art gallery founded by the city’s famous patron of the arts, Count Giacomo Carrara. In this art treasury visitors enjoy more than 2000 paintings of great masters of the Italian brush: Raphael, Botticelli, Mantegna and Titian. We would like to mention the patriotism of Italians: they do not keep masterpieces in private collections, do not make them the object of profit, but willingly give them in museums and galleries. 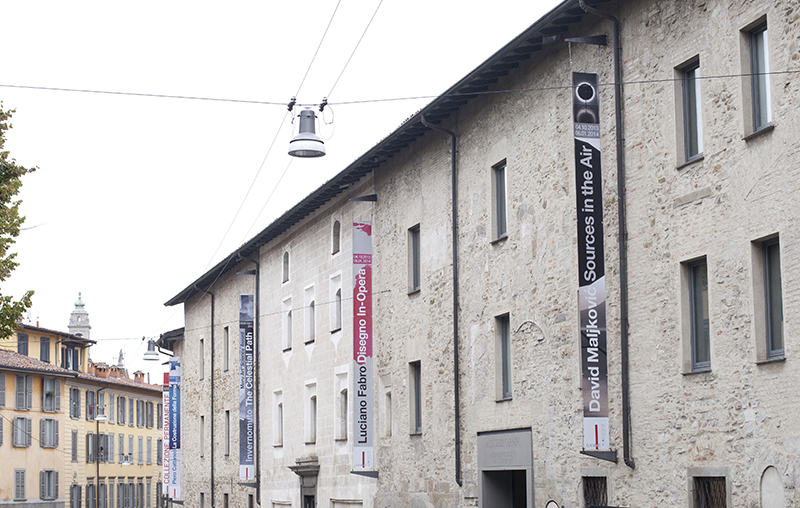 Opposite the Carrara Gallery is another temple of creative works, the Gallery of Modern Art (1991). It is a branch of the Accademia Accademia dell’Arte, where the paintings of Italian and Spanish artists of the 20th century are on display.

A day spent in the city is an unforgettable journey that leaves the best impressions.