10 great places in Japan you haven’t heard of

Many of Japan’s attractions are well known abroad: the Tokyo TV Tower, the Golden Temple, the park at the site of the Hiroshima nuclear bomb drop. Travellers plan to rub Hachiko’s nose in the Shibuya district, buy anime goods at Akihabara, and explore the lives of geisha in Kyoto. In Japan, however, there are many cool places off the beaten path, but easily accessible to the untrained tourist. I have collected ten of these places that I have visited myself and sorted them by distance from Tokyo.

Japan is the perfect country for gastronomic tourism, and you should definitely try ramen noodles. In any establishment. It will be delicious everywhere. But the chicest thing is to go to Yokohama (half an hour to an hour from Tokyo) to the ramen museum. Like any food museum in Japan, this is first and foremost a place where you can eat very tasty, authentic and inexpensive food. But the beauty of this particular museum is that it reproduces, indoors, the design and life of the Japanese street of the mid-20th century. Signs, posters, phone booths, bicycles, you can look at and photograph for an hour. And then – to have lunch! 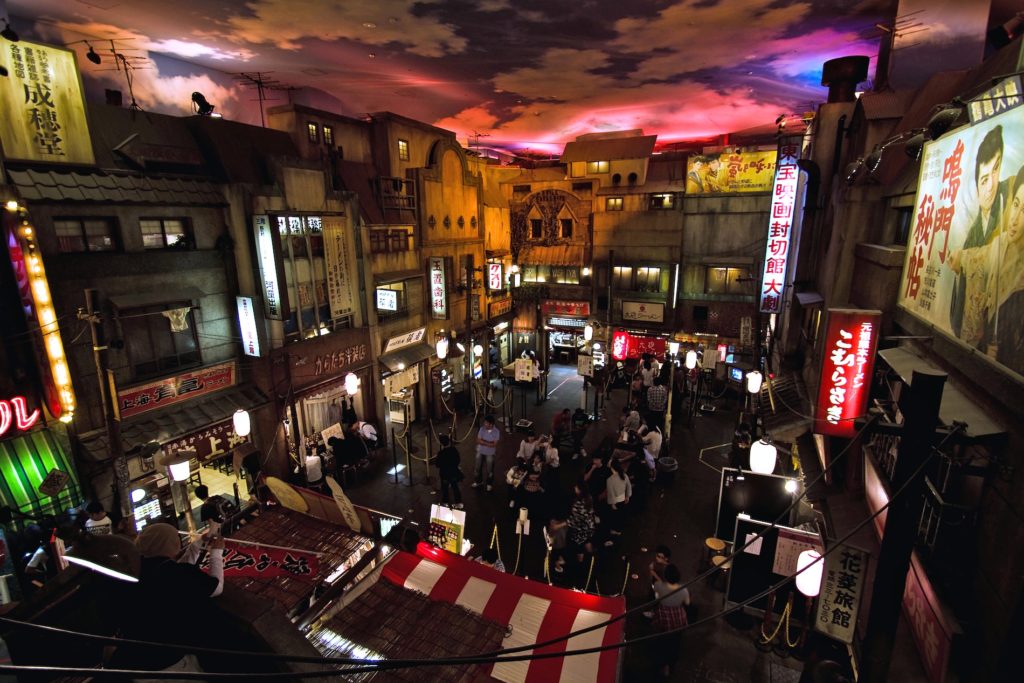 A vacation at the hot springs in a traditional ryokan hotel is something that every tourist should try at least once. The coolest place you can just get to from Tokyo is Kusatsu-onsen, three hours by train or bus. First I recommend walking through the park, where water from hot springs comes to the surface in emerald lakes of boiling water. Then, you can eat street food (grilled river fish or eggs boiled in a hot spring). In the evening, you can enjoy a traditional kaiseki dinner with ten courses and relax in a beautiful hot spring for the guests of the ryokan. Before returning to Tokyo, you can climb the hill where the haiku of the great Japanese poet Matsuo Basho is carved in stone and enjoy a pleasant view of the city. 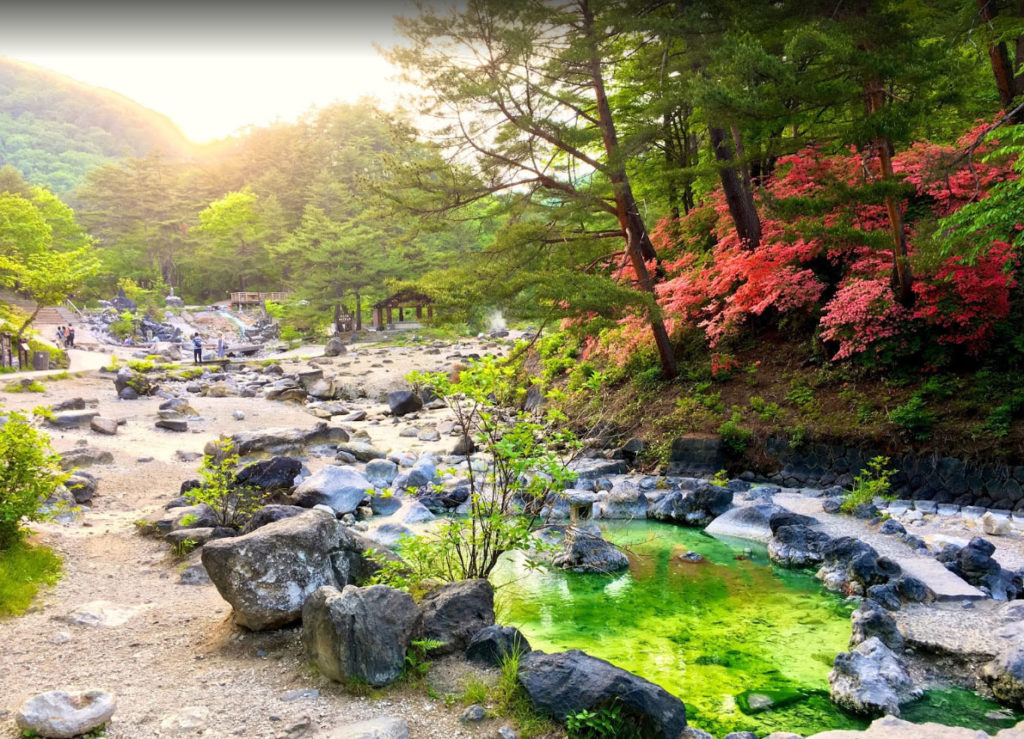 There are plenty of waterfalls in Japan, but one of the biggest and most picturesque is the hundred-meter Kegon Falls in Nikko. You’ll still go to this city because guidebooks recommend taking a look at Tokugawa’s tomb and the temple with the three monkeys. Don’t be lazy to spend an hour taking the bus up into the mountains to Lake Chuzenji, where the water comes down as the Kegon Falls. You don’t need to be physically prepared, because caring Japanese built an elevator, which takes the tourists almost to the foot, to the most convenient place for taking pictures. If you want to show off your muscles, it’s better to rent a boat on the lake and slowly sail along the shore with Shinto shrines, a giant statue of Buddha and a heartbreaking view of the mountains. 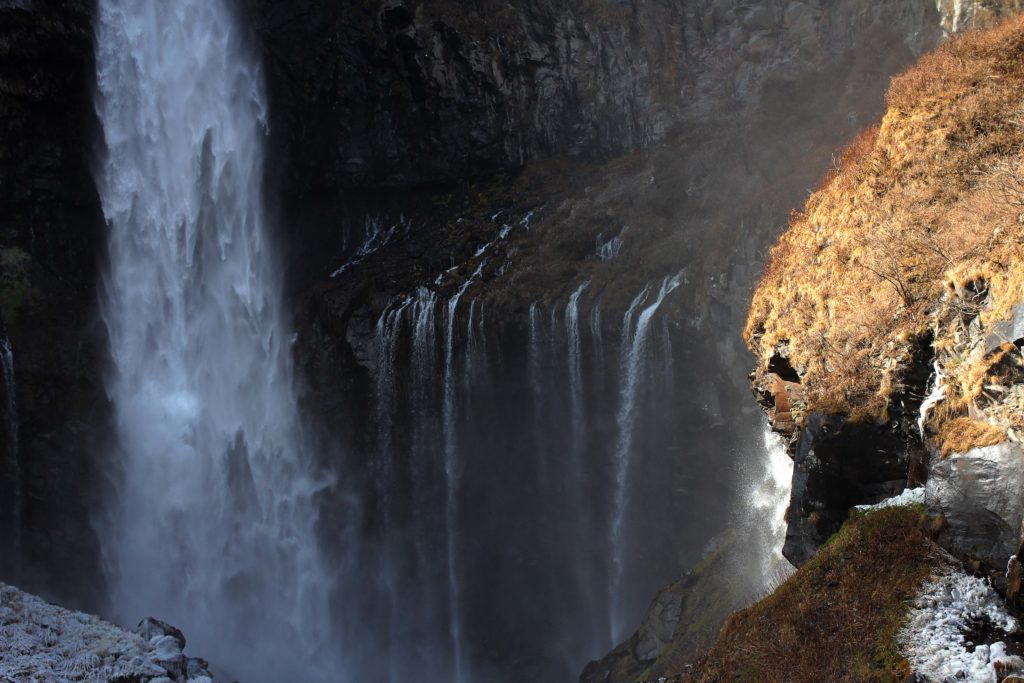 Jugosaki Coast on the Izu Peninsula

Residents of Tokyo go to the Izu Peninsula when they want a break from big cities and mountain scenery. Jugosaki is a place where lava from ancient volcanoes met the sea and solidified huge black rocks. Now they are overgrown with pine trees, and people have paved convenient hiking trails along the coast, fencing off the most dangerous places. People walk leisurely for hours on Jugosaki, stopping to take pictures or buy green tea-flavored ice cream. The volcanic soil is excellent for citrus fruits, and on the way back to the ryokan you can buy delicious mandarins or oranges straight from the branch from the farmers. 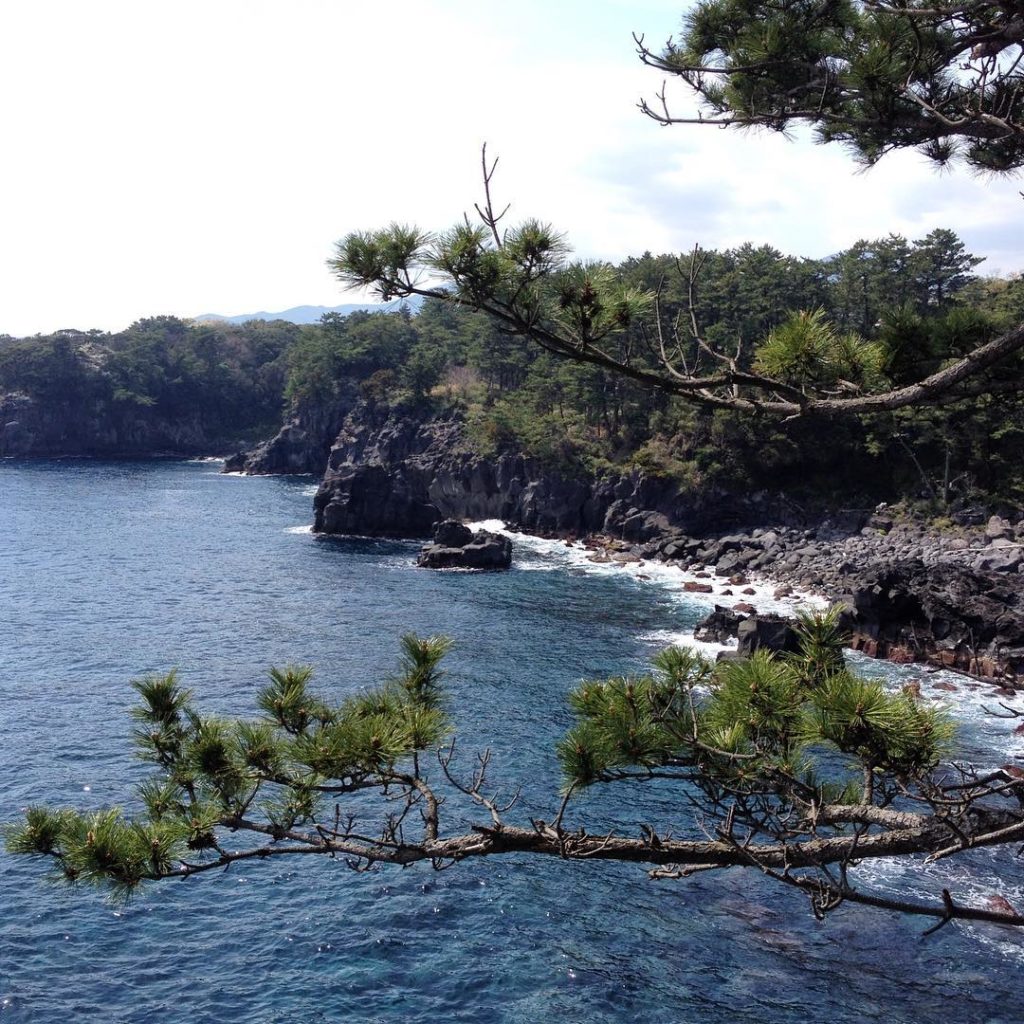 Postal Towns in the Kiso Valley

During the shogunate era, all feudal rulers were required to travel regularly to Tokyo to bow to the country’s true ruler. To make their journey more comfortable, Japan developed so-called “postal cities” in which lords and their entourage could spend the night, dine, and entertain themselves. In the twentieth century, several such towns on the Nakasendo Tract (between Nagoya and Tokyo) were turned into a veritable open-air museum of ancient Japan. The coolest thing to do in the Kiso Valley is to walk through the Nakasendo as real samurai did only a hundred and fifty years ago, and it only takes an hour to get from one town to the next. In spring everything around is in bloom, and in fall you can admire the red Momiji maples. For the night, of course, must stay in the old Japanese gestsuku minshuku with a real hearth in the middle of the house, and the owner will cook you something simple and traditional for dinner. 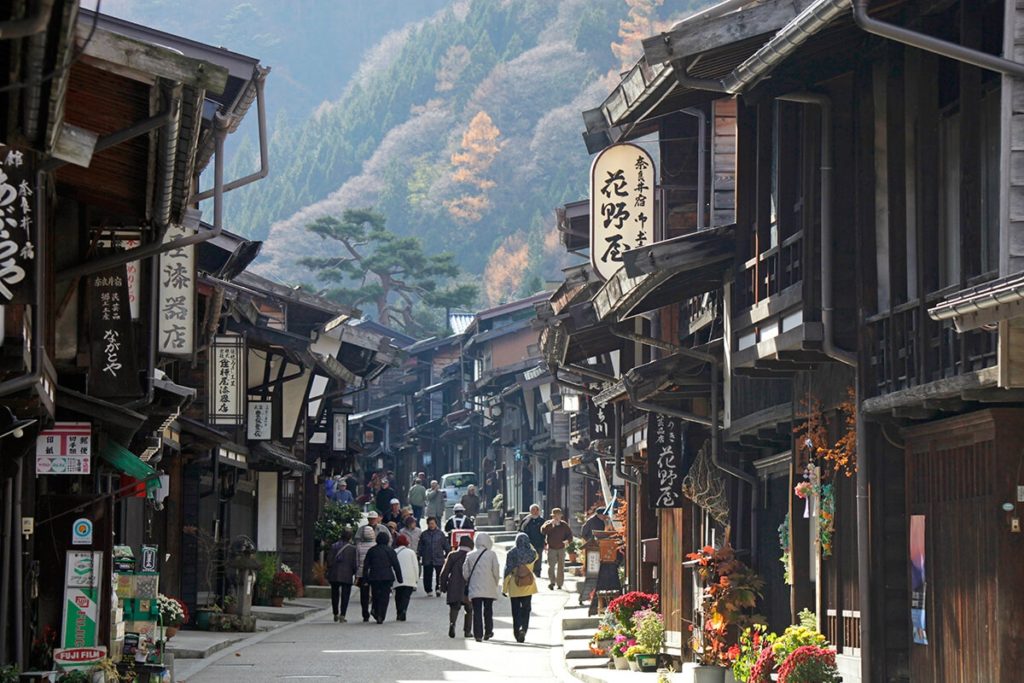 Several hundred years ago the ninja of the Iga clan made an important contribution to the unification of Japan, and now their village has been turned into a huge museum. You can see how the ninja lived, how they hid their equipment and pretended to be ordinary peasants, how they ran on water and hid from their enemies in clouds of smoke. Specially trained actors will show ninja moves, and children can dress up in costumes and throw real star-shuriken around the same place where the legendary Hattori Hanzo once trained. You can get to Iga from Nagoya or Kyoto, with a couple of transfers, but it’s worth it. How else would you know that the ninja costumes weren’t actually black, but blue? 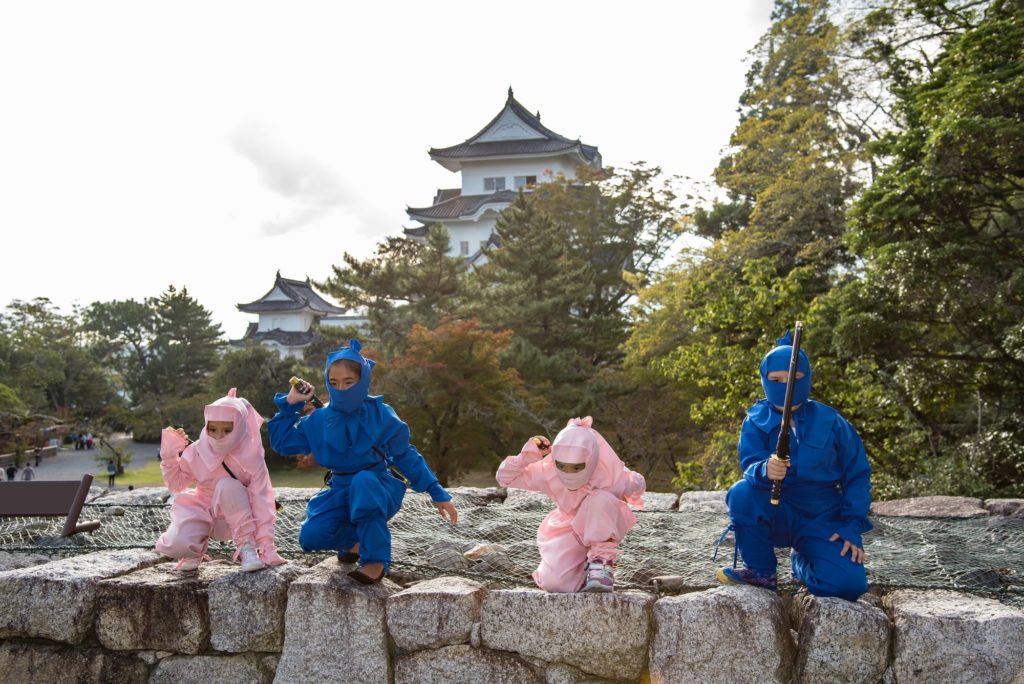 Guides usually recommend seeing the Golden Kinkakuji Temple and the Garden of the Fifteen Stones at Ryoanji Temple, but be sure to check out the Kokedera Temple next door as well. Japanese temples and shrines are usually most interesting in gardens, with all those lovely ponds, streams, bridges, and flowering trees. They are all arranged similarly, but never boring and look cool in any season. At Kokedera, all the surfaces in the garden, including the bridges and stone buddhas, are covered in moss, making the landscape look completely alien. The downside, though, is that some of the trails are closed to tourists – so that the moss doesn’t get spoiled. 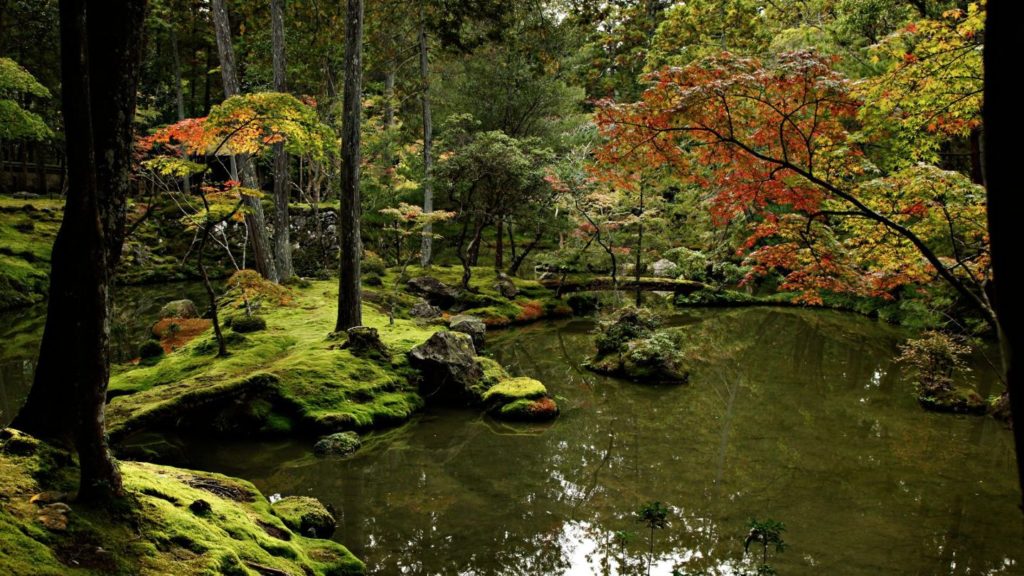 Japan is full of large and small oceanariums, but the best one is in Osaka. On eight floors are specimens of flora and fauna from all over the Pacific Ocean: Ecuadorian river fish, Antarctic penguins, giant Japanese salamanders, a pack of fat tuna, and a huge whale shark. Jellyfish, corals, seabirds, seals – each species has a cool-looking display, and it is at Cajucan that you first learn about the existence of many species of sea mammals. You can take part in feeding dolphins or other peaceful animals, or you can touch a real sticky ray or a real live shark. Not a whale shark, though, but it counts. 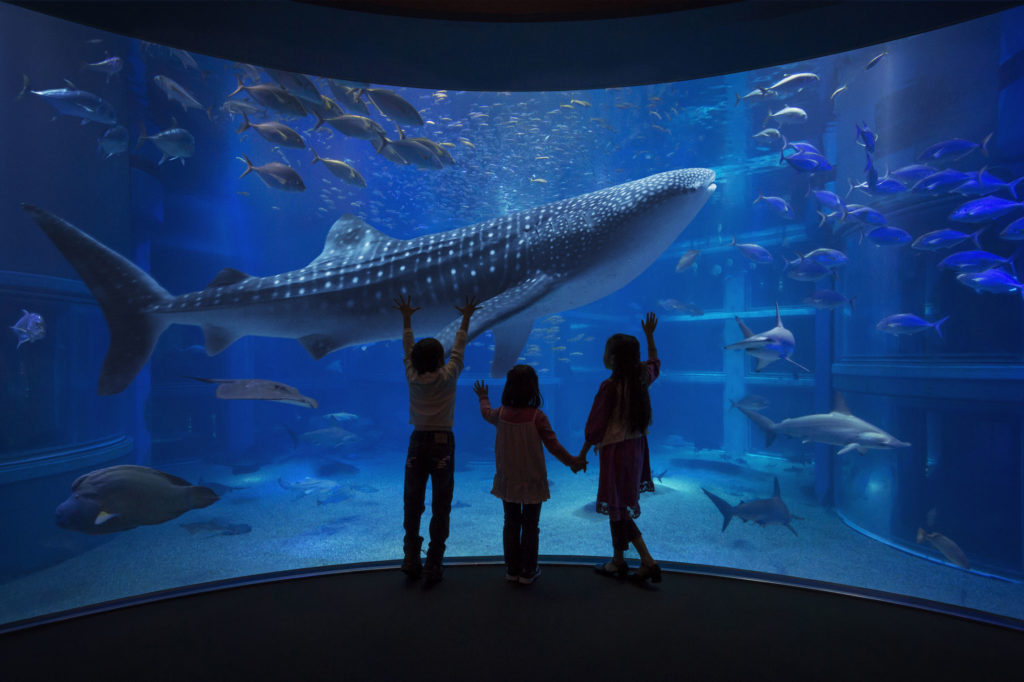 Connoisseurs of modern art must get to Naoshima Island in the Seto Inland Sea of Japan, a frequent ferry service from Hiroshima goes there. On the one hand you can see the traditional rustic Japan, where grannies on the street still bow and say hello to everyone who comes their way. On the other hand, throughout the island scattered ultramodern art installations about the play of colors, shapes and sounds, which come to admire primarily foreigners. The experience will turn out something like this: look at the pond with alarm bells and red laser beams – go into a family restaurant and eat a bowl of buckwheat noodles – get a map and take the bus to the giant spotted pumpkin. 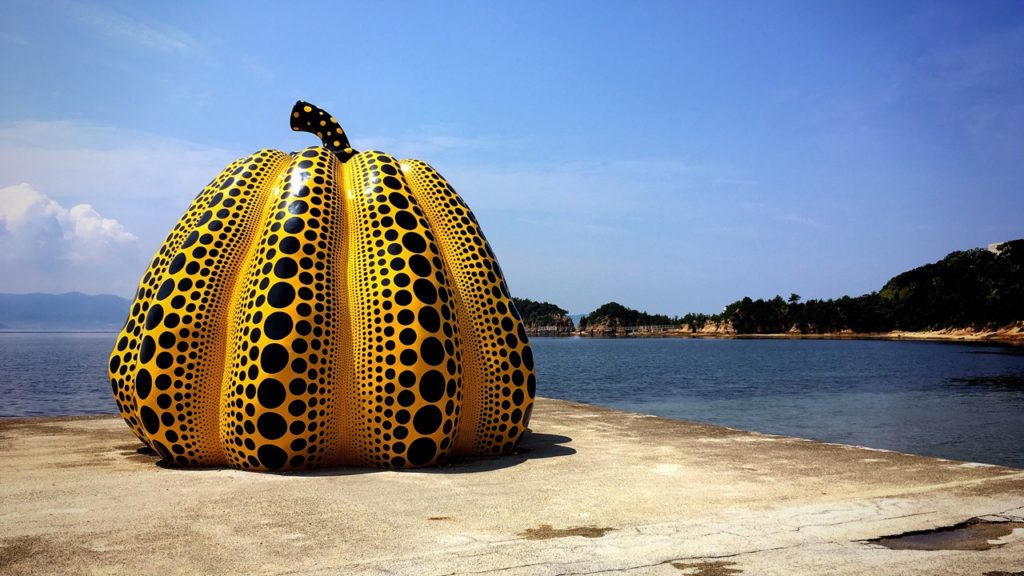 The city of Kagoshima is the southernmost point of Japan, and in the bay in front of it towers an active volcano, Sakurajima. Seriously, it spits out some smoke and shakes the ground a little bit almost every day, although the last serious eruption was years ago. Even the view from the port already justifies the time of the trip. To see the figuratively frozen lava flows, all you have to do is take a ferry to the foot of Sakurajima. The local museum has real seismic sensors, if you can’t tell for yourself if the ground is shaking hard enough or just that, nonsense. A tour bus will take you close to the volcano’s vent for pennies and drop you off at the coolest places to take pictures. Before you sail back to Kagoshima, don’t forget to try the daikon radish, which grows gigantic in the local soil. Take home a black volcanic stone figurine of a cat or a pig. 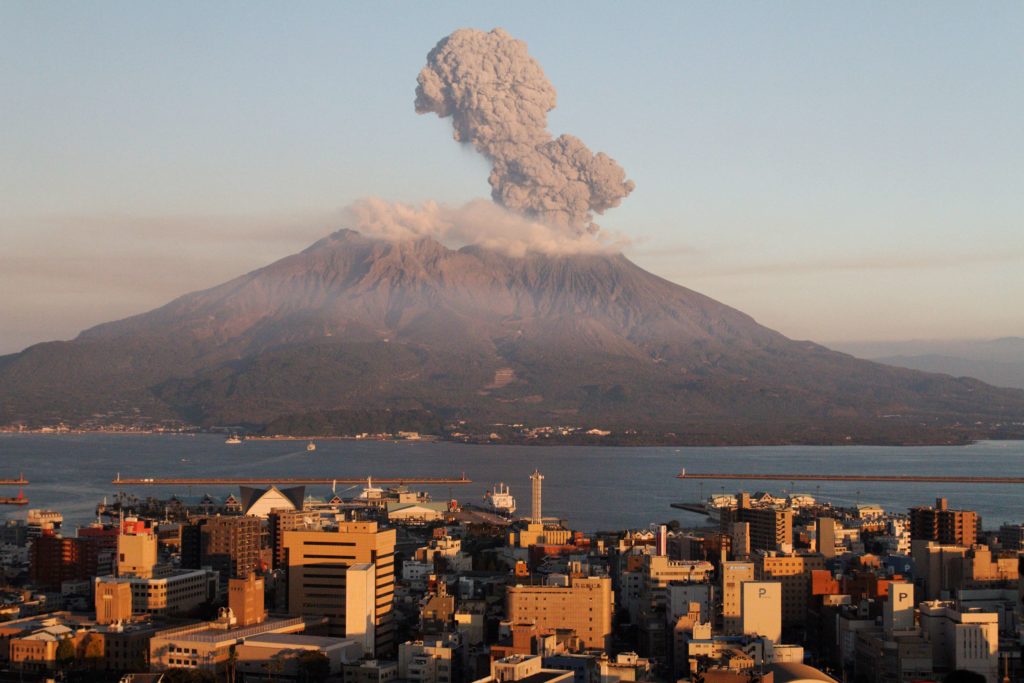