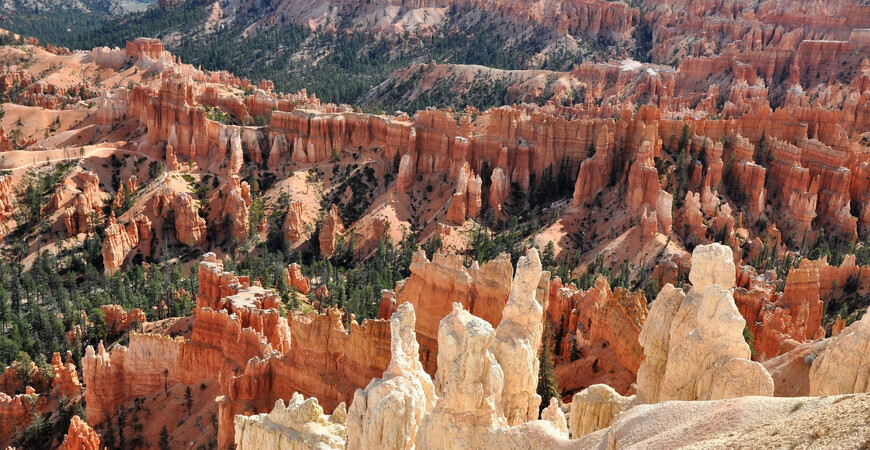 Zion National Park is a territory with a unique ecosystem, natural landscape and climate. The park complex is located in the United States, in southwestern Utah. The protected area is located near the Colorado River. The most famous place in the reserve is Zion Canyon, which is located in the floodplain of the Virgin River.

The park’s landscape and nature attract a large number of visitors from around the world each year. In 2018, more than 4 million people visited the preserve. There are rivers, canyons, natural arches, mountains and hills within the U.S. National Park. The fauna and flora of the reserve is interesting with a variety of species of flora and fauna.

The rock formations of the canyons of the national park are represented by red-brown Navajo sandstone. On the territory of the complex you can try hiking on specially equipped trails, take an excursion program with a ranger or stay overnight in the campsite.

The park area is located in southwestern Utah, in Washington, Iron, and Kane counties. The conservation area is 59.4 hectares in size. Nearby is the town of Springdale, and within 250 kilometers are other national parks in the United States: Grand Canyon National Park, Dixie National Wildlife Refuge, Grand Stearcase-Escalante State Reserve, Beaver Dam Preserve, and others.

The National Wildlife Refuge is located in several plateaus at once – Markagunt and Colob. The northern part of Zion Park has isolated access. The elevation difference in the area varies around 1,600 meters. The highest point is at Horse Ranch Mountain (2,660 meters), and the lowest point is at Coal Pits Wash Valley (1,117 meters).

The entire area is dotted with unusual rock formations created by nature itself. In the east of Zion Park are objects with the names “Checker Mountain” and “Eastern Temple. In the area of Kolob Terrace is a slot canyon called The Subway. In the same area is the Colob Arch.

In addition, there are such interesting landscape objects in the park area: the Virgin River Narrows, Emerald Pools, Angels Landing, The Great White Throne, and others.

Zion Park’s climate zone has hot summers and cold winters with minimal precipitation. Springtime here is a time of abundant rainfall. Wildflowers bloom from April through the month of June. Autumn is usually mild, with cold nights. Summers are hot, with daytime temperatures of +35 … +43 ° C, and nights are cool, but with a comfortable temperature of +18 … +21 ° C. Winter is mild, with little precipitation in the form of snow and storm winds.

The nature of the park

The large area and subtropical climate favorably influences the flora and fauna of the Zion National Park. The diversity of soil and landscape and uneven access to water sources have created a variety of habitats in the area. Within the boundaries of the park zone there are several parts: the desert, the coastal zone, and the forest.

Zion Park is home to about 289 species of birds, 79 species of mammals, 28 species of reptiles and 7 species of the fish family. Deer, lizards, squirrels, rabbits, and rats live in the area. Of nocturnal animals are common here: lynx, coyote, badger and foxes. Thick bighorn sheep was reintroduced to this area in 1973. The park is home to about 20 species of bats. The U.S. national park’s bird family includes jays, golden eagles, hawks, peregrine falcons, swifts, and vultures.

Wormwood and cacti grow at the bottom of canyons and cliffs; juniper, pine trees, yucca, and North American oak varieties can be found on mountain slopes. Willow and maple tree families grow on the flatlands.

Zion Canyon was discovered by the Mormon community in 1858, and in 1860 their settlement settled in the area.

READ
The most prosperous cities in the world

According to research, the land beneath the U.S. national park was inhabited as far back as 8,000 years ago. Traces of the presence of indigenous Indian tribes were found here. The Anasazi tribe was descended from one of the people in 500 AD. During this period the Fremont tribe lived here. Soon the Paiute people came to the area.

The status of a national park was granted in 1909 by the president of the United States. The complex was originally called Mukuntuvip. In 1918 the name of the reserve was changed to Zion, after the estate of one of the Mormons who lived in the area. In December 1919, the status of a national park was officially legalized, and in 1956 the area with Kolob Canyon was annexed to the reserve land.

Prior to the creation of the park, tourism was not developed in the area. In 1910, the old railroad track was converted to a highway, and in 1917 a direct road to Zion Canyon was built. Today, the road to Zion Canyon stretches for 10 kilometers into the park and ends near the temple of Sinava. Then there are hiking trails.

Zion Park is open 24 hours a day, 7 days a week. Depending on weather conditions and time of year, some parts of the park may be closed to the public.

From early spring through late fall, the road to Zion Canyon is closed to cars, during which time free buses run continuously. The bus ride takes two hours, then visitors can walk the hiking trails to Weeping Rock and the Emerald Trail. Tourists find the eastern entrance to Zion National Park to be the most scenic.

Among the interesting natural features are the naturally formed arches. Crawford Arch and Kolob are the most famous. The first is named after the Mormons who settled near this natural object, the second is located in a remote area of the park, but is more popular among tourists.

For a detailed introduction to Zion Park, visitors choose to hike the Narrows Trail. This is a trail near the northern tributary of the Virgin River along the canyon. The renowned National Geographic has placed this trail in its ranking of the best places to travel in America.

A local landmark is the Sinawawa Temple, located on the way to Zion Canyon. This monument of ancient architecture was created in honor of the Coyote deity of the Paiute tribe who lived in the area.

One of the symbols of the national park is The Great White Throne, 671 meters high. Angels Landing offers a beautiful view of the canyons. The mountain is 1,763 meters high and the trail to the top was paved back in 1926. Checker Mountain is a huge natural sandstone object whose surface is naturally divided into squares.

Pristine Towers is another interesting object in Zion Park. A series of sharp rocks stretching along the canyon. Weeping Rock is so named because spring water runs down the slope and drips from the ledges of the mountain.

The main attraction of the park is the Zion Canyon of the same name, which is visited by crowds of tourists every year. The canyon is formed from sandstone of red and bronze hues. This color is due to the iron and manganese in the rock. This is the largest canyon in the park. Its length is 24 kilometers, and the maximum depth in some areas reaches 800 meters.

About a kilometer north of the southern entrance to the park is the Zion Museum of Human History. There are exhibits showing the culture and life of ancient settlements on the territory of the reserve. The Zion National Park Gallery features works by Frederick S. Dellenbach, Howard Russell Butler, and paintings by others depicting the life and nature of the complex.

In Zion National Park there is an opportunity to hike on specially arranged trails, the total length of which is almost 160 kilometers. The official website of the reserve provides a description of each route, where there is a place for camping.

On the territory of the complex there are special trails, on which it is allowed to ride a bicycle. Zion Park is a great place for fans of extreme recreation. Here you can try such a kind of pastime as canyoning – overcoming canyons with the use of various techniques for a complex water-rocky relief.

You can also go down the mountain river on a special watercraft under the guidance of a ranger. In the park there is an opportunity to do rock climbing. There are all the necessary conditions for that. For those who like to meet the dawn or admire the starry sky, the park administration will provide information in which part of the reserve it is best to do.

How to get to Zion National Park

Next to the U.S. park is the town of Springdale. Free buses run to the park from March through late November:

In addition to buses, you can get to the park in your own or rented car via the UT-9 E toll road.