Yalutorovsk – the city of the Decembrists

The city of Yalutorovsk, despite its small size, is famous for its rich historical past and has a second unofficial name – the “city of the Decembrists. The main Yalutorovsk sights are connected with the Decembrists that had a great influence on development of culture of the Siberian region.

The sights of the city on the map 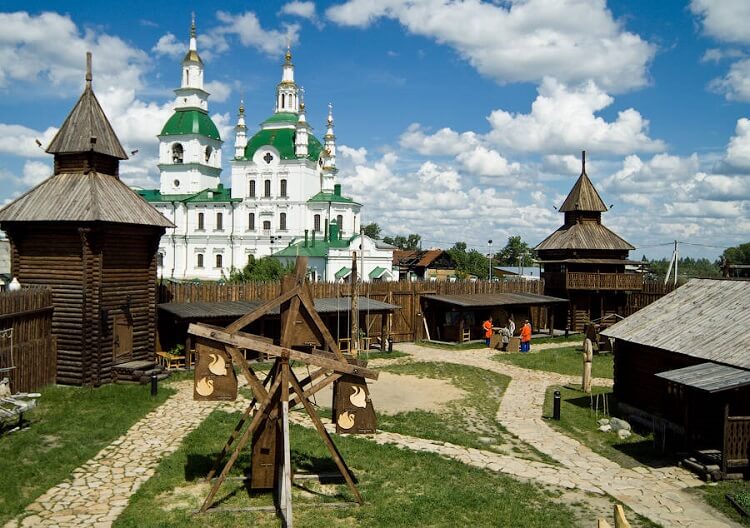 The museum complex is an exact copy of the ancient fortress, which was built in 2009 according to the old drawings, preserved in the archives. The history of Yalutorovsk began with this fortress, intended to protect Tyumen and Tobolsk from nomads’ raids. The use of folk technologies and old building methods allowed recreating the appearance of the settlement as it was at the beginning of its existence in 1659, the time of mastering Siberia.

The center of attraction for tourists is the observation tower, which must be climbed to see the entire territory of the ostrog. 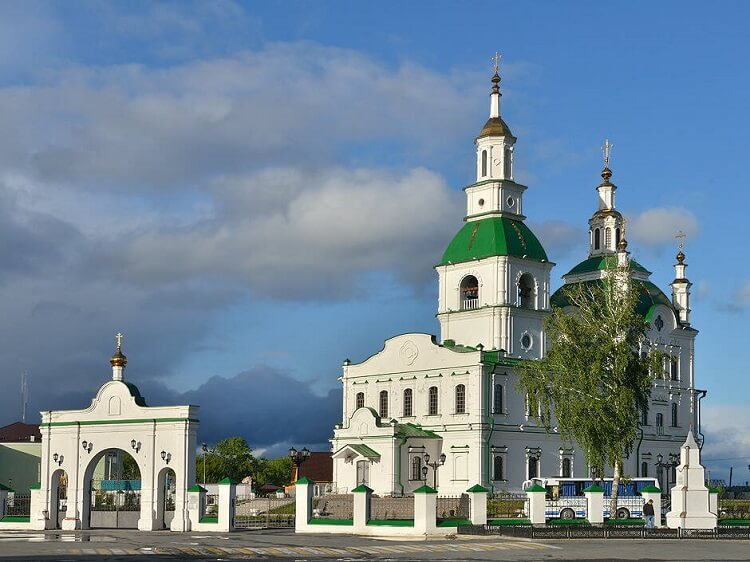 Built in 1777, the Sretensky Cathedral was one of the most beautiful temples in Siberia. Many important events are associated with it. A local archpriest helped the Decembrist Yakushin to open two new schools. Here took place the wedding of the Decembrist Prince Eugene Obolensky with his former serf Varvara Baranova. The temple hosted famous travelers Alfred Brehm and Otto Finsch. And the year 1837 is remembered for a solemn prayer service in honor of the visit of the future Tsar Alexander II.

But fate did not spare the cathedral. The beautiful building, erected in the style of the Siberian baroque, began to fall into disrepair in 1903. Serious errors were made in the design, resulting in cracks in the vaults, and in 1908 services were halted due to the need for urgent repairs. Restoration work was completed in 1917, but the Soviets came, the building housed a youth club, and in 1931 it was decided to destroy the cathedral. Bricks were needed for other, more important buildings – the House of Culture and the baths.

In 2003, it was decided to recreate the Sretensky Cathedral again, according to the plans that had survived in the archives. Six years later its bells sounded, announcing that the restored cathedral was ready to welcome religious believers under its vaults. 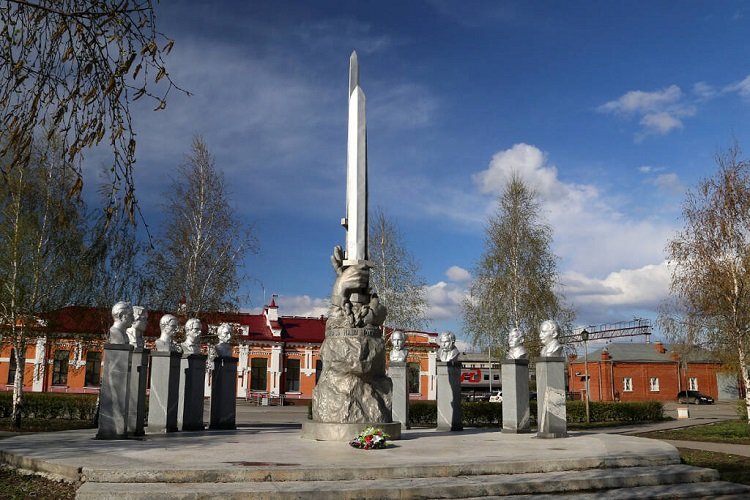 On December 26, 1825, the Decembrists revolt took place on the Senate Square in St.-Petersburg. It was attended by the most educated, prominent young noblemen, heroes of the Patriotic War of 1812, the so-called color of the nation. The goal of the uprising was the abolition of serfdom and autocracy, and the adoption of a constitution.

The revolt was suppressed. 579 people were involved in a secret investigation. The participants of the uprising were divided into categories, based on their role in the conspiracy. In addition, five people were sentenced to death and hanged – Pestel, Ryleyev, S. I. Muravyov-Apostol, Bestuzhev-Ryumin and Kakhovsky. Many of the rebels were sent to perpetual servitude in Siberia.

The Decembrists played a major role in the cultural development of Siberia. Being in Yalutorovsk from 1829 till 1856 they were engaged in extensive educational activities. V.K. Tizengausen taught locals to cultivate new varieties of fruit trees and bushes. I.D. Yakushkin left a bright mark in the development of education, becoming the founder of a free school for boys and the first school for girls in Siberia. A.V. Yentaltsev, versed in medicine, devoted himself to the free treatment of townspeople and peasants. Obolensky, Muravyov-Apostol, Basargin, Vranitsky, Cherkasov, and Pushchin also took an active part in city life.

The station square with the busts of exiled Decembrists is one of the important sights of Yalutorovsk. In the center there is a stele with swords pointing upwards. They are firmly clutched in hands chained in chains.

The memorial, which immortalizes the images of nine Decembrists, is a place where the townspeople and visitors of the town come to pay their respects to these people for their unselfish charity work. The author of the monument is sculptor V. Matrosov.

The Monument to the Founders of Yalutorovsk 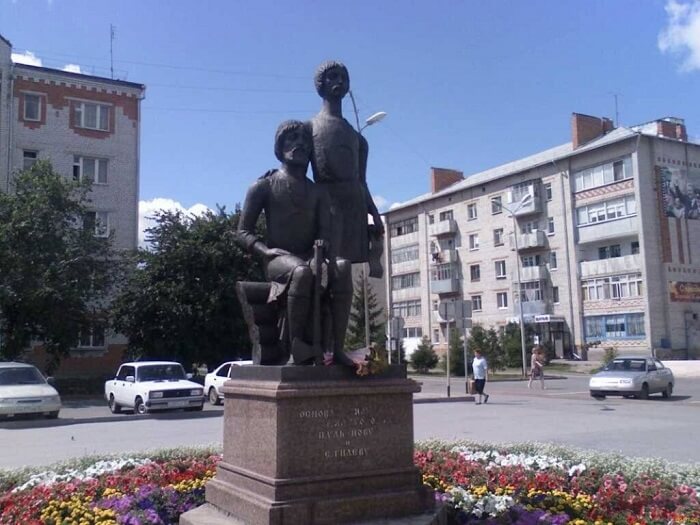 The first documentary mention about Yalutorovsk was a letter sent by the governor F. Veregin to Tsar Alexey Mikhailovich in 1659. In it he mentioned the foundation of a settlement on the Tobol bank by two peasants Petrushka Ulyanov and Eliseika Gilev.

A monument to the founders of Yalutorovsk is erected at the crossing of Sverdlov and Lenin streets. Peter and Yelisey are depicted in simple peasant shirts. One of them is holding an axe, a symbol of creation. The other is clutching a scroll authorizing the construction of the city. 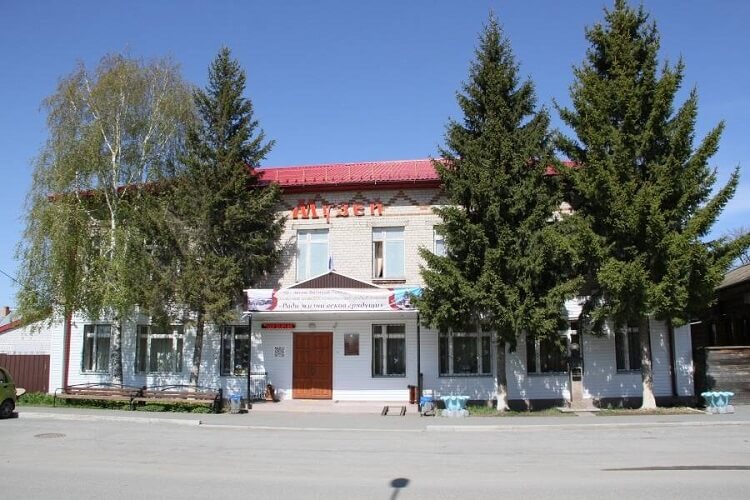 The Local Lore Museum contains expositions devoted to different stages of the formation of Yalutorovsk. The first hall tells about the ancient inhabitants of the Neolithic epoch, who were engaged in fishing. The next collection tells about the details of the development of Siberia and the life of the first settlers. Separate exhibitions are connected with the events of the XIX-XX centuries, the Soviet era, the Great Patriotic War and the present.

In addition to seeing the exhibits, in this Yalutorovsk sight you can take part in master classes and attend thematic lectures.

The house-museum of the Decembrist M. I. Muravyov-Apostol 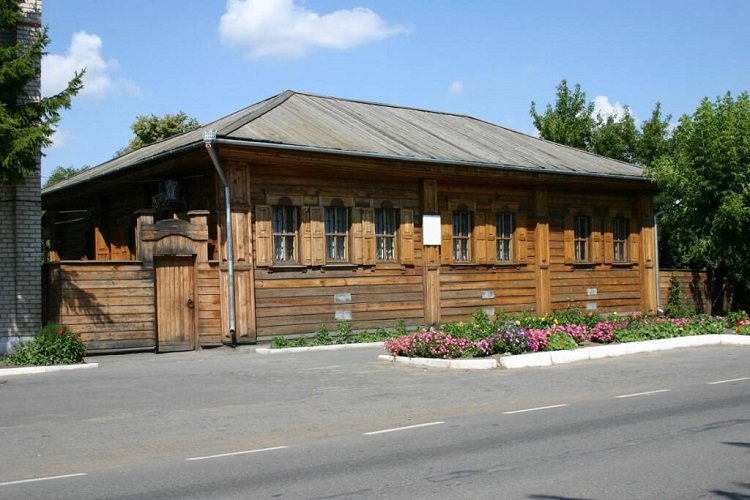 M. Muravyov Apostol was a highly educated man, he studied in Paris and St. Petersburg. He participated in the battles of the Patriotic War of 1812 and became the ideological inspirer of the secret political organization “Salvation Union”. For his involvement in the uprising of the Chernigov Regiment he was sentenced to life exile in Siberia, where he changed several places of settlement. In 1936 he was sent to Yalutorovsk where he lived for 20 years until his amnesty.

For many years his shelter was a former wooden house of merchant Belousov, where Matvey Ivanovich first rented several rooms. After the death of the owner was able to buy the house from the heirs. 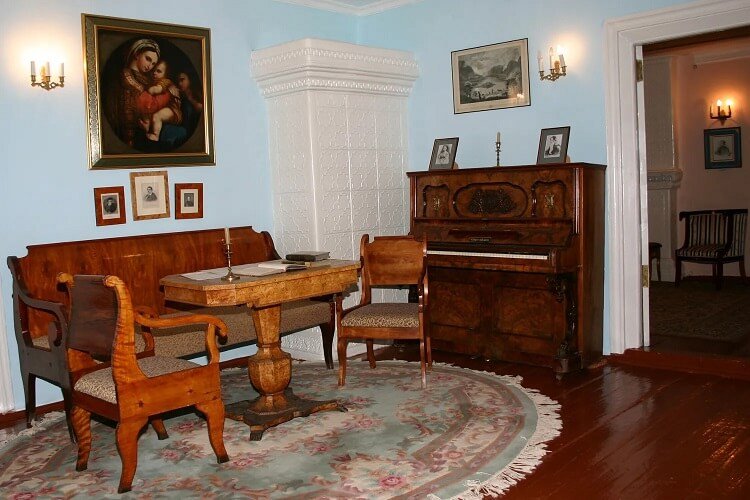 Now there is a museum in the house, devoted to the life of the Decembrists. Here, secretly from the police, were arranged meetings of exiled friends. Many interesting details of their activities in distant Siberia became known thanks to an unusual find – a note addressed to descendants, which Muravyov-Apostol immured in a bottle and hid under the floorboards. Now this vessel is one of the main exhibits of the museum.

House Museum of the Decembrist I. Yakushkin. 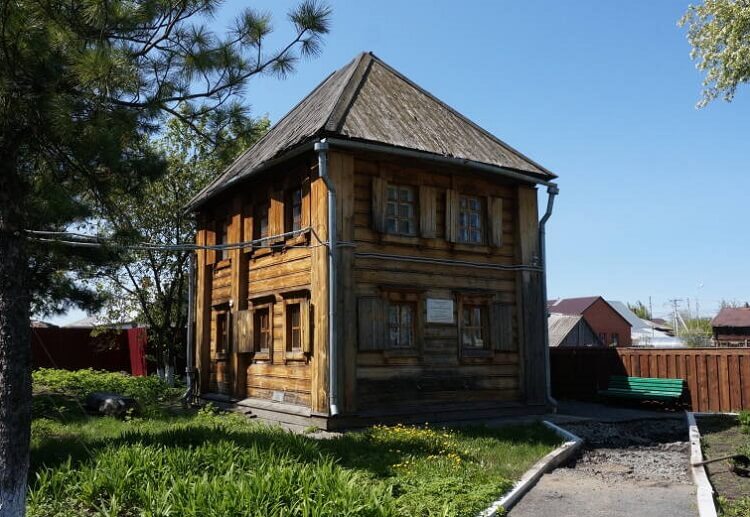 Next to the Muravyov-Apostol homestead there is a wooden house, two rooms of which were rented by I.D. Yakushkin. The owner of the small two-storeyed mansion was Feodosiya Rodionovna Trapeznikova, a Yalutorovsk petty bourgeois. She herself occupied the first floor, and rented out the rooms of the second floor.

Now there is a museum devoted to this outstanding person. Ivan Dmitrievich received a brilliant education and was notable for his varied interests. For example, his hobbies were meteorology and botany. His journal with descriptions of local herbs and drawings of insects is stored in the museum. It is known that Yakushin led a markedly modest lifestyle, avoided luxuries, and devoted all his time to science, pedagogical work in the local school and charitable activities. 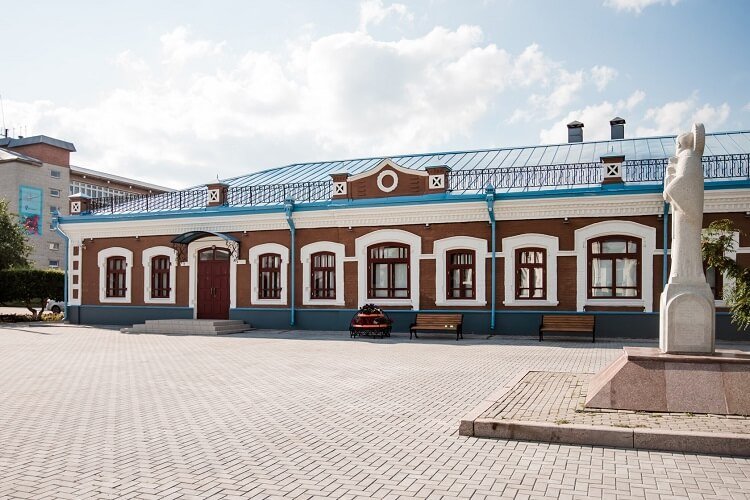 In 1834 the Yalutorovsk merchant family initiated the construction of a new inn. The complex included wooden shops, living houses, warehouses and offices. Here the trade took place, the goods were stored, and guest merchants lived. In 1901 a warm stone store, which belonged to the merchant Lagin, appeared next to the wooden buildings.

The buildings of shopping malls always served their intended purpose. Even during the Soviet rule they were used as stores. Nowadays the rows of shops have been restored. There is an exhibition gallery, where you can get acquainted with the works of Tyumen masters.

The building of Women’s School 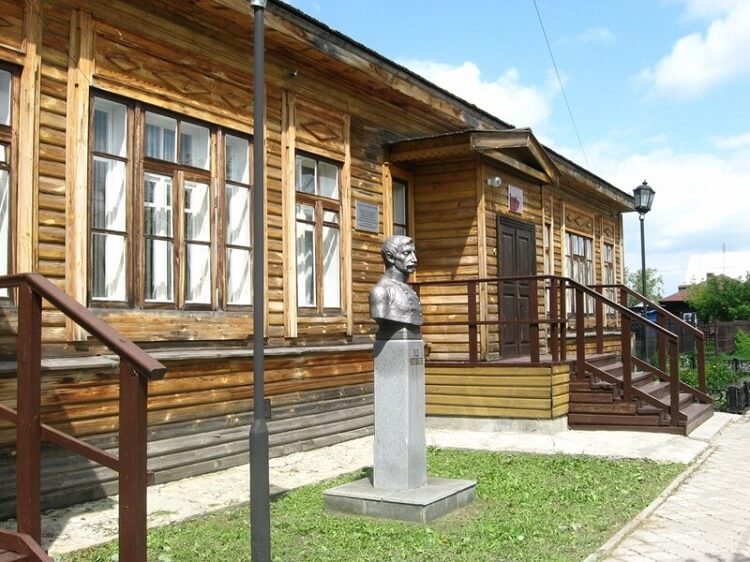 The construction of the first school for women in Siberia was initiated by the Decembrists. The school was opened in 1846 thanks to donations of the Yalutorovsk merchants. Its charter was drawn up by P. N. Svistunov, and some subjects, including botany and zoology, were taught by I. D. Yakushkin.

The teaching was based on an advanced system for those times, based on the use of visual tables. Such a method significantly accelerated the process of initial literacy acquisition.

After the Decembrists were granted amnesty and left Yalutorovsk, the school was taken over by the Ministry of Education. In 1874 it was transformed into a gymnasium, for which another building was soon found. The old school building was raffled off in a lottery. It was not until the 1990s that it was rebuilt. Next to the main entrance is a bust of Yakushkin. 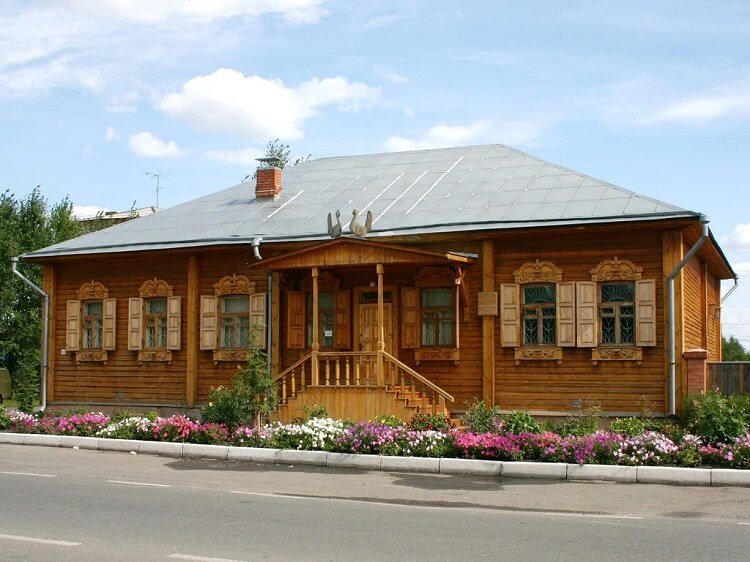 Museum is located in a beautiful wooden mansion at the beginning of the last century, which belonged to the merchant S.K. Vorobeychikov. Expositions devoted to different eras offer an insight into ancient fossil animals, as well as learn about the peculiarities of the local fauna and flora. A well-preserved mammoth skeleton is of particular interest.

In the “Ecological yard” the natural habitat of forest dwellers is recreated. There is a bear’s den, a badger’s hut and many other interesting natural nooks. 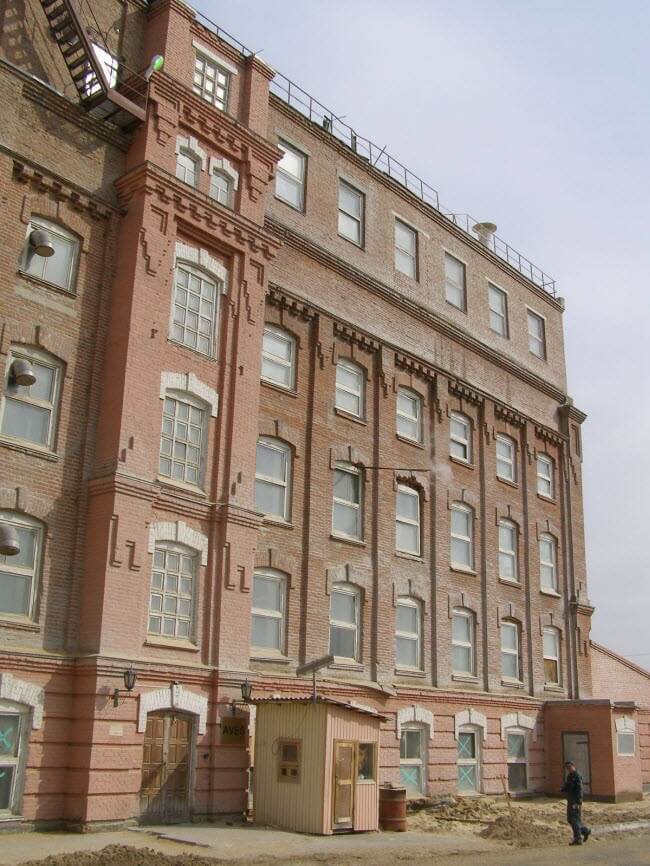 In 1912 the steam mill was built on money of the merchant E.D. Guseva. The construction was equipped with German equipment and included eleven roller mechanisms, which were driven by a powerful steam engine. The mill produced 70 tons of flour per day and was a real miracle of technical thought of those times. It was also the first mill in the city with electric lighting.

The art nouveau brick building is considered a unique example of industrial construction at the beginning of the 20th century and is still working. After a series of technical reconstructions, the Unigrain Company, a cereal factory focused on dietary nutrition, was located there.

The grove of the Decembrists 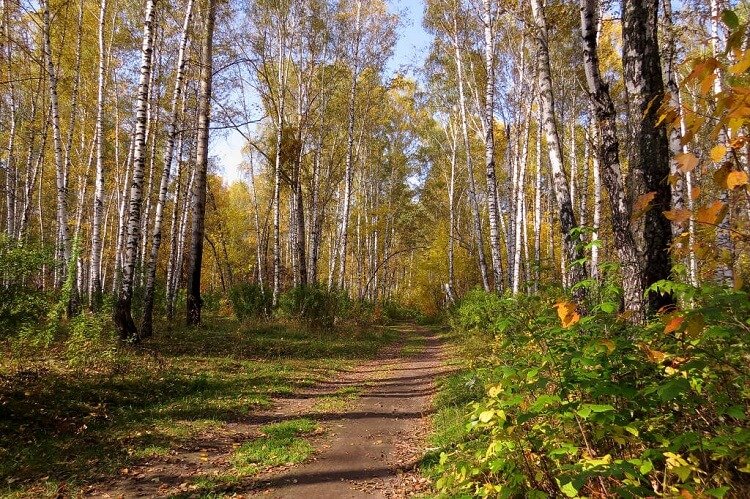 The birch forest on the outskirts of Yalutorovsk, where the Decembrists liked to walk, is still the place of rest for the townspeople. The Decembrists were not allowed to go farther from the town, and this green spot was the only place for them to enjoy the nature. They studied the flora and fauna and initiated the planting of new trees and shrubs.

Since 1968 the grove has been named after the Decembrists and is a protected natural monument. 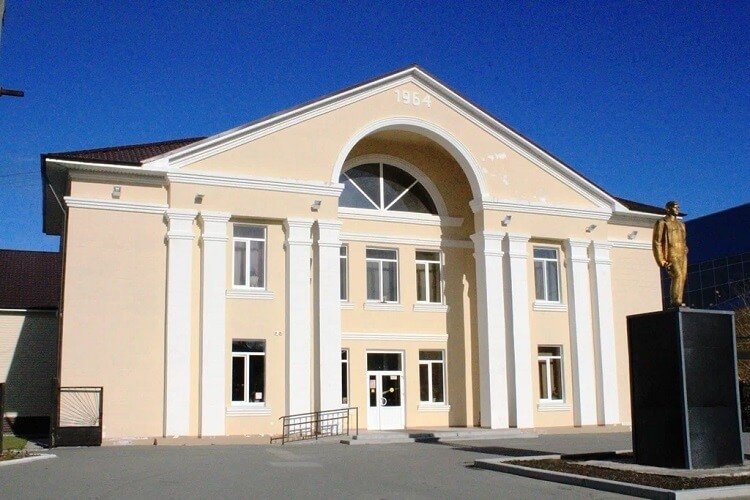 The building from 1964 with snow-white semi-columns and stucco friezes is one of the most beautiful and elegant in the city.

Yalutorovsk is a multinational town, which unites more than 56 nationalities. That is why it was decided to open the center, which will act as a conductor of ideas on strengthening of friendship between peoples. The main way of unification is always creativity, so much attention is paid here to the development of original culture, the study of history, the revival of folklore, the creation of groups of amateur folk groups.

Concerts organized by the Center of National Cultures include dance and vocal performances by Tatar, Cossack, Kyrgyz, Russian and other groups. The program also includes theatrical performances and instrumental groups.