One house, one town. City of Whittier, Alaska, photos and interesting facts about the unusual city in the United States

Photo of the city of Whittier – how the entire city fits into one house. How does the city look from the inside, under the roof of a high-rise building?

How would you imagine a city of 205 people? A city on the shore of a deep strait and surrounded on all sides by high mountains. Most people would picture a small fishing village, with detached wooden houses. Boarded boats tied up along the shore, and the rare locals who look at a stranger with suspicion and whisper excitedly about something. That’s exactly how I would have imagined a town like this. But, in the state of Alaska, in the United States, things are quite different. The town of Whittier is located on the shore of the deep Prince William Sound. Its key feature can be called the fact that the whole town, or rather all of its residents, occupy only one house (photo above). That is how, historically, more than 200 people settled in one multi-storey building, called Begich Towers. Here, in addition to apartments, this high-rise has its own hospital, police station, indoor playground with an indoor pool, as much as two supermarkets, cafes and a hotel.

What do Whittier residents do for work?

Just imagine, some residents can afford not to leave their home for months at a time, because all the infrastructure is within walking distance. All you have to do is press the elevator button with the right floor and you’re already in the store.

The main source of income for Whittier residents is fishing. Also, here well earn on tourists, who by thousands visit the unusual city-home, especially in the summer season. Thanks to the deep-water bay, huge cruise ships easily approach the shore.

In winter, the city is covered with snow, which reaches six meters in thickness. In such a snowy winter, the residents have to move around the city through snow tunnels.

READ
The unobvious sights of Spain

One house is an entire city. City Whittier (Whittier) Alaska, photos and interesting facts about the unusual city in the United States https://www.adn.com

The road to Whittier

There are two ways to get out of the town:

The tunnel is 2.5 miles (4.023 km) long, and there is a toll of $15, or $500 per year, to pass through the tunnel. The tunnel is one-way and the direction of traffic changes every 15 minutes, and at night it stops altogether. Some Whitter residents commute daily to work in Anchorage, 95 kilometers northwest of Whittier. Another local joke is “if you want to see the sun, go to Anchorage. The fact is that because of the high mountains Whittier is devoid of sunlight from November to February, which can not be said about Anchorage, which is located on a more open area.

A military base, a tsunami, and the first residents. History of the emergence of the town of Whittier

Whittier was originally conceived as a U.S. military base. However, after a strong 5-minute earthquake of 9.5 magnitude and the resulting tsunami, with waves reaching 13 meters, the infrastructure of the military camp was severely damaged. The military decided to leave the base. But, the civilian personnel serving the military unit had already become accustomed to the place. Over time, the settlement gained the right to be called a city.

The town of Whittier, Alaska, USA. Aftermath of 13 meter tsunami in 1964 https://lh3.googleusercontent.com

As we said earlier, Whittier is a port for the Alaska Marine Highway. Thanks to the deep water strait, even the largest cruise ships can easily call at the city’s port and bring tourists here, by the thousands. If you’re going on a tour in Whittier, even in the summer, don’t forget to bring warm clothes. The average daily temperature in the city in the summer season ranges around 13 ° C. It also rains here all the time, thanks to the calm ocean nearby.

Other photos: The city of Whittier, Alaska, USA 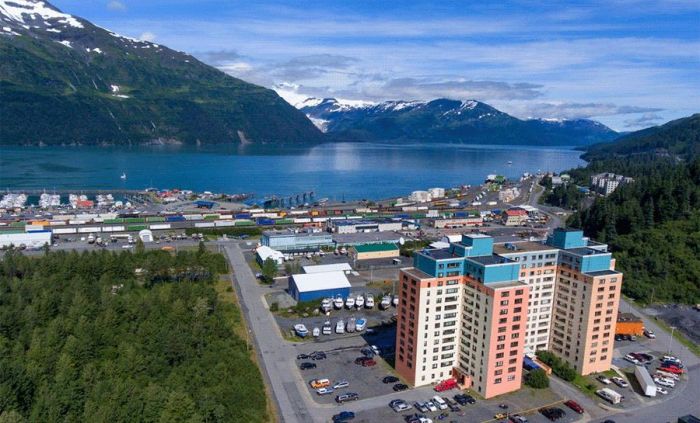 There is a tiny town in Alaska in an amazingly beautiful place, but with an unusual history and a complicated fate. And the most remarkable thing about the current situation is that its entire population of 220 people live in . one 14-story house. 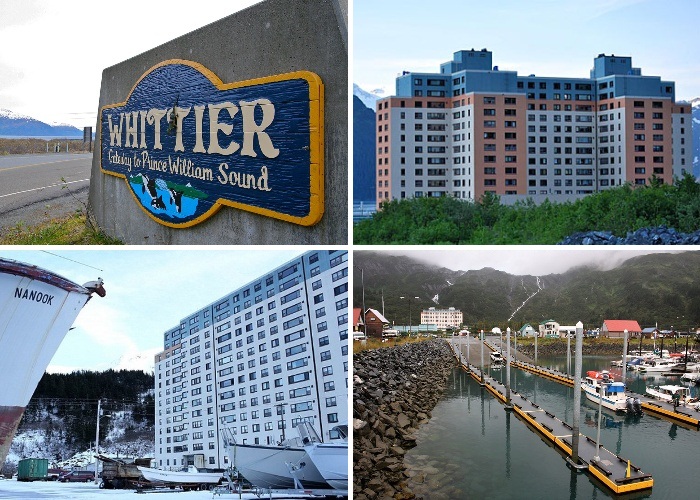 Whittier is a unique town on the planet with only one residential building (Alaska, USA).| Photo: zen.yandex.ru

In northeastern Alaska, the small town of Whittier is nestled among mountain peaks, wild forests, waterfalls, and glaciers. It appeared on the map after the war, when there was a naval base here, because this is where the ice-free deep-water bay is located. 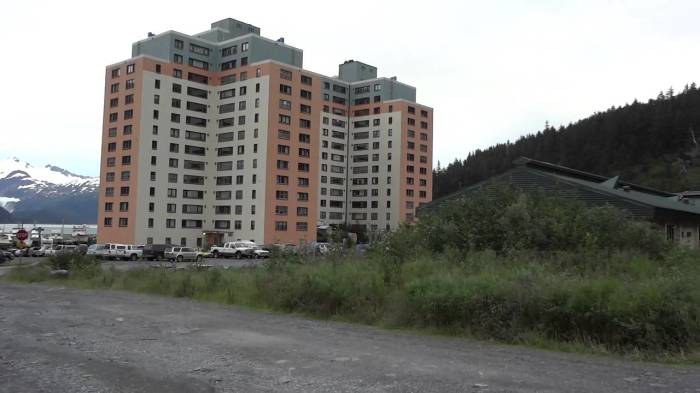 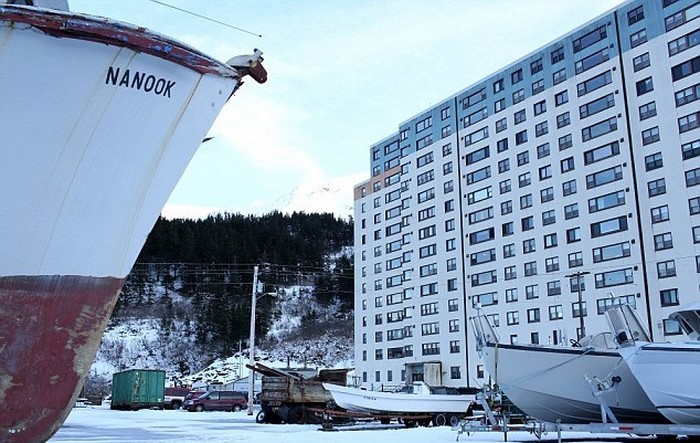 According to the editorial board of Novate.Ru, there was no land connection with this place at the time, the military got here only by ships or boats, so they had to cut a 3-kilometer tunnel in which they laid not only the road, but also the railroad.

READ
Getting around Verona, Italy 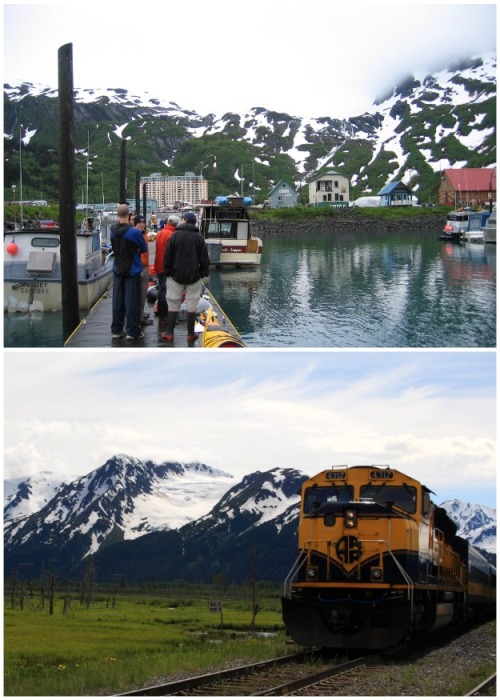 Thanks to this secluded corner of pristine nature attracted people who worked in the port or serviced the military base. 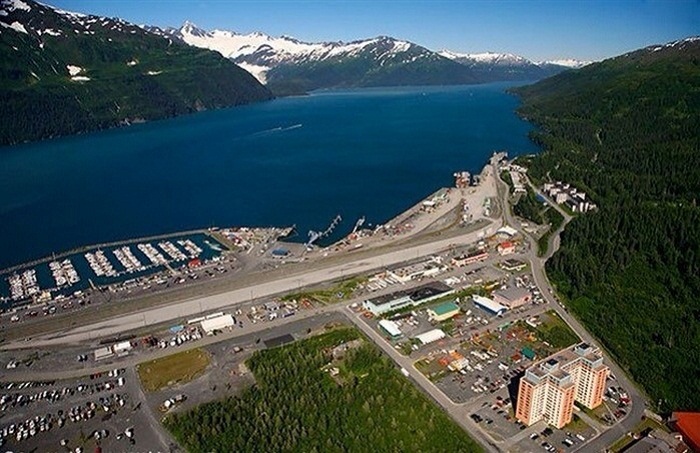 Over time, the town’s infrastructure grew, with a school and a hospital, hairdressing saloons and a clubhouse, not to mention stores and cafes, as not only warships called at the built port, but also huge cargo liners. 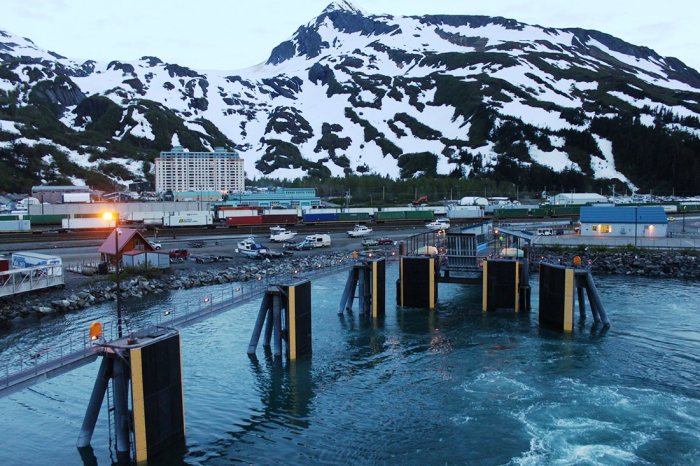 The harsh life of a tiny town with no sun for 5 months (Whittier, Alaska)| Photo: topvoyager.com.

After the civilian population was relocated to the region, the authorities built simple cabins for the service personnel, but for the military they built not only military housing, but also a 14-story Begich Towers building. 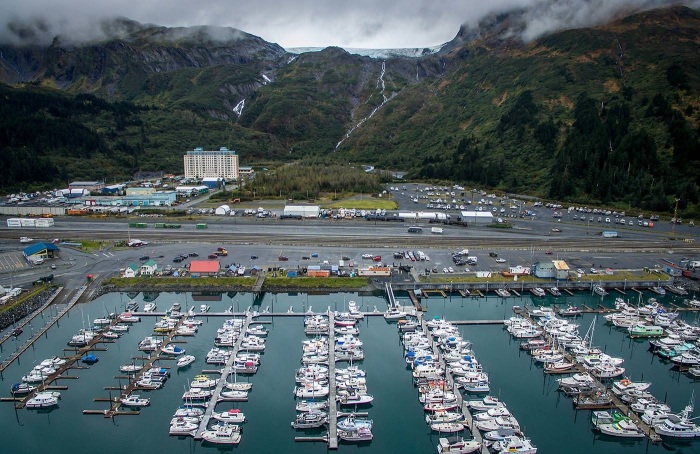 Noteworthy: This is the only building of such height in the whole state was designed by architectural engineer Anton Andersen. Begich Towers (originally the Hodge Building) was named after Alaska Congressman Nick Begich, who died in a plane crash. 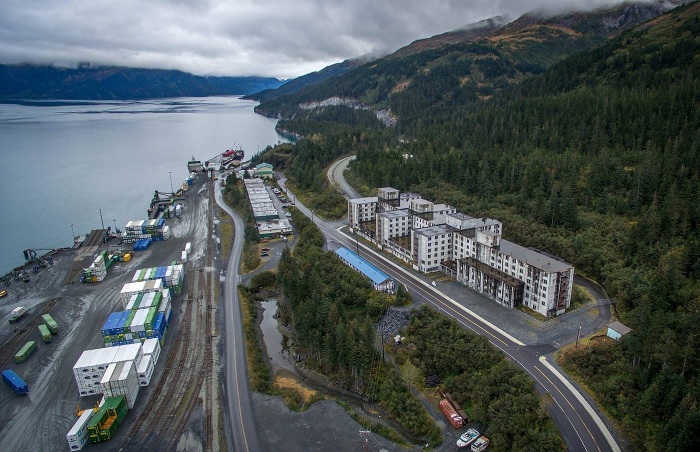 Remains of the military base premises, entry to which is guarded and strictly forbidden (Whittier, Alaska. | Photo: macos.livejournal.com.

Since it was not an ordinary building, but an entire city with its own established infrastructure to meet the needs of the military, in addition to living quarters in it were organized commandant’s office, medical unit, dining room, gyms, recreation areas, laundry, library and even a church. 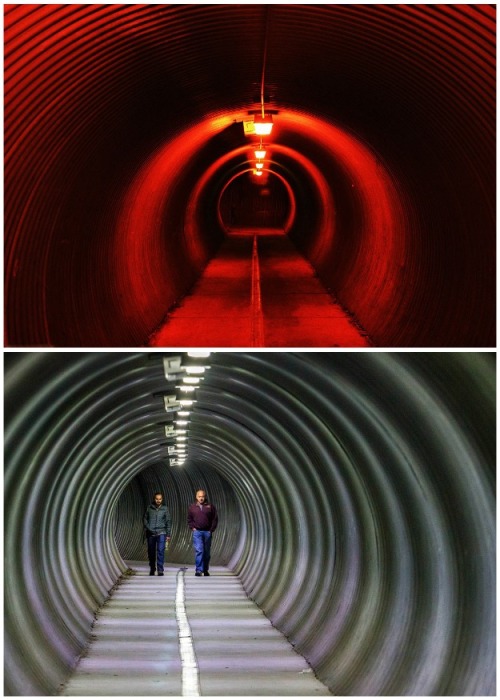 A few tunnels remained through which in bad weather you can easily get to the port or to the lighthouse (Whittier, Alaska.| Photo: topvoyager.com.

But in the spring of 1964, during the Great Alaska Earthquake, the strongest in U.S. history, the onset of a tsunami and landslides almost the entire town was reduced to rubble. 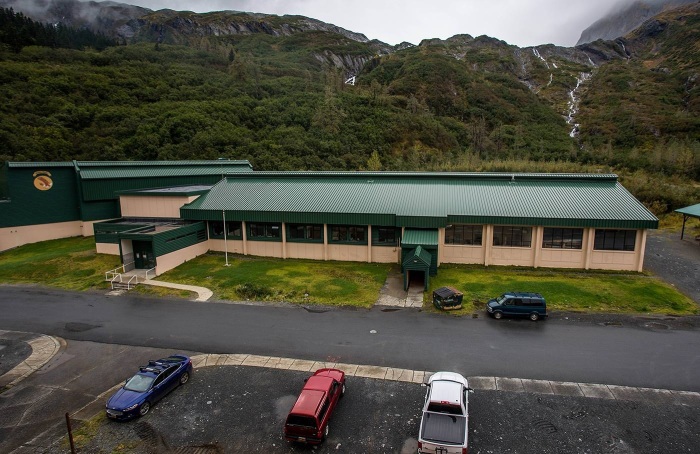 And even the 14-story building was damaged, but military engineers were able to rebuild it in no time. But after the incident, the country’s leadership decided to remove the base from this place, so the military soon left the area. 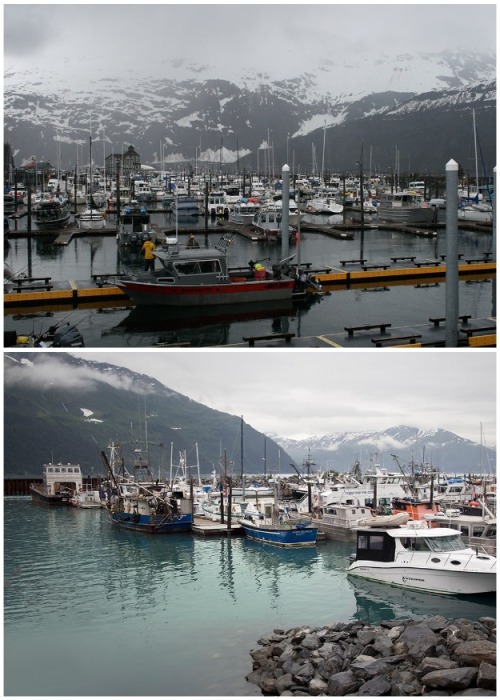 And the people who worked at the port, and the service personnel still remained here to live. They just moved into the only surviving house for a while to wait for the rebuilding of their homes. 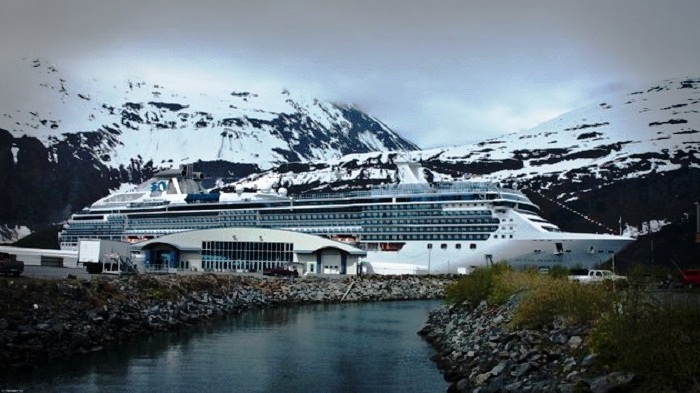 But the authorities were in no hurry to do so, and over time, the residents really liked their new home-town, because everything in it was so reasonably planned and arranged, that now they do not want to move anywhere. 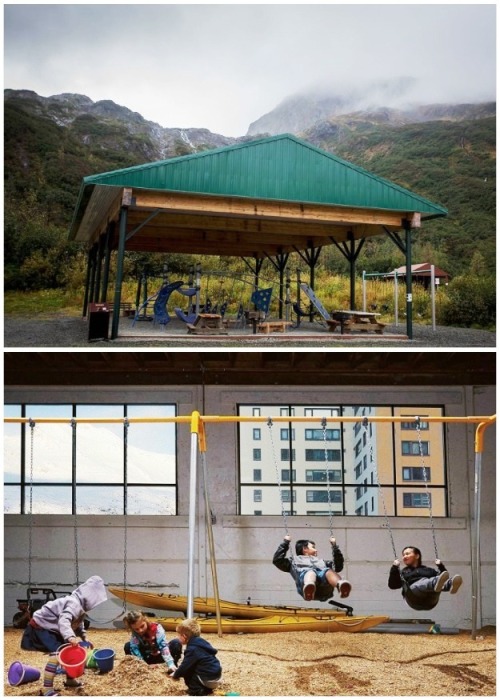 In the short summer the children can play outside, but the rest of the time they can only play indoors (Whittier, Alaska. | Photo: dlyakota.ru.

And it is no wonder, given the elaborate infrastructure inside the building, they now have to leave the cozy room only on three occasions: when the adults go to work and the children go to school, or when they want to go for a walk in the fresh air. 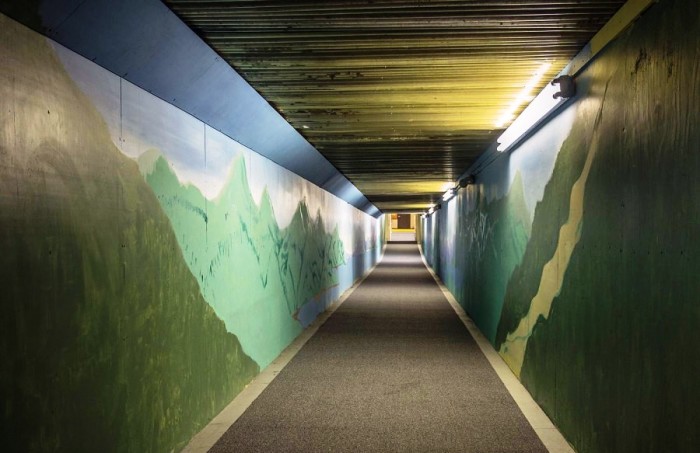 In winter, children can get to school only through a tunnel (Whittier, Alaska).| Photo: dlyakota.ru.

And in the winter cold, the children don’t have to wander through huge snowdrifts, because they have a tunnel to their school. The rest of the time they have everything they need under the roof of the only house in the city. 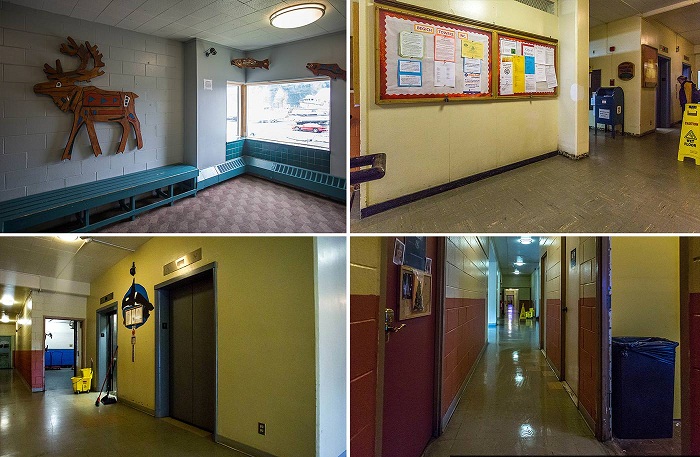 The long corridors act as streets in the huge communal apartment in which the townspeople live (Whittier, Alaska). | Photo: macos.livejournal.com. 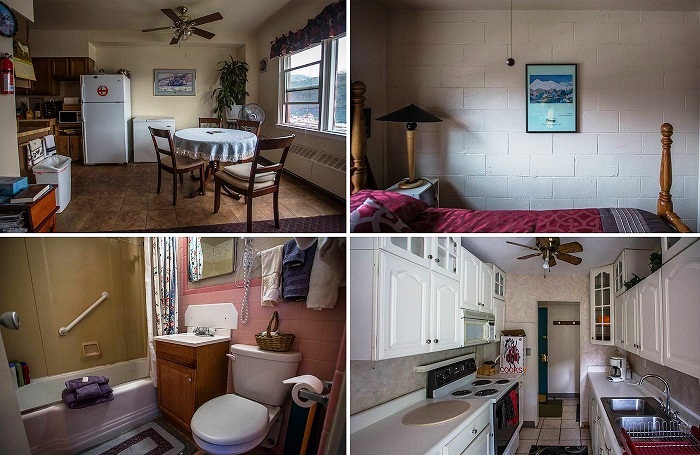 Interior of a standard apartment in the only house in town (Whittier, Alaska).| Photo: macos.livejournal.com.

Of course, some rooms have been remodeled and now, here you can not only visit the doctor or take a book, but also go to the beauty salon, buy fashionable items or food in the stores. 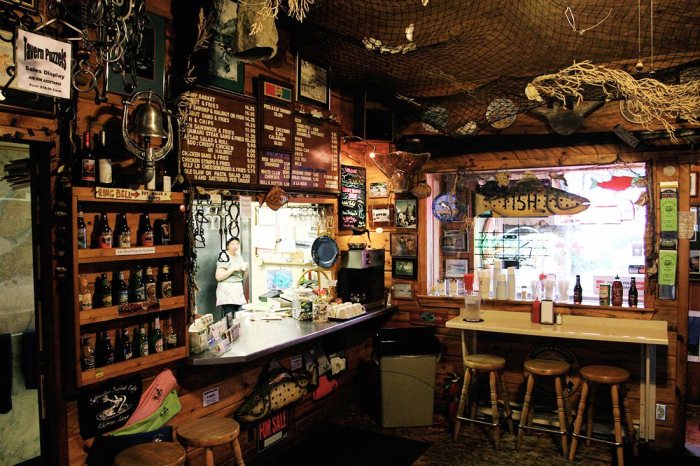 A local cafe can be visited at any time of the day in pajamas and slippers (Whittier, Alaska | Photo: topvoyager.com. 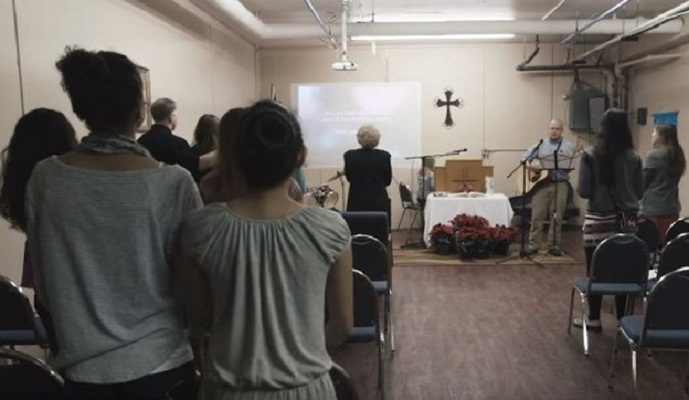 The commandant’s office now serves as the police station, post office, and mayor’s office, and the gyms have been converted into fitness centers and children’s play areas, while the church remains unchanged. 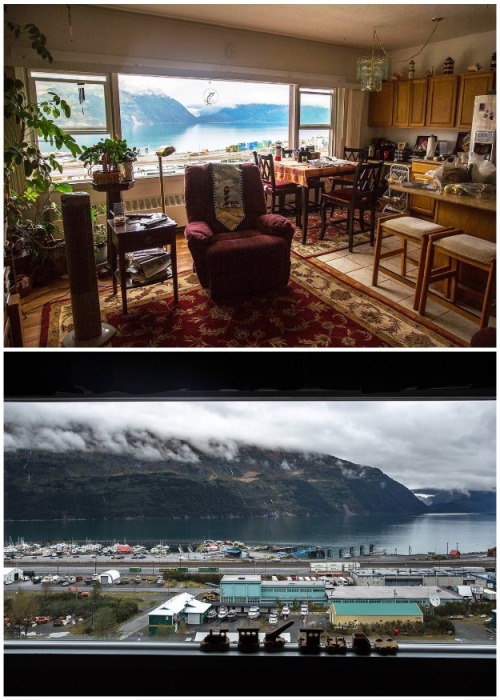 The view from the only house in the neighborhood is stunning (Whittier, Alaska)| Photo: dlyakota.ru.

Life in Whittier is still as hard as ever, because the town is covered with snow in winter, and in summer the constant rains don’t give peace, on top of that people don’t see the sun from November to February, and there is no work at all. But the townspeople are not complaining and are not going to leave their only home. 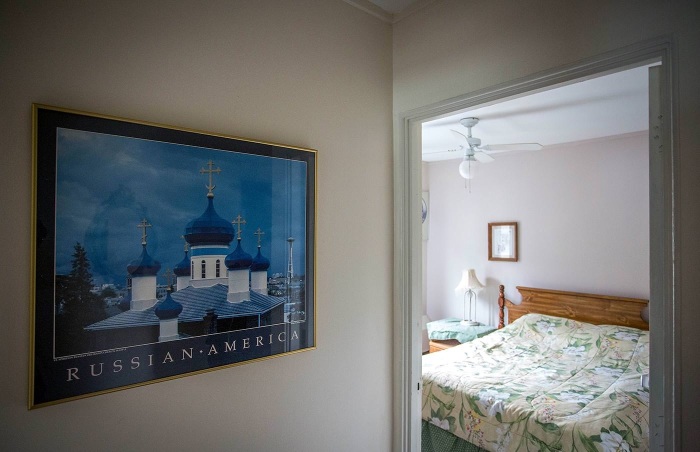 It turns out that the townspeople know the roots of their region! (Whittier, Alaska).| Photo: macos.livejournal.com.

And there were very enterprising residents who rent their apartments to tourists and conduct illegal tours of the house (prohibited by the rules of their cooperative), and very interesting in the territory of a strange city and picturesque surroundings, organizing even tours. 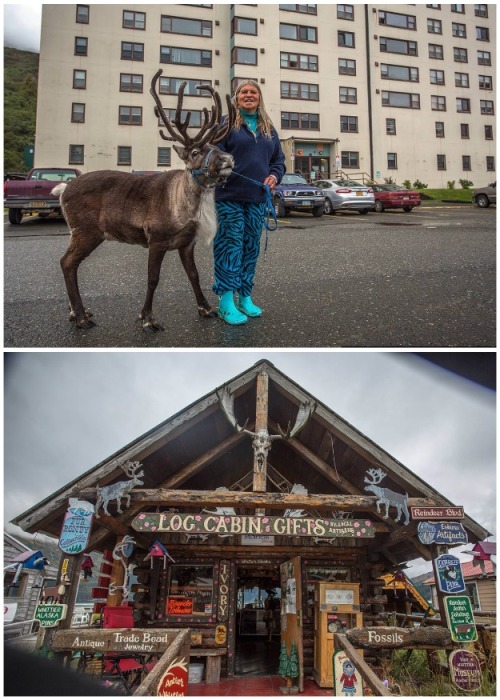 On the personal site of Jane, who turned several apartments into a mini-hotel, you can find not only breathtaking views of the suburbs and the program of excursions, but also a description of the hotel rooms, which have not just a suite, but also the presidential suite.

The eternal question of housing and the search for a place of residence with acceptable conditions of existence has always confronted mankind. In some countries, it has come to the point that people voluntarily began to settle underground, turning waste mines in a comfortable apartment with stable air temperature, given that on the surface to live is impossible.