Utrecht city guide in the Netherlands

Utrecht is a city in the Netherlands founded in the middle of the first century. It served as a defensive point on the border of the Roman Empire. The Roman Emperor Claudius commissioned his general Corbulonus to build a line of forts along the Rhine in A.D. 47. One of these forts or “castles” was the source of the later city of Utrecht. It was built at a ford across the Rhine and hence was called Traiectum, which means “crossing. In the local language it became Trecht, Uut-trecht (= lower crossing) and finally Utrecht. A little later, Germanic tribes settled here, whose descendants still live in what is now the Netherlands. 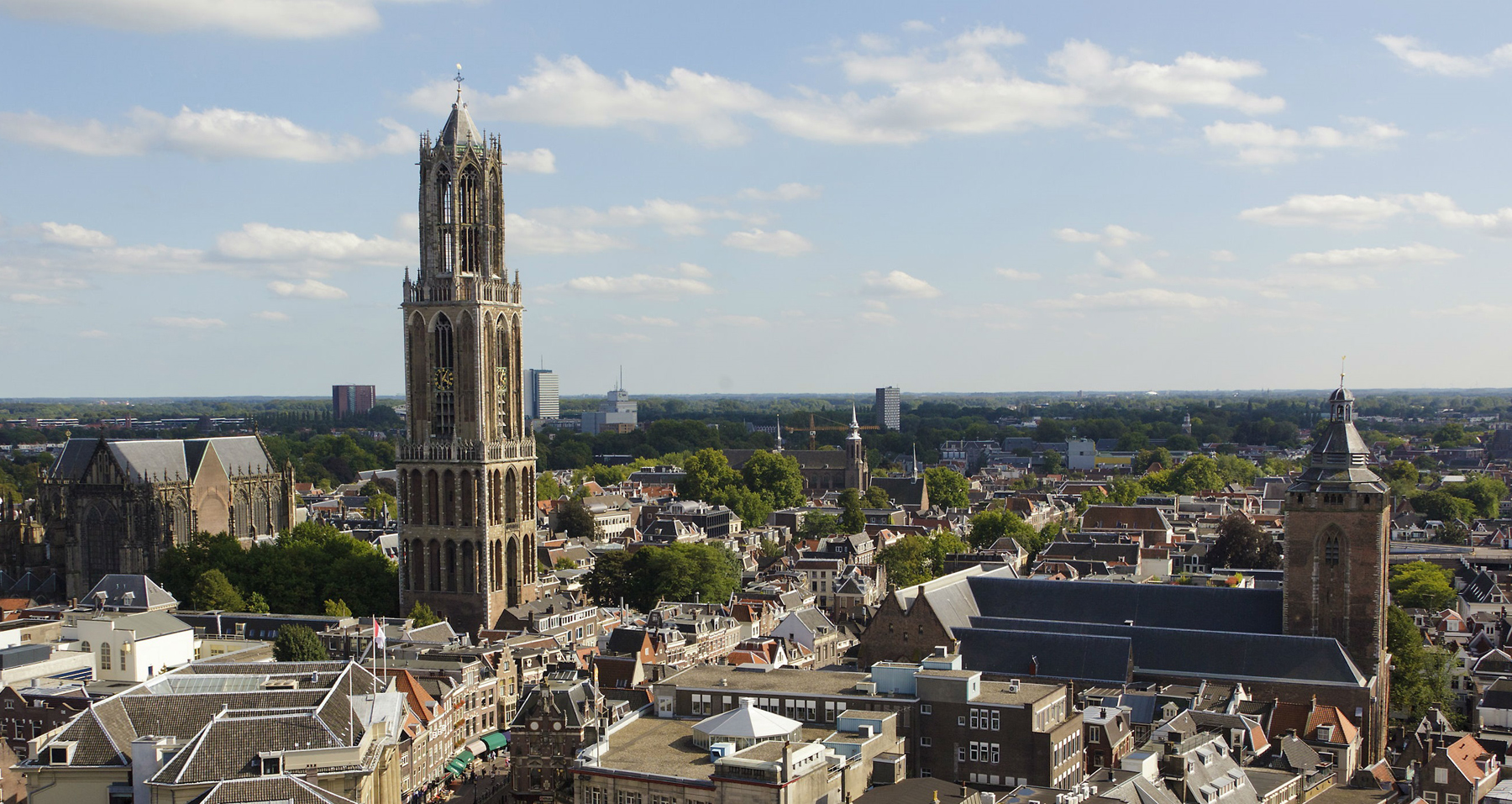 Utrecht is located in the central part of the country. Its area is 99.2 km² and the number of inhabitants is 359 thousand people. Today Utrecht is a key railroad hub in the Netherlands, and its main attractions include historic buildings, museums and gardens.

A historical fact! In 1579 Utrecht was the site of the signing of the Treaty of Utrecht, which united the Dutch provinces into a single state.

The modern Utrecht is a youth city with a large number of students, because only Utrecht University has more than 33 thousand students, while a total of 6 universities in the city. As in some other settlements of the Netherlands in the city there are a lot of water channels, which are so loved by foreign tourists. There are music and film festivals, exhibitions and fairs, as well as other festive and fun events like the Elf Festival.

What to see in Utrecht? What are the best places to see and things to do in one of the Netherlands’ biggest cities? Answers to all of your questions are in this article.

Utrecht is a very colorful and diverse city. There are almost 20 museums and 12 parks, sail boats and visit ancient castles. For a short stay in the city, we’ve chosen 8 sights to see in a day.

Utrecht is divided up and down by water straits, connecting the city with the capital and other provinces of the Netherlands. Unlike Amsterdam, the canals in Utrecht are two-tiered – they are deepened into the ground and as if dividing the city into two parts, one of which is on the waterfront, and the second – on the level above, on the streets we are used to. 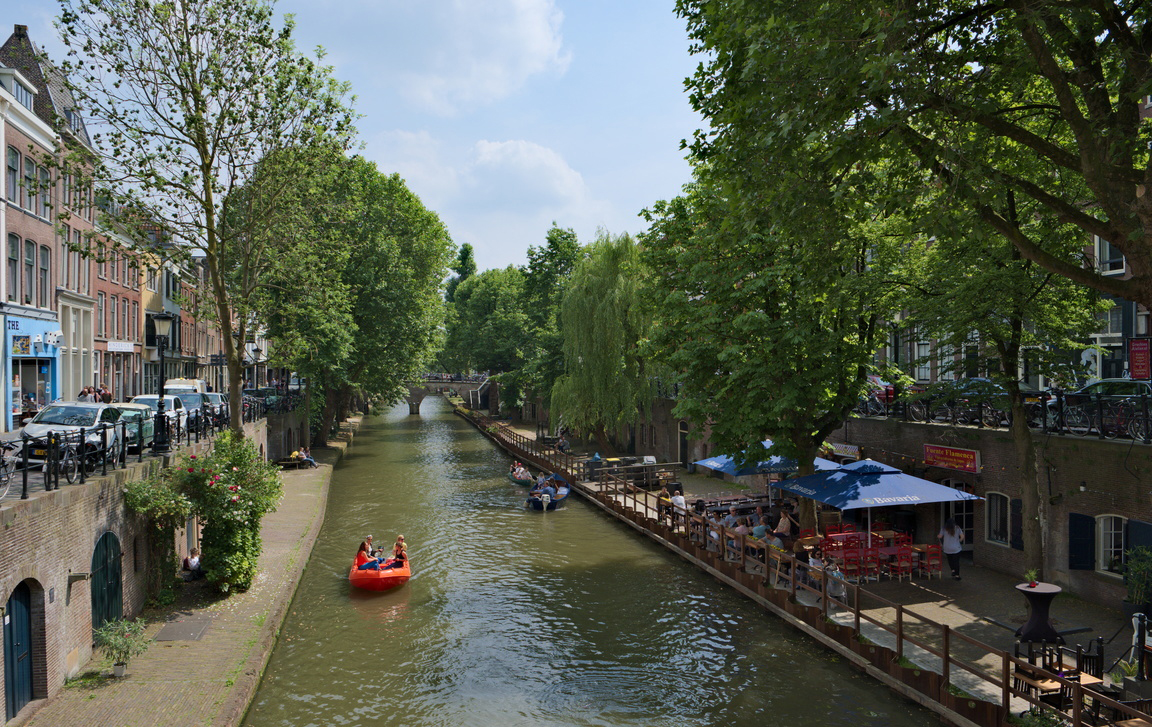 Many tourists, arriving in the city, immediately go on a circular cruise, others – enjoy walking along the waterfront and relaxing in seaside cafes. For those who wish to manage their own movements and experience the beauty of water adventures at the same time, there are rental areas for catamarans, boats and canoes throughout the city.

In 1924 there was no time machine, but the Schroeder House already existed. Unique from the point of view of that era, the building can still be deservedly called the most unusual house of all time today. 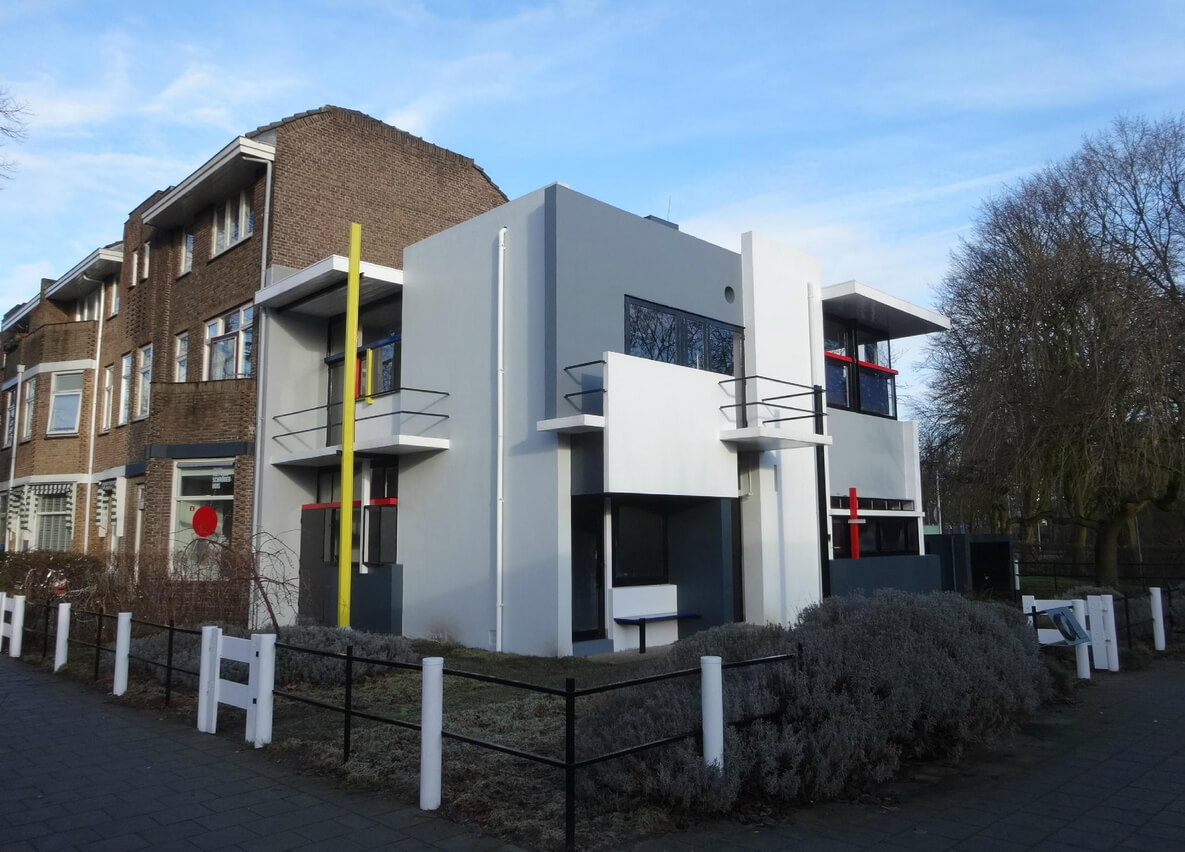 A recently widowed mother of three, she wanted a home that fit her and her unconventional ideas of what a home should be. Schroeder was instrumental in the design process. She knew exactly what she wanted: simplicity and space that liberated rather than constrained her. 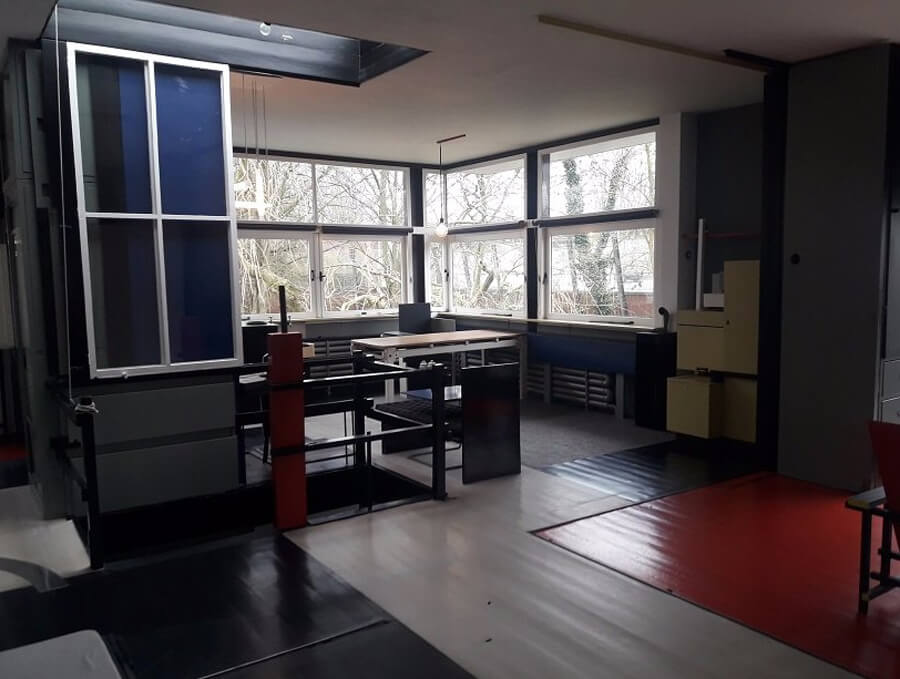 Mr. Schroeder turned out to be one of the few people who could satisfy the strange wishes of his wife. At her request, the Dutch designer and architect managed to create a house without walls, which later became a museum and a UNESCO World Heritage Site. All the furniture designed by Gerrit Rietveld folds up compactly after use, the doors of the rooms open with levers and mechanical buttons, and an elevator runs between the first and second floors to serve food.

Important: you can enter the House only with a ticket purchased in advance on the website of the Central Museum of Utrecht – centraalmuseum.nl. Please note that the entrance to the attraction is open every hour for visits by no more than 12 tourists.

The oldest botanical gardens in the Netherlands were opened in 1639. Originally on this site was an apothecary campus for students and teachers at the University of Utrecht, but in the 18th century the garden has become not just a scientific corner, but also a great place for recreation. 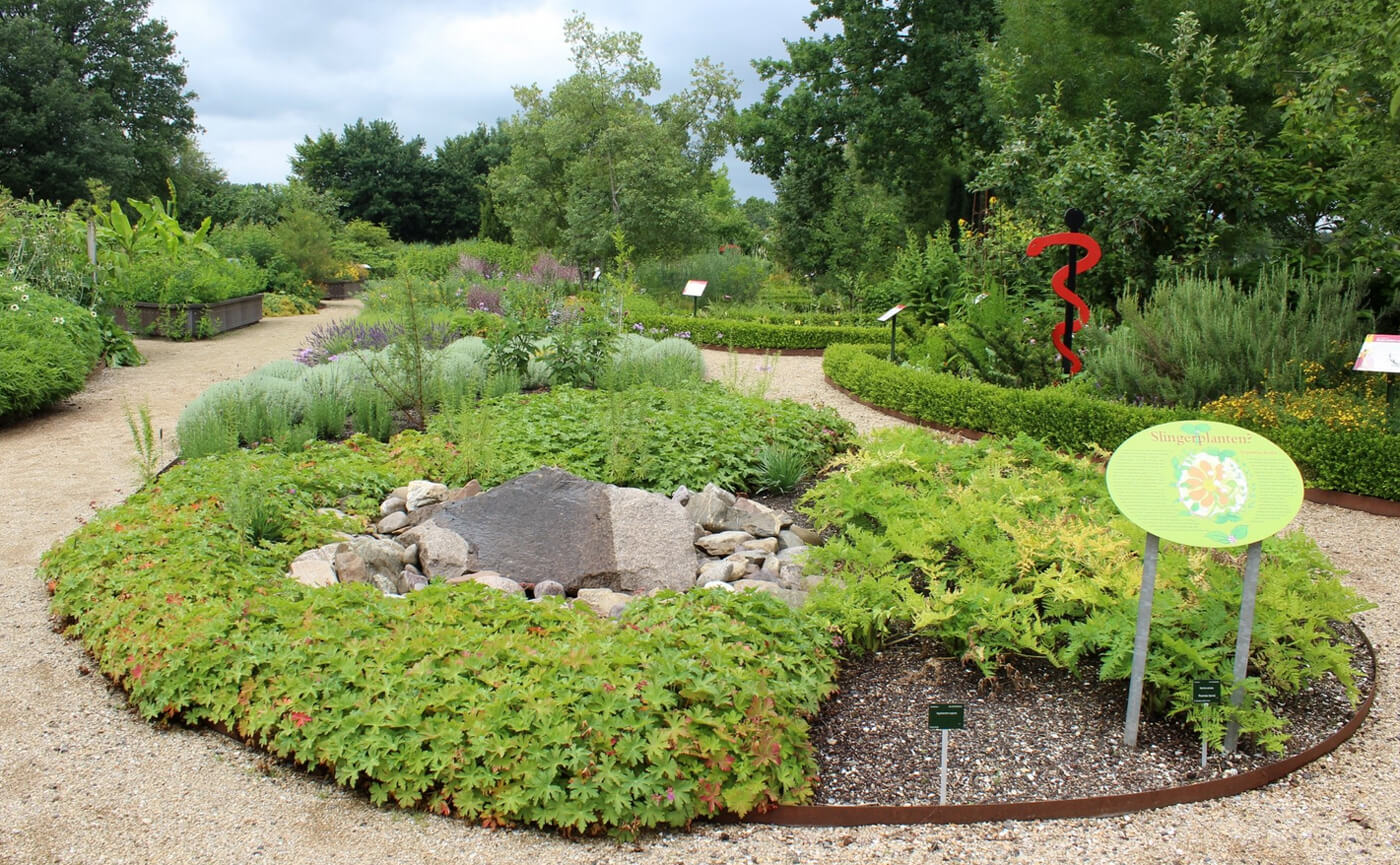 Over the nearly 400 years of its existence the Botanical Gardens have changed and expanded many times to eventually become home to nearly 18,000 plants of more than 10,000 species. Today you can see unique specimens from all over the world, many of which are kept in specially equipped greenhouses.

Interesting to know! A special computer program has been developed to keep track of the number and species of plants in the Botanical Gardens.

In addition to collections with unique flora, there is a large thematic garden, opened in 1995. This is a favorite place of the little travelers, because here they can visually learn the peculiarities of plant life and get to know them better thanks to the innovative equipment. 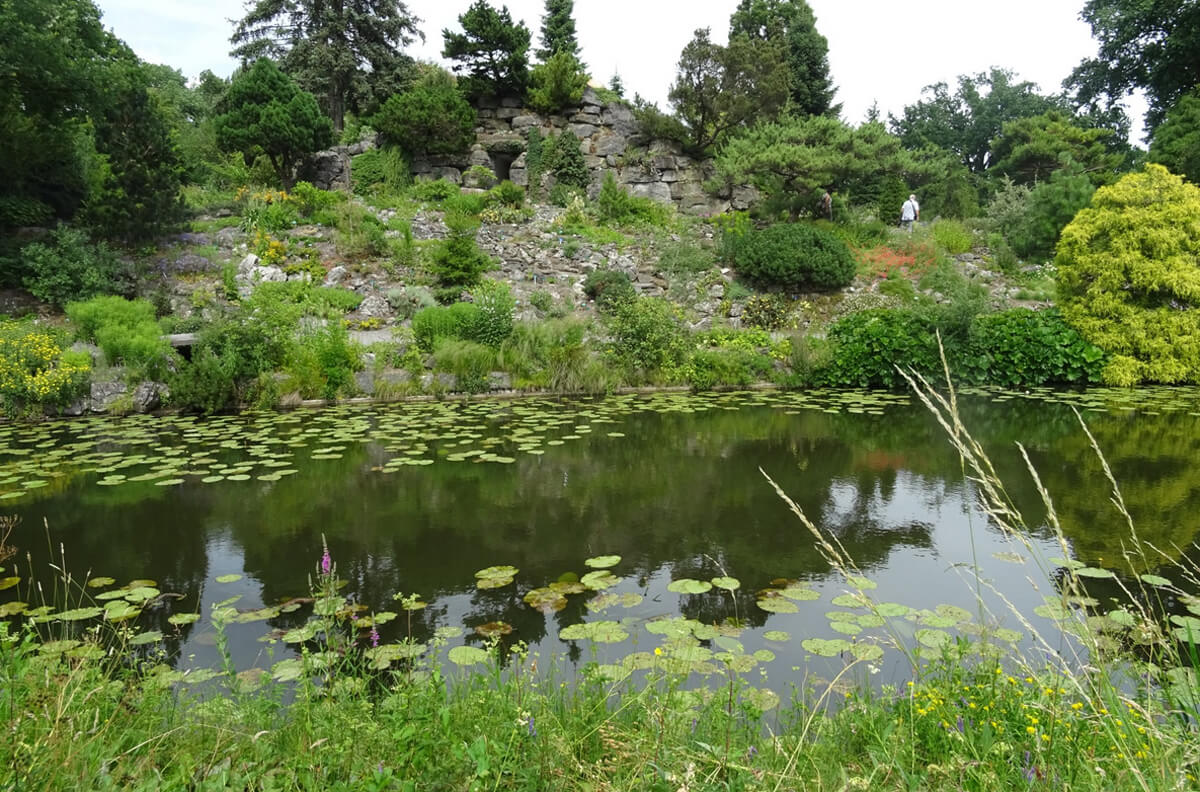 There are many benches, a pond and a cafe in the gardens. It is better to visit this attraction in the morning to have time to admire its beauty before closing time.

The Dome Cathedral, built in the 13th century, is the main religious landmark of Utrecht. Construction of the Gothic St. Martin’s Cathedral was officially begun in 1254, but actually began in 1284 and was completed in 1520. When a tornado struck the city of Utrecht in 1674, the nave of the cathedral collapsed. It was not until 1826 that the last debris was cleared away. At the time, the option of demolishing the entire church was even considered.

In 1811, Emperor Napoleon abolished the capitulars and separated the tower from the church by right of ownership: the tower was given to the civil authorities, the church remained in the possession of the church congregation. During the 19th and 20th centuries, the church and tower were restored several times. 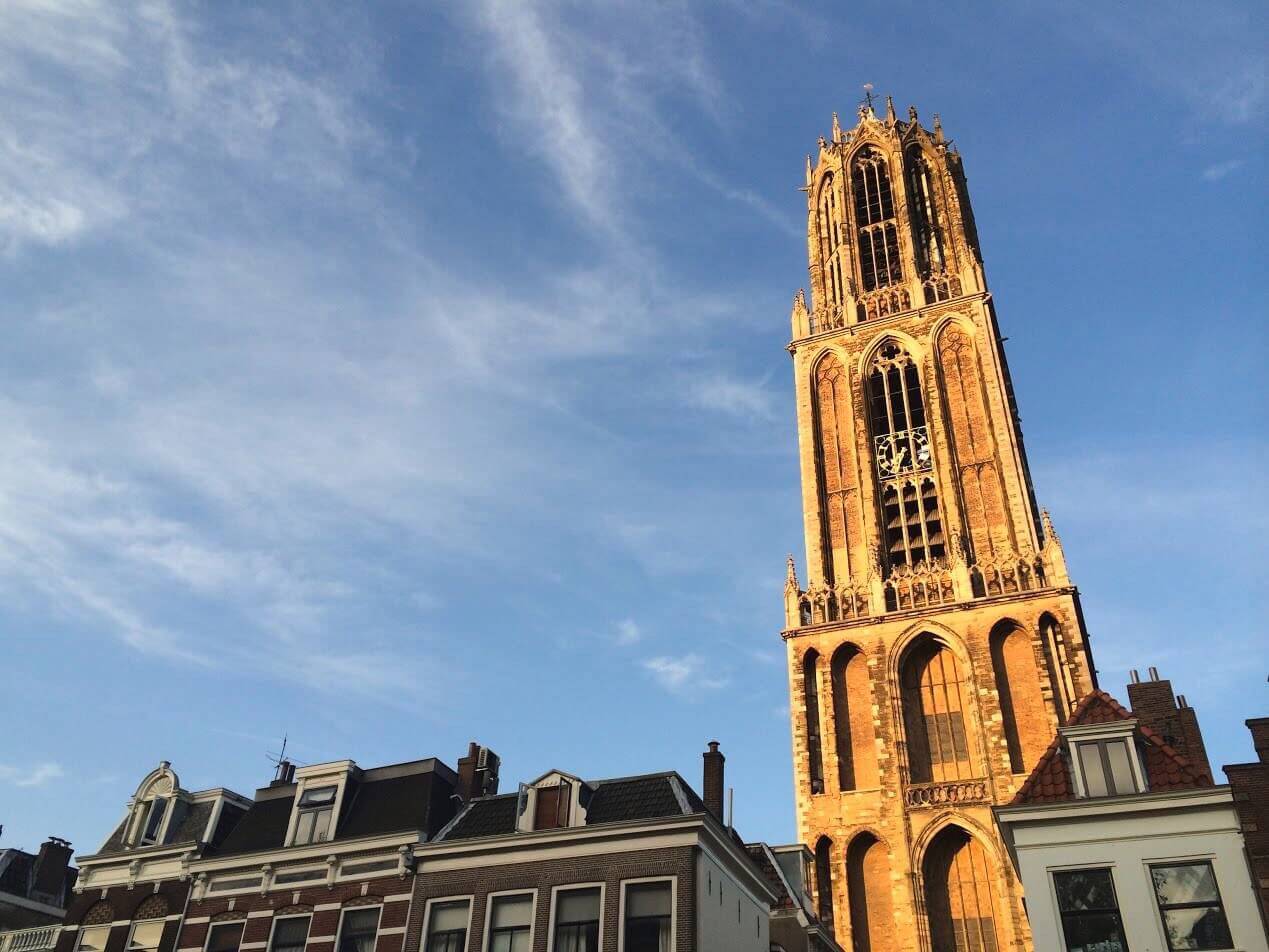 Although it is one of the most beautiful Gothic churches in the Netherlands, it is not this that attracts tourists, but the huge tower, 112 meters high, which offers a panoramic view of the city.

It takes a lot of strength and courage to climb the observation deck. For the most part, the 495 steps and the long climb up the dark spiral staircases do not scare travelers, but some prefer to admire the surrounding beauty from benches or at café tables located in the “bishops’ garden,” the cathedral’s courtyard.

Please note! Climbing to the observation deck of the tower is carried out in groups every hour. If you want to take beautiful pictures of Utrecht and not its tourists, go here an hour or two after opening.

Built in 1838, the museum has evolved from a small collection of ancient paintings into a huge complex on five floors of several interconnected buildings. It has everything you need to know about Utrecht, a modern city with a very rich cultural heritage. This attraction, in fact, consists of several, smaller ones:

Also note! Read about Madame Tussauds in Amsterdam in this article with photos.

Going to this attraction, have patience and do not take all your money with you. At this flower market, even those who are not very fond of these beautiful representatives of the plant world lose their heads. Huge roses, beautiful tulips, sunflowers, asters and hundreds of hundreds of flowers in pots – all this wealth is sold here every Saturday morning for ridiculous prices. 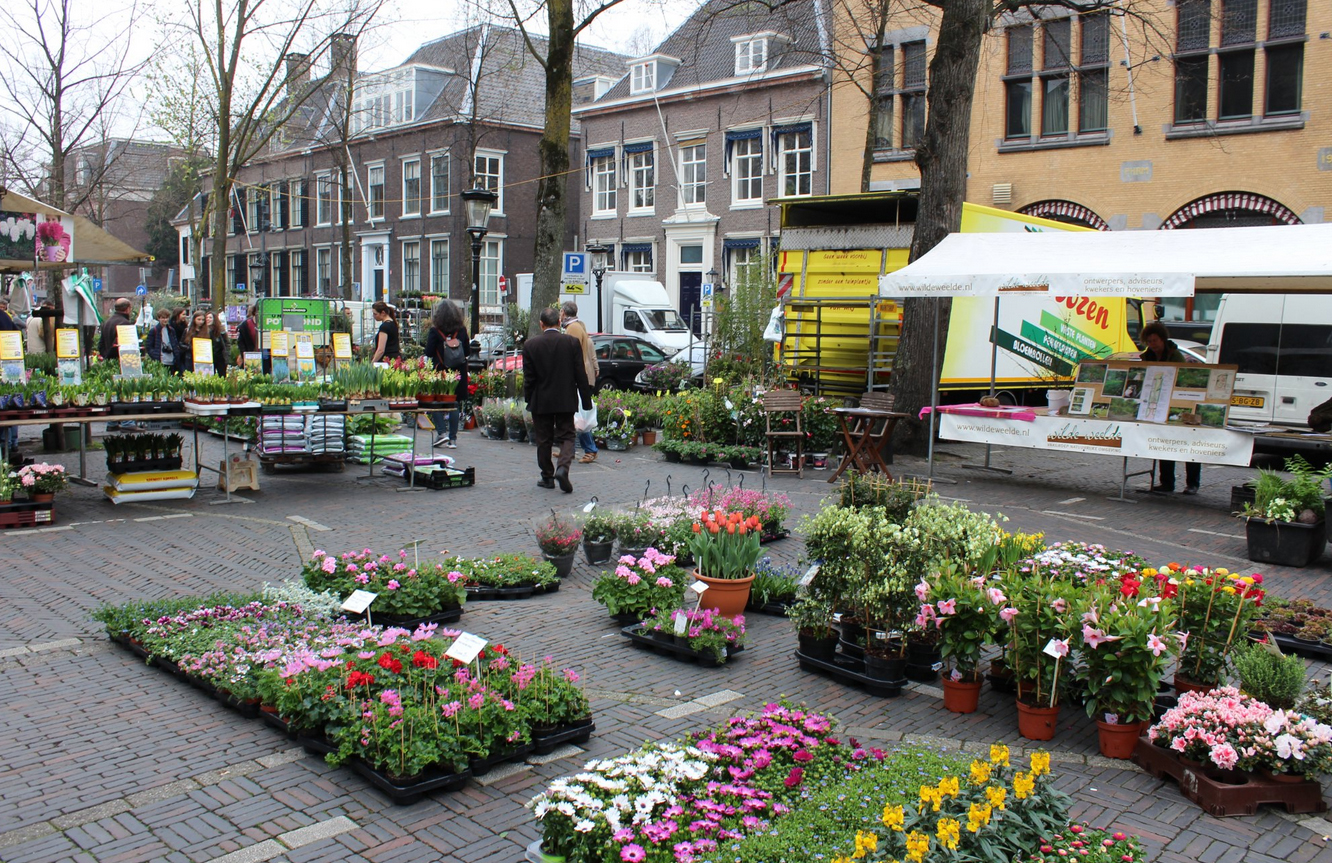 Price of bouquets at the market starts from 2 euros, and, for example, for 50 gorgeous fresh tulips you can pay only 6-8 €. Also on Bloemenmarkt sell lemon and orange trees, palm trees and many other plants. Indulge your soul with a portion of pleasant aromas and extraordinary beauty can be found on the square Janskerkhof.

Another museum, for which the city of Utrecht is famous, has the largest collection of jukeboxes in the Netherlands. Music boxes and clocks, organ, organ chimes and many other items will sound to you despite their venerable age. 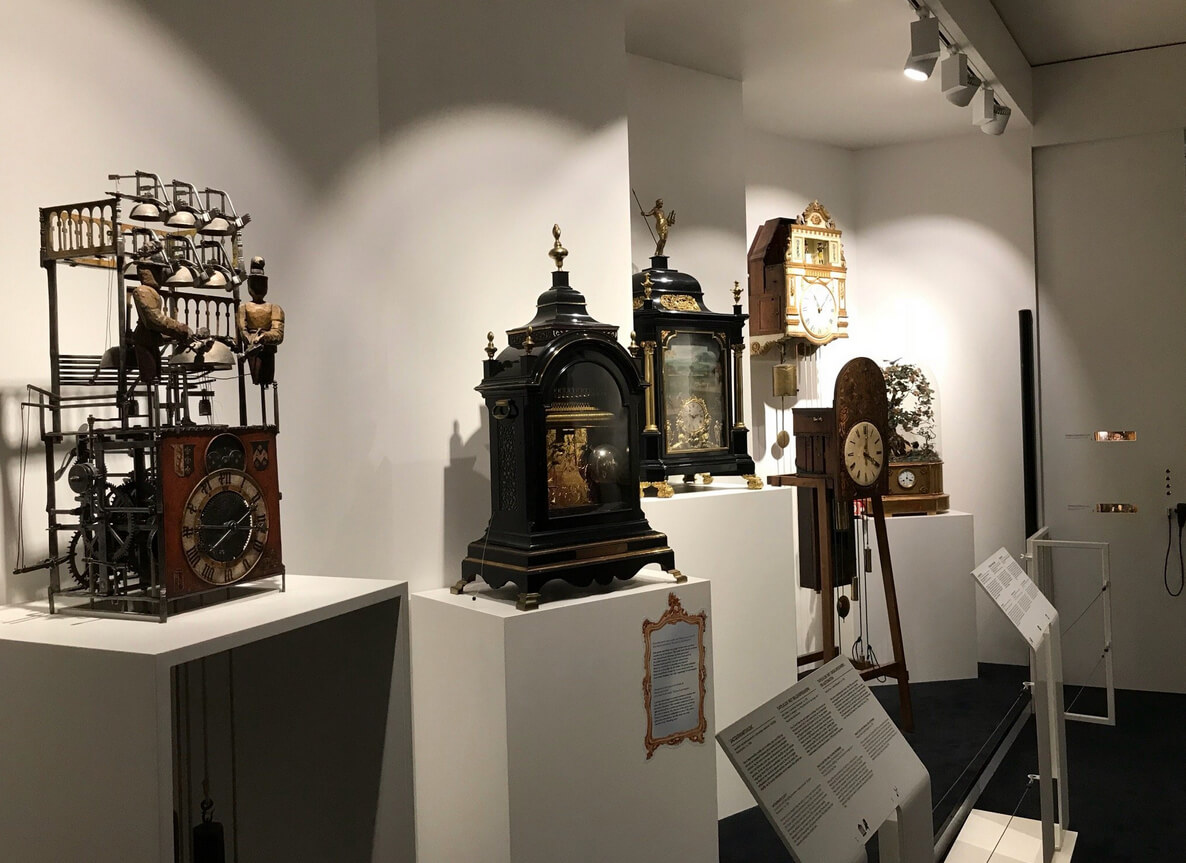 This interactive museum is very interesting for both adults and children. You can turn the magic mechanism yourself to hear its tune, or literally touch the art by scrolling the knob of one of the exhibits. Many travelers highly recommend taking a paid tour, as some instruments can only be turned on by a guide.

A gift! You can pay to enter the museum on the spot, but by ordering tickets online at the official site of the attraction, you can get an additional gift, such as a glass of lemonade from the cafeteria.

Another amazing attraction in Utrecht and the Netherlands is a railway museum. It is located on the site of the old Maliebaanstation station, which belonged to the line Utrecht-Amsterdam, but due to high competition was closed in 1921. In the early 2000s this place was completely reconstructed: most of the area was filled with cars and locomotives from different eras, and one platform was given to perform its natural role – here the train comes from the central station of the city. 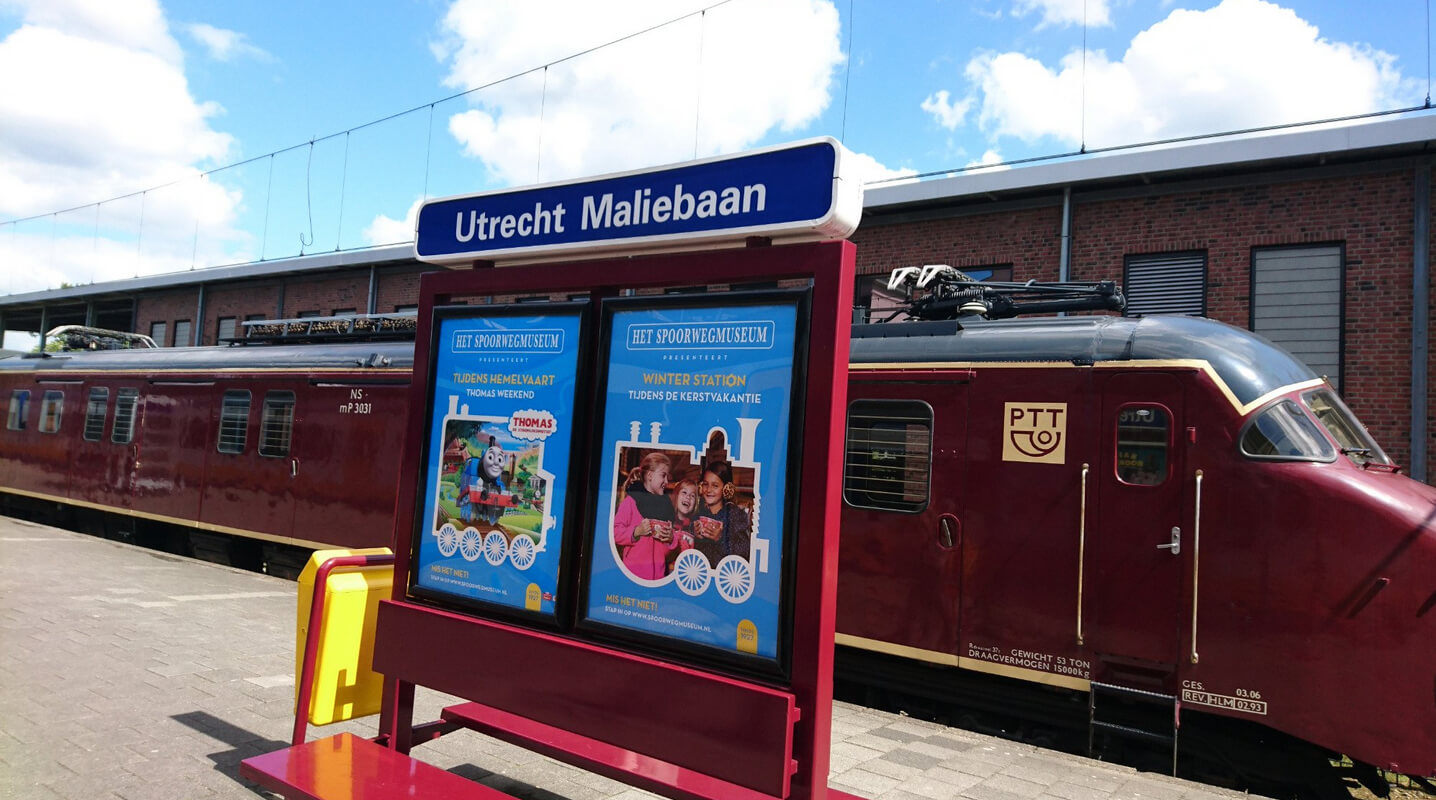 As travelers say, a visit to the railway museum can take half a day, especially if you are with children. Het Spoorwegmuseum is divided into two halves:

You’ll love it! The Het Spoorwegmuseum has many unique exhibits, one of them being Wilson, the hero of the famous Chuggington Steamers cartoon. 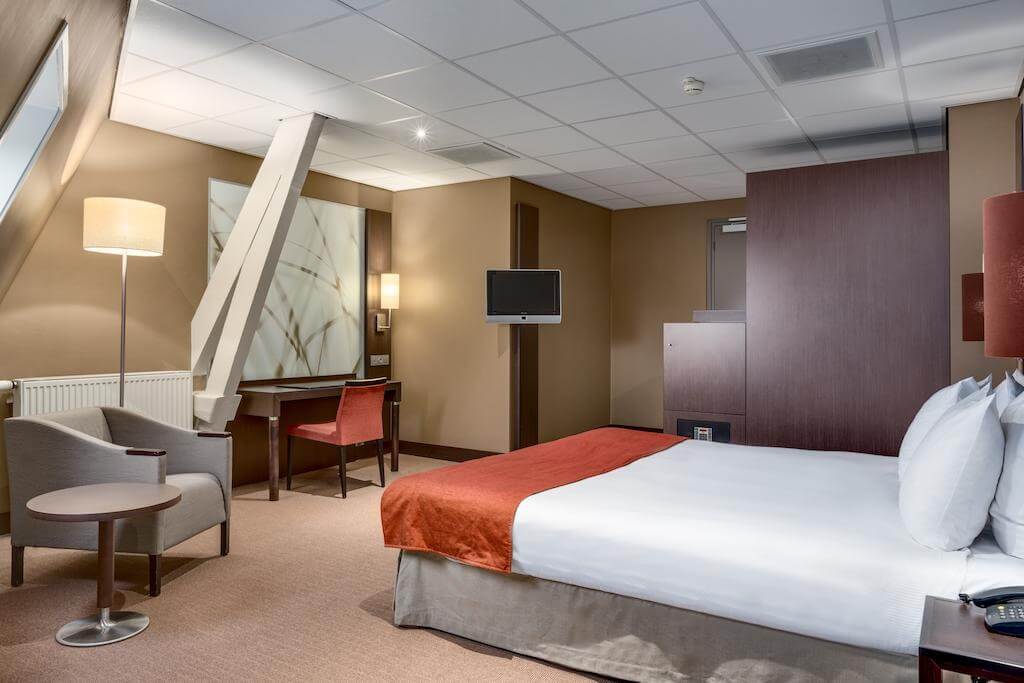 The price of accommodation in Utrecht does not stand out among other cities in the Netherlands. There are only a few dozen hotels in the city and the minimum nightly rate starts at 65 € for a private room in a hostel. A more comfortable stay in a three-star hotel will cost at least 85 € for two people, in a four-star – 100 €.

A more economical variant is apartments rented directly from Dutch people. A studio apartment with a kitchen and a bathroom will cost at least 50 € but travelers on a tight budget can also rent a room from a landlord for only 30-40 €. 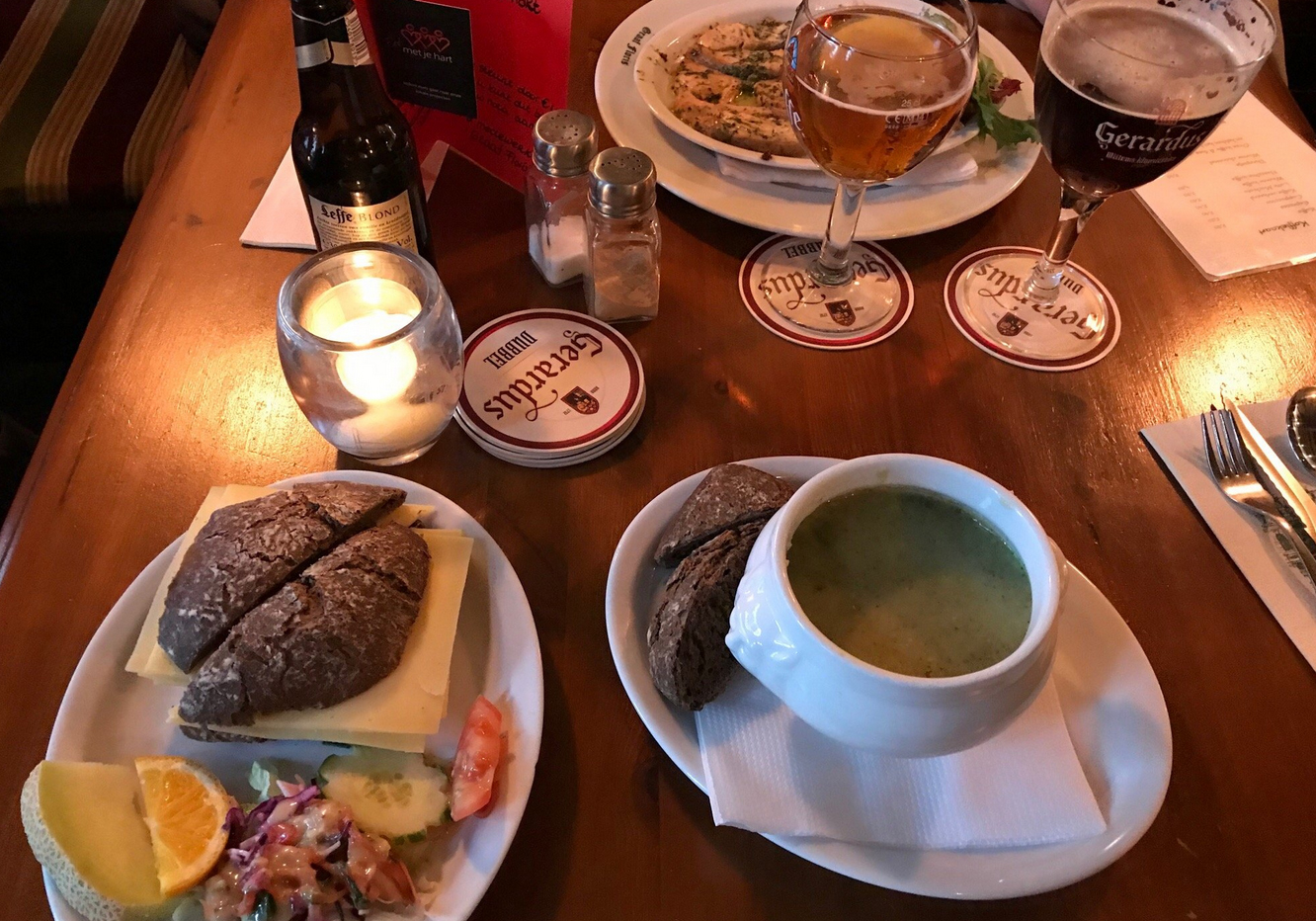 Utrecht has an abundance of eating establishments, most of them located around the most popular attractions, on the banks of canals and in the city center. Food prices in this region of the Netherlands are as follows:

Most establishments offer Italian, French and Mediterranean cuisine. Click here for a list of local specialties to try.

How to get to Utrecht

To get to the city directly by plane is not possible, as it does not have an airport, and most travelers have to fly to the Dutch capital, Amsterdam, and from there go to their destination. To overcome the distance of 53 miles between Utrecht and Amsterdam you can use the following modes of transport

Utrecht is a city in the Netherlands, which can be called one of the most unusual in the country. Visit it and see for yourself. Have a great trip!

Video: walk around the city, overview of Utrecht sights and useful information for travelers. Take a look at it for sure!

Updated: 15 Dec, 2018 Klagenfurt, Austria is an ancient city in Europe, the history…