One of the most famous and unique museums with priceless works of art attracts the attention of millions of tourists every year. The Uffizi Gallery, located in the historic center of Florence, holds works by famous masters. The basis of its collections was laid by the great dukes of Tuscany Medici, and their last representative in the direct line left all the values free of charge to the city with the condition – never to export them outside Florence. Anna Maria Luisa de’ Medici (1667-1743) had the foresight to keep centuries-old masterpieces within the boundaries of one palazzo for posterity. 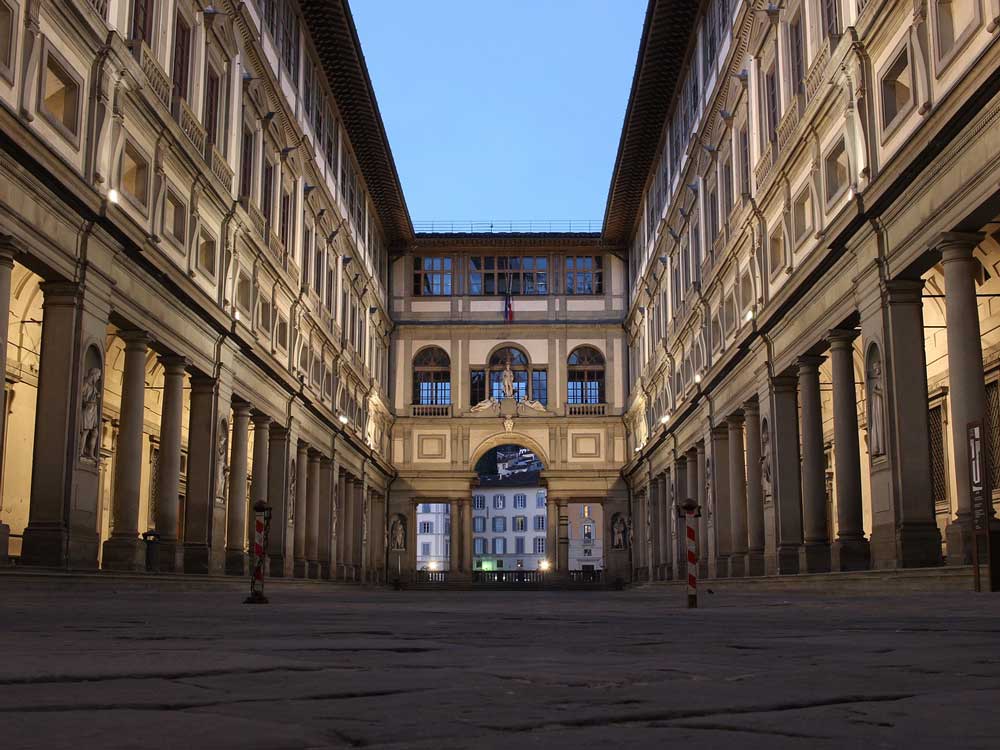 The building’s name suggests that it was originally built to house the city offices and institutions of the Duchy of Tuscany. The palazzo was commissioned by Cosimo I de’ Medici and built by his favorite, Giorgio Vasari. The work began in 1560 and was finished already after the death of the master. Bernardo Buontalenti, one of the three great Florentine architects, took over in 1574.

The Uffizi is shaped like a horseshoe, stretching from northeast to southwest and enclosed by a southern through loggia along the Arno promenade. The open part faces the Piazza della Signoria, the end of the eastern wing faces the via della Ninna and the western body is flanked by the Loggia Lanza. The long sides are about 150 meters long. 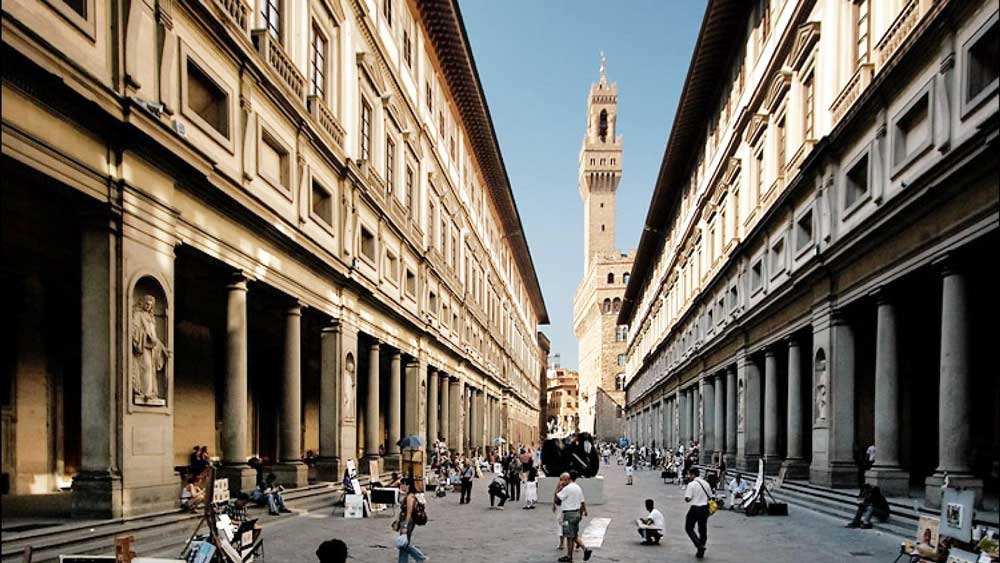 The lower part of the courtyard façade is an open loggia decorated with statues of the great Tuscan masters in niches. The installation of the sculptures was originally conceived, but the sculptures did not appear until the 19th century. The east wing has several entrances, including one for the general public and one for those who have reserved tickets in advance.

The building has three floors. On the first floor are the service rooms. A monumental Vasari staircase leads to the level above. The second floor is occupied by the exhibition halls. On the third level are the famous corridors, which have become the symbol of the Uffizi Gallery. 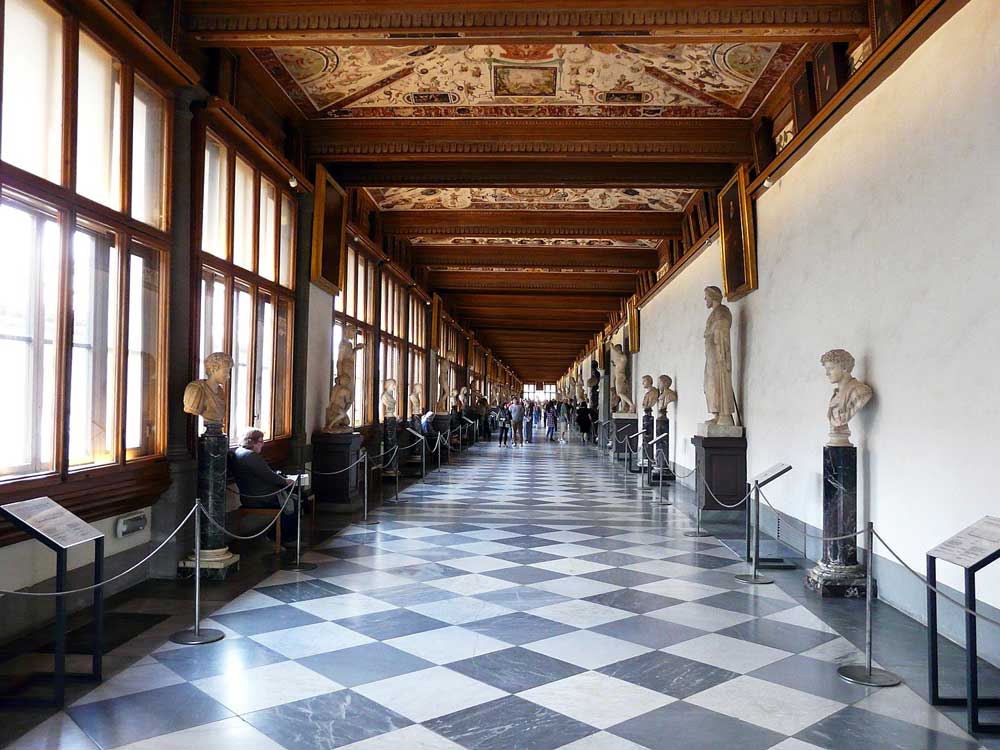 Their ceilings are decorated with grotesque paintings, there are statues, busts and sculptural compositions along the walls, the floors are tiled with marble in a chessboard pattern, and there are portraits on the walls. Doors from the corridors lead to the various exhibition rooms.

The itineraries and collections housed in the museum are systematic and orderly. This makes it possible to take a more meaningful approach to masterpieces of art and works of individual masters, as well as tracing significant historical events and life milestones of the Medici family. The basic principle behind the Francesco I Gallery has been restored from archival records and preserved.

Located on the ground floor, the Sala San Pierre-Squeraiggio is decorated with frescoes by Andrea del Castagno and Botticelli. You can only see them during exhibitions or ceremonies.

On the second floor there are separate rooms with works by Correggio, Raphael, Parmigiano and Titian. There are the Red and Blue halls with works by Italian and foreign masters who worked in the 16th century, the Yellow halls with masterpieces by Caravaggio and the Caravaggists, as well as rooms for temporary exhibitions. On the third floor are rooms of Sienese and Florentine paintings of the XIV century, separately with works by Michelangelo, Leonardo da Vinci, Montaigne, Bellini and Giorgione, Botticelli, Pollaio, Lippi, masters of the XIII century and Giotto. Interesting are the exhibitions of the rooms of the Mathematical Sciences, the Miniatures, the Geographic Maps, the rooms of the Hermaphrodite, the Niobea, the Hellenistic sculpture, etc. It is on the upper level that the main masterpieces that made the museum famous all over the world are collected. 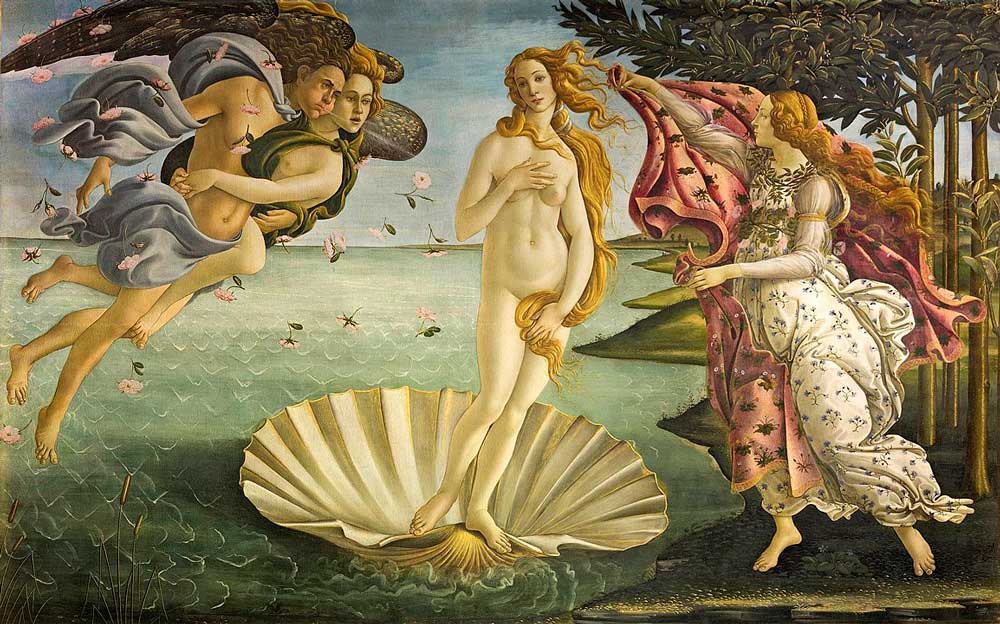 The Hall of the Tribune is the heart of the Gallery. It was designed by the theatrical architect Buontalenti soon after the transfer of the Medici collection to the Uffizi in 1584, and was intended to house the most valuable pieces. Semiprecious stones, mother-of-pearl shells and colorful marble were used in the decoration. The interior and the exhibits inside can only be seen through the doorways, as ordinary visitors are not allowed inside. 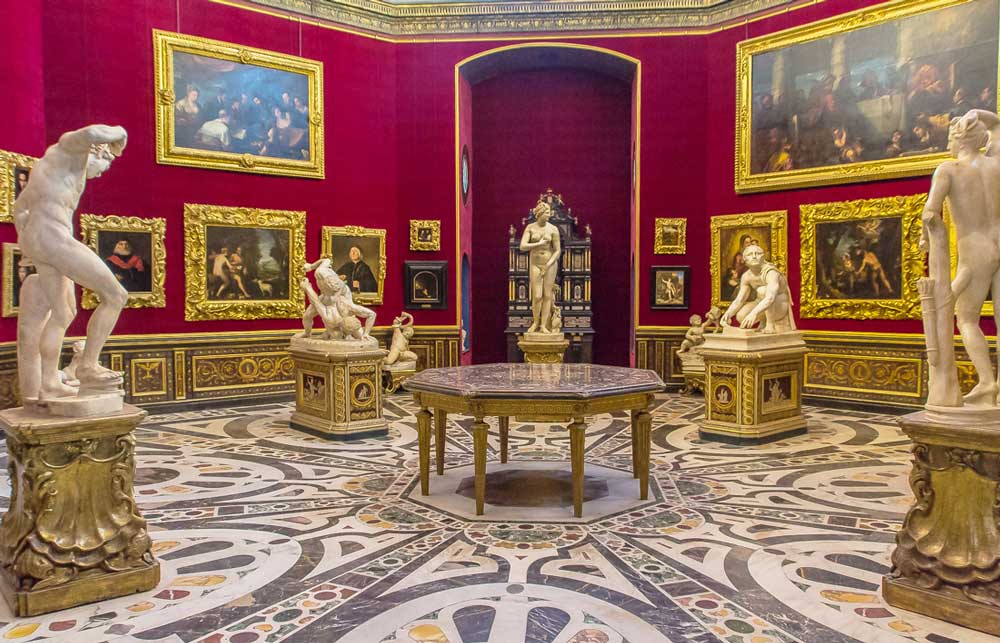 The Tribunal Room in the Uffizi Gallery

The Drawing and Engraving Room occupies the room of the former Medici theater, created by Buontalenti in 1586 and remodeled in 1952-60. In addition to the permanent exhibition, there is a study room with workstations for the research work.

The collections of the Uffizi Gallery contain absolute masterpieces of world-class art from the Middle Ages and the Renaissance, partly to the present day. There are works by Giotto and Michelangelo, Botticelli and Raphael, Piero della Francesca and Correggio, Filippo Lippi and Leonardo da Vinci, Titian and many others. The collections are divided according to the main areas. They contain thousands of artistic paintings, tapestries, antique sculptures, which are more than 4 centuries old.

The founding of the Uffizi Gallery is connected with Duke Francesco I de’ Medici of Tuscany, son of Cosimo I. It was on his orders that in 1581 the most valuable works from the family collection ended up on the top floor of the building, in the rooms of the palazzo that had been converted to exhibition spaces. It was possible to get in through special entrances exclusively by private invitation. The Gallery was only opened to the public almost two centuries later, in 1769.

Paintings and sculptures in the Uffizi Gallery

The most famous paintings in the Uffizi Gallery are Botticelli’s “Spring” and “Birth of Venus”, Leonardo da Vinci’s “Annunciation” and “Adoration of the Magi”, the portraits of Cosimo I and Eleonora Toledo by Bronzino and the profile diptych of the Dukes of Urbino, Federico da Montefeltro and Battista Sforza by Piero della Francesca.

NOTE: A unique Google Art project allows you to virtually visit the Uffizi Gallery and walk around some of its rooms.

The gallery also features numerous sculptural groups of medieval sculptors, such as The Wrestlers, Cupid and Psyche, Nymph and Panther, Hercules and Ketravr, The Beast, Hercules of Farnese, Laocoon, etc. The statues of Arianna, Venus, Empress Helena, Spinario and San Lorenzo (Bernini), busts of emperors, Roman gods and sarcophagi with elaborate bas-reliefs are of interest.

The cost of a standard ticket to the Uffizi Gallery varies depending on the season. The high season begins on March 1 and ends on October 31. During that period the cost of a standard ticket is 20€. Low season lasts from November 1 to February 28, the cost of a ticket during this period is 12 €. Free tickets for 2 € are available to citizens of the European Union, Norway, Iceland, Switzerland and Liechtenstein aged between 18 and 25 years who have the appropriate documents.

Free entrance to the Uffizi Gallery for people under 18 and disabled people. The price of the audio guide in Russian – €6.

Details on the cost of tickets to the Uffizi Gallery, as well as the reasons why it is better to buy them in advance online, unitalia.ru has described in detail in this article. Here you will also find information on how to enter the museum for free.

Rules and tips for visiting

In the lobby there is a free checkroom, where you have to put all the items that are forbidden by the rules – large bags, large backpacks, umbrellas. It is not allowed to take water and drinks with you. You can quench your thirst and eat in the cafeteria on the terrace (3rd floor) above the Loggia Lanzi. The views of Palazzo Vecchio and Piazza Signoria are spectacular, so it’s worth a visit.

The information desk is on the Piazza della Signoria side. The Uffizi building has elevators, toilets on each floor, and an ATM at the entrance. There is a mother and baby room on the second level, and there are changing tables in the first-floor restrooms and mezzanine.

On the first floor there are stores that sell guides, themed books, postcards, reproductions and souvenirs. It is important to know that they do not have a separate entrance, so you should buy before leaving the Gallery. Don’t pass up the chance to send a postcard or a small gift to your loved ones or yourself straight away from the local post office. It will be a pleasure to receive it afterwards straight from the Uffizi!

You can enter the Uffizi Gallery from Piazza della Signoria or from the side of the River Arno embankment. The nearest bus stops are “Condotta” – number C2 and “Galleria Degli Uffizi” – number C1. For convenience, we suggest using the diagrams of urban transport of Florence and specific routes.

Hop-on hop-off buses for 24, 48 or 72 hours in Florence are one of the most popular attractions in the city. 2 fascinating routes, audio guide in Russian and free Wi-Fi on board!