The Mazovia Landscape Park has one of the many advantages. You do not need to leave Warsaw to find yourself in it. Its northern border is marked by the King Jan Sobieski Nature Reserve. Just take city bus number 525, which will take us to the reserve and thus to the Mazowieckie Landscape Park. This park was created to protect the forests and the most valuable natural areas on the right side of the Vistula. 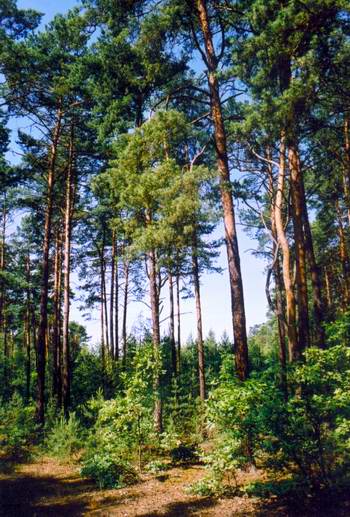 It covers the districts of Warsaw: Wawer and Wesola, and the communes: Józefów, Otwock, Wizowna, Karczew, Celestynów, Kolbel, Osiec, Sobierze Jerzyora and Pilawa. Its range covers almost 16,000 hectares of forests and meadows. On maps from the late 18th century, these areas belonged to a large forest complex called the Osiec Forest. The forest has had a tremendous impact on what is most valuable in the area today. Most of the natural monuments are old trees that remember the times of the forest. The oldest traces of Slav presence in this area date back to the 6th-7th century near Kissing, although traces of settlement are even older. And here appears an unusual name, which is intertwined in different contexts in almost all studies of the Mazowieckie Landscape Park.

Kissing is a village adjacent to the most valuable meadow complex called Bagno Kissing. Where did this name come from? Perhaps it was influenced by an unusual plant, the silver common fern. This little plant, a magical plant, was supposed to lure suitors to the girl.

The swamp kisser is also a bird’s paradise. Those who don’t have trouble getting up at dawn can make many unusual bird sightings. There you might also find a moose swimming in the fog. Elk may also meet us in other parts of the park. Most of the preserves established within the park are reserves protecting peatlands, and it is easiest to encounter this mysterious animal there. Peat bogs, bogs, probably hide many secrets, which is why they are so often found in legends and fairy tales. The very smell of the bog, as well as the protected plant with the same name “bog” brings an unusual mood, and if you add to it the clang of a crane, croaking frogs or the sight of a small plant – dewdrop, devouring flies, impressions of the trip will remain for a long time.

The most interesting peat bogs, hidden in the forest thickets, are quite easily accessible. You should only remember that within the reserve you should only move along the trails and paths marked out for tourists. While wandering through the Mazowieckie Landscape Park, don’t forget to look up at the sky from time to time. Who knows, maybe you will be able to see a stork, which is not like every decent stork? The black stork, an extremely rare bird in Poland, has found enough peaceful places to nest here. His image appears in the park logo.

Another unusual bird of shimmering colors, the kingfisher, loved the banks of the wider river. Residents of Warsaw have long been drawn to the Evider. It was here that the first nudist beaches appeared. Not surprisingly, because the wider meanders create charming corners with natural vegetation, and it is a shallow, safe river, although it lacks real depths. You can encounter its beaver and its wildlife, thanks to the protection of the reserve, puts it among the most beautiful rivers in Mazovia.

It is very close to the Evider to the next reserve, which is the forest lake “Peat”. For the residents of Otvock and Karczew it is a walking place, next to which, in a wooden, century-old building, is the museum-educational center “Base Peat” Mazowieckie Landscape Park Complex. The tiny museum is full of interesting exhibits. There you can see what a sod looks like, a gray heron, how big a white-tailed eagle is, and how a crow differs from a rook. The ethnographic part of the exhibit showcases the culture of the Kolbel region.

Otvock, which was created as a summer resort, deserves a separate trip, and thanks to the surrounding pine forests – a health resort. It was designed by Michal Elviro Andriolli, who introduced a characteristic type of decorative wooden architecture to the Nadvider River landscape, called “Sviedermayer” half a century later by another artist, the poet Konstantin Ildefon Galczynski. Today you can still admire the unusual wooden houses.

READ
What to see in Kusadasi, Turkey?

However, the Baroque church with paintings by M.E. Andriolli should be noted in Karczew.

When planning a trip you should also consider the history of the last world war and visit Celestin, described in the book “Stones for the Lair” and known for the battles of scouts with the occupiers.

Mazowieckie Landscape Park is connected with hiking trails and bike paths to Warsaw. The most convenient connection is the historic section of the Vistula Railroad. 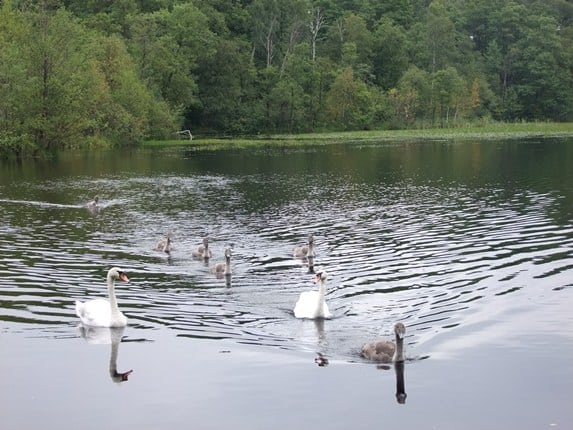 Educational Center “Baza Torfei” in Karczew is located near the reserve “Na Torfa” in the Mazowieckie Landscape Park. Czeslaw Laszek and is located in a building over 100 years old forester’s lodge. Educational activities at the “Base Torfei” has been carried out since 1995.

The creation of the center aimed to increase the role and function of the Mazowiecki Landscape Park in the protection and formation of the natural environment, allowing teachers to conduct environmental education in the park, present the natural, cultural, historical and landscape values of the IPC and actively involve children and young people in environmental programs. For this purpose, in the building of the Torah base was organized an exhibition with an interesting natural exposition, which described the main types of habitats and species of fauna found in the Mazowieckie Landscape Park. Czeslaw Laszek.

The activities offered prepare children and young people to skillfully and actively observe nature and study its regional natural and ecological values. The second part of the exhibition, on the other hand, presents ethnographic and cultural souvenirs from the Kolbe region and archaeological objects, which aim is to introduce visitors to cultures and show traditional tools related to everyday life and work of the inhabitants of our region.

READ
The 10 most beautiful castles in Austria

A big attraction at the base is an aviary with a live gray wolf named Zew, brought here in 2005 from a private zoo in Kajidlov. Outside there are also types of birdhouses for different species of birds, educational boards and an interesting building that is the foundation for the bats.

A wooden training shelter was opened in 2009 to allow more people to take classes. 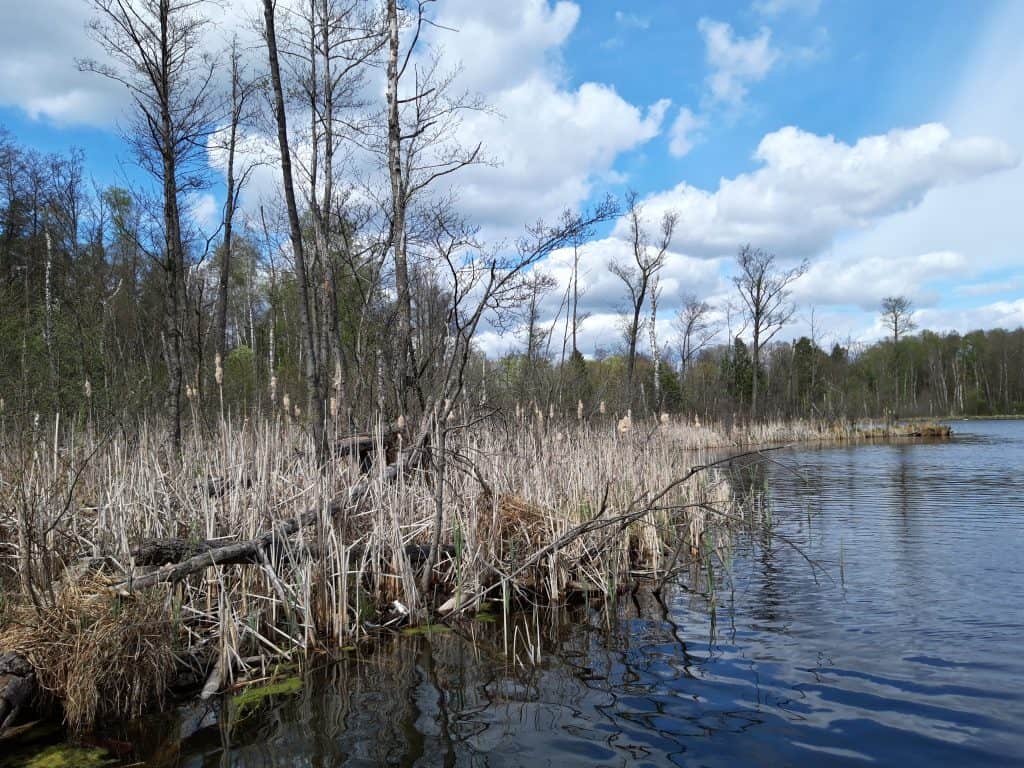 The village was founded at the turn of the 18th and 19th centuries as a rented village in the old town of Osiecki, located outside the city, it consists of several colonies on the hills and depressions on the ground, that is, after the “dens” – hence the name of the village.

Next to the Metraki colony is the so-called “Czarci Dół”, a collection of boulders that are probably the footprint of a cemetery of shadow graves. The surrounding population associates this place with many interesting stories of mysterious events, devils possessing people’s souls. Ponurzyca is one of the most picturesque villages in Masovia, replete with numerous views – beautiful views of Mount Calvary and Czersk.

Całowanie bog is one of the largest peat bogs in Masovia, located in the southwestern part of the Masovian Landscape Park. This place has been known to naturalists for many years as a refuge for endangered animal species and a habitat for valuable flora. Progressive dehydration, abandonment of mowing, peat extraction and growing ideas for commercial development of the peatland area may soon lead to the destruction of these values. 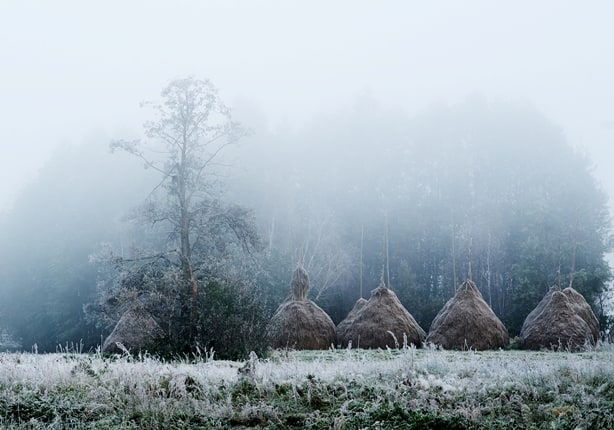 The peat bog is a national refuge for birds (according to the classification of the Polish Society for the Protection of Birds). The most interesting are the breeding seedlings of birds: the Eurasian Curlew (Numenius arquata) – 7-8 pairs, the Howler (Limosa limosa), the Red-blooded Thrush (Tringa totanus) and the Snipe (Gallinago gallinago). Swamp meadowlark (Circus pygargus) and common corncracker (Crex crex), a globally endangered species, are also found on sedges.

READ
Vulcano, Italy: where is it, when to go and what to see

In addition to the natural values, the area of the Kissing bog has also archaeological significance – on one of the dunes were found numerous traces of deer hunters from the glacial period.