We have compiled a list of the most important sights in Phuket . Your only task is to plan your vacation and decide in what order you want to visit the places we recommend.

Picture this: a mountainous island with lush rainforests, limestone cliffs and some of the quietest and most beautiful beaches. Sounds like paradise, but such a place exists on Earth and is within reach, you just need to go on vacation to the Thai island of Phuket. 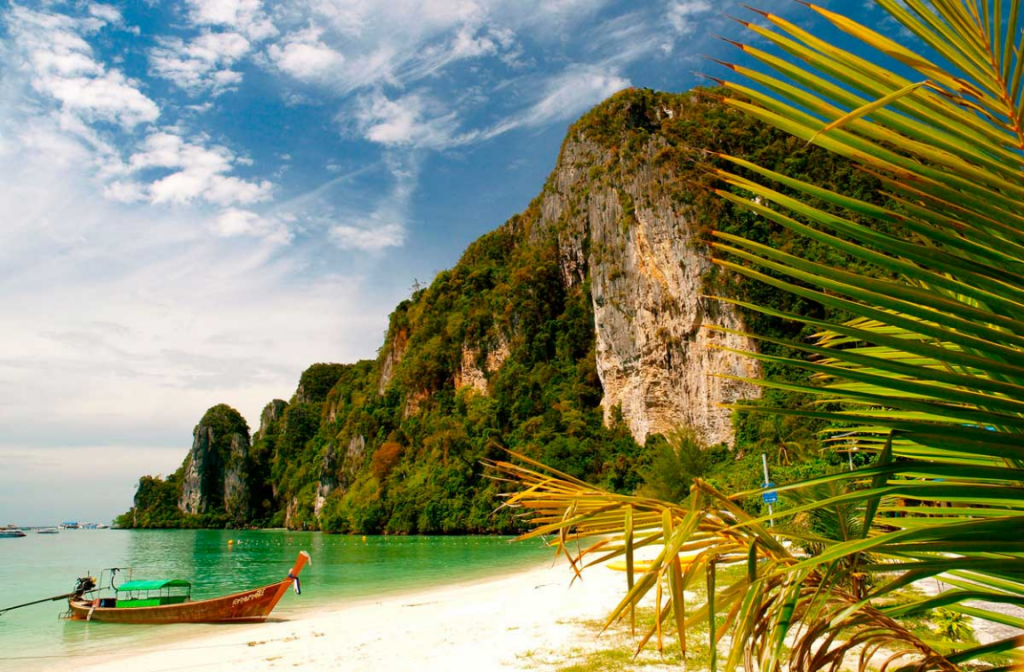 Phuket, located in the south of Thailand, is the largest and probably the most interesting of all the Thai islands.

Phuket has everything tourists need: diverse nightlife and restaurants, old temples, beautiful nature and some of the most beautiful beaches in the whole country. With so many sights to see and so many possibilities, you definitely won’t be bored.

Some people initially find the overabundance of sights and experiences a bit tiring, but this is only an appearance, because you can really relax here. 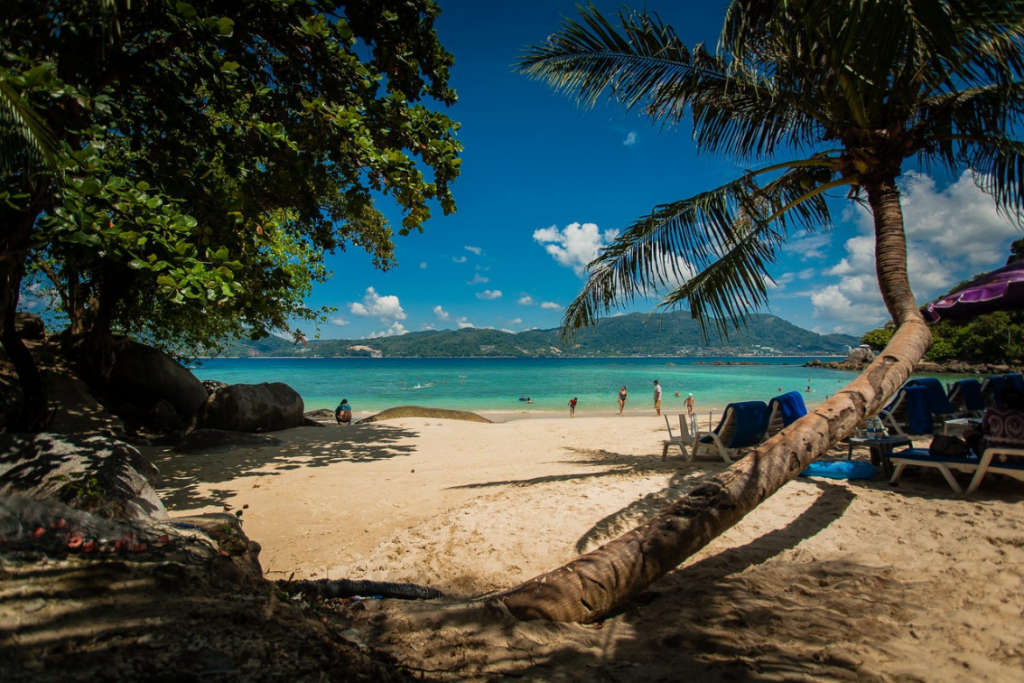 Most tourists take their first steps to Patong Beach on the west coast of the island. But Phuket’s Old Town shows the true face of this paradise island from a time when it wasn’t such a popular vacation spot. Here you will find charming streets with beautiful mansions and old apartment buildings, cramped stores and cozy restaurants.

The old town has a different rhythm from the rest of the island, time flows more slowly and quietly here. In this historic part of town you will find old Buddhist and Chinese temples, ornate apartment buildings, charming cafes, museums and a small red-light district. 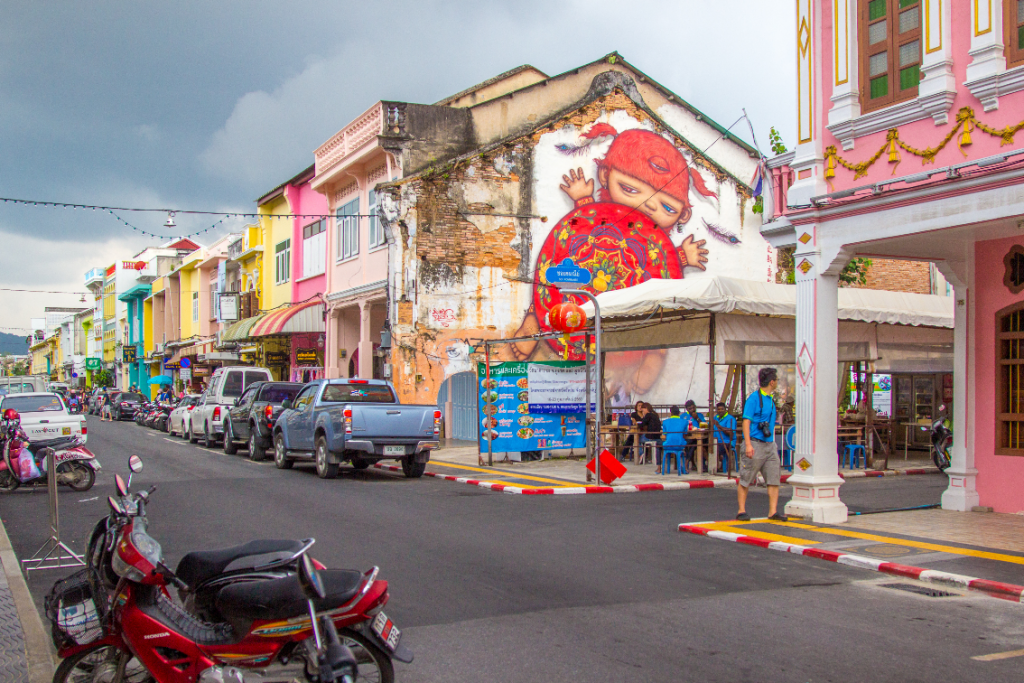 Old Town flourished in the 19th century, when Phuket was very prosperous, as the mining industry was booming in the region. The unique combination of Chinese and colonial architecture and old-fashioned style results in one of the most pleasant memories of walking through the Old Town.

READ
Getting to know the history of Egypt

Most Thais are practicing Buddhists who demonstrate their faith by erecting numerous temples and statues, the most impressive of which is the Great Buddha on Phuket Island.

It is one of the most important and respected monuments on the island . The giant figure of Buddha is located on top of Nakkerd hills between the towns of Chalong and Kata. The 45 meters tall white marble statue can be seen even from Phuket and Karon.

It is worth taking some time and walking the winding road of about 6 kilometers to get to the feet of the Buddha, which offers a delightful view of the whole area.

The beauty of the scenery in Phuket is unimaginable. Here everyone wants to pick up a camera and take hundreds of pictures to save memories of the island paradise from oblivion.

There are many viewpoints on the island (both on the east and west coasts) from which you can admire the entire island and the surrounding Andaman Sea.

The most famous viewpoint is Promthep Peninsula, the southernmost tip of the island, from where on a good weather you can see the island of Phi Phi looming in the distance. 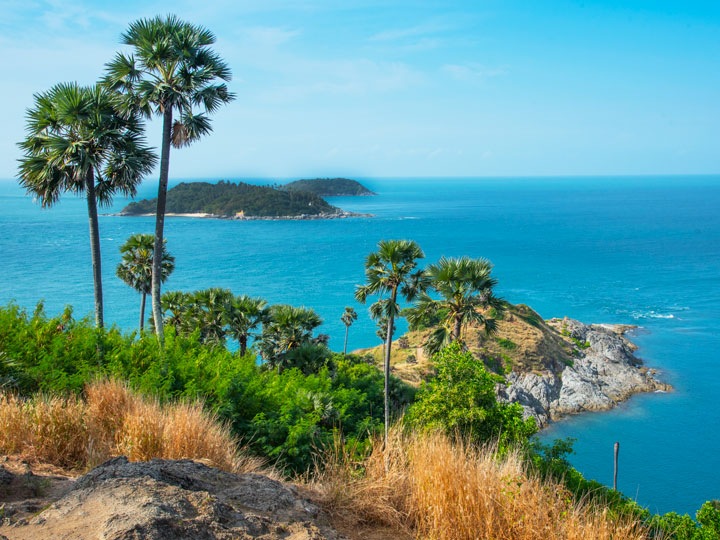 But other vantage points are not far behind. Black Rock Lookout (Pa Hin Dam) is difficult to climb, but definitely worth it. It’s a place completely unknown until 2016. Located high in the rainforest above Ao Sane, it offers unforgettable views of Nai Harn Beach, Cape Promtep and Ko Man Island. 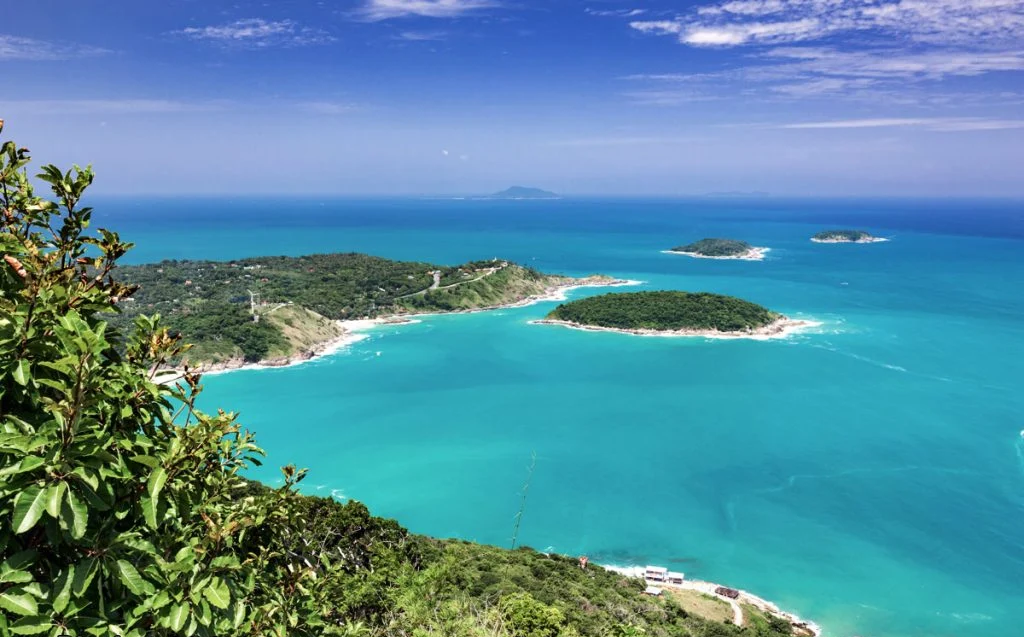 One of the most popular viewpoints on the island is also Khao Rang, located on a hill northwest of downtown Phuket. From the top you can admire the panorama of the provincial capital, the southern tip of the island and the Great Buddha, as well as neighboring islands.

Wat Chalong is considered the largest and most important of the 29 Buddhist temples in Phuket and is visited by thousands of worshippers and tourists every year. Built in the early 19th century.

Wat Chalong has an extremely interesting history. It is also the spiritual center of the island. A visit to this unique temple complex is one of the events on your list of things to do. 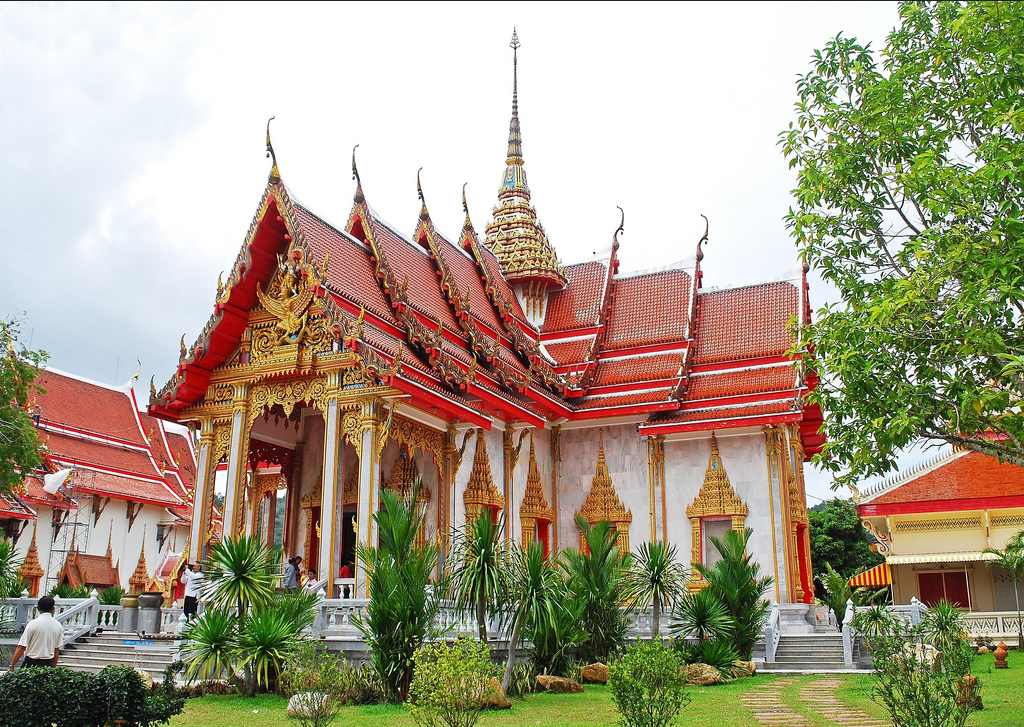 Tourists come here to admire the intricate decoration and learn something about Buddhism, while believers from all over Thailand come here to pray and pay tribute to the several venerable monks who founded the temple.

The place is of extraordinary significance because during the Chinese miners’ rebellion in 1876, it was a refuge for the threatened local population, and the monks, through their extensive knowledge of phytotherapy, helped the wounded.

Patong is home to one of the country’s finest cabaret shows, the Simon Cabaret Show, a spectacular show of dance, music and originality performed by talented “ladyboys”.

Simon Cabaret Show has become one of the unique entertainment venues in Southeast Asia, which attracts 1000s of delighted visitors from all over the world every night. 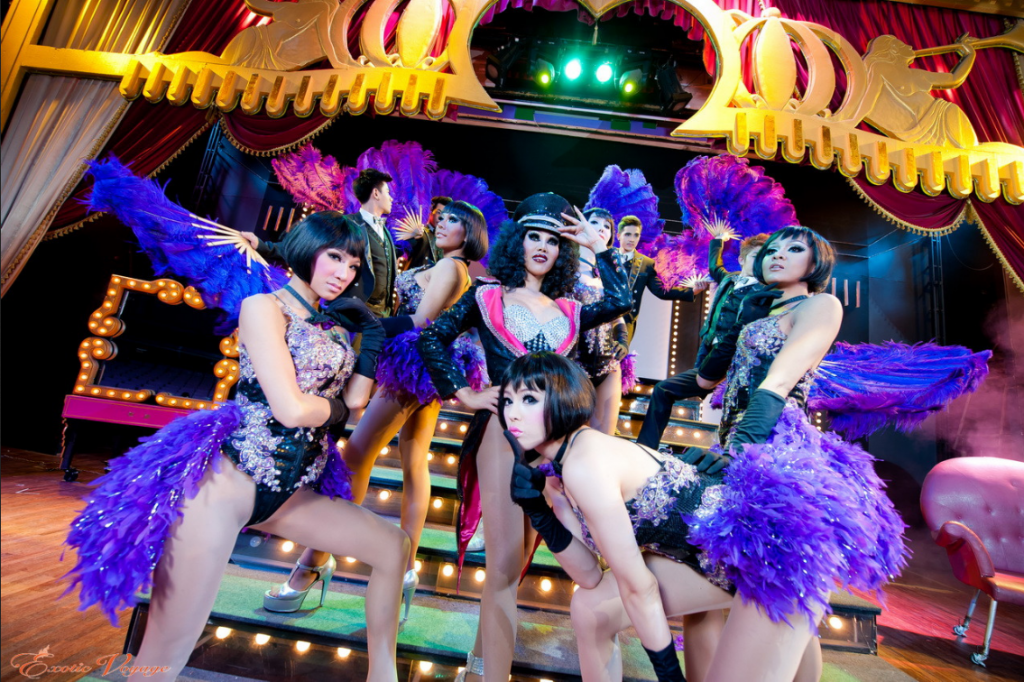 Each program includes different genre scenes, dances and songs from different cultures. Unusual costumes and colorful makeup transport the viewer from Thai Egypt to China or Mexico and back to Thailand.

An evening in a cabaret is truly an amazing spectacle and a great pleasure.

Local markets are often an interesting place for lovers of tourist souvenirs. However, tourists most often do not want to give up a lazy day at the beach to wander among the stalls.

In Phuket, you can easily combine shopping and sunbathing, as the island is famous for its night markets. Each one has its own unique atmosphere and charm, but they all offer interesting souvenirs at bargain prices.

They are also a great place to sample local street food. Many fairs also feature street performances and live music. The most interesting night markets are definitely Chillva Market in Phuket and Malin Plaza in Patong.

If diving is not your thing, you can get acquainted with marine life by visiting the Aquarium of Phuket. Although it does not claim to be the world’s largest oceanarium, there are several hundred species of fish and other exotic sea creatures.

In Thailand, the figures of the Big Buddha are found in almost all major temples. It is impossible not to notice them because of their huge size. In Phuket the statue rises to a height of almost 0.5 km and is clearly visible from various corners of the island.

If you want to truly experience Thai culture and traditions, rather than spend your vacation on the beach on an all-inclusive basis, feel free to take a tour to Phuket’s Thai Village. It is an amazing place where you will be shown the best dance shows, sword fights and Thai boxing.

The Phuket Botanical Garden is recognized by travelers as one of the most impressive places on the island, but what will be most enjoyed here, of course, are horticulture and botany lovers. The garden was opened in 2012, and today covers an area of about 10,000 square meters.

The beautiful half of vacationers in Thailand usually does not miss the opportunity to admire the exquisite pearls grown at local farms. A boat ride to Nakha Farm adds to the romance of the trip.

Many fly to Phuket in search of exoticism: to see the local rich nature, swim in the azure sea and try strange fruits, as well as the famous Thai massage. Meanwhile, the resort has an attraction that more than covers all this exotic entourage.

READ
8 things to do in Riomaggiore, Italy

Cape Promtep is considered one of the best spots in the world for sunset viewing. That’s why this viewpoint on the southern tip of Phuket attracts many tourists and wedding processions, and is also so popular on Thailand postcards.

If you during your vacation in Phuket decided to switch from beach entertainment to sightseeing, it is worth visiting one of the two main cities on the island – Talang. The most interesting place here is the National Museum, it can be described as a local history museum.

Sirinath National Park is a favorite destination for many tourists in Phuket. And here’s why. On a huge territory (the area of the reserve – about eight thousand hectares) there are three well-appointed beaches, untouched by civilization tropical forests, and the shores of the park are washed by the clearest sea.

On vacation I want to not only swim and complete the tour program, but also to buy something for themselves and stay home friends and relatives. And as the vacation budget is melting before your eyes, the market is the best solution for the thrifty.

Tourists who have visited the entertainment complex “Fantasia” (FantaSea) in Phuket write rave reviews about it. This place is a great extension of the holiday for vacationers on the Kamala coast or in the rambunctious Patong area.

Holidays in Phuket are called paradise for a reason: in addition to the alluring gentle sea on the island at every step bloom and fragrance of exotic plants. Especially in the Thai resort a lot of orchids. If royal flowers are on your list of favorites, be sure to schedule an excursion to the Phuket Orchid Garden.

READ
What to see in Bruges. In the most romantic city of Flanders

Phuket Elephant Sanctuary is Phuket’s first elephant sanctuary where old, sick and injured elephants receive specialist care and then live in their natural habitat: walking through the jungle, swimming in ponds, wallowing in mud and socializing with each other.

Phuket is now one of the most popular resorts in Thailand for a reason. In addition to the gentle sea and snow-white beaches there are many interesting sights that will make the rest truly unforgettable. So what excursions are worth planning before your trip to Phuket?

Be sure to visit the orchid garden. There you will see about 1500 species of exotic orchids, and you can buy a keepsake jewelry made from real flowers.

The Thai resort is famous for its Buddhist temples, so be sure to include the most famous Wat Chalong Temple in your list of Phuket attractions to visit.

For a thrill, you can go to the snake farm, where every day for tourists show a show involving king cobras and pythons. Another exotic waiting for holidaymakers at the Aquarium of Phuket, where the divers feed especially for the audience from the hands of sharks and other sea creatures. Learn more about Thai culture and traditions in the ethnographic village called “Thai Village Phuket”. Here you will show vivid dance shows, the best martial arts tournaments and even play a national wedding.

The Thai resort is famous for its Buddhist temples, so be sure to include the most famous Wat Chalong Temple in your list of Phuket attractions to visit.

The rest of the time you can devote to no less famous attractions of Phuket – the national park “Sirinath”.

There are three large beaches here, as well as Phuket’s largest water park, Jungle Splash. These are the most popular attractions of Phuket, but everyone, resting here, will be able to discover something new.