This is a great way to visit Lonato del Garda (Italy, Brescia).

Beautiful city, beautiful architecture, lots of attractions, convenient location, there is a big supermarket nearby.

Hello dear readers and visitors to the site! In my review, I want to tell you about an Italian town located in northern Italy, more specifically in the south-western shore of Lake Garda. The population of this city is as much as 70 thousand people. In the center of the city and in the streets in general, not a lot of people. Especially from noon to 3 pm generally empty everywhere, all the stores are closed, the Italians are resting. In our countries one can only dream of such a break for lunch! A large crowd of people can be seen in this town not often, usually when its residents and residents from neighboring towns come to arrange a mercatino (open-air street market), where you can find anything you want. Basically this market is a collection of all old things, figurines, records, tools, pieces of furniture, etc.

The town itself is beautiful. There are not many streets in the center, they are all narrow, it is not very convenient to go by car, because if you miss your turn, you have to do a whole circle, bypassing the whole center. Parking is also a problem. Approximately about a kilometer from the historic center there is Stazione, in our words a railway station. At daytime you can not hear the noise of the trains, but at night you can even feel the vibrating floor in the house from the speed of the “flying through” train, especially if it is Frecia Rossa (so called very fast train in Italy). Not far from the city center there is a supermarket Famila, where you can buy everything you need (food, drinks, some home appliances, clothing). Prices are quite low compared to other supermarkets in Italy. In the heart of the city there is a square – Piazza Martiri della Liberta, where there are several landmarks of Lonato. One of them you can see in the photo below is the Cathedral of San Giovanni Battista, founded in the 19th century. 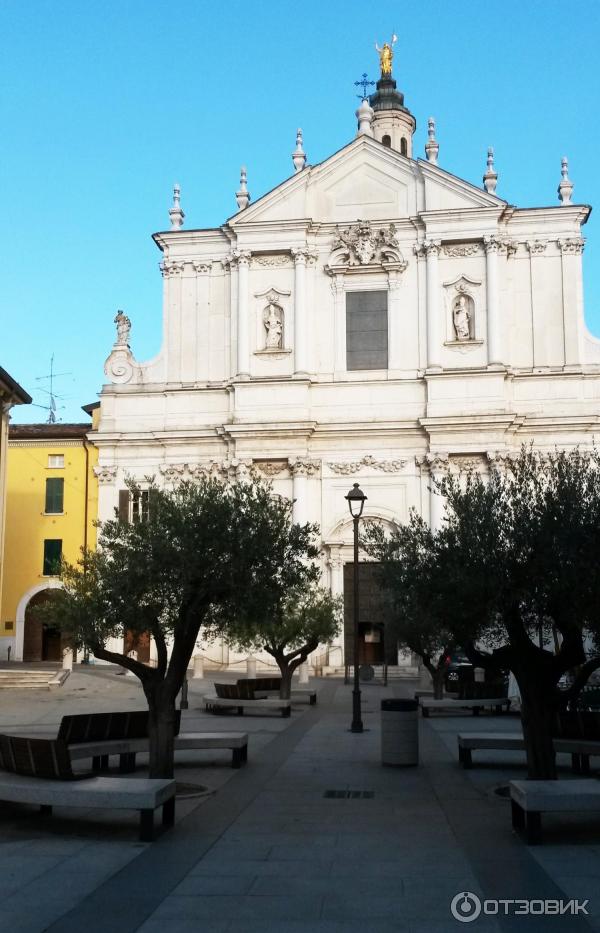 And also the Clock Tower (Torra Civica), which is 55 meters high.

The central part of the city is located on a hill and the cathedral and the tower itself are visible from afar as you begin to approach the city. 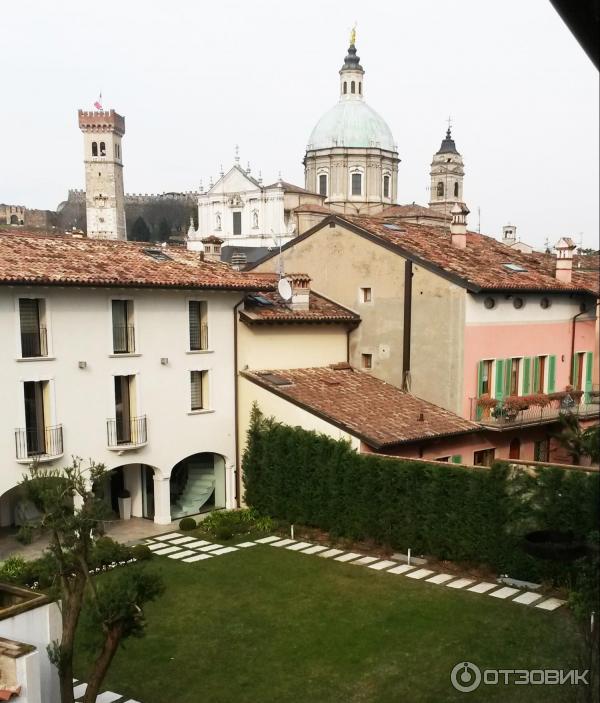 In these parts the weather changes often. You can see black clouds that envelop the city and at the same time the sun. 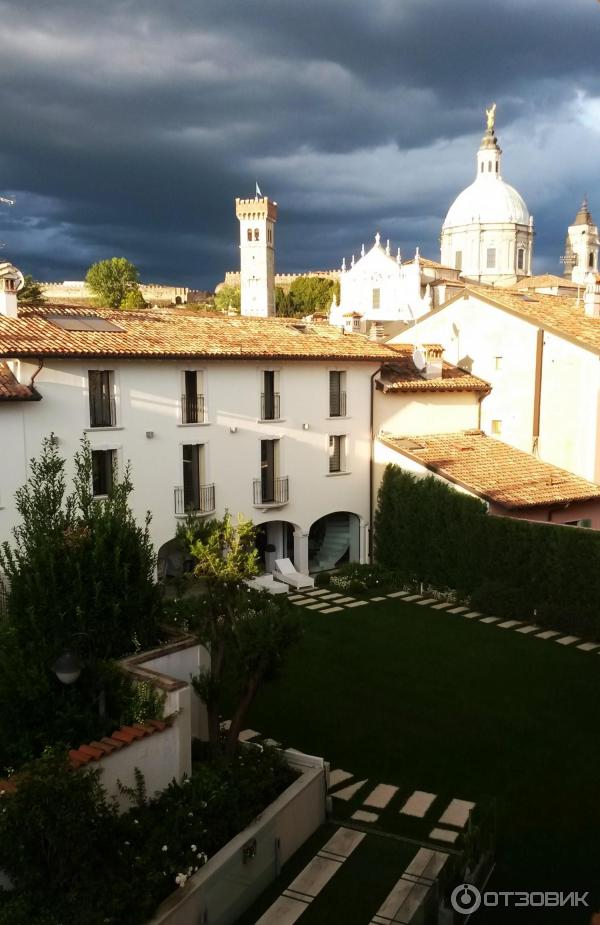 San Giovanni Battista Cathedral on the other side. 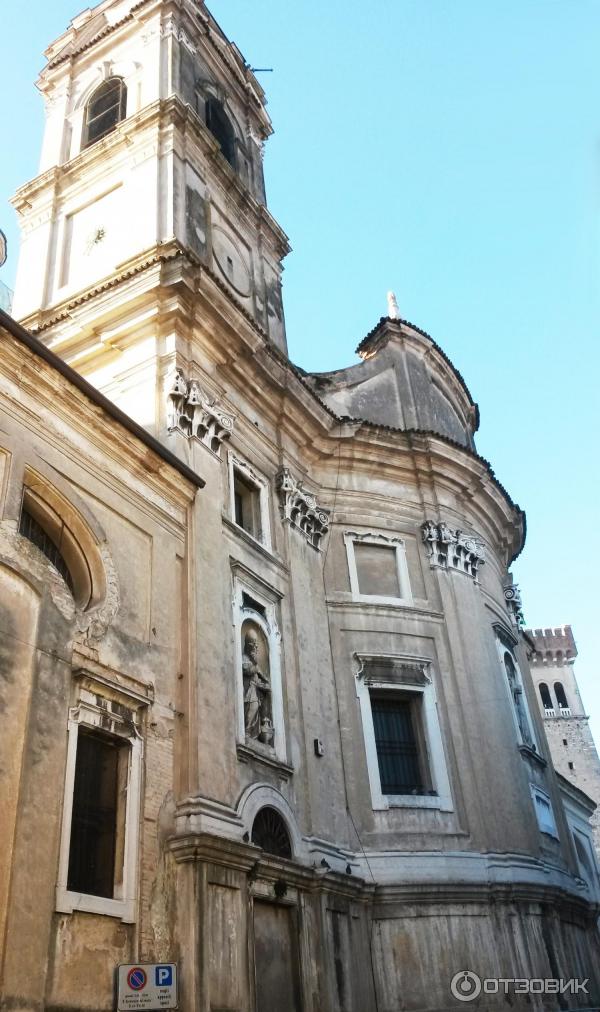 The inside of the cathedral is quite spacious. I liked it. 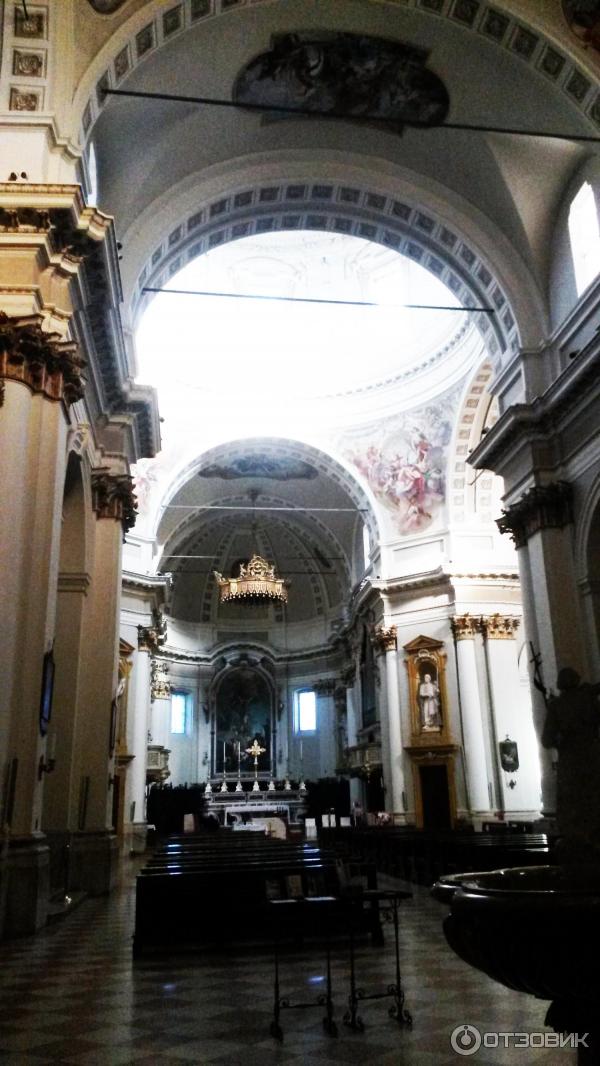 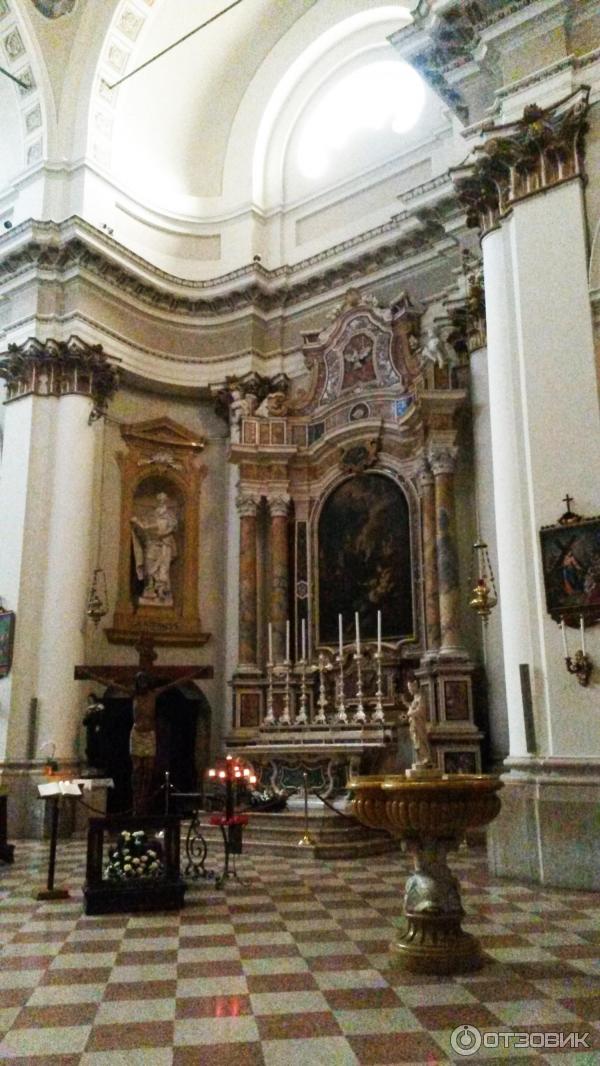 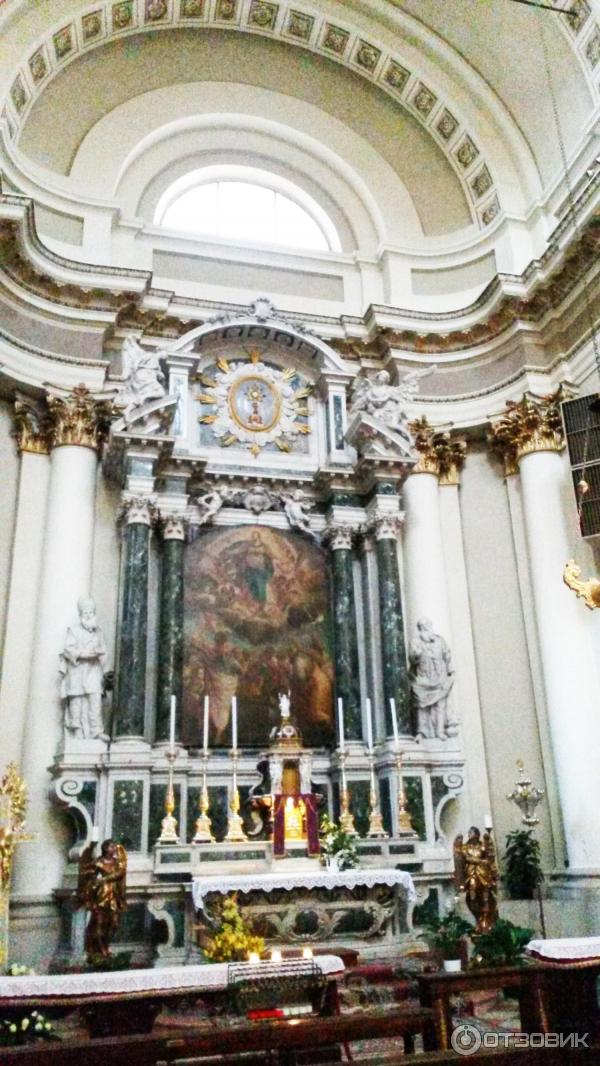 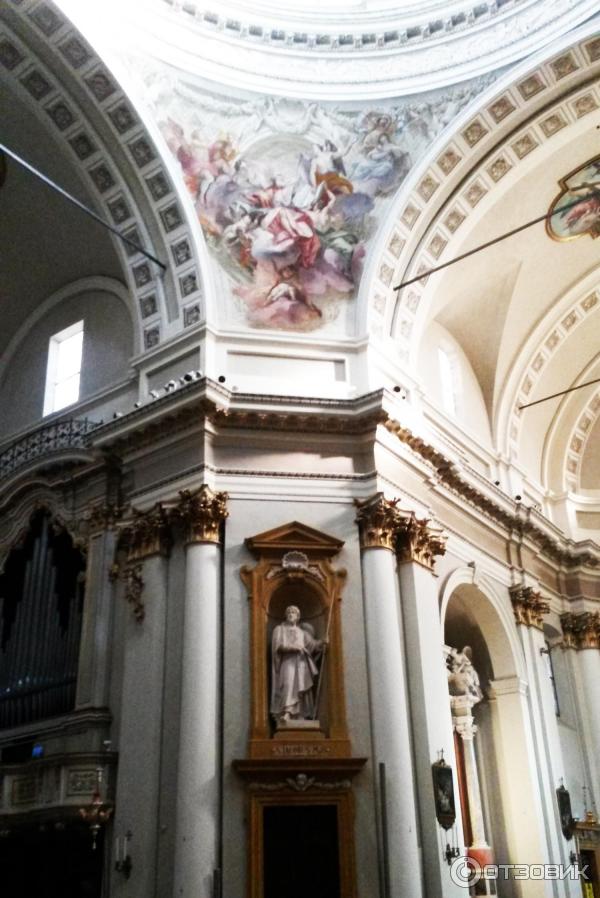 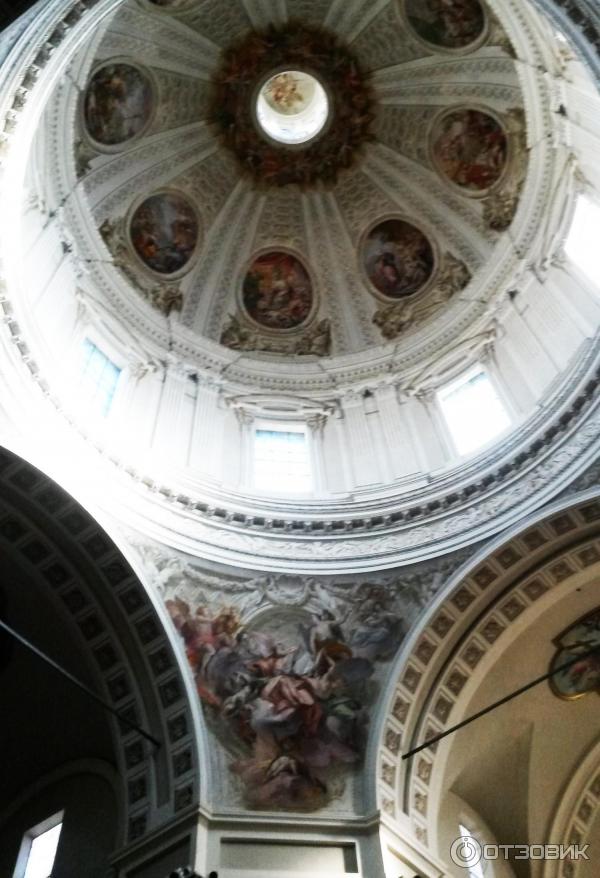 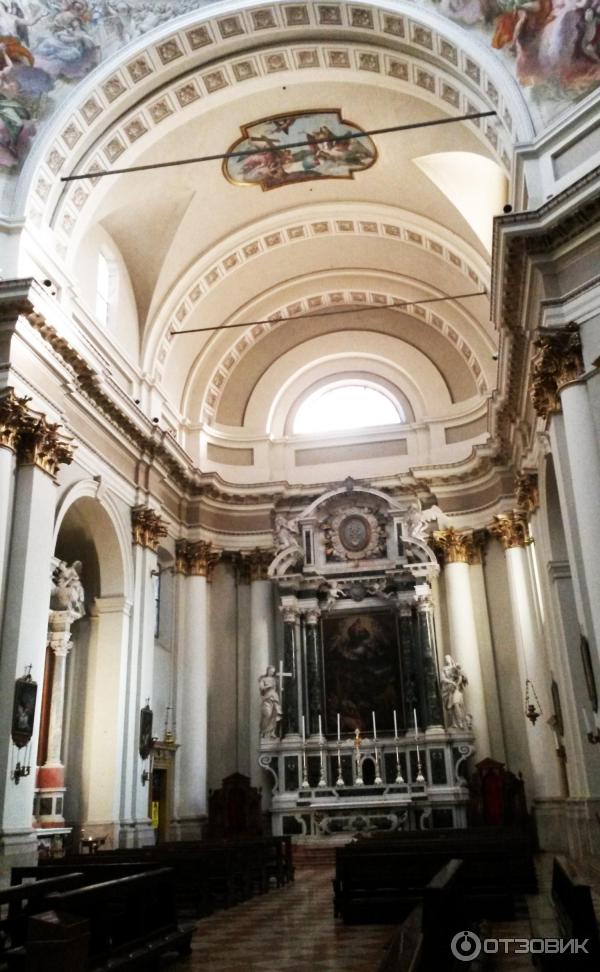 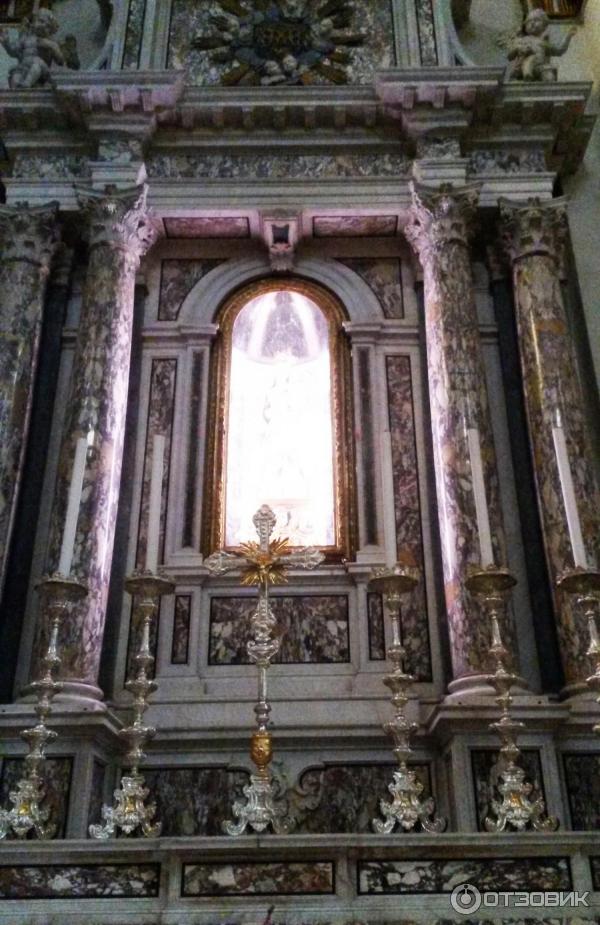 The houses are all in the same style. 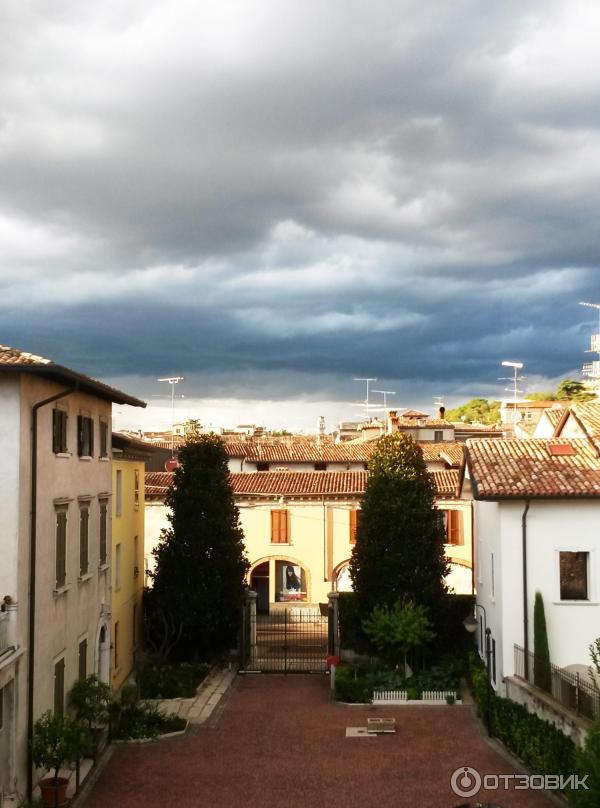 And here is a small square (Piazetta), located just opposite the cathedral of San Giovanni Battista. In it you can relax after walking around Lonato, under the shade of some olive trees. 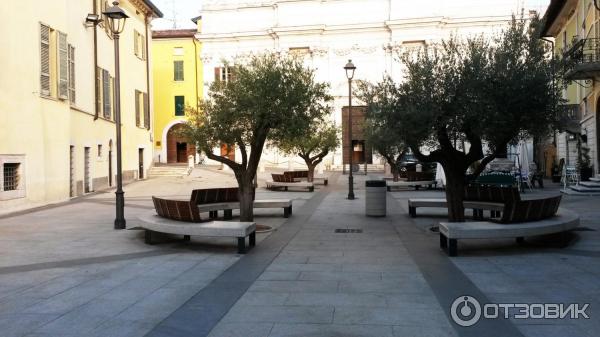 Ripe olive trees. but I didn’t try to pick them. The Italians are very respectful of these trees. 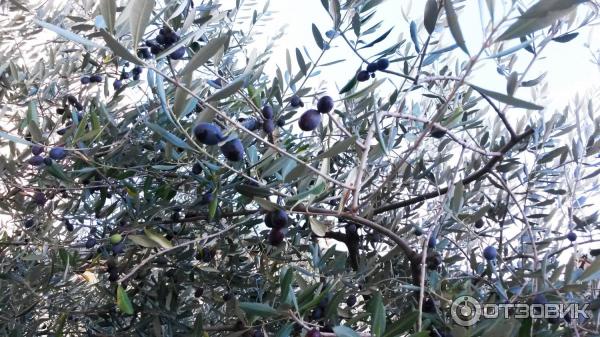 The clock tower, mentioned earlier, is on this little old street. 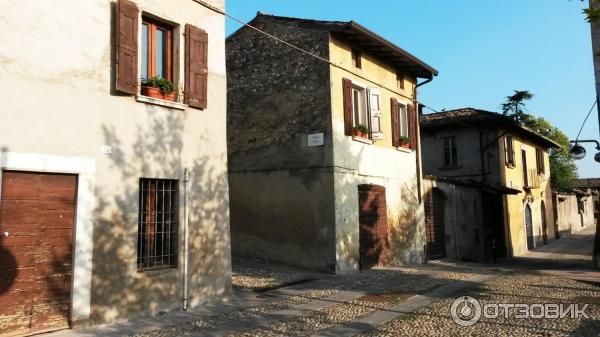 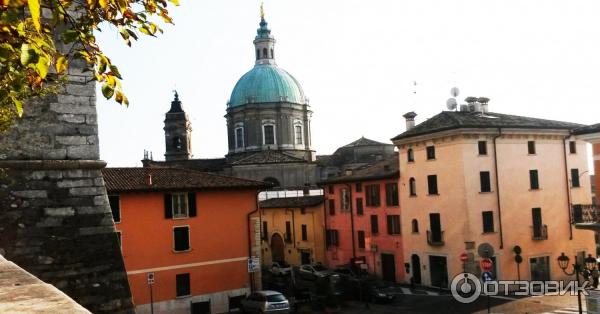 In Italy, Christmas is celebrated on December 25. Usually there is no snow in this city in winter. But no one cancelled the decoration of small stores with souvenirs. 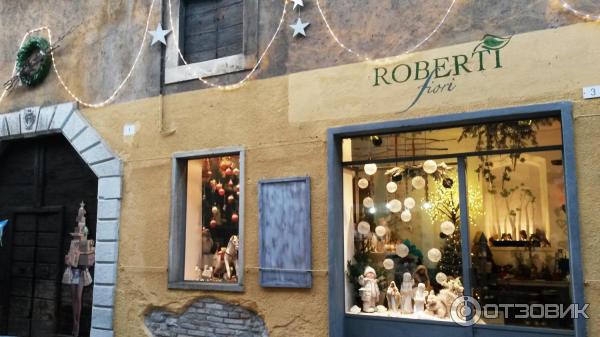 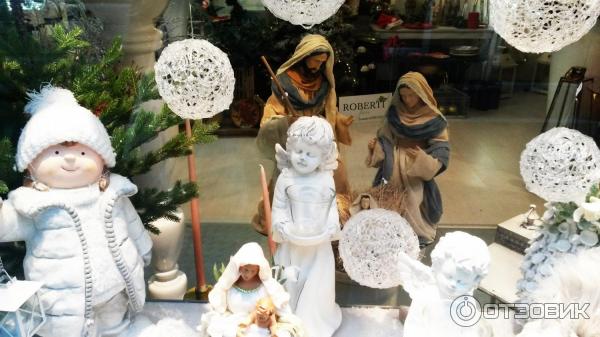 This store was closed for lunch, so I only took a picture of the store window. 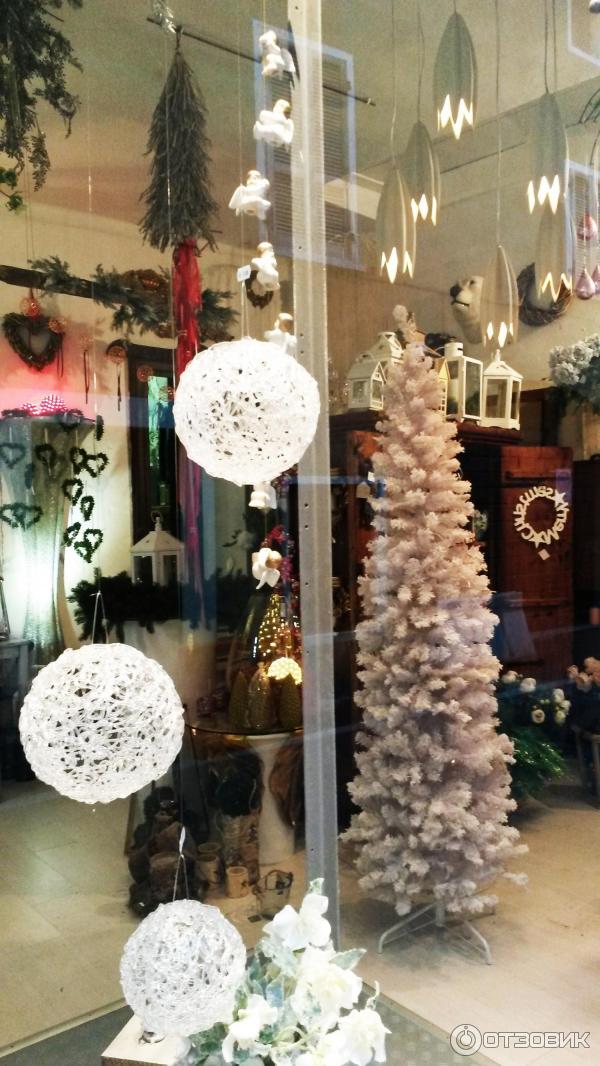 This cute little town has everything you need. On the main street there are a few kiosks with cigarettes Tabacchi), where by the way you can buy all sorts of things, candy, toys, recharge or send Western Union, a few bars (cafes), travel agency, real estate agency, confectionery, bread store, a fruit and vegetable store, many hairdressing salons, restaurants and trattorias, several flower stores, one with tattoos, a barbershop for dogs, several Gelateria, a special cafe where you can treat yourself to ice cream. And that’s not the whole list.

The town of Lonato del Garda is located between Venice and Milan, about halfway along the freeway. From the freeway, leaving at Desenzano del Garda, you will reach Lonato in 5 minutes.

That’s the end of the story. Who will be in these parts must see it, I’m sure you will like it!

Lakes of Northern Italy, part one. Garda – the most “beautiful sea” of the country. It seems to have it all: sports, architecture, history, beaches, thermae and family parks.

The lakes of Northern Italy – one of the most popular destinations for travel in the country: easy to fly to Milan (including by low-cost jet) and to travel between cities with excellent infrastructure by rented car. At the same time – fresh air and almost wild nature: mountains, clear water lakes, cypresses, olive and orange trees with vineyards on the shores and wide beaches.

Holidays on each of the lakes will be different. Garda – top for adepts of sports and healthy lifestyles, Iseo – an example of the harmonious blend of nature and art, Como – aristocratic combination of parks and gardens.

About the cities and attractions around the iconic Italian lakes tells Mila Ulchenko – author of the blog Una Russa In Italia. The first part is about Lake Garda and everything around it. “Italy’s most beautiful sea” is what travelers from Northern Europe call Lake Garda. The azure water in the lake, mountains, olive groves, cypresses, citrus plantations and vineyards attract tourists here. Movies are often filmed here – it was in Garda waters Aston Martin flew in the James Bond movie “Quantum of Solace”. Thanks to the mild climate in Garda you can come all year round. In winter it is dry and not cold. Rain, and even more so snow is rare. The heat is not so strong in the summer because of the mountains and the constant winds.

Transport: how to get between the cities

Garda is divided into four parts: the region of Trentino Alto Adige to the North, Venice to the East, Lombardy to the West and Lombardy and Venice to the South. The logistics of travel on the Garda are tied to three cities: Trento in the north, Verona in the east and Brescia in the west.

READ
Cheverny is one of France's most famous chateaux

By ferry. The most scenic way to travel between the cities is by ferry. They run in season from mid-April to October or November, depending on the weather. One-day passes allow you to make an unlimited number of trips between cities and cost 34 euros (2,800 rubles). Passes valid only in the southern or northern parts of the lake are 20.5 euros (1,700 rubles). Find more information about the routes and schedules at Navigazionelaghi.it.

By Car. For those who go to Garda in the summer, choose weekdays from Monday to Thursday. Beginning on Friday, Italians and visitors from neighboring Germany go to the lake, so you can’t avoid kilometer-long traffic jams. If you do go on weekends, devote them to one city, so as not to be stuck in traffic, moving from one attraction to another. Or take a ferry and walk in the cities.

By train. From Verona and Brescia, trains go to Desenzano del Garda and Peschiera del Garda, from which it’s convenient to start on the western and eastern parts of the lakes, respectively.

By bus. Buses to Lazise, Bardolino and Garda depart from the center of Verona – from Piazza Bra. Bus numbers: 162, 163b, 164. From Garda and further north along the coast to Riva del Garda runs bus number 484. In the summer, the 483 bus goes from Peschiera del Garda to Riva del Garda. It goes along the eastern shore of the lake and stops at the main settlements. There is also a direct bus to the lake from Verona airport in the summer: convenient that you don’t have to stop in the big city. The schedule of buses is on the website of the carrier. In winter, the number of destinations decreases. In the Info Bus Verona app, you can build a route and find out the cost of a trip between cities.

Tickets are sold at bus stations, in tobacquerias – small stores or stalls that sell cigarettes, magazines, lottery tickets. You can also buy from the driver, but the ticket will cost more.