Jaffa Gate – the main entrance to the Old City of Jerusalem.

The ancient capital of modern Israel is a very important city for most Jews, Muslims and Christians. The cradle of the three major religions is the true center of the world for a huge number of people.

The historic center of Jerusalem

Colorful Jerusalem has a spiritual attraction and is famous for the intricate labyrinth built by King David’s order. A visit to the Old City offers historical and religious monuments that immerse you in the atmosphere of bygone eras. During the Middle Ages, the central part of cities was surrounded by fortified walls to protect the inhabitants from attacks by enemies. The historic part of Jerusalem is also protected by a 4 kilometers long stone wall, built of strong blocks. There are eight gates leading to it, one of which has long been bricked up.

History of the gate

You will be interested in: Recreation base “Shikhany” in Sterlitamak: description, how to get there, reviews

The iconic landmark of Jerusalem, facing the Mediterranean Sea, appeared during the reign of Suleiman the Magnificent. In 1538 the sultan ordered the construction of a gate through which the way led to Jaffa (Jaffa), the main port of ancient Israel. Jaffa Gate, which is located on the western wall, was once called the gate of David, because behind them is the famous tower of David. They are the main, because through them for centuries passed hundreds of thousands of people who kept the way to the port of Jaffa, which served as the main artery of the sea. At night the gate was closed, and those who did not have time to go inside, remained outside the walls of the city until morning.

The most unusual gate among the rest

The Jaffa Gate in the Old City is 12 meters high. Surprisingly, it is not cut through directly and differs from the others in that it is erected at right angles to the wall. Researchers speculate that this was done to slow down an attacking enemy in case of an attack. Enemy horses would have crashed against the strong walls, and if soldiers tried to break through they could be safely fired upon.

A symbol of Jerusalem’s unity.

True, under the Turks there was no conflict, and the structure remained decorative. However, during the War of Independence (1948-1949), the square near the gate became the site of fierce battles.

Under the cease-fire agreement between Jordan and Israel, it was the Jaffa Gate that became the entrance to no one’s territory. And while the city remained divided, they were sealed off. After the end of the war they were opened as a symbol of a unified Jerusalem.

On the inside of the gate, behind the iron bars, are two graves that draw the attention of tourists. Historians cannot say for sure who found their last resting place here. However, there is a legend that says that these were the architects who renovated the fortress walls. The architects violated the plan of the city and did not take into account the presence of the sacred Mount Zion, which remained outside of Jerusalem. They were executed by the Sultan, but for their great merit they were buried within the city next to their offspring. The only breach in the wall

The Jaffa Gate, which has changed owners more than once, has never been subjected to destruction. And the only “wound” was the breach next to it. It is now an integral part of the gate. The road to the Old City goes through it, and that is why most tourists prefer to use it. The Emperor of Germany, who had far-reaching plans for Jerusalem, wanted to enter it in 1898 on a white horse like a winner. He knew the legend that the last conqueror of the city was to enter through the Jaffa Gate. Kaiser Wilhelm II refused to enter on foot, which was considered a show of respect for the city. That is why the Ottomans decided to deceive the King of Prussia and to satisfy his vanity made a free passage next to the Jaffa Gate, for it was small for a procession. The chancellor later suffered a crushing collapse in the political arena, and many have attributed the event to the fact that he desecrated Jerusalem by entering it in a luxury carriage rather than entering on foot by kneeling.

READ
The Vatican City State of the Pope

A monument that retains its original appearance

In the nineteenth century the reconstruction of the Jaffa Gate in Jerusalem began and it was transformed into a commercial and business center. There were architectural improvements, which were each time removed. The clock tower and the pavilion for tourists were removed at the beginning of the last century in order to present the historic appearance of the Old City.

The restoration of the landmark of Jerusalem, which was supervised by the Government of Israel, was completed a few years ago. The large-scale project was launched in order to restore the stone walls of the historic center and protect them from destruction due to weather conditions. Stones that may have endangered the safety of tourists were replaced, bullet damage was plastered over, and decorative elements were repaired. The memorial plate, which was in poor condition, was fully restored.

Now the monument has been restored to its original appearance, and visitors can even admire the ancient Arabic inscription in honor of Allah and the ruler of the Ottoman Empire that adorns the gate. So visitors to Jerusalem see its symbol as it was six centuries ago. The passageway to the west of the Old City is very popular with vacationers because it has a convenient entrance and leads to the market. Just beyond the Jaffa Gate, whose photo is in the article, a tourist-oriented street begins. At the junction of the Armenian and Christian neighborhoods there are many souvenir shops, cozy cafes and stores.

Near the gate there is a parking lot for visitors to the city, located underground, as well as the famous shopping center Mamila. In addition, here is a tourist center, where everyone can get free guidebooks in Russian and a map of the old city. 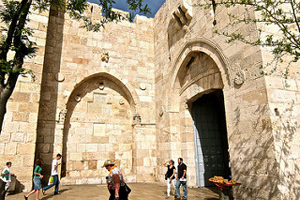 Jaffa Gate is one of eight gates within the walls of the Old City of Jerusalem through which a considerable flow of people still passes today.

In the Middle Ages, the central part of the city of many cities was surrounded by a wall for protection, and Jerusalem is no exception. To exit the city one had to go through one of the gates, among which was the Jaffa Gate which is on the west wall.

The gate was built in 1538, as part of the reconstruction of the city’s fortifications begun by the Ottoman Sultan Suleiman I. This gate was the only one on the western wall and the way through it led to the port of Jaffa.

For many centuries, the Jaffa Gate has allowed a large flow of pilgrims, merchants, and residents through every day, virtually unchanged and unreconstructed. Only in the 19th and 20th centuries, certain architectural innovations were introduced into the surrounding area and the gate itself, which have now been removed, and the monument itself has regained its original architectural look.

The only major change that has survived is the breach near the gate which is now structurally part of it and through which the road leading to the Old City of Jerusalem is laid. This breach was made for William II in 1898. There are two versions:

In any case, the break in the wall was necessary, and if not at the end of the XIX century, it would have to be done later – no gate does not allow to lay a normal motor road through it. And so the breach near the Jaffa Gate is still in use today, but it remains on the conscience of William II.

READ
The best cities to visit in Greece

General Allenby enters Jerusalem in 1917. Part of the clock tower above the gate is visible

Among other changes was a clock tower built over the gate in 1908, and in 1912 a pavilion for tourists was added to the Jaffa Gate. But both the tower and the pavilion were demolished under British rule in order to preserve the historic appearance of old Jerusalem. In 2010, a minor reconstruction was carried out, during which the gates were washed and the stones were replaced and the historic inscription was restored, so that the gates are now as they were in the 16th century.

The Jaffa Gate is about 12 meters high and is built of large stone blocks. The height of the passage itself is 6 meters.

An interesting feature of the gates is their direction – they are not cut through directly, but have an L-shaped passage, the entrance is parallel to the wall. It is not known exactly why this was done, most likely either for convenience, to direct the flow of people directly to the main road, or for additional protection, to slow down hypothetical attackers.

Near the Jaffa Gate there are two graves that are commonly attributed to this landmark. It is not known exactly who is buried in them, but legend has it that they are the architects who reconstructed the city walls. Allegedly the Sultan ordered their execution because they violated the plan and did not include a number of important places in the perimeter, but as a sign of respect they were buried within the city limits.

There are no architectural decorations inside the passage, apart from a vaulted ceiling and protruding pillars. On the outer wall inside the gate is a narrow loophole. At the exit from the city the Jaffa Gate has an old Arabic inscription in honor of Allah and Suleiman I.

The Jaffa Gate is the only gate in the west of Old Jerusalem. At the same time this passageway in the walls is one of the most popular among tourists because it has a convenient entrance and leads to one of the markets.

The tourist street begins just outside the gate.

After passing through the gate, the visitor comes to the junction of two quarters: Armenian and Christian. Right outside the gate begins a tourist oriented street with many souvenir stalls, cafes, fast food, etc.

The most notable landmarks near the Jaffa Gate are the Tower of David, the old Citadel of the city.