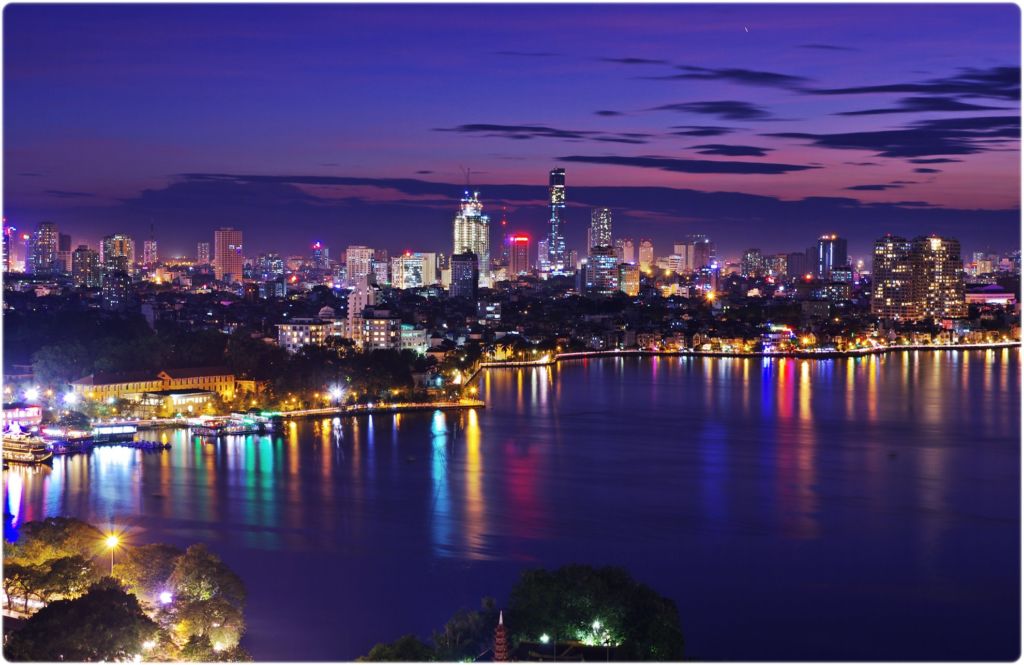 Hanoi, the capital of Vietnam, is rich in sights of all kinds. It is a beautiful city with mesmerizing architecture and a rich cultural heritage, combining a modern metropolis and historical Asia with Buddhist temples. The trip will be remembered for a long time and will be full of content, if using the map to build your route in advance. Then you can see the maximum number of interesting sites, even if you have only one day.

Sightseeing in Hanoi, which can be visited in one day

If you came for a couple of days and you want to see a lot, you can go two ways, either go to the center, which often leaves a lot of tours of cultural buildings, or go to the bridge Long Bien and cope with the Red River. The latter option is especially recommended for couples in love, get an unforgettable experience. 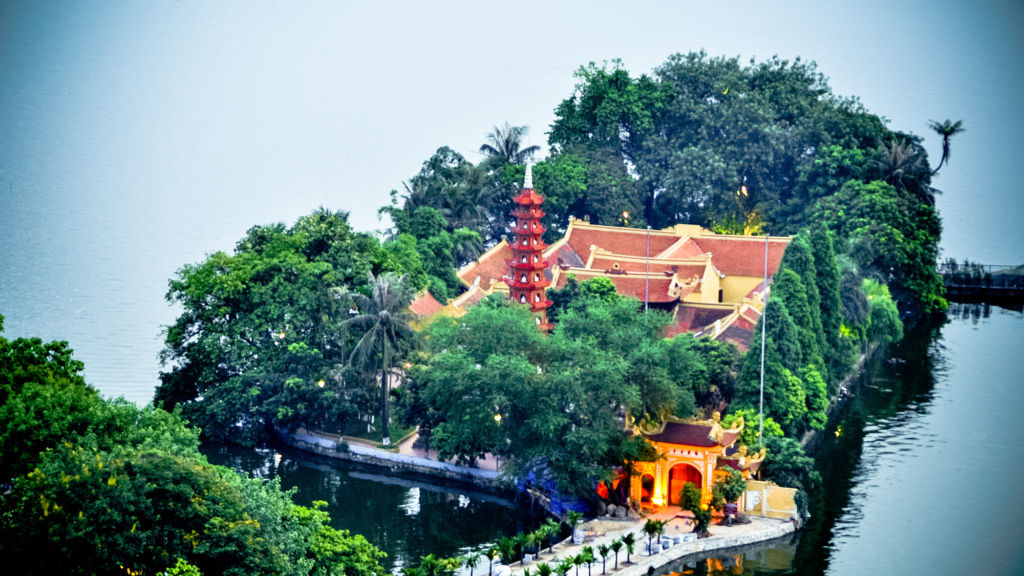 The Pagoda on the Island

Long Bien Bridge, and the Hanoi Citadel are two of the most popular places to take pictures. For those who like unusual photos, it is worth going to the Hanoi Ceramic Road or the old “36 Streets” quarter.

This place is like a handwritten chronicle, because both the citadel itself and the nearby castles and residential buildings clearly tell about all the main events of these places. Almost all the buildings were built in different centuries and very often were subjected to destruction. Hanoi Citadel is not only a national treasure but also a World Heritage Site.

Chua Mot Kot or One Pillar Pagoda is a Buddhist shrine that has an unusual architectural style. This temple is small, which locals say emphasizes the modesty and aesthetics of being a Buddhist monk, and it stands over water all on one pole, which looks very mesmerizing. The temple is in the center of the city, so when you are in the center be sure to stop by this place.

Ho Chi Minh Mausoleum is one of the main attractions in Vietnam and is very popular with tourists and locals.

Architectural monument to the famous Vietnamese political figure who did a lot for this city and the whole country. The locals revere him and love to tell stories about him. The building itself is very beautiful and majestic, which emphasizes the importance of the man. The surrounding area is always cleaned up, and on important days, very beautiful parades are held here. I also advise you to visit the mausoleum at night, a very beautiful sight.

On the West Lake Island is the oldest building in the city, which is called Changquoc. It is a pagoda that has long been considered the center of Buddhism, and at the moment – this sacred place is open to all comers. In addition to the interesting architecture of the buildings, you can admire the surrounding nature. It is advisable to visit this place during one of the Buddhist holidays where hundreds of monks gather and hold their religious rituals and talk about their religion.

This forty-meter tower is located on the way to the Hanoi Citadel, which should not be missed in any way. It is one of the few structures that survived the country’s hard times. And locals speak of the tower as a symbol of Vietnamese resilience. The tower is a multi-level structure and each level can be climbed, and from the observation point of the tower offers a beautiful view of the city and the historical museum.

Tay Lake is the largest lake in the country and also one of the most popular places for folk festivals. The size of the lake allows for performances here with large floating structures, and there are many gardens, parks, and marketplaces on the shore side where you can buy a souvenir or try out a folk dish.

READ
Man shall not live by bread alone... Berlinski pizza

A trip around Hanoi would be incomplete without a visit to this museum, because it reveals the true cultural component of these places like nowhere else. Under one roof, there are hundreds of pieces by contemporary artists as well as those who lived hundreds of years ago. Looking at some paintings one can experience the most unimaginable emotions, especially if you understand at what time and under what conditions were painted some paintings.

Vietnam is a country of many religions with many monuments and places where people of different religions can go. A striking representative of Catholicism is St. Joseph’s Cathedral. This incredible building captivates with its Gothic architecture and towering above the rest of the world. This is one of the tallest buildings in the city and is very popular. Many devotees of Catholicism and travelers from other countries visit this place. And on Christian holidays you can see very interesting events.

For all those interested in the more contemporary history of Vietnam and who like to learn and examine the military equipment should go immediately to the Flag Tower, next to which is the same museum. There are dozens of different ground and air vehicles in all their beauty. Some exhibits are completely restored, and some remain in a dilapidated state in the form of military installations. In addition to the usual tour of the equipment you can learn a lot about it by reading the documentation available in the museum or by talking to the staff.

If you are interested in the history of this country in all its details, the best place to start your study is this place where there are collected tools and recreated buildings with folk clothes. There are also many different books, in which you can learn a lot of interesting facts about the city and the country. This museum often hosts good tours, after which you look at the city and its inhabitants in a completely different way.

When you come to this city without knowing the language, you can get confused and miss a lot. But here’s where you can’t miss anything, it’s in the house of literature, where there are thousands of books, which can explain and translate. In addition, this place can teach you the basics of the Vietnamese language, so that the trip was richer and more productive. And on holidays there are gathered a lot of people and organize various performances. One of the most popular is the contest of calligraphers, it is held on New Year.

Vietnam has endured many different wars, about which many books and stories have been written. But all these stories mention the greatness and bravery of the soldiers who defended the country. But as you know, not only men are involved in the war, but also women. That’s how this museum came to be, where all the history of local women is collected: stories, household items, clothes and much more can be seen in a large building.

Puppet Theater on the water

Often in Hanoi there are theatrical performances, but not just like a regular theater, here most of all the action takes place on the water. All the puppets are very smartly dressed, and the performance itself is accompanied by live national music. What is happening on the so-called stage is mesmerizing and will not leave indifferent fans of such a performance. However, all performances are in Vietnamese, which makes it somewhat difficult to understand the story for people who do not speak the language.

Literary Museum is located in the manor house of the Lotharevs, associated with the name of the king of Russian poets Igor Severyanin (I.V. Lotharev)

This building is small in size, but with a big soul inside. A must visit for those who love music and opera performances, but also recommended for all the many who want to experience the culture of the city. If you don’t visit this place you won’t miss much since you can always listen to the real music of the local streets, which is just as good. But this place is worth visiting if only to look at the beautiful mixture of several styles of architecture.

READ
The most luxurious adventures in Barcelona, Spain

Since Hanoi is the capital of Vietnam, the head of the country will be located here. And the president is located in his palace, which is fundamentally different from all other buildings in the city. The fact is that the palace was built at a time when the country was colonized by the French and at that time suffered a lot of local canonical buildings, however, the French architects have built their own. One of these is the Presidential Palace, which is always beautiful and well maintained, as befits the main building of the city.

Hanoi ceramic mosaic or ceramic road is the very mirror of the inner world of the inhabitants of the city. Here, as in the whole city collected at different times of different motifs that convey what was the main event in the city in a particular year. Similar cultural paintings are very few in the world, which makes being in this place causes genuine emotions of admiration and joy.

The old quarter of “36 Streets”

On the site where there used to be marshes now adorns one of the main streets of Hanoi. This is the most crowded and colorful place that perfectly conveys the mood and special rhythm of the city. On this street is the largest market hall, where the best artisans and chefs are ready to sell their art and culinary works.

One of the most peaceful places in town where you can just relax and unwind from the bustling streets and roads of Hanoi. Around the lake there is a park where you can walk and meet small animals, and the lake is an ancient structure Turtle Tower, which is accessible only by water. You can also see near the lake Jade Mountain Temple, where the monks serve and lead tours.

This bridge is considered a favorite spot for couples in love, who walk here and enjoy the view. You can also often see clusters of photographers who like to take pictures of the setting sun in the arches of the bridge, and it really is an incredible sight. It was also built by French engineers, so the bridge itself lacks the charm of Vietnamese architecture, but the scenery framing the bridge makes you forget everything and just stop and enjoy the view.

The Hanoi Hilton is a former prison which now houses a museum and several apartment buildings. This prison was built by French colonists to imprison political infiltrators there. After the prison was practically destroyed, only small buildings remained, which later were bought out by various companies. Now you can walk through the museum, which is dedicated to difficult times in Hanoi, also there are interesting excursions.