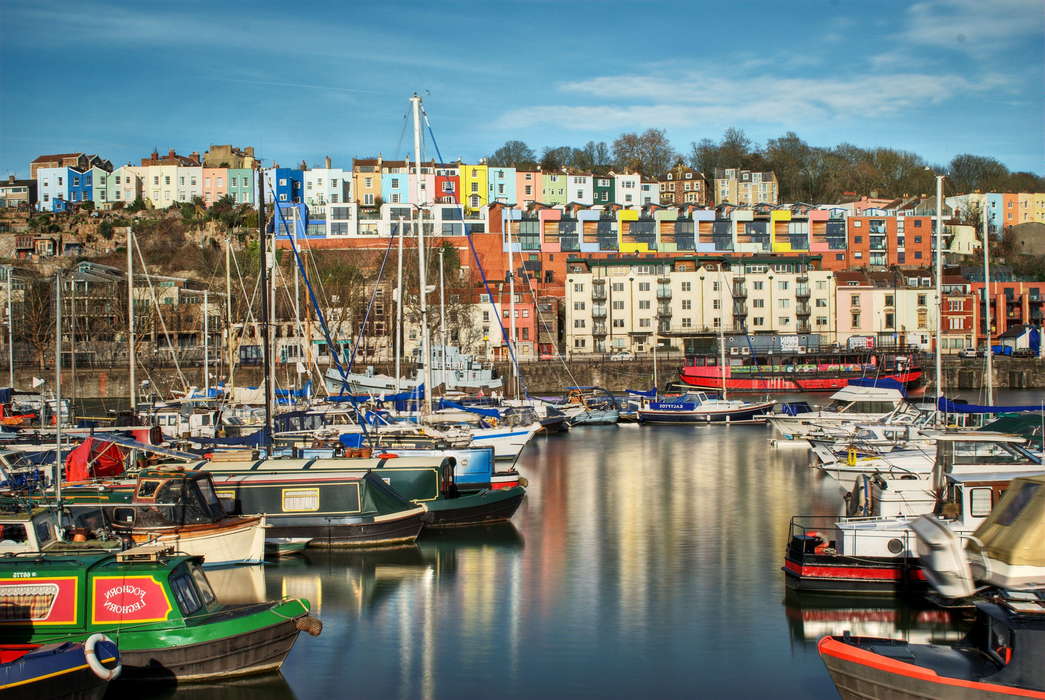 This list of places to see in Bristol will help you organize your itinerary through this interesting English city without missing anything important.

With its rebellious and creative spirit, Bristol has managed to establish itself among the great cities of the United Kingdom with its extensive cultural life, urban art by the best graffiti artists in the world, amazing gastronomic offerings, and the care of its parks and buildings. For example, the more historic ones like the cathedral and the university.

Also, the best way to explore this port city, ranked one of the best in the country for quality of life, is on foot or by bicycle, making it very traveler-friendly.

And, of course, after completing all the interesting city tours for a day or two, we suggest taking a train tour to some of the nearby wonders, such as Bath, Salisbury or the mysterious Stonehenge.

Based on our stay in the city during our trip to Bristol, Bath, Salisbury and Stonehenge, we’ve compiled a list of the top 10 places we want to visit in Bristol. Here we go! 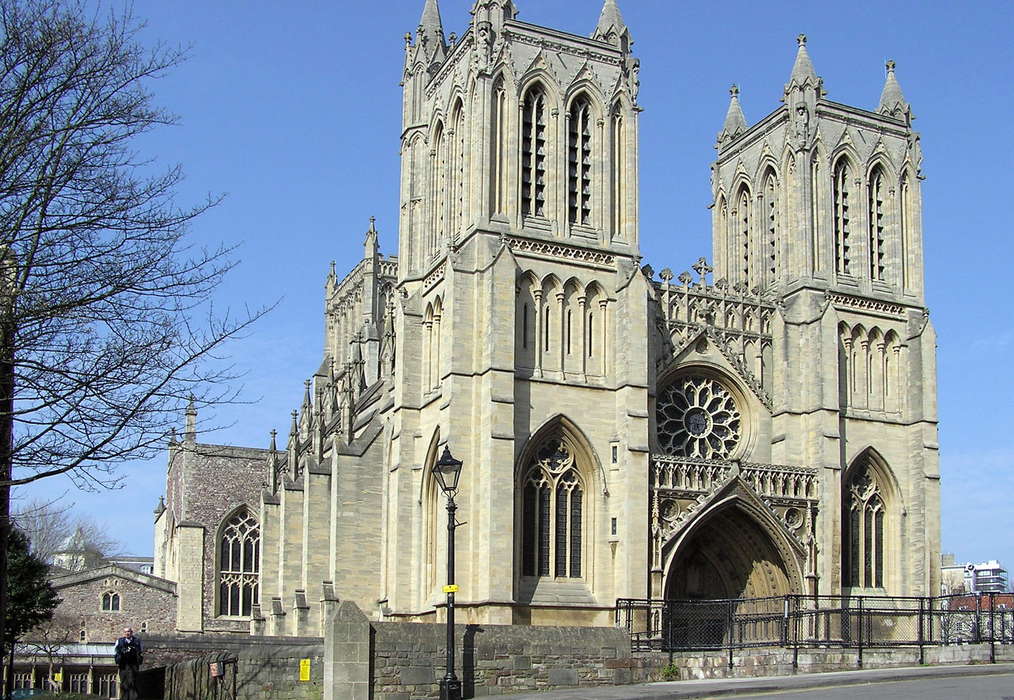 One of the best things about Bristol is to walk around the old city until you find the Cathedral, one of its most important and ancient monuments. Founded in 1140 as the Abbey of St. Augustine, which still contains the chapter hall and the great gate, it was not opened until 1542, when it became Bristol Cathedral.

This church of a very specific Gothic style has the Lady Chapel, the vestry arches of Berkeley Chapel, the choir, and the cloister. These are its most prominent elements. 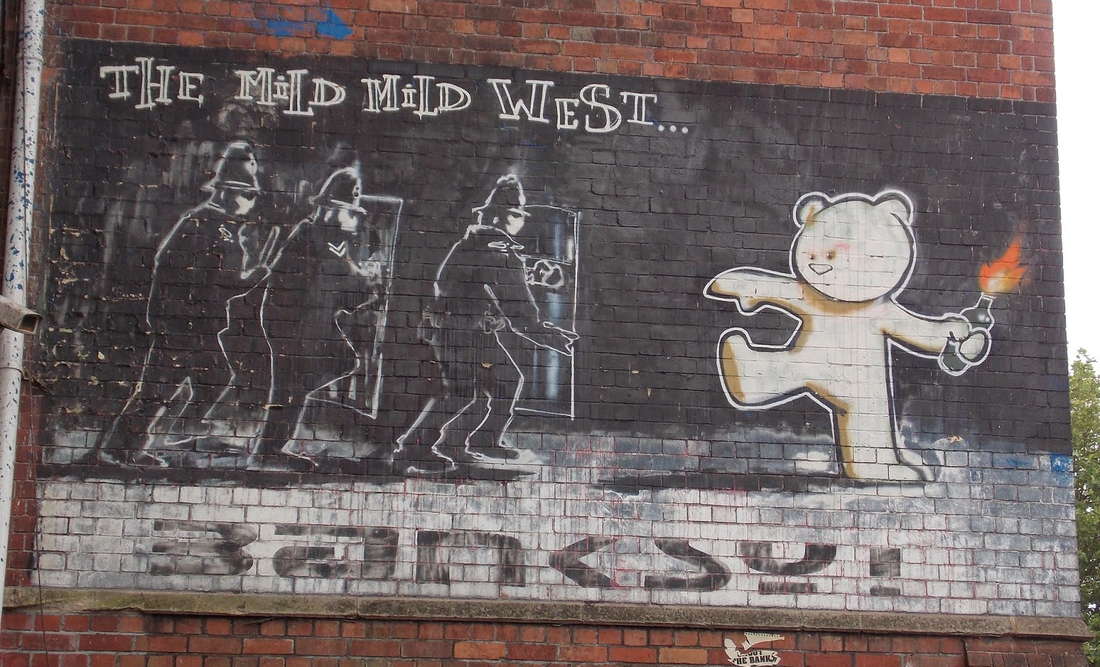 Bristol is known as the street art capital of the world with its biggest hero, Bansky, the most famous and coveted graffiti artist in the world.

Although he is an anonymous artist, it is known that Bansky was born in Bristol. Some of his earliest and most recent works, which are always subject to political and social criticism, are on the streets and buildings of the city.

Among his most famous graffiti seen in Bristol are Mild Mild West, Well Hung Lover and The Girl With Pearl Earring.

To find this mythical artist’s work and the graffiti of others, you can contact the tourist office or book a free guided graffiti tour. 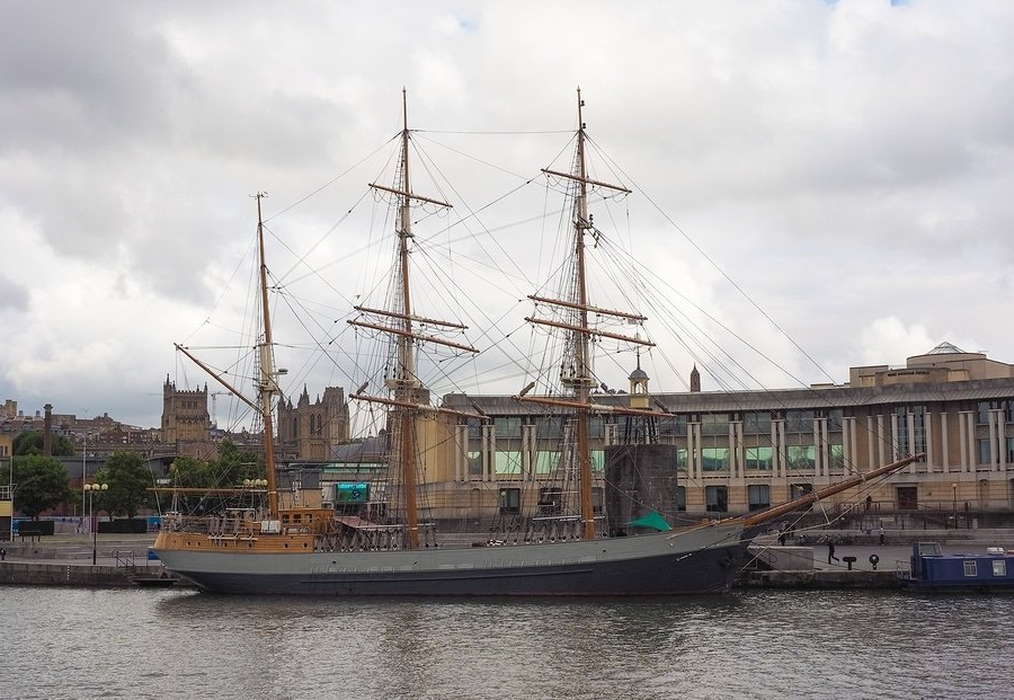 The SS Great Britain, which for 11 years was the largest ship in the world, is another important place to visit in Bristol.

This 1843 ship was the first ironclad ocean liner and the first passenger. It was propelled by a propeller, making it a naval landmark of its time. Advanced in her day, this ship arrived to carry more than 700 passengers to New York City in just 14 days, until it was sold to bring immigrants to Australia.

In later years it was used to carry coal before being abandoned in 1937 in the Falkland Islands.

In 1970 the ship returned to Bristol and after an in-depth restoration became a museum and one of the city’s most visited attractions.

Queen Square, one of the places worth seeing in Bristol 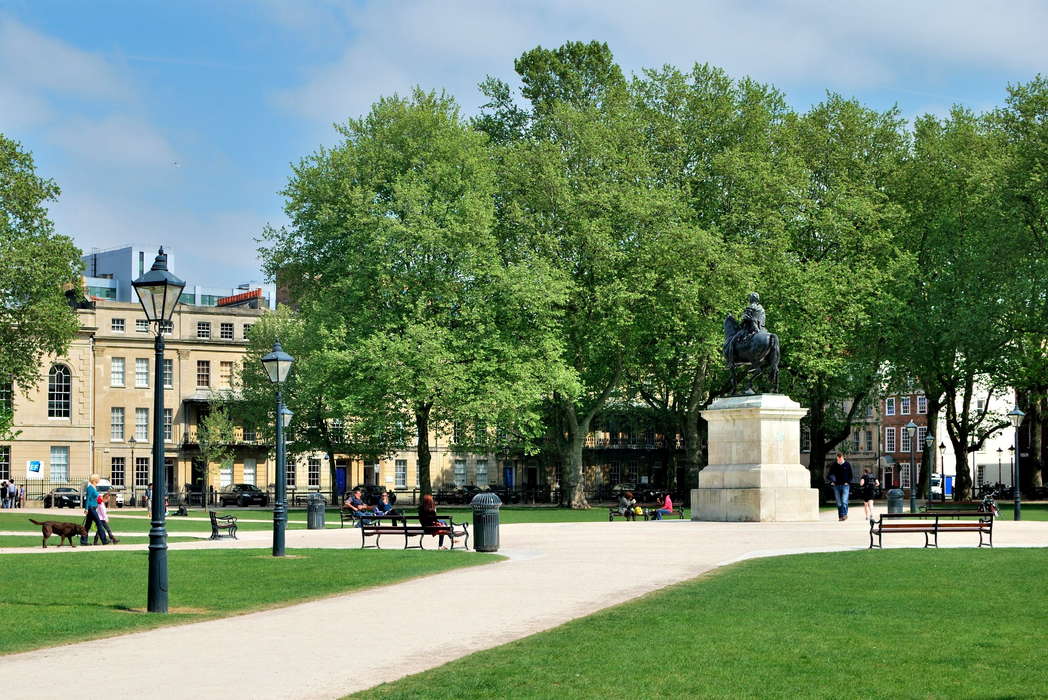 Queen Square, a beautiful square surrounded by Georgian houses, is another of the most beautiful places in Bristol.

This square was an old swamp in the thirteenth century until it was converted into a tree-lined promenade and bowling alley in 1622. It owes its name to Queen Anne, who visited the village in 1702 and since then the town’s wealthy Merchants have settled in this strategic location near the port, building their beautiful homes.

READ
What to see in Slovenia?

In 1831 there was a fire with hundreds of deaths in which more than 100 buildings in the square and surrounding areas, including the town hall, were burned. After a long restoration, Queen Square has become a gathering place for tourists and locals, with concerts and an open-air theater.

A good way to learn the history and curiosities of this square and city is to book a free guided tour of Bristol! 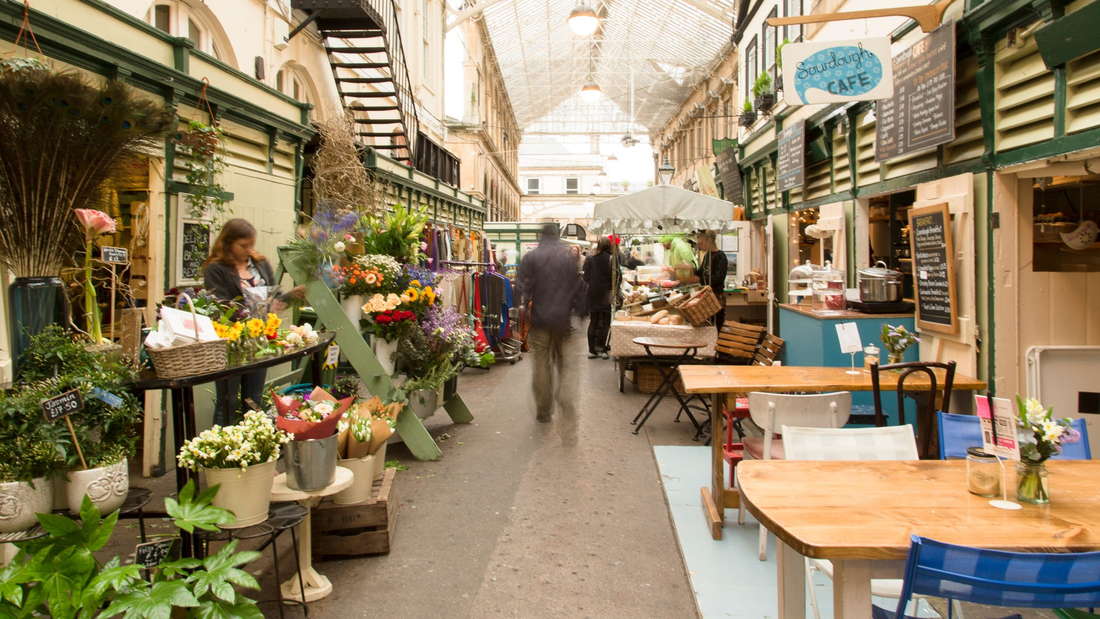 The 1743 St. Nicholas Market, located next to the harbor, is the most famous and oldest market in Bristol. This Georgian-style market, with more than 60 stalls, is suitable for finding souvenirs and shelter from the usual English rain, as well as an extensive offering of international cuisine, with quality products at a good price, including falafel and kebab stalls. 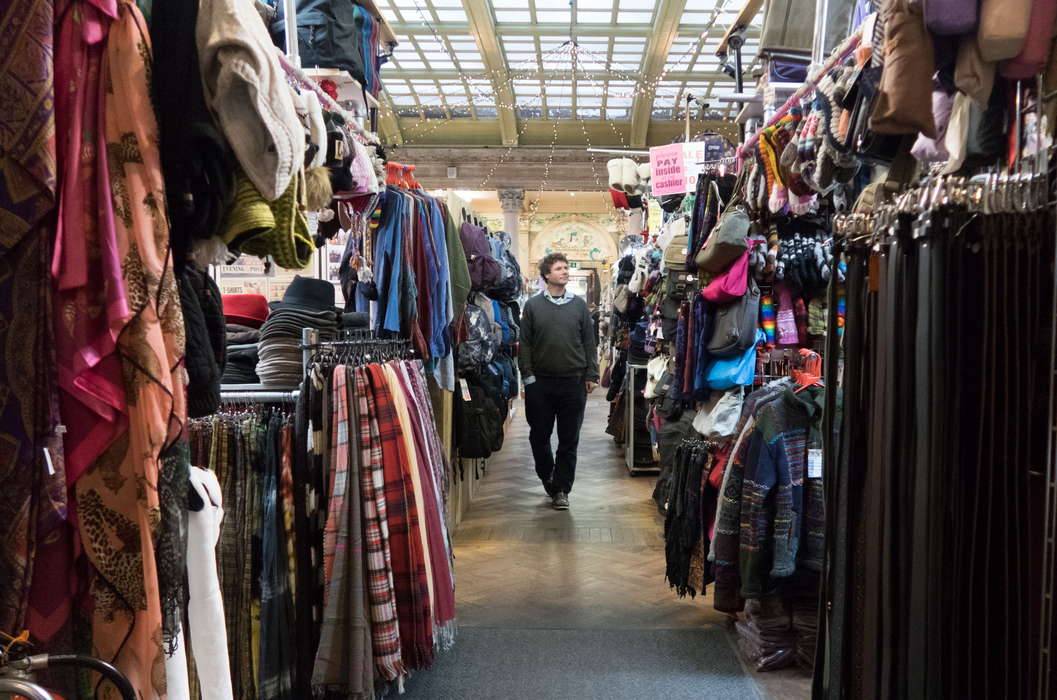 Pedestrian streets adjacent to the market, such as Corn Street and Wine Street, have outdoor markets that can be another place to visit in the city. For example, they sell fresh produce from farmers on Wednesdays, street food on Tuesdays and Fridays, and vegan and healthy food on Mondays.

Our recommended hotel in Bristol 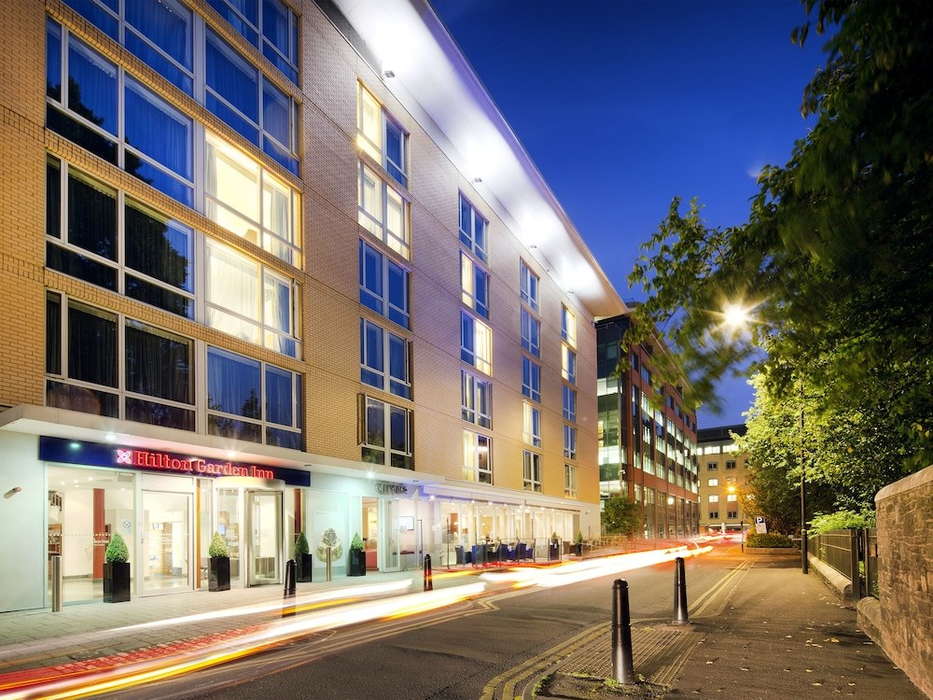 We stayed at the Hilton Garden Inn Bristol City, a 5-minute walk from Temple Meads train station and 15 minutes from downtown. In addition to its great location to visit other southern England wonders by train, the hotel has a friendly staff, 24-hour front desk, full breakfast and one of the best value for money in town. 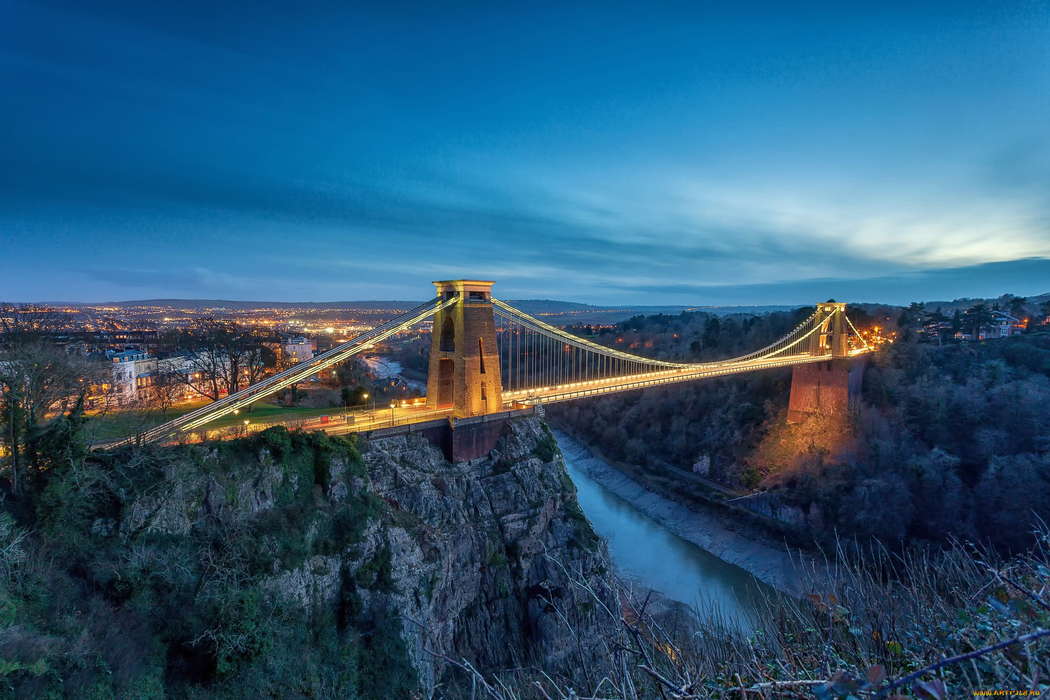 Getting to the Clifton Hanging Bridge after walking through the elegant neighborhood of the same name is another one of the best things about Bristol.

This bridge, over 200 meters long and 75 meters high, was built of stone 150 years ago to link the Clifton neighborhood with Lee Woods, crossing the gorge and the Avon River, and stands out with two huge towers 26 meters high on either side. It is the site of the world’s first bungee jump in 1979.

If you go to Bristol in August, we advise you to come to the International Balloon Festival, the most important balloon festival in Europe, which fills the sky of the city with color. In this case, to have the best view of the bridge with the background balloons, we advise you to go up to the Clifton Observatory. 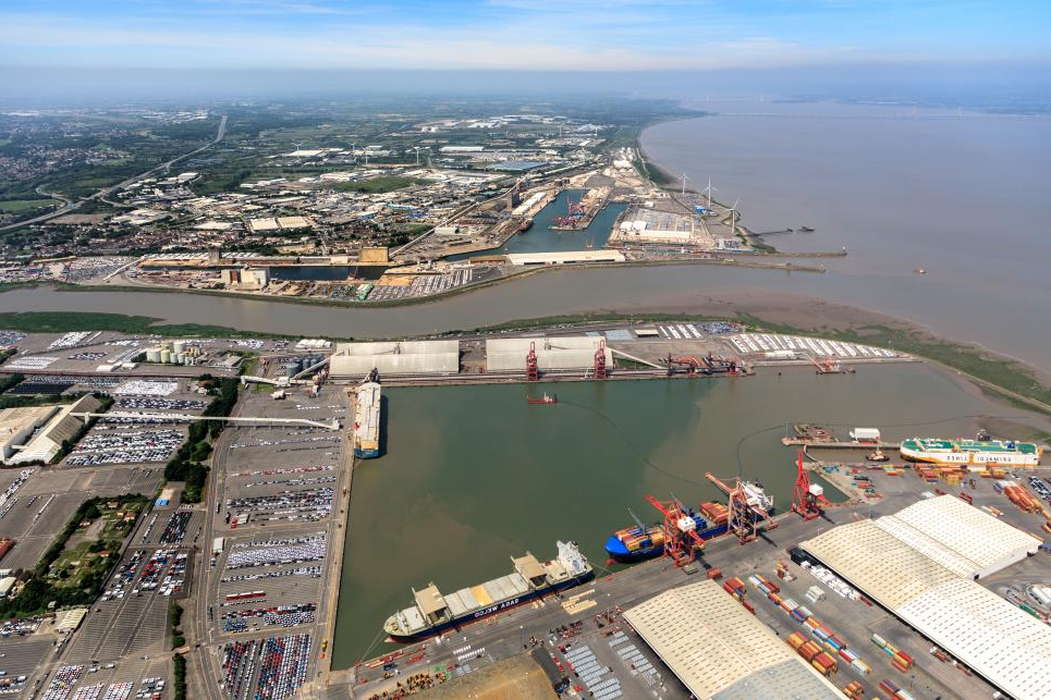 Although Bristol is 15 kilometers from the sea, it has a great port thanks to the navigation of the River Avon, which crosses the city and in the 12th century made the city an important trading port between England and Ireland, although nowadays it is only for recreational use in moving goods outside the city.

One of the best things about Bristol is to walk along the pedestrian harbor promenade, feel the atmosphere on the terraces, see the boats and watch the beautiful colorful houses at the top.

During the tour, in addition to visiting the CC UK, you will pass through Millennium Square with several water games and take a look at the M. Shed Museum, where there is another work by Bansky and where, from its terrace, you have a beautiful view over the entire harbor. To finish the itinerary, you can go to the Underfall Yard, a 19th-century shipyard that has been rebuilt to make it another Bristol landmark. 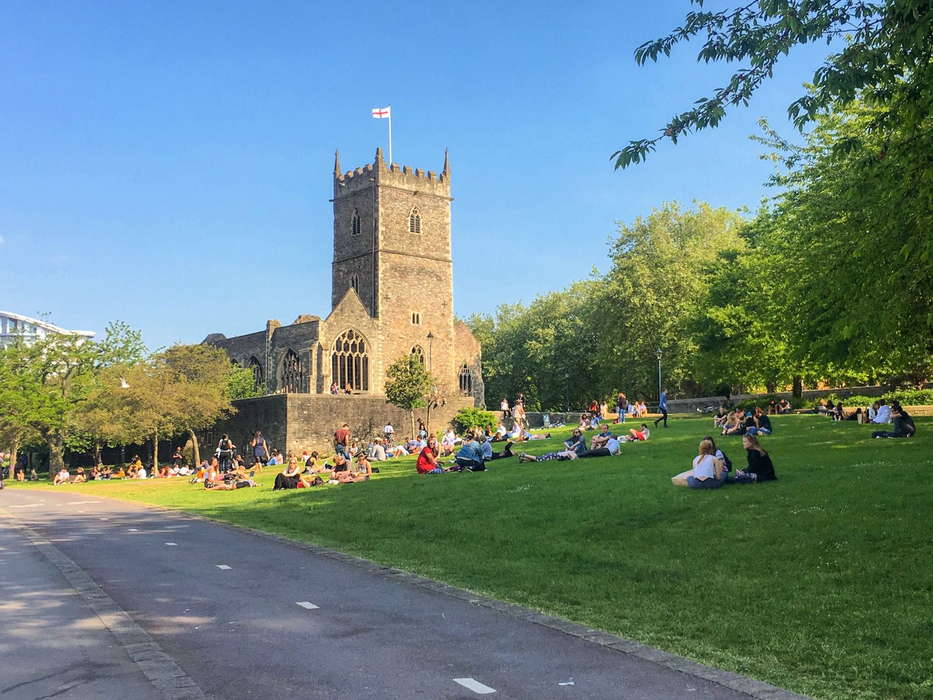 A relaxing walk or picnic on a sunny day on the grass of Castle Park is another of the best things about Bristol. In this big-tree park, located in the city center near the river, you’ll find the beautiful ruined church of St. Mary-le-Port and the remains of Bristol Castle, of which only the vaulted chamber remains.

Other places of interest in Bristol 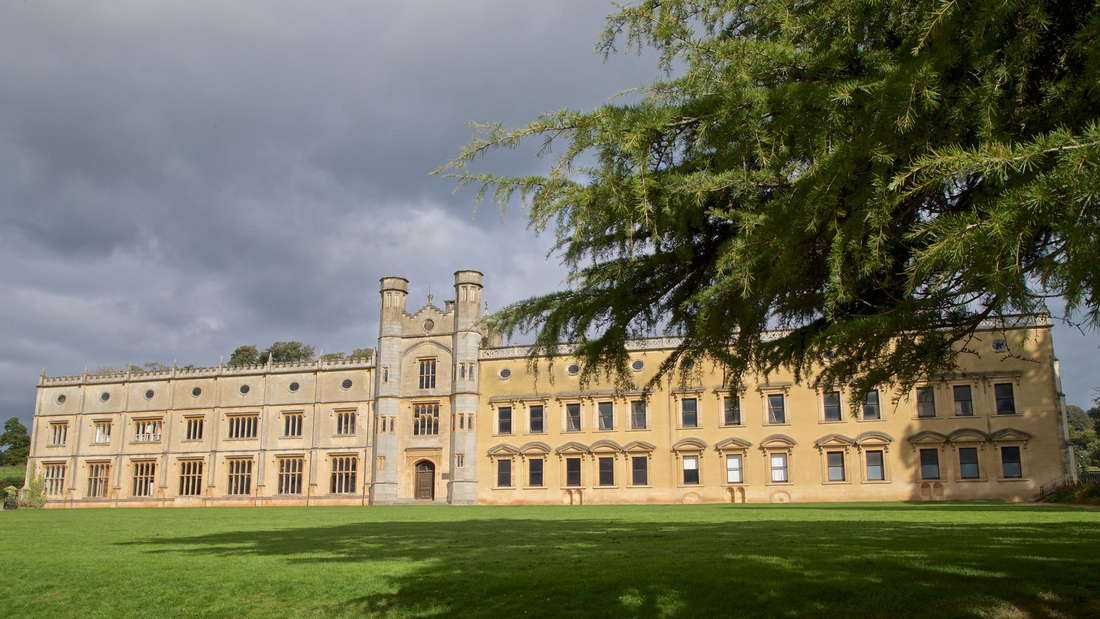 If you have more time, you are advised to go to other places of interest when visiting Bristol:

READ
The most budget resorts in the world 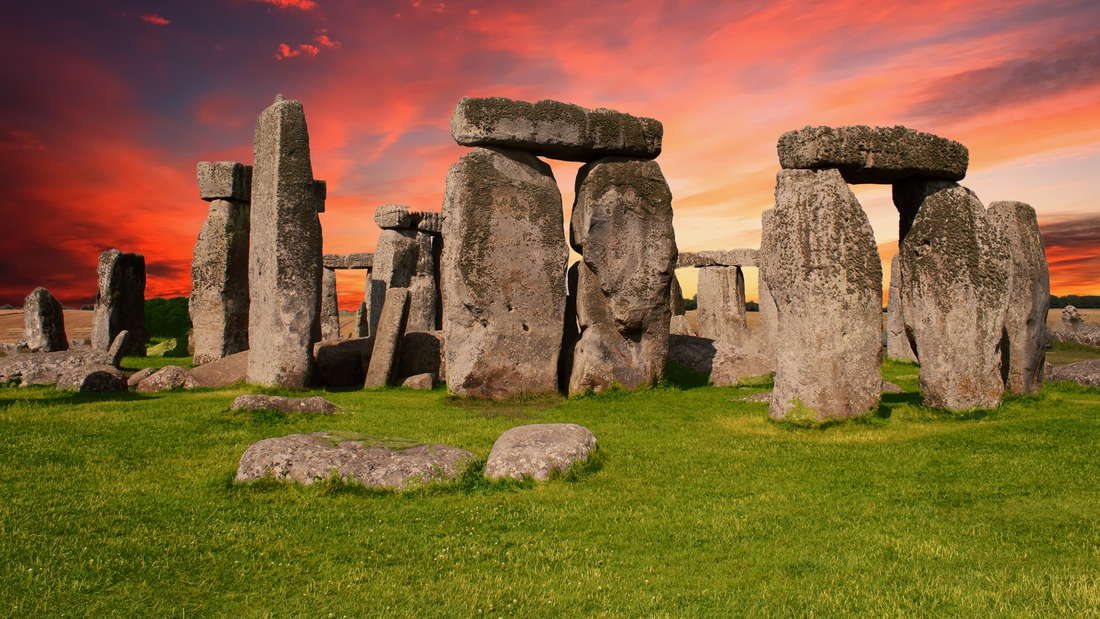 After you’ve finished hiking all the major sites in Bristol, we suggest taking one or more train trips to one of the nearby wonders.

The first suggestion is to visit Salisbury and Stonehenge, the most famous and mysterious megalithic monument in Europe. The best way to get to Stonehenge is to take the train at Temple Meads Station, which takes just over an hour to Salisbury. Once at the station, you can take one of the Stonehenge Tour buses, which will get you there in 30 minutes.

When you visit Stonehenge, you can return to Salisbury to see its beautiful old town and famous cathedral. 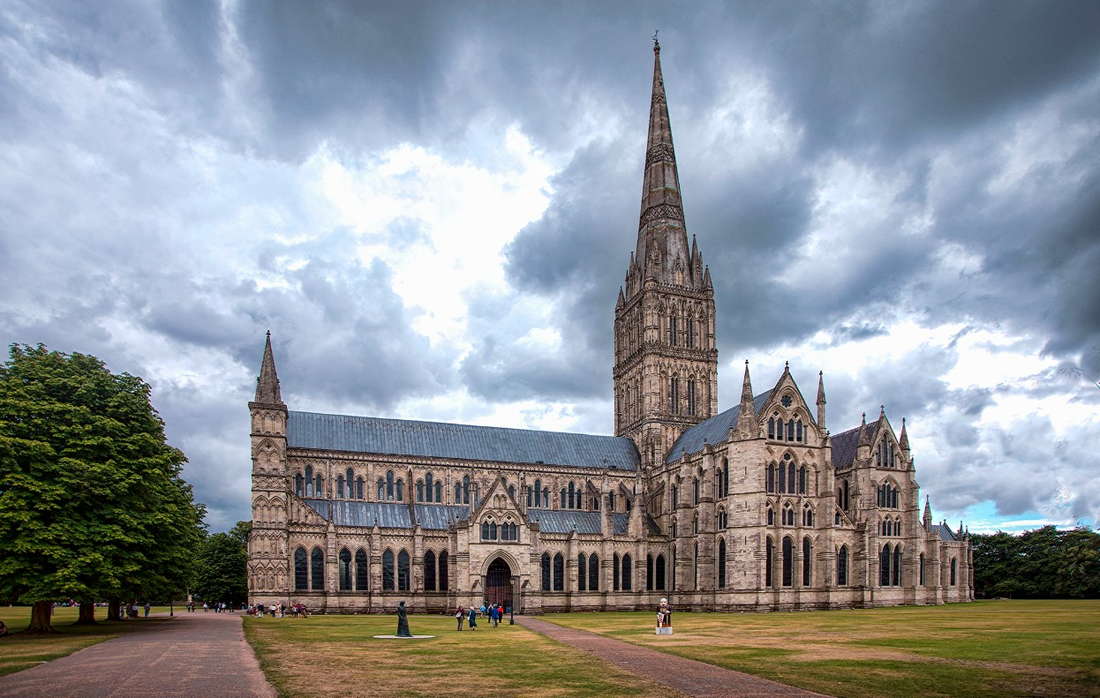 Another trip we recommend from Bristol is a visit to Bath, one of England’s most beautiful cities and a World Heritage Site. To get to Bath, you can take the train to Temple Meads, the journey takes 15 minutes.

Once in town, don’t miss the ancient Roman baths, Paltney Bridge, the Abbey, and follow in the footsteps of writer Jane Austen. 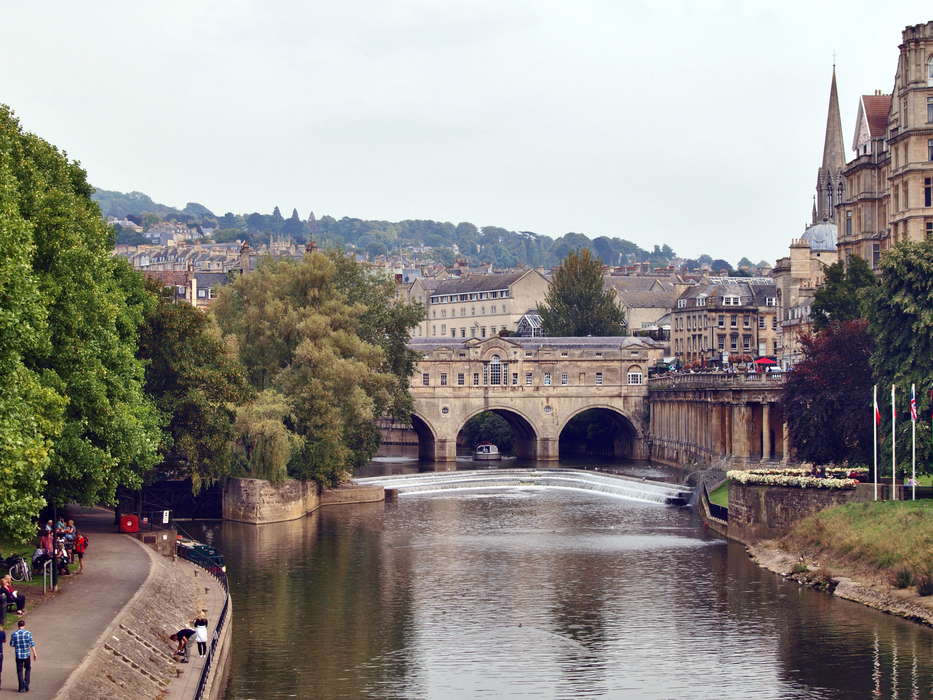 How to get to Bristol

The most common way to get to Bristol is to land a plane at Bristol International Airport, located 12 kilometers from the center. From Bristol Airport you can get to the center on the Airport Flyer Express, which is open 24 hours a day and will take you to Temple Meads Station in half an hour and several stops in the city center.

If you’re away from downtown, you can take a cab, an Uber, or a convenient direct shuttle to your hotel.

Another option is to get to Bristol from London by direct train from Paddington Station in an hour and a half or by bus from Megabus or National Express, which will be cheaper.