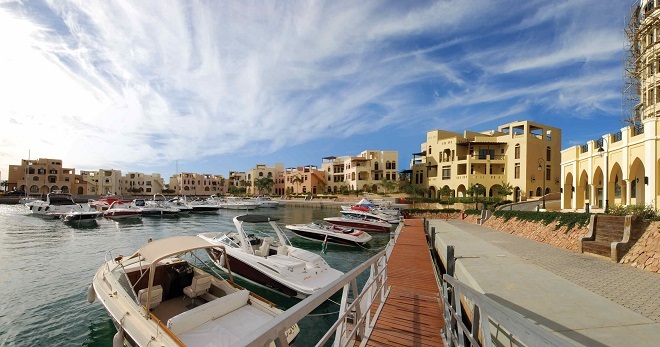 Jordan – a country with a relatively small area and a fairly hot climate. Most of its territory is desert plains. There are few large metropolitan areas, but the Red Sea coast takes an unexpected turn. Here stretches a ring of mountains and hills, protecting it from the scorching heat of the desert, and the sea breeze brings the desired coolness and freshness. This is the location of one of the largest cities in Jordan, Aqaba.

On a map of Jordan, Aqaba is located on the northern part of the Gulf of Aqaba, a part of the Red Sea, close to the border with Israel and Egypt. The city is known for being the only seaport in the country. It specializes in transporting Iraqi oil and phosphates. Despite such scary words, Aqaba is a city in Jordan with good ecology and clean air, although no description or photo does not convey its full beauty. 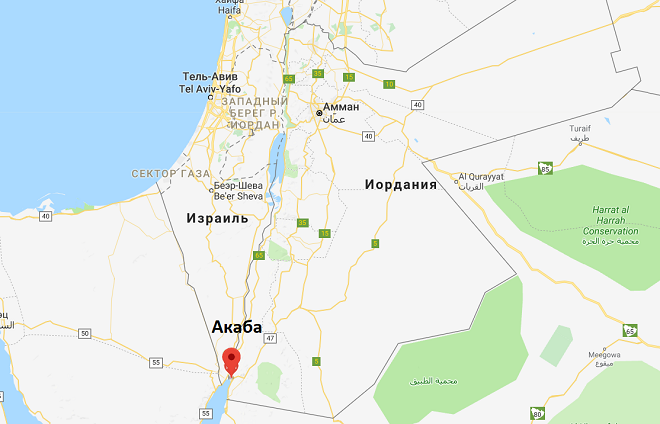 The economy of this settlement is based not only on the port activities, but also on tourism. Aqaba has recently begun to develop rapidly as a young seaside resort in Jordan. It is not surprising, because thanks to the special climatic conditions the water temperature here does not drop below +22 ° C throughout the year. The heat and sweltering heat come to the city in the afternoons and only in the summer, when the thermometer ranges around +32 °C. The average temperature during the winter is +24 °C, which makes it ideal for those who can’t stand the heat.

The population of Aqaba is 140 thousand people. The city has a network of public transportation, but its work is not characterized by comfort and timeliness. The best way to get around Aqaba for tourists is to resort to renting a car or take a cab. 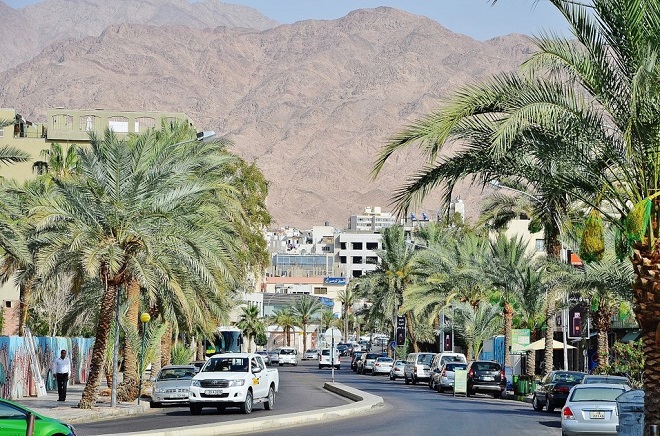 Aqaba is quite an ancient city in Jordan, so there is a lot to see among the local attractions. Among them:

The main mass of tourist leisure here is inextricably linked with the sea. The waters of the Red Sea are clean, as evidenced by the presence of coral colonies. Around the reefs there is always a considerable number of underwater inhabitants, among which are endemics. Such a variety of marine life led to one of the most popular entertainment in Aqaba is diving. Both experienced divers and those who are just trying their hand at scuba diving come here. There are diving lessons for beginners. The result of such lessons will be a certificate of international standard.

Holidays in Aqaba are one of the best in Jordan thanks to the many beaches, which stretch for 27 kilometers along the Red Sea coast. Most of them are paid and fully equipped for the needs of vacationers. But there are some where there is no entrance fee, but then you need to be prepared for a minimum of amenities and large crowds of vacationers.

Aqaba is called the “economic lungs of Jordan” due to the fact that the city is a free economic zone. The duty-free trade has resulted in many varieties of goods being available here for a much lower price. Stores in Aqaba offer a variety of designer items and cosmetics, and the markets offer a great keepsake. Most tourists buy ceramic products, tapestries, various ornaments, oriental spices and sweets. 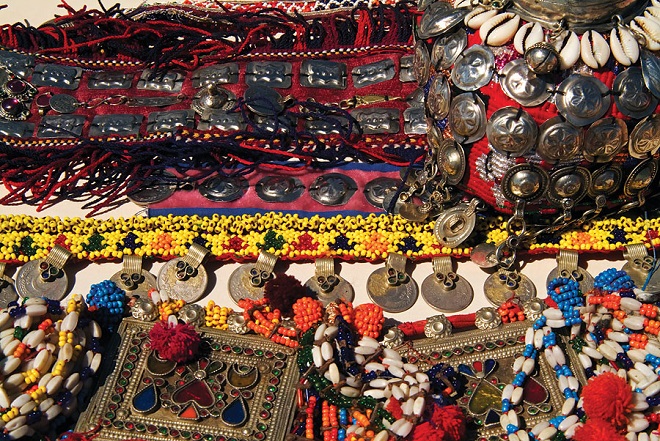 In Aqaba, quite a few hotels are all inclusive, which is quite common in Jordan. Most are located along the Gulf Coast. They offer high quality service, swimming pools and gyms, various spas and private beaches. Characteristically, the prices for rooms directly depend on the side they are located – the rooms where there is more sunlight, are cheaper because they warm up faster. If we talk about specific locations, it is worth noting such hotels as:

If your budget doesn’t allow for expensive apartments, you can stay in hostels in Bedouin style, such as Bedouin Moon Village – Aqaba or Aqaba Adventure Divers Village, which are far from the center. 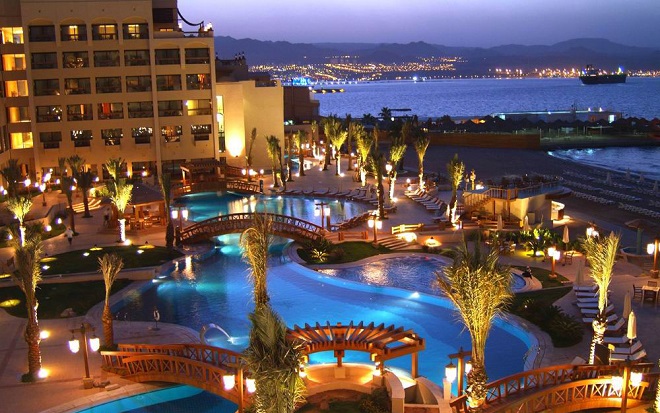 Almost every expensive hotel in Aqaba can boast a restaurant, and sometimes more than one. If hunger strikes you while walking around the city – no matter what, there are many places where you can eat tasty snacks. Among them are Red Sea Grill, Burj Al Hamam and Casalingo. Some of the less expensive places worth mentioning are Buffalo Wings & Rings, Your Home, Diwan The View Rooftop Lounge. 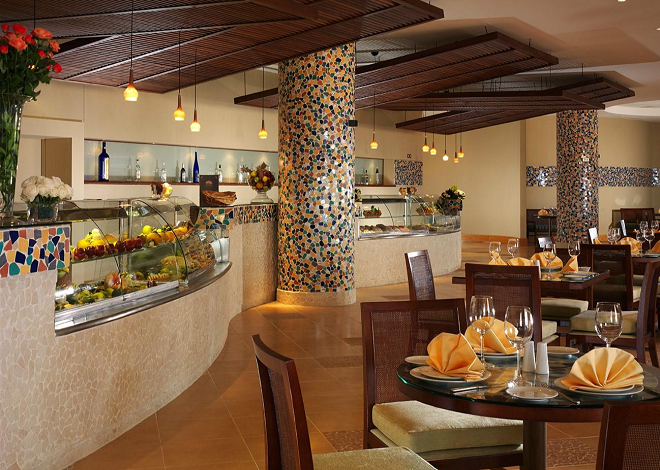 How to get to Aqaba?

There is an international airport in the vicinity of the city, from which buses to Aqaba run regularly, and most hotels offer a free shuttle service. There is no direct flight from Moscow, but you can make a connection in Amman and take Jordanian Airlines. Visa to Aqaba is issued automatically upon arrival and free of charge by the free economic zone, provided that entry is not more than 30 days. However, you must leave the country through one of the checkpoints of the same zone.

Aqaba (العقبة al-ʿAqabah ) is the only port city in Jordan, located on the Gulf of Aqaba in the very south of the country. 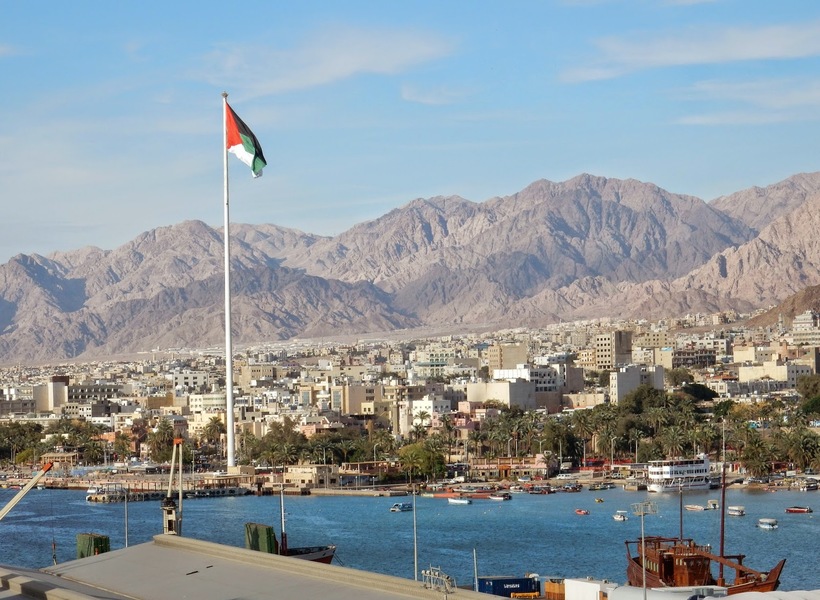 Aqaba has access to the Red Sea, bordering the city of Eilat in Israel. Historically there were plans for a joint international airport and other joint projects, but due to the tense political situation the cooperation was suspended several years ago. Over the past few years, Aqaba has been successfully developed, and the infrastructure and living conditions have improved. Be prepared that the roadmaps may be wrong. By the way, tours to Aqaba are organized from Russia – offers can be picked up, for example, here. 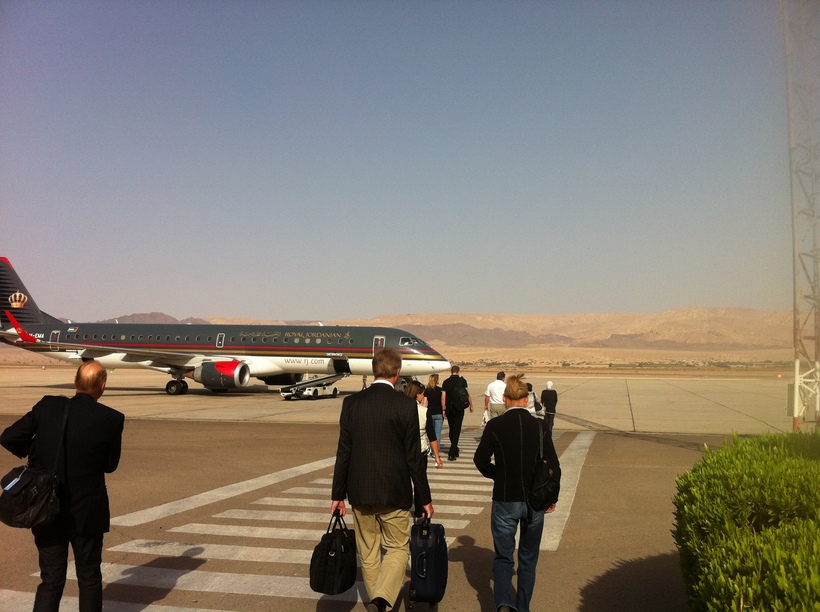 Royal Jordanian (the national airline of Jordan) provides 2 flights a day between Amman and Aqaba, one in the morning and one in the evening. The flight lasts about 1 hour and costs 37 dinars + tax (one way).

The King Hussein International Airport is located north of Aqaba, a 20 minute drive.

Turkish Airlines has 3 flights a day from Aqaba to more than 200 destinations around the world.

Jetairfly.com flies from Brussels to Aqaba twice a week.

You can find the best flight for your dates on various websites, or, for example, here.

The Desert Highway ends in Aqaba and many bus lines run to Amman and other cities. JETT buses leave from Abdali at 7:00, 9:00, 11:00, 14:00, 16:00, and 18:00. The ticket costs JD 8.80. Note that there are several checkpoints along the route, you will need to show your documents to the police. At one of the checkpoints, you may have to get off the bus, take your luggage out of the luggage compartment, and the police will check it on the x-ray machine (for September 2014).

If you are planning to come to Aqaba from Israel (from Tel Aviv, Jerusalem, Be’er Sheva, etc.) by Egged bus on the route to Eilat, you should ask the driver if you can get off at the “Eilot stop to Jordan”, which is the last stop before Eilat, and then walk about a kilometer to the border point. The stop is just after the junction 90 (Jerusalem – Eilat) and 109 (from the junction to the border).

Please note that when you cross the border on the way to Eilat or Aqaba or in the opposite direction, no stamps will be put in your passport. 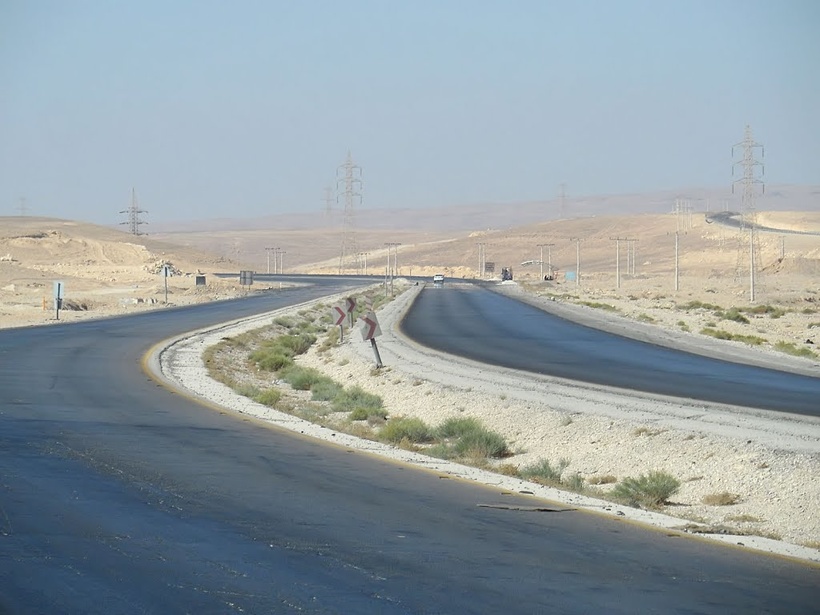 The Desert Highway from Amman to Aqaba is about 350 km. It takes about 4 hours at a moderate speed. Please keep in mind that there are not many gas stations along the highway.

To rent a minibus with a driver to the city of Petra costs 45 JD and the journey takes about 2 hours.

If you are coming from Eilat, Israel, you enter the country through the Yitzhak Rabin border terminal, which is open Sun-Fri from 6:30 am to 8 pm and Fri-Sun from 8 am to 8 pm, except for Yom Kippur holiday and the Muslim New Year. Cab from the center of Eilat to the border costs 30 NIS (March 2012). The entrance fee is 107 NIS (June 2014), and non-cash payment is possible. For citizens of most countries (including the U.S.) a two-week visa to Jordan can be obtained directly at the border. But for some countries the conditions are different, so check beforehand. If you leave Aqaba through this border terminal, you will need to pay an exit tax of 11 JOD (June 2014).

Cabs at the border are owned by a single monopoly company, so they are much more expensive than the usual: 11 JOD (June 2015) for a 15 minute ride to the bus stop in Aqaba. The other way from the center of Aqaba to the border is 4-5 dinars. To save money, you can take one cab in the city and change to another after to the border. It makes sense if your hotel is in the resort area of South Beach. The official cost of a cab from Aqaba to Petra is 50 dinars. Nevertheless, it is possible to negotiate 35 dinars from the bus stop on King Talal Street to the city of Petra.

There is a so-called “mafia” among the cab services, which you may encounter just outside the customs checkpoint. As soon as you see them, they will let you know that it is forbidden to ride together with other people in the same car here (Three men were forced to call three separate cars in December 2011). If you want to save money and share a cab with someone, it is better to get the group together before you leave the customs area and afterwards insist that you are one group.

Also, if he sees you calling your hotel or calling for another car, the cars may stop and forcibly return to Aqaba. He may say, “We’ll shut down their hotel” or “We’ll take away their driver’s license.” To avoid this, call your hotel or someone you know with a private car while you are still in the customs area.

Those who try to walk those 500 meters along the highway will be stopped by the mafia with the help of the military and brought back.

It is possible to negotiate and lower the price, but to do so you have to be persistent and get the support of the border police. Don’t try to set the price too low. Stay polite but determined and explain to the police that it leaves a bad impression on tourists and that you will write to the Ministry of Tourism. This usually makes the “mob” back off, but there are no guarantees.

They can’t lower the prices lower than on the information board. For example, 5 dinars is the lowest price for a ride to the airport, and 11 dinars to Aqaba city center (February 2014). They will not negotiate the price to the city center, they will just name it to you.

In order to eliminate price disputes, a huge billboard was installed with fares for the main destinations, after which the situation has improved. Now the cost of a trip to the center varies from 10 to 15 dinars. Members of the “mafia” will still try to deceive you, they will say that the prices were raised a few days ago and the shield has not had time to update. Insist that these are the prices set by the state and threaten to go to the police. That should calm them down. Generally speaking, a lot of people will try to cheat you out of a few extra dinars wherever you go. 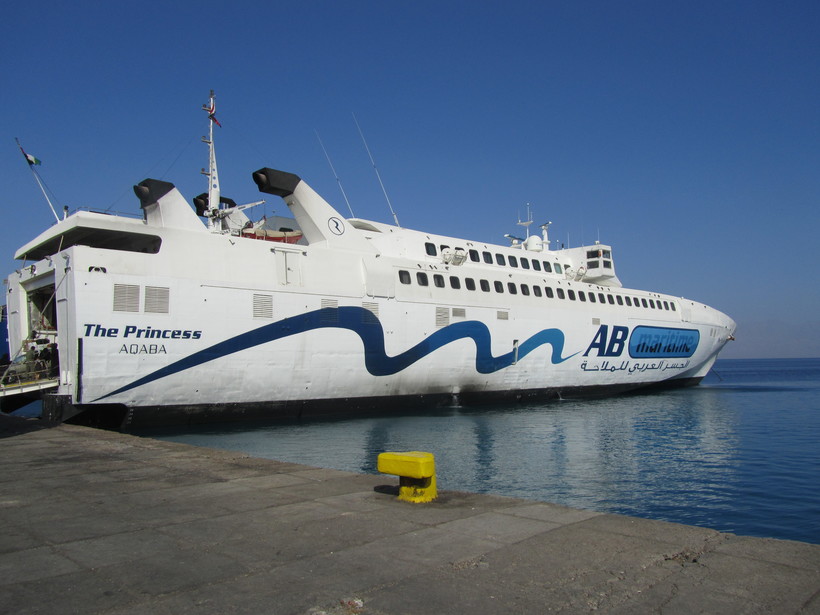 Ferries from Aqaba depart regularly for the Egyptian cities of Taba and Nuweiba on the Sinai, skirting the borders of Israel because of complicated political relations. Taba is the best place for tourists to cross the border (short distance, cheap and independent of weather conditions). There is usually no fee to enter Jordan through Aqaba, as it is a free trade zone.