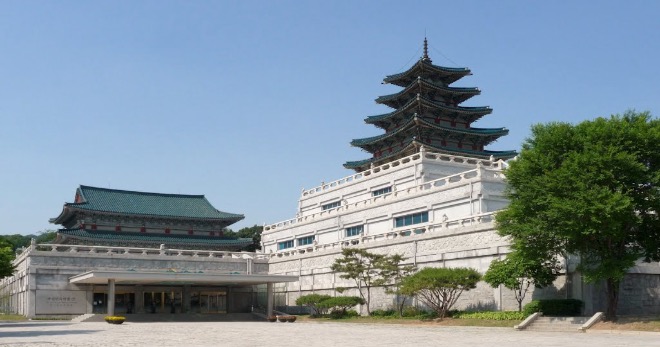 Considered to be the largest museum in Asia, the National Museum of Korea covers an area of 137,200 meters and reaches 43 meters in height. It is one of the main attractions in Seoul and is one of the 20 most popular museums in the world. There are about 220,000 exhibits in all, but only 13,000 can be seen. The rest are sometimes shown at special exhibitions, and the rest of the time they are available only to specialists. In addition to permanent and temporary exhibitions, the museum conducts educational programs for children and adults, and considers the educational direction of its activities a priority. To date, the institution has been visited by a total of more than 20 million people, if you count since it moved into the new building.

It all began in 1909 when Sujeong, the Emperor of Korea, decided to open the Changgyeonggung Palace collection to his subjects. Subsequently, he was joined by the collection of the Japanese Museum, which had been available during the Japanese occupation. All of these exhibits were saved during the war, for this they were taken to the city of Busan, and in 1945 they returned to their rightful place in Seoul. At this point, Korea gained independence and organized its own national museum, which housed these collections. This year is considered the date of the museum’s founding.

Initially the grounds of Gyeongbokgung and Toksugung Palaces were allocated for the museum, after which it moved several more times. The final site was the new building constructed in Yongsan Park. The modern structure is ready for any natural disaster; it is made of fire-resistant concrete and is seismically stable: it is not afraid of earthquakes up to 6 points. The exterior is reminiscent of traditional Korean structures while at the same time being a showcase of modern construction. The museum reopened to the public in 2005. 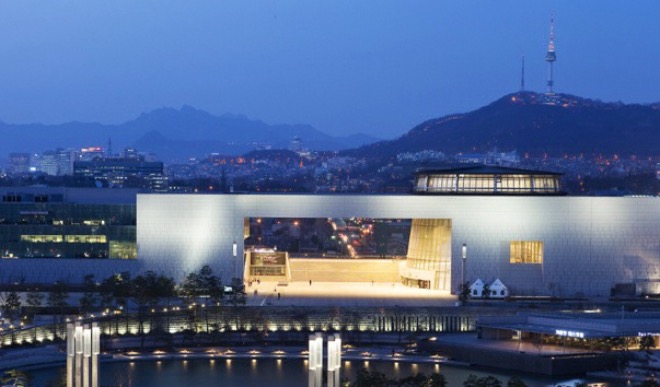 It was decided to divide the entire exposition of the museum into two parts: the left one is directed to the past and the right one to the future. In doing so, the collections are divided by floors:

In addition, on the first floor in a large hall is a full-length real stone pagoda, which was built in the Kore era for the Gyeongjeongsa Monastery. It now occupies all three floors of the museum in height.

What else can be seen at the National Museum of Korea in Seoul?

In addition to the main exhibitions, the museum hosts performances of the national theater of Yong. In front of the building you can admire the play of the dancing bridge of rainbow fountains, and for younger visitors there are separate exhibitions presented in the children’s museum.

After the tour, you can relax in the cafes or restaurants on the grounds, and buy various souvenirs to remember your visit to the museum.

How to get to the National Museum of Korea?

You can get to the museum by car, cab, or by public transportation, which is not a problem in Seoul. For example, you can take the subway to Icheon Station, which is located on Line 4 of Gyeonichunansong. Take buses 502 and 400 to the Yongsan Recreation Park stop, where the National Museum of Korea is located.

National Museum of Korea in Seoul 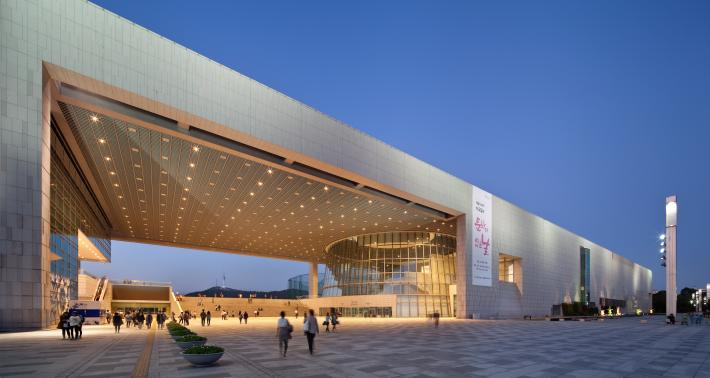 The National Museum of Korea, built on the grounds of the Yeongsan Family Park, is one of the ten most popular museums in the world. Yongsan is located south of the Five Great Palaces of Korea complex and the War Memorial, and north of the Seoul Arts Center and the National Library. This geographic location makes the National Museum a true center of cultural life in the capital, as evidenced by the record attendance figures – the museum receives about 3.5 million visitors a year.

The forerunner of the National Museum of Korea is the first museum, which was founded in 1909 by the last emperor of the Korean Empire, Sunjong. The imperial collection was housed in Changgyeonggung Palace during the Japanese occupation, and after the end of World War II, its collections were used as the basis for exhibitions at the National Museum, which opened in Seoul in 1945. The museum’s first exhibitions were not very extensive, but soon the museum’s collection began to expand by merging with smaller museum institutions in other cities. During the Korean War, the collections were evacuated to Busan and did not return to Seoul until 1954. To accommodate the exhibitions, rooms were allocated in the branch of the museum, the People’s Museum on Mount Namsan. At the same time, Museum Director Kim Chaewon requested the government to allocate appropriate space for the National Museum.

On June 23, 1955, the National Museum moved into the Seokjeojong Building at Toksugung Palace Complex after the war. A typical neoclassical building, Seokjeojojeon Hall was built in 1910 by the British architect John Reginald Harding and was one of the few examples of Western architecture in the country. In 1969, the museum was reorganized and merged with the Toksugun Palace Art Museum. In 1972, the merged institution was officially named the National Museum of Korea and finally found a suitable location for exhibitions. The museum building built on the grounds of Gyeongbokgung Palace Complex was a stylized copy of the wooden structures of the national architecture and had an area of 14,000 square meters. But even here the museum did not stay long because in the mid-1980s, when Seoul was preparing to host the Summer Olympics in 1988, it was decided to renovate the Chunancheon building to house the exhibitions of the National Museum. 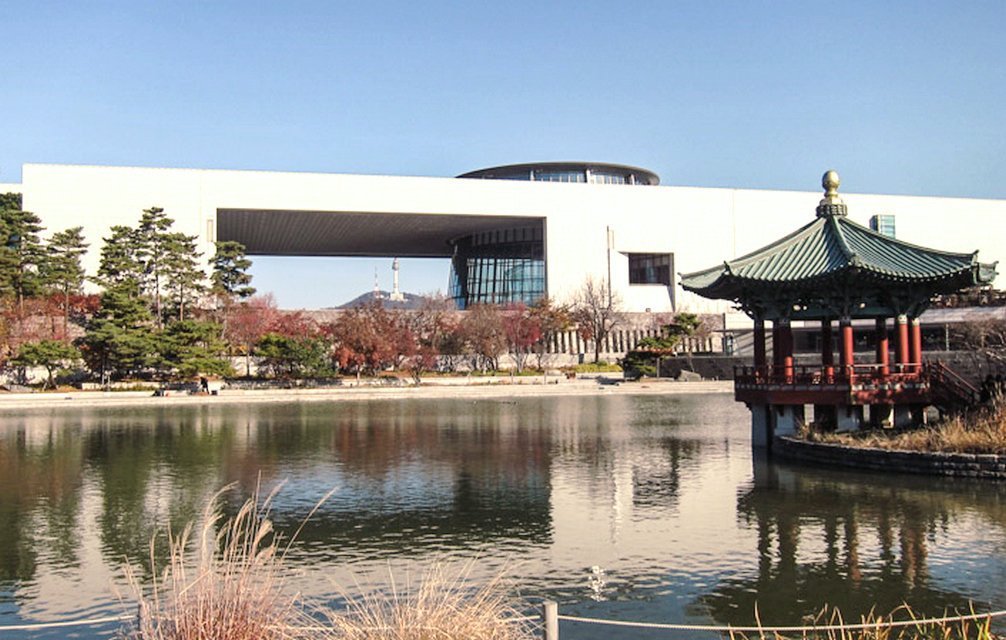 The former home of the Governor General of Korea and later the seat of the Korean government was built in the 1920s by the German architect Georg de Lalande. The renovation of the building, which was called the “South Korean Capitol” for its classical facade, cost the country’s budget 27 billion won. In August 1986, the National Museum of Korea opened its renovated exhibits to the public with about 7,500 items. The museum had 20 exhibition halls equipped with special lighting, air conditioning and dehumidifiers, fire suppression systems, and security alarms. During the Olympics, the museum opened a new exhibition, “The Beauty of Korea,” which was devoted to traditional costumes, jewelry and fabrics. It was immensely popular with foreign tourists and was universally acclaimed.

In the 1990s, the National Museum of Korea began a regular and fruitful collaboration with colleagues around the world. Exhibitions of the museum were held at the Museum of Art in Los Angeles, the Victoria and Albert Museum in London, as well as in museums in France, Spain, Belgium, Japan and other countries. The location of the National Museum in a building that for many Koreans was a reminder of the time of Japanese colonization has caused much controversy and conflict over the years. In 1995, the former governor’s residence was torn down by presidential order, and once again it was time for the National Museum to move its collections. This time to the Social Education Center at Gyeongbokgung Palace, where the museum was to open temporary exhibitions until a new home could be built for it. On October 28, 2005, the new building at Yeongsan Family Park was opened to the public.

READ
Tourism in Turkey: The best places in Cappadocia

The architecture of the building

When the Korean government announced a competition to design a building for the National Museum in the mid-1990s, more than 800 architects from 59 countries responded to the call. The winning architect was Kim Chan-il of a South Korean architectural firm specializing in urban buildings. A plot of land in the former Yeongsan garrison, the longtime home of the U.S. military in South Korea, was allocated for the construction of the museum complex. After the transfer of part of the land to the Korean government, the construction of the Yeongsan Family Park and the National Museum began there. The opening of the museum was delayed because of problems with the relocation of the military helipad, but eventually that issue was resolved as well.

The building of the National Museum, which was built about 10 years, taking into account all the requirements of modern museum technology, has an exhibition area of over 45 thousand square meters, which is almost three times more than the past exhibition space of the museum. The museum appearance is an organic symbiosis of modern design and Korean architectural traditions. The exterior of the museum building resembles an ancient Korean fortification with elongated fortress walls. The large open area as a connecting link is located between two wings of the museum: the left wing, according to the architects’ idea, is the embodiment of the past, and the right wing – of the future. When designing the museum building much attention was paid to the landscape around it, as mountains and water are considered to be symbols of prosperity and stability. In the best tradition of Korean architecture, there are mountains behind the museum and the main facade of the building faces an artificial lake. 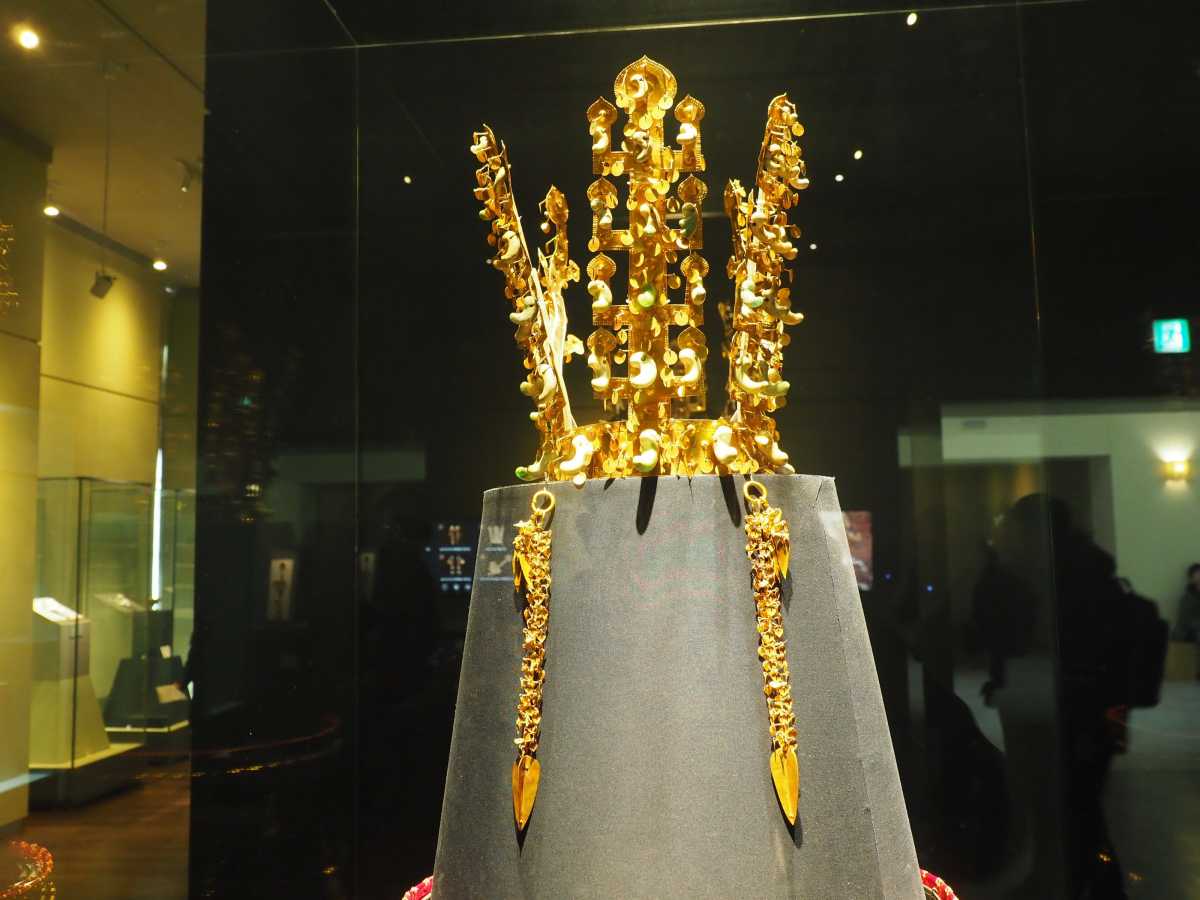 The first floor of the museum is devoted to the ancient and medieval history of Korea, here in chronological order are objects from different eras of this state, beginning with the Paleolithic. Many of the exhibits on these floors were found during excavations in tombs and burial grounds. There is also a very extensive selection of household items, primitive tools and weapons for hunting and decorative items. The medieval period of history is represented by military uniforms, a collection of weapons, a collection of jewelry, among which of great historical and cultural value are the golden crown of a Silla emperor and the silver belt of his wife.

On the second floor, there are exhibitions of the museum patrons’ collections and the gallery with the samples of eastern calligraphy and paintings of different epochs. The exhibition is divided into four rooms: a room with paintings, a room of calligraphy, a room of Buddhist paintings and a room in which the reconstruction of Saranbang room is presented. Such a room was traditional in Korean homes and was intended for studying, writing poetry, and intellectual leisure. The Sarangbang could be called a “men’s study” in which women were not allowed. Gallery of patrons contains more than 1400 exhibits, which are distributed in 11 halls, according to the number of donors. On the third floor of the National Museum are the Sculpture and Decorative Arts Gallery and the Asian Art Gallery, which exhibits about 1 thousand pieces from Southeast Asia, Central Asia, Japan, China and Korea. In the Sculpture and Crafts Gallery many exhibits are dedicated to Buddhism, here you can see statues of Buddha of different sizes and materials, religious items from temples, crockery, gongs, bells and much more. 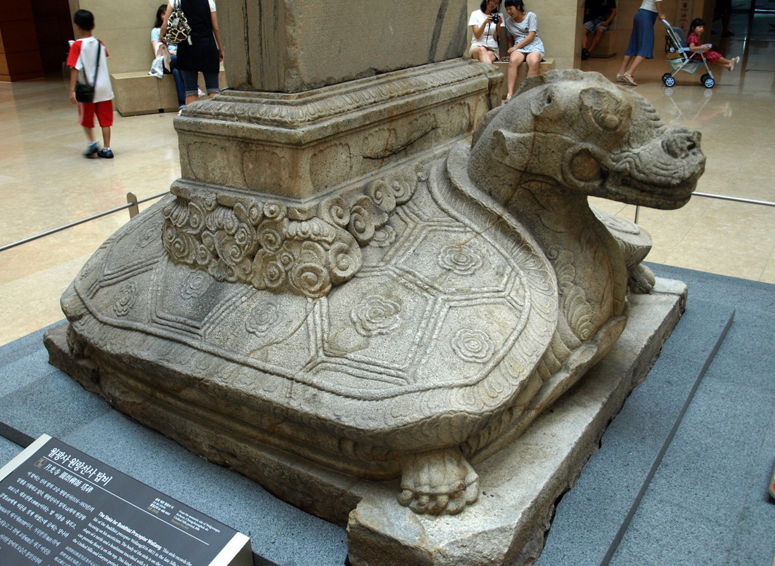 One of the most valuable pieces in the museum’s collection is the statue of the “Pensive Bodhisattva,” which is on display on the third floor. This statuette dates from the 7th century AD and is made of bronze and covered in gilt. In the center of the museum lobby is another exhibit that is on the list of National Treasures of Korea, a 10-story pagoda from Gyeongchangsa Temple. The pagoda, which is as tall as three stories, was formerly located on the grounds of Gyeongbokgung Palace, but it was moved under the roof of the museum building in 2005 to keep it out of the weather. In addition to permanent exhibitions, the National Museum also holds temporary exhibitions in which it presents items from its holdings. Often as part of cultural exchange, the museum hosts exhibitions of various world-renowned museums of the world.