Wiesbaden is located at the southern foot of the Taunus mountain range. The city center is about 5 km from the Rhine. The name “Wisibada” (Wisibada – “meadow spring”) is first mentioned in 829. In 1241 Wiesbaden became an imperial city. In 1866 it became part of Prussia.

Save on a trip to Wiesbaden!

The local springs were already known to the ancient Romans, who built a cure for wounded and sick legionaries here. One of these springs still flows into the thermal pool at the Hotel Nassauer Hof in the center of Wiesbaden, on Kaizer-Friedrich-Platz.

Intensive development of the resort began in the 19th century. Wiesbaden has 27 medicinal springs (most of them have a water temperature of 66 ° C) . The hotter and more powerful spring Kochbrunnen gives out daily to 500 thousand liters of sodium-chloride water, and all springs together – 2 million liters.

The old and new town halls are not far from each other. The old town hall was built in 1609 and rebuilt in 1828, located on Marktstrasse. In front of the building in 1753 installed fountain Lions (Lowenbrunnen), which became a symbol of Wiesbaden.

The new town hall (1884-1888) was built according to the project of architect Hauberisser. During the rebuilding of the town hall in 1950-1951, its facade on Palace Square (Schlossplatz) was redesigned and given a new appearance.

Next to the New Town Hall there is the Market Church (Marktkirche, 1855-1862) with its façade facing the Market Square.

On the Castle Square stands the City Palace (Stadtschloss, 1837-1840), which first belonged to the dukes of Nassau, then it became a royal property, and today is the property of the state. The Hessian Landtag (parliament of the land) has its seat here.

The famous Kurhaus (Kurhausplatz, 1, 1905-1907, architect F. von Tirsch) is located north-east of the Market Square. It is the center of Wiesbaden’s spa life. The powerful portal is decorated with the city’s coat of arms with three lilies and the inscription: “Aquis Mattiacis” (Latin for “springs of the Mattiacs” – a Germanic tribe) . That was the name of the Roman fortress laid out on the site in 11 B.C. In the north wing of the building there is a luxurious casino. Gambling business in Wiesbaden began in 1771. In 1810 the casino was moved to the building of the kursaal. In 1907 by decision of Kaiser Wilhelm II a new one was built on its place. The current building was rebuilt after the war only in 1987.

The casino’s arcade is paneled in cherry wood, decorated with delicate blue tapestries and lit by sparkling crystal chandeliers. The very table at which F.M. Dostoevsky played is preserved here. In memory of him, one of the halls is named after him. There is a memorial plaque on the wall of the building. The bust of the writer is installed in the park surrounding the kursaal under a 400-year-old tree, which he could see. F.M. Dostoevsky gambled in Wiesbaden, and then, allegedly, it was in the local hotel “Nassauer Hof” (then simply “Nassau”) that he made the first drafts for his novel “The Gambler”, hoping to pay off his debts with an honorarium.

The square in front of the kursaal is bounded on both sides by colonnades. The southern Theaterkolonnade in front of the theater building was created in 1839 (rebuilt in 1938). The Brunnenkolonnade, the longest in Europe, is decorated with a pavilion that discharges water from the Kochbrunnen thermal spring.

Not far from the kursaal is the Hessian State Theater (Hessisches Staatstheater), built in 1892-1894.

Every year in May the town hosts the International Music, Ballet and Drama Festival.

Neroberg rises to the north of the city by a funicular railway (closed in winter), which can be climbed to the top. In the years 1848-1855 on the mountain Philip Hoffmann built the five-domed Russian Orthodox Church. It follows one of the Moscow churches, and is the burial vault of the Grand Duchess and Duchess of Nassau Elisabeth Michailovna (1826-1845), daughter of Grand Duke Mikhail Pavlovitch and Grand Duchess Helena Pavlovna. In 1844 she married Duke Adolph Wilhelm, but a year later she died in childbirth. From the pavilion (Aussichtstempel) on the mountain one can enjoy a spectacular panorama of Wiesbaden and the Rhine Valley.

The Schloss Biebrich, which was built in four stages from 1699 to 1744, can be seen in the southern part of the city, near the Rhine promenade.

The museum offers an art gallery, a nature department and a collection of antiquities from the Principality of Nassau.

Wiesbaden is beautiful in the snow in winter and has a wonderful Christmas market.

The Südfriedhof Cemetery contains the grave of the famous German fighter pilot of World War I – the Red Baron (Manfred von Richthofen) . 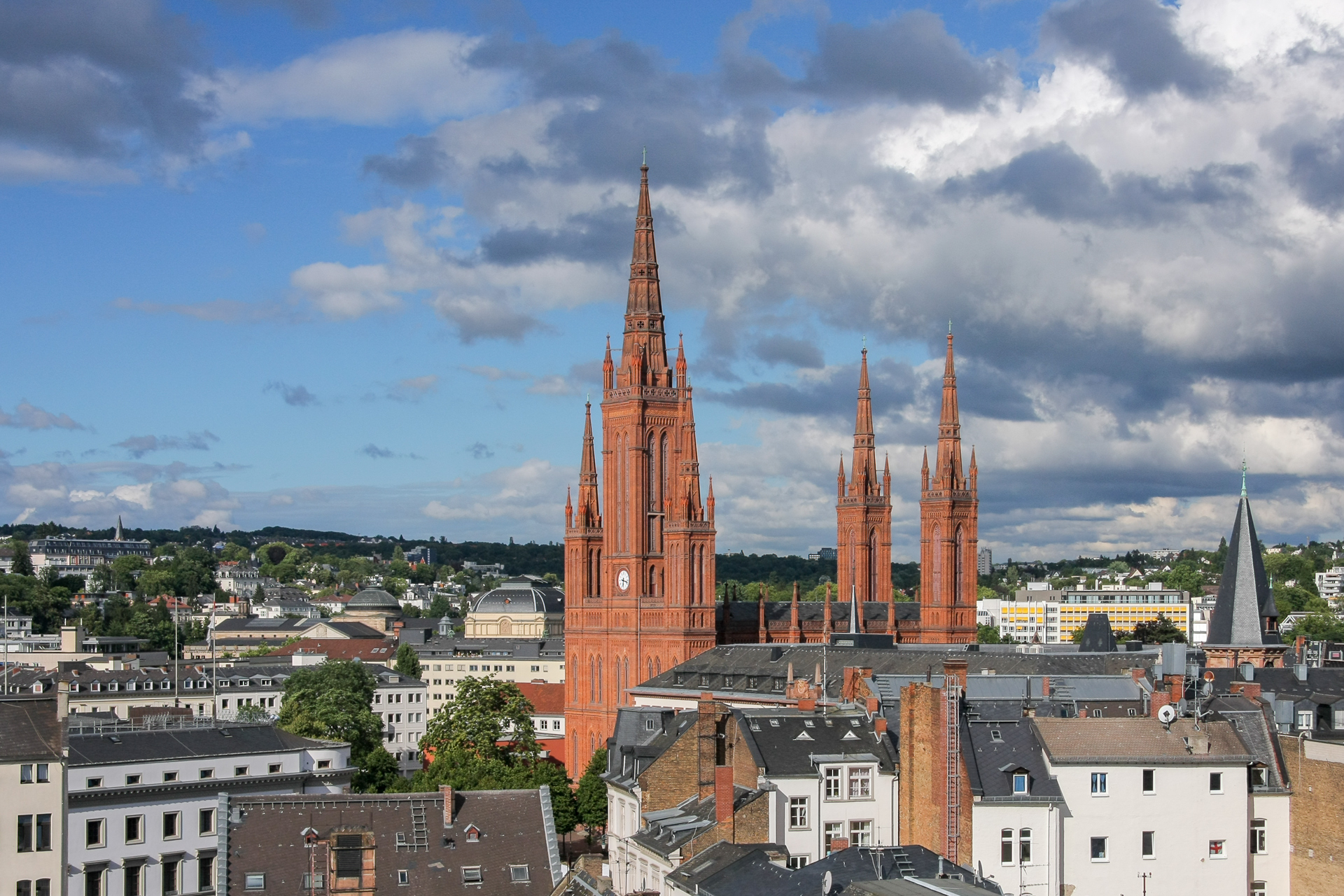 Wiesbaden (Wiesbaden) is the capital of the federal state of Hessen (Hessen). It is one of the most beautiful cities in Germany, located on the banks of the Romantic Rhine. In 2015, Wiesbaden was recognized as one of the 15 richest cities in the country.

Wiesbaden is also one of the oldest balneological spas in Europe. Its name from German means “meadow baths”. The point is that there are hot and cold thermal springs here, which were discovered back in Ancient Roman times. People from all over the world come here for treatment and recovery. In 1814 Goethe spent his time at the resort, and in 1860 – Fyodor Dostoyevsky. 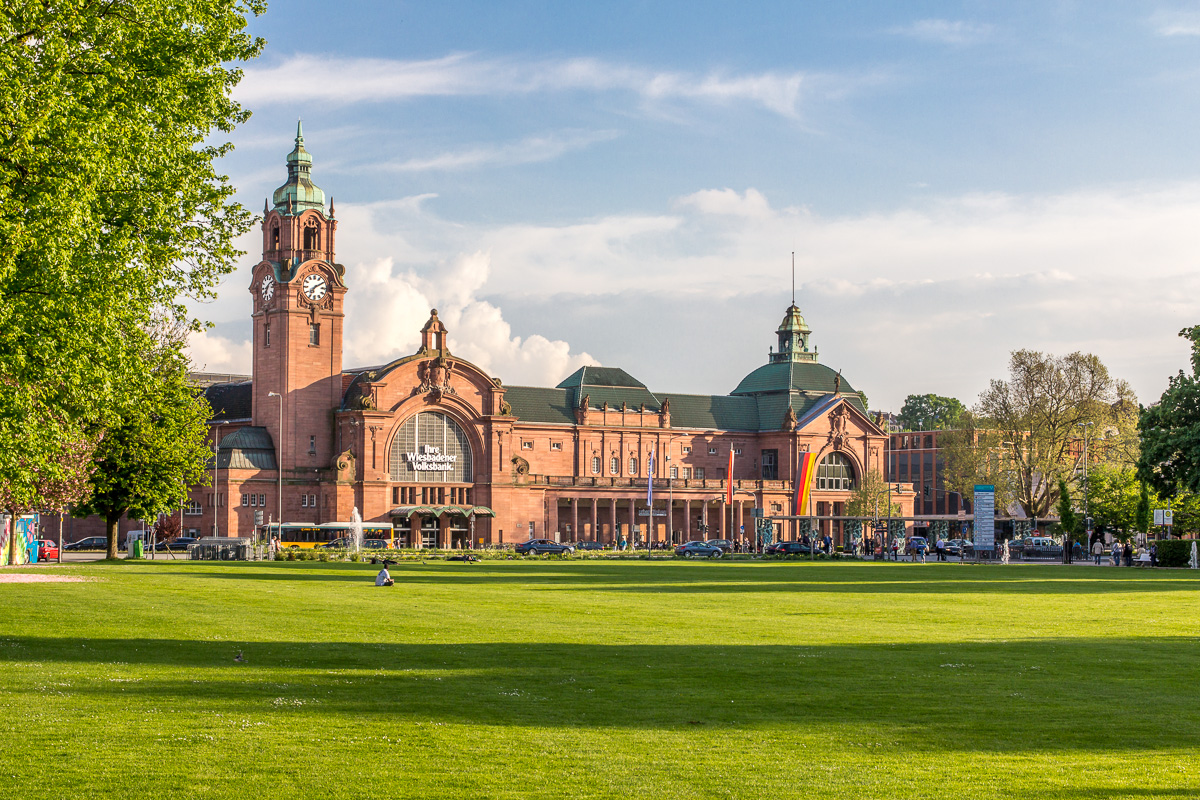 Wiesbaden is rich not only in thermal springs, but also in historical and cultural attractions. It offers tourists lively shopping streets, green parks, beautiful Gothic churches and ancient buildings. The following places and sites are highly recommended:

Schlossplatz (Palace Square) – this is where you should begin your introduction to the city. The area around the square has interesting sights such as the New Town Hall, the Market Fountain, the City Palace of Duke Wilhelm von Nassau, the Protestant church Marktkirche in neo-Gothic style and the Old Town Hall, which is the oldest building in the city.

Mount Neroberg, named after the Roman Emperor Nero, is located in the northern part of Wiesbaden. You can get to the top of the mountain by cable car. At the top of the Neroberg there is the Orthodox Church of St. Elisabeth and next to it is one of the oldest vineyards in this fertile region.

The Kochbrunnen Spring on Kranzplatz is the most famous spring in Wiesbaden. It is said that the water from the spring has healing powers. However, it is very salty. The sign says that it is recommended to drink no more than 1 liter a day. But few people manage to take even a few sips.

The Kurhaus is a monumental neoclassical building that houses a casino. The interior is striking with its rich decoration, marble floors and elegant sculptures. It was in this casino during his vacation in Wiesbaden that Fyodor Dostoyevsky lost all his savings. The cost of admission to the casino is 2.50 euros.

Schloss Biebrich, located on the banks of the Rhine. This is the residence of the Duke of Nassau built in the early 18th century in the Baroque style.

Museum Wiesbaden , which specializes in paintings, installations and sculptures. The Wiesbaden Museum, which specializes in paintings and installations, has a large collection of modern and early modern art including the Duchy of Nassau’s collection. The ticket price for adults is 5 euros, for students 3 euros. Children up to 18 years old can visit the museum for free.

READ
Where to go in Kaliningrad - 47 best places for tourists

The Leichtweißhöhle on the outskirts of Wiesbaden is named after the poacher Heinrich Anton Leichtweis who lived here between 1778 and 1791.

The church of St. Bonifatius (Kirche St. Bonifatius) is the largest and oldest church in the city. It was built in the first half of XIX c in neo-Gothic style and is decorated with two identical towers, 68 m high.

Solmsschlösschen Villa, built by Prince Albert zu Solms-Braunfels in the late 19th century. It is decorated by corner towers, bay windows and a half-timbered façade.

The Kurpark, created in 1852 in the style of an English landscape garden. 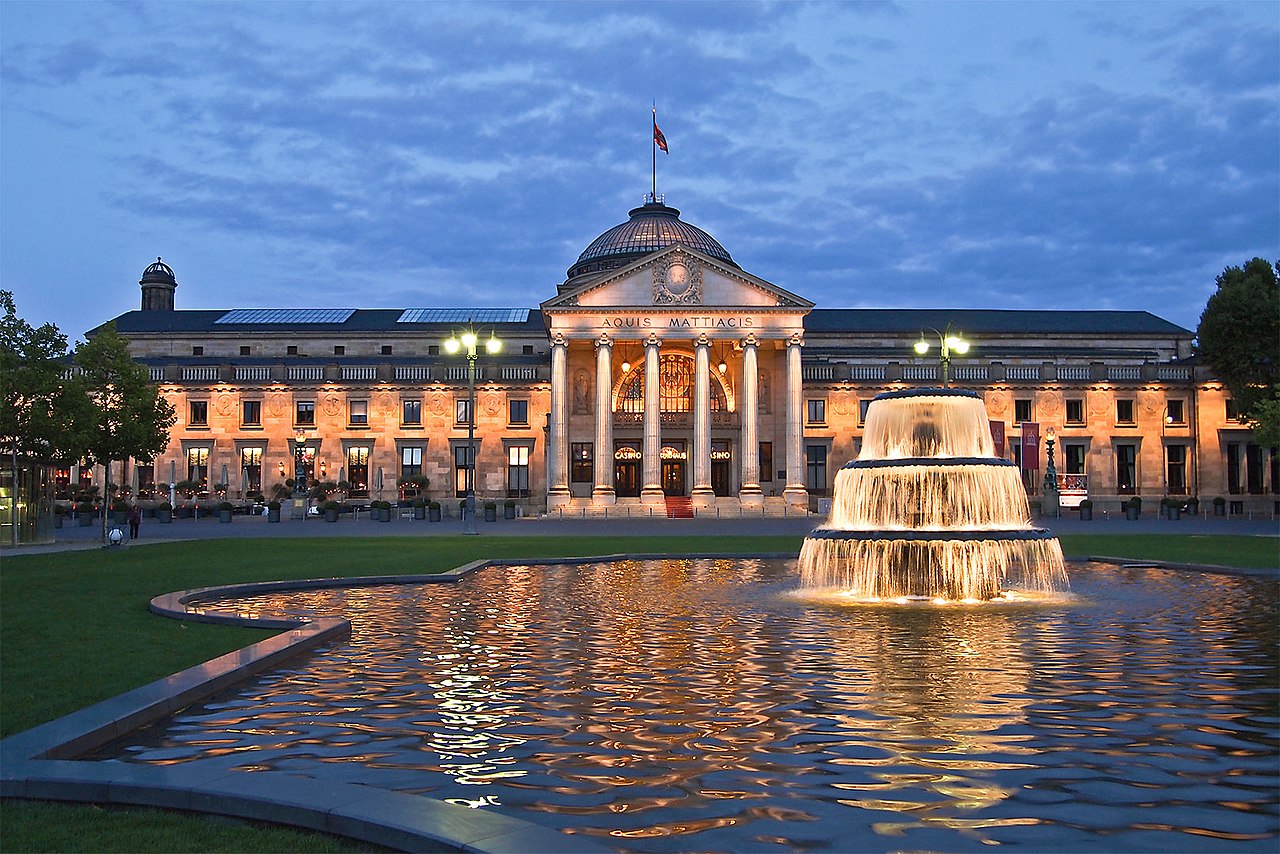 Kurhaus Wiesbaden with one of two cascading fountains on Bowling Green in the evening, Germany (Photo above© Pedelecs / commons.wikimedia.org / License CC-BY-SA-3.0)

Top 7 things to do in Wiesbaden

Where and what to eat and drink

A large number of good restaurants and cafes are concentrated on the street Godgasse. Among the best gastronomic establishments of the city are:

Cafe Aurum (Godgasse 16) , where the dishes of Italian cuisine are served. It is recommended to order a pizza cooked in a stone oven. Prices for main dishes start at 12 euros and pizzas at 7 euros.

READ
The 14 best sights of Heraklion - descriptions and photos

Harput (Wellritzstrasse 9) – popular among tourists and locals Turkish restaurant located in the heart of the Turkish quarter of Wiesbaden. Great bread and shish kebab are highly recommended. The main dishes cost from 12 euros.

Have a drink and spend a good evening in the Irish pub Irish Pub (Michelsberg 15), located in an outwardly unremarkable cellar. Here you can not only order a good beer and spirits, but also listen to a nice live music and sing karaoke.

Watch the video at the link below:

Instead of hotels you can book an apartment (cheaper on average by 1.5-2 times) on AirBnB.com, a very convenient worldwide and well-known service for apartment rentals with a 2100-ruble bonus upon registration