What to eat in Taormina, Italy: 10 typical dishes

In addition to important cultural and artistic beauties, Taormina is also famous for its delicacies . Its cuisine, is a combination of Greek, Arabic and Norman culture, a combination that has given life to dishes with a unique flavor.

It is one of the pillars of Sicilian culinary culture , and the fish used to prepare it is considered “noble” because of its distant and ancient origin: the Phoenicians, the Greeks and even the Romans prepared their dishes based on this exquisite fish. 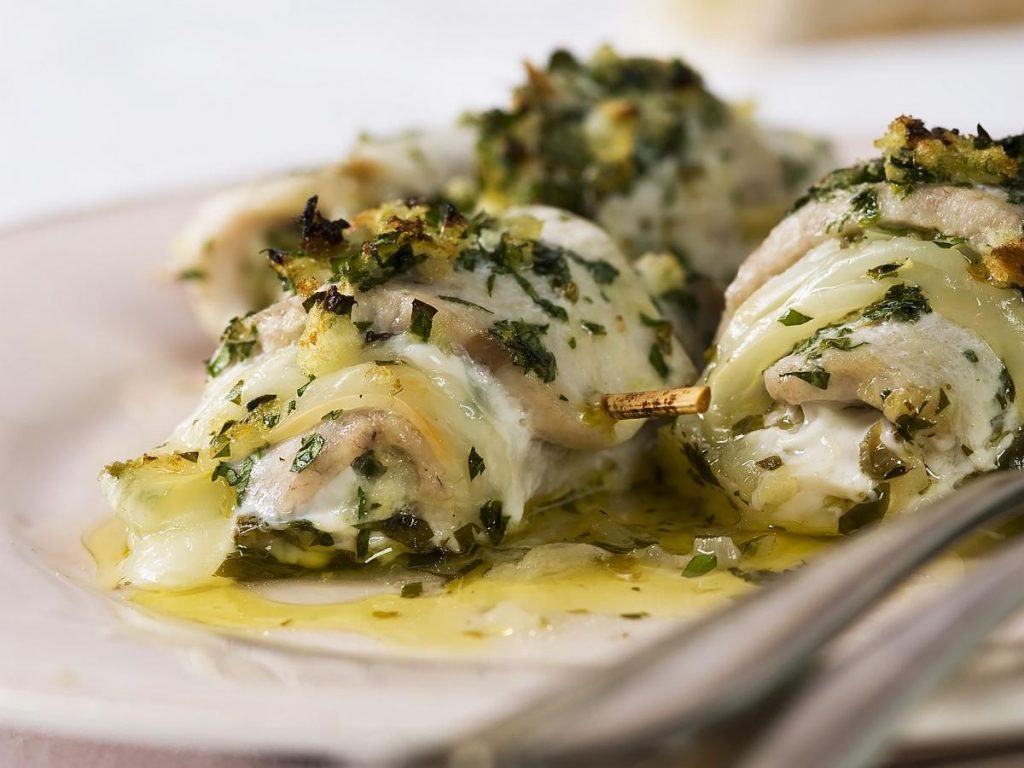 A favorite gastronomic dish of Italians, it has a strong connection to Taormina and the Catania area. It is a dish based on pasta (pasta) dressed with tomato sauce, to which fried eggplant, ricotta lettuce and fresh basil are subsequently added . Apparently this dish was named after the famous playwright of Catania, Nino Martoglio, who, compared it to the great masterpiece of the composer Vincenzo Bellini. 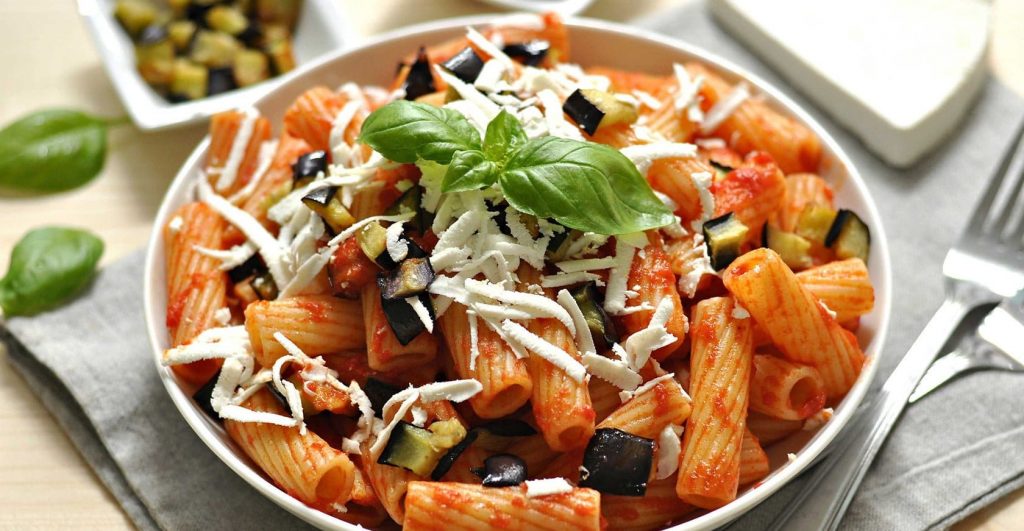 A dish known for its sophistication and uniqueness, it is one of the cornerstones of Sicilian cuisine . Not everyone knows that it gets its name from the main ingredient. Originally, it was the delicious fish capone; however, over the years, “meager” cuisine has replaced it with simple ingredients. Today it’s eggplant and other vegetables. After roasting the eggplants, tomato mixture cooked with onions and celery is added, and then everything is mixed with other ingredients: olives, capers, salt, pepper, vinegar and sugar.

READ
Benaulim, India - a quiet place for a winter vacation 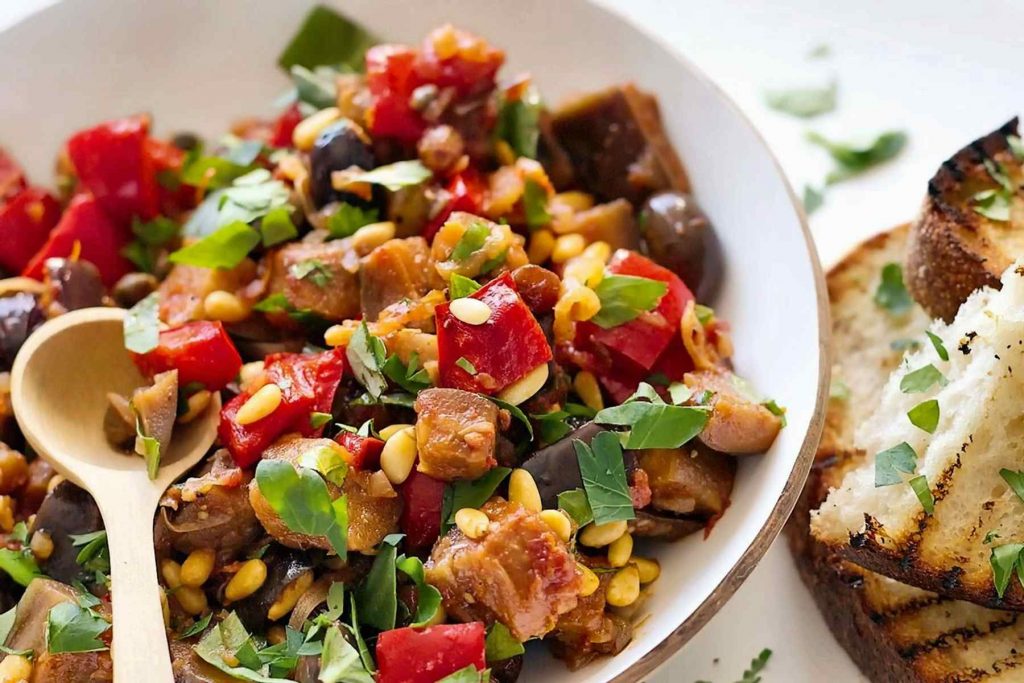 Cuzzole is nothing but fried bread crumbs sprinkled with sugar or salt. In ancient times, Sicilian housewives made bread at home for the whole family, every week according to an ancient and traditional recipe. Leftover pieces were used to make these simple sweets. Many families still make them. These Cuzzole can be found in the best restaurants and at various village festivals.

The world’s most famous fried rice ball is a popular dish not to be missed. For its popularity, it has been included in the list of traditional Italian foods, under the official name of “rice arancini”. As for its origin, not many people know that there is a lexical diatribe between the western and eastern sides of the island: while in Palermo arancina is female, in the area of Catania arancino is male. The dish is of Arabic origin (the Arabs introduced rice in Sicily), the stuffed meat sauce and breading are of Norman origin. Today, the filling of this fried rice ball can be varied with salmon, ham, and even pistachios. 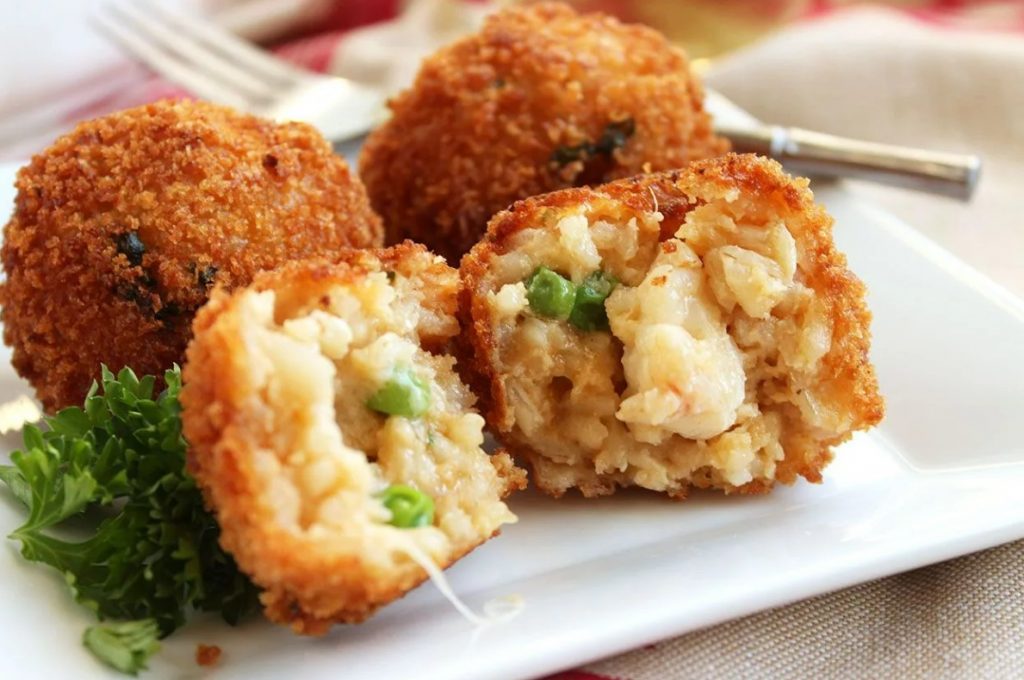 A traditional Sicilian dessert : a waffle crispy tube with a filling. This dessert was born in the territory of Caltanisetta and made famous in Palermo, which has perfected the recipe together with the pastry chefs of Messina, who came up with a version with dark ricotta and chocolate cream. You’ll find cannoli everywhere! 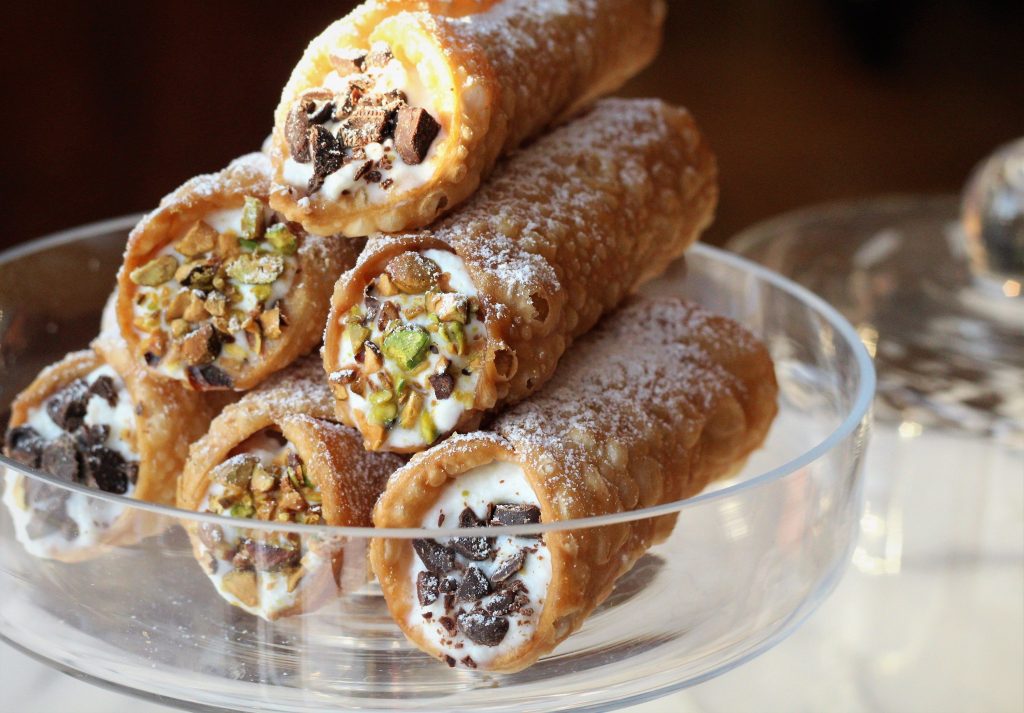 7 – Brioche with ice cream or granita

You can’t help but try it : it’s not a simple brioche cu tuppu, a name that comes from a shape that resembles the traditional chignon worn by Sicilian women in ancient times, which was called tuppo. It is a soft, oven-baked sweet with a unique flavor that should definitely be enjoyed with ice cream or, even better, with granita (a Sicilian dessert, which is a pounded fruit ice with sugar) . Sicilians, in summer, eat ice cream scones for breakfast. 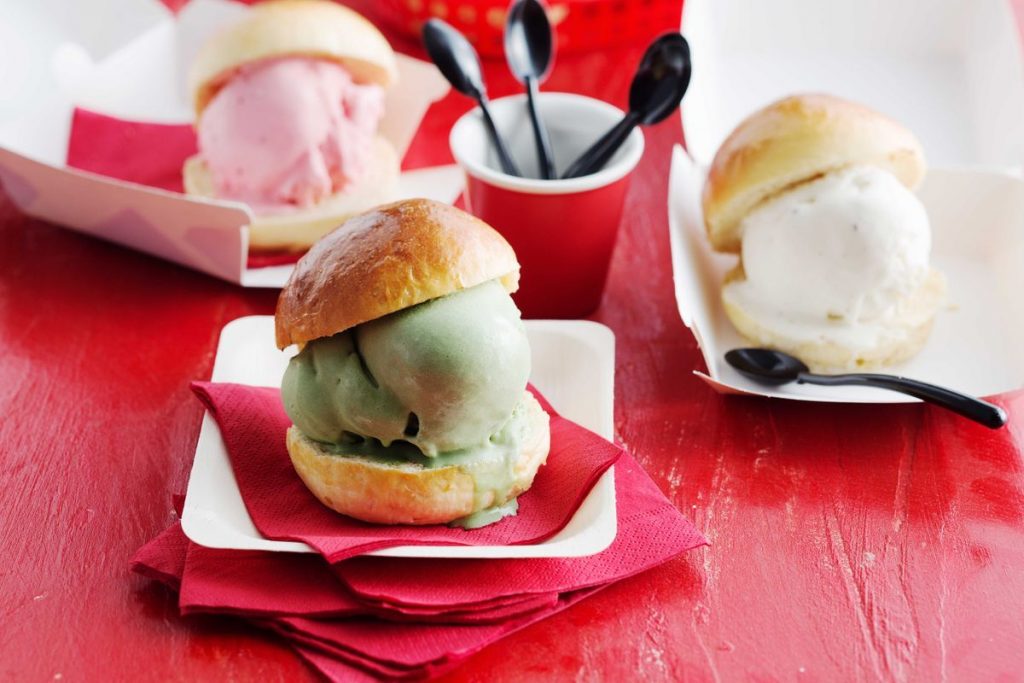 7 – Brioche with ice cream or granita

“Paste chi sardi” is a unique delicacy of Sicilian cuisine. This hearty pasta (pasta) dish is recommended to eat between March and September, when fresh sardines are found and when wild fennel, the main ingredient after sardines, can easily be found among the fields. According to legend, it was invented by an Arab-born cook in the service of General Eufemio da Messina, who needed to feed his troops in a military campaign around Syracuse. He used fish (sardines) or the humblest gifts of the earth, such as pine nuts and fennel that grew spontaneously in the fields. 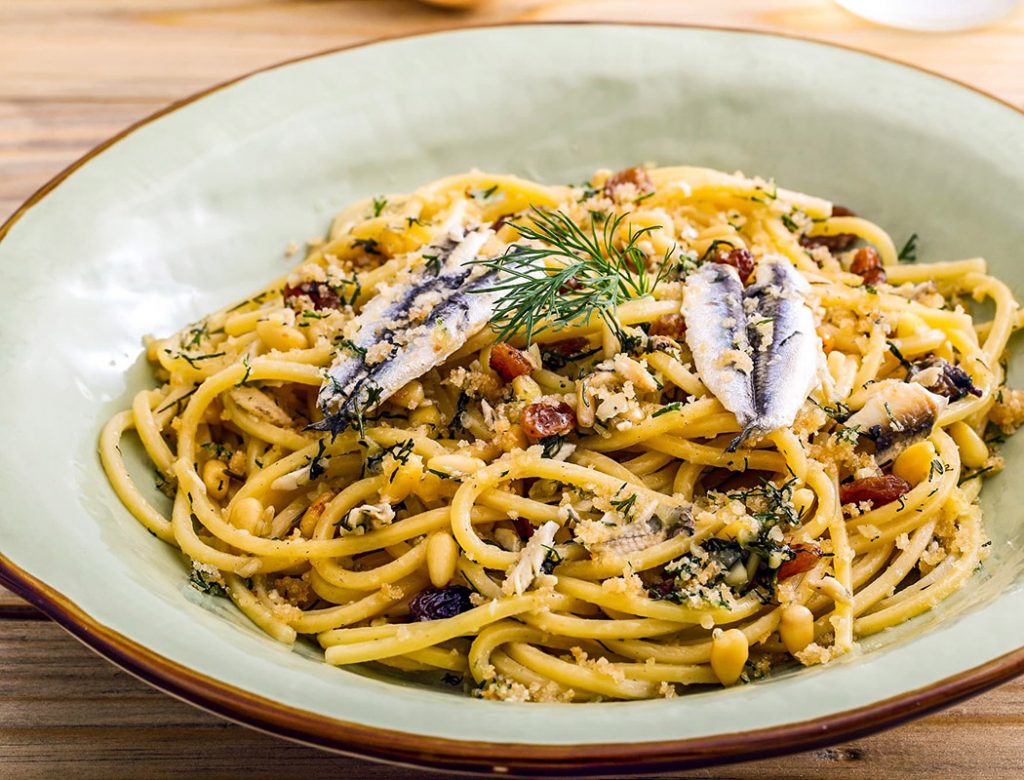 Octopus is very common in the Mediterranean Sea , so it is a common product for culinary dishes. Very popular in southern Italy. Today the main recipe, also common in Taormina, involves cooking octopus, which is first chilled and then seasoned with lemon, garlic, butter and parsley. 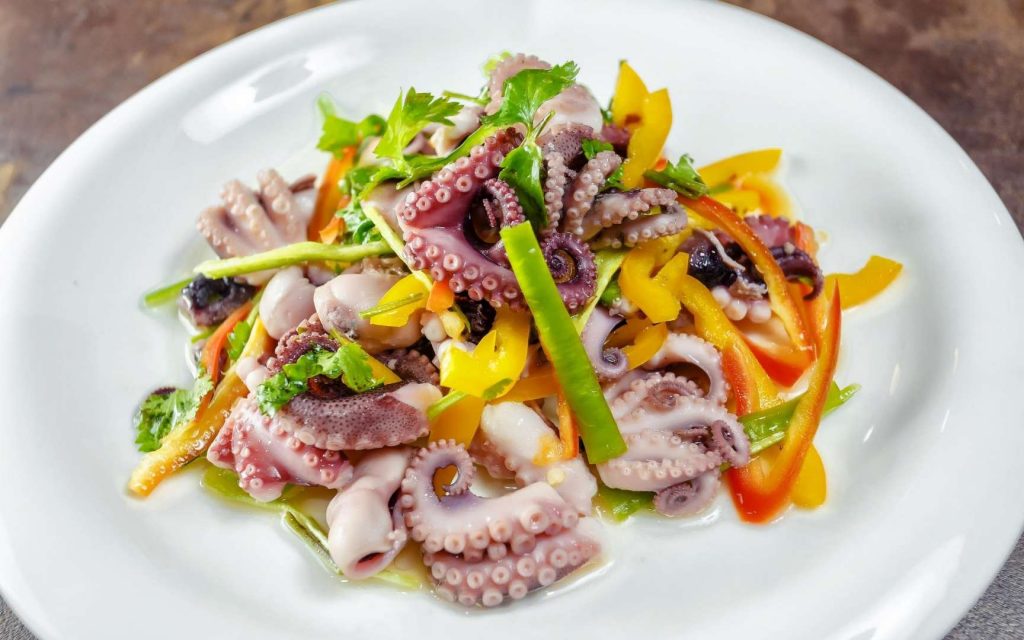 This is a widespread wheat flatbread that is not difficult to make, made of soft and steep dough. It is baked in the oven and covered with anchovies, escarole, various kinds of cheese (tuma or mozzarella) and sliced tomatoes. The recipe has ancient origins, in fact, this focaccia was first made in the early twentieth century by Messina bakers and did not include the use of tomatoes. You will find Messina focaccia in all the bakeries, different variations in every Sicilian province. 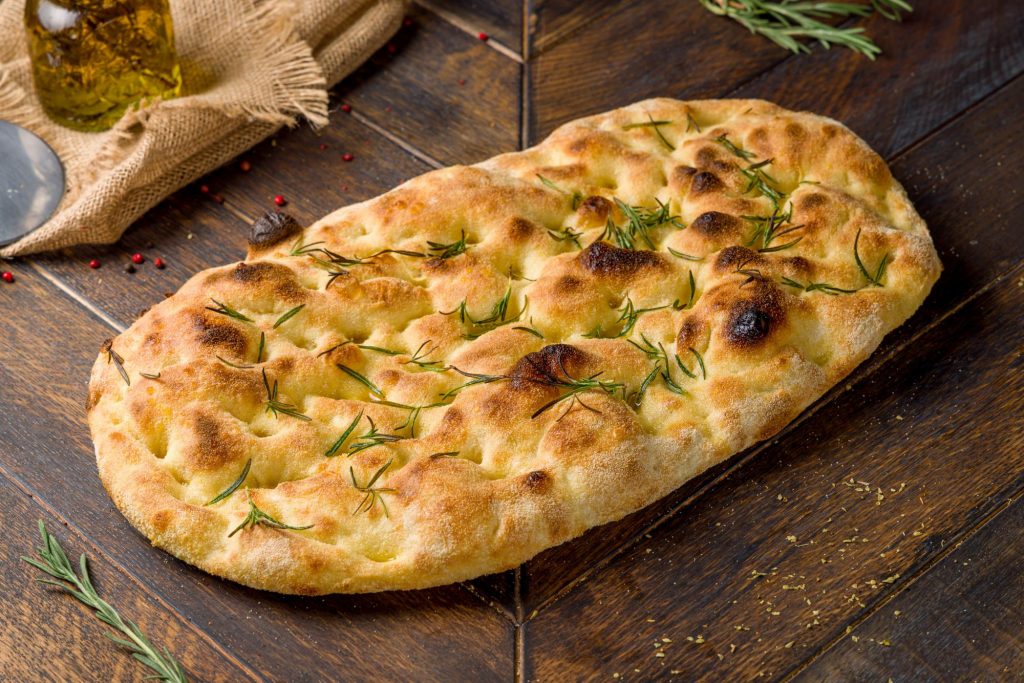 Taormina is full of bars and restaurants for all tastes and budgets: you’ll find luxury restaurants as well as small bistros, taverns and bars where you can taste the best Sicilian delicacies, from takeaways to the most typical first and second courses (pasta with sardines or fried fish). The city’s main streets are by far the most popular. Locals, go there especially in the evening, enjoying ice cream.

READ
5 proven places in and around Europe, for a vacation by the sea in the fall

You can’t forget the taste of the dishes that Sicilian cuisine offers you, such as arancine and python, rustic sourdough breaded, baked or fried. The horsemeat sandwich and pani cunzato (literally seasoned bread) are also excellent . And you don’t appreciate a good dessert, like nzuddi, crispy almond-based cookies with orange flakes and cuzzole, fried bread slices.

10 dishes to try in Sicily

Sicily is a tourist paradise, where you can get new experiences not only from the beautiful nature and architectural historical monuments, but also from the local cuisine characteristic of this island.

Sicilian cuisine is a cocktail of Greek, Arabic, Spanish and Italian traditions with a touch of meat flavor from the Vikings. In different time periods the island passed into the ownership of various states and peoples, this had a significant impact on the Sicilian cuisine.

Washed on three sides by the waters of the sea, the island of Sicily is famous throughout the world for its dishes with the freshest seafood. Until now, Sicilians are sure that thanks to the ancient method of tuna fishing, which was abandoned by all countries, the dishes made of this fish are the most delicious on the island.

Scoppularicchi is a stew of cuttlefish and squid. Scoppularicchi is a traditional Sicilian dish and a must try if you visit Syracuse, the birthplace of the famous ancient Greek scientist Archimedes. Golden chunks of clams fried in olive oil until crispy, served with lemon slices and good white wine.

The islanders use simple ingredients to create culinary masterpieces which are available to all the guests and inhabitants of this bountiful corner of the planet.

Arracini with pistachios are balls of rice with cheese and pistachio cream, fried in batter, they resemble little oranges. The love of rice came to Sicily with the Arab tribes. Aside from the pistachio filling, there are many variations of stuffing that the rice “oranges” are stuffed with.

READ
The soul of Batumi - the seaport

Caponata is a common dish of eggplant throughout Sicily, with more than 37 variations of preparation. It is used both as a side dish and as a separate appetizer. The history of this recipe is unique. Originally the dish was prepared from dolphin meat and served in aristocratic wealthy families. But the locals were smart enough to substitute the dolphin with eggplant, which is what made the dish so palatable and popular all over the island.

Fish, vegetables, fruits and cheeses are the main ingredients in Sicilian cuisine. But some meat dishes created here have become national, like pizza for Italy.

Falsomagro is a meatloaf stuffed with boiled egg, ham and cheese, stewed over low heat in wine and tomato sauce.

Italians are proud of their pasta dishes, but even here the locals of the island were able to distinguish themselves by giving the usual spaghetti its unique taste, thus sharing the laurels for cooking the best pasta with the inhabitants of the mainland.

Pasta con le Sarde a Mare is the famous thick Italian spaghetti pasta with pine nuts and anchovies. The name of the dish suggests the presence of sardines, but according to cheerful Sicilians, they stayed in the sea.

Pasta alla norma was first made in Catania, but quickly spread all over the island. The highlight of the recipe is the salted cottage cheese and eggplant.

Those with a sweet tooth who visit Sicily realize that they know how to make sweets. The enormous variety and incredible taste of the local confectioners amaze all the tourists stopping by even the smallest café.

Cassatine siciliane is a delicate sponge cake with ricotta cheese, almond cream, and decorated with colored icing and candied fruits.

Canolli is a Sicilian pastry, a tube of crispy waffle dough with cottage cheese.

Sicily is an island with centuries of history, where the unique gastronomic traditions have become an additional reason for millions of tourists to visit this paradise destination every year.