In 2017, the UN recognized Norway as the happiest country in the world, according to the World Happiness Report. This despite the fact that the country is winter for more than half a year and the sun only comes out for a few hours. But the Norwegians are not discouraged, and do everything possible to make the winter in their country interesting and comfortable, including tourists. We tell you what to see and do in winter Norway. 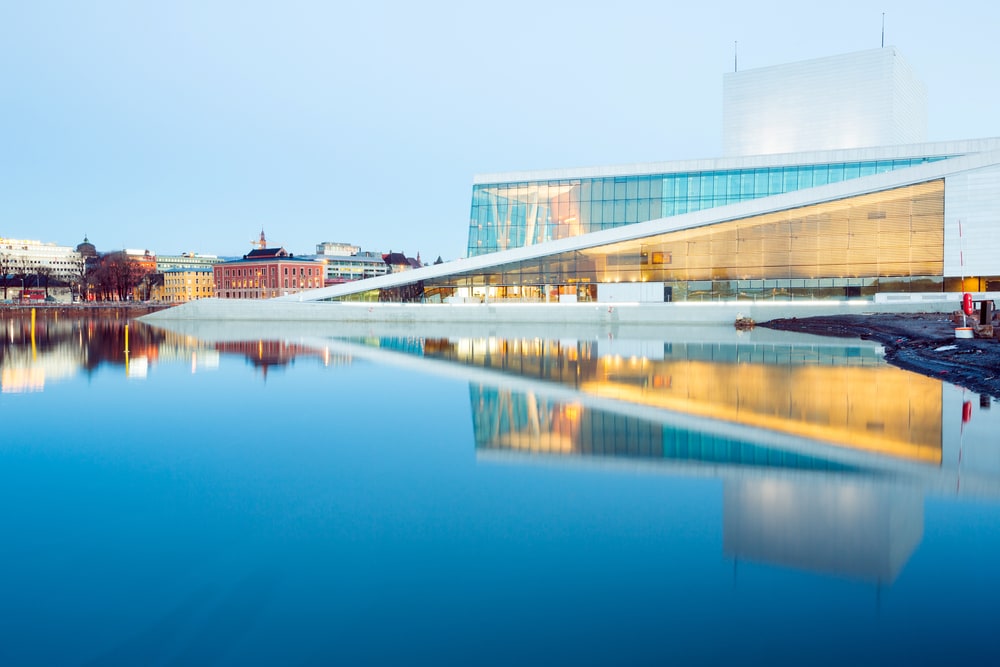 The weather in the Norwegian capital in winter is warm and humid, with temperatures rarely dropping below minus 7 degrees. Don’t be surprised if it rains in January. But Oslo is a compact city, and a few hours will be enough to leisurely explore the center.

On the main street – Karl Johan, Oslo City Hall, where they present the Nobel Prize (once a week in the town hall are free guided tours),

Royal Palace, National Gallery with the famous work of Edward Munch “Scream,” the pier, where local fishermen sell freshly caught and boiled shrimp. Next to the pier is the New Opera House with a sloping roof, which you can and should climb. This is a favorite resting place of Norwegians – from the roof offers a panorama of the city center and a view of the islands of the Oslo-fjord with brightly colored wooden houses.

On the waterfront of Aker Bruges you can see moored ships and try the national cuisine in one of the restaurants. You can explore the national catering at the Mathallen Gastronomic Center. Here they sell food from private Norwegian producers.

Next to the waterfront is the Askershus Fortress with the Armed Forces Museum, which is dedicated to the country’s military craft from the Vikings to World War II. History buffs should check out the Viking Ship Museum and the Kon-Tiki Museum, dedicated to the navigator Thor Heyerdahl. There is a partially restored legendary wooden ship, on which he and his team crossed the Pacific Ocean. 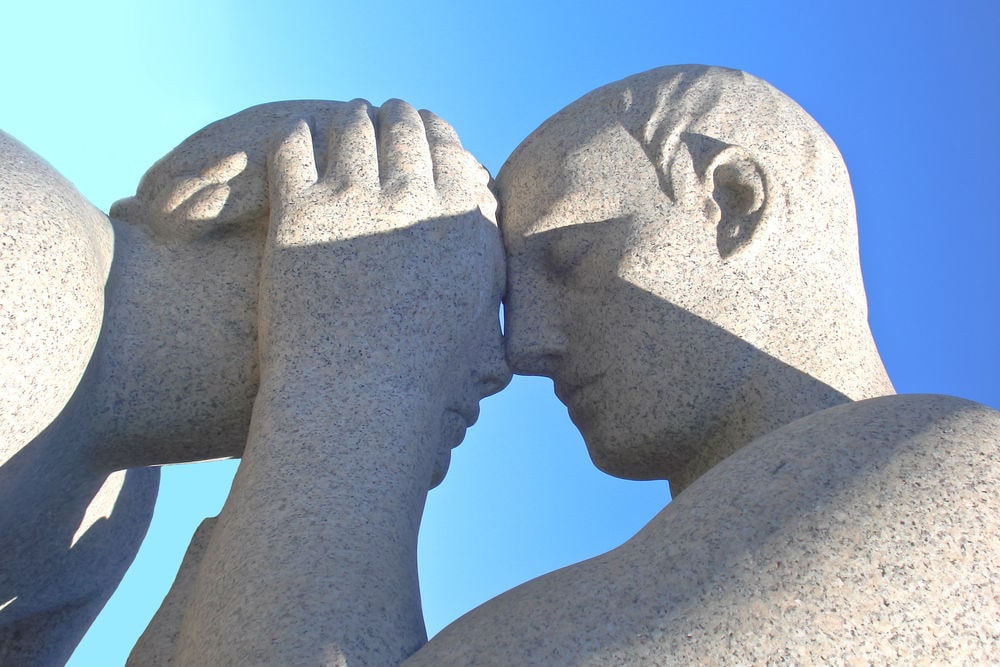 If this is your first time in Oslo, stock up on hot drinks and head to Vigeland Park despite the weather. More than 200 human sculptures of granite, bronze and cast iron are on display outdoors. They show different states of people: emotions, relationships, activities such as wrestling or dancing. The park is open all year round and admission is free.

It is convenient and profitable to move around the city and visit museums with the card Oslo Pass – it gives the right to visit more than 30 museums for free and use any public transport. 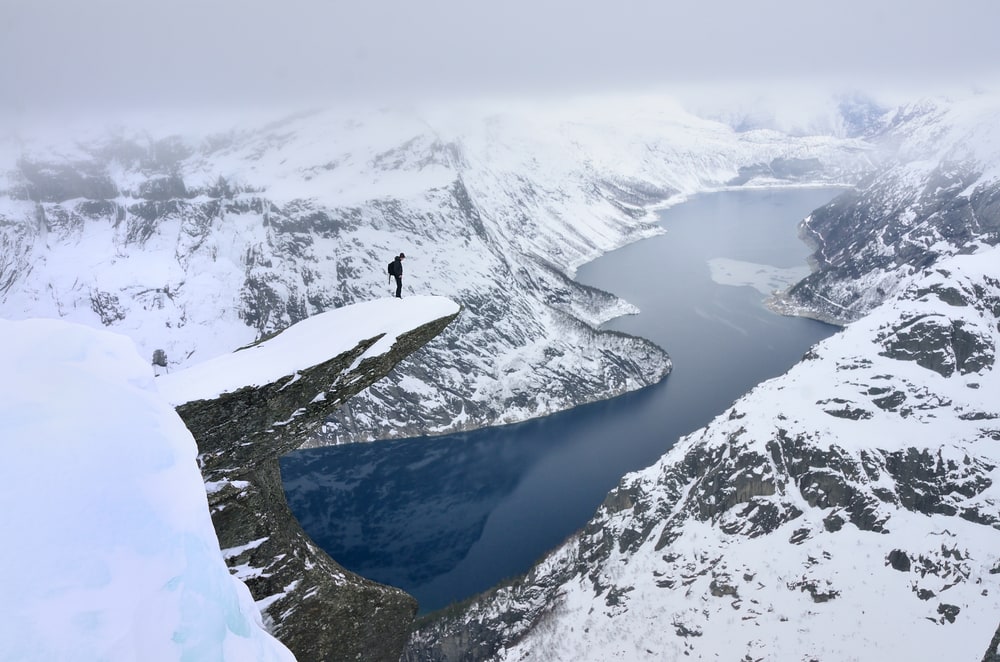 The most famous fjords – Nærøy-fjord, Sogne-fjord, Lüse-fjord, Geiranger-fjord – are located on the west coast. In winter the climate is mild, and there are far fewer tourists than in summer. Thanks to the warm Gulf Stream the fjords are usually not covered in ice. But the number of cruises and excursion ferries in the cold season is greatly reduced, and sometimes the flight is canceled due to bad weather. Because of the short winter day, excursion ferries leave early in the morning.

In winter, it is easier to sail along Nerei Fjord, which is the narrowest fjord in the world, a branch of the larger Sogne Fjord. In 2005, Nereus-Fjord was included in the list of UNESCO World Heritage Sites. Its length – 18 kilometers, from all sides of the fjord surrounded by steep mountains, on the slopes of which lie comfortable villages. They offer tourists to try Norwegian brown goat cheese.

To look at the fjords from the height you can look at Stegastein observation deck above the Eurlanfjord. It protrudes 30 meters out of the rock at a height of 650 meters. It is open all year round. You can reach it from the tourist village of Flom.

3. Take a ride on one of the steepest railroads in the world 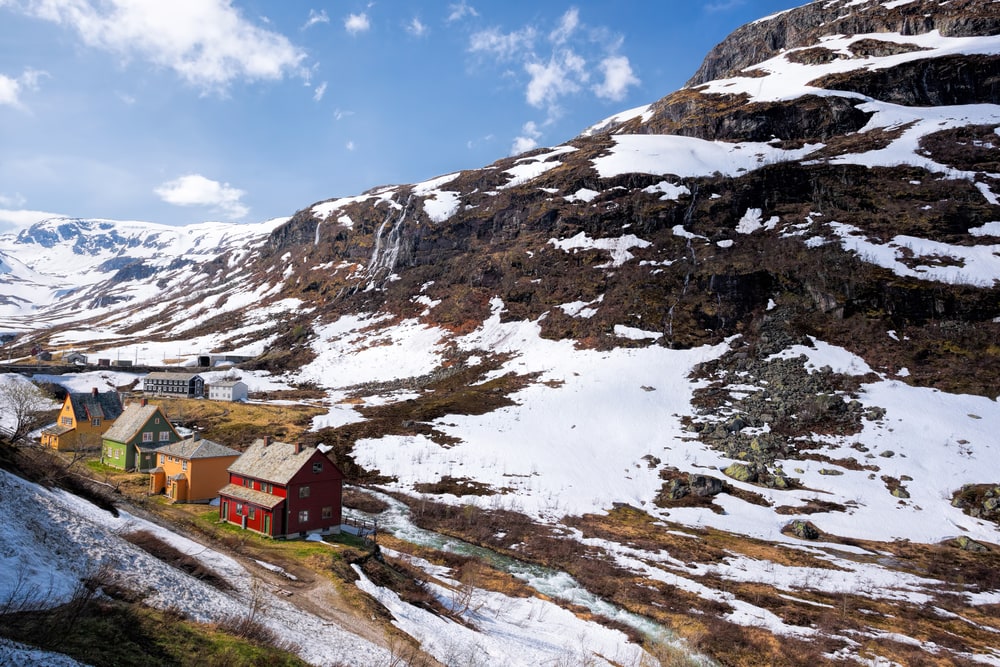 A trip on the Flom Railroad was ranked by National Geographic as one of the top 10 rail journeys in Europe, and Lonely Planet Traveller recognized it as the best rail trip in the world.

The train takes passengers in one hour from a tributary of the Sogne Fjord in the village of Flom to Murdal Station, 867 meters above sea level. Behind the window during the trip are all the classic Norwegian landscapes: from the fjord and its valley to the snow-capped peaks past waterfalls and mountain rivers. The Flom Railway has one of the steepest gradients in the world: 80% of the line runs at a gradient of 5.5%.

You can also get to Myrdal station by the Bergen Railway from Oslo. At Myrdal you can change to the Flom line and go down to Flom to the fjord (more about the Bergen railroad at www.nsb.no).

4. Go skiing or snowboarding with a view of the fjords 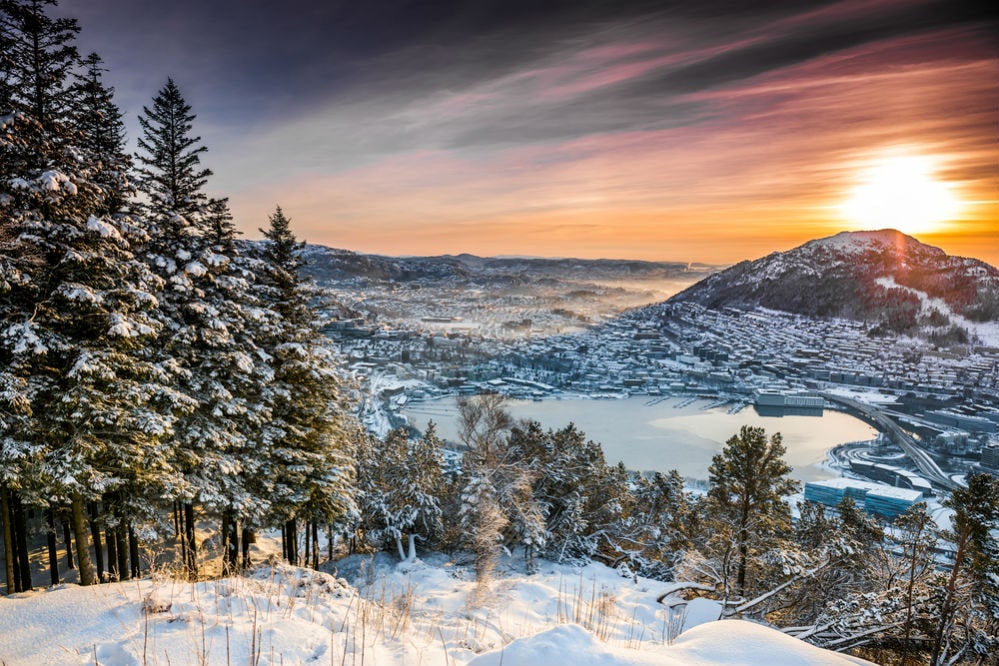 Skiing is Norway’s national sport. Locals are proud of the skier, 2010 Olympic champion Aksel Lund Svindal, and one of the world’s first skiers, Sondre Nurheim, who invented the ski mount in the second half of the 19th century. The invention made skiing comfortable and became the prototype of modern models.

Ski resorts are everywhere in Norway, but the most popular is skiing in the fjord region. The mountains here rise out of the blue, non-freezing water to a height of nearly 2,000 meters. This region will especially appeal to fans of off-piste skiing.

Major ski resorts in the fjords are located in Voss, Murkdalen, Sirdal, Sogndal, Sogne-fjord, Strandafjell and Alpepass region (in the latter ski pass gives the right to use the elevators at nine resorts). Almost all resorts have ski schools. 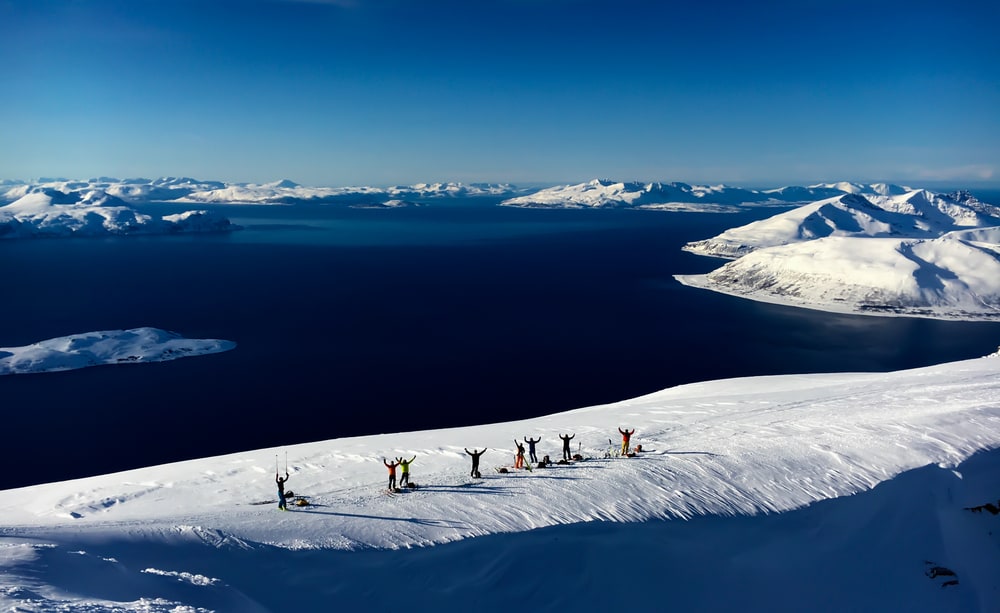 You can go skiing in Oslo, too. The Trivann Winter Park, with slopes, is a 30-minute drive from the city center. Easy to get from the capital and to major resorts in eastern Norway: Jotunheim, Trysil, Hemsedal, Lillehammer (here, in 1994, was the winter Olympics, and stay at the resort can be ice hotel: sleep at a temperature of -3 to -7 degrees in the Arctic bed under a cozy sheepskin),

It is worth going to the north of the country for skiing with a view of the sea. But the climate there is harsher – the average temperature drops to -20 degrees, and sometimes freezing at -40.

Among the locals in Norway is common and another type of recreation: a day trip on cross-country skiing with a small stock of provisions: a hot drink in a thermos, chocolate and sandwiches. Contact local travel agencies to arrange such a vacation. 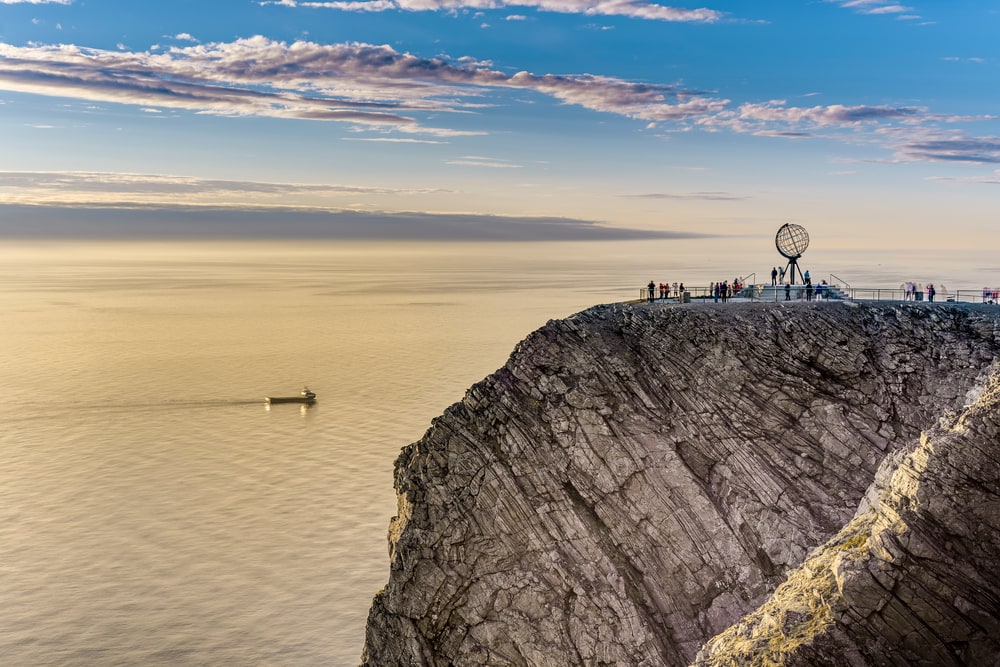 To cross the Arctic Circle, head to Cape Nordkapp, the northernmost point of continental Europe. Here you will be separated from the North Pole only by the ocean and the Svalbard Archipelago.

Thanks to the Gulf Stream the climate at the Cape is mild: in winter average temperature is -3 degrees, but sometimes it drops to -15. From November 21 to January 21 in the region there comes the polar night and the sun does not rise above the horizon. But this does not hinder the development of tourism: in winter here ride on dog and reindeer sledges, snowmobiles, observe the northern lights and go ice fishing on the local lakes. The North Cape Hall information center is open year-round on the Cape. 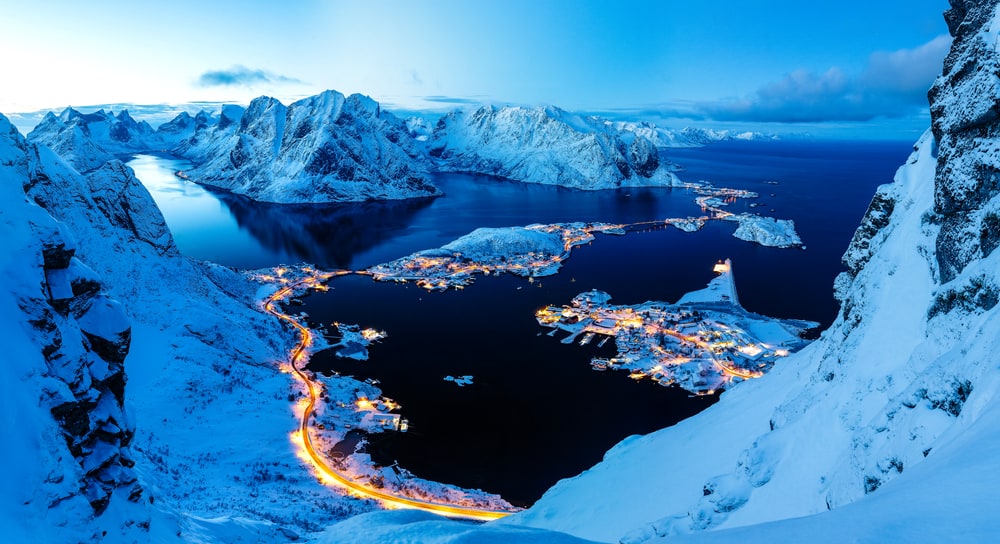 The islands are also located above the Arctic Circle, in the Norwegian Sea. People go to Lofoten for the views of harsh polar nature, the northern lights and distinctive fishing villages with brightly colored houses.

READ
Ile de France. The French region in which Paris is located

On the islands you can stay in a traditional fishermen’s hut – “rorbu” and try the local dish – “tørrfisk”. This is dried cod caught during the spawning period.

On the islands there are many traces of the Vikings. Archaeologists have found their largest dwelling here – it is 83 meters long. The find has been restored and made into a living museum. 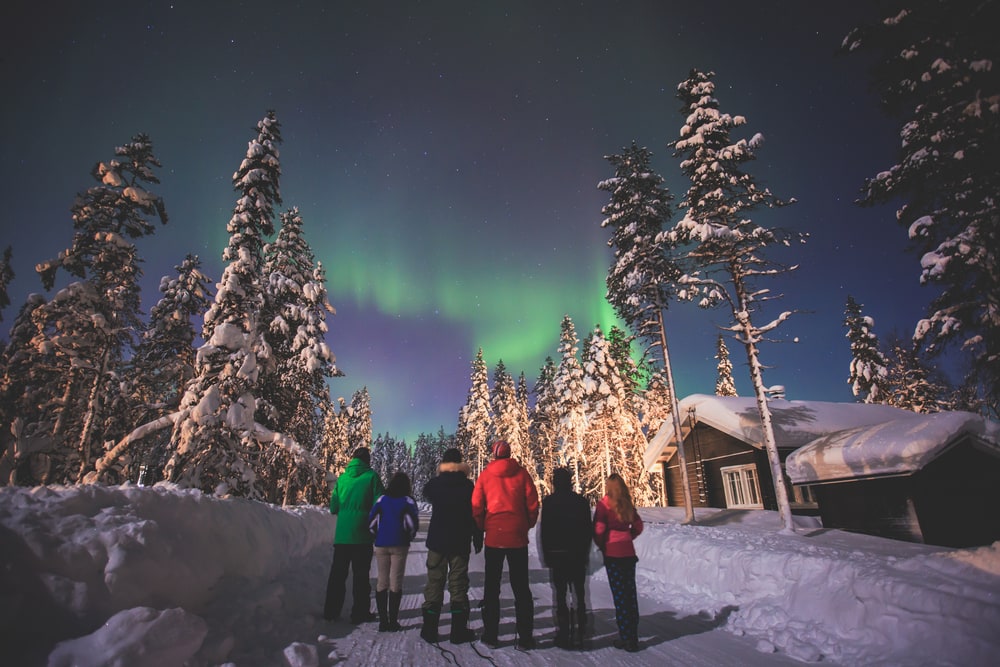 Aurora Borealis belt covers the area from Lofoten Islands to Cape Nordkapp. A popular tourist destination is the city of Tromsø. This is the largest city in Northern Norway, just behind which begins unspoiled nature. Tromsø offers many different tours for the northern lights, including snowmobile tours.

Observe the Aurora Borealis in Norway from late September to late March. The probability is believed to increase during dry, cold weather. You can track the forecasts through the Norway Lights app.

8. A look at the world’s strongest water flow 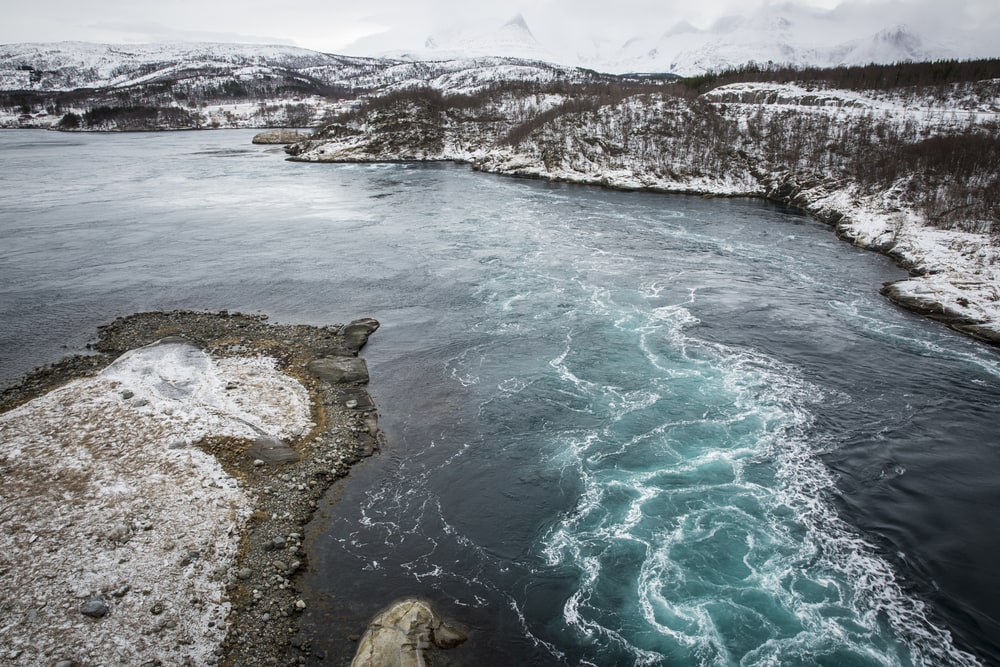 Near the Norwegian town of Budo, in a narrow strait between two fjords, you can see the world’s strongest tidal current – the Salstraumen whirlpool. This whirlpool races through the narrow straits at 40 km/h and collides with the tidal current, creating sinkholes of up to 12 meters in diameter. This phenomenon is repeated every six hours. Tour operators make a daily schedule depending on the phases of the moon. Salstraumen observed from the bridge, which connects the banks of the fjord and passes over the craters. Particularly intrepid tourists take a boat to the mighty funnels, but it is a dangerous pastime.

READ
The Lammelstad: A visit to the parish village of Swedish Lapland

9. See killer whales in the wild 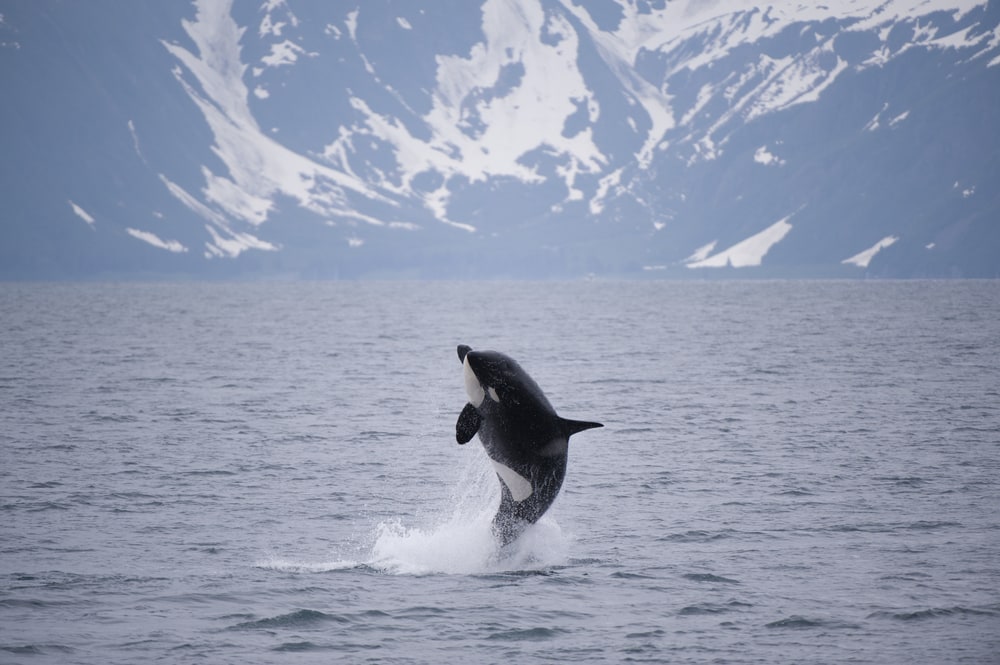 In the winter, you can see whole flocks of whales right from the shore in Norway. Between October and February, orcas and humpback whales feast on small fish in the cold waters of the Lofoten Islands, often jumping out of the water. The closest they come to the shore is at Vesterålen Archipelago, which is to the north of Lofoten. It is better to visit a travel agency and take a boat several kilometers off the coast to see the giant aquatic animals up close.