12 most beautiful cities in Holland

Made a selection of the 12 best cities in the Netherlands. They do not include megacities like Amsterdam, The Hague and Rotterdam. But the fishing villages and cheese “capitals” of Holland, which we will tell you about, fascinate no less.

The Netherlands is a country that bears little resemblance to other European states. There and the architecture is original, and the sights are unconventional.

However, millions of tourists are looking for all this in the major cities of the Netherlands. And this is unfair, because there are other colorful places worth visiting in this country. We will tell you about the 12 most beautiful of them.

The most interesting tours are itineraries from locals on Tripster. You can start with a sightseeing tour of Amsterdam. Walk from Dam Square, through the canals and streets, to the Red Light Quarter. And devote a day to an atmospheric trip to the Mill Village of Saanse Schaanse and Fisherman’s Volendam.

Cities in Holland: 12 of the best

A city in Old Zealand, on the shores of the North Sea. On its territory there are several hundred architectural and historical monuments. But the most popular are the church of Sint-Livensmonstertoren, the harbor gate and the maritime museum. One day is enough to see Ziriksee. And an overnight stay is hardly necessary. 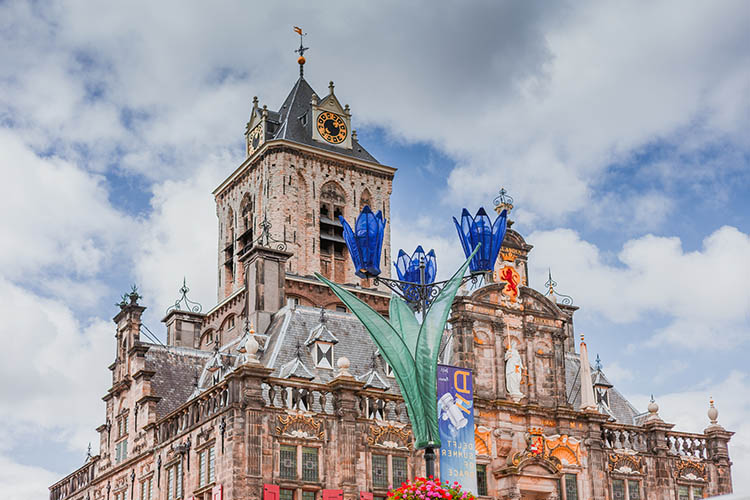 Cathedral in the main square of Delft Photo: Dreamstime.com

One of the most beautiful cities in the country on the outskirts of The Hague. Its symbols were the Delft porcelain and Jan Vermeer – a native of Delft. The latter wrote the famous Girl with a Pearl Earring in the city. After the release of the movie with Scarlett Johansson in the title role tens of thousands of tourists rushed to the gallery Mauritshuis in The Hague, where the picture is stored. And Delft is also proud of its canals, because they are not much smaller than in Amsterdam.

READ
Switzerland is a country worth visiting.

Volendam is a fishing village that grew to city size. Initially, farmers and fishermen lived there. Then it became known to Dutch artists. And now the guest list includes as many as Renoir and Picasso. Tourists come to Volendam to immerse themselves in the atmosphere of a fisherman’s life, look at the old boats and the people in traditional dress. Chic in photos and videos of tiled roofs. 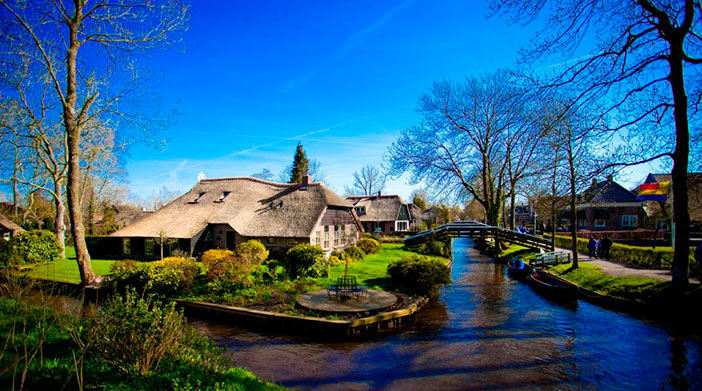 The village of Giethoorn is the Dutch Venice Photo: Pixabay.com

Dutch Venice, riddled with canals. Their total length is about 90 km. Roads in the town on the fingers to count, but people are used to navigating on water. Some buildings are impossible to get to without a boat. Therefore, tourists are encouraged to rent a “motorboat” and go on a tour of Githorn. Stop at the beautiful lodges and visit restaurants on the water.

Duisburg was once a strategic city of Holland. Today only memories remain of the former glory of the town on the river Jessel. Walking around Duisburg, you can see buildings with plaques that give biographical information about the former owners. Tour guides also recommend visiting the herb garden, the De Waag town hall, the mustard museum and the glass museum. 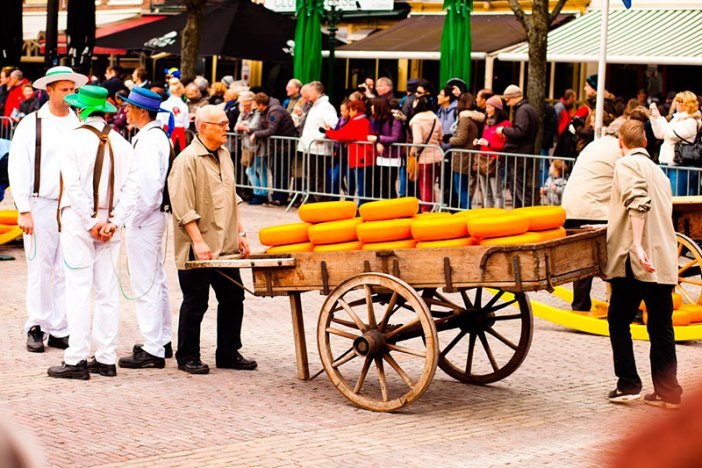 The place where the largest cheese fair in Holland takes place. It doesn’t last a day or two, but several months. And during that time, cheese buyers from all over the country and Europe flock there. The bright yellow round heads are selected and weighed according to the rules established since the Middle Ages. They haggle for a long time, coming to a consensus. And then they celebrate the deal with a handshake or even a shot of jenever.

READ
Holidays in the Falkland Islands

Appingedam is a Dutch city by the sea. Its historical part is a setting for a movie about the Middle Ages. It is full of original buildings scattered along the Damsterdip canal. You can explore it on foot, by bike and by ferry from the water. From all angles Upingedum is good!

Harlingen is a city in the north of the Netherlands, in the harbor of Friesland. Its past is brightly reflected in its architecture. For the Gothic aficionados! Literally every step of the way magnificent mansions and historical monuments. 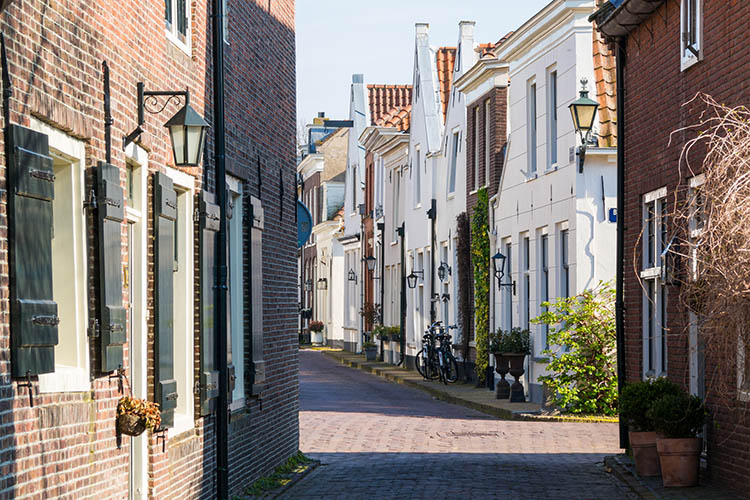 A fortress city built back in 1300. The historic center occupies a compact area and forms a circle surrounded by moats. From a bird’s-eye view, it looks unusual. So much so that even helicopter tours over the Narden are willing to pay a lot of money. But for a walking tour of the city is enough and a few hours. Of interest there are several churches, house-museum fortress and textile factory.

A little known city on the border of the Netherlands and Belgium. Was once an autonomous principality and was ruled by 20 nuns from the Benedictine abbey. But today there are no vivid sights in Torn. Although it impresses as a single ensemble: colorful houses and ancient churches. 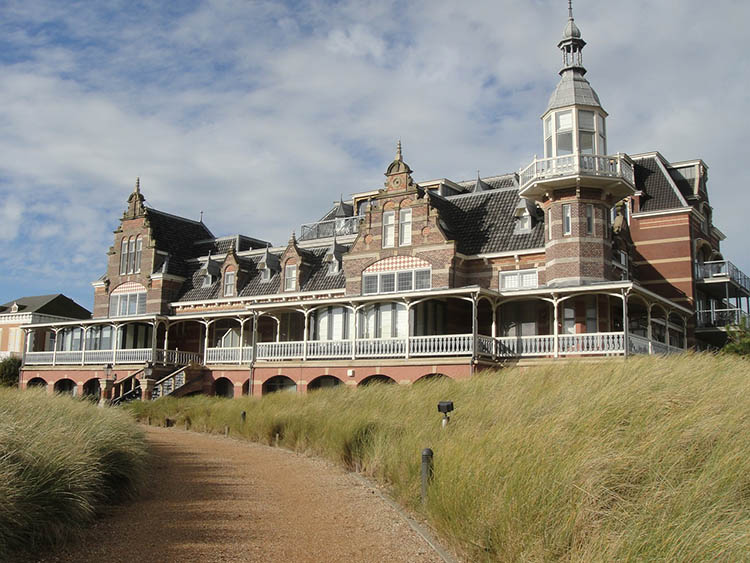 Hotel-castle on the coast of Domburg Photo: Pixabay.com

Domburg is a village on the shore of the North Sea. A few centuries ago it turned into a fashionable resort. But it is not only the beach and coastal restaurants that Domburg is famous for. It is also known as the “artists’ village” – art people at all times came closer to the sea for inspiration.

The epitome of medieval Europe in every sense. And it is not just architecture or narrow streets. In 16th century women were tested for witchcraft in Audewater. At the end of it they issued a certificate that the lady was not a witch. The Middle Ages are gone, but as entertainment this procedure is still practiced – on female tourists. And there is no shortage of people willing to do it!

READ
7 things to do in Munich, Germany in fall

Now you have a list of the top small towns in the Netherlands. And to each of them it is easy to arrange a trip from Amsterdam, The Hague and Rotterdam. All that remains is to plan the route and study the train schedules.

The 10 most beautiful cities in the Netherlands (except Amsterdam)

Endless canals, centuries-old houses and bright fields of tulips – the Netherlands has a lot of beautiful places to visit! If you decide to visit several Dutch cities during your trip, take a few minutes to read this article. We have compiled the most beautiful cities of the Netherlands into one list. All you have to do is to choose.

With a population of about half a million, The Hague is considered the third largest city in the country. The Hague is easily accessible from Amsterdam. By car it takes just under an hour. 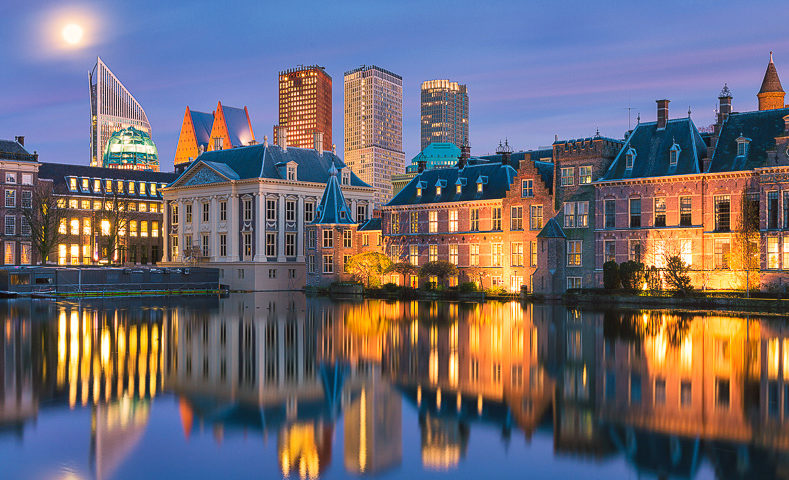 Here are the main offices of many world-famous companies and organizations. Most of them are located in historic buildings, which are scattered throughout the city. Once in The Hague, be sure to visit Madurodam Park of Miniatures, which allows you to travel all over the country in one day.

Beautiful Delft is located halfway between The Hague and Rotterdam. Delft is often chosen for a day trip, as it is easily accessible from Amsterdam as well as other nearby cities. But the views are spectacular. No wonder that Delft attracts many tourists. 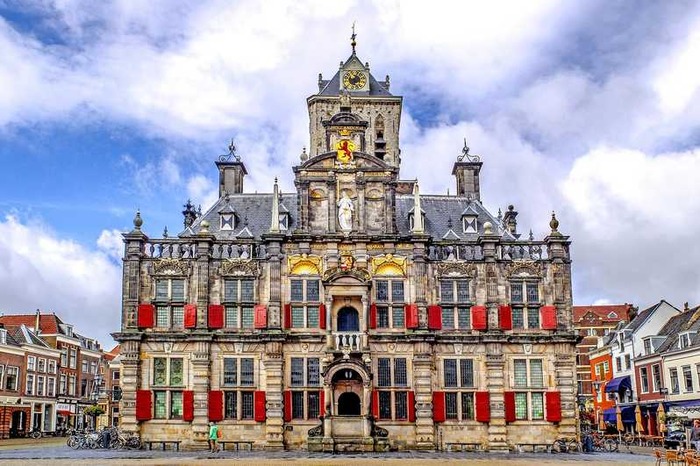 Read also: What to bring from Amsterdam: 10 practical souvenirs

To get an idea of how the city is structured, be sure to visit the New Kerk Tower and take a bird’s eye view of Delft.

The city is close to the border with Germany and Belgium, so a day trip from Amsterdam is not the most convenient option. If you like historical places, Maastricht should be on your list. By the way, this is where the real D’Artagnan was killed. And here you will also find one of the coolest bookstores in Europe, which is located in a former church. 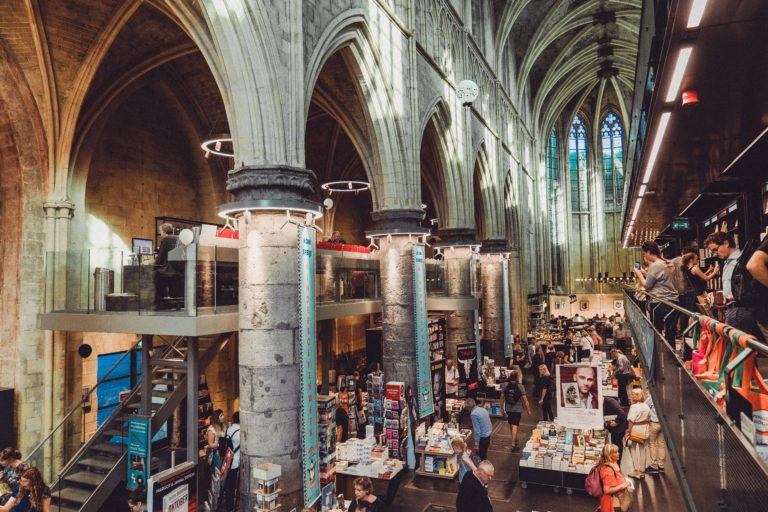 The main attractions of Maastricht include a walk through the historic city center, visiting one of the city’s many museums and ancient churches.

There is no doubt that Maastricht is one of the most beautiful Dutch cities. We would recommend you to spend a few days getting to know it, especially because there is a lot to see there.

Did someone say cheese? No doubt you’ve heard of Gouda before, thanks to the cheese of the same name. But Gouda is so much more than just cheese. From beautiful canals to churches disguised as houses.

The most interesting places for the tourist are De Goudse Waag (the historic cheese weighing house), the town hall with its mechanical clock and the windmill, which still sells its own freshly ground flour in the store next door. 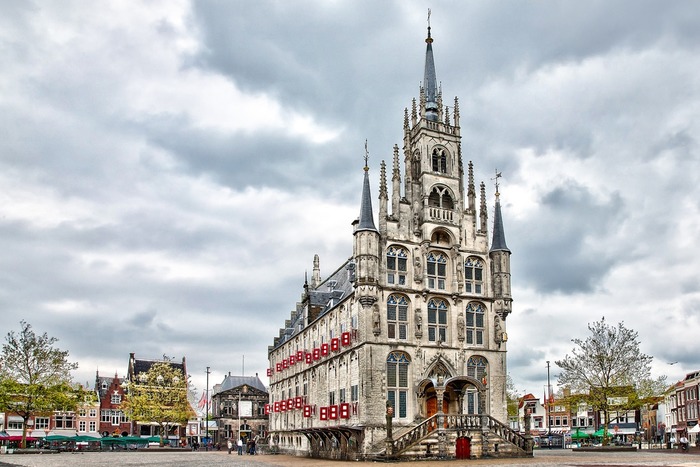 Read also: Where to pet a goat: baby farms in the Netherlands

Head to Gouda on a Thursday from early April to late August and you’ll hit the colorful cheese market – quite a sight!

Apeldoorn is a city overlooking the picturesque Eissel Valley. Scattered throughout the city are numerous historic buildings. Every one of them is worth your attention. The Royal Palace Het Loo with its gardens and park is something that cannot be missed on a trip to Apeldoorn. 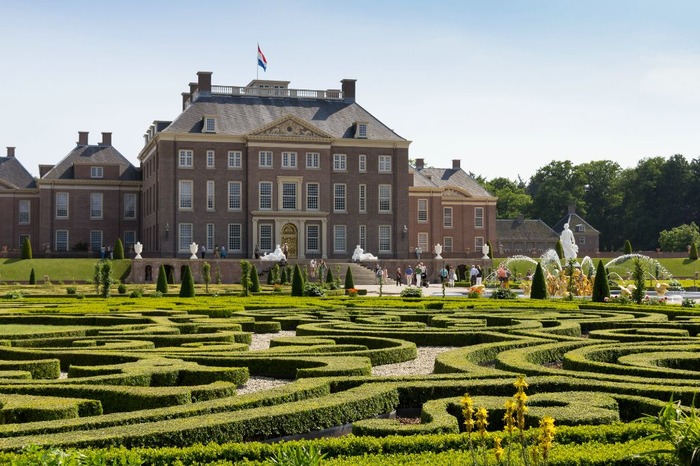 A city that captivates from the first minutes! Middelburg’s ancient buildings and churches, picturesque canals and bridges make you feel like you’ve been transported back to the Middle Ages. It’s safe to say that Middelburg is one of the most beautiful cities in the Netherlands. 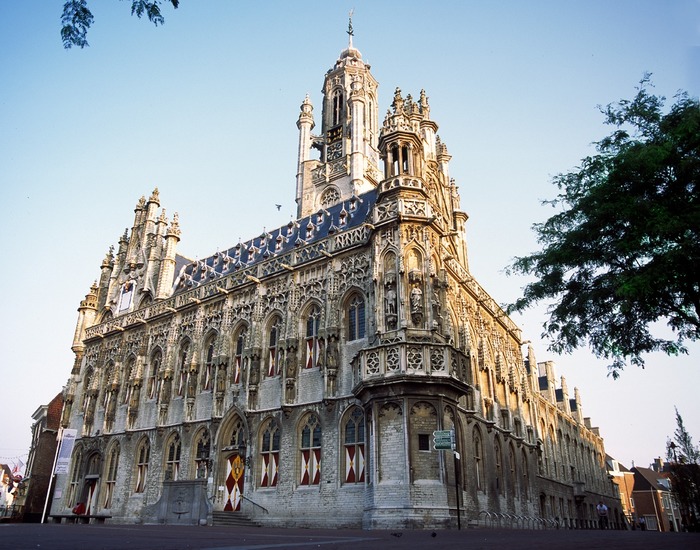 The university city of Leiden surprises you with its beauty. Located on the banks of the Old Rhine, Leiden is a popular destination for those who want to escape from the hustle and bustle of urbanized life. You’ll love its canals, streets, museums, botanical garden, windmills, castle and more!

Read also: Where to go from Amsterdam for 1 day

The city of Utrecht is considered the fourth largest in the Netherlands. It is also known as the religious center of the country, as most of the medieval buildings that can be found in the area were built by and for the church. Many of the historic buildings are still remarkable for their grandeur to this day. 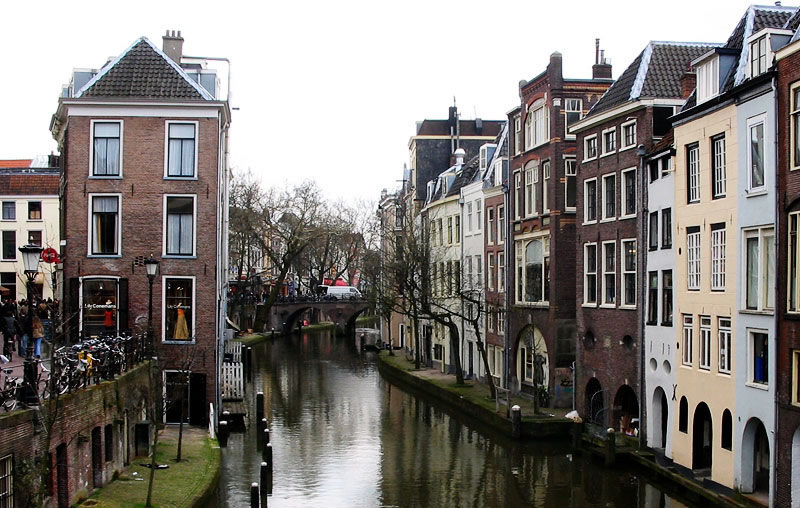 Futuristic architecture, lots of bridges and a fantastic atmosphere: there is no other city like Rotterdam in the Netherlands or Europe. And it’s great! 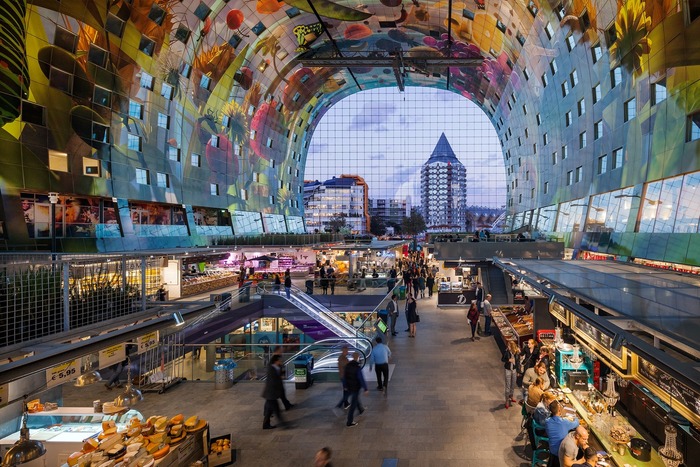 Read also: Clothing made of hemp: fashion or common sense?

In the northern part of the Netherlands is another beautiful city, Leeuwarden. Many of the buildings in the city date back to the 10th century. And picturesque canals accentuate the beauty of Leeuwarden. 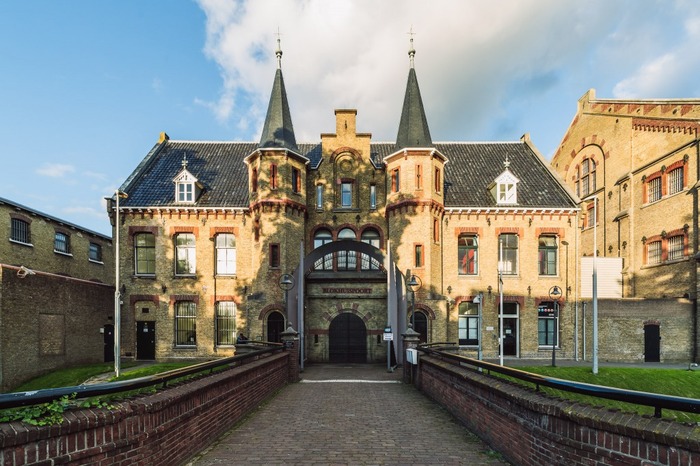 Just outside the city there are ancient archaeological excavations in which houses from the 2nd century were discovered. Every year on the Feast of the Ascension of the Lord, Leuwarden hosts a stunningly beautiful flower market, which is incidentally the largest in the Netherlands.