Walk along the Tyburn Current

Marylebone Lane led from the village to London. On this stretch, the street ran along the bank of the river, which explains its curve. In other parts of the area, the streets form a more or less regular grid. Continue along Marylebone Lane to the fork at The Button Queen. Here the street goes to the left, away from the river, so we will go right on Jason Court. At Wigmore Street turn right and then, after crossing the street at the traffic light, walk perpendicular to James Street. When you reach its intersection with Oxford Street and look right and left, you will realize that you are indeed in the river valley. In 1941, you could see the river flowing at the bottom of a crater created by an air bomb explosion.

Continue in the same direction along Gilbert Stree t, deepening into the upscale residential area of Mayfair. Somewhere here the river turns east again, but the level of the sidewalk has changed the topography so much that it is impossible to trace the exact line of the riverbed. Nevertheless, the steep slope toward St Anselm’s Place is a sure indication of the direction of flow.

Turn left and at the end of the street turn right onto Davies Street and then left again onto Davies Mews. At the end of the mews turn right again onto South Molton Lane, over Brook Street (note the watery name: brook means ‘brook’), and into narrow Avery Row, built in the 1720s by the mason Henry Avery after Tyburn was chimney-stepped shortly beforehand. The low point of the street in its middle part corresponds to the ground level, and from the western side you can see the slope of the valley, understood on the right along with Brook’s Mews.

READ
5 things to do in Dresden, Germany 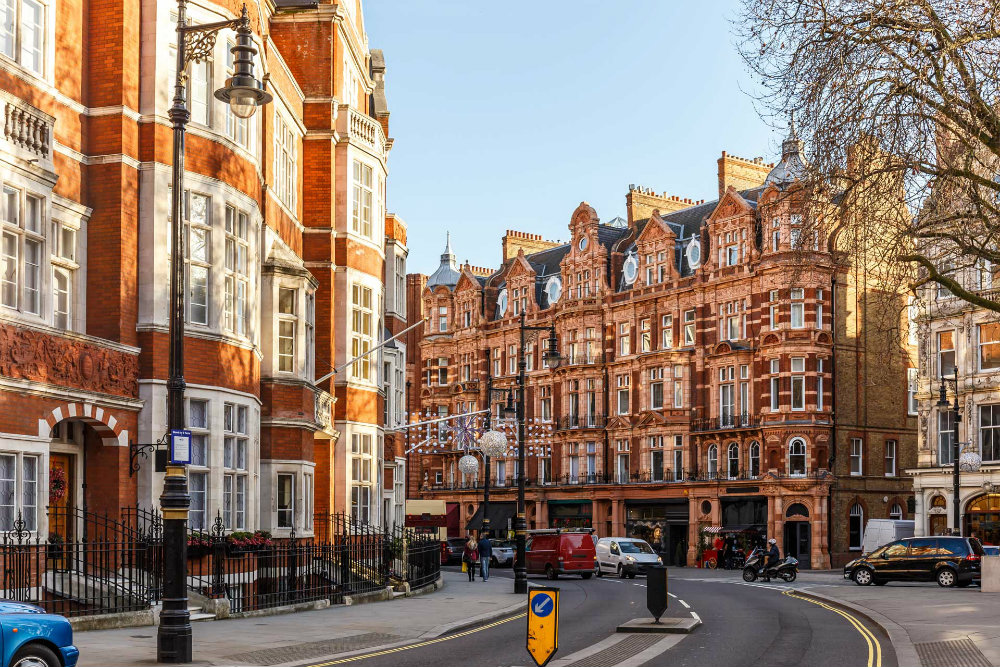 Brook Street and Grosvenor Street, respectively, run along man-made embankments to the rear and front. It is these embankments, or levees, that are responsible for our constant up and down movement along the river bed, which seemed to be supposed to be level. Go up to Grosvenor Street, cross it, and across the open space make your way to Bourdon Street. There is again a marked slope to the valley floor. As the buildings get in our way, let’s go around them. Go right up the hill (take a left at the fork) and turn left near the top onto Jones Street, which is pedestrianized. You’ll end up in Berkeley Square.

From the corner at the far end of the square you can see the bottom of the valley, and even farther, the opposite slope of it, rising to Piccadilly. We will soon be there, but first we return to where we left the river by leaving Burdon Street. From the corner turn left onto Bruton Place and past the Guinea pub down to the valley bed. Turn right and cross Bruton Street and walk along Bruton Lane, leaving the Coach and Horses pub on your left.

When Bruton Lane begins to turn right, look up to your left to see a 19th-century stone tablet on the wall marking the boundary between Berkeley Manor and the City-owned Conduit Mead. Before the appearance of these streets the boundary between the two estates ran along the river. Near the end of Bruton Lane a private road with a gate follows the riverbed. Keep right and then turn left onto Berkeley Street . Hay Hill and the rise to Piccadilly prevent the river from flowing south to the Thames, forcing it to divert westward. We follow it by crossing Berkeley Street and exiting onto the pedestrianized Lansdowne Row. 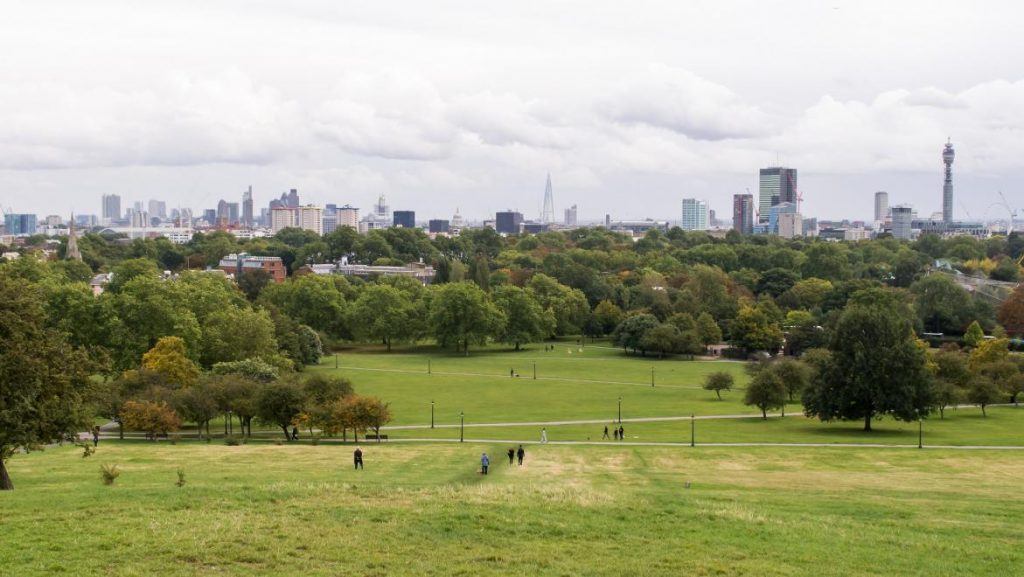 You’ll find lots of little stores and sandwich shops along this lane that was created by a paving over the river when it once served as the border between the two formerly aristocratic townhouses of Devonshire House and Lansdowne House. Shepherd’s Market Lansdowne Row turns into Curzon Street. Just past the Third Church of Christ the Scientist on your right, turn left into the gap at No 47, which will take you into Shepherd Market. Proceed to the King’s Arms pub and turn right.

The market, to which this medley of narrow streets, pubs and restaurants owes its name, must have originated on the riverbank at one time, as the westbound Tyburn bypass of Hay Hill changes back to southbound here and probably coincides with Carrington Street (second from your left), Yarmouth Place and the lower part of Brick Street. Carrington Street is a dead end (for good reason), so you’ll have to make a detour to get to the other two streets. Go a little further and turn left onto Hertford Street. 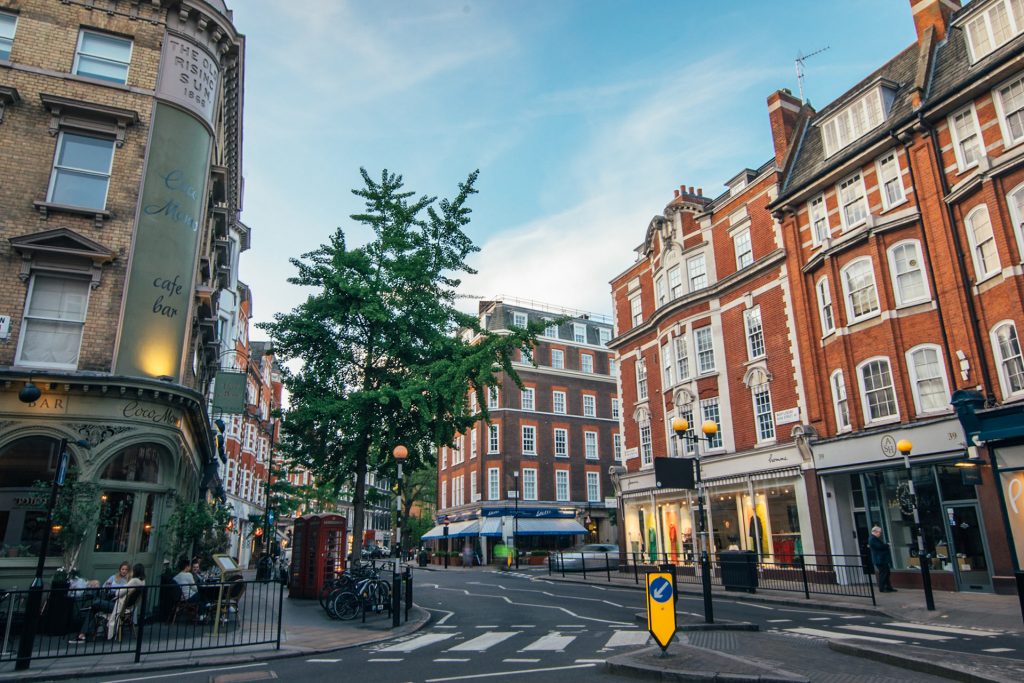 Turn right after her and at the first corner turn left onto Down Street. (The entrance to the now-defunct Down Street tube station is ahead on the right.) Turn left again onto Brick Street. Yarmouth Place is at the bottom of the hill on the left. Follow Brick Street, formerly Engine Street, and turn right into Piccadilly. That you are back at the site of the stream is confirmed by the rise of the street to your right and left.

The third bad place, unlike the first two, is not a square, but an intersection. More precisely, the pedestrian island near Marble Arch. Now it looks like this: 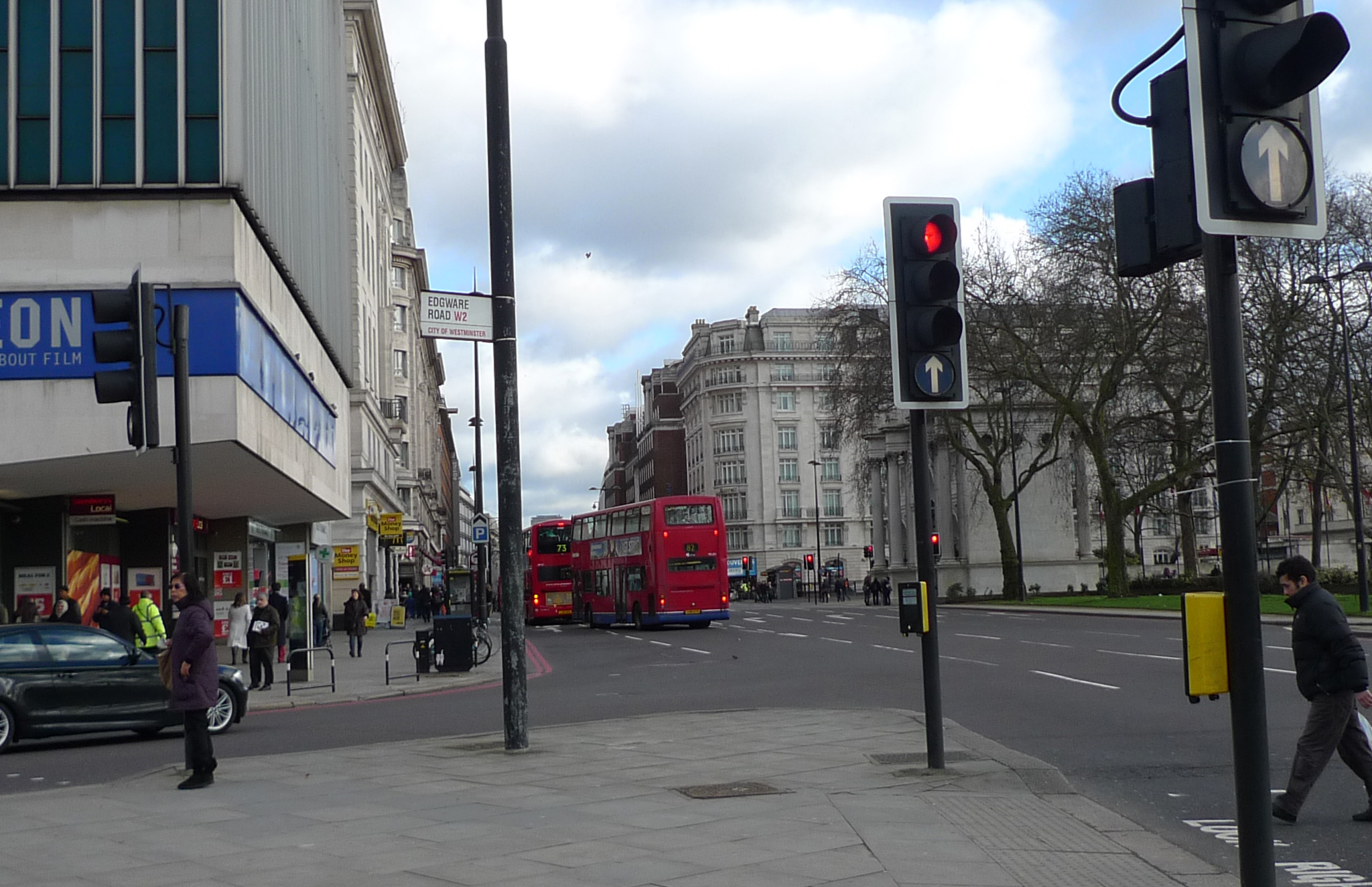 And in the mid-eighteenth century a large stationary gallows, the so-called “Tyburn Tree,” stood here. Opposite, as the plan shows, is the place “where soldiers are shot.”

READ
What is behind the mystery of Oak Island? Why hasn't it been solved yet? 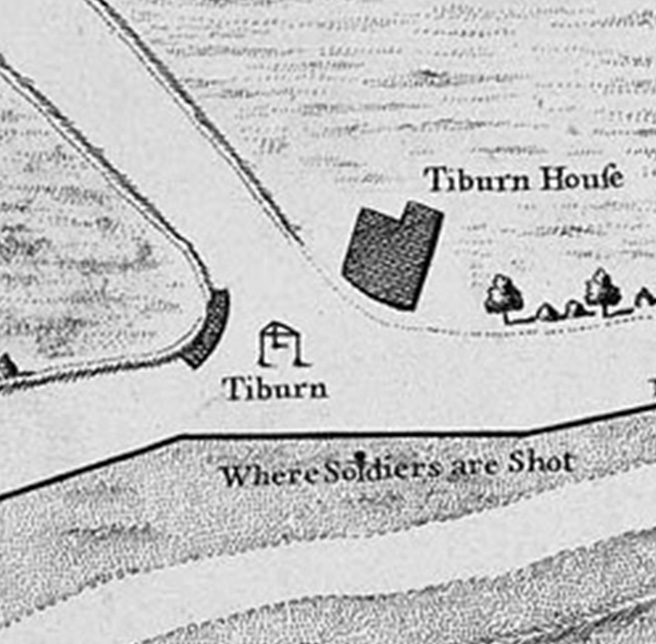 A memorial sign is rolled into the asphalt, but most passersby don’t notice it or don’t know at all what the Tybern Tree is. It might be a May tree or an oak under which the ancient druids used to dance in roundels. 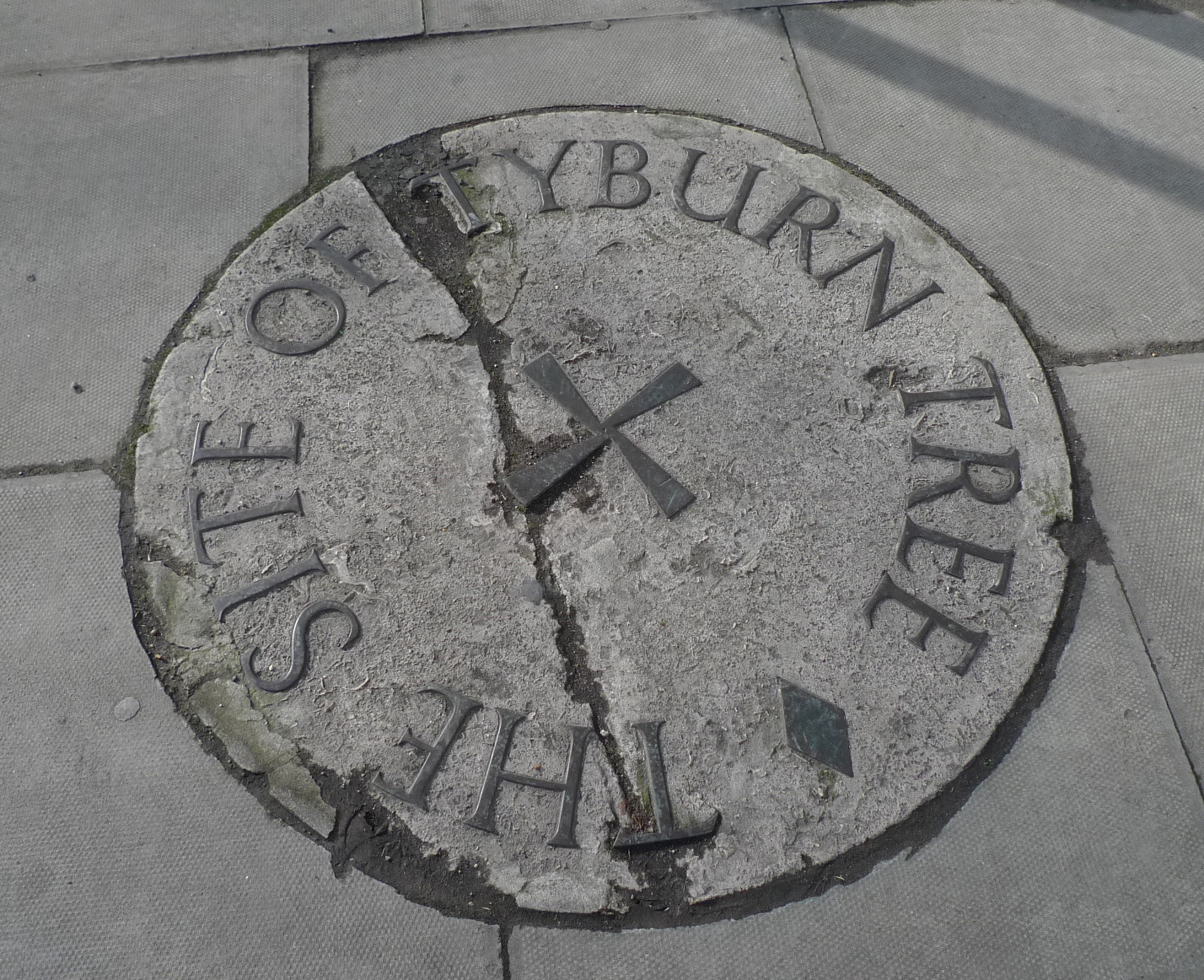 The highway passed by the gallows, and everyone who approached London received a visual warning: one should behave decently and not violate the laws in the capital. The “tree” at the same time accommodated up to 24 gallows. 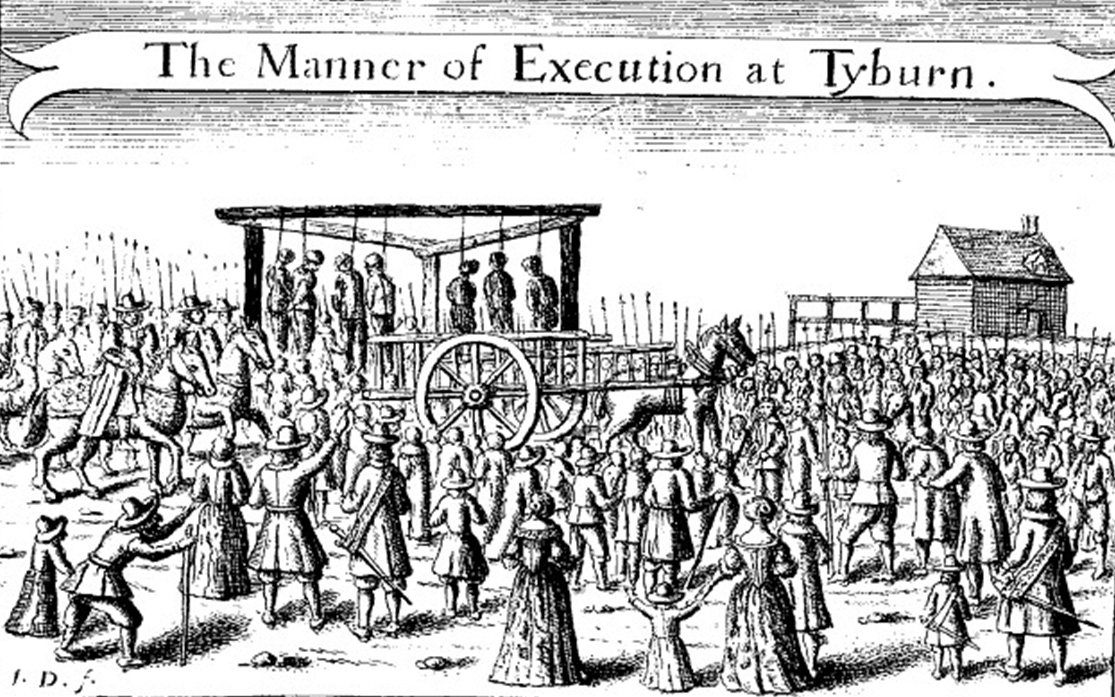 There was enough room…

The locals made a good business out of this neighborhood. During the interesting executions they built stands for spectators, sold drinks, and sold leaflets and pamphlets. The audience applauded the convicts who were brave and booed the cowardly ones. 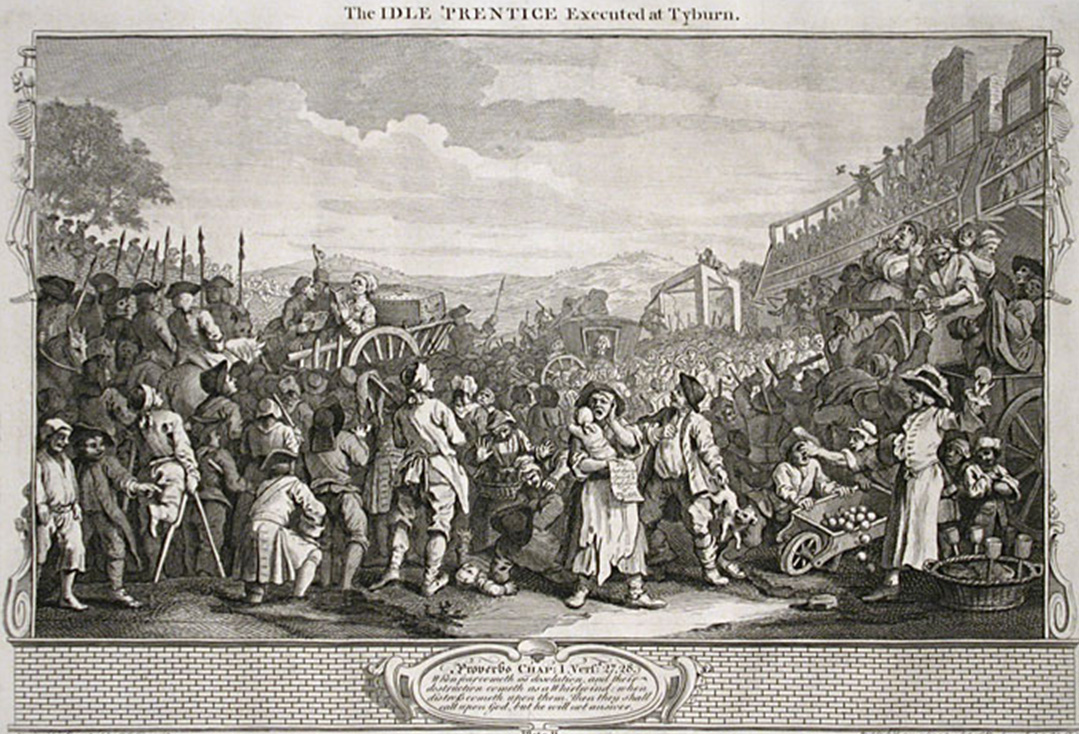 Thanks to William Hogarth, we know what it looked like.

The word “Tyburn” is firmly embedded in London folklore of the era. “To dance in Tyburn” meant “to go to the gallows”; “to ride in Tyburn” meant to go to the afterlife. Over the centuries, Tyburn was not much different from other such hotbeds of murder. Here they tortured the condemned with the usual medieval cruelty; they burned them in the fire for their convictions; they hanged them for petty offenses like pickpocketing; they did not hesitate to put to death juvenile offenders, for whom the law made no condescension (the notorious juvenile justice did not yet exist). However, there is an entirely British peculiarity that comes to your attention when you examine Tyburn’s list of “stars. For example, here are two executions that could not have taken place in any other country in the world at the time. In 1541, Baron Thomas Dacre and a company of fellow noblemen set out to hunt in a foreign land. When forest rangers tried to stop them, the poachers grabbed for their weapons. One of the rangers was killed. A trial took place that sentenced the lord and his accomplices to death. They were all hanged at Tyburn as common criminals – not even beheaded. For the murder of a lowly commoner, a highborn lord and three nobles paid with their lives. 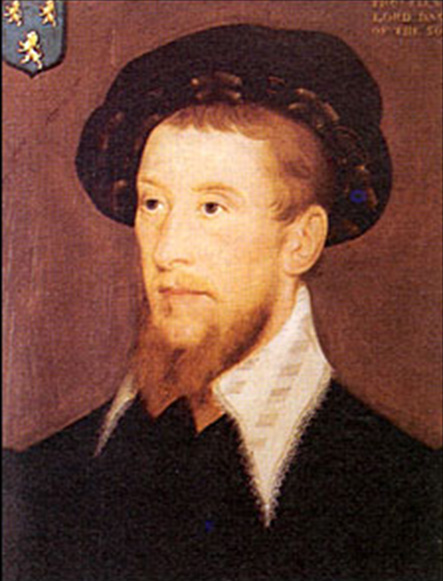 Lord Dacre is an important name in the history of British justice.

Just think: this happened in the year one thousand five hundred forty first (!) – that is in the time when in most European countries a peasant could be hunted down by hunting dogs just for fun. Our Ivan Vassilyevich was not even “formidable” yet, but only a nice boy who amused himself by executing cats and dogs.

About the same story happened in 1760. Count Ferrers, in a fit of rage, shot and killed his footman. Big deal. Our Saltychikha tortured 138 serfs to death in those same years before the courts got hold of her. And here a nobleman, a peer of England, was sentenced to the gallows for a mere trifle. The only privilege the earl had reprimanded himself and paid for out of his own pocket was a silk rope. On the day of his execution, his lordship arrived from the Tower at Tyburn in a patterned carriage, dressed in a silver-embroidered wedding gown. Gave generously to the executioners for tea. And hung around in the noose, on the most common of grounds. 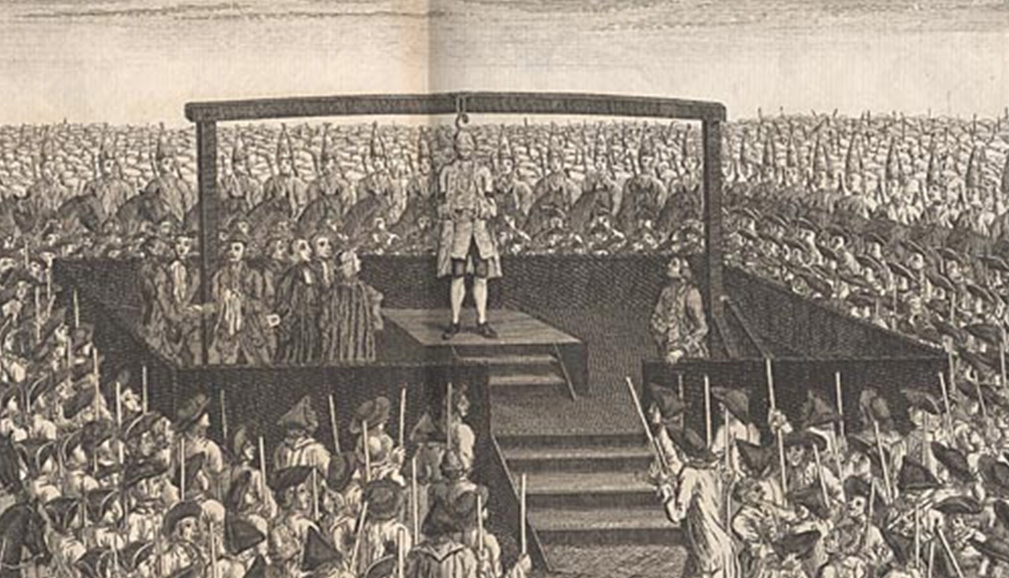 They also built a pedestal for the Count – out of respect for his title.

It seems strange to extol democratic values on the example of the equality of all before the gallows. I don’t intend to do that. But reading about the lords being hanged for killing plebeians makes you understand why England is a special country. The idea of the inalienable rights of the individual was established here earlier than in other parts of the world. That’s why the British have had a good sense of dignity for a long time. I wonder, do we really have to go all the way back to the beginning? First the Magna Carta, then Cromwell and the Glorious Revolution, then the Luddite and Chartist movements… Boredom, ladies and gentlemen.